The Best Original 80s ThunderCats Toys And Their Value In 2022

In 1985, ThunderCats entered a children’s cartoon arena that was already quickly becoming competitive. With its cool character designs, action-packed stories and dense lore, however, ThunderCats quickly carved out its own niche and gained a legion of fans, who rushed out to purchase ThunderCats toys.

Today, we’re looking at the ThunderCats toys that have remained in the hearts of fans – and how much they sell for on the resale market in 2022! 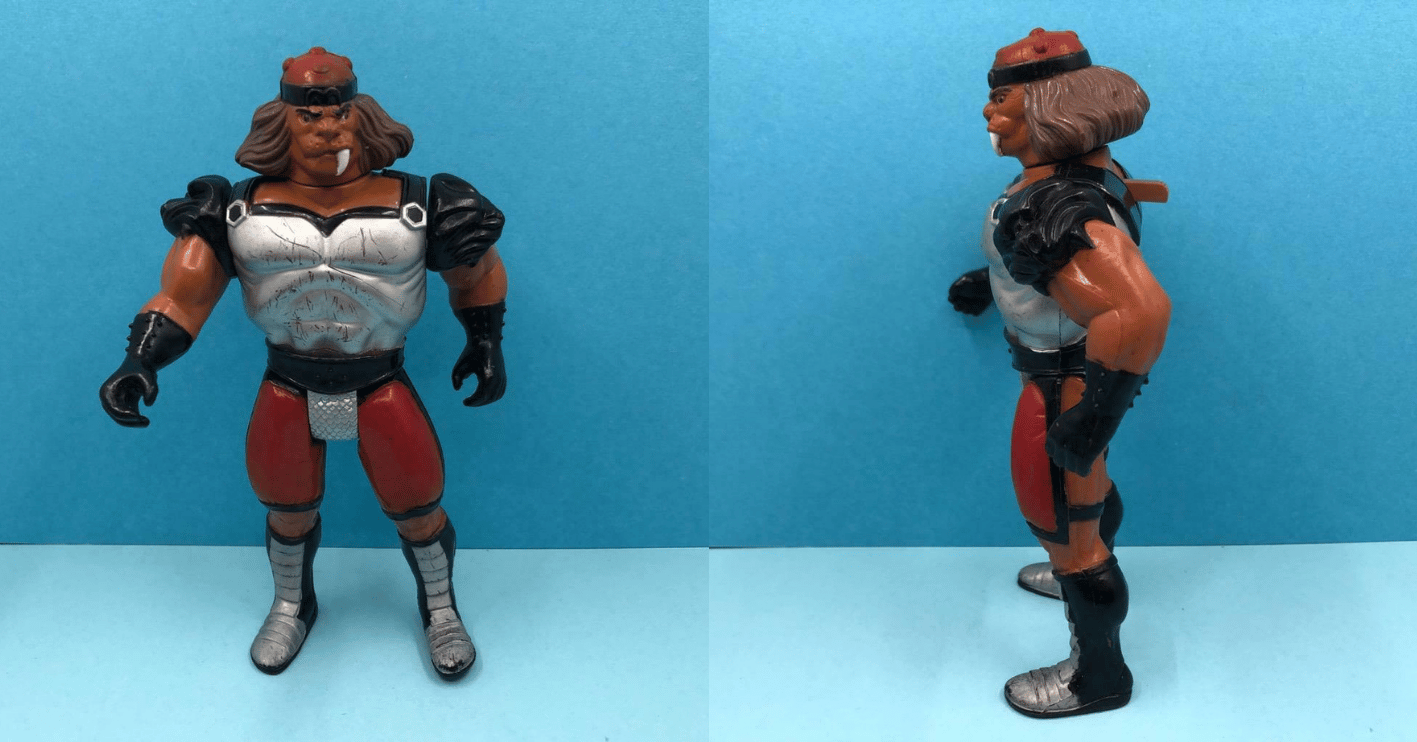 It’s an undeniable truth that in most kids’ media, the villains end up far less popular than the heroes. However, when it comes toys, villains are absolutely crucial for play – as they create the conflict that drives the stories. That’s how Grune, a former Thundercat who betrays his allies to instead lead a band of marauders, can become one of the most popular characters in the 80s toyline.

Grune outsold almost all the other characters in the main cast, but unfortunately, this popularity means that he’s not worth much on the resale market, usually selling for around $14. 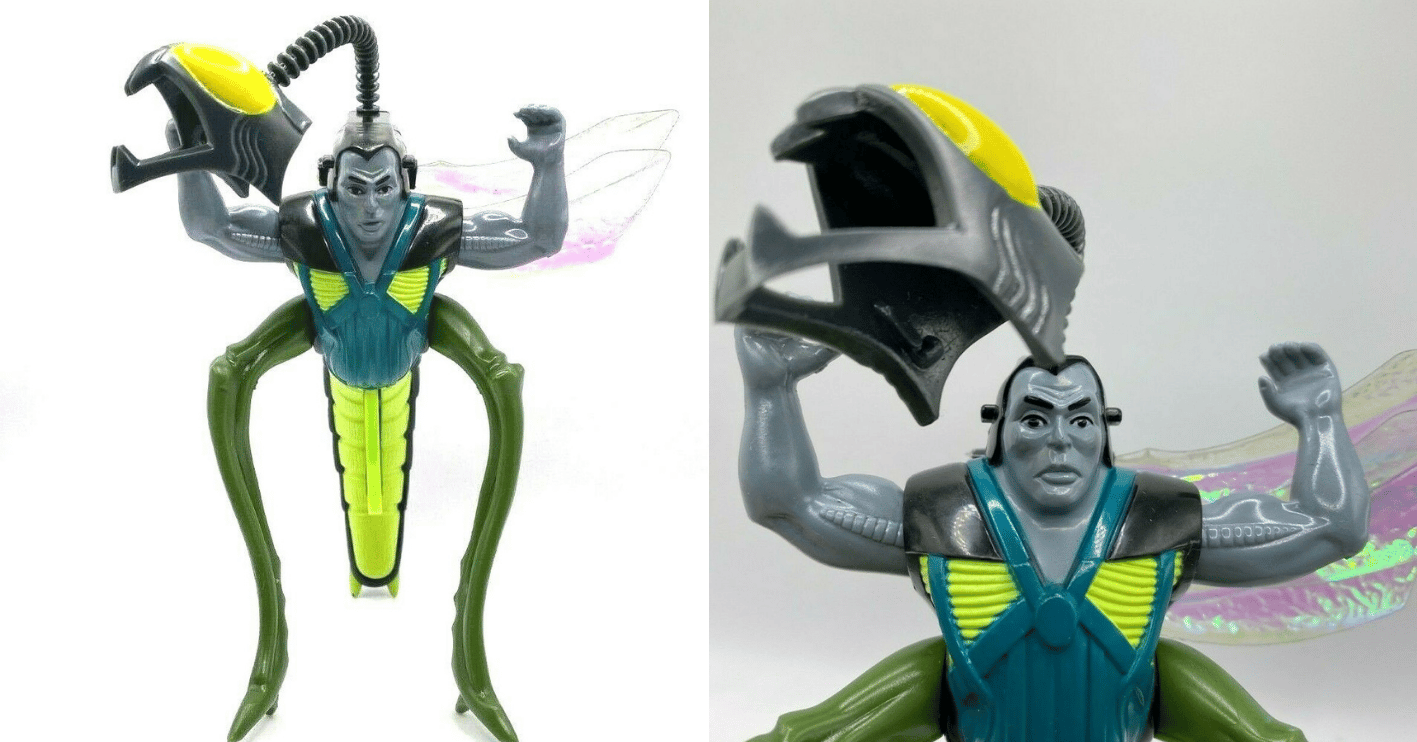 The series might be called Thundercats, but some of the show’s most popular characters aren’t cats at all. The Stinger is part dragonfly, part human and part robot, and is able to fly as well as do serious damage to the show’s heroic cast. The novelty and pure weirdness of this character is no doubt what made him a must-have toy in the 80s, as what other toy looks like this?

The Stinger action figures are some of the most expensive to purchase secondhand, as they start at around $358 on the resale market. Not only that, but they are pretty difficult to find, as not many of them still exist in circulation. 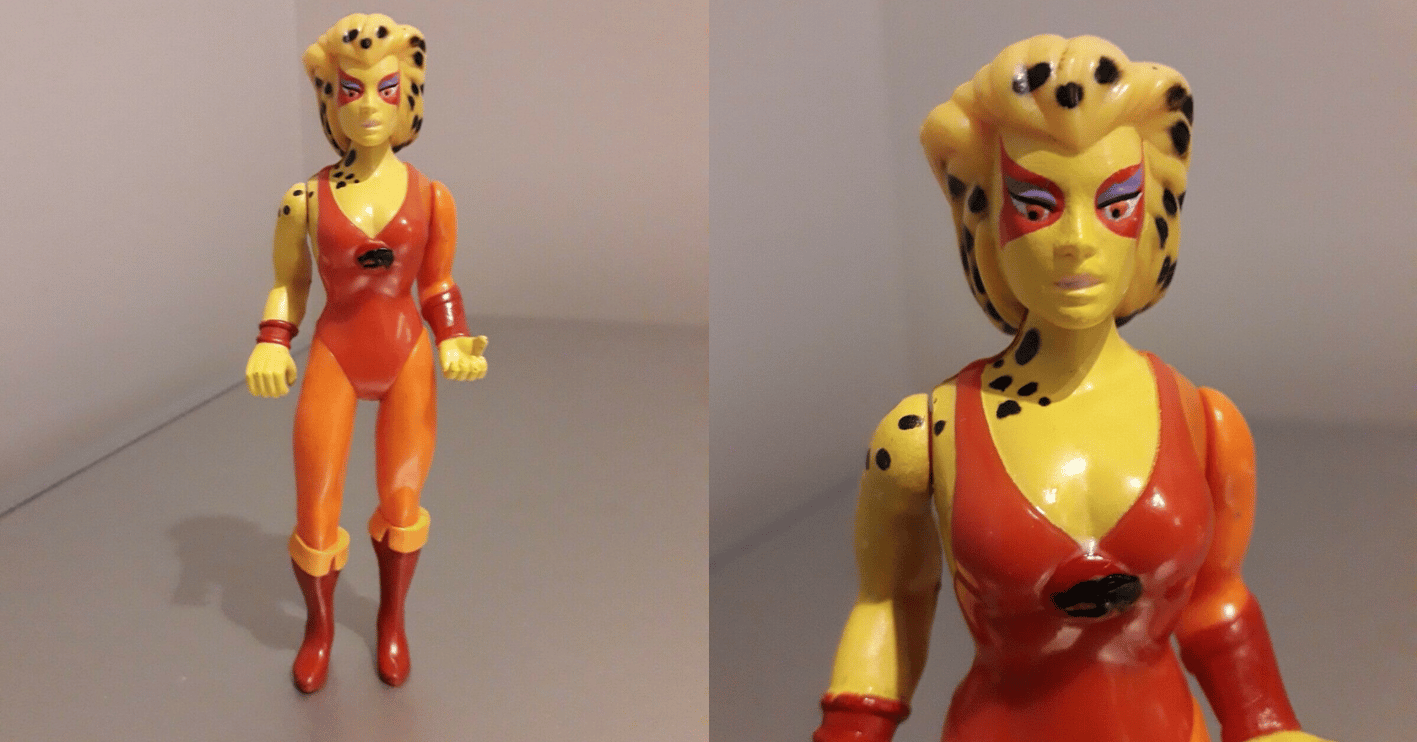 Cheetara the Swift is one of the most powerful characters in all of Thundercats. Not only can she run at superhuman speeds, but she can also see into both the past and the future, and has an instinctual ability to sense dangerous people and situations. On top of all that, with her red bodysuit and cheetah spots, she’s undoubtedly one of the coolest-looking cats out there.

Cheetara is a beloved character, but that popularity means that she is relatively easy to find on the secondhand market. That combination of factors means that a Cheetara sits somewhere around $47, though some are known to sell for as high as $167, depending on the condition. Every group of superhumans needs a home, whether it’s Avengers Tower or the Batcave. For the Thundercats, that home is The Cats’ Lair, a home/base of operations that they build on every new planet that they arrive at. Usually featuring a control room, a hangar for vehicles, a library and a war room in addition to living quarters, it’s an awesome location that kids obviously wanted to play with.

Cats’ Lair playsets don’t go on sale as often as individual characters, but if you’re in the market, you can expect to pay between $90 and $114 for one without a box. As for the box itself, that alone will cost you an additional $11. 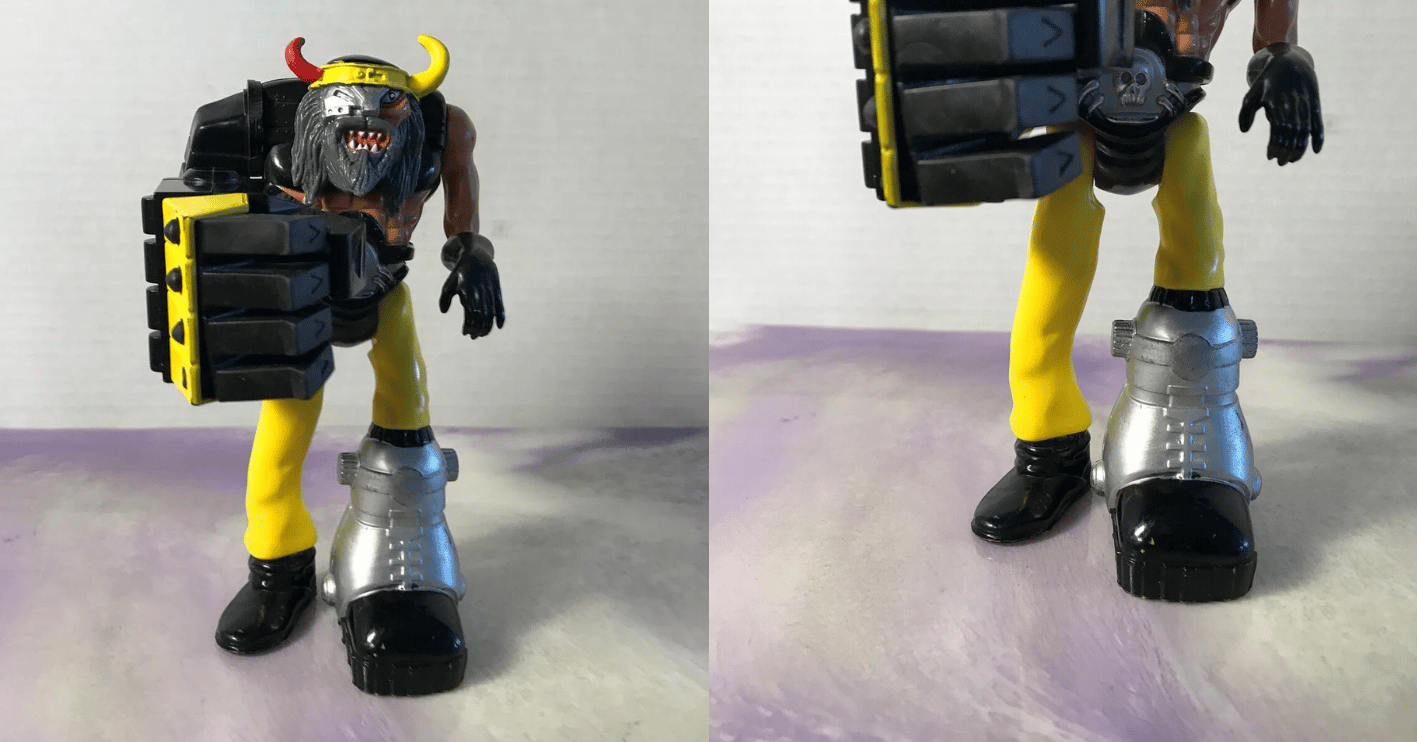 From the title, you would expect the Thundercats universe to be made up primarily of cats, but nothing could be further from the truth. It encompasses all manner of creatures, including half-robot, half-human pirates like Hammerhand. Hammerhand is a dangerous villain obsessed with creating chaos on Third Earth, which is why he was so fun to play with.

80s Hammerhand action figures usually sell for between $47 and $95 on the secondhand market, with an average price of $71 depending on the amount of visible wear and tear. 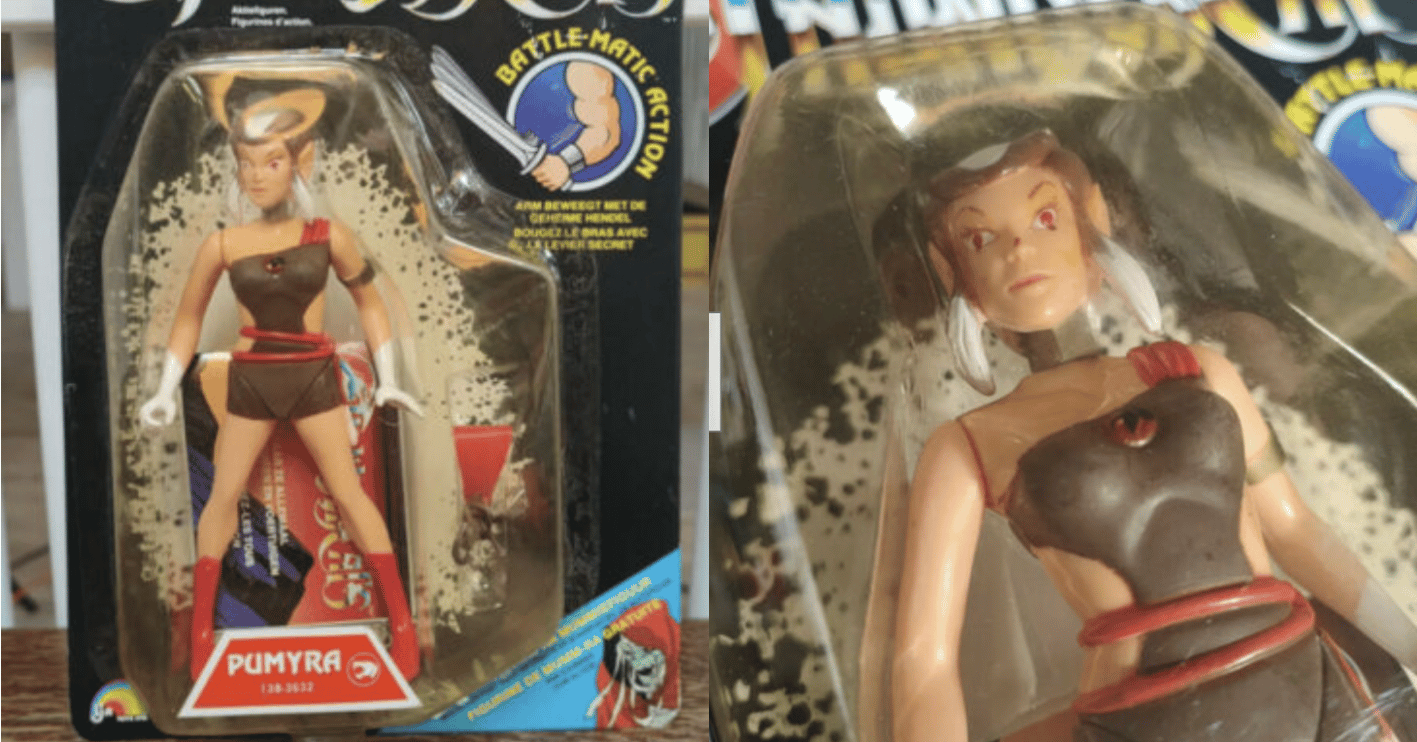 As one of the three refugees who escaped the destroyed planet of Thundera, it’s fair to say that Pumyra is a pretty important part of the Thundercats clan. She also has the ability to leap great distances and heights, making her absolutely indispensable when it comes to play.

An original 80s Pumyra is pretty hard to come by, so you can expect to pay premium prices, with boxed Pumyra’s selling for over $4,180 on the secondhand market. Later editions have a steep dropoff in value, often selling for just $53 even when still in the box. 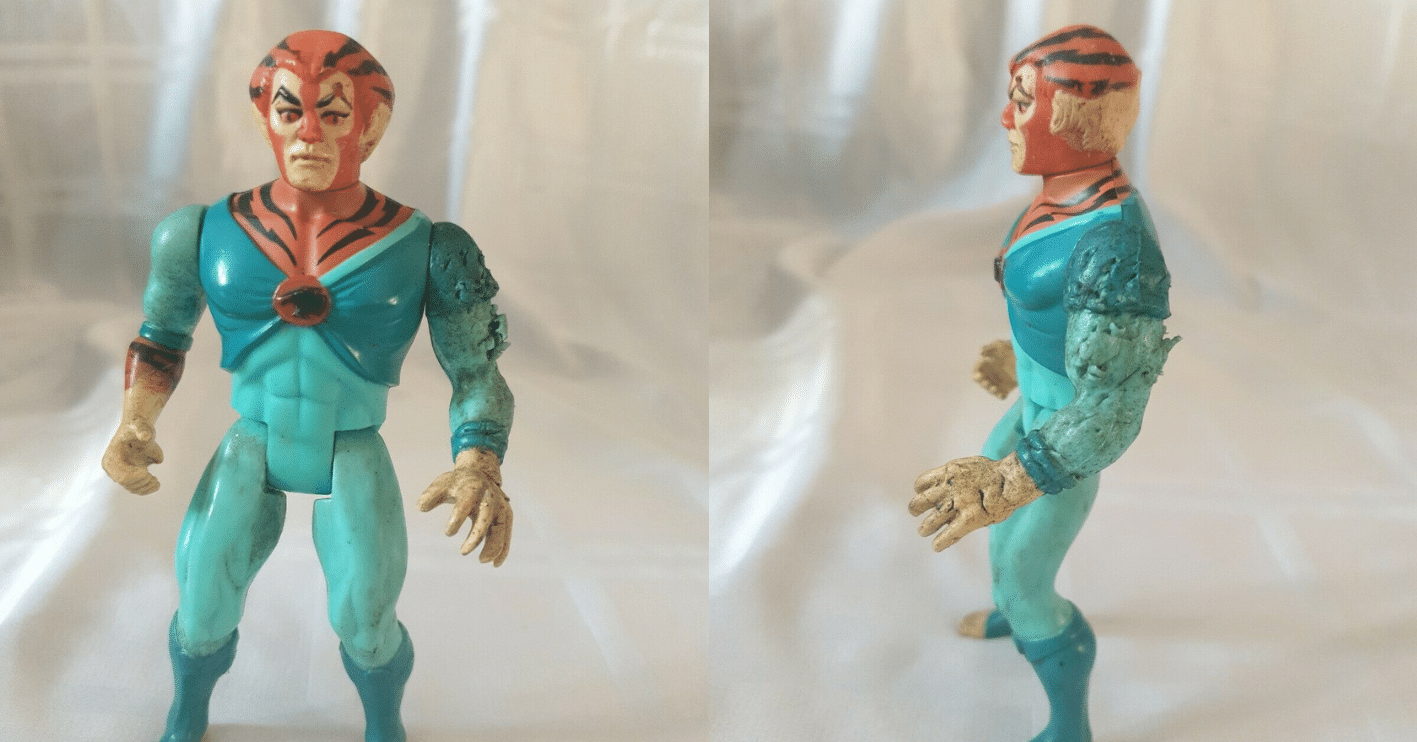 Tygra is the quintessential Thundercat, there’s no doubt about that. Not only is he the head of the Thundercat council, but he’s next in line to be Lord of the Thundercats, making him the de facto second in command. Not only that, but his awesome stripes and fearsome muscles make him one of the coolest characters in the show.

Given his coolness, it’s actually pretty surprising that original 80s Tygra action figures only retail for between $14 and $21 on the secondhand market, depending on condition. 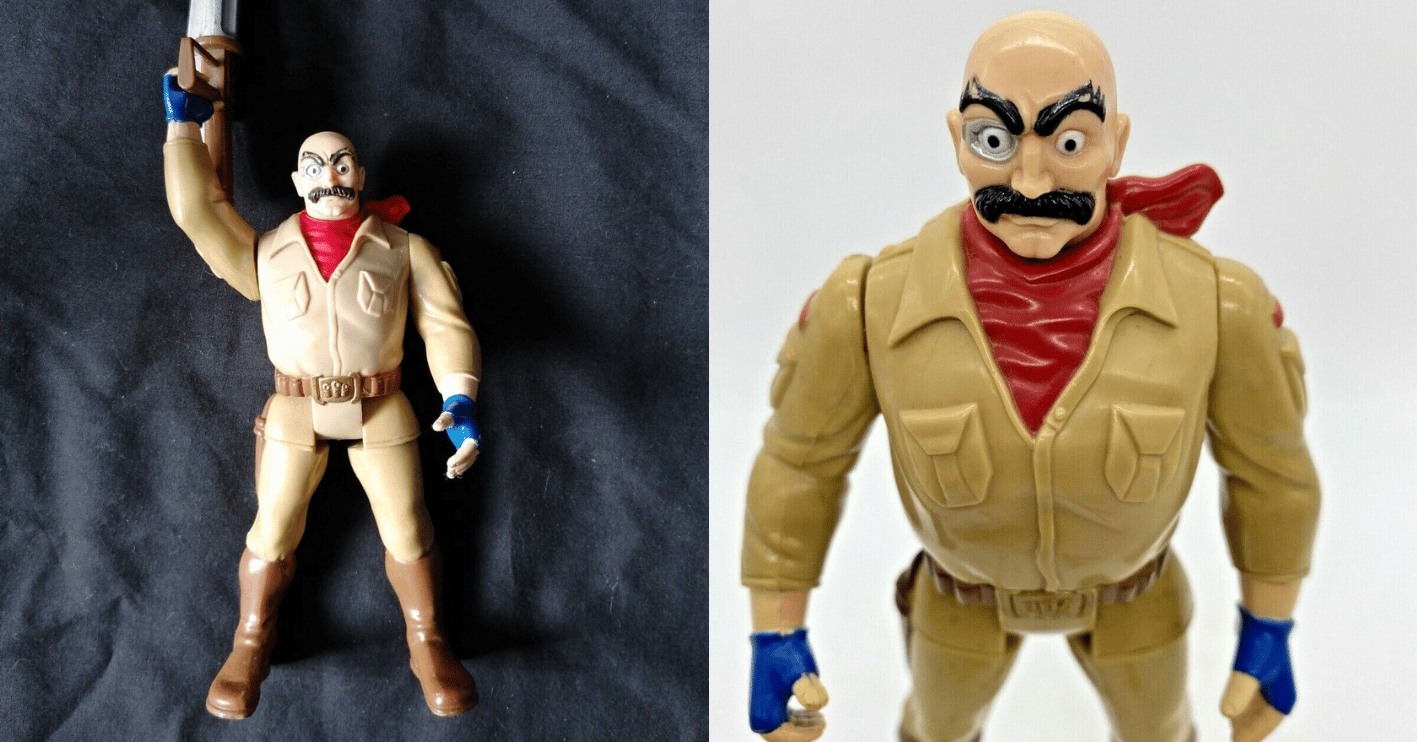 Safari Joe might seem pretty silly, but don’t let the goofy name or space-age monocle throw you off, he’s actually a ruthless intergalactic bounty hunter. His entire mission in life is to hunt the Thundercats and complete his mission of eradicating all the various cat races – which makes him pretty fearsome indeed.

As a rarer and less popular character, Safari Joe action figures are more valuable than the average Thundercats toy, selling for a minimum of $52 on the collectors’ market and often selling for up to $131. Happy hunting! 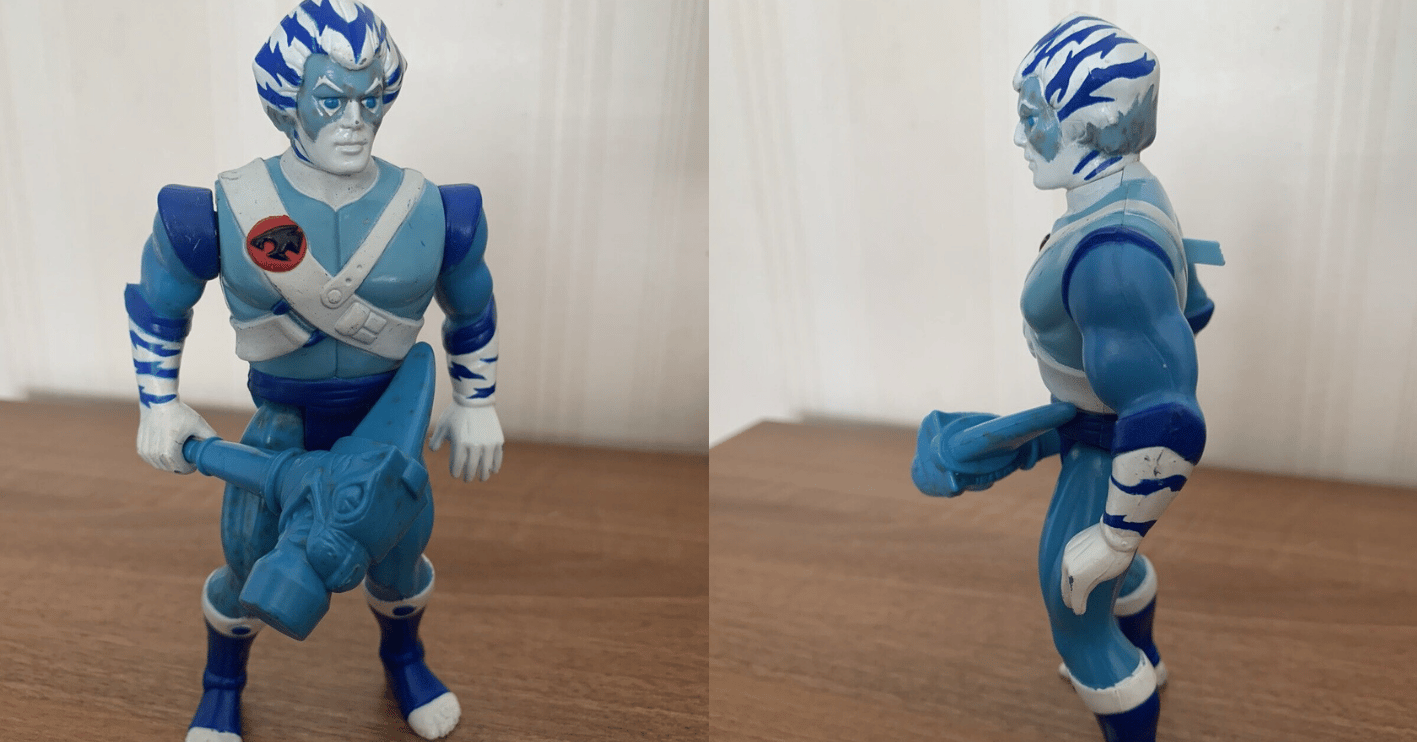 Bengali may have joined the Thundercats later than central members like Tygra and Cheetara, but that doesn’t make him any less important. Not only is he a skilled blacksmith, but he’s also an excellent fighter, as well as the cousin of Tygra. As well as that, but his blue fur made him both instantly recognisable and beloved.

Original 80s Bengali action figures are pretty difficult to come by, with the price starting out at around $209 on the secondhand market. However, some ultra-rare graded versions of the toy can sell for a whopping $4,419! 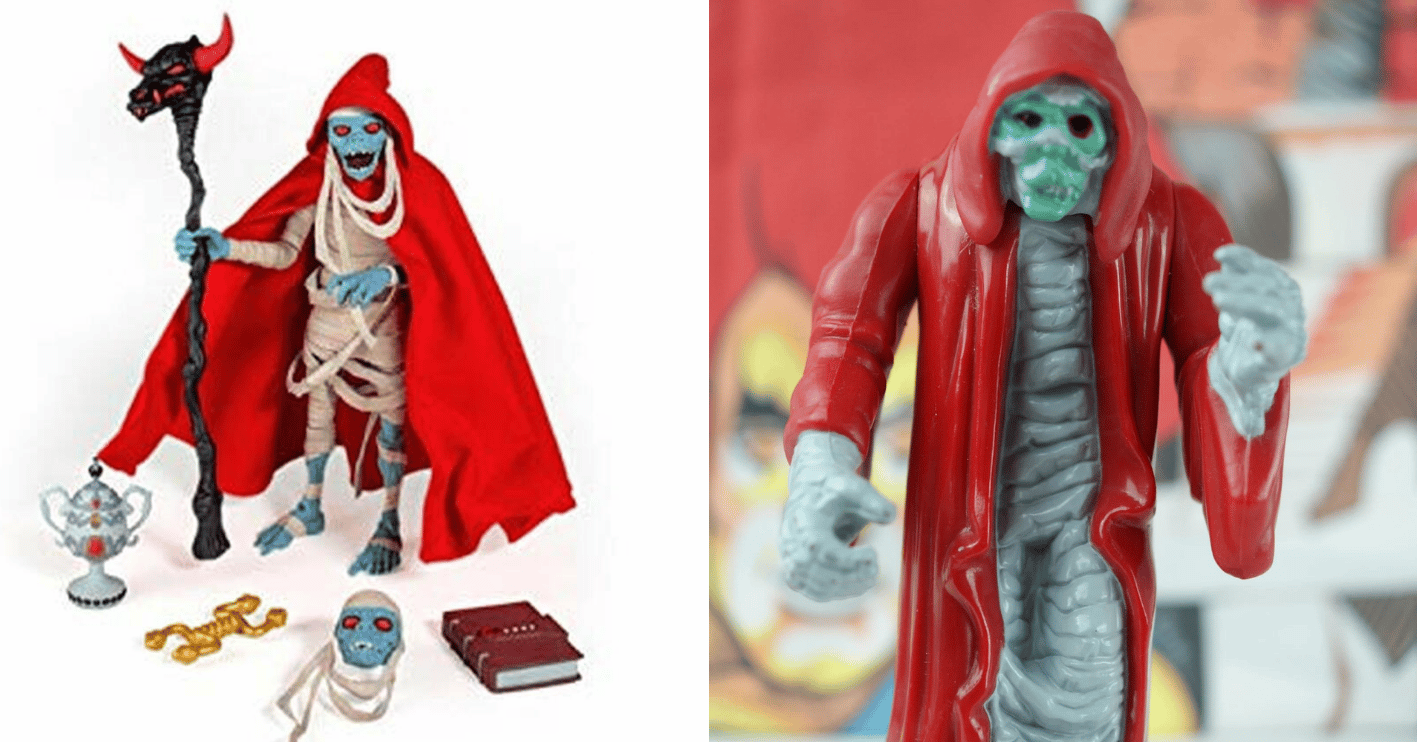 Mumm-Ra is the most legendary of all the Thundercats’ villains. As an undead demon priest with an encyclopedic knowledge of all things black magic, it’s no surprise that the Thundercats find themselves outwitted and overpowered by him again and again. Also not surprising is how popular his character is with fans, given his striking and unique look.

As a result of his popularity, standard 80s Mumm-Ra action figures only sell for around $14 on the secondhand market. However, examples of the Ultimates Action Figure version that are still in the box start with a price tag of $102, so it all depends on which version you find. 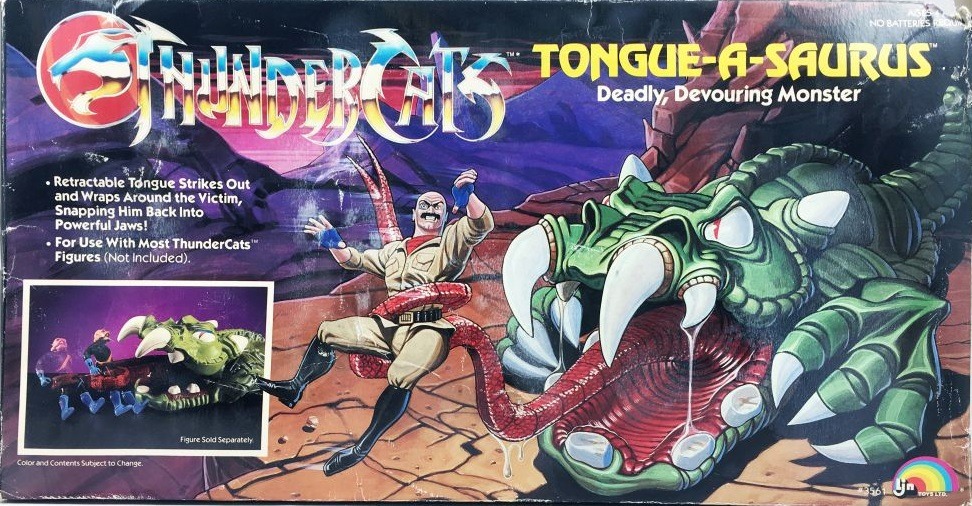 Tongue-a-Saurus is a giant amphibious creature that lives in the terrifying River of Despair. It is easily big enough to swallow several Thundercats at once, which is part of what makes it such a good idea for a playset. The other part is the crazy extended tongue that can physically grab the Thundercats and pull them into its jaws.

Despite playsets often being significantly more expensive than action figures, the Tongue-a-Saurus toy is actually relatively cheap, with a starting value of $59 on the secondhand market when the box is included. Playsets without the box run even cheaper than that. 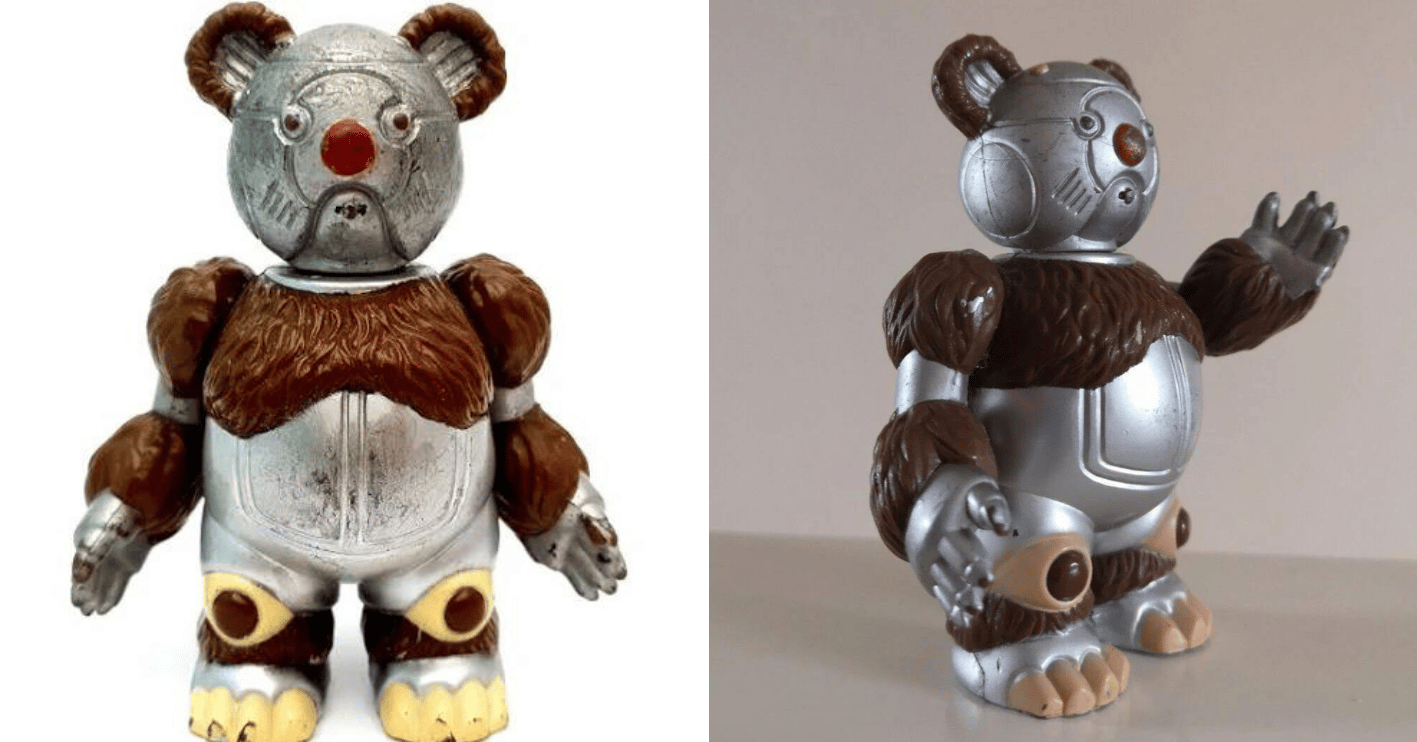 At first glance, the Berbils do not look like they belong in the Thundercats universe. However, these gentle, pacifist bears migrated to Third Earth in the distant past, and have crossed paths with the Thundercats on many occasions. They’re also, let’s face it, downright adorable, so it’s no surprise that kids wanted their own to complete their collection.

Original Berbil Bill figures only retail for $40 secondhand, but, fun fact: Berbil Belle, the female version, has a starting price of $51! Not only that, but the Berbil Belle price can sometimes reach $101. It’s either because her colour scheme is cuter, or just because she’s more popular! 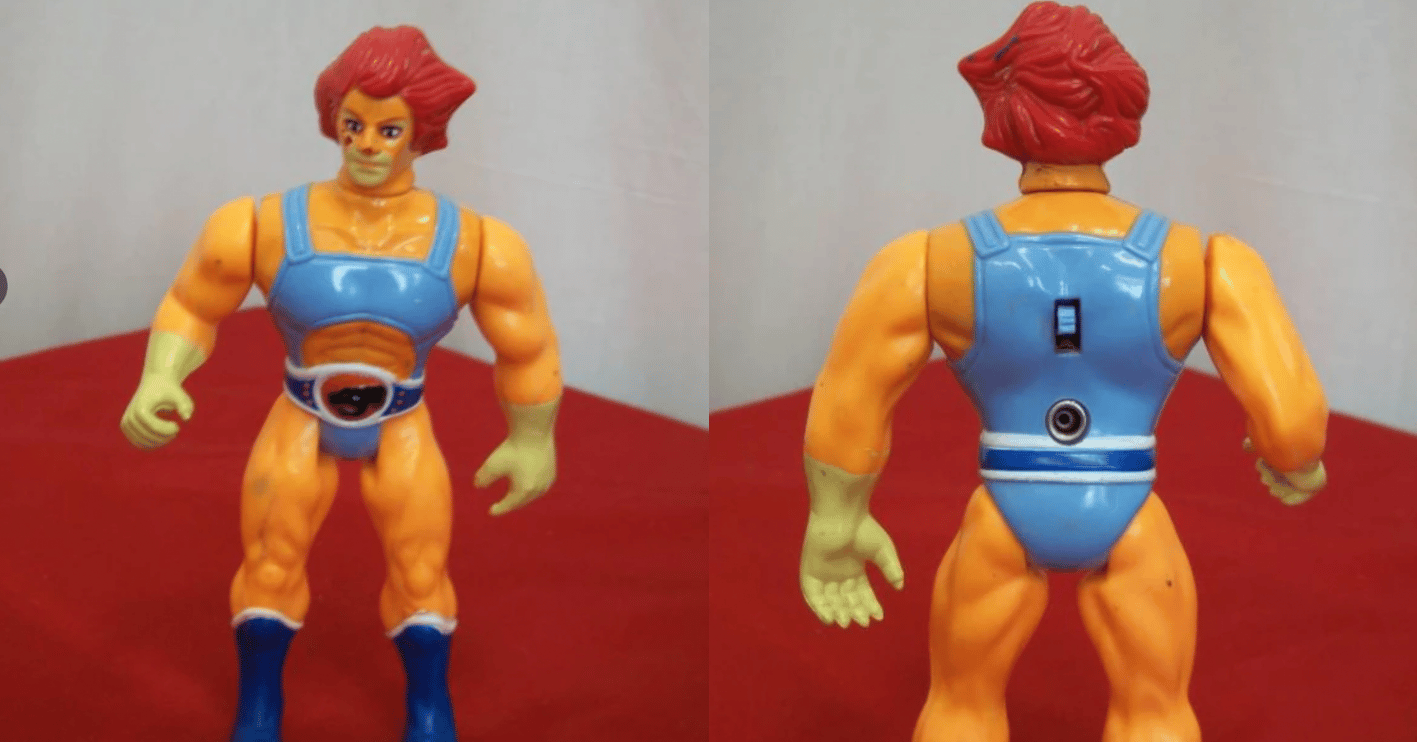 When it comes to Thundercats, there’s no question who the coolest cat of them all is: it’s Lion-O. As the Lord of the Thundercats and the son of the previous Lord, the responsibility of protecting the whole Thundercat clan lays firmly on his shoulders. Massively strong, agile and intelligent, it’s no wonder that kids everywhere wanted to rush out and buy his action figure after the show was released.

As for price, original 80s Lion-O action figures tend to retail for between $35 and $47, even without the box. Even damaged Lion-O figures that are missing a limb tend to be listed for $23, proving that Lion-O is ready to battle no matter what! 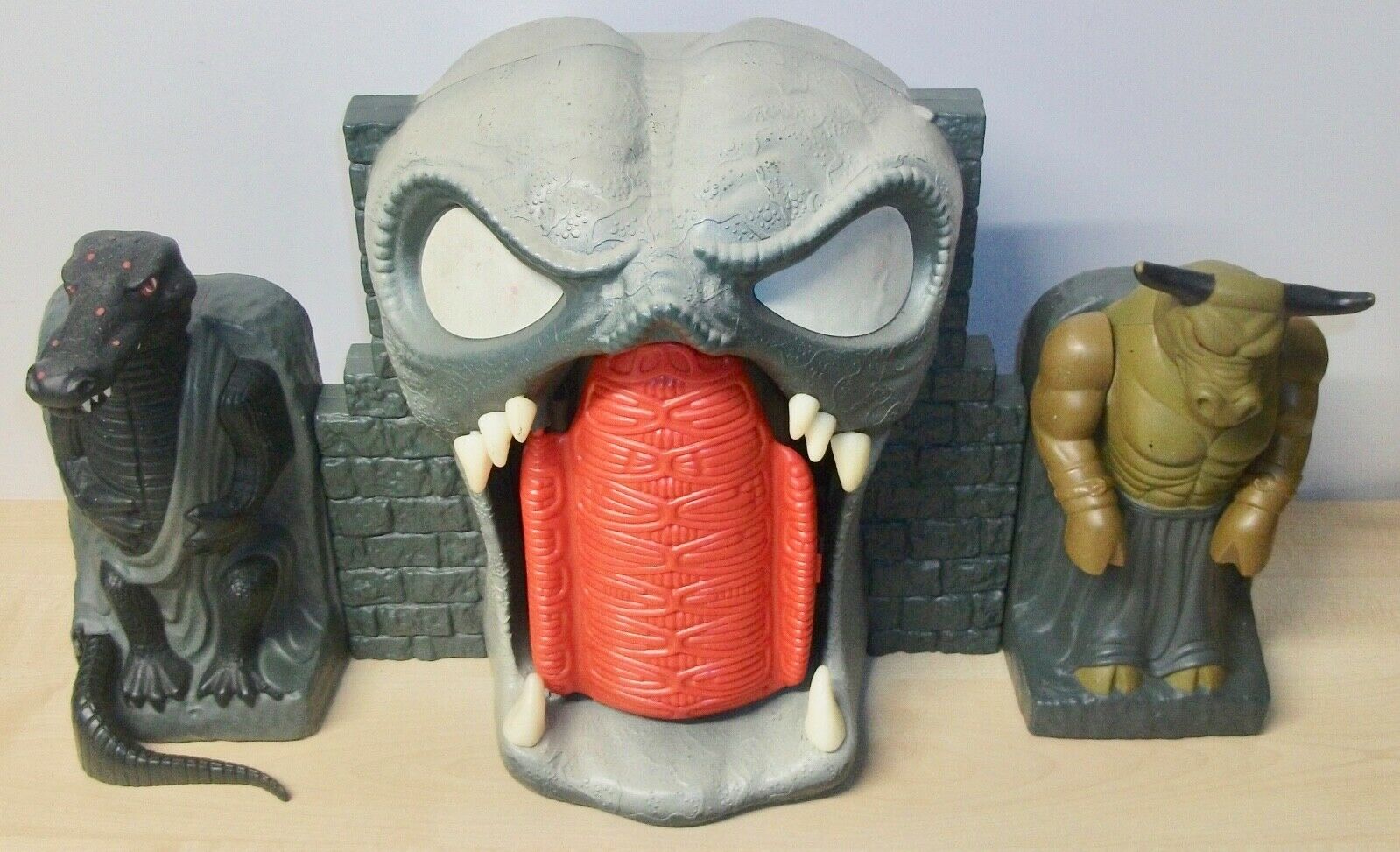 Something that’s common across a lot of 80s children’s properties is that the villains have lairs that are absolutely awesome. Mumm-Ra is one of the coolest villains in the whole Thundercats universe, and so it makes sense that his lair, the Tomb Fortress, is also absolutely sick. The Tomb Fortress playset is the second-largest Thundercats toy ever made, and features glow-in-the-dark teeth and eyes, as well as a transformation chamber.

Mumm-Ra Tomb Fortress playsets don’t end up on the secondhand market very often, but when they do, they tend to retail for $416 minimum. That makes this playset one of the most valuable pieces of Thundercats merchandise out there. 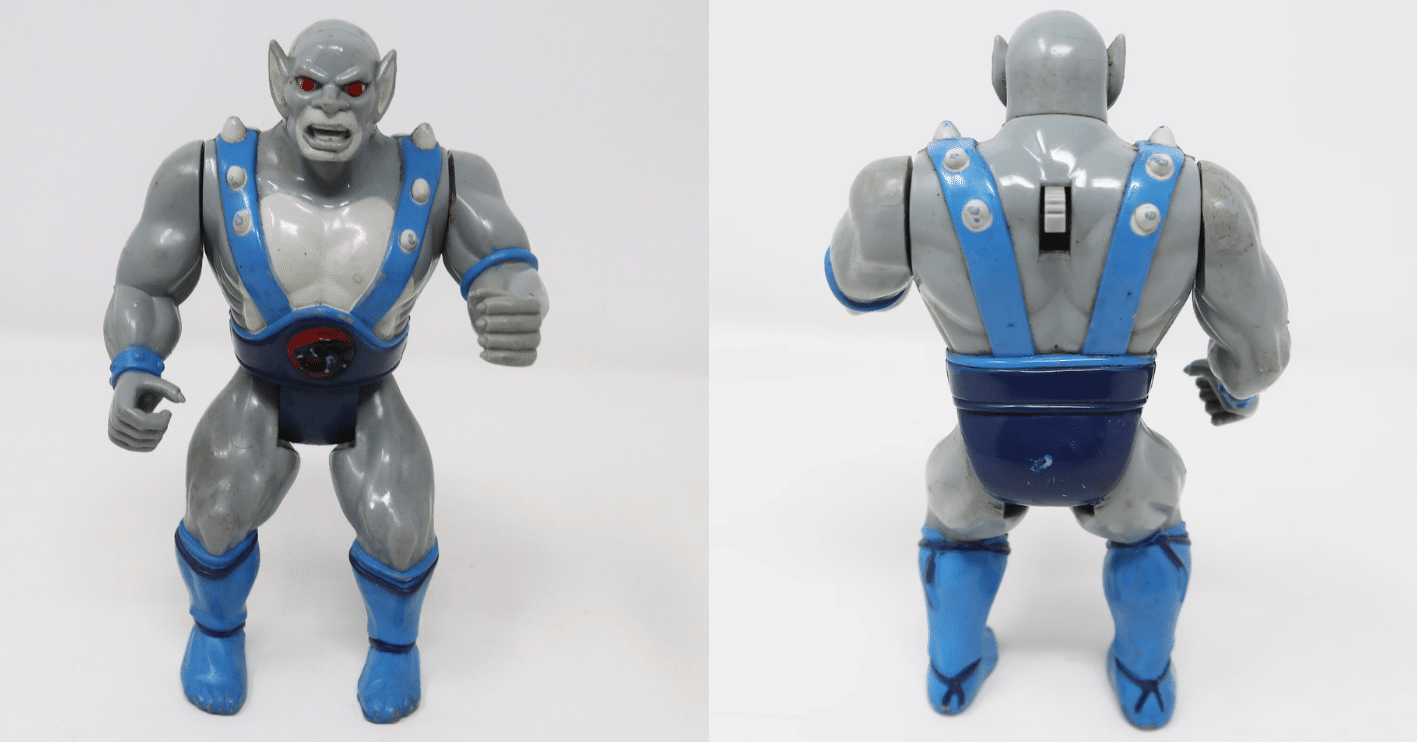 At first glance, Panthro looks more like a villain than a noble Thunderian, because nothing about his hairless form, grey skin and bat-like ears is evocative of a cat. However, before Lynx-O shows up, Panthro is actually next in line to be Lord of the Thundercats, and he is ironically pretty terrified of bats.

Panthro doesn’t have the fanbase that a lot of other Thundercats characters have, but there also isn’t a crazy amount of scarcity when it comes to Panthro action figures. As a result, original 1985 Panthro figures only sell for between $20 and $25 on the secondhand market, though when accessories are included that price can increase significantly.