Arnold Schwarzenegger Owns the Tank He Drove in the Army

Arnold Schwarzenegger has always been larger than life. It’s not so surprising, then, that when he served in the army in his native Austria, Arnie took a special interest in that most mighty of vehicles: the tank.

Before he moved to the US to enjoy massive success as a bodybuilder, movie star and politician, in 1965 Arnold began his national service in the Austrian military, aged 18. Required by law to serve for a year, Schwarzenegger opted to train as a tank driver. Arnie’s days in the tank saw no shortage of misbehaviour on his part, but so great is his love for the vehicle, he now owns the very model he trained in. 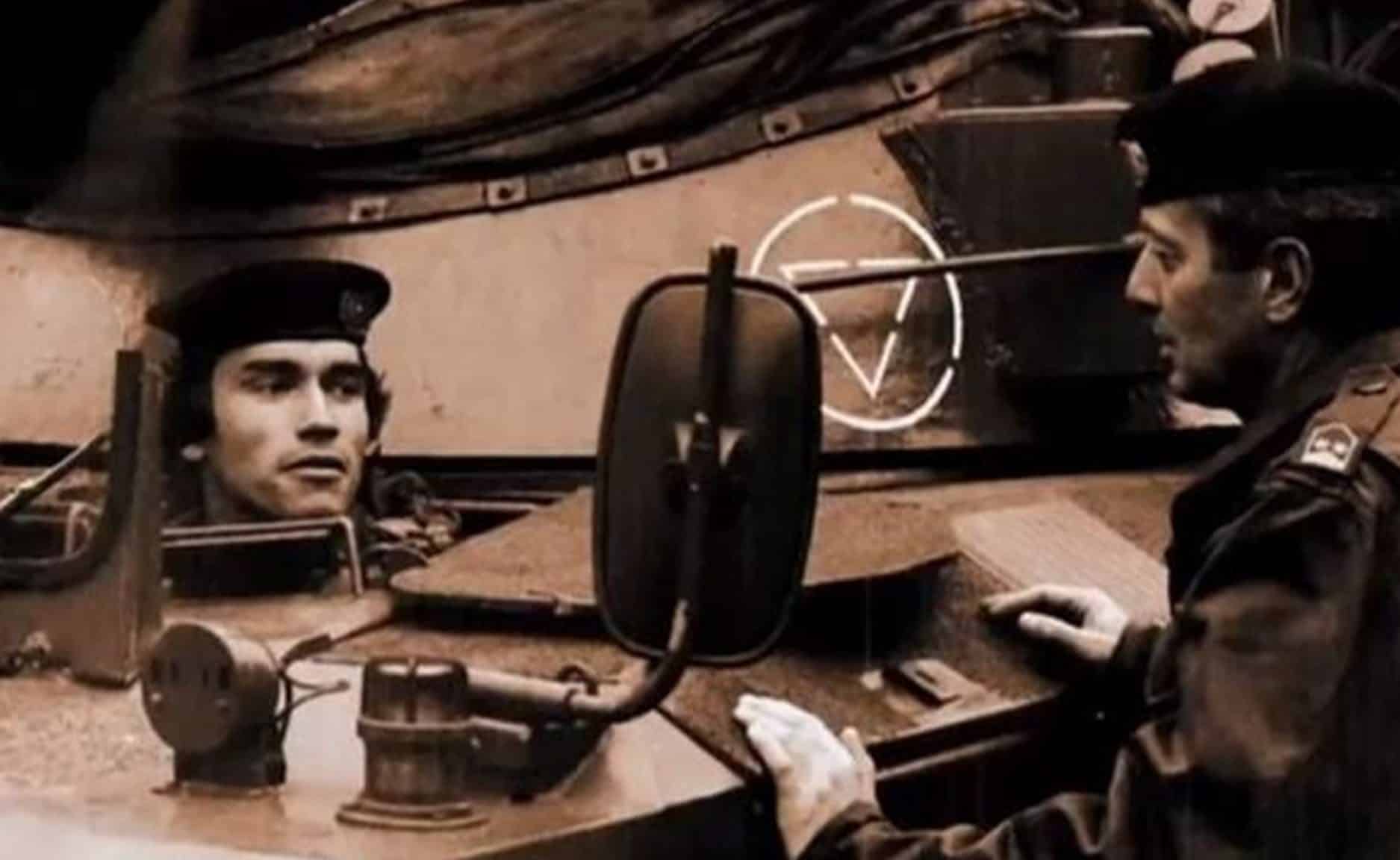 Born in Thal, Austria on 30 July 1947, Arnold Schwarzenegger grew up in the wake of the Second World War whilst his home country was still occupied by the British military. Schwarzenegger says his “fascination with tanks and big trucks” was due to frequently seeing such vehicles passing his house during childhood, and enjoying friendly relations with British soldiers.

Austria signed a declaration of neutrality in 1955, but it was still mandatory for all adult men to serve a year of military service (today, this has been reduced to six months). Schwarzenegger opted to do so straight after turning 18 in 1965, and he immediately had one specific role in mind: “I said, ‘I want to be a tank driver.'” 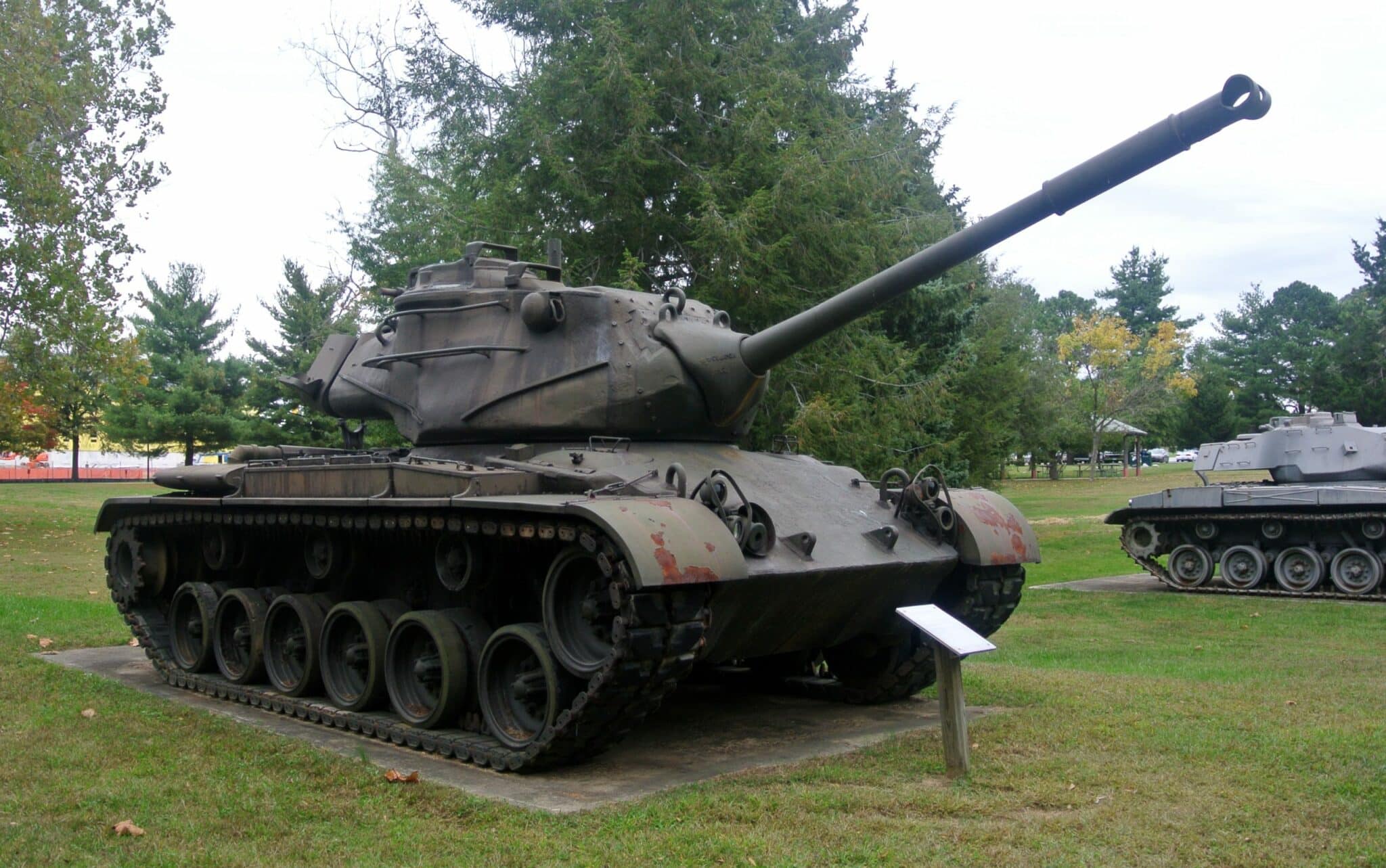 Schwarzenegger was trained to drive an M47 Patton tank. Numbered 331, the model was built by the US for use in the Korean War, and was later given to Austria. 50 tons in weight, 28 feet in length and 11 feet in height, it’s a considerably heftier vehicle than most teenagers find themselves behind the wheel of.

Looking back, Schwarzenegger reflects, “I was an 18-year-old kid, still really not ripe enough I would say, to take on the responsibility of a 50-ton tank. But there I was, I was going through tank driving school, I passed easily, I was very very excited and enthusiastic, studied everything about the tank. Then I had my own tank, I started driving the tank, it was wonderful.” 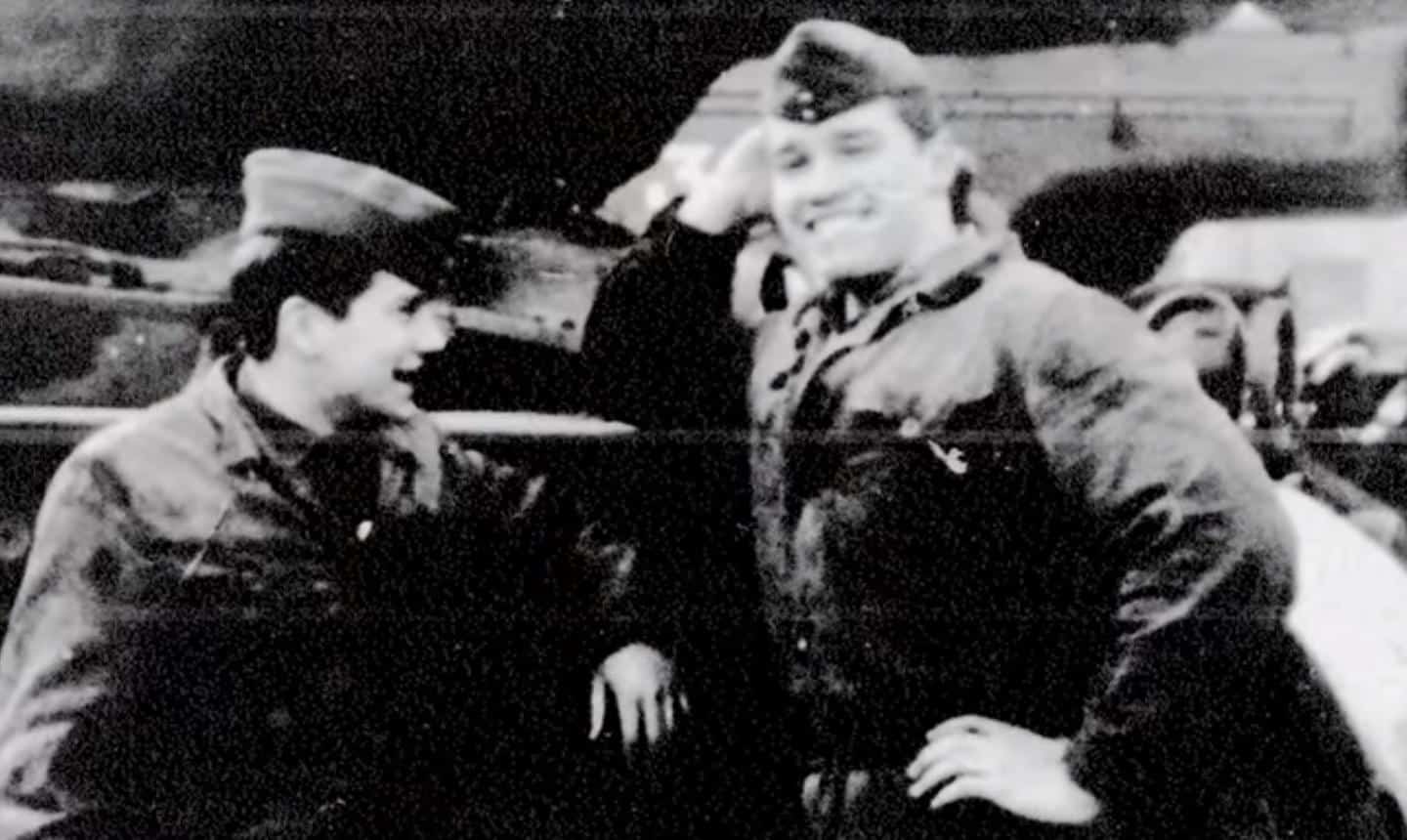 Despite his eagerness, “there were accidents that happened. One of them for instance was, I was inside the garage and did my daily routine of warming up the tank… I ran this engine and somehow I [accidentally] got into reverse gear. The tank started shaking, and I say to myself, ‘this is kind of odd’…

“Then all of a sudden I felt dust coming down from the top. Then all of a sudden I felt water. Then I smelt gas.” The 18-year-old Arnold was stunned to discover he had “literally ran with my tank through the building, through the wall, and broke the gas pipes and the water pipes and everything that was there, and bricks were coming, falling down… I realised that I was in deep trouble.” 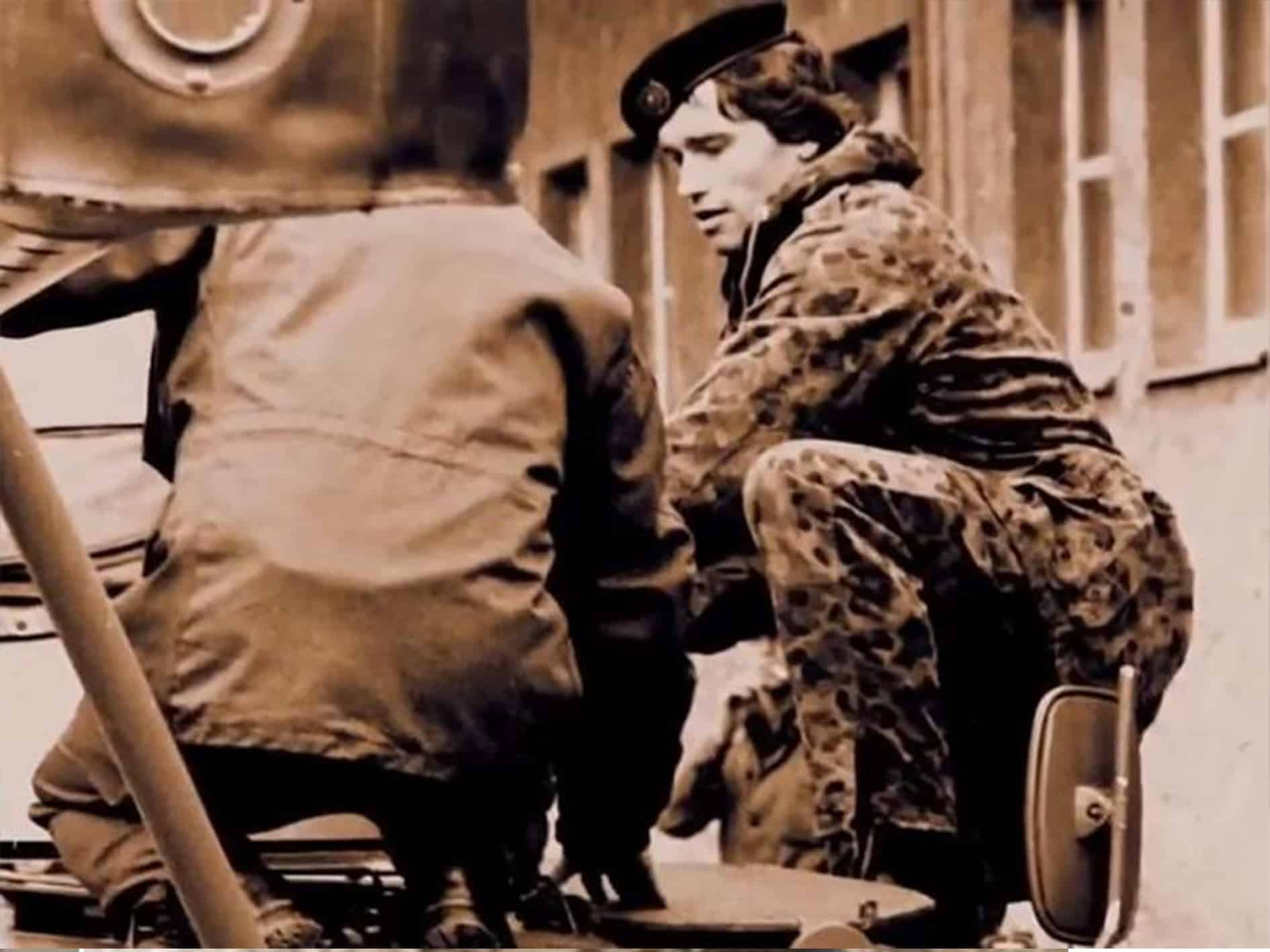 Not all of Schwarzenegger’s military mishaps were entirely accidental. As he once recounted to Jimmy Fallon, one time during a training manoeuvre, “my friend next to me had an M60, a more modernised tank. So I said to him, ‘let’s see who’s faster down this hill.’ So we took off, and we drove down this hill at least 40 miles an hour, in the middle of the night, we didn’t see where we were going, we just crashed into trees and bushes and everything.”

Schwarzenegger won the impromptu race, but “I realised that the whole infantry, 15 guys that were standing on top of the tank, I’d totally forgot to tell them to get off the tank. So they were just holding on and falling off, and I heard their screams the whole time… by the time I got to the bottom, there was no one on the tank anymore.” 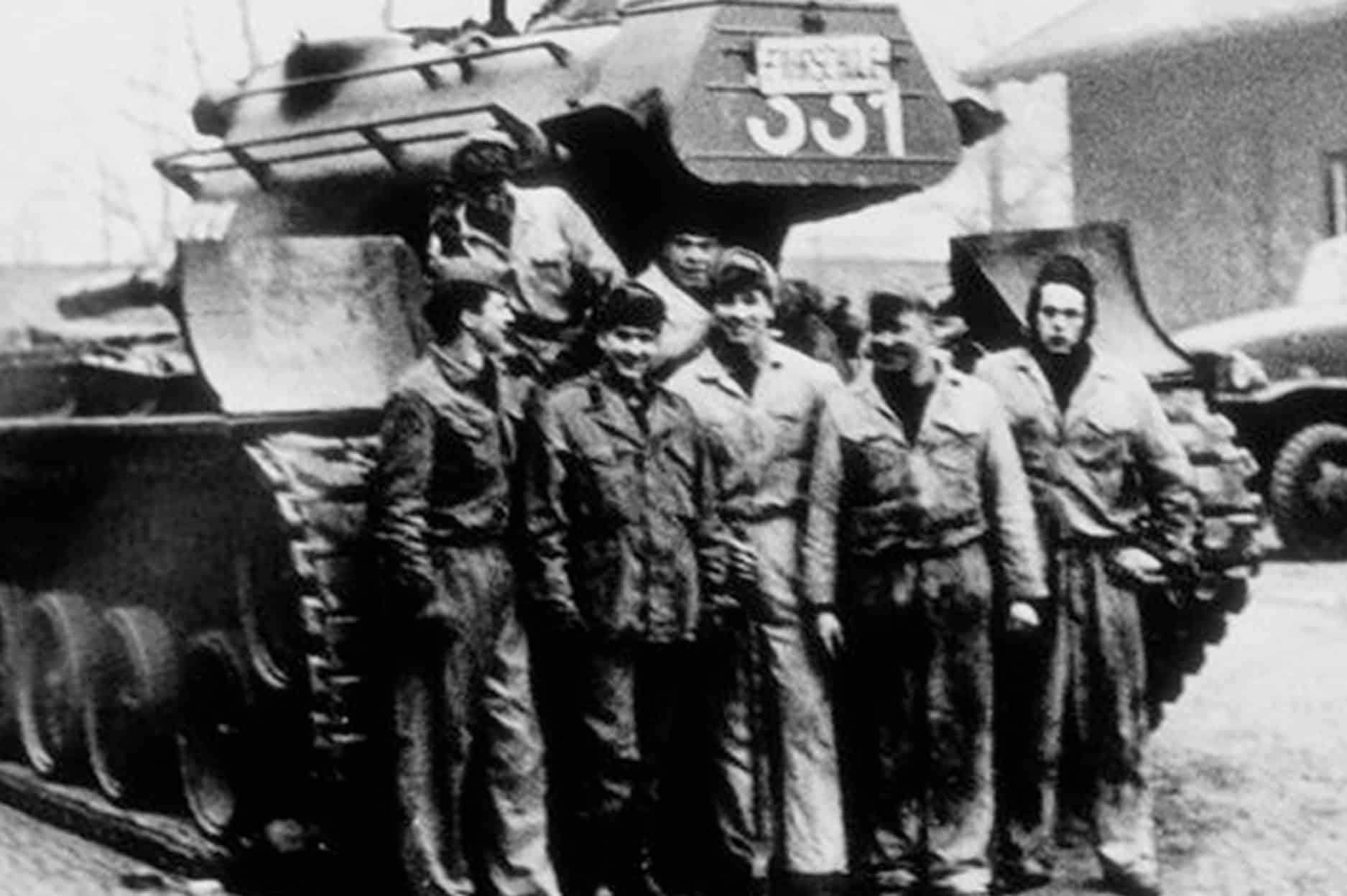 As punishment, Schwarzenegger and the other tank driver were ordered to crawl under and climb up through the tank and back again 50 times, a task made gruelling due to the thick mud: “when you get full of mud you can’t move, it was impossible, after 25 times I couldn’t move anymore. I took me from 12 midnight to six in the morning to do these 50 reps… I was so exhausted I slept for 24 hours after that.”

Schwarzenegger’s most famous misdeed during his military service, however, was when he went AWOL during basic training in order to compete in the Junior Mr. Europe bodybuilding contest. While he wound up winning the contest, his actions landed him in military jail for a week.

Regardless, Schwarzenegger would continue his pursuit of bodybuilding during his military service and progressed in the sport on return to civilian life, reaching particular heights once he relocated to the US at 21. 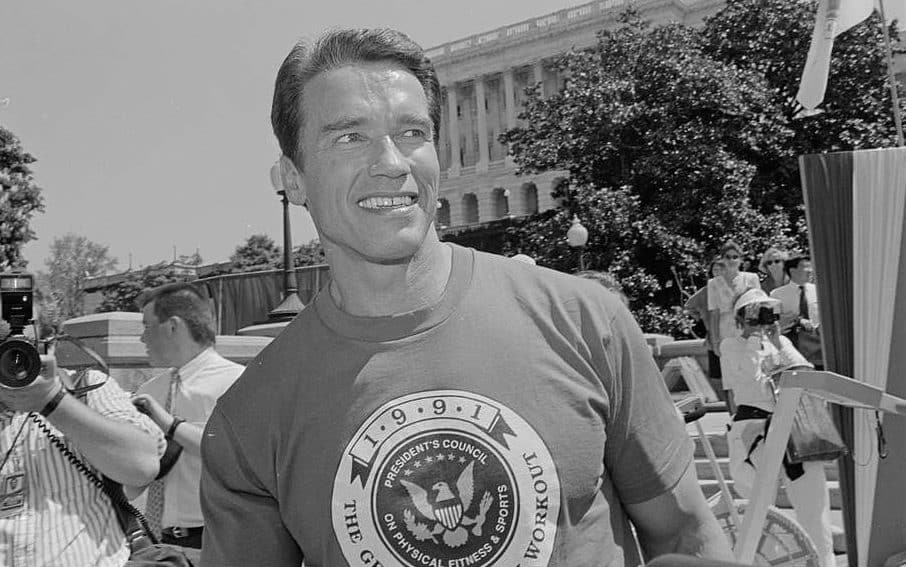 After retiring from bodybuilding, Schwarzenegger moved into acting and wound up becoming one of the biggest box office stars of the 80s. By the 90s, he made his first side-step into politics, enlisted by President George HW Bush to chair a Presidential committee on fitness – and during this time, nostalgic for his army days, Schwarzenegger had a fanciful idea.

Reflecting on his love for his old M47 tank, “I said to myself, ‘well, now they don’t need it anymore… they’ve become obsolete.’ So I asked the Austrian army if I can have it back.” With the help of high-ranking White House figures Dick Cheney and Colin Powell, Schwarzenegger was indeed able to get the very tank he had driven all those years earlier, paying $20,000 to transport it to his US home.

In 2000, Schwarzenegger loaned his tank to a museum in Groveport, Ohio. However, in 2008 (early in his second term as Governor of California), Schwarzenegger asked for his tank back, as he had special plans for the vehicle. Understanding that the spectacle of a tank’s destructive power is a novelty to most people, Schwarzenegger starting putting his tank to good use at charitable events, including a 2014 fundraiser in which one lucky raffle winner got to head out to LA to run things over in Schwarzenegger’s tank. (This is the vehicle’s only destructive power, as its gun has been disabled.)

As Schwarzenegger explained to Fallon, “I’m very passionate about after-school programs, which I’ve been doing nationwide for the last twenty-some years. And we always need money so we can enrol more kids in after-school programs. Here we found a way of having people participate and pay, and we raised through this fundraiser over a million dollars.” 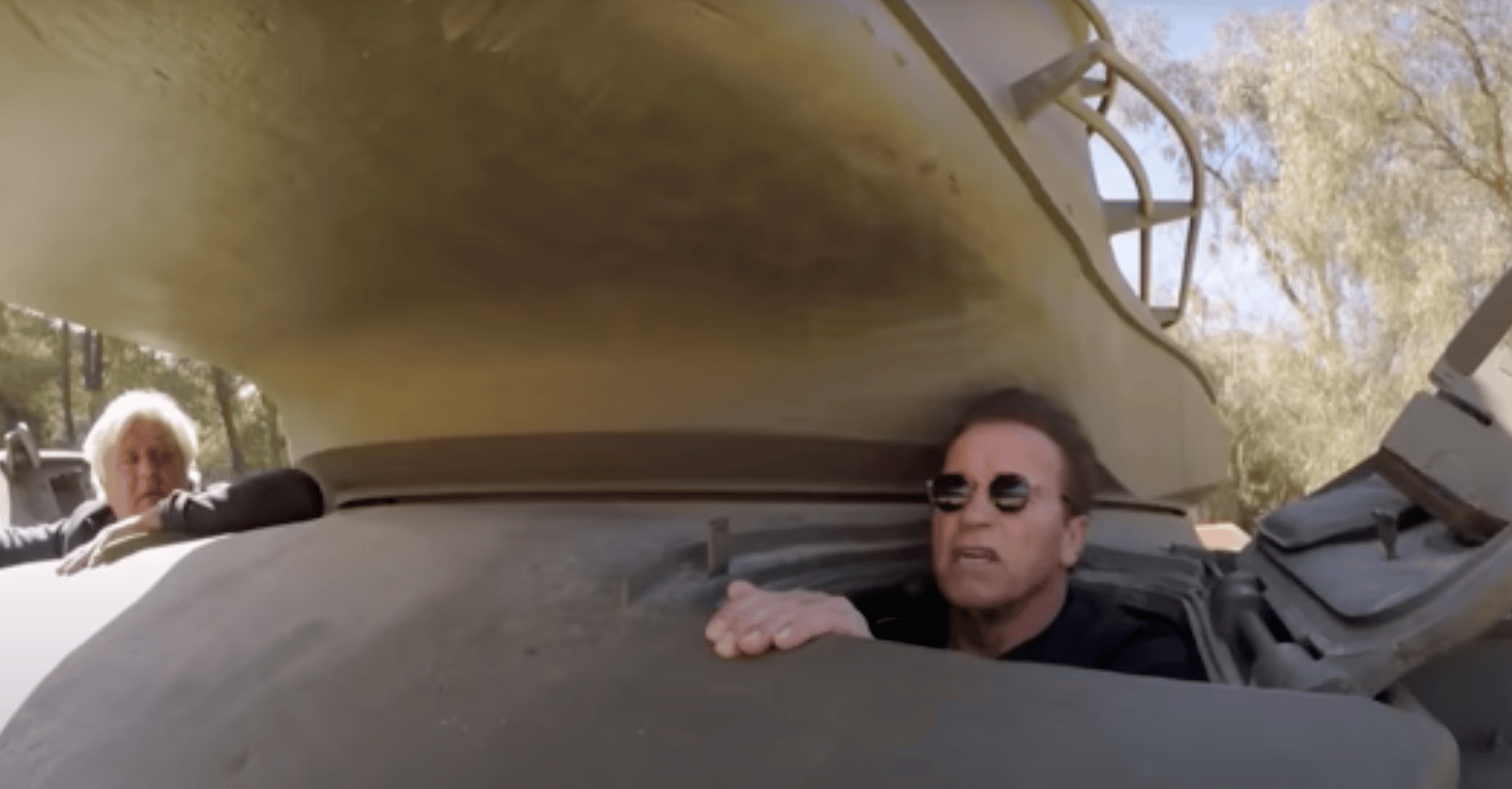 Schwarzenegger’s association with tanks endures. 2021 saw a petition launched on Reddit to make Schwarzenegger part of video game World of Tanks. In response, Schwarzenegger did indeed collaborate with the makers of the game on a special event. 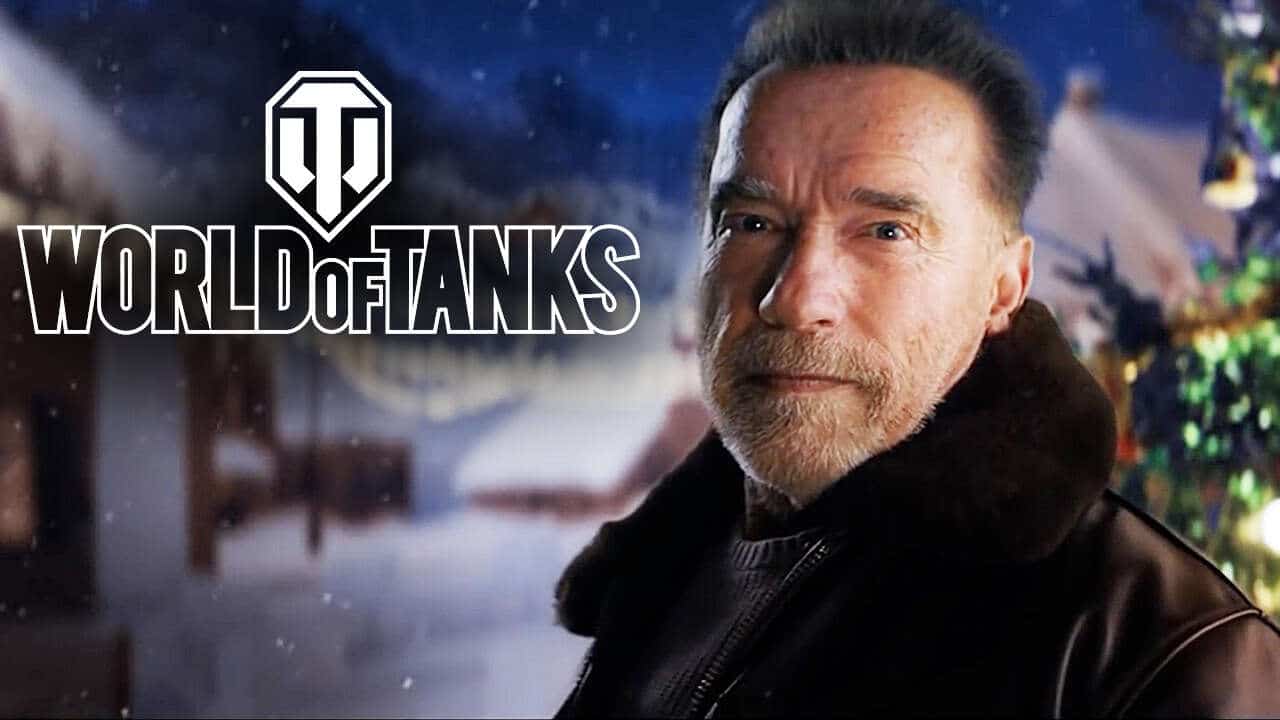 As for just why he still cares so much about tanks, Schwarzenegger explains, “I think any machine this complex deserves to be marvelled at. Even though it is very dangerous, somebody worked incredibly hard to engineer it perfectly.

“I think it is always important to understand history and preserve it, even if it can be uncomfortable. [My tank] is still dangerous since it can crush cars and anything that gets in its way, so you have to treat it with respect.”