Reminiscing about the delicious food, sweets and drinks we enjoyed consuming back in the 80s and 90s is one of our very favourite pastimes, and we know that many of you also love sharing in thar nostalgic hobby!

To that end, we have on more than one occasion taken a look back at items such as Smash Mashed Potato, Fiendish Feet yoghurts, McCain Micro Chips and Secret chocolate bars, some of which aren’t even available on supermarket shelves anymore, much to our annoyance.

But we’re very pleased to report that the food-based nostalgia doesn’t end there, so if you’re willing, please do join us in taking one more trip back in time to view another 10 delicious foods and sweets that we all loved eating as kids! 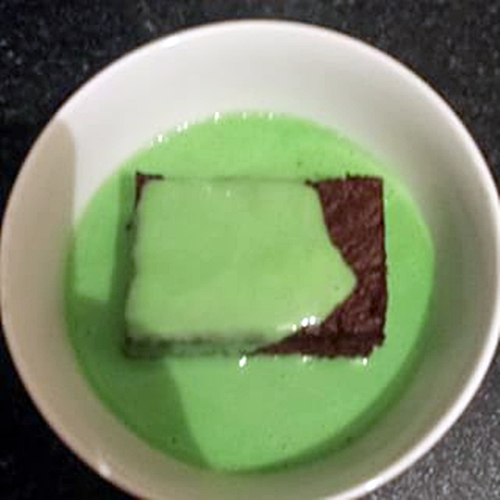 Of course we enjoyed consuming custard when we were young, because what child doesn’t? But who remembers eating a sponge pudding that was swamped in mint custard, a sauce that looked pretty disgusting but actually tasted extremely delicious?

Whilst we don’t remember our parents ever feeding us this green coloured treat, it was often part of our school meal times, and we were always first in the queue when the dinner lady announced that there were seconds to be had. 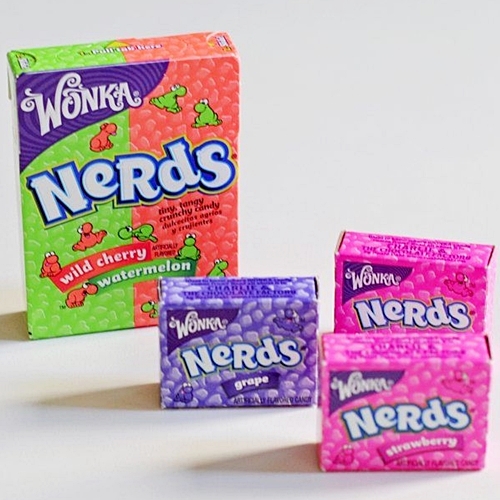 Tiny, tangy sweets that came in a multitude of flavours, sometimes two per box, Nerds were the ultimate candy treat during a weekly visit to our local newsagent in the 80s and 90s.

Whilst there were hundreds of things we could have spent our hard-earned pocket money on, the fact that we simply had to taste every single Nerds flavour meant they were always top of our sweetie wish-list. 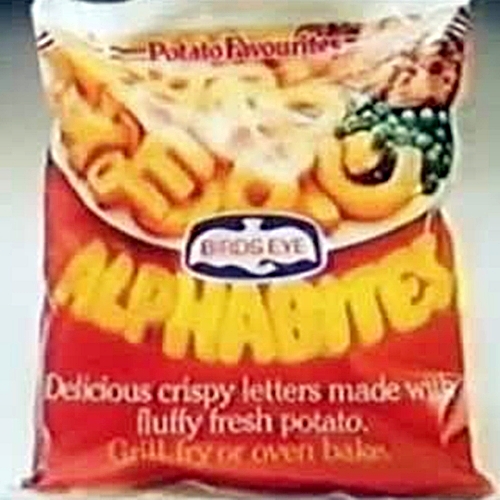 Some may call them by another name, but to us they will always be Alphabites, the letter-based tea time treat that meant we never again complained to our mum about having to eat potatoes.

There may have been a small amount of frustration when we weren’t given the correct letters to spell our name, but Alphabites, especially when covered in tomato sauce, were so delicious that any grammatical concerns were soon forgotten. 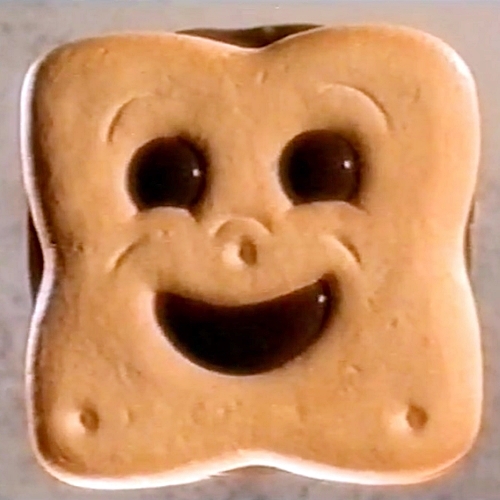 Put a funny face on your food and you can be sure that children will immediately be more interested in your product than they were before, which was most definitely the case with BN Biscuits.

Whilst we only remember them coming filled with chocolate, we are reliably informed that BN Biscuits were also available in Strawberry and Vanilla flavour. Which was your favourite? 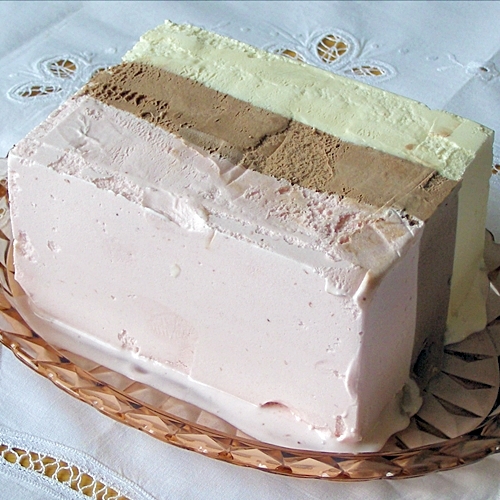 How on earth did families cope when each member of the household preferred a different flavour of ice cream? Why, they purchased a block of Neapolitan of course!

Whether you preferred chocolate, vanilla or strawberry, or were simply happy to consume any ice cream flavour that you were offered, Neapolitan was always the answer. 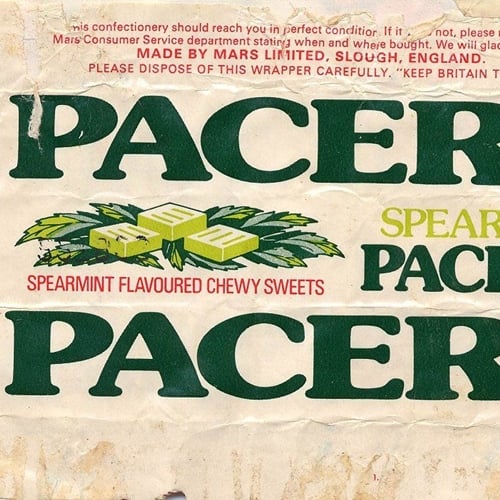 We were used to mint-flavoured sweets being hard, so when we became aware of the soft, chewy, minty Pacers, we never looked back.

Originally known as Opal Mints due to being released as a sister product to Opal Fruits (which of course later became known as Starburst), Pacers were sadly discontinued in the 1980s. 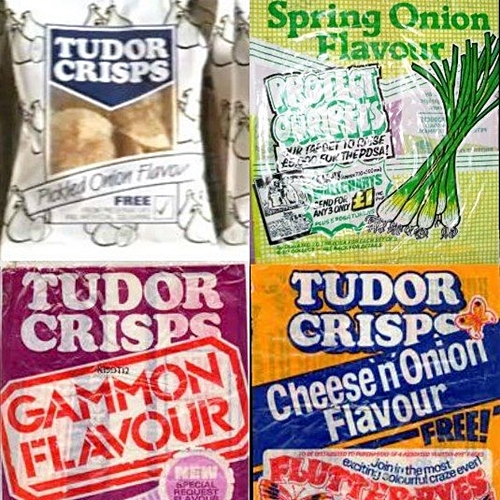 Coming in a wide variety of flavours including Gammon, Spring Onion, Cheese and Onion and ickled Onion, Tudor Crisps were originally an independent firm working out of Newcastle, England.

Tudor Crisps were later bought by Smith’s Crisps who were themselves eventually snapped up by Walkers. Sadly the Tudor brand was discontinued in 2003 when Walkers decided to focus solely on their own crisp range. 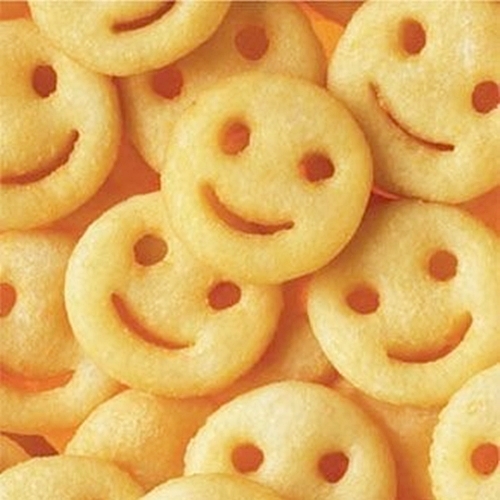 If the aforementioned Alphabites didn’t bring a smile to your face, then McCain’s fluffy mashed potato-filled smiley faces were sure to get you grinning.

Prepared with sunflower oil to give them their crunchy taste, Potato Smiles are still very much available to purchase from your local supermarket should you be looking to treat the young (or old) members of your family. 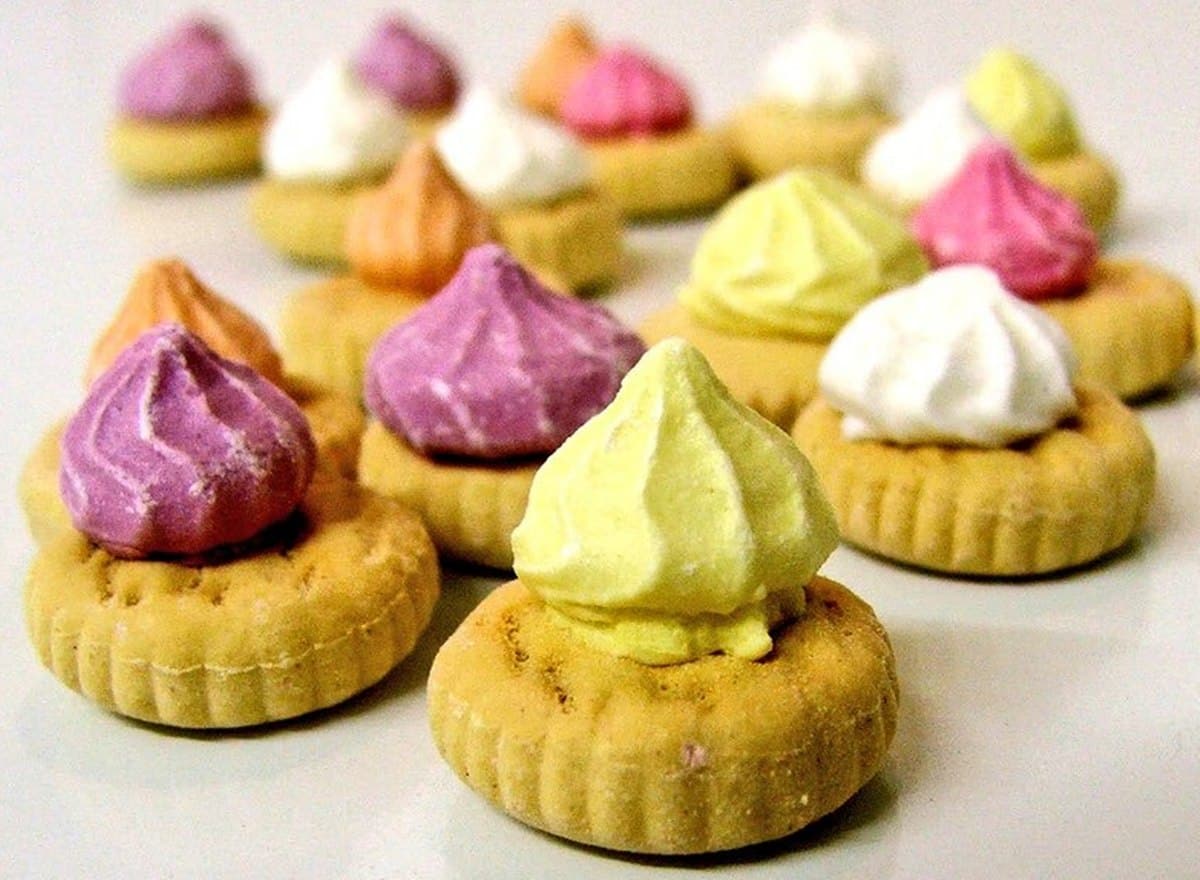 Tiny round biscuits with a swirl of hard icing on the top, iced gems were a children’s party food staple for much of our 1980s childhood.

Personally we found them a bit too dry and sickly for our taste, but did have friends who would happily consume them for breakfast, lunch and dinner if they could! 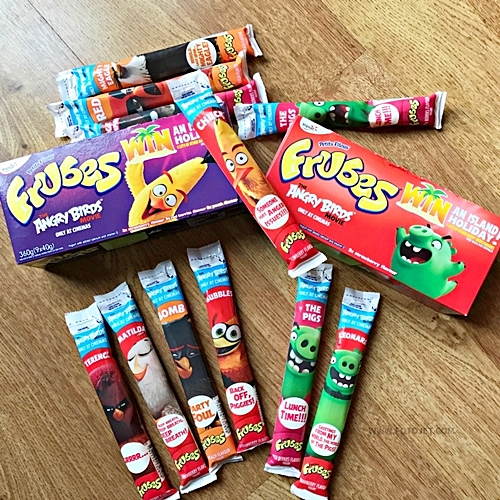 They may not have entered supermarkets until we had finished school, but we remember being extremely jealous when our younger siblings were able to pack a Frube into their lunchbox.

Spicing up yoghurts by having them housed inside a plastic tube rather than a regular container, fewer things made us happier than squeezing a Frubes tube into our mouth.