Americans are known the world over for enjoying a wide variety of different cuisines (it might have something to do with their country’s long history of immigration).

But it doesn’t look as though many Yanks are fans of British food, if one American internet user is anything to go by.

The internet drama kicked off when BBC Yorkshire posted a question to their Twitter followers:

Yorkshire, we have an important question.

Christmas cake, with or without cheese? 🎄🧀 pic.twitter.com/cF2RcNFH0N

Everyone not from Yorkshire is already saying ‘without’ but that’s a topic for a different day.

why do british people still eat like they’re in the 1800s and don’t have electricity https://t.co/ZA6usKcZGY

He probably wasn’t anticipating just how much abuse he would actually receive from British food lovers the world over.

These were just some of the biting responses to the original tweet: 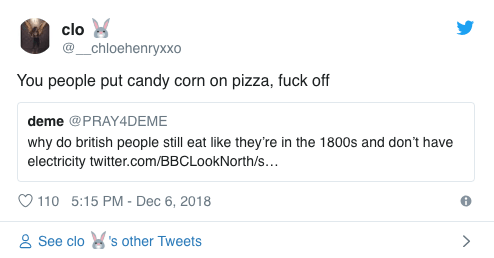 Most Twitter users were also rightly indignant that an American could ever criticise British food considering just how little many Americans seem to know about portion control: 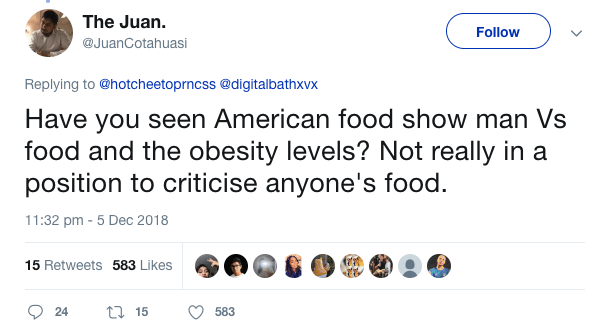 The debate quickly turned political with many people bringing up both countries’ colonial past (which seemed to really rile up ‘deme’, who started the debate in the first place): 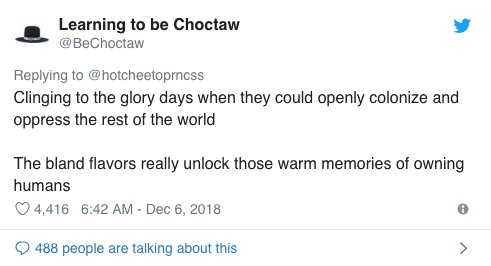 ‘deme’ criticised users for comparing police brutality to what he deemed to be bad food, and later tweeted that he was going to kill himself if “one more british f**k with their wooden teeth replies to my f**king tweet.”

However, far and away the best response to the original tweet has to be from Rebecca Travis. Check it out: 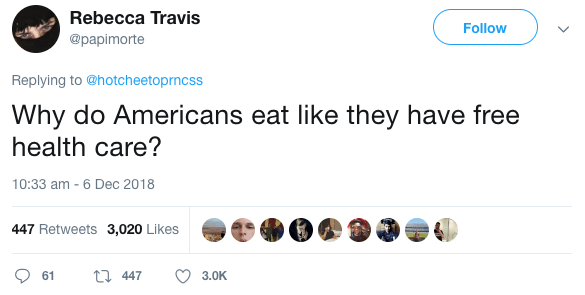 What do you think of the Twitter drama? Storm in a teacup or should Americans avoid criticising British food?