An 80s Kid’s Christmas Was Never Complete Without Some Do-Re-Mi! 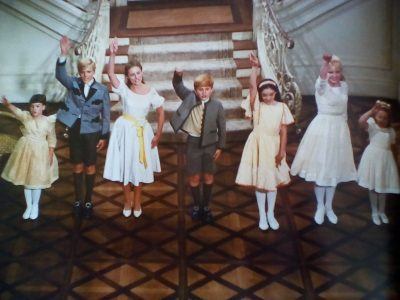 The hills are alive, with the sound of music…
An 80’s kid’s Christmas was never complete without a viewing of The Sound of Music! Released in 1965 it’s been a must watch every year, classic ever since! Children, singing, dancing, nuns, the film had it all! Plus many must have collectors items have been released over the years too! For an 80’s kid that was as exciting as climbing them mountains, raindrops on roses, brown paper packages tied up with strings, and girls in white dresses with blue cotton sashes, all rolled into one!! 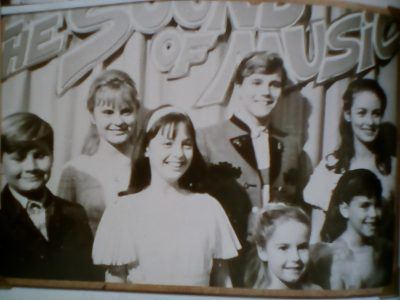 The children! From left to right – Kurt (Duane Chase) Louisa (Heather Menzies) Brigitta (Angela Cartwright) Friedrich (Nicholas Hammond) Gretl (Kym Karath) Marta (Debbie Turner) and Liesl (Charmian Carr). At the film’s premier in 1965. The children loved making the film! Duane Chase has said it was some of the best time ever spent anywhere! 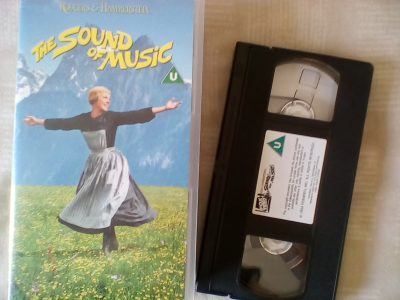 The Sound of Music on video! Yay! You no longer had to wait for Christmas! Your house could be filled with Do-Re-Mi and Austrian Edelweiss all year round! Wahoo!! 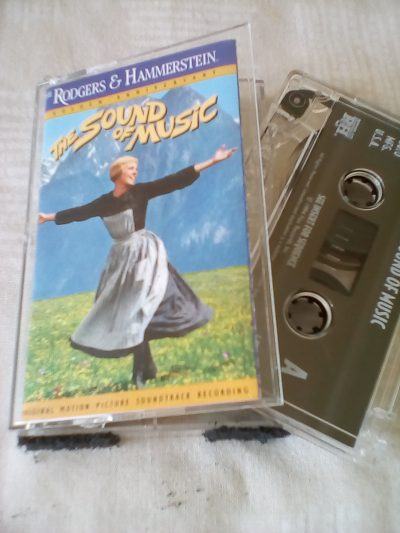 This video also came with a cassette, so you could sing and dance along until your heart was content! Sing along with the legend Julie Andrews (Maria) and the rest of the cast! Including Christopher Plummer (Captain Von Trapp) though it actually was’nt Christopher’s real singing voice in the film! 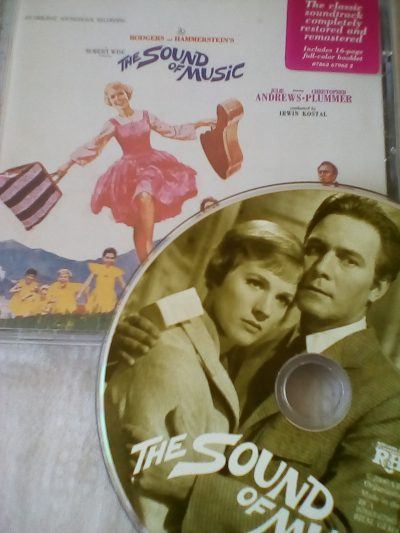 Goodbye cassette’s, hello CD’s!
Though the children really did sing in the film, additional children’s voices were added to give a fuller sound, one of the children was Charmian Carr’s sister, Darlene. Darlene also did Kurt’s (Duane Chase) high note in the So Long Farewell sequince at the party! 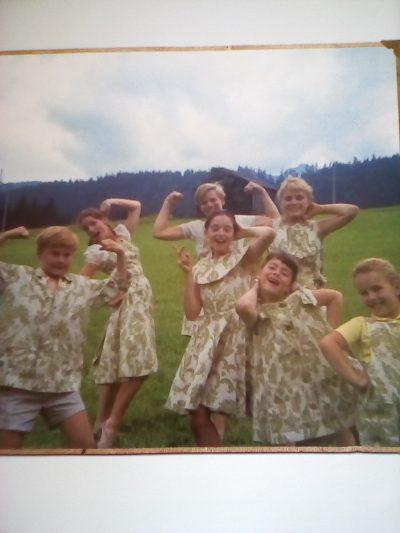 Brilliant, comical photograph of the children, having fun, during a break from filming, on location, Austria, 1964.
Little Kym Kareth was already an experienced actress, at 5 years old! She had worked with Doris Day! She was also in Spencer’s Mountain with Henry Fonda!
English born Angela Cartwright had been a regular on the Danny Thomas Show. She went on to play Penny Robinson, in the hugely successful American TV series, Lost In Space! 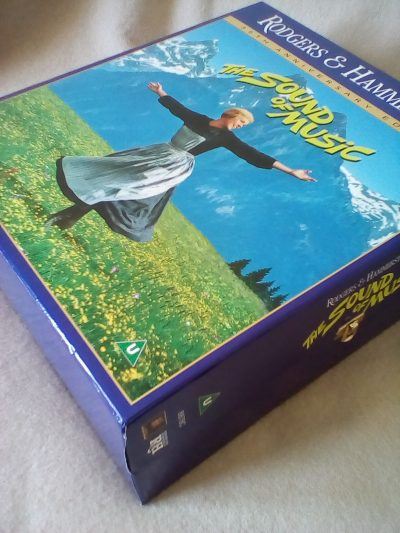 A box full of ‘My Favourite Things’
The limited edition box set! Oh yes! To celebrate the film’s 30th Anniversary!
The film’s popularity has never stopped! The film which won 5 Oscer’s in 1965, including best director, for Robert Wise. 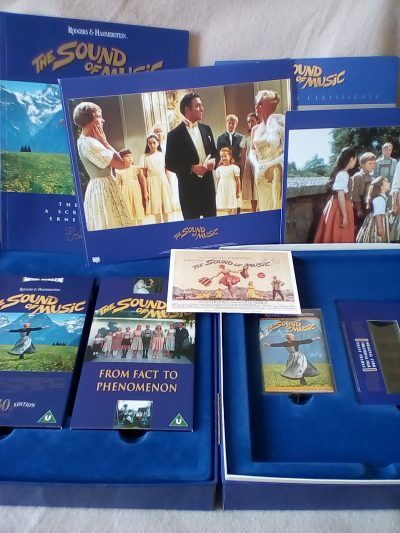 Inside the boxset! Video of the film, in widescreen. Plus another video, a documentary, on the history of the most popular musical of all time! Exclusive colour prints. A book of the screenplay. A soundtrack cassette. The film’s poster, and a one of a kind 35mm film frame from the original cinema negative! 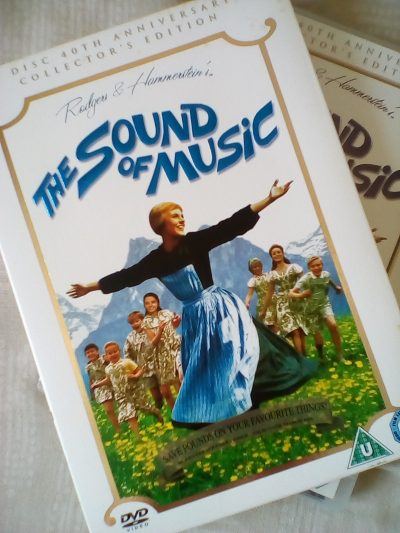 Goodbye video’s, hello dvd’s!
This collector’s edition was released to celebrate the 40th anniversary of the film!
The film was based on a true story, that of the Von Trapp Singers, the real Maria Von Trapp can be seen in the background during the I Have Confidence scene!
During rehearsal’s of Sixteen Going Seventeen, Charmian Carr hurt her ankle. If you look closely in the scene, you can spot she is wearing a bandage! 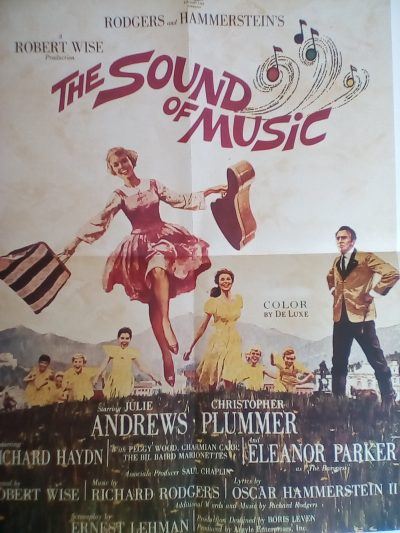 The original Theatrical Poster!
The inside shots of the Von Trapp’s home were filmed on a sound stage in Los Angeles! Nicholas Hammond (Friedrich) was naturally a brunette, but had to dye his hair blonde for the character! Charmian Carr (Liesl) though playing sixteen going on seventeen, was actually 21! 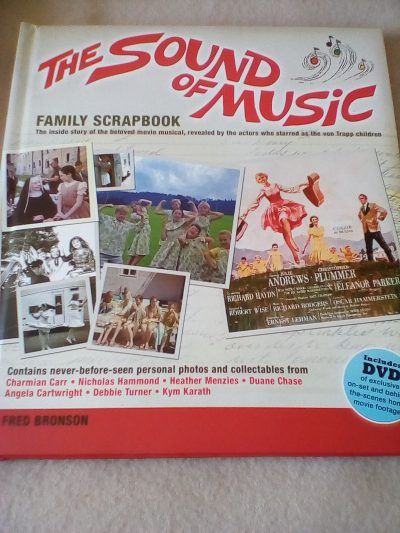 A Scrap Book, by the children! With photographs, interviews, a dvd, and tonnes of items from their time making the film, plane tickets, premier tickets, Angela Cartwright’s Beatles diary (it was the 60’s!) Plus loads more. This book is must for all Sound of Music fans! 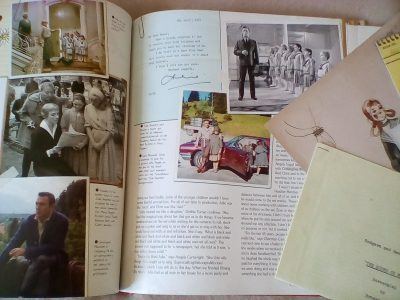 A page and some item’s from this fabulous Scrap Book!
During the boat scene, Gretl, played by 5 year old Kym Karath, could’nt swim! So when the boat turned over Julie Andrews was meant to catch her. But when the boat did turn, it was at such a force that Julie fell the wrong way, and poor Kym went under the water! 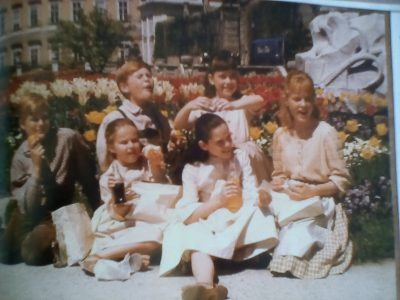 The children in Mirabell Gardens in Saltzberg, Austria. Happily enjoying their lunch break!
The Sound of Music is one of the most loved film’s ever, it’s love goes from generation to generation. I’m sure it will always be up there as a Christmas must watch! It will never be told, So Long Farewell!!