Alfredo James Pacino is, without question, one of the finest actors ever to grace the stage and screen, with a remarkable body of work spanning more than half a century. There’s also no getting around this fact: that the Italian-American icon is one of the kings of over-acting. (Pacino himself once remarked: “You know what they say: in the theater you have to reach the balcony.”) Consider these unforgettable moments, when Pacino over-acted his heart out… 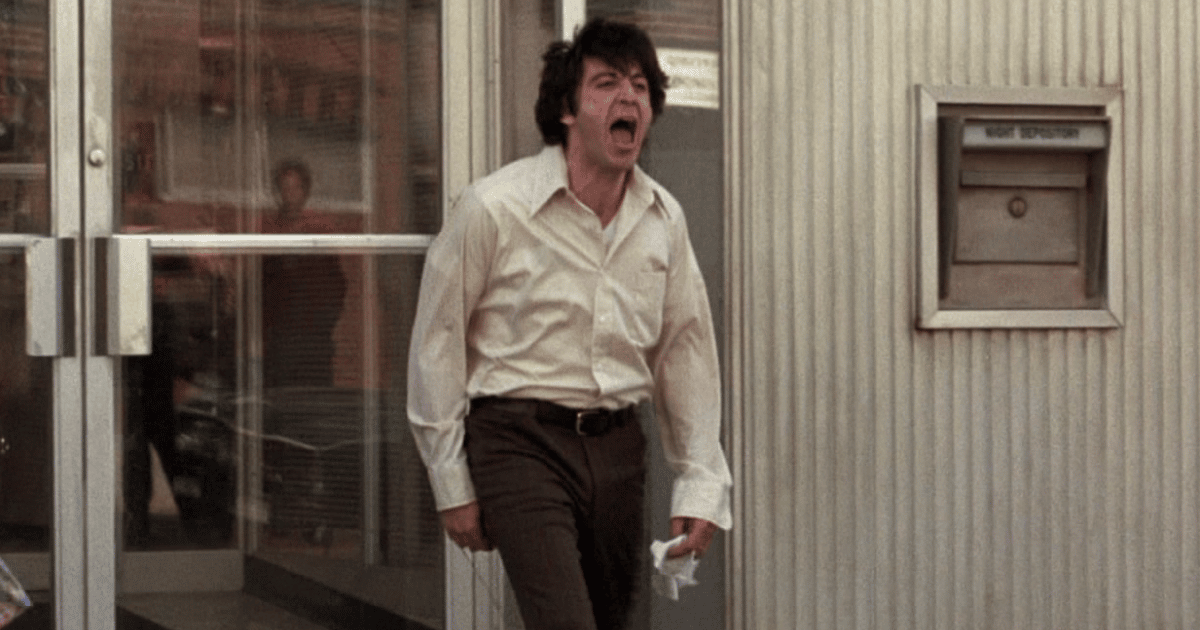 It’s easy to forget now, but in the early movies that launched Pacino (ie the first two Godfather movies and Serpico), the actor gives largely sober and understated performances. It was arguably on 1975’s Dog Day Afternoon that we saw quite how excessive Pacino could get. As the desperate bank robber Sonny, Pacino is a sweating ball of anxiety throughout, and prone to intense bursts of shouting.

This reaches its peak when Sonny prompts the crowd outside the bank to cheers by invoking the memory of police atrocities at the Attica prison riot of 1971, repeatedly yelling at the top of his lungs, “ATTICA!” 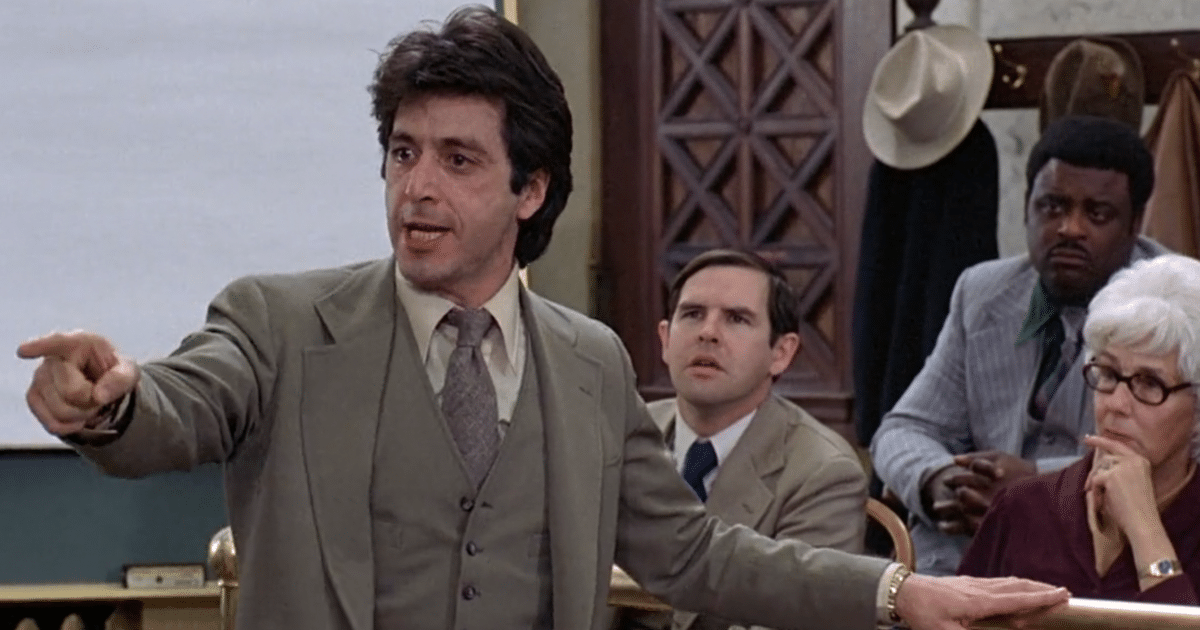 Lawyers, in the movies at least, are renowned for getting theatrical, particularly when giving their closing statements. Small wonder, then, that when Pacino played a lawyer in 1979’s And Justice for All, he gave us one of the most melodramatic courtroom scenes ever. Pacino’s Arthur Kirkland is forced to defend the corrupt judge on trial for rape, and succumbs to his conscience in a spectacular fashion.

Declaring that the man he’s meant to be defending is guilty, Kirkland roars to the jury, “my client… should go straight to f***ing jail!” Then, when the judge tells him he’s out of order, Kirkland replies, “you’re out of order! The whole trial’s out of order!”, before being dragged out screaming. 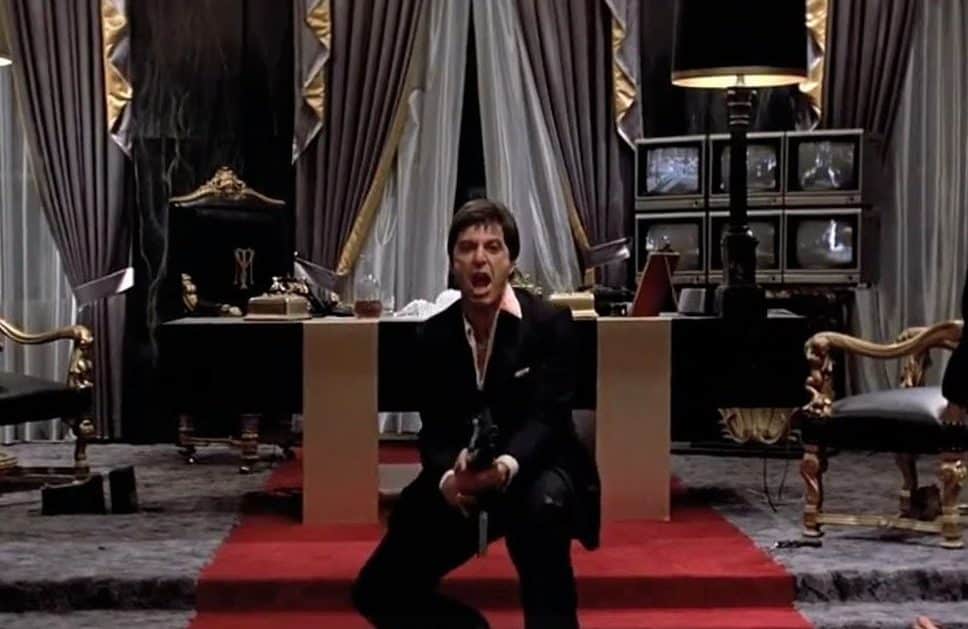 1983’s Scarface gave Pacino his second great gangster role after The Godfather’s Michael Corleone, and it surely remains the most notorious film of his career. As Tony Montana, we see Pacino go from impoverished Cuban refugee to up-and-coming criminal, ultimately becoming the biggest drug lord around – but not without being driven literally mad, both on power and cocaine.

Scarface boasts no shortage of moments in which Pacino takes things up to eleven, but when all’s said and done there’s one scene that stands above the rest: the iconic moment in the finale when Montana picks up his eye-opening grenade launcher-machine gun combo and yells at the gunmen outside his door, “You wanna f*** with me? OK. You wanna play rough? OK. Say hello to my little friend!” 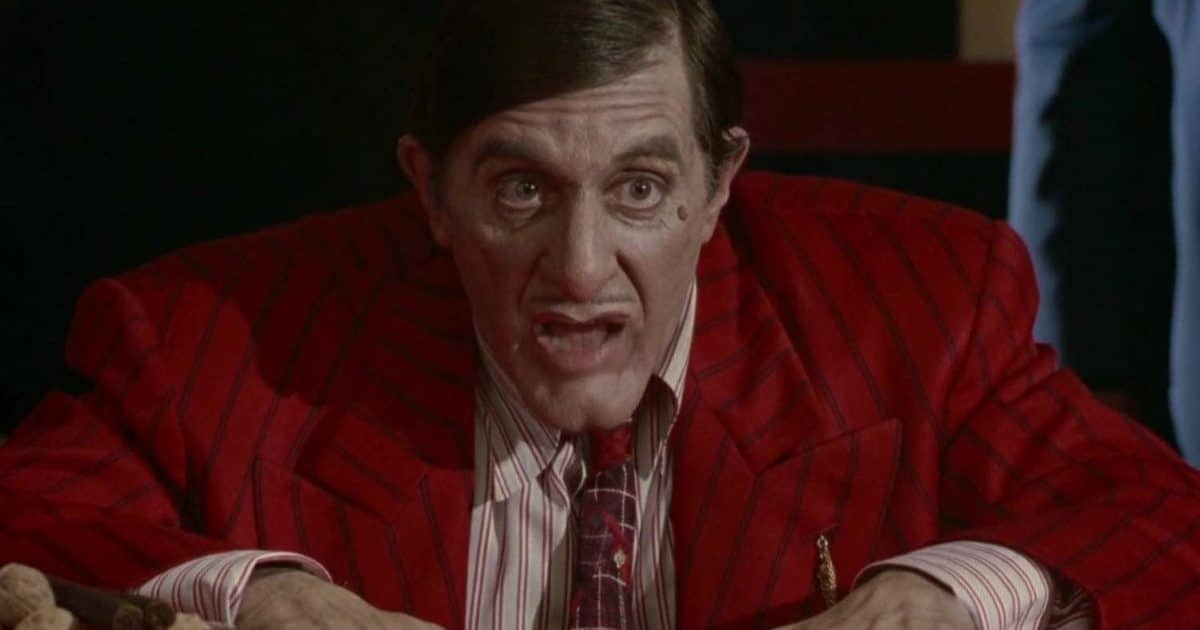 Al Pacino might not be too closely associated with comic book movies, but the screen legend appeared in one of the first major blockbusters adapted from a comic, 1990’s Dick Tracy. As evil mob boss Big Boy Caprice, Pacino is plastered in prosthetic makeup to give him a more cartoonish appearance (along with his other fellow gangster actors, including an unrecognisable Dustin Hoffman).

Under those circumstances, we can hardly hold Pacino at fault for not dialling things back. Big Boy is never more over-the-top than when he stamps on his table and rants at his henchmen, “I’m looking for generals! What do I got? Foot soldiers! I want Dick Tracy dead!”, before literally flipping the table over. Subtle!

6. “Just when I thought I was out, they pulled me back in!” – The Godfather Part III 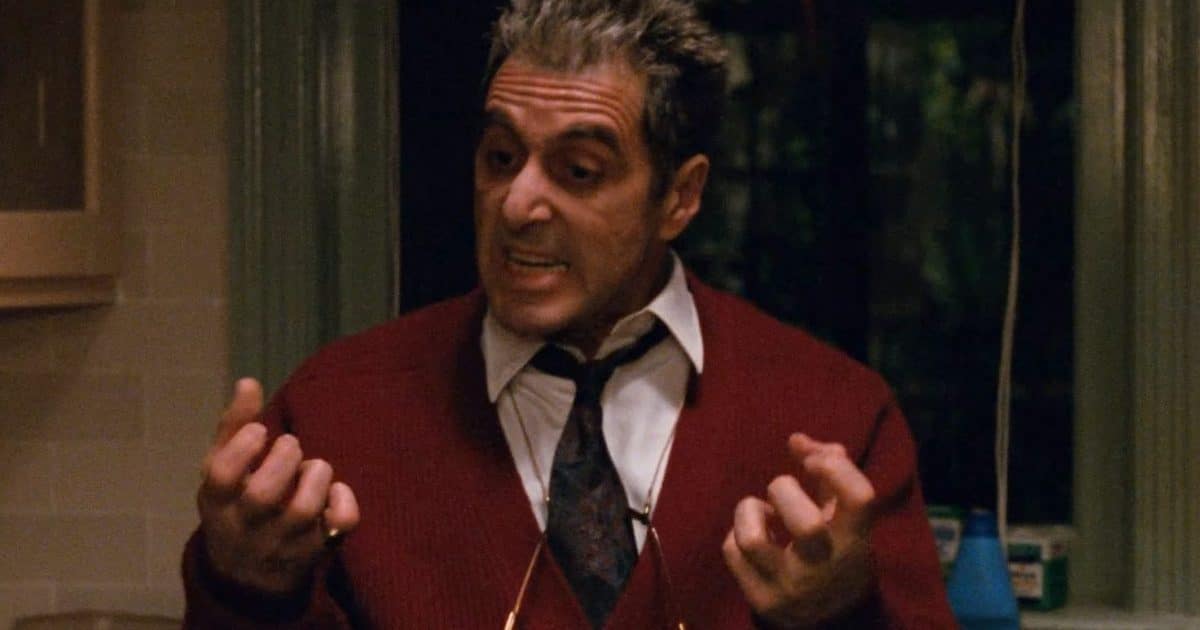 Pacino’s Michael Corleone may have been for the most part a softly-spoken straight-talker in The Godfather and The Godfather Part II, but by 1990’s The Godfather Part III both the character and the actor were a little older, and a little more ready to cut loose with their emotions. Pacino demonstrated this most memorably in the scene when, during a personal crisis, Corleone suffers a stroke.

Furious at the situation he finds himself in, Corleone hisses the film’s most famous line: “Just when I thought I was out, they pulled me back in!” Overwhelmed, the ageing head of the family begins to collapse and rant incoherently, “Altobello, you deceitful old f***!” Then, as his sister Connie (Talia Shire), nephew Vincent (Andy Garcia) and associate Al Neri (Richard Bright) try to help him, Michael roars the name of his long-dead brother, “Fredo! Fredo!” 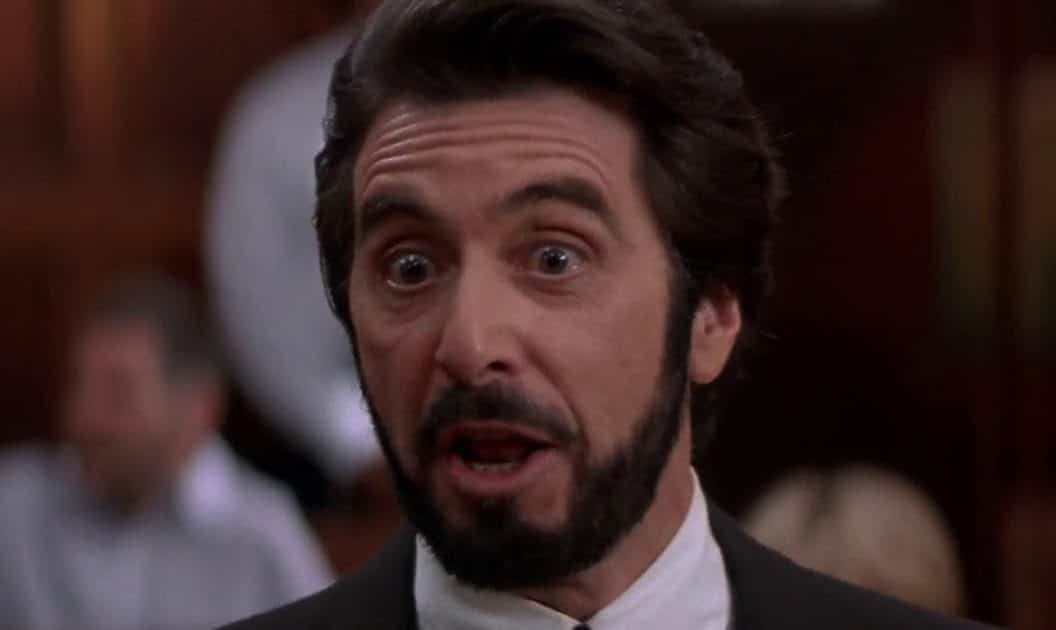 A full decade after Scarface, Pacino reunited with director Brian De Palma to portray another Latin American criminal (it was a different time!) in Carlito’s Way. In the early scenes, we see Pacino’s Carlito Brigante in court as his 30-year prison sentence is overturned on a technicality. Making the most of the moment, Brigante proceeds to deliver a lengthy speech that both declares his rehabilitation and rubs his victory in the sour faces of those who convicted him. 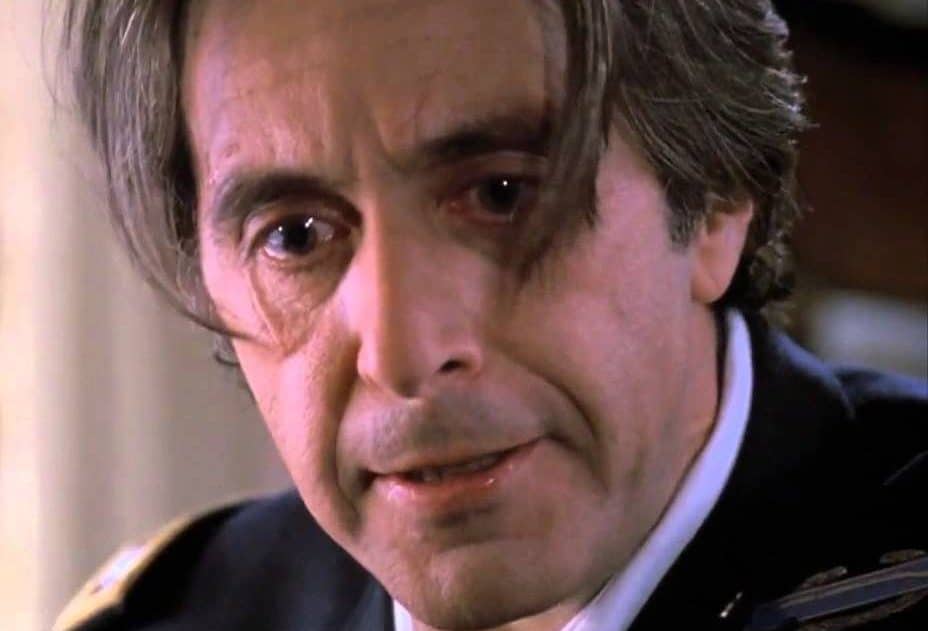 By 1993, Al Pacino had been nominated for six Academy Awards and lost out every time, but that losing streak was finally broken by Scent of a Woman, which landed him the Best Actor Oscar. The film cast Pacino as Lt Col Frank Slade, a blind Vietnam veteran who has degenerated into a bitter, bad-tempered and loud-mouthed alcoholic. In other words, the role really gave Pacino licence to cut loose.

If we’re to believe the old adage about the blind finding their other senses sharpen, all that leftover energy for Pacino’s Slade clearly went into the volume of his voice. While his catchphrase of “Hoo-ah!” is widely remembered, Pacino’s most excessive moment comes when Chris O’Donnell‘s Charlie foils his suicide attempt, at which Slade yells, “I got no life! I’m in the dark here! You understand? I’m in the dark!” 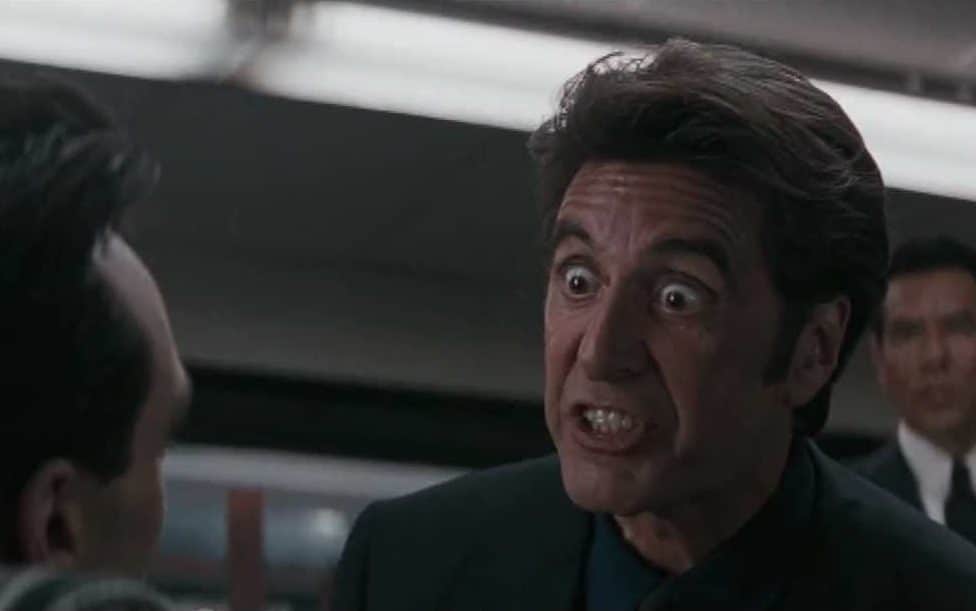 1995 crime drama Heat is one of Al Pacino’s best movies, and notable for being the first time he got to act alongside the similarly revered Robert De Niro. However, writer-director Michael Mann’s film also boasts one of Pacino’s most startlingly excessive performances, as the highly-strung LAPD robbery homicide detective Vincent Hanna, obsessed with catching De Niro’s career criminal Neil McCauley.

Hanna has no shortage of OTT moments (early on he roars at an informant, “gimme all you got!” and “don’t waste my motherf***in’ time!”), but his most unforgettable outburst comes when interrogating Hank Azaria’s Alan Marciano, who’s been having an affair with Ashley Judd’s Charlene Shiherlis, of whom Hanna declares, “she’s got a GREAT A**! And you got your head all the way up it!” 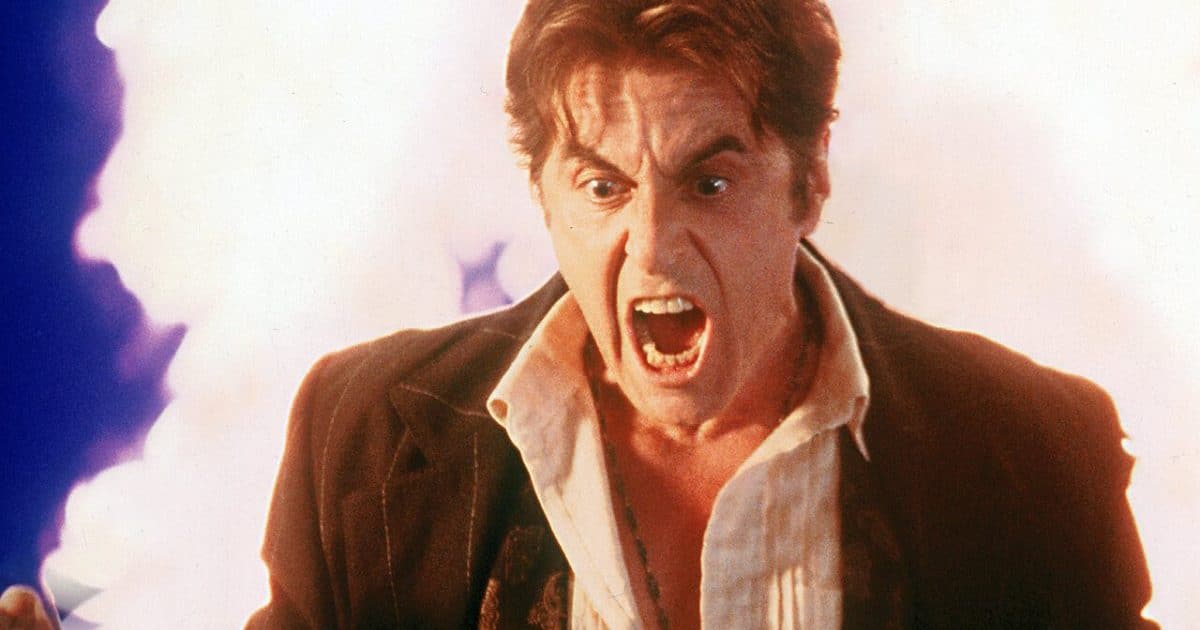 If there was ever a role that would really let Pacino reach new heights of excess, what better part than Satan himself? 1997’s The Devil’s Advocate casts Pacino as the cleverly named John Milton, a law firm boss who is in fact the Devil in disguise, and he’s hellbent (get it?) on corrupting Keanu Reeves‘ ambitious young lawyer, Kevin Lomax.

In the final scenes, once Milton’s true nature is revealed, he launches into a venomous rant against God (“He’s a tight-a**, he’s a sadist! He’s an absentee landlord!”), then declares of himself, with steadily increasing volume, “I’m a fan of man! I’m a humanist… Who, in their right mind, Kevin, could possibly deny the 20th century was entirely mine? All of it, Kevin! All of it! Mine!” 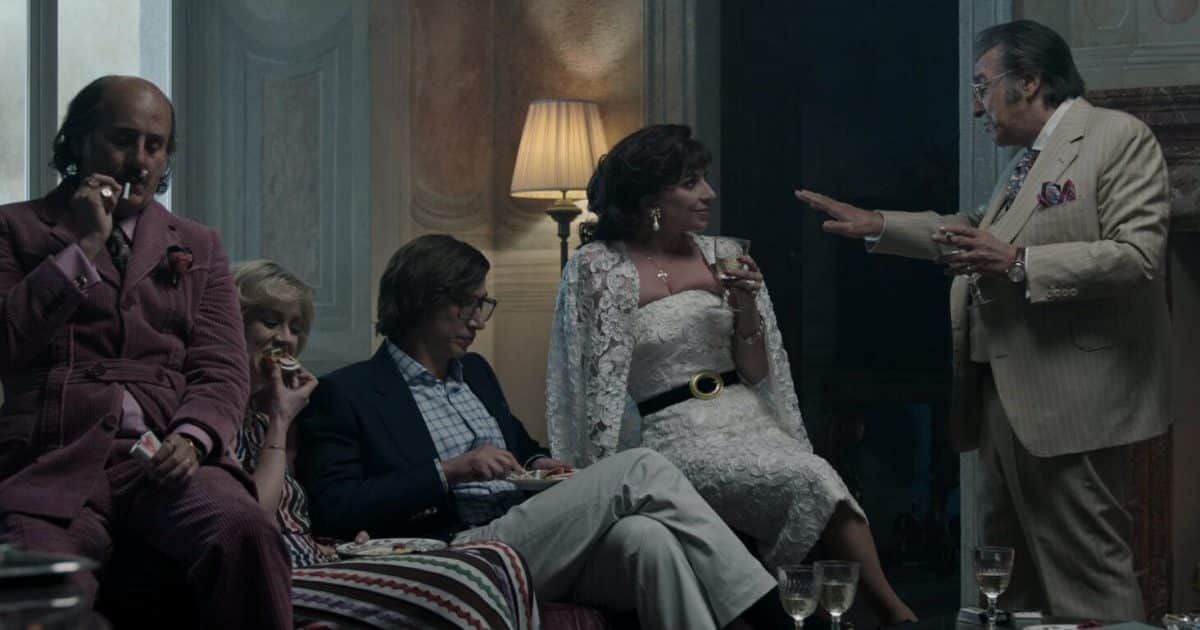 Ridley Scott’s fact-based 2021 drama House of Gucci proved that, even as an octogenarian, Al Pacino can still reach heights that performers half his age can’t hit. Admittedly, Pacino faces a particular challenge portraying fashion empire patriarch Aldo Gucci, as (with the exception of Adam Driver) most of his co-stars seem determined to give the most melodramatic, hyper-stereotypical performances of Italians ever put on film.

Lady Gaga gets pretty out-there in the lead as Patrizia Reggiani, but even she pales in comparison to Jared Leto as Paolo Gucci, who dons heavy prosthetics and goes so over-the-top even Pacino seems comparatively subdued. Even so, Leto’s excess draws out Pacino’s similar inclinations, particularly in a late scene in which an enraged Aldo embraces his son, in what could almost be a re-enactment of the similar embrace between Pacino’s Michael and John Cazale’s Fredo in The Godfather Part II.