As the actress who took the title role in one of the most beloved movie musicals of the 1980s, original Annie star Aileen Quinn has earned her spot in film history. Like so many child stars, however, Quinn never took another role with the same impact as the one that made her famous and ultimately wound up leaving showbusiness behind in adulthood.

Aileen Quinn has continued to devote much of her life to singing, dancing and acting, but she has more permanently taken up a much more down-to-earth profession. The star of a hit musical aged ten, now, in her 50s, Quinn is a teacher (of theatre, no less) at a smalltown NJ university – an outcome the former child actor calls “a blessing in disguise”. 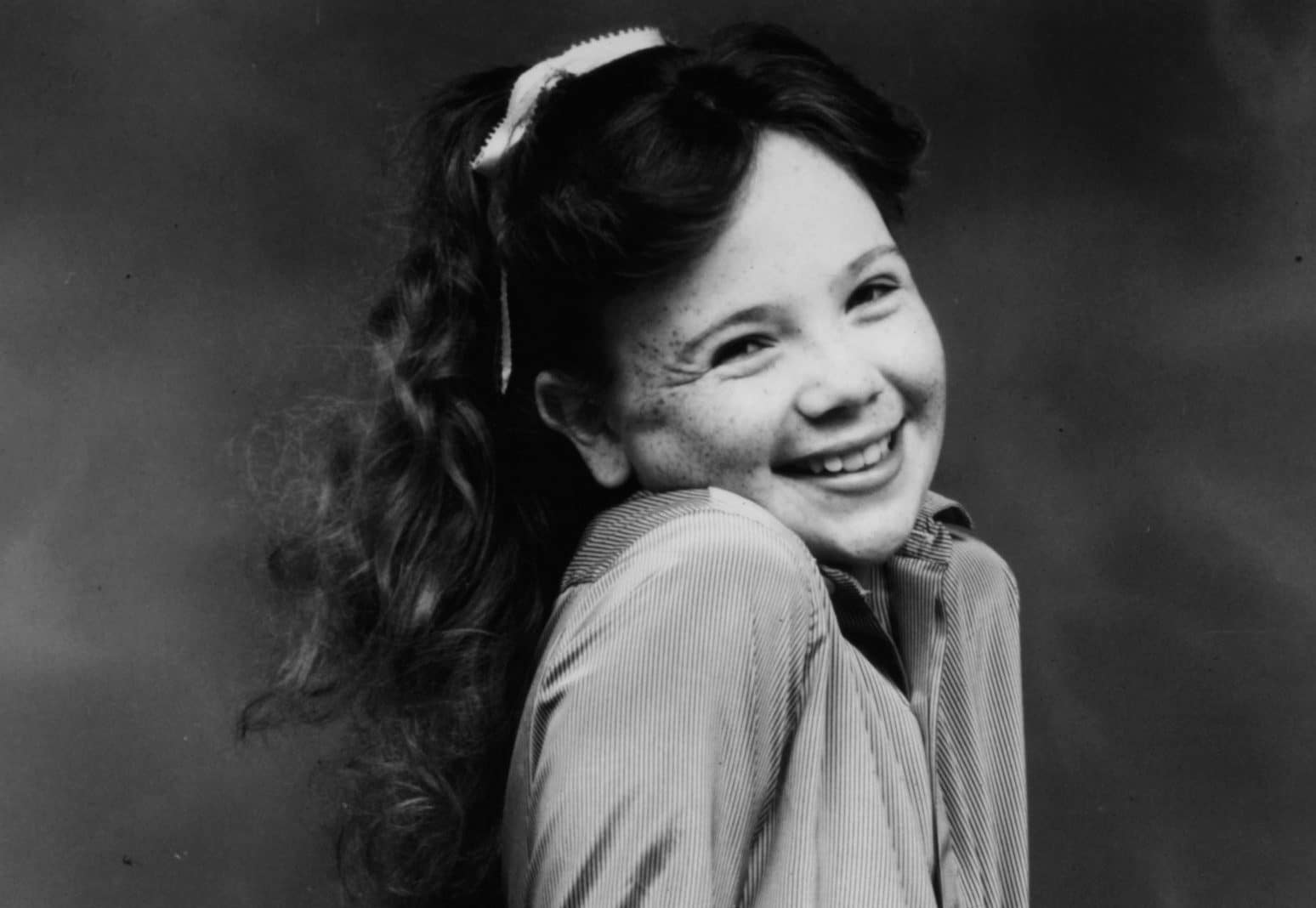 As if to predict where things would go, Quinn got her first role in another musical with ‘Annie’ in the title, in this case a stage production of Annie, Get Your Gun at the age of seven. Soon thereafter she landed an agent, appeared in a number of TV commercials and made a brief, uncredited appearance in the Burt Reynolds comedy Paternity. 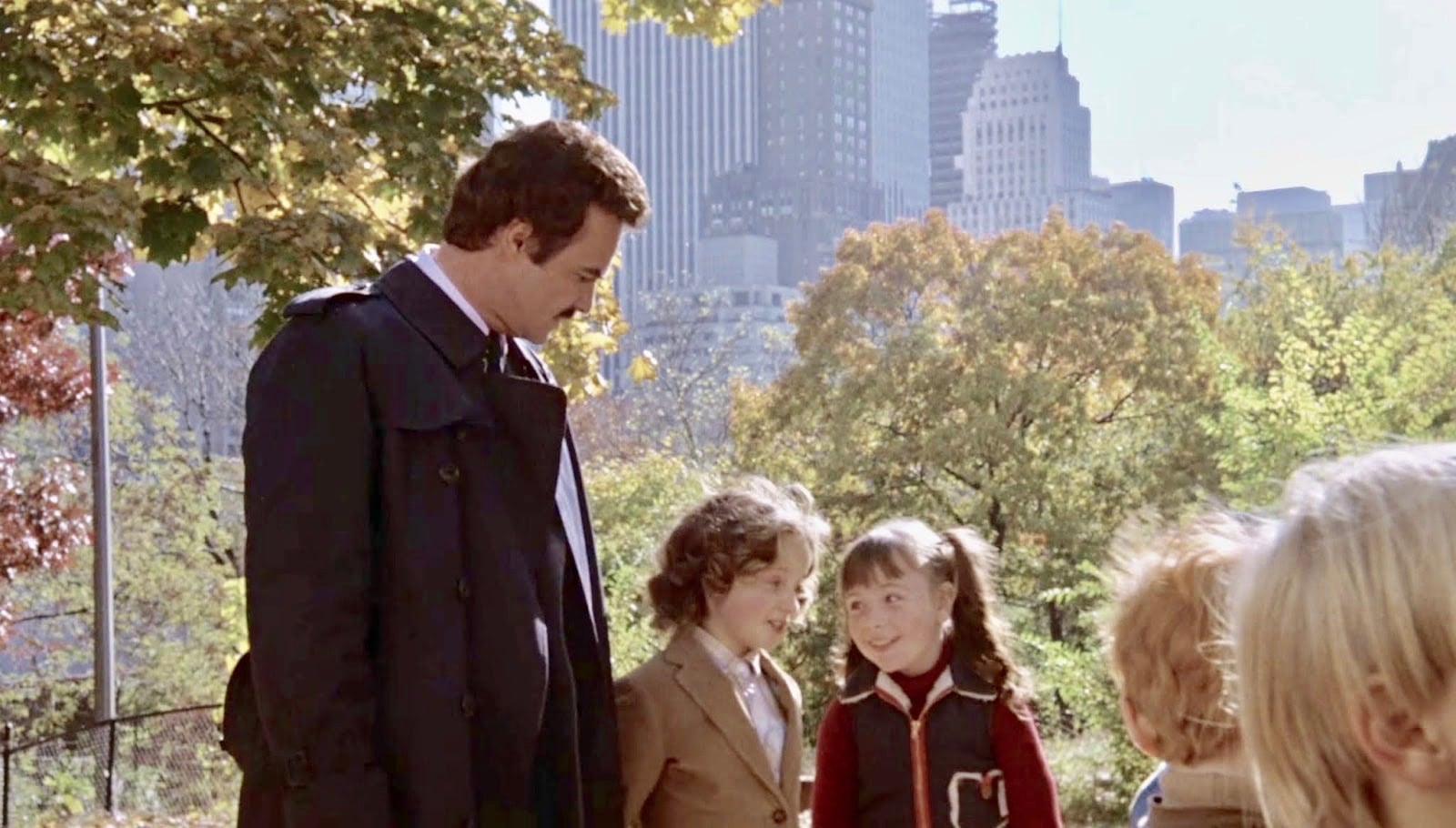 It was around this time that Quinn was cast in Annie – not John Huston’s film production, but the original Broadway stage musical that had been running to huge success since 1977. Quinn did not in fact play the title role of little orphan Annie on Broadway: that honour at the time went to a young Sarah Jessica Parker. Instead, Quinn was cast in the stage version of Annie as a ‘swing orphan,’ an understudy for all the supporting orphan roles.

This proved a challenge, as Quinn had to know multiple roles back to front, and didn’t know from day to day which one she would be playing. Daily two-hour commutes from her Pennsylvania home to New York were also a necessity. Her mother remarked of this experience, ”It was tiring, but you couldn’t pay for an acting course that would give you what she got from that.” 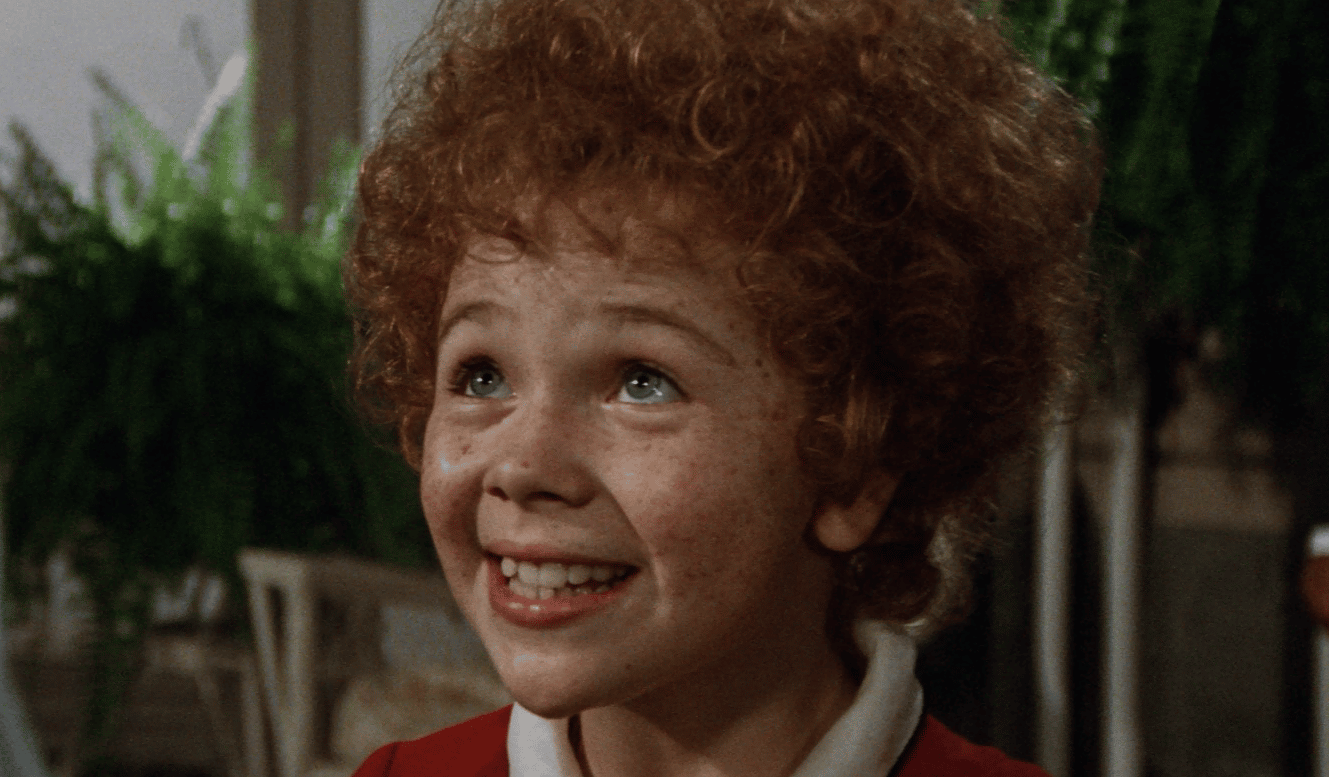 Then came the auditions for Annie: the movie. Reportedly as many as 8,000 youngsters auditioned for director John Huston and company, before the then-eight-year-old Quinn was cast. This required a bit of a makeover: Quinn’s hair is naturally straight and brown, a far cry from the tight red curls which are the character’s signature, hence she had to wear a wig.

As a veteran of the stage show, Quinn had an advantage over her Annie leading man Albert Finney, who despite his years as an actor was not experienced in musicals. Happily, other cast members including Carol Burnett, Bernadette Peters, Tim Curry and Ann Reinking were seasoned Broadway performers who knew a great deal about singing and dancing. 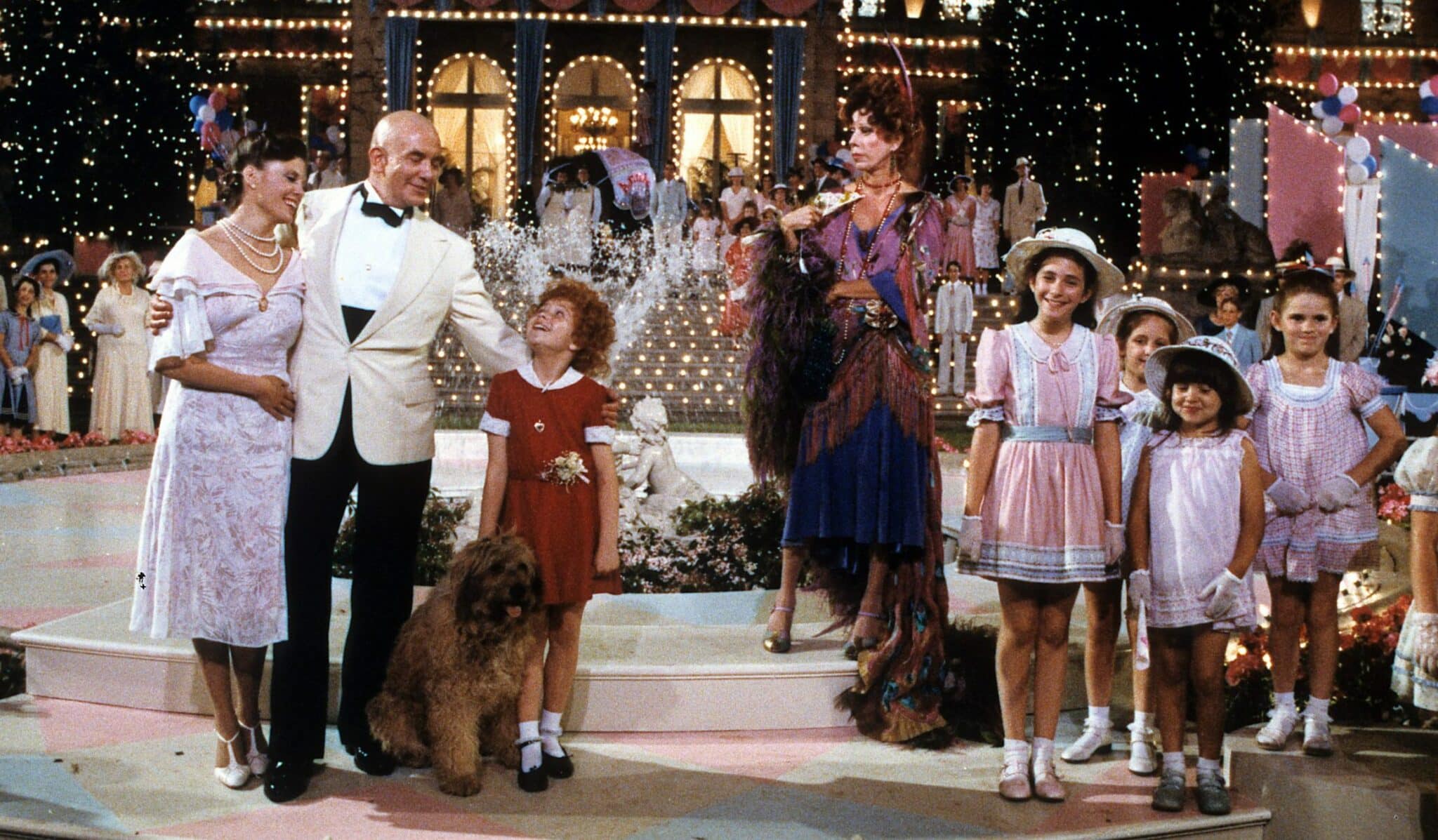 Annie was a risky venture for studio Columbia Pictures at the time. With a budget of $35 million, it was the most expensive big screen musical ever made up to that point, and the popularity of the genre was on the wane with cinema audiences.

The film was ultimately met with lukewarm reviews and, with box office earnings of just over $57 million, it failed to break even (movies generally need to make at least double their budget back to be in profit). However, Annie proved to be one of those films that flopped on release only to be re-assessed as a classic in the years that followed.

John Huston’s Annie film found its audience through home video and television, and to this day songs like Tomorrow and It’s the Hard Knock Life remain popular. It’s been remade twice, once as a 1999 TV movie and later in 2014 with Jamie Foxx and Quvenzhané Wallis – but still, when we think about the character of Annie, Aileen Quinn is the actor who comes to mind. 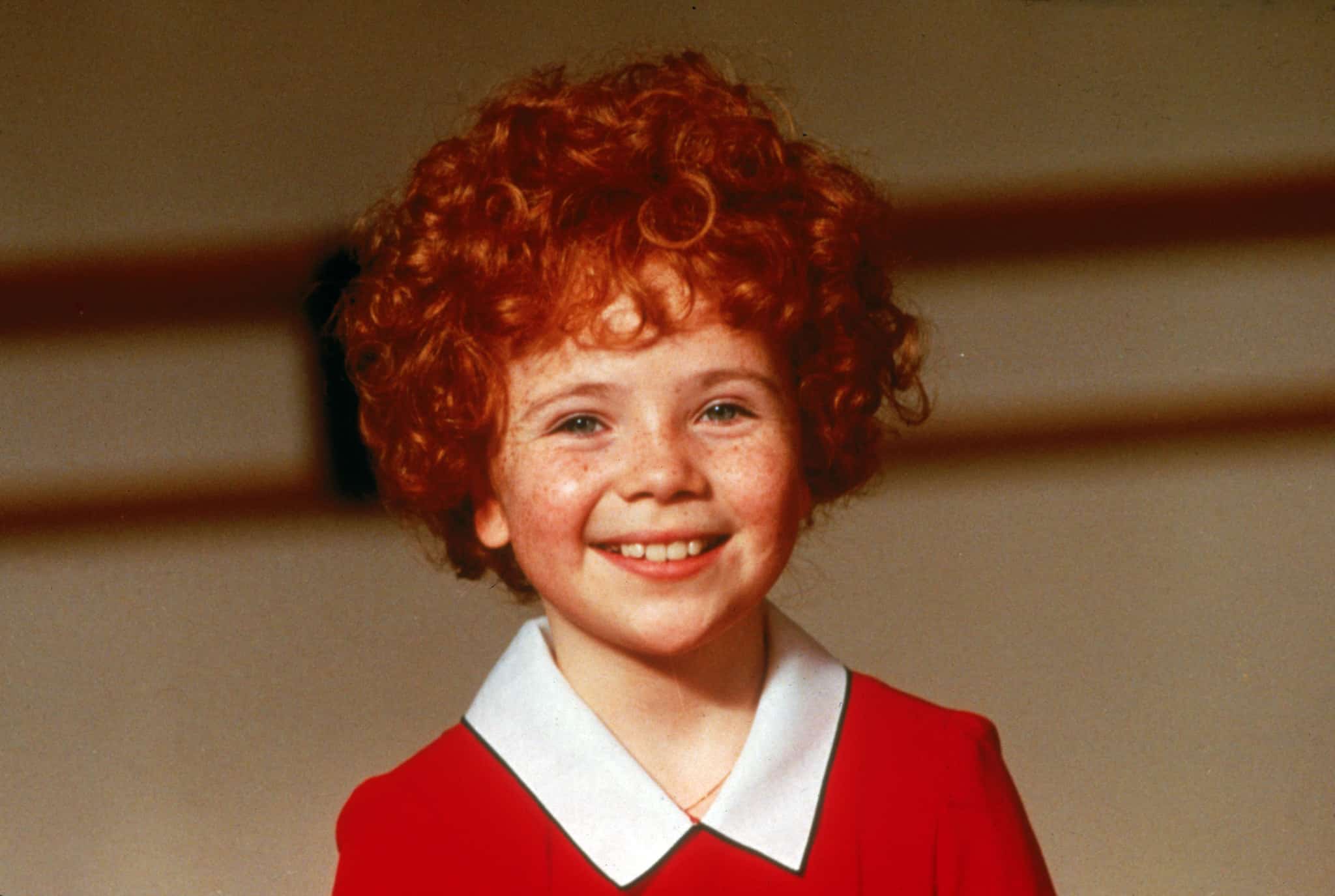 Originally, Annie was supposed to be the first of many Columbia Pictures productions for Quinn, who had signed a multi-picture contract with the studio. An Annie sequel was on the cards, but failed to take shape. Quinn kept busy though, releasing an album of cover versions, appearing in further stage musicals and lending her voice to a 1982 animated take on The Wizard of Oz.

However, Quinn would not take another live-action film role until four years after Annie, in 1986’s The Frog Prince, a low-budget feature from infamous production house Cannon Films. Though it also boasted an early appearance from future Oscar-winner Helen Hunt, The Frog Prince came and went without a trace, and proved to be Quinn’s last film appearance as a child actress. 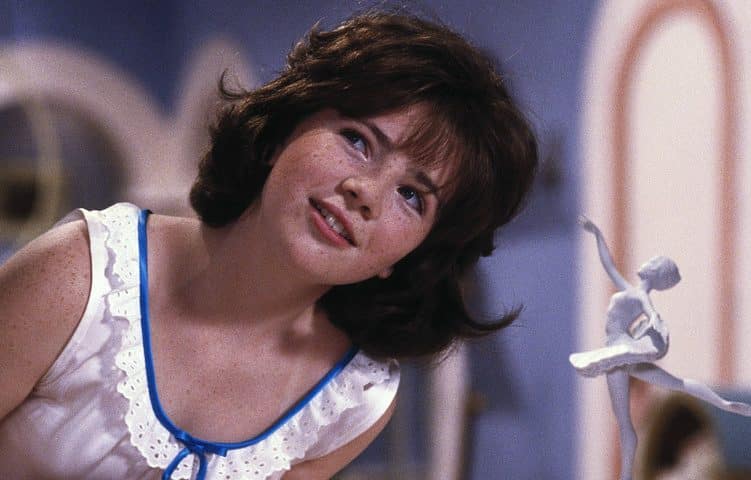 Like many of her peers, Quinn consciously stepped away from performing to concentrate on her education. Quinn ultimately graduated from New Jersey’s Drew University in 1994, aged 23. She then returned to theatre, again appearing in many stage musicals including Fiddler on the Roof and Saturday Night Fever.

Quinn even appeared in later productions of Annie, taking the Bernadette Peters role of Lily. Quinn remarks of playing this role, “the strangest part was when I had to kidnap Annie. It was like kidnapping myself.” As an adult, Quinn has also pursued music further by fronting her own band, Aileen Quinn and the Leapin’ Lizards. 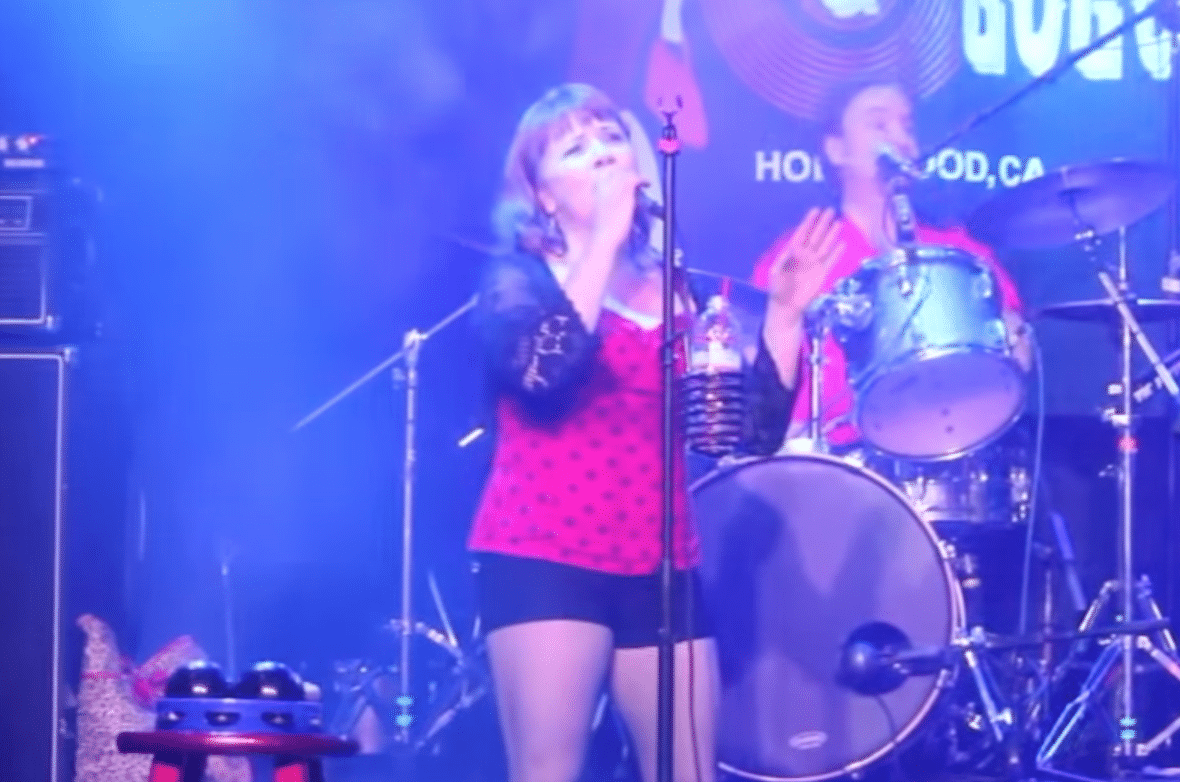 Quinn has described the Leapin’ Lizards’ music as “rockabilly, swing and blues, really fun,” and the band have independently released two albums of original compositions. Quinn has expressed hopes of breaking back into film and TV acting, but to date she’s garnered only four credits in adulthood, including 2010 film Multiple Sarcasms and a 2020 episode of Will & Grace.

Instead, Quinn has primarily moved into teaching, initially in a school – she was formerly a Spanish, drama, and dance teacher at Hudson Catholic Regional High School in Jersey City – before working her way up to becoming an adjunct professor of theatre at New Jersey’s Monmouth University. Curiously, this very institution had previously served as a shooting location for the film that made Quinn famous so many years earlier. 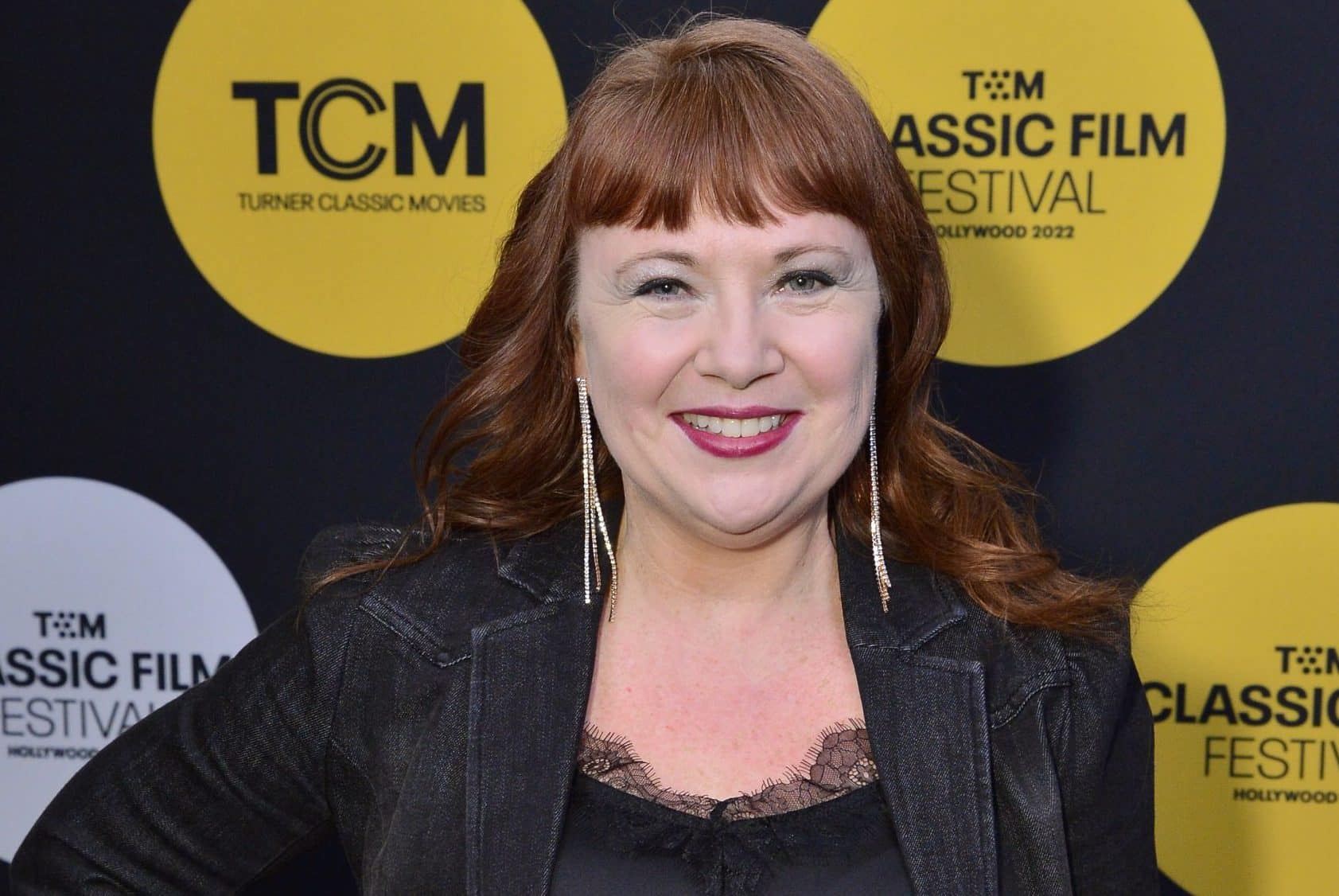 Reflecting on her brief stardom, Quinn says her failure to launch post-Annie “was a blessing in disguise. I was able to grow up, have a normal life, date and see the world, which felt right to me.”

She also has no qualms about still being associated with the 1982 film: “It’s really about love and acceptance, which we so greatly need these days… I’m proud of it.”