9 Huge Gaffes You Never Noticed In Game Of Thrones

There’s no doubt you’ll have heard all about it by now, and it’s true: a Starbucks coffee cup did indeed make an appearance in the latest episode of Game of Thrones.

So what was a paper cup from the world’s biggest coffee chain doing in HBO’s fantasy series, set in the fictional faraway land of Westeros? Was it a cheeky director’s gag, or an in-joke for the cast and crew, perhaps? 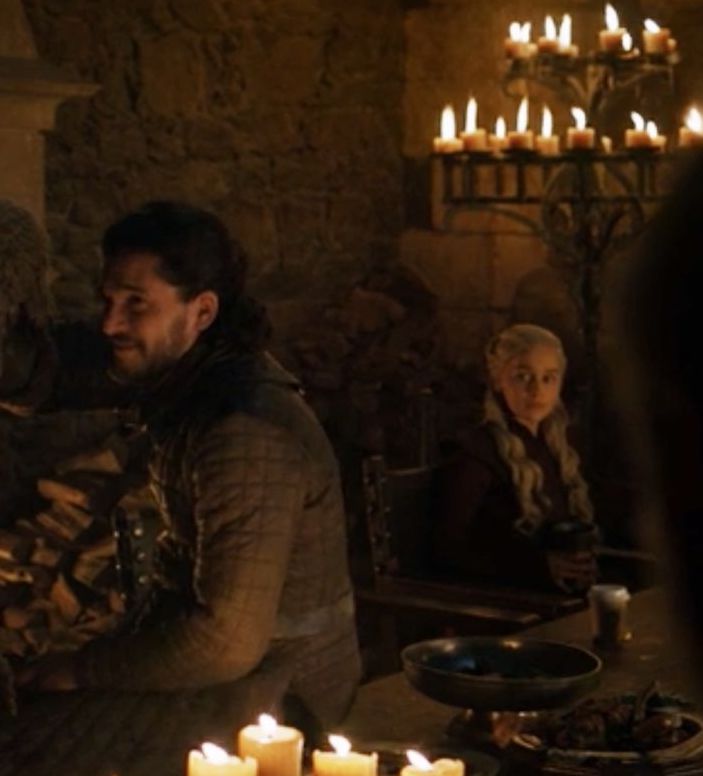 Alas, HBO execs have confirmed that a Starbucks cup made it into season 8 episode 4, The Last of the Starks, through nothing but a sincere error.

It just goes to show that even the most expensive and lovingly crafted show in the world isn’t immune to making mistakes. 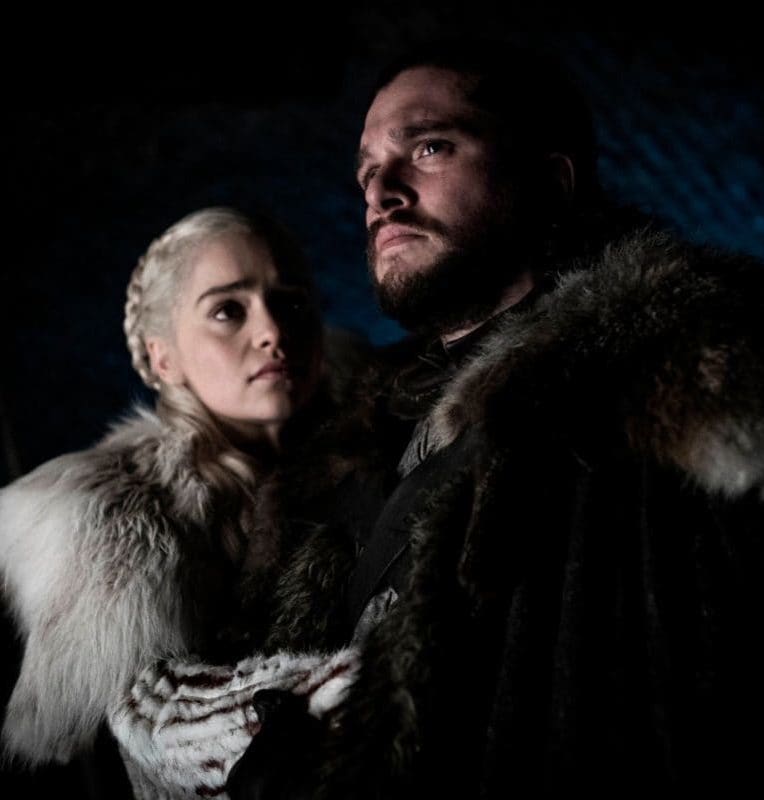 The Starbucks cup cameo isn’t the first time that somebody behind the scenes messed up on Game of Thrones, however – far from it. Here are 9 other notable GoT gaffes.

9. Stannis shows off his mic pack 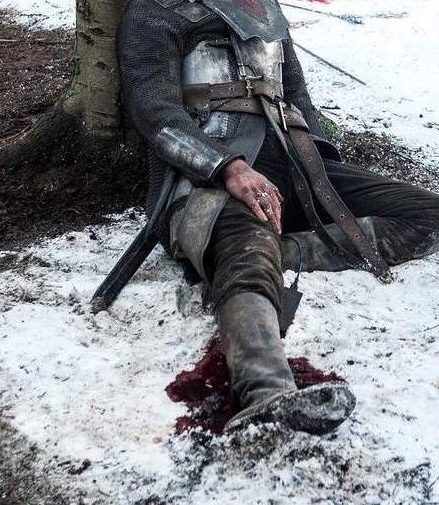 Sure, Stannis Baratheon made his share of mistakes – burning his daughter to death in order to win a battle that he would ultimately lose comes to mind.

Arguably not even the Lord of Dragonstone made as severe an error as the electrician on season 5’s Mother’s Mercy, however. 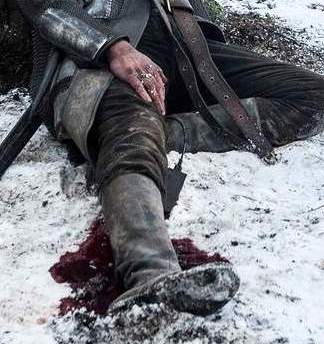 Look closer at what’s lurking under Stannis’ leg as he lays dying, and you’ll see what appears to be a microphone pack.

8. Jon Snow has a rubber sword 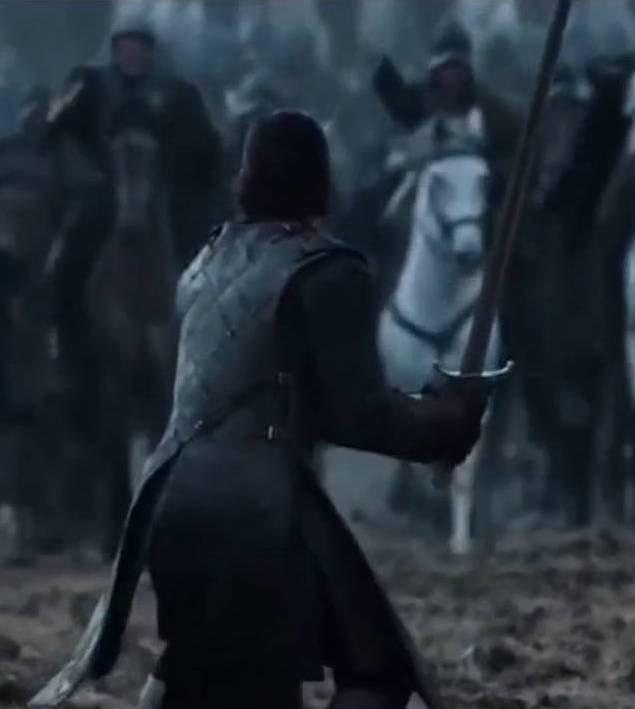 Jon’s longsword might not be as robust as we all assumed, however, at least judging by one moment in season 6’s Battle of the Bastards.

At the beginning of the Battle of the Bastards, as poor Rickon runs from bow-wielding Ramsay towards Jon, Jon mounts his steed with ferocious intent.

The moment is undermined somewhat, however, by the fact that Jon’s sword wobbles so damn much, almost as if it were made of bendy rubber.

7. George Bush’s head on a spike 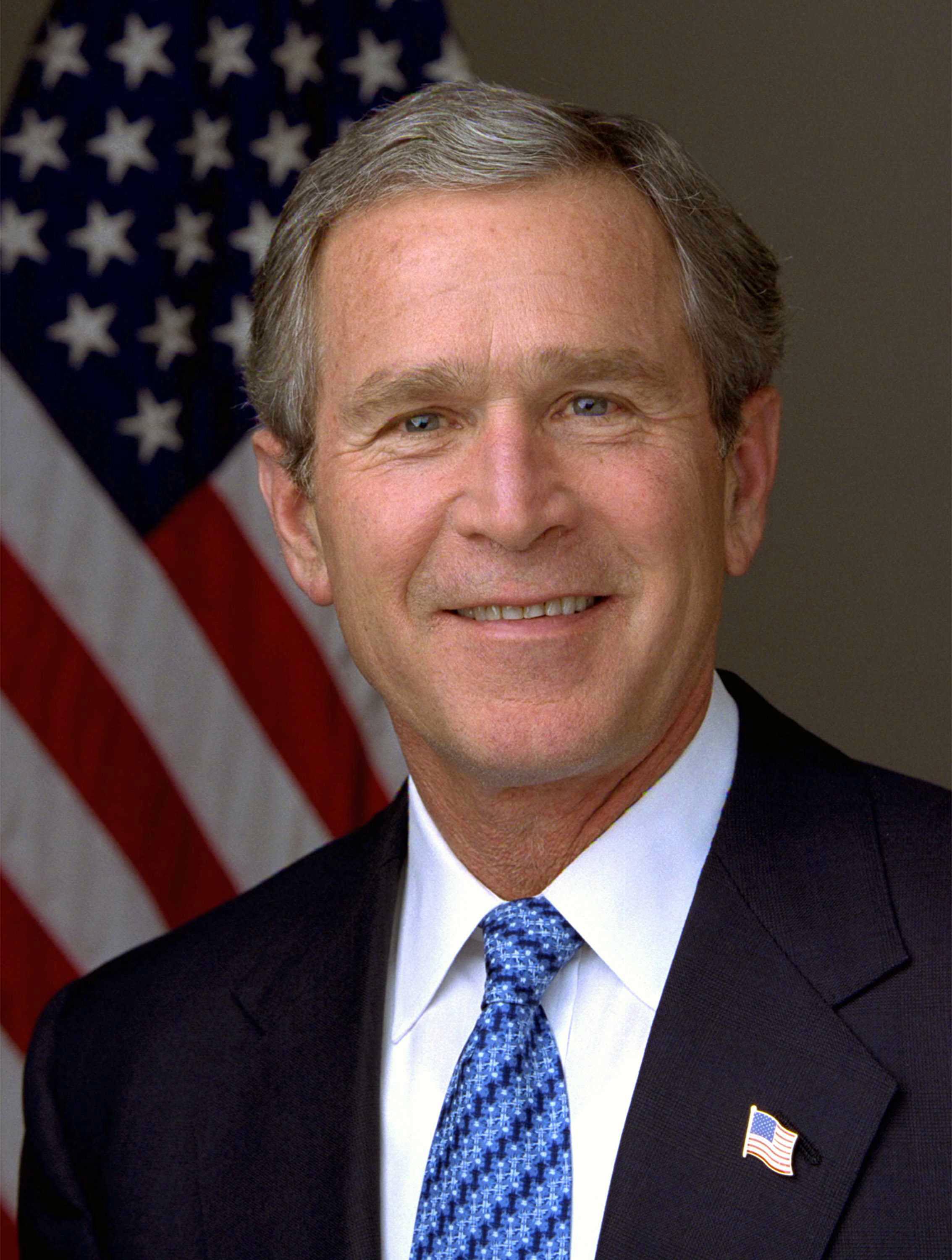 In a statement made by the pair in 2012, Game of Thrones showrunners David Benioff and DB Weiss were forced to admit where they sourced their props, with a particular focus on body parts.

“We use a lot of prosthetic body parts on the show: heads, arms, etc,” the pair explained. “We can’t afford to have these all made from scratch, especially in scenes where we need a lot of them, so we rent them in bulk.” 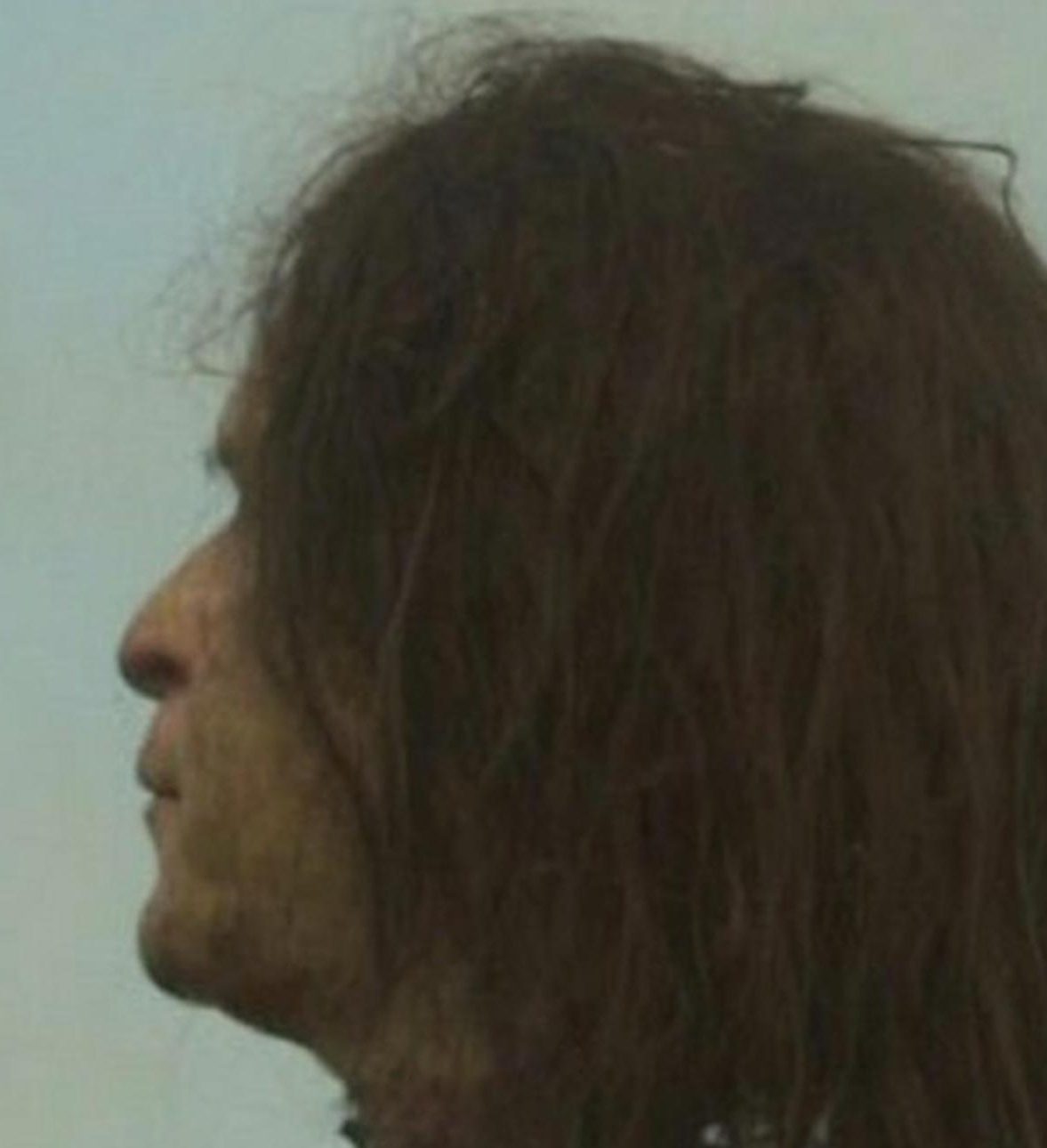 This was Benioff and Weiss’ way of clearing up how a head made in the likeness of George W Bush ended up on a spike in season one.

The scene has since been edited for subsequent home video releases, so that George W Bush’s head no longer appears.

6. A Kingsguard has trouble with his sword 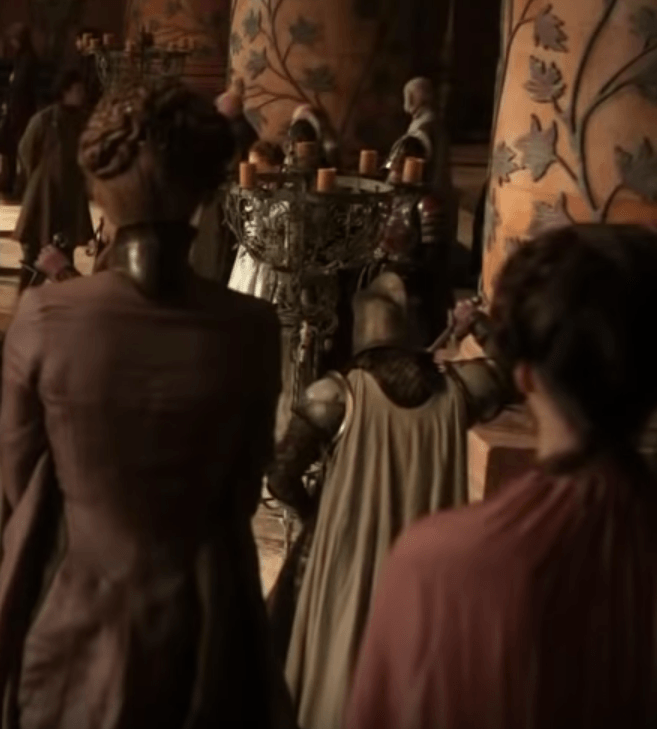 Anyway, we digress. It’s late in season one when Ser Barristan, just dismissed from the Kingsguard, decides to quit King’s Landing, as seen in the clip below.

As Ser Barristan storms out of King Joffrey’s sight, the Kingsguard – sensing danger has passed – put away their swords.

One unlucky extra at the right of the screen appears to be having a little trouble with his sword, however, struggling a good deal to re-sheath it before the show just cuts away to more capable extras. 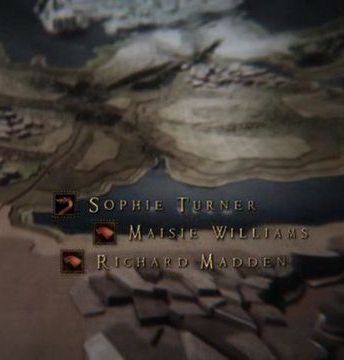 At the beginning of every episode of Game of Thrones, the principal cast members’ names flash on the screen, accompanied by the appropriate house sigil of their characters.

Not so Sophie Turner, at least not in season one, where Turner’s name is matched up with the dragon head of House Targaryen.

Sansa isn’t the only one with an apparently confused heritage, however, with both Daenerys and Joffrey getting the misallocated sigil treatment in later episodes.

In episodes 1 and 2 of season 1, Emilia Clarke is marked as a Lannister, while in season 2, episode 6, Jack Gleeson is down as a Stark.

4. Pilot continuity (it’s all in the hair) 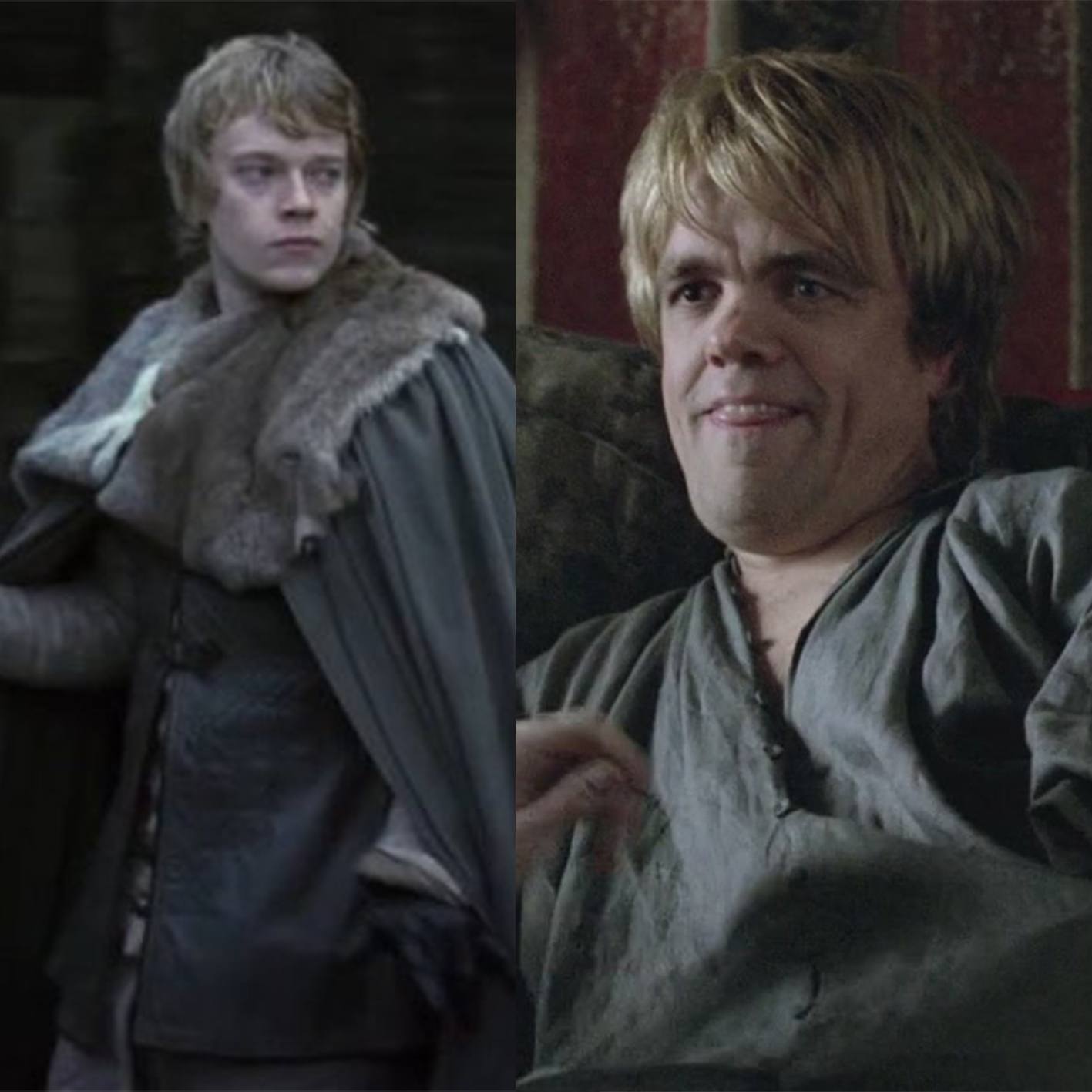 Considering the show’s pilot was filmed twice, once in 2009 and again for reshoots in 2010, it makes sense that there would be some continuity errors in season one’s Winter is Coming, the show’s first ever episode.

Despite much of the episode being reshot, some of the original (apparently dreadful) pilot still makes it into the final cut. 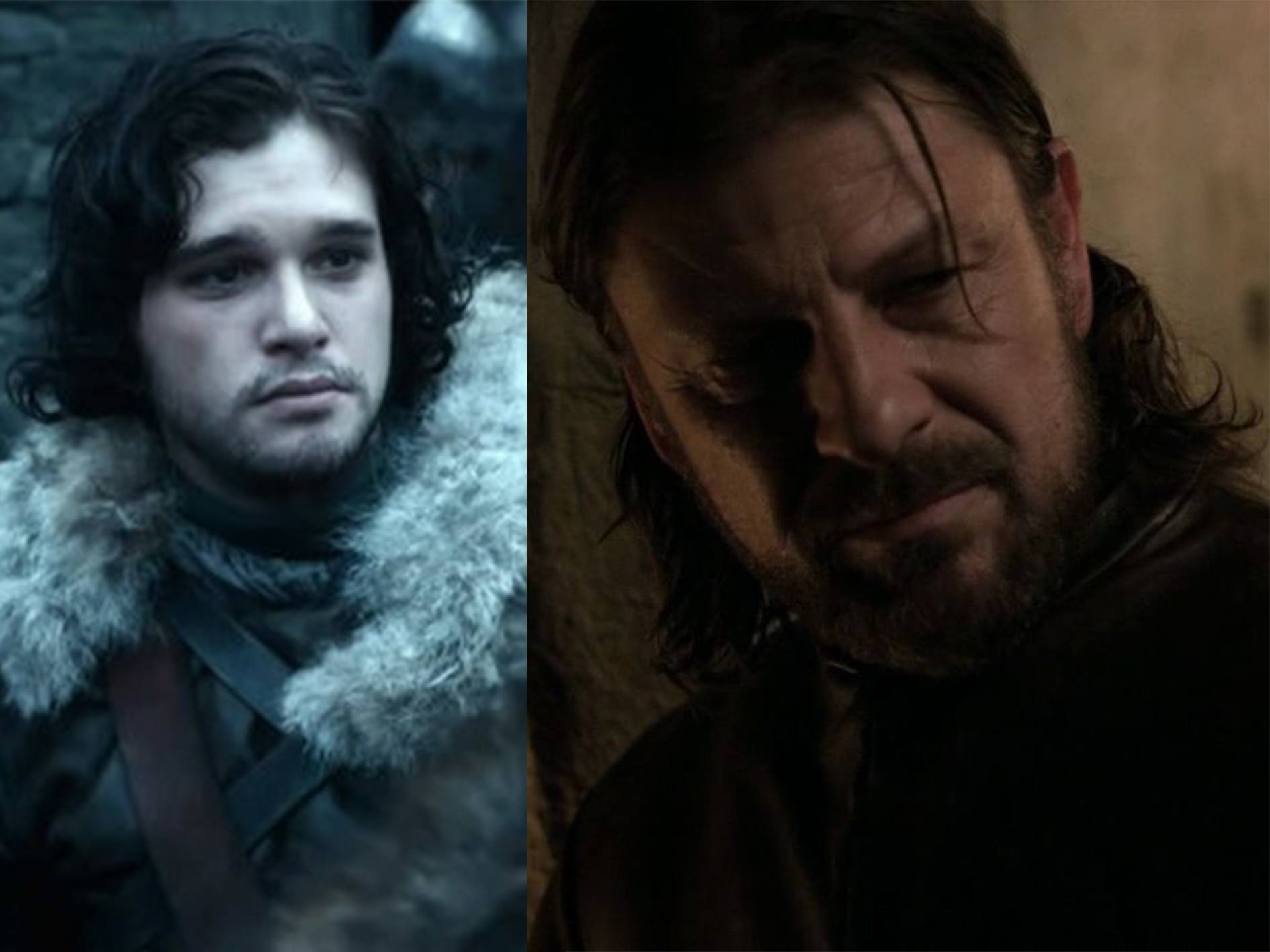 With almost a year in between filming, the actors can look like different people from scene to scene – and it’s all in the hair.

Tyrion and Theon appear much blonder than usual in certain scenes, while some of the actors – Kit Harington included – wear wigs. Ned Stark also seems to have spontaneously ditched his long flowing locks for a greasy mullet in other scenes.

Watching the Game Of Thrones first episode and there a guy in the background with a straight up Patagonia jacket, blue jeans and boots pic.twitter.com/YAFTF4hnIN

More from the pilot episode, this one gets a special mention for how brazen the producers clearly were in cutting corners after they were forced to shoot episode one all over again.

Wandering through the background of one shot set in the North, there appears to be some sort of time traveller. 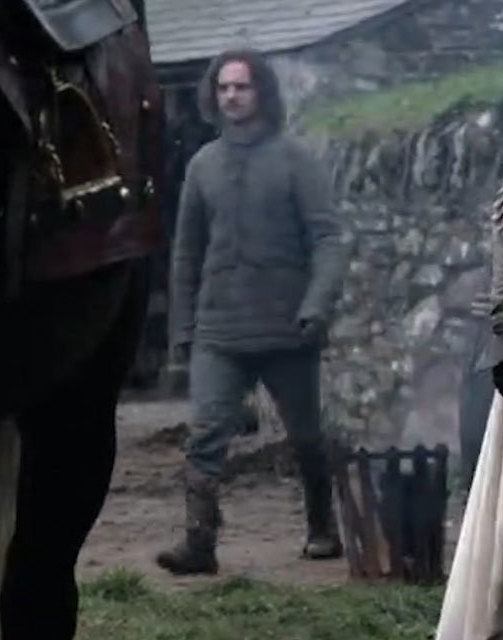 Are those the traditional clothes of Stark country, or are those denim jeans and a modern-looking fleece we see? 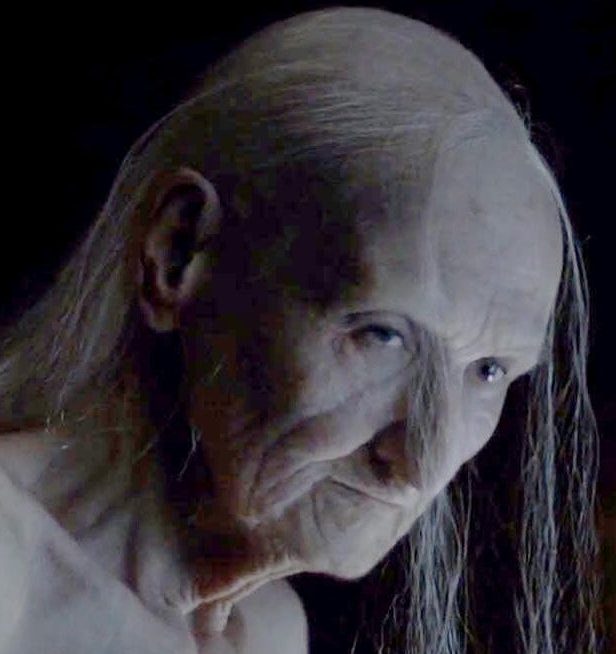 In season 6, episode 1, the mysterious Red Priestess Melisandre finally reveals what that precious necklace of hers is all about.

As she stands before a mirror, Melisandre removes the chain and suddenly transforms back into her true form – that of an old woman. 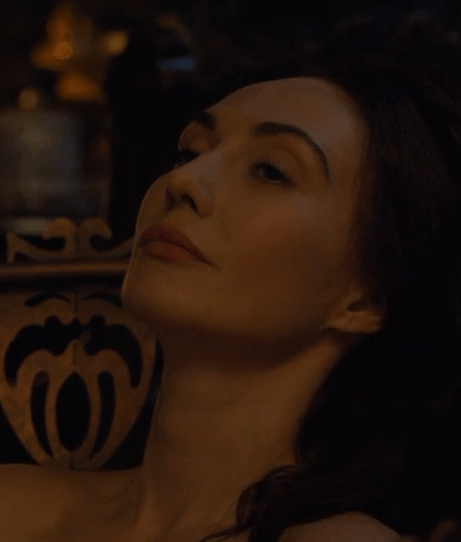 Unfortunately, the show had smashed its own mythology before this scene even happened, by having Melisandre appear sans necklace and still in her younger form notably in a season 4 episode where the character sits in a bath completely necklace-less. 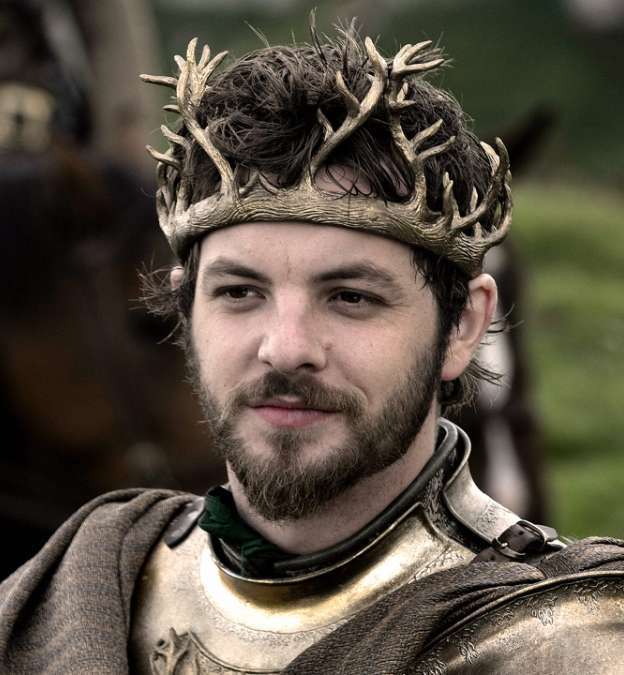 The language and mythology in Game of Thrones is so dense and complicated, it’s no wonder that the actors have on occasion gotten tongue-twisted whilst reading their lines.

One mistake, however, actually made it into the show, and it’s an understandable one, as Renly Baratheon contends with the prospect of discussing Moat Cailin with Catelyn Stark.

As Renly assures Catelyn that Robb will retain power north of Moat Caitlin, actor Gethin Anthony apparently confuses the territory with his conversant.

Instead of Moat Cailin, Renly offers her Moat Catelyn – which doesn’t exist. No wonder he died early.