The day before Thanksgiving in 1971, a short plane journey from Portland to Seattle turned into what would become the subject of enduring mystery. Under the alias Dan Cooper, one audacious thief hijacked flight N467US and made off with $200,000 in government money – either perishing as he escaped via parachute, or landing safely and successfully evading the authorities ever since.

But one of the biggest clues the case would ever scrape together was not discovered by the FBI, nor by the countless amateur sleuths who would become obsessed with the DB Cooper case. Instead, it was uncovered by an eight-year-old boy on a camping trip, back in 1980. 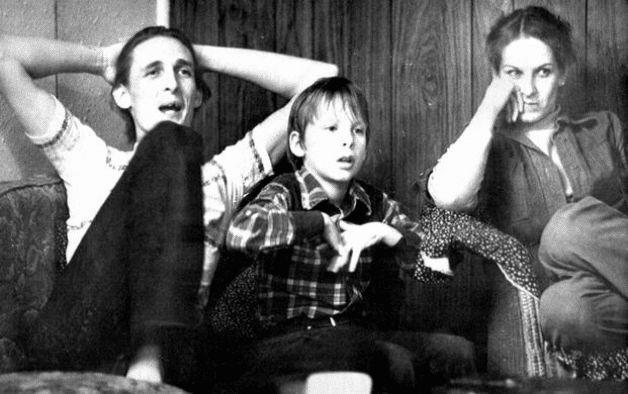 The young Brian Ingram was on a family holiday on February 10, 1980. The Ingrams were visiting the majestic Columbia River, and his family set up camp at Tena Bar, a beachfront nine miles downstream from Vancouver, Washington.

“We were going to make a campfire,” Ingram has since recalled. “My dad was getting ready to put the wood down, and I was smoothing the sand. That’s when I found what felt like old newspaper.”

Ingram pulled out of the sand three bulging packets of cash, all secured with rubber bands. He was astonished to find $5,800 in aged bills – although many were in tatters, or reduced to dusty fragments. His family took his discovery to the local authorities. 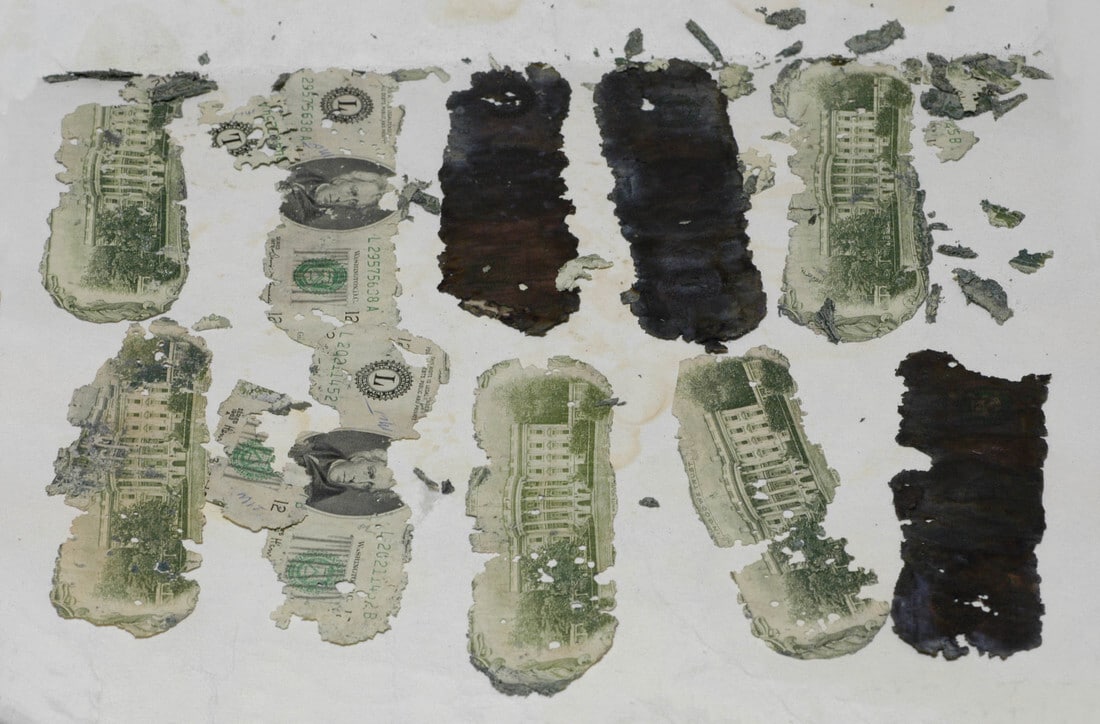 The FBI identified the money as the ill-gotten gains of the mystery man known as DB Cooper, who nine years earlier had parachuted out of a plane over the Cascade Mountains with a small fortune. The FBI was able to match the serial number of DB Cooper’s cash to Ingram’s discovery.

Today, with over 10,000 unique serial numbers on DB Cooper’s notes, anyone can check whether they are holding Cooper’s cash via an online database. However, none of the other bills have ever resurfaced, meaning that DB Cooper may have made away with 9,710 bills totalling $194,200.

If DB Cooper did survive his escape, it has baffled many detectives that none of the money he stole was ever found spent. 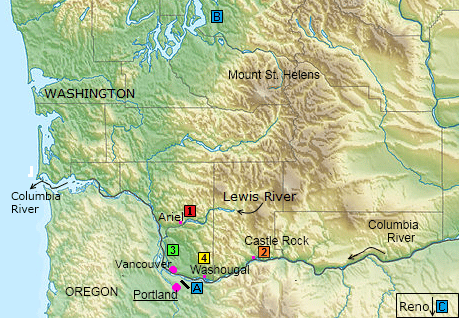 At first, detectives and geographical researchers suspected that the cash found by the Ingrams had floated from a nearby tributary into the Columbia River. The bills’ rounded water damage suggested that they had been deposited by a river rather than intentionally buried.

However, investigators were troubled by this theory because it did not account for ten notes that were missing from a single packet. Geological evidence on the packets also showed that the bills must have been buried long after 1974, following a dredging operation on the river.

It’s not just the fate of the bills that remains a mystery – to this day, nobody knows who DB Cooper really was. With few leads, FBI agent Ralph Himmelsbach – who hunted DB Cooper for nearly a decade – has drawn the conclusion that Cooper was most likely a seasoned criminal and a social outcast: “He was very likely an ex-con who was going to make one last, desperate go for the big one… If he made it, fine. If not, he probably felt he had very little to lose.”

‘I prayed for him’ 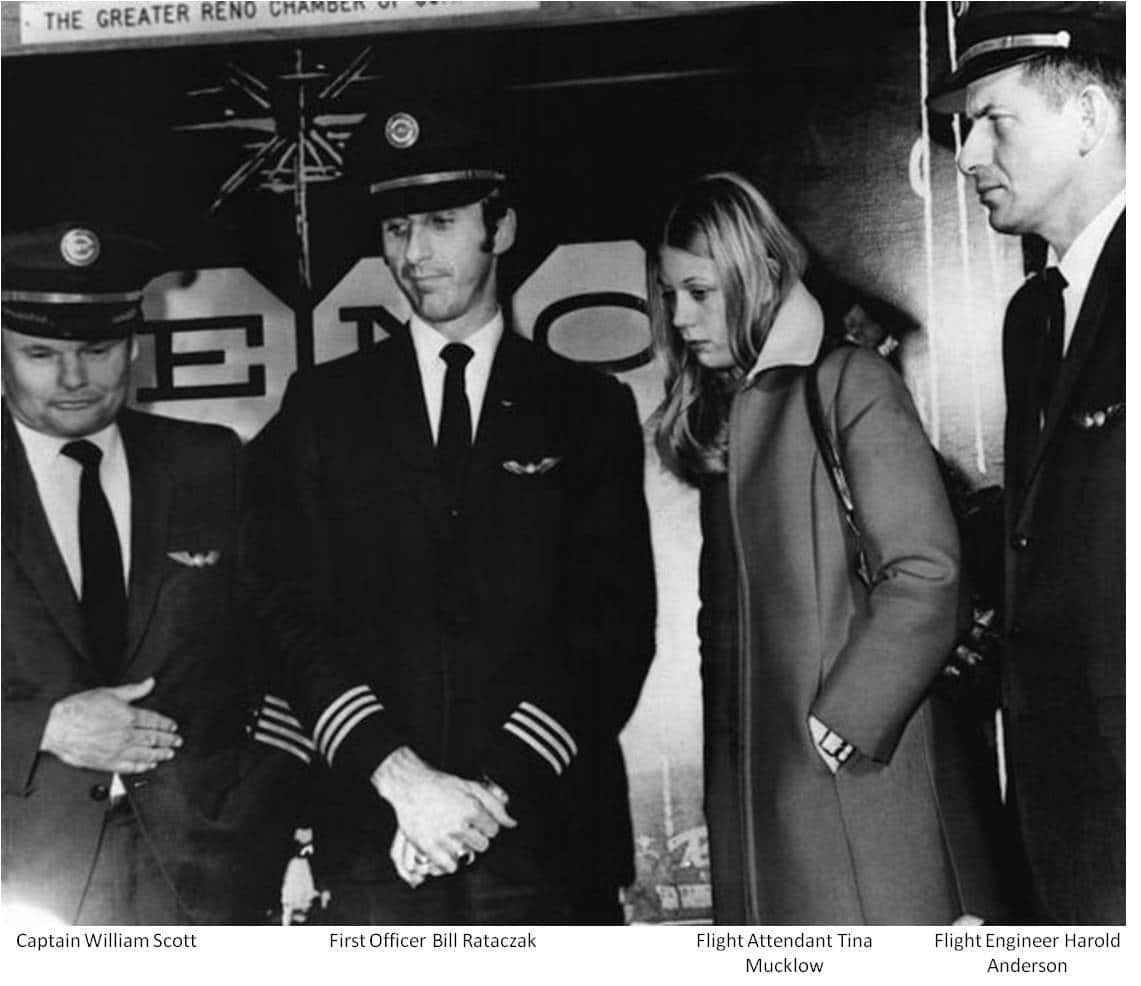 Tina Mucklow was a ‘galley girl’ in the 1970s. A 22-year-old flight attendant, she served drinks to Northwest Orient’s clients before their planes took off. On the afternoon of November 24, 1971, she was working on a Boeing 727, the N467US, on a short flight from Portland International Airport to Seattle.

Working alongside her was fellow flight attendant Florence Schaffner, who started acting strangely as the plane took off. Schaffner sat down next to a male passenger, and then beckoned Mucklow over and pointed to a note on the floor. In elegant handwriting, it stated: “Miss I have a bomb here and I would like you to sit by me.”

Realising that the male passenger was a hijacker who had approached Schaffner, Mucklow called the pilots as the man started writing his demands. He asked for $200,000 by 5pm, two front parachutes, two back parachutes and a fuel truck in Seattle. 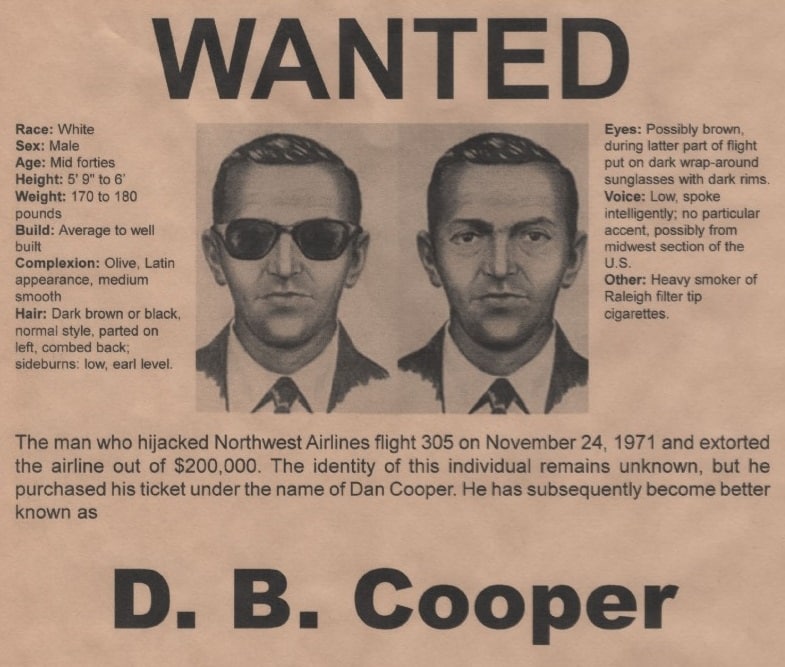 The man wore a dark suit, horn-rimmed glasses and a tie, and he held a briefcase. Not wanting to panic the passengers, Mucklow quietly swapped places with Schaffner and looked inside the suitcase. She saw what appeared to be a bundle of wires and dynamite.

Schaffner sat politely beside the man and communicated his demands to the cockpit. “I was there for the hijacker to kind of keep him feeling safe, reassured, comfortable, and not detonating that bomb,” she later recalled to Rolling Stone.

Terrified but stoic, she began to pray. “I prayed for him and for his family, and for forgiveness for him, too,” she has remembered. 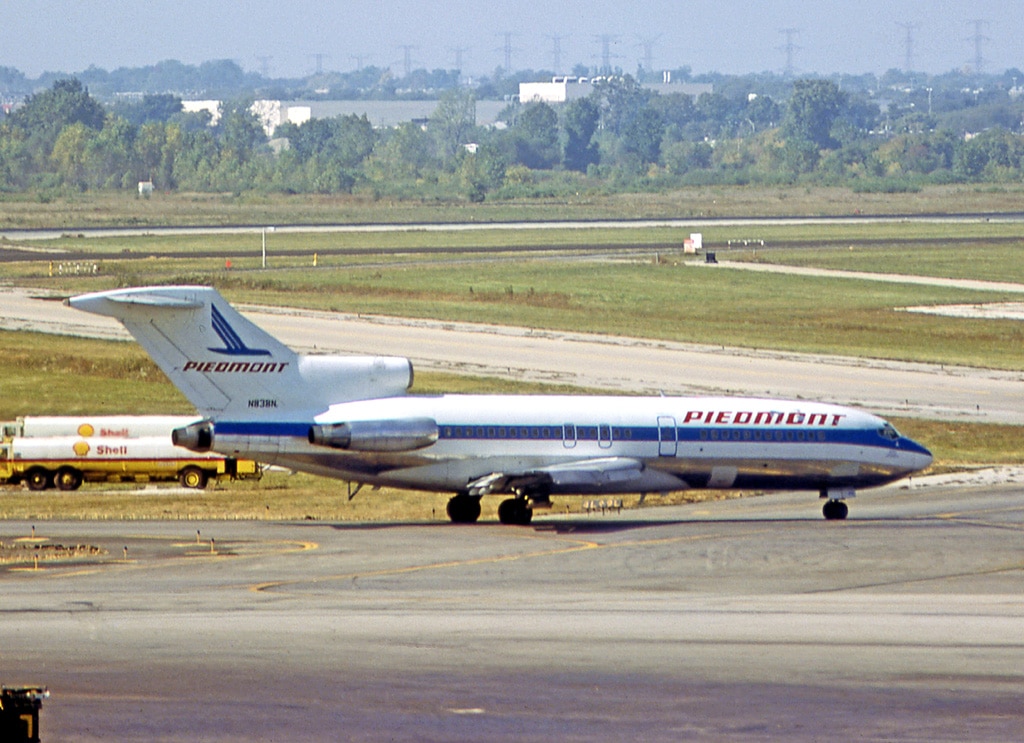 The plane reached the air over Seattle in just 30 minutes, but air traffic control forced the flight to circle overhead as the FBI and Seattle Police rushed to meet the man’s demands.

A lightning storm broke out, and co-pilot Bill Rataczak lied to the passengers about the plane’s strange movements to prevent a panic. He told them the plane was suffering from a mechanical fault and needed to burn off fuel before landing.

In fact, the passengers were clueless about the hijacking even after they disembarked at Seattle-Tacoma Airport. After the passengers left, Mucklow’s ordeal was far from over. Once on the ground, she was the one tasked with bringing the money and parachutes back to the hijacker and waiting with him for the plane to refuel. 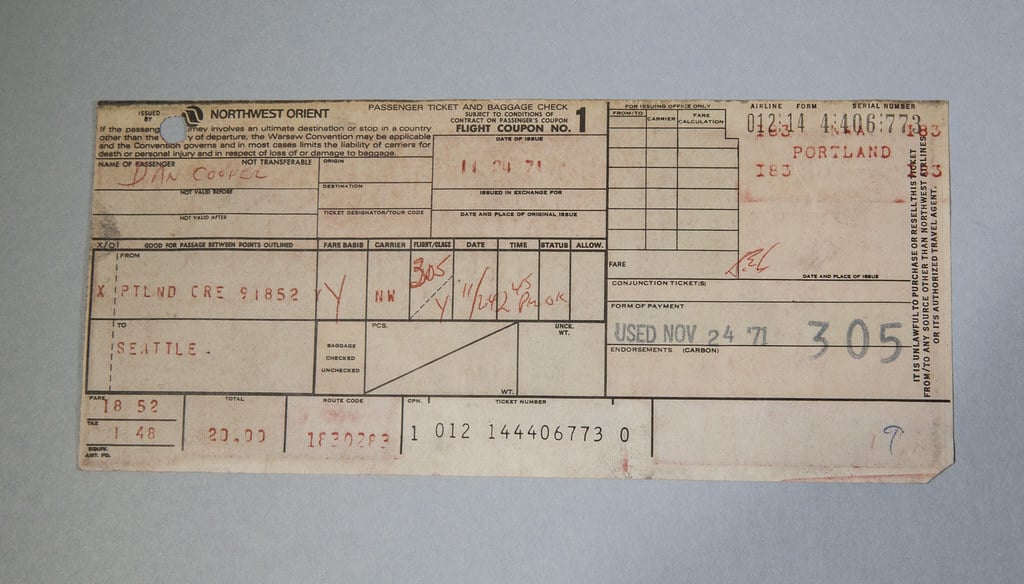 On the hijacker’s orders, Mucklow and three pilots then launched the plane again at around 8pm, heading towards Reno, Nevada.

Five minutes into the flight, the hijacker calmly told Mucklow that she could join the pilots in the cockpit. As directed, the infamous DB Cooper plane landed safely in Reno, where staff could finally search the plane – and they found no trace of the sole passenger. He left behind two of the four parachutes, having repurposed one of the parachute knapsacks to secure the government cash and having used one for his mid-flight getaway.

DB Cooper jumped out of the plane into the stormy night, at an unknown point over southwestern Washington State, somewhere in the Cascade Mountains. At the time, the plane was at an altitude of 10,000 feet. He used a white nylon civilian parachute.

It was found that the passenger had purchased his plane ticket under the name ‘Dan Cooper’. Detectives have since theorised that he borrowed this alias from a Belgian comic series hero of the same name (the comic character is a test pilot). A media miscommunication morphed this alias into ‘DB Cooper’ in the following weeks, and the name stuck. According to the flight attendants’ best estimates, DB Cooper was about 45 years old when he hijacked the plane. He was about six feet tall, with dark brown hair, brown eyes and an olive complexion. If DB Cooper has survived to this day, he would be in his mid-90s.

Various people have claimed to be or to know DB Cooper over the decades. Suspects have included military veterans, ex-convicts and pilots. But the FBI has never discovered the true identity of DB Cooper.

Several newspapers received taunting letters from people claiming to be DB Cooper. “My life has been one of hate, turmoil, hunger and more hate; this seemed to be the fastest and most profitable way to gain a few fast grains of peace of mind,” one such letter read. 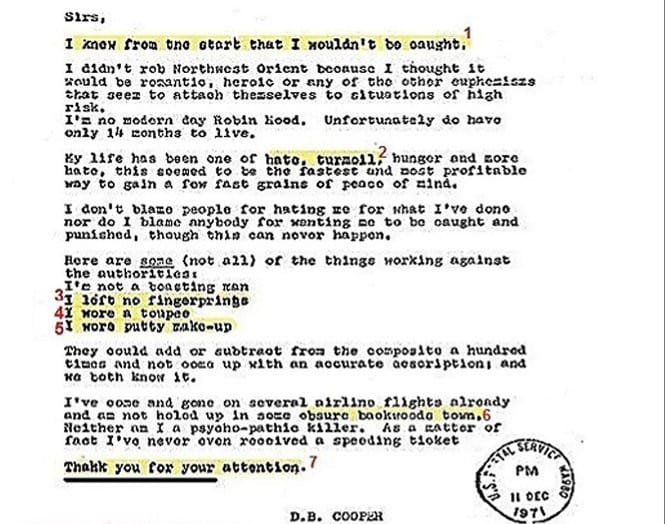 The DB Cooper case remains open, although the FBI are no longer actively pursuing it. If DB Cooper is ever identified, he could still be charged with extortion, which carries no statute of limitations.

Despite DB Cooper’s violent threats, and the distress he caused to ordinary working people on that fateful flight, his audacity has won him considerable admiration among the general public.

Capturing the public’s imagination, this figure has resurfaced in fictional works including 30 Rock, Loki and the 1981 movie The Pursuit of JB Cooper. 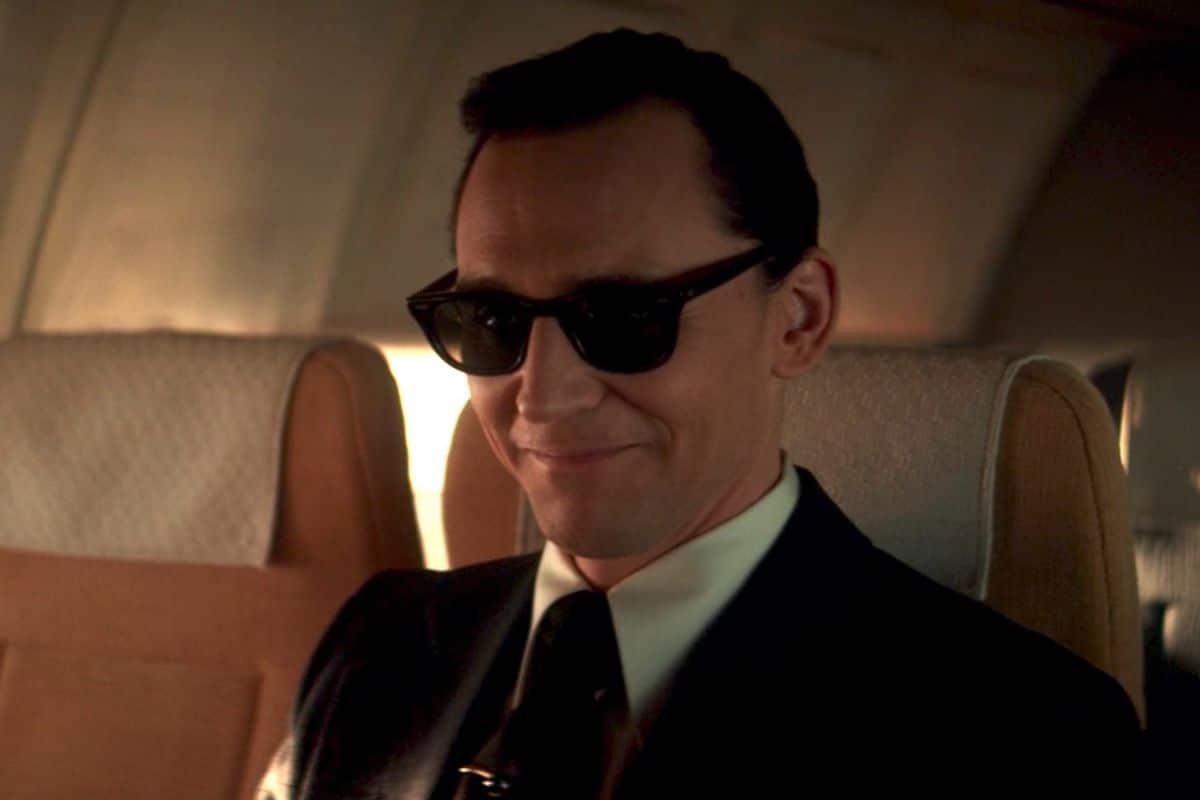 Otto Larsen, a sociologist at the University of Washington, has studied the DB Cooper case closely. “[It was] an awesome feat in the battle of man against the machine – one man overcoming technology, the corporation, the establishment, the system,” he has said.

“Thus, the hijacker comes off as a kind of curious Robin Hood, taking from the rich – or at least the big and complex,” he noted. “It doesn’t matter whether he gives it to the poor.” Over the decades, DB Cooper’s status as a surprising folk hero has shown no signs of waning.

For Brian Ingram, the discovery of DB Cooper’s cash has a far more satisfying ending. In 2006, Ingram – who was given back $3,000 of the bills he discovered – decided to auction off some of his mysterious findings. He sold 25 of the least-damaged bills, and he and his wife planned to put their earnings into a college fund for their children.