These Classic My Little Pony Toys Could Earn You A Fortune

There won’t be many 80s girls that didn’t own, or at least want to own, a My Little Pony toy when they were growing up. Amazingly, 150 million My Little Pony toys were sold in the 1980s alone, and they’re still being sold today, having first been revived in 1997 and then again for Generation Z in 2003. The hugely popular series My Little Pony: Friendship is Magic came out in 2010. 100 million My Little Ponies were sold between 2003 and 2010, and a further relaunch happened in 2014, with the brand making a whopping $1 billion over the 2 years that followed. 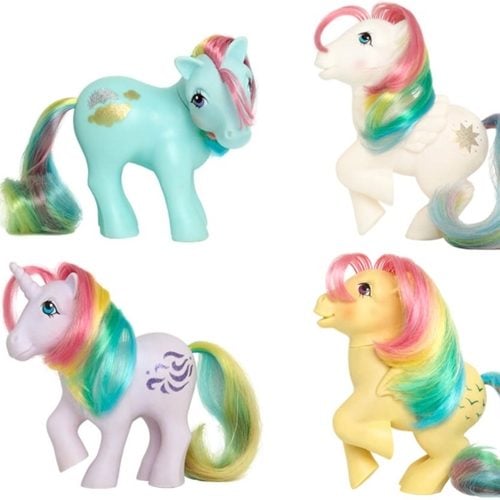 But today we’re mainly focusing on the 1980s vintage pony toys, and we’re sure that many of you will have owned at least one of the original collection that included Snuzzle, Butterscotch, Blue Belle, Minty, Blossom and Cotton Candy.

Because, whilst toy makers Hasbro were constantly adding different collections of ponies to toy shop shelves, from flutter ponies and sea ponies to glow in the dark ponies, scented ponies and fuzzy ponies among many others, it’s the original collection that still holds the most special place in our hearts. 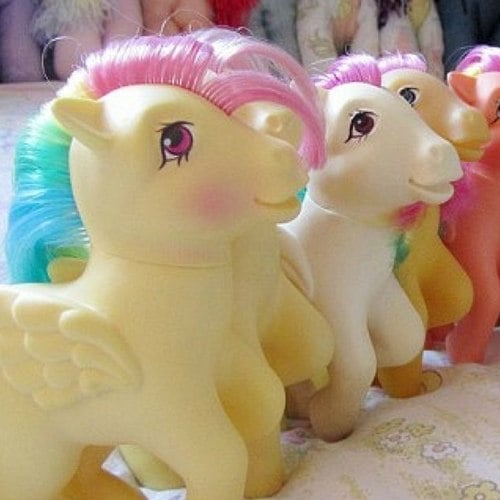 Below are 15 My Little Pony toys that people are willing to buy for a lot of money on auction sites such as eBay. Collectors have flocked to My Little Ponies like any iconic action figures, and sea ponies and flutter ponies were having adventures that were just as wild as GI Joes in our opinion.

Be sure to post a comment letting us know if you still own any of them, and more importantly, if you are willing to sell or buy!

And be sure to share this post with your fellow 80s girls, so that they too can check their loft to see if they own any of these rare vintage steeds! 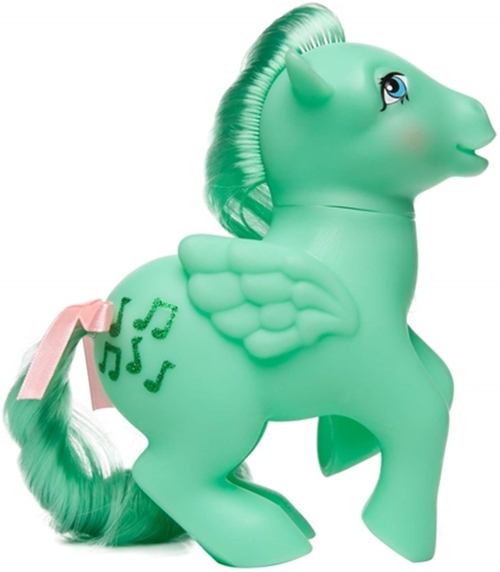 If you’ve been clever enough to keep any of your My Little Ponies in their original Hasbro packaging then well done you, because that increases their worth significantly.

Because for example, people will buy a rare Baby Medley Pony for as much as £700!

The full-sized Medley was also available in the first generation of My Little Pony toys, and she featured in the original TV show. The pretty turquoise Medley appeared in the 1984 episode Rescue at Midnight Castle. 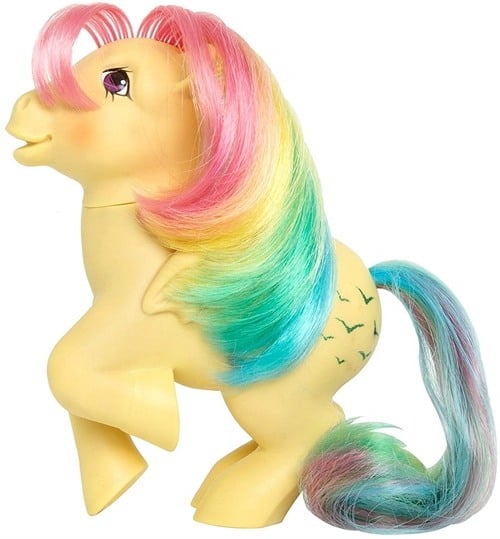 Another example of a boxed Hasbro My Little Pony selling for a significant sum of money is Skydancer.

Skydancers share their name with a classic 90s toy: those Skydancer fairy dolls that launched into the air from a pull-string base. This Pegasus Pony of 1983-84 was inspired by ballerinas.

In the 2010 TV series My Little Pony: Friendship is Magic, Pegasus ponies have wings, more closely resembling their mythical namesake. But 80s kids will remember that the original Skydancer toys, which were created just after Earth ponies, were wingless and rocked a rainbow-coloured mane.

People are asking for up to £500 for the vintage 1980s boxed version of this particular little pony! 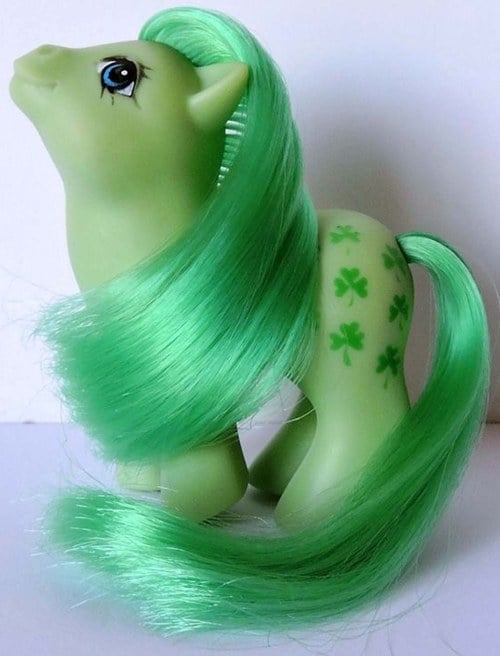 Even if your pony is not in its original Hasbro packaging then it could still now be worth a fair bit of cash. And owners of the rare Baby Minty Pony might get rather excited when we tell them how much she is now worth.

Because collectors and fans have bought and sold this particular little pony for £400. Do you own one? 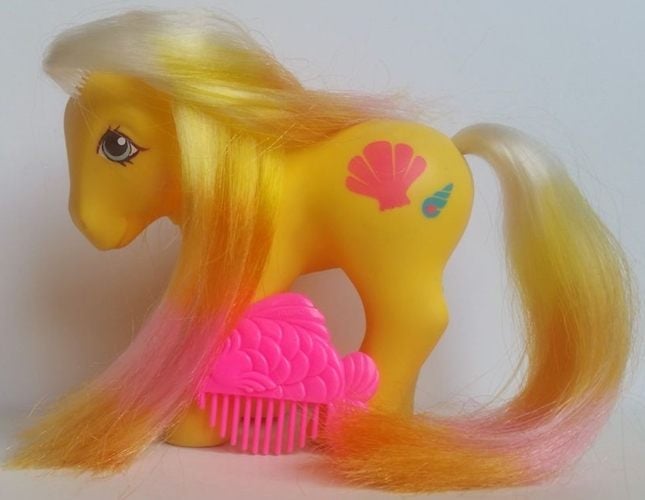 Are you lucky enough to still own the mummy, daddy and baby Sunbright pony toys?

As part of the Generation 1 line of Family Friends and Family Baby Ponies, the Sunbrights (as well as the Berrytowns and Meadowsweets) are unusual in having horizontal stripes in their manes and tails.

The family crops up in the 1992 cartoon episode Ponies in Paradise, where Mr Sunbright makes a living as a pearl diver.

This particular family of toys is now being sold for up to £250 on auction sites such as eBay! 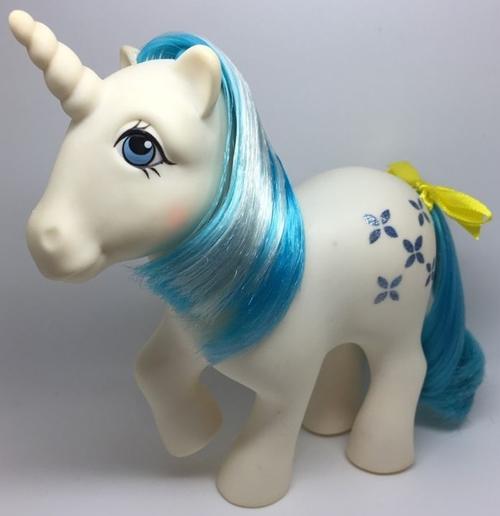 Remember the Unicorn going by the name of Majesty? Do you still have this classic Hasbro toy stored in the loft or in the back of a cupboard somewhere?

Because ones of these beautiful blue ponies was recently sold for a tidy £230 on Ebay!

A Generation 1 pony, Majesty appeared frequently in the original comic book series. She’s a unicorn with powerful magic including the ability to grant wishes. She wields magical horseshoes that allow her to turn invisible.

Her home is the Dream Castle, where she lives with Spike, her pet dragon. In the early My Little Pony books and comics, Majesty deals with the ponies’ mortal enemies by transforming them into trees and statues. 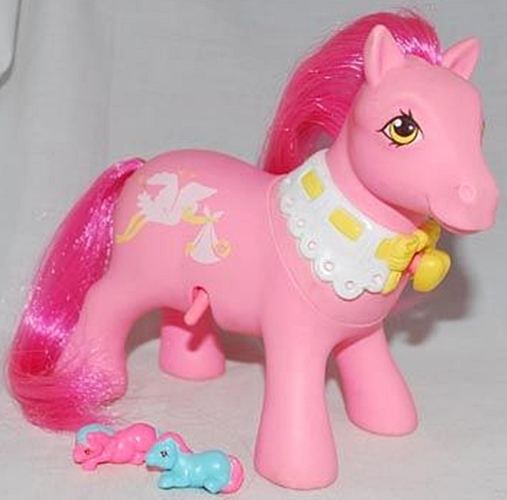 Remember the My Little Pony Surprise Twins? If you still own this trio of pony toys then you’re definitely in for a surprise.

Because this particular Hasbro pony and her two offspring are now being sold for up to £200!

In an unusual but certainly memorable design choice, Hasbro created this pony to give birth. When you press the heart on the mum’s collar, her belly opens up so that you can remove or insert two plastic baby ponies.

The tale on the back of this My Little Pony packaging reveals that the newborn ponies were delivered by Nurse Sweetheart. 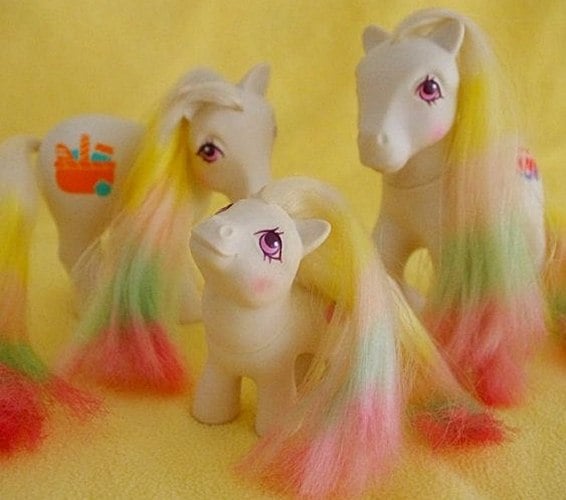 If you don’t own the Sunbright Family then perhaps you have the Berrytown Family instead?

Released in the early 90s, this Generation 1 family strikes three different poses. Baby Berrytown is stamped with a blue and pink tricycle.

If you saved these My Little Pony gems then start celebrating, because they’re extremely sought after. Buyers are willing to pay up to £200! 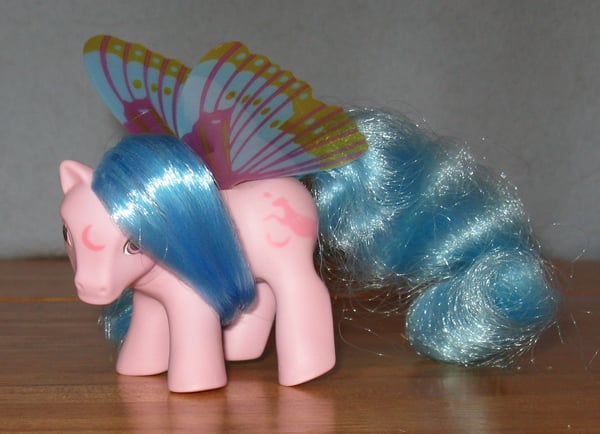 My Little Pony Moon Jumpers in their original boxes will sell for a whopping $510 on eBay!

They belong to the Windy Wing Pony collection of the late 80s, which are instantly recognizable thanks to their butterfly-like wings. On the US packaging, there’s a short story about how Moon Jumper and Flurry traveled through the cosmos.

“Moon Jumper and Flurry loved to gaze at the stars and dreamed of taking a trip to the Milky Way,” it reads. “The wind knew about their dream and carried them up, up, up until they flew over the glowing, yellow moon!

There, they saw a bright sprinkling of white stars pouring a path through the dark sky above them.” 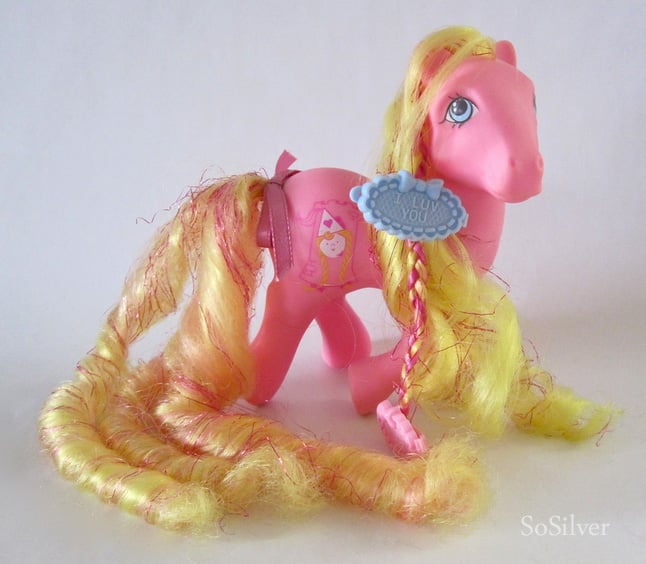 The Rapunzel My Little Pony is so rare, it never even reached toy store shelves. You could only get these ponies by saving up other My Little Pony receipts and requesting this special reward via mail order.

While they originally came with a price tag of $8.95, one of these ponies was recently listed for over $1,500 on eBay. Reportedly, she’s the rarest My Little Pony from the USA.

Twice the length of her body, the toy Rapunzel’s hair cascades over her pink back. This pony is stamped with a figure of a princess in a tower, marking her namesake. 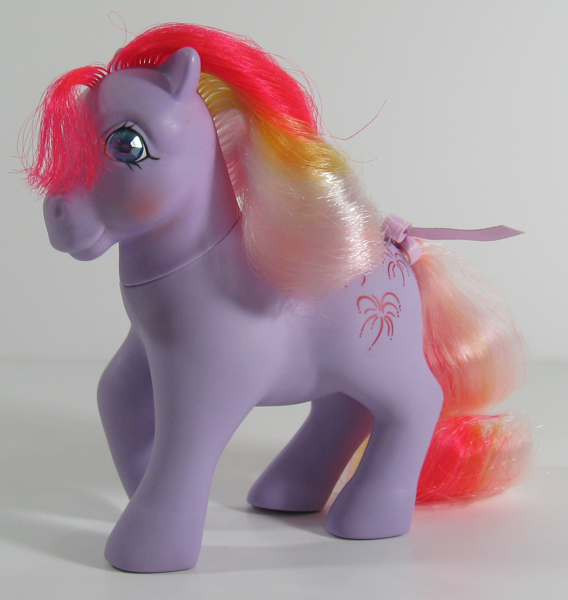 Available in stores from 1986 to 1987, Twinkle Eyed Ponies were a huge hit. As the names suggest, these pretty ponies have tiny gems in their eyes, and they came with accessories: a purple comb and pink hair ribbon. In Germany, these ponies were called ‘augenstern’, meaning ‘star-eyed’.

All of the Twinkle Eyed Ponies have multi-coloured hair.

Today, a number of these toys have reached dedicated collections across the world. They’ve sold for just over $400 on eBay.

Another Generation 1 group, the Twinkle Eyed Ponies included a huge range of characters, from Galaxy and Gingerbread ponies to the Tic Tac Toe pony.

According to the script on the US packaging, Tic Tac Toe loves sunbathing on the beach and marking out her favourite game in the sand. 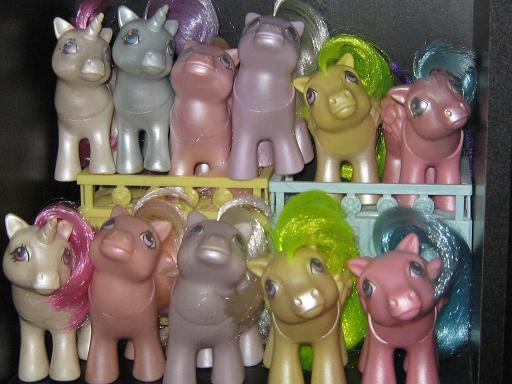 Another mail order offering, the Baby Pearlized Ponies came out in 1988, and were reserved for My Little Pony superfans who collected enough of the brand’s receipts. This rare line of gleaming toys can sell for $245 on eBay.

Miniaturized versions of Surprise, Glory, Cotton Candy, Blossom, Firefly and Moondreamer were all available in this collection. The packaging description sets the Pearlized Ponies on an “island paradise”: “Sail into port and join them for an exotic frolic on a sparkling beach filled with tropical treasures and tall, shady palm trees.” 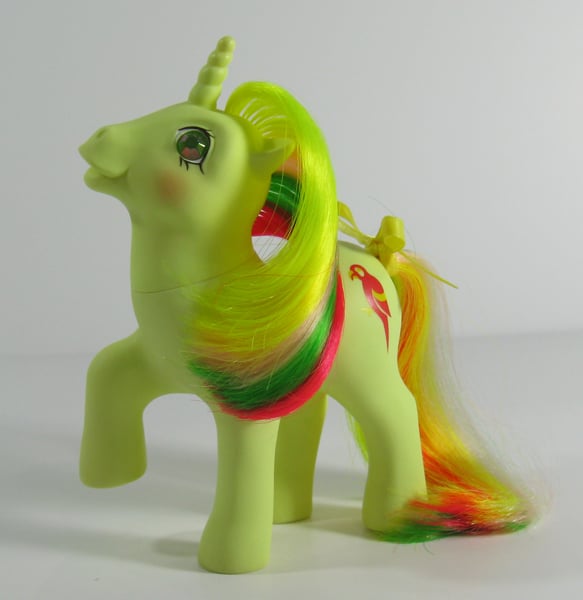 Do you remember the pony Mimic, who was produced as part of Generation 1? With almost lime-green bodies, Mimic ponies are treasured by collectors. Released in 1986, Mimic is now selling for over $200 on auction websites.

With ‘cutie marks’ in the shape of a parrot, Mimics are grouped with the Unicorns line. The character Mimic was introduced to the TV series My Little Pony ‘n Friends in 1987. She stars in the episode The Golden Horseshoes, where the other ponies race to find a cure for her strange illness. 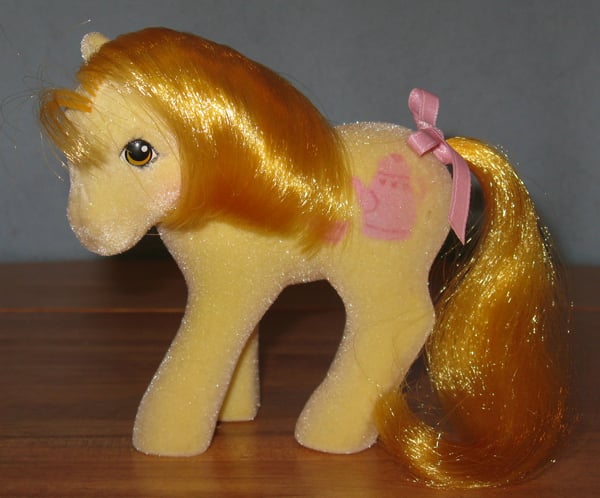 Crumpet’s a So Soft Pony, released in 1986. Unlike their plastic counterparts, the So Soft Ponies were produced with a layer of “flocking” or fuzz all over their bodies.

Since she’s been introduced to modern collectors, Crumpet has been selling for an impressive $250 on the eBay website. With an afternoon tea set for a ‘cutie mark’, Crumpet’s packaging description narrates a picnic and croquet games in the sun. 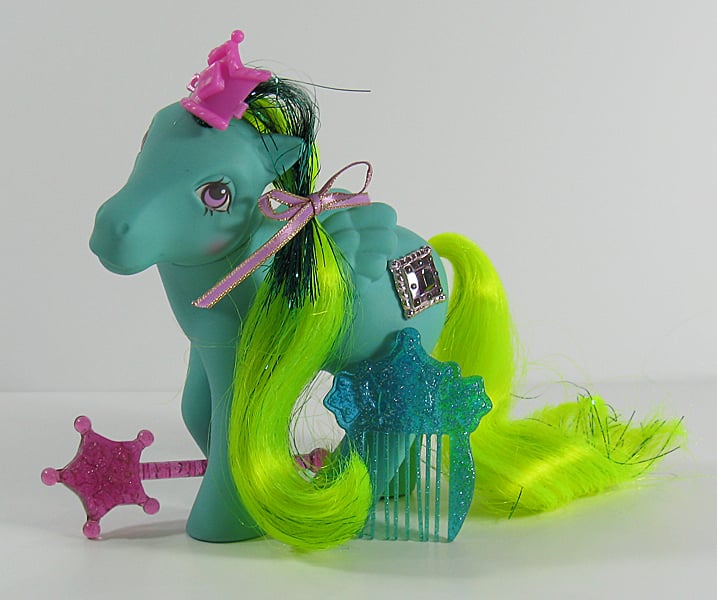 Among the rarest ponies of all time is the colorful Princess Pristina, who went has gone on sale for $575 on the eBay site. Fans will search far and wide for this tinsel-haired pony, whose accessories include a crown, a glittery green comb and a pink wand.

Pristina is a pegasus pony like the aforementioned Skydancer and Medley. The first winged ponies, Pegasuses were the precursor to the hugely successful flutter ponies. In the later TV series, Pegasus ponies have magical abilities to control the weather, fly and walk on clouds. In the show My Little Pony: Friendship is Magic, the pegasus pony Rainbow Dash emerges as a main character and member of the elite flying squad, becoming a fan favourite. 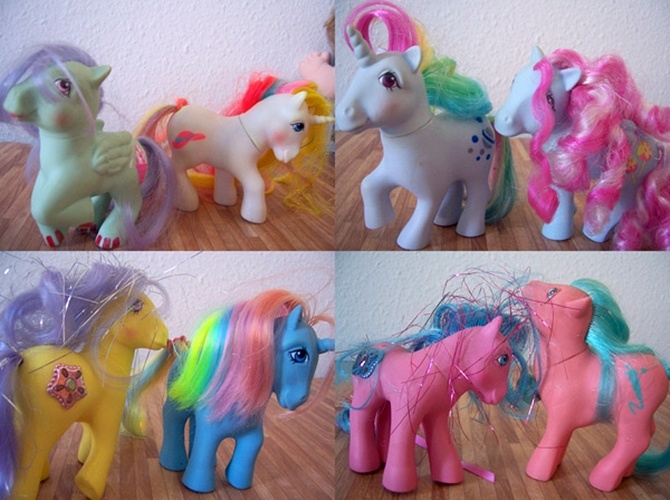 If you were collecting this famous equine brand throughout childhood but you don’t have time to sell your ponies individually, then why not consider selling them as a job lot? These vintage Hasbro My Little Pony toys are being sold to collectors for hundreds of pounds, so it may be worth your time!

Which of these valuable My Little Pony toys are stored away in your attic?