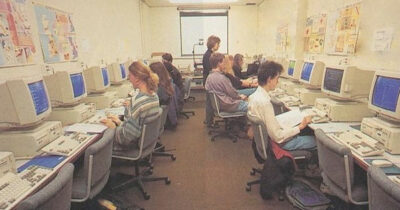 You would have been using landlines and not mobile phones unless you had a lot of money.

In a lot of ways, we were kind of the pioneers for this generation to experience these things.

In any regard here are 32 things that you will remember from those years:

1. You never had a computer but if you did, it was a dinosaur compared to the ones we have today. Look how colourful it is! But also it’s translucency.

You can actual see inside and watch the beautiful mechanisms at work.

The screen is solid glass, akin to something you would find on a television screen.

Thick and chunky, you definitely needed space for this bad-boy.

2. The internet could only be accessed in the “computer room” and the pages took forever to “load”.

Even then, there was nothing more than email and chat rooms to explore.

No one but the kid in “War Games” had any real use for them.

Computer rooms still exist nowadays of course, they’re just a *tad* more modern and you can actually do stuff with the computers you know!

3. If you recall, the internet was by phone line only.  Which means it could only be used when someone wasn’t using the phone and back then, everyone used a phone, for talking to other people!  It’s a lost art. The dial-up tone will be forever ingrained in those of us lucky enough to have witnessed the first dawnings of the internet.

It is very difficult to imagine a time when the internet was in its juvenile state where you couldn’t use it if someone was on the phone.

4. One of the first “go ask” pages was this, “Ask Jeeves”.  I don’t remember asking him anything.  Nobody had that sort of thinking in mind.  “What? Ask a computer? Anything?”  These sorts of ways took time to develop.  Now, I can’t think without thinking of asking the web.

Before Google, there was ‘Ask Jeeves.’

We marvelled at the ability to ask this butler literally anything in the world and for him to come up with the answer!

‘How is this possible?’ we cried, ‘what trickery is this?’ This site still exists, but is now only called ‘ask.’

We’re not sure it does quite as well as Google.

5. I wrote my notes on paper with a pen, keeping them neatly organized in a 3 ring binder and categorized by color. My cursive writing was legible but over time, my hand would cramp from the times I spent away from the page and now, I when I do write, it’s all in BLOCK letters, mimicking what I see on the keyboard of my computer.

Of course, with more and more people turning to laptops, the beautiful artistry in notebooks is becoming a thing consigned to the history books.

6. If essays were typed in the computer, they were printed out and “handed in”. Well this one still happens today, but back then it took a lot longer and just seemed much more novel.

Remember waiting in the queue by the printer as everyone’s work was printed out and trying not to mix yours up with Sally’s from the next computer?

7. Leaving a note on the door usually got the job done in terms of communication. If you left a note on the door for your parents to read, this was usually a good enough way of communicating perhaps something you hadn’t done, or working as an apology.

It meant that when you next saw them, they already knew and you didn’t have to repeat yourself.

8. All the phones were corded to a “landline”.  So, all plans that took place had to stay intact.  There was no changing them on a whim or on the go. Phones that are ‘mobile,’ what are you talking about?

Maybe in the far future, but not today. Yes, back then phones were attached to a line and you couldn’t just take them with you everywhere you went.

This meant that if you made plans, you sort of had to stick with them because there was no way of communicating if something had changed.

9. If got lost out on the town with your friends, you would spend all night searching.

Nowadays of course we’d just give them a quick text or call to see where they are.

But without the liberty of mobile phones, we would spend all night actually looking for them until we eventually bumped into them on the dance floor of some other club.

10. If were inclined to be mobile, you had only room for eight texts but you probably didn’t have any friends that texted.

If you were luckily enough to have a mobile phone, it was pretty useless to be honest.

It ran out of space very quickly which meant you were constantly having to delete old messages.

11. You mostly used a payphone. Much more common than they are today, for those of you who have never experienced this a payphone does exactly what it says on the tin.

You put in your money and this allows you a certain time period in which you can call…well…anyone you like.

12. And hopefully, you had a pre-paid phone card! This is certainly a very retro thing!

You were able to top up these cards so you didn’t have to keep forking out every time you made a phone call.

13. The hot ’80’s kids’ TV show was Mysterious Cities of Gold was a hot topic during Freshers Week. Plus, you were trying to catch up with every detail and it was excruciating.

Things like, “What school did you attend?” and “What are you studying?”  I’d rather check it out on FaceBook now and call it good!

14.  When it was all over, you’d have a list of all your friends’ phone numbers in one book so that you could keep in touch. Storing your friends’ numbers in a notepad was the equivalent of saving them in your contacts.

Back then it was just the done thing and much easier.

Although, if you forgot to write down the person’s name then it could become a little confusing as to which number belonged to who.

15. Then, you would actually send them letters and keep up with each other’s lives like this.

Writing letters is certainly a dying art, but one that we think should be used much more often.

Everything you wanted to say would be put down in one, long, beautifully sculpted letter and not said over hundreds of annoying texts.

It would give the recipient time to sit down, think, and respond with as much meaning. Bring back the letter we say!

You’d spend hours crafting out a thoughtful and inspiring, electronic note to your friends.

Nowadays, just the letter “K” says it all.

Nobody writes long and meaningful emails anymore, it’s just not the done thing.

17. The notice board held all the latest information. Wanted to know what was going on in your school or village hall?

You need look no further than the notice board. It had all the latest information on it, which would now mostly be found on the internet. You go notice board!

18. The bus schedules and maps were piling up because there was none on the internet.

And you also had to find out bus timetables by looking at the leaflet.

You’d have hundreds of the things, old ones, new ones, all because the internet didn’t hold this information. Even if you hadn’t seen the film, it was cool to have a Pulp Fiction poster up on your wall.

This told people you were edgy and different, even though you weren’t.

Or maybe you just liked Uma Thurman, who knows?

20. Goldeneye on N64 was played by a group of friends. Maybe yours?

This game was very disorientating.

Every room looked the same, the controls were difficult and your enemy’s always seemed to know where you were even if you didn’t.

When playing multiplayer it was easy to cheat and just look at your mate’s screen to see where they were hiding.

21. You were thrilled if you got to watch “Neighbours” twice in one day!

“Neighbours
everybody needs good neighbours
Just a friendly wave each morning
helps to make a better day
Neighbours
need to get to know each other
Next door is only a footstep away.”
Ahhh memories!

“And I said let’s all meet up in the year 2000
Won’t it be strange when we’re all fully grown
Be there 2 o’clock by the fountain down the road
I never knew that you’d get married
I would be living down here on my own
On that damp and lonely Thursday years ago.”

23. Smoking was not “Prohibited” anywhere. Nightclubs, restaurants, you name it!  Everyone smelled like smoke.

I once went abroad to a country where smoking is still allowed in doors.

It was a strange, strange experience, but it certainly took you back a few years.

24. People came to your room just to see your CD collection.

“Do you want to come and see my CD collection?” was not some cheesy chat-up line.

People were genuinely interested in seeing what music each other had.

People liked to show off their collection with pride!

25.  HUGE system stereos that were made to be portable but weighed a ton!

These stereo systems are advertised as ‘portable.’

I mean, I would like to see someone put this in their pocket and go for a nice jog with it.

No, these systems are not portable in that sense of the word.

They are huge, clunky things and usually just stayed in one place.

26. Dual cassettes made it possible to make a “mixed” tape. If given as a gift, it meant a lot of time and effort went into making it for you!

If your significant other gave you a mixtape then it usually meant they likes you – quite a pit!

Yes, you couldn’t just go to YouTube to re-watch your favourite artist in concert.

You had to actually buy a ticket and go and see them live! Imagine doing that.

28. Going to these places became the “thing to do”.

I mean, going to these places is still a thing to do, but back then the fashion was questionable, the music was questionable (we’re looking at you, Aqua) but hey, everyone had a laugh still.

29. If you didn’t go out, you stayed up somewhere, all night, talking. You know, actually talking to people face to face, not over a little screen in your hand.

A few cans of booze was common at these gatherings.

30. No conversation was interrupted by a message. And you weren’t constantly interrupted by people who weren’t there!

Get off your phones and talk to other people who are actually in the room and choosing to spend time with you damn it!

31. Taking photos was rare, really rare and nobody was prepared to pose. Back then, they were taken on an actual camera and people didn’t really pose for them because, well, they would be taken and forgotten about.

32. Therefore, not much photographic evidence back then. Unlike today, where every move you make is immortalized online in one minute.

Also, you couldn’t view your photo to see how it turned out.

You had to wait until they were printed and then store them in a thing called a ‘photo album!’ Crazy right?