Along with Russia and Syria, it’s the one country that seems to be in the news nearly every other day.

If it’s not for conducting nuclear missile tests, it’s because their cheerleaders are causing a stir at the Olympics.

That’s right, we’re talking about the Democratic People’s Republic of Korea…more commonly known to you and I as North Korea. 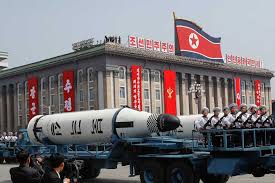 The latest headlines, however, are quite promising. Ahead of a planned summit with American President Donald Trump, due to take place in May, the Supreme Leader of this secretive state has announced that it is suspending all nuclear missile tests…hoorah!

The nation may be one of the most secretive in the world, but we’ve got our hands on some very interesting facts about the mysterious state. 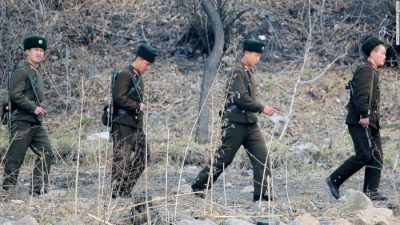 Due to high sociocultural restrictions and long periods of military service, quick sex is rampant in North Korea.

The limited availability of preservatives also combine to worsen the spread of STDs in the country.

2. It Is Considered Taboo To Marry Foreigners 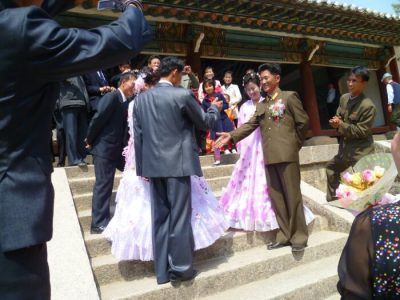 It is not actually illegal for Koreans to marry foreigners, but society does consider it a bit of a taboo.

As an indirect way of discouraging it, the government also imposes strict requirements.

Foreign nationals hoping to marry a North Korean must first apply for official permission from the government and provide numerous amounts of paperwork.

3. Prostitution In Exchange For Food 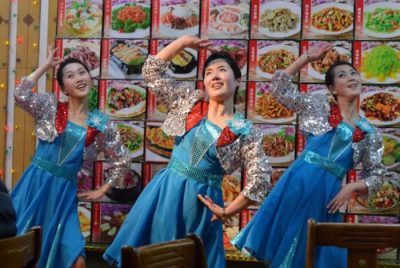 Because of poverty and hunger rate in North Korea, some women will offer sex for the price of rice.

Prostitution is not legally allowed, but poor women use places like train stations to offer a quickie in exchange for food or money just enough to by one unit of rice. 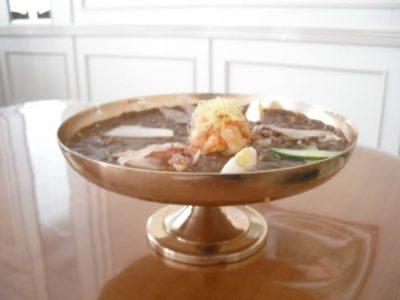 And not even hot ones! A cold noodle meal is the most symbolic dish at a North Korean wedding.

It is quite usual for someone asking someone else on a wedding date to ask: “when can I eat your cold noodles?” which sounds like a horrible innuendo to us.

Also, the newlyweds visit the statue of Kim Il-sung to honour it with flowers and then take pictures. Also you can forget the honeymoon. 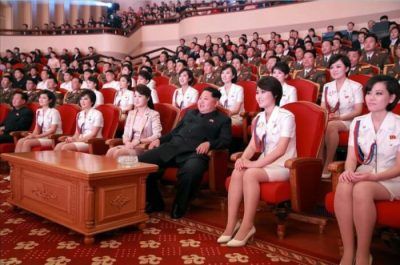 Kim Jong Un will keep as many as 2000 young women close by that he offers to his honoured guests.

It is known as ‘Kippumjo,’ which translates to “Pleasure Squad” or “Joy Division.” The girls can earn things like electronic goods, which are rare in the country. 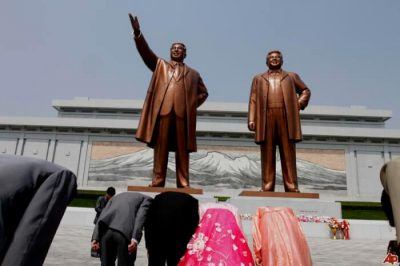 You cannot hold a wedding whenever you fancy in North Korea. They are usually only held in the spring and autumn.

Weddings are also prohibited when Kim has an upcoming important event. People also cannot marry on 15th April or 16th February because these are the birthdays of former leaders Kim Il-Sung and Kim Jong-Il.

7. Keeping Pets Is A Luxury 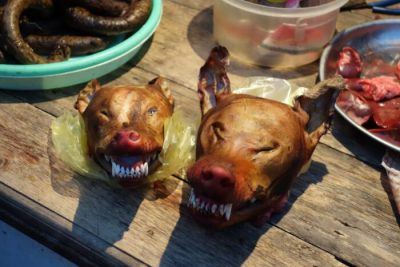 There is no specific law prohibiting it, but keeping pets in North Korea is considered an unnecessary luxury and a burden that can be done without during a time of great food scarcity.

Also, Dog meat is a delicacy in traditional Korean cuisine.

8. Don’t Chicken Out At The Alter 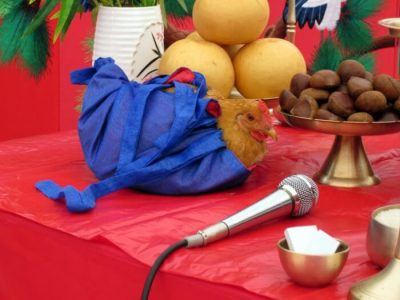 During a traditional Korean wedding ceremony, a live hen and rooster are wrapped in red and blue fabrics and set on a ceremonial tables.

During the service, guests place flowers and dates into the hen’s beak, whilst the rooster’s will be stuffed with red chilli. We can’t imagine the birds enjoy this very much.

9. Only Date If You Plan On Marrying 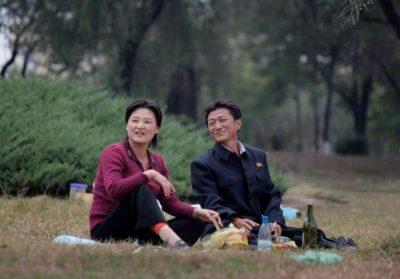 The purpose of dating in North Korean is not just about getting to know someone…it is for the sole purpose of marriage. Homosexual relationships are totally forbidden. 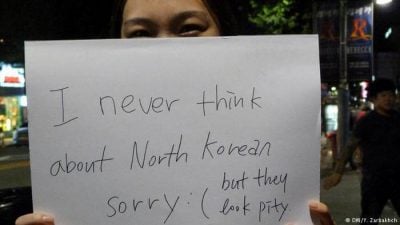 Many things that we take for granted in the West, North Koreans are not allowed to do. This includes things like public displays of affection (including hugging and kissing, even for marries couples,) getting tattoos and having piercings.

These things are all a no-go in North Korea.

11. Only The Best Get Married 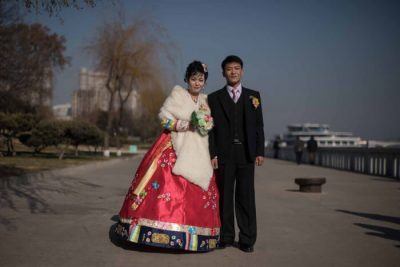 North Korean men expect their brides to be chaste and to have been in no previous marriages. They must also be without child.

In the DPRK, if a woman gets divorced then it is always her fault and as such, she had very little chance of ever finding another husband.

Due to recent harsh economic conditions, however, there has been a loosening of the grip on keeping to these standards. 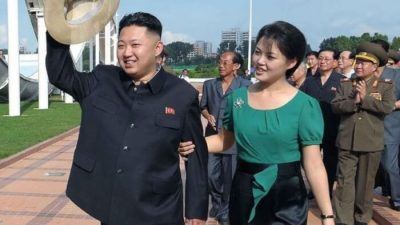 Just like most things in the country, Kim’s wife, Ri Sol-Ju, is about as secretive as anything else. She is very rarely seen out in public…sometimes disappearing for years at a time.

Very little is known about her and it is suspected that even her name is a pseudonym. It is not really known when and if they actually got marries.

13. Keep It In Your Cammo Trousers

North Korean military law states that officers must be celibate during their first 10 years of service. This explains why male soldiers will regularly exchange food for sex with desperate women.

There is also a high level of “situational homosexuality” among them.

14. It Has High Inflation

As of August 2010, the inflation rate in North Korea reached an all time high of 4376.00 percent. Similarly, the currency, known as the Won, has fluctuated even more than the electricity in the country, at a point exchanging W5000 to the US dollar. 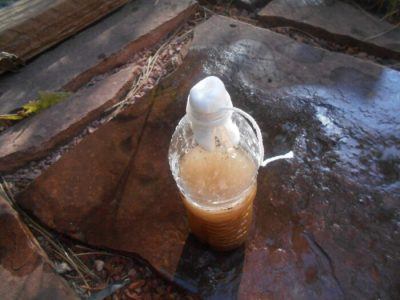 Opium is legal and cheap in North Korea. It comes in handy as a shield against the rampant spreading of STDs.

Women will soak a cotton ball in a light mixture of water and opium which they will insert and carry like a tampon until the next day.

16. Thinking About Getting That Celebrity Hairdo?

Well don’t, because in North Korea you have to choose from a list of ‘officially sanctioned hairstyles.’

Well don’t, because in North Korea you have to choose from a list of ‘officially sanctioned hairstyles.’

They have a list of 28 styles to choose from in total; which are 10 for men and 18 for women. Both are meant to make them look similar to their leaders. Men are required to keep their hair no longer than 2 centimetres while women are to keep theirs at a bob length.

17. Like Weed? Don’t Head for Amsterdam, Get To Korea! 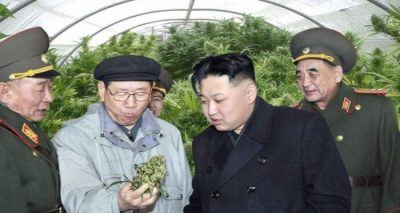 Forget the Netherlands! North Korea is fast gaining a reputation as the cannabis capital of the world. For Chinese and Russian tourists, North Korea is the number one destination to bag yourself some cheap weed.

18. You Must Display Public Grief For The Death of A Leader 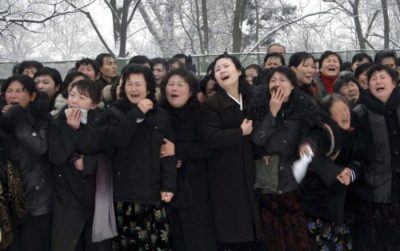 The leadership of North Korea imposed a sentence of at least six months in a labour camp for those who did not go to organised mourning events at the death of Kim Jong-il, or didn’t show enough public grief at his death.

Time to get those onions out we think!

19. Construction Workers Are Fed Crystal Meth To Speed Up Work 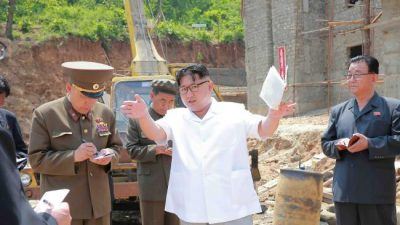 For workers who are labouring on important state projects, they are often given meth based drugs which, when inhaled, increase energy levels and suppress appetite.

This allows the workers to work longer hours with little or no food or rest. Project managers will adopt this strategy in response to immense pressure to complete important state projects under record time as a means of propaganda. 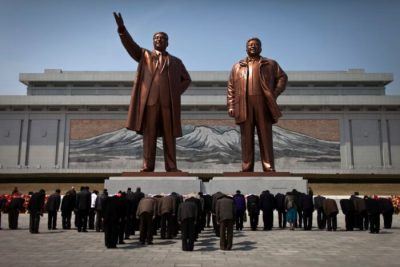 There is no official state religion in North Korea and most people are atheists.

The cult of the Kims uses the Juche philosophy to run the country. It is governed based on the rules of its dead leaders. The country’s calendar actually revolves around their leader’s birth date.

21. You Have To Donate Your Poo 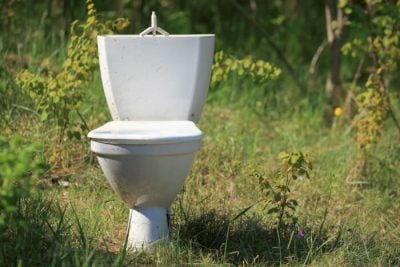 Because of sanctions that stopped the flow of fertilisers from Seoul, North Koreans now have to meet their assigned quota or poop to be used as fertiliser on large state owned farms.

Anyone who is constipated must have to think of ways around the quota, such as buying from shops, stealing from neighbours or scooting for animal poo, which is valued like gold!
22. Want To Buy Some Blue Jeans or Cola? Think Again! 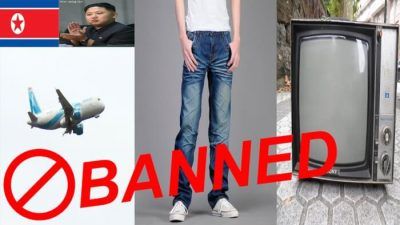 These two items are banned in North Korea. They are considered to be symbols of American capitalism.

They would only ever see them on contraband movies which they already risk their lives to watch.
23. Hotels Can Feel Like Prisons
Any tourists who have risked visiting the secretive state have likened the hotel experience to a jail term. 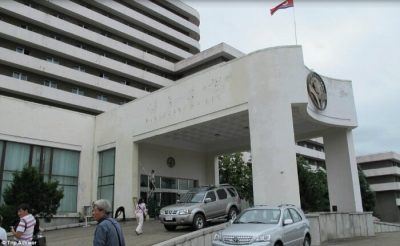 Reviews on rating sites show comment that the hotel floors are more comfortable than the beds, while the plumbing work gives you a flooding that even the rains would envy. 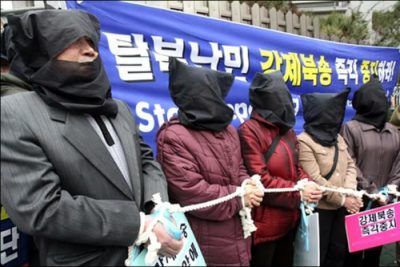 Things that are considered a fundamental human right in other countries can carry the death penalty in North Korea. These include criticizing the leadership, defection, and consumption of unapproved media.

People found guilty of breaking these rules are usually executed in public glare, mostly by decapitation like Eddard Stark.
25. Luxury Goods Can Be Bought By The Rich
Things such as jewellery, modern entertainment gadgets, exotic drinks and perfumes cannot be sold to the country due to international sanctions. However,  the North Korean government actually makes a lot of money from their smuggling. 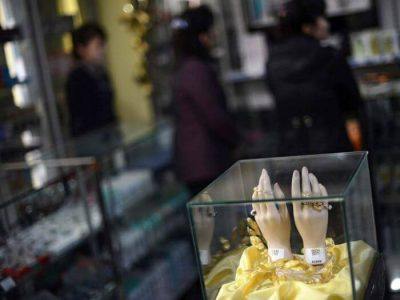 Proceeds from these goods are an important source of funding for Kim’s nuclear weapons programme.

So there you have it, the secretive state has just become a little less secretive! We definitely won’t be booking a trip anytime soon.
×