24 Things You May Not Have Realised About Police Academy

Police Academy is a series of seven comedy films, the first six of which were all released in the 80s, starting in 1984. Whilst some of the films were less than impressive (and that’s putting it politely), the particular brand of slapstick humour they contained meant that many of us loved watching them when we were growing up. It’s fair to say the series did get weaker the longer it went on, but Assignment Miami Beach (Police Academy 5) and City Under Siege (Police Academy 6) still have their outstanding and very funny moments.

But how well do you know the Police Academy series? You’re about to find out by reading the following 24 Things You May Not Have Realised About Police Academy… 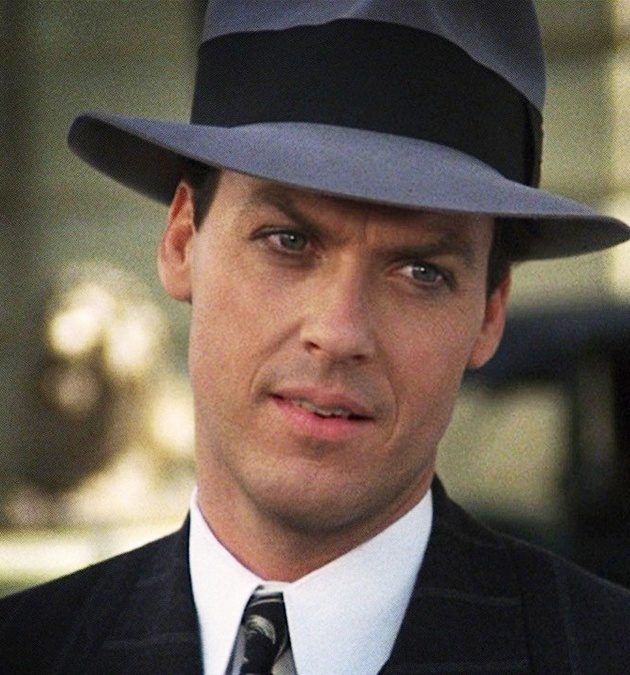 Producers wanted Michael Keaton to star in the original film, but by the time the script was finally complete he was no longer available. How do you think the series would have grown with Keaton’s very natural and almost psychotic style of acting?

2. Mahoney Could Have Been Played By A Big Name Actor 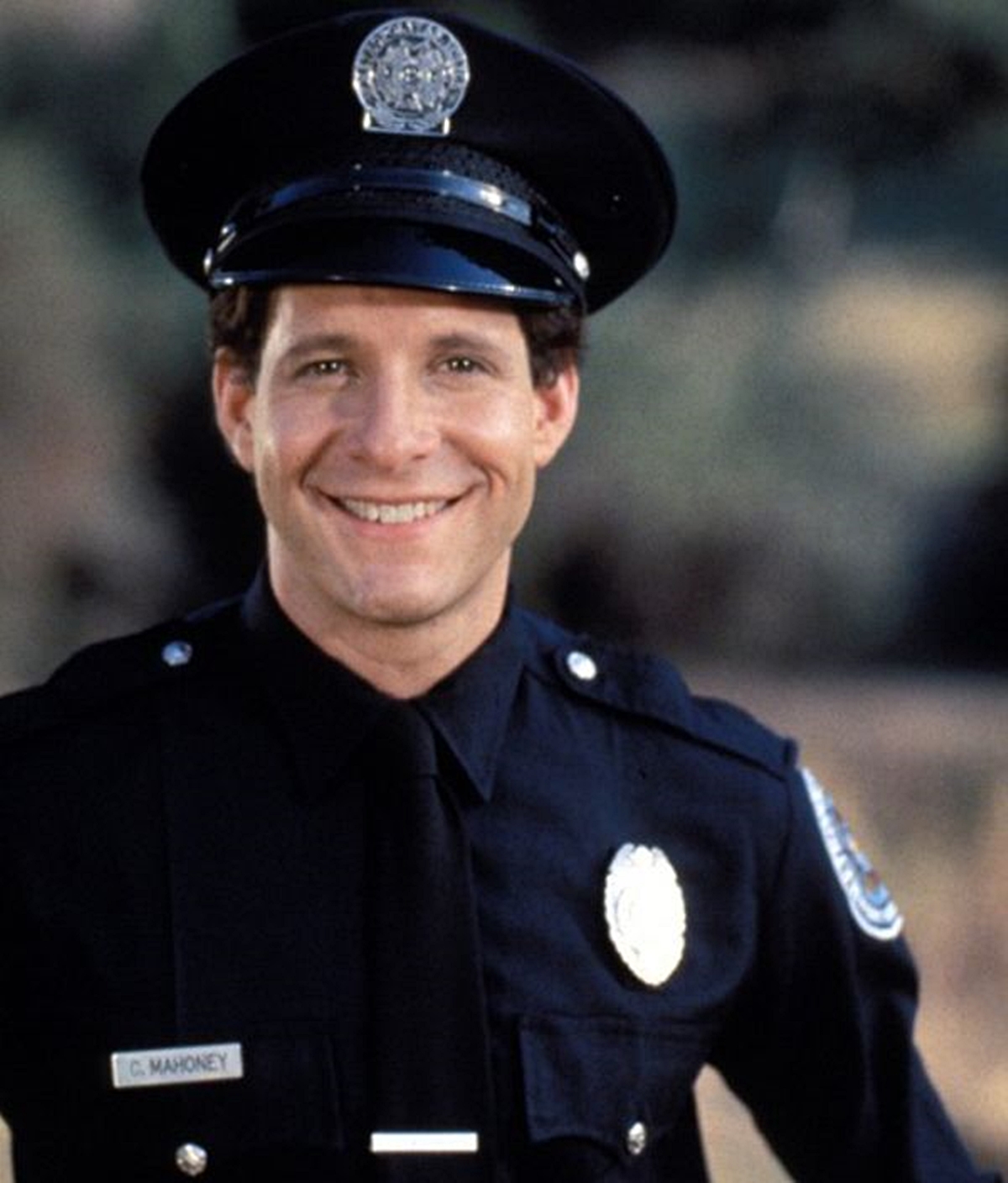 Producers suggested Tom Hanks for the role of Mahoney, a role for which Bruce Willis also auditioned. Other actors also considered to play Mahoney included such names as Billy Crystal, Bill Murray and Robin Williams! Do you think the producers did right with Steve Guttenberg, or would someone else have played it even better? 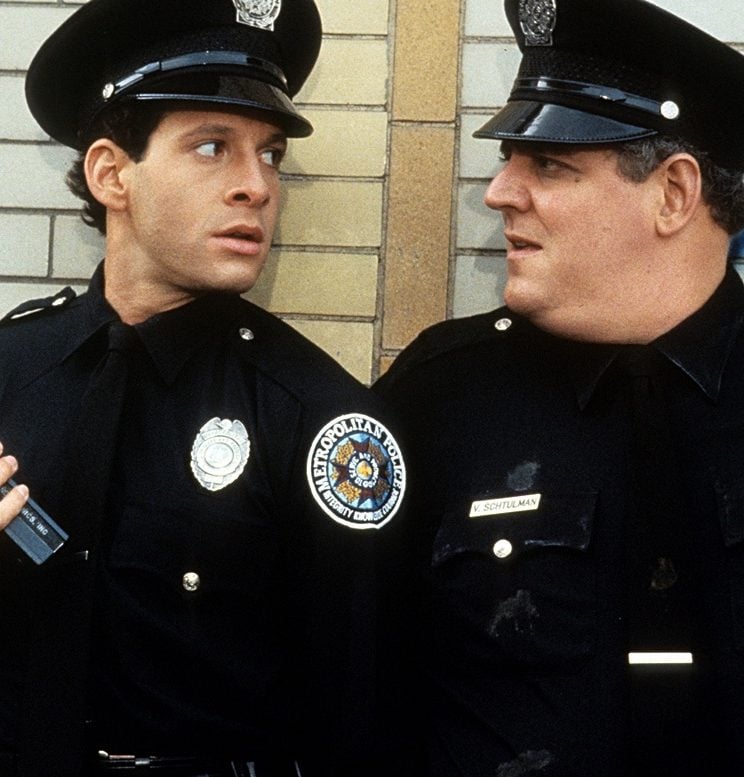 Guttenberg’s father was a real New York cop, but his mum couldn’t handle the stress and worry of him having that job so persuaded him to quit, after which he worked at an electronics shop. Ironic, then that he became most famous for playing a cop in the Police Academy series!

4. Bill Clinton Is A Big Fan 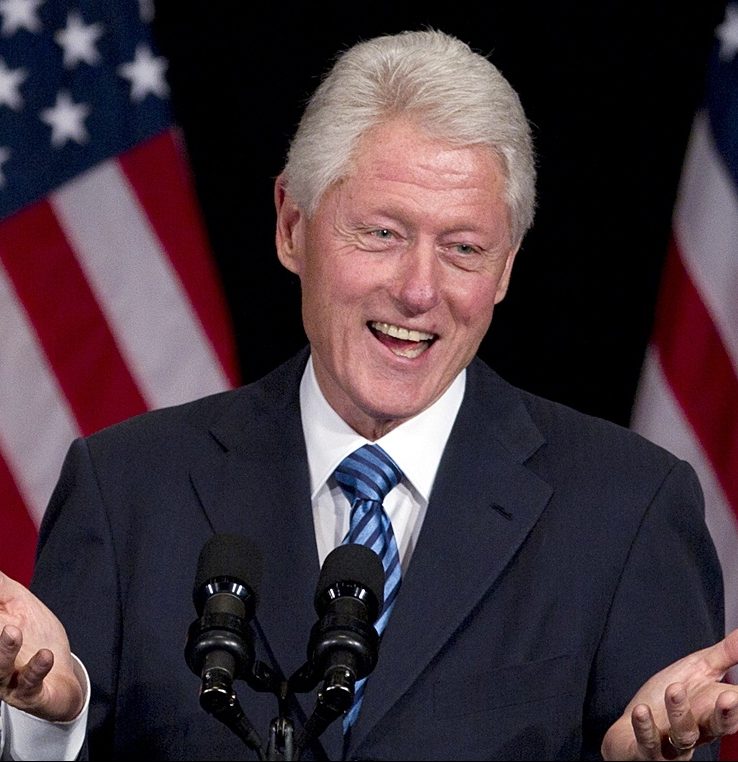 Steve Guttenberg has been quoted as saying that “every time I’ve seen President Clinton he says when he’s in a bad mood he turns on Police Academy.” He hasn’s specified which of the series he means however, but we doubt very much it was the awful Misson To Moscow (Police Academy 7)!

5. Hooks’ Voice Was Inspired By The King Of Pop 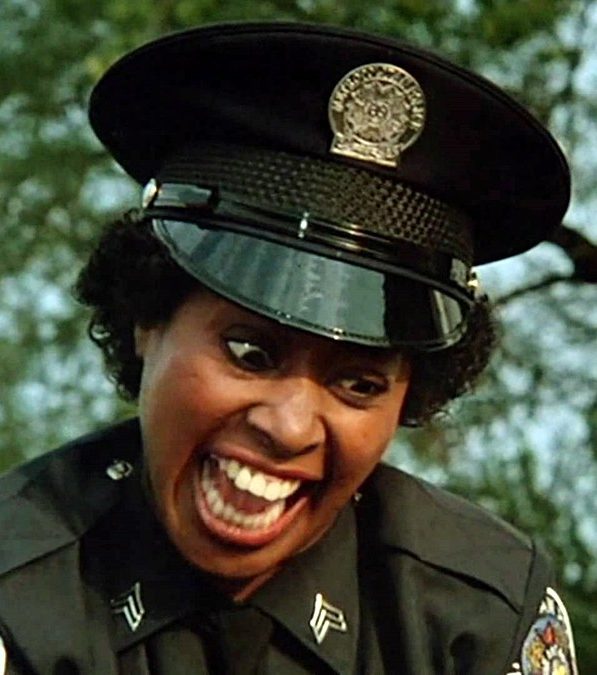 Actress Marion Ramsey developed Hooks’ unique voice after meeting Michael Jackson. We don’t know if that also goes for the times when she is being ignored and suddenly becomes a formidable force with a voice that is not to be reckoned with! (Can you imagine Michael Jackson ever having an outburst like that?)

6. Bill Paxton Could Have Starred In The Second And Third Films 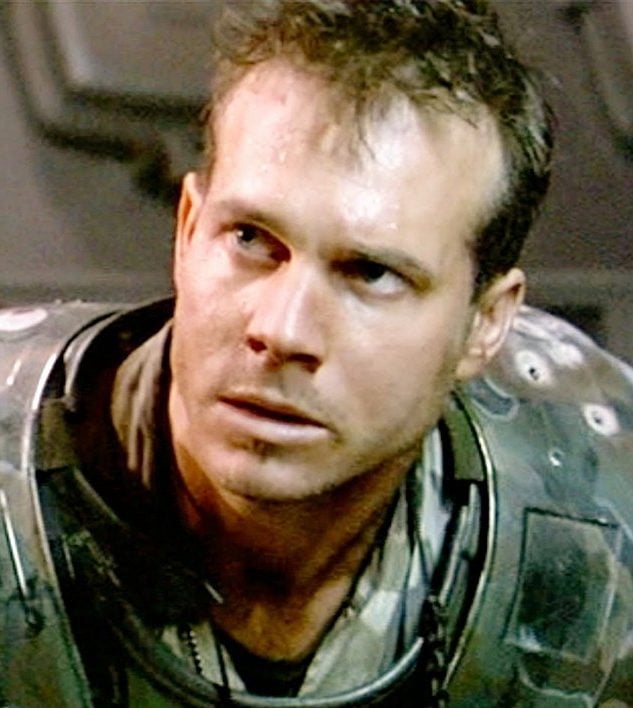 Rather than star in Police Academy 2 and 3, Paxton instead decided to take James Cameron up on his offer of starring in Aliens, despite it paying half as much. Do you think, like me, that this was a great decision? His portrayal of Hudson has become iconic since, and is oft quoted, “Game over, Man! Game over!” 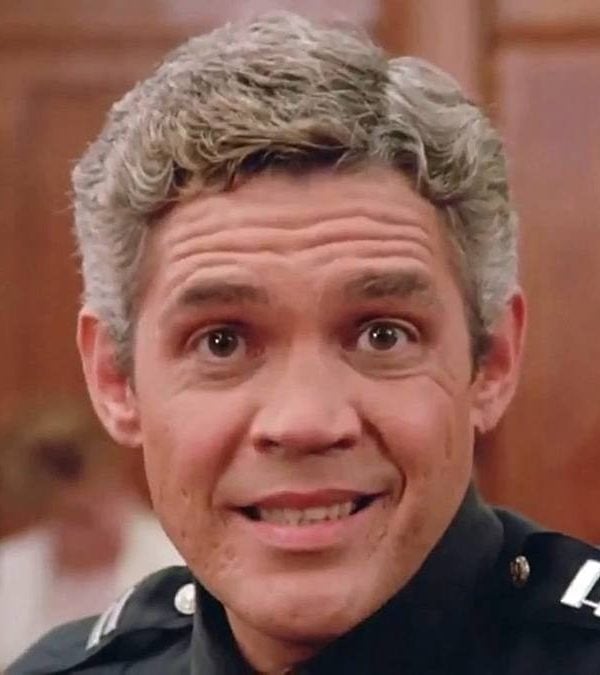 G.W. Bailey, who starred as Captain Harris, claimed he was so drunk whilst shooting ‘Police Academy 4: Citizens on Patrol’ that he doesn’t remember it at all. “I don’t have any idea what it was about,” he was once quoted as saying. You can’t really tell though, to be fair, as his character is often totally exuberant and over the top so being drunk probably helped! 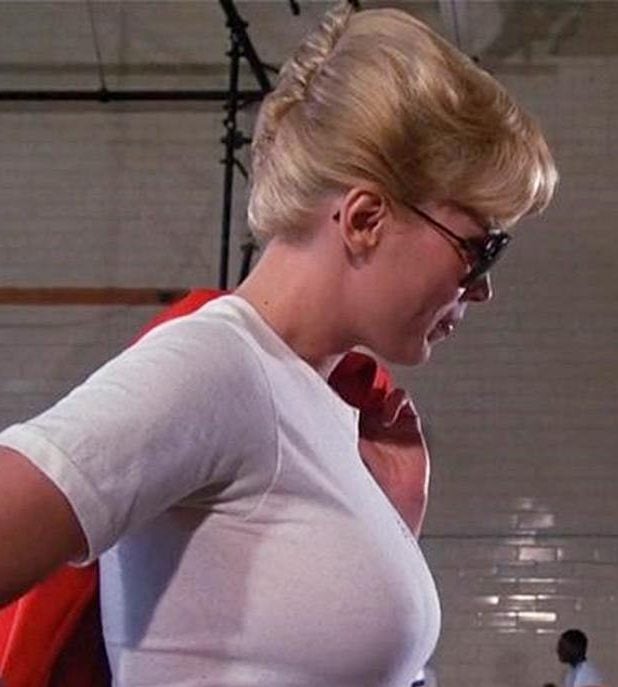 Actor Leslie Easterbrook didn’t need to pretend to love guns, as she was a real life NRA member and a sports shooter that had even released her own shooting video. Looking at the picture below, other people loved her guns too!

9. The Megaphone Gag Came From A Real Life Prank 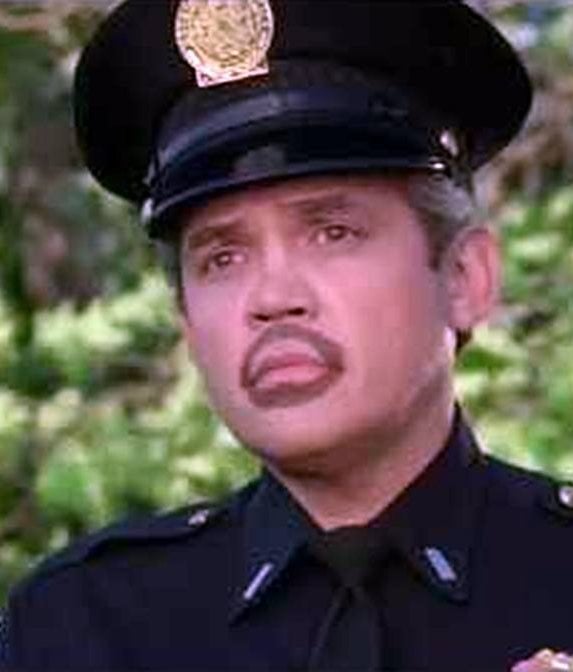 The megaphone shoe polish gag was inspired by a prank played on British director Michael Winner. Harris was subjected to many pranks during the series’ run, who knows how many others were based on fact too!?

10. Skateboarder Tony Hawk Was Sacked From The Fourth Film 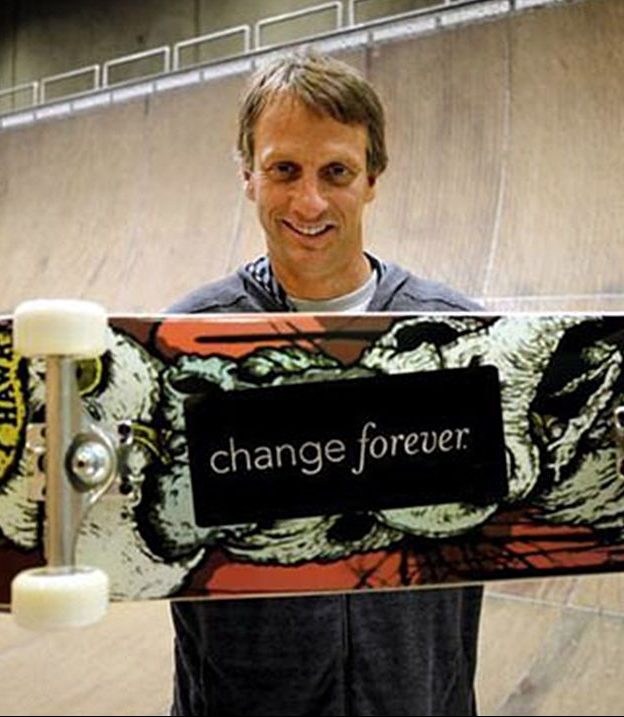 Tony Hawk was the skateboarding stunt double for David Spade, but was sacked because he was too tall and was unable to hide his face. Hawk has since said that it was “a badge of honor to be fired from such a cheesy comedy.” It’s fair to say it hasn’t done his career any harm regardless as Hawk has gone on to have a long string of exremely successful video games made around him.

11. The First Film Was A Massive Hit… 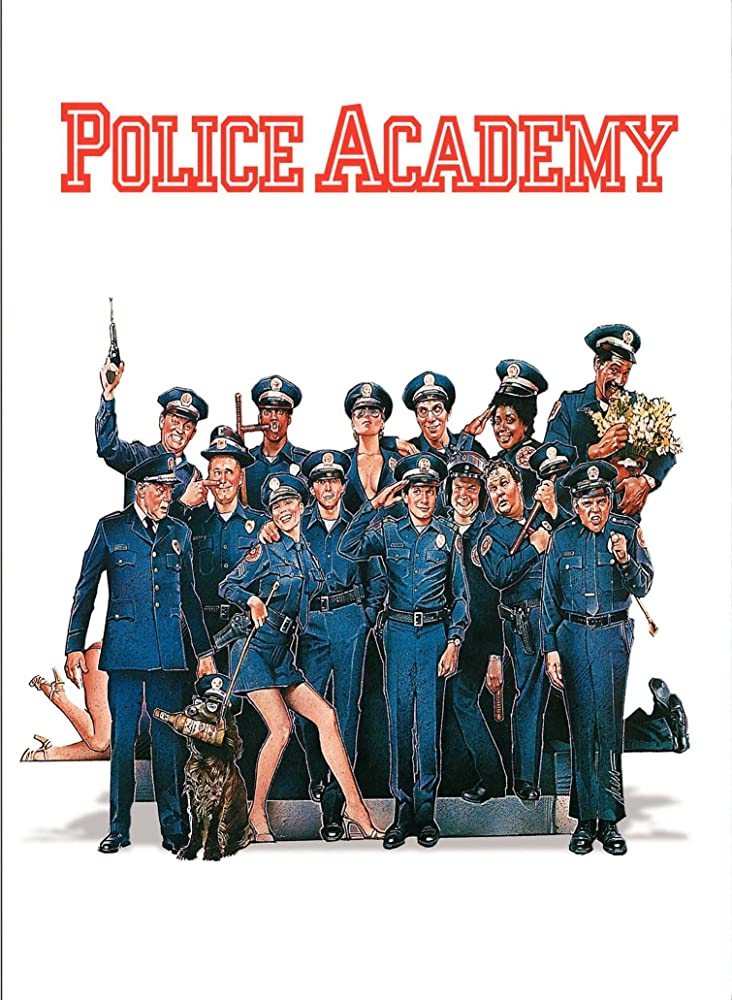 The first film was made in just 45 days for $4.5 million, and it made back $81 million, making it the sixth highest-grossing film of 1984. That is a massive profit from how much the film cost to make and one of the big reasons that the film got a sequel relatively quickly – there’s nothing like a good cash-spinner!

12. …But The Seventh Film Was A Massive Flop 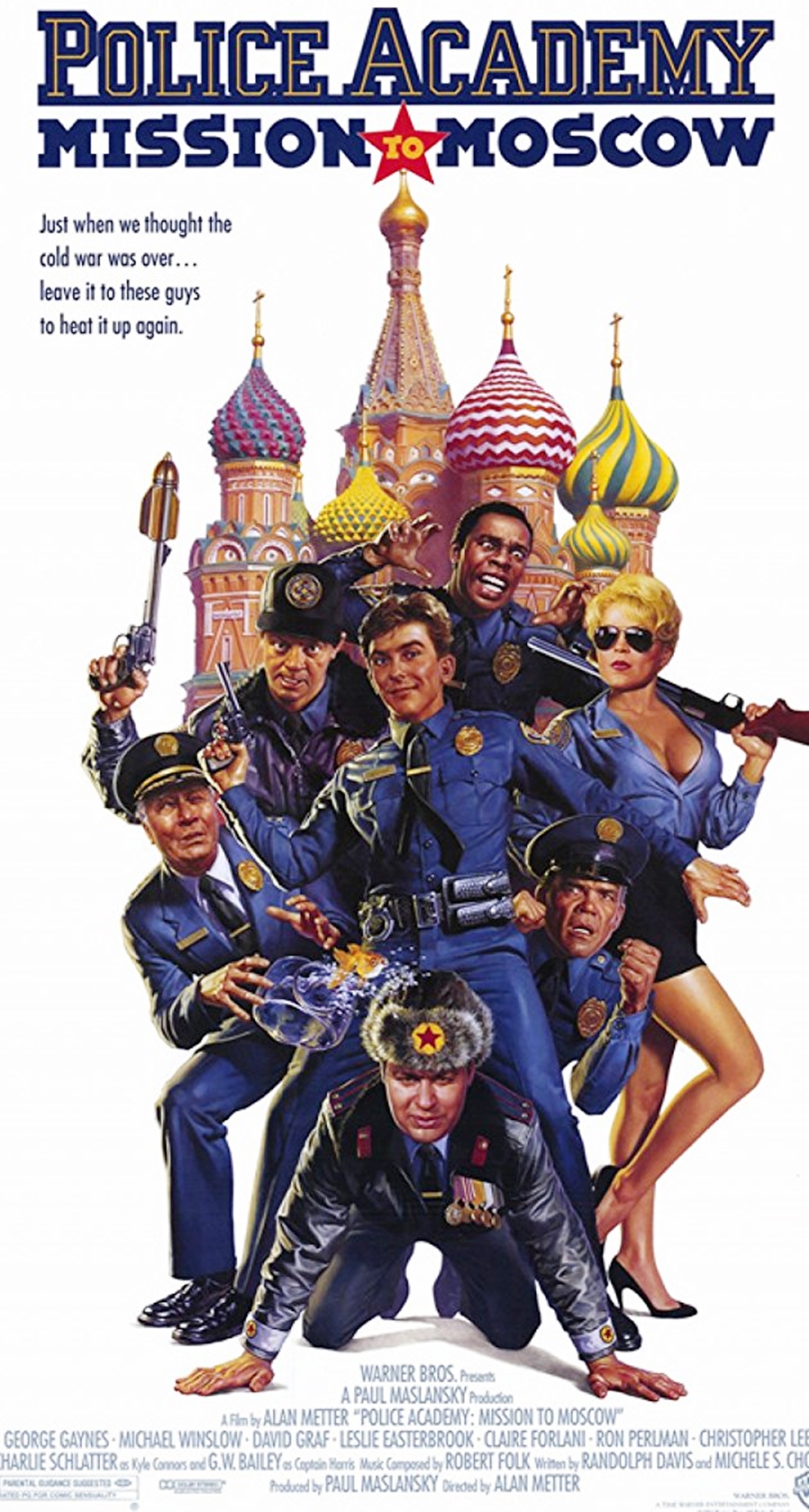 ‘Police Academy: Mission to Moscow’, released in 1994, was the lowest grossing film in the series by a long way. It is also widely acclaimed as the worst the series has to offer, with very few gags that actually manage to produce an actual laugh. Are you the one person who loves this film more than the rest in the series?

13. Michael Winslow Is The Only Actor To Appear In All Seven Films 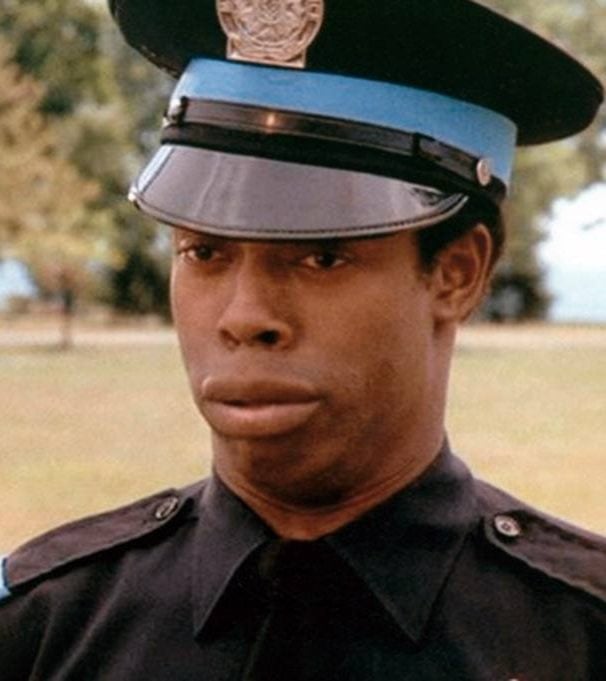 Whilst 3 actors have appeared in all 7 films, Winslow is the only actor that starred in every film as well as the live action ‘Police Academy: The Series’. Winslow plays Jones who has the ability to recreate a lot of sounds with his mouth and is extremely talented at doing so!

14. You may recognise some of Jones’ noises in the first film 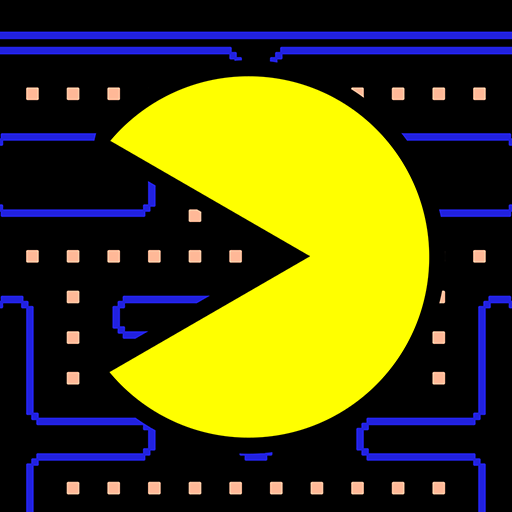 In the first Police Academy when Jones is knocked out of a window and down some stairs, he does his usual and produces some interesting sounds. You may be forgiven for thinking you recognise the sounds as he copies sounds from the Pac-Man video game which was a massive hit at the time!

15. An Eighth Film Could Be On The Way 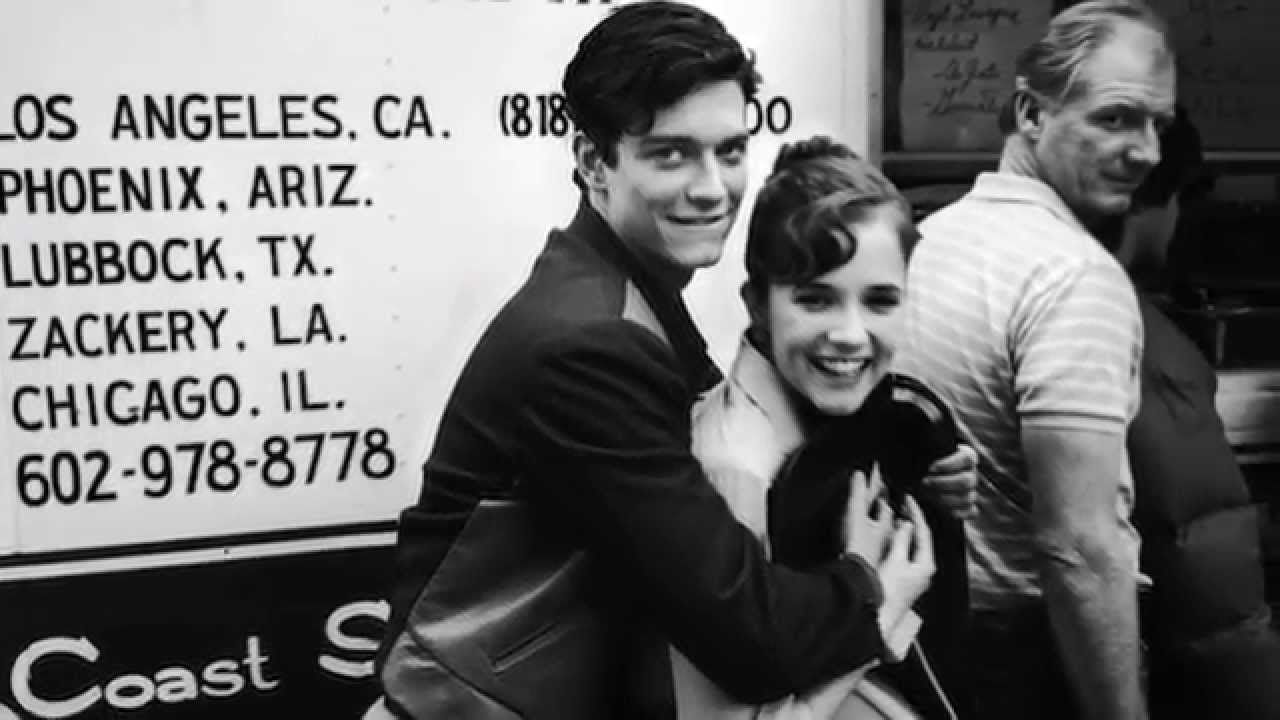 A new Police Academy film is currently in the works, with the title rumoured to be ‘Police Academy: Next Generation’. We can only hope that they try and take the series back to its roots and don’t try and do anything too different to what made the series so successful to start with and certainly don’t try and follow the awful Mission to Moscow!

16. The Bank That’s Robbed In Police Academy 6 Has Been Burgled In Other Films 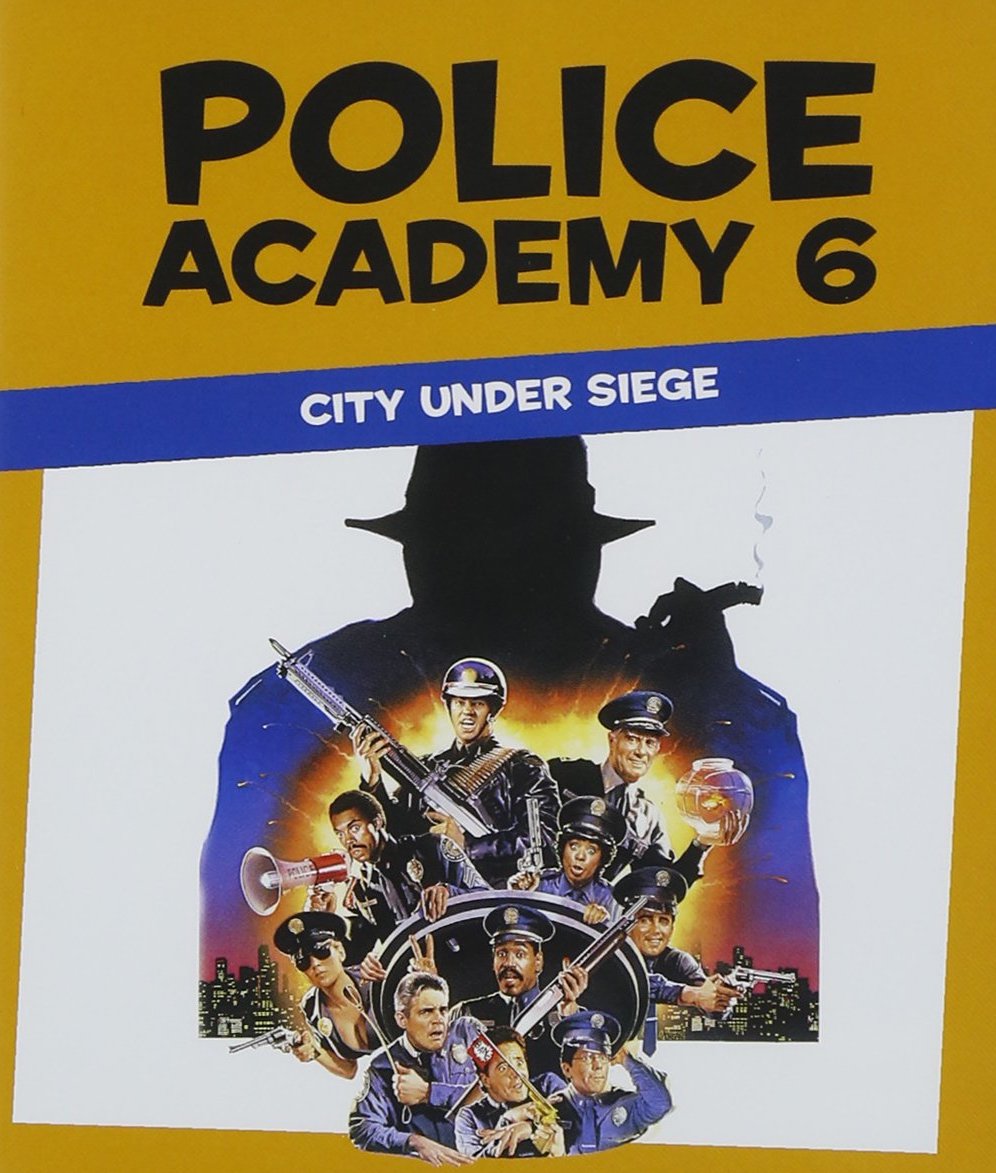 In Police Academy 6: City Under Siege, the Wilson Heights Gang rob a bank. The same bank is used again in Spider-Man 2 when Spider-Man has his big fight with Dr. Octopus!

17. We don’t find out Callahan’s name until the 6th film! 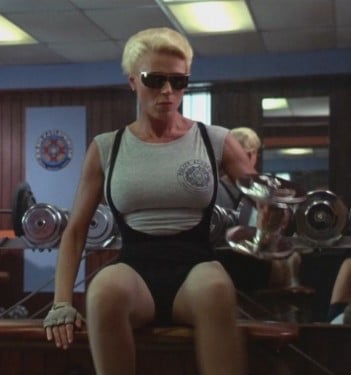 Throughout the previous entries in the series, Callahan is simply known as “Callahan”. It’s not until the 6th film that we find out the character’s first name of “Debbie”! 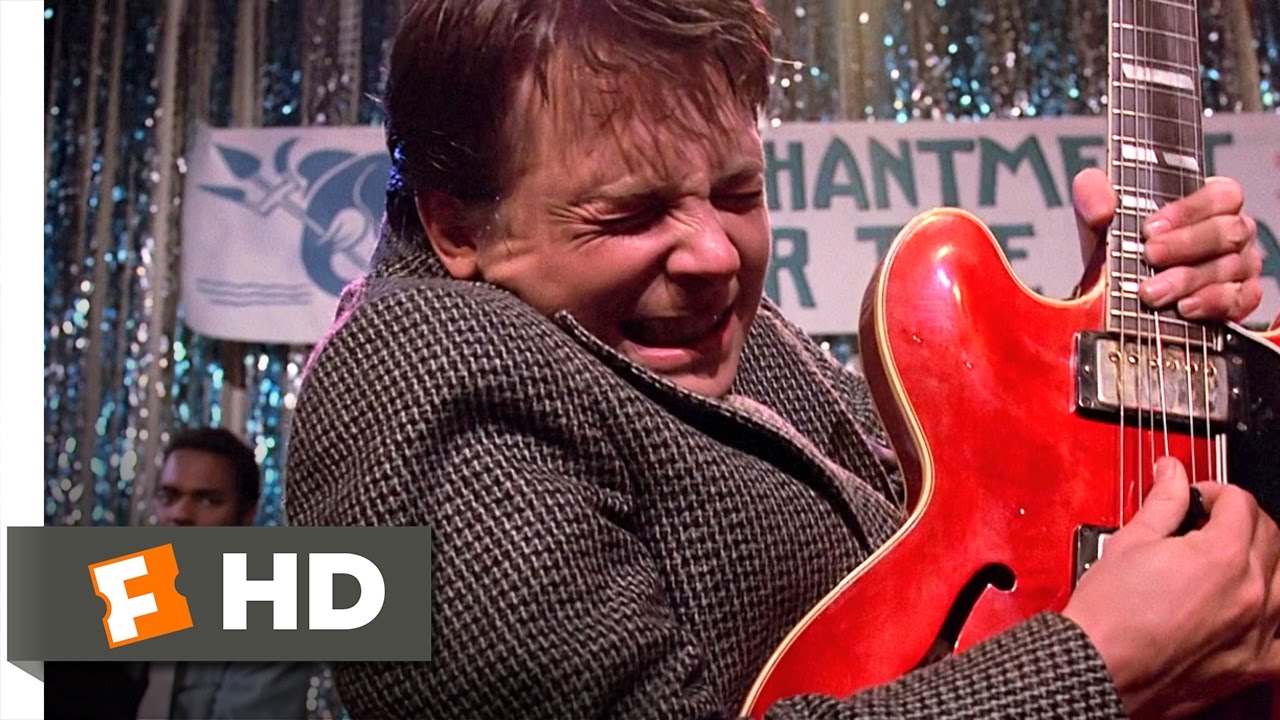 In Police Academy 5: Assignment Miami Beach, Bobcat Goldthwait was meant to reprise his role of Zed, but couldn’t come to a financial agreement with the studio. The execs felt that without Zed there was no point reprising the role of Sweetchuck either, and so Tim Kazurinsky lost out in appearing in the film, too!

19. Iron Man nearly made an appearance… Kind of! 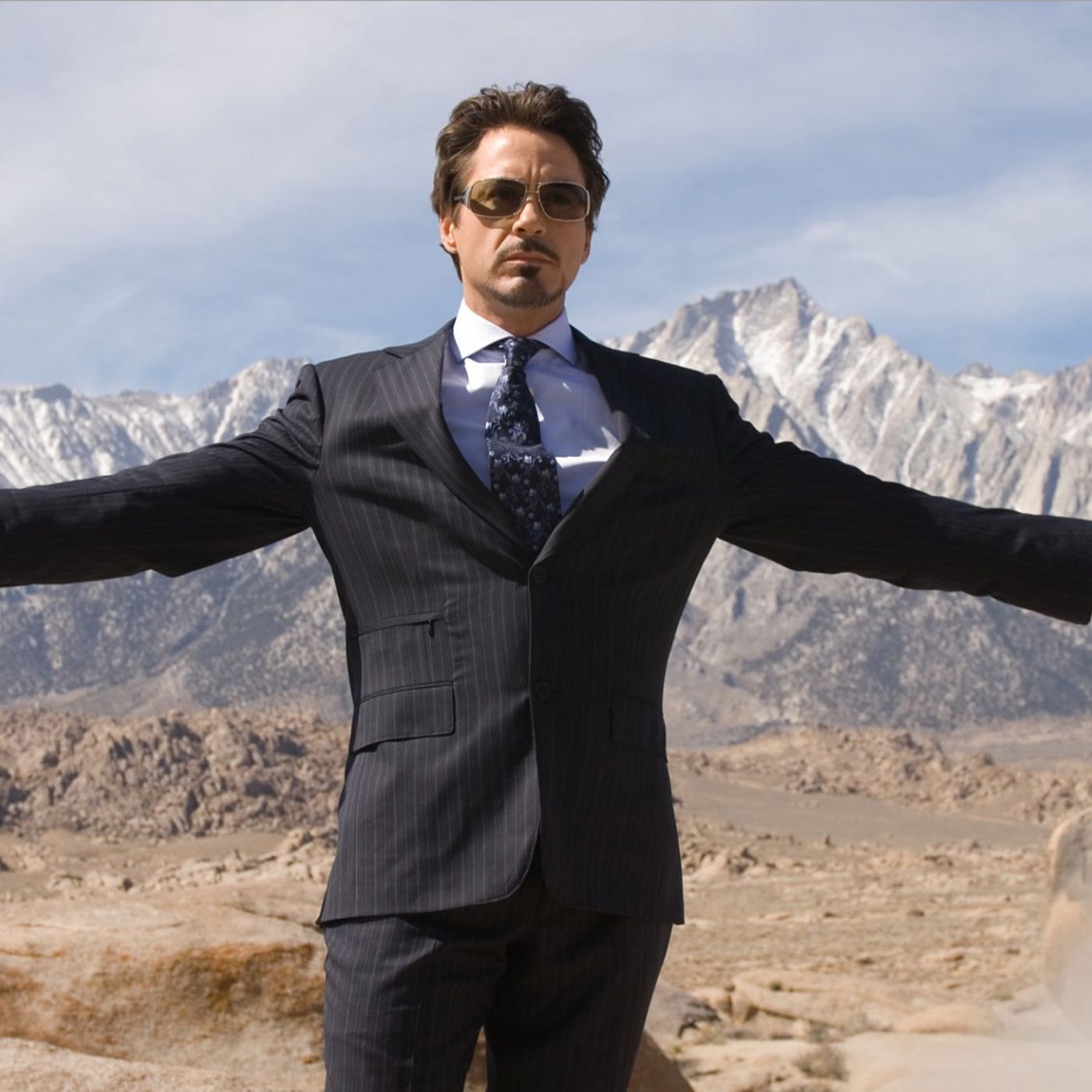 In Police Academy 5, the character of “Tony” was originally given the name of “Tony Stark”, it was only when the studio found out that Marvel also had a character of this name to which they owned the rights that they wrote out the surname and stuck to simply calling the character “Tony”.

20. Sharon Stone may not have appeared had her first marriage not broken down 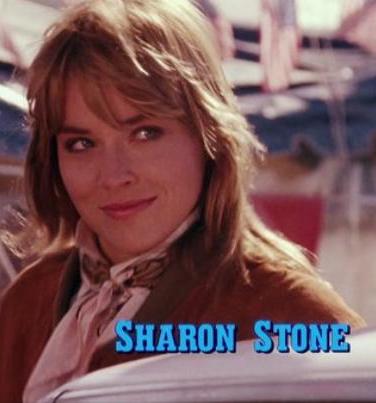 Sharon Stone appears in Police Academy 4: Citizens on Patrol. She took the part after her first marriage failed and she wanted a lighter period in her life, stating, “Hanging out with a group of comedians, it’s the best therapy!”

21. Steve Guttenberg and Sharon Stone had a bumpy ride! 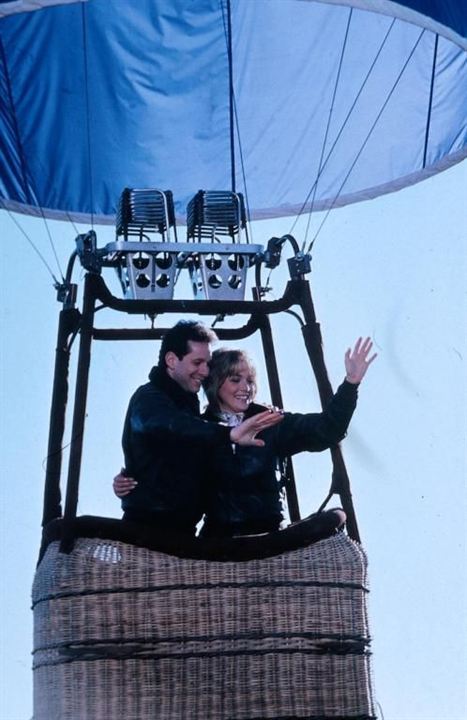 During the hot air balloon scenes in Police Academy 4, the balloon that Steve Guttenberg and Sharon Stone were in encountered a very bumpy landing leaving the pair “roughed up”!

22. There are 2 versions of the famous T-Shirt Scene! 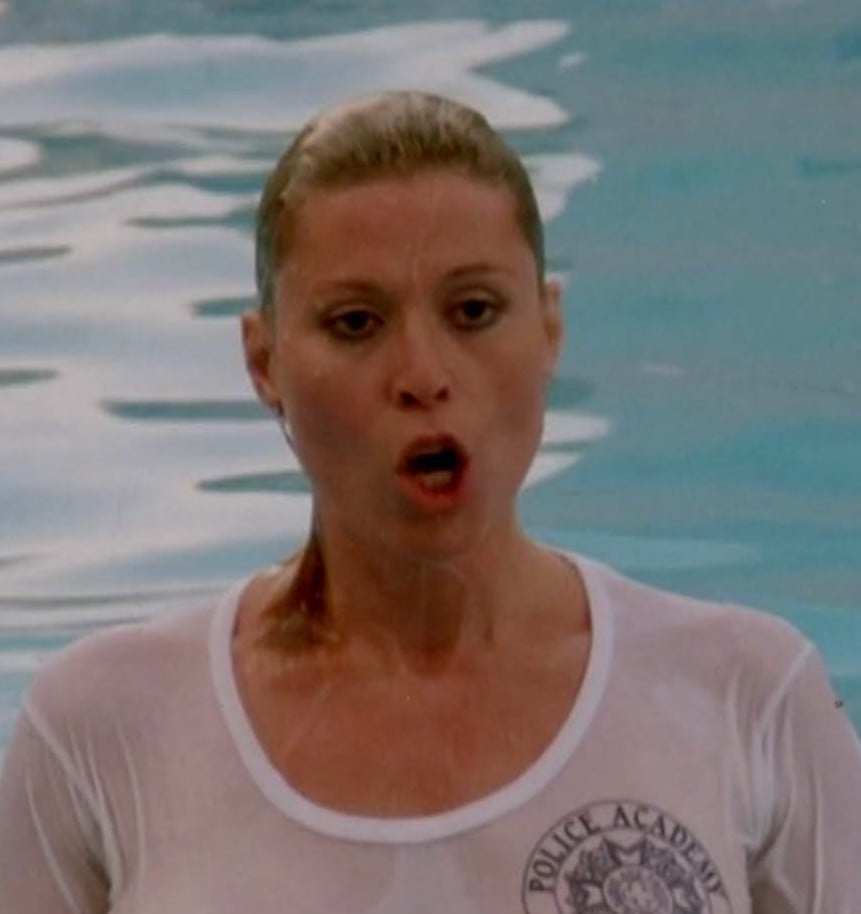 Leslie Easterbrook filmed 2 versions of the now famous and series-defining T-Shirt moment in Police Academy 4. In one version of the scene, she wore a T-Shirt that became see-through when wet, in the other it didn’t become see-through and was used for the movie’s trailer. Which version did you prefer??

23. Leslie Easterbrook was not a natural jet-ski rider 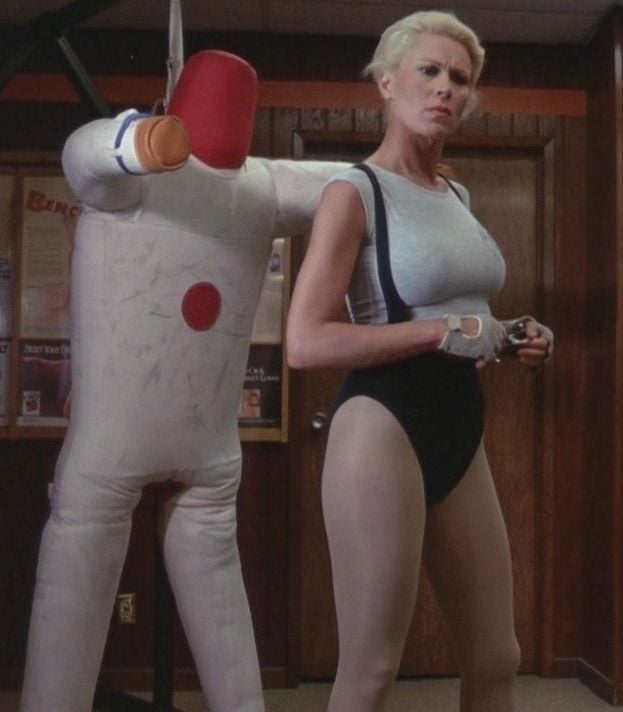 It was evident that Leslie Easterbrook was not a natural when it came to riding jet-skis when it took the actress four hours just to learn how to start the machine! She still makes it look very natural when riding it in Police Academy 3: Back in Training, though right??

24. Bubba Smith was given no warning about his “drag” scene 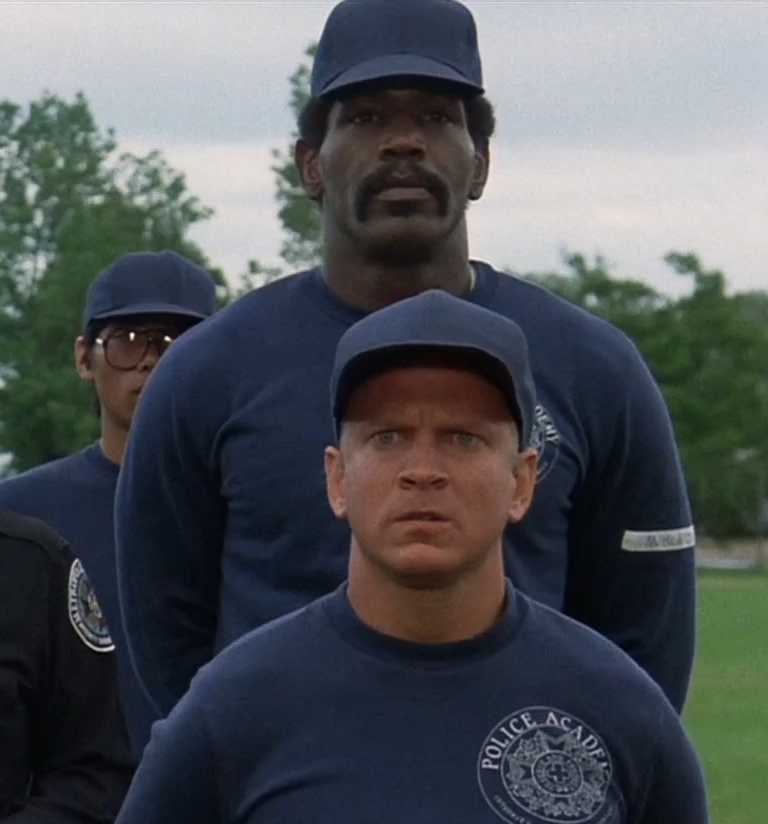 When Bubba Smith has to wear a dress and wig in the purse-snatching scene in Police Academy 3, he was given no prior notice that he would have to dress like this before showing up on location and was even asked to shave his moustache! He declined to shave the ‘tash so they had to film his scenes largely from behind as a result!