Children’s toys are designed to be just that right…for children. They are innocent and innocuous, often fluffy and cuddly.

Having toys is part of life, and no matter how old we are, we still like playing with ‘toys,’ even if these toys get much more bigger and expensive as we grow up.

Toys can play a big factor in development during childhood.

It can influence education and improve abilities and skills that kids need to prepare them for later life. 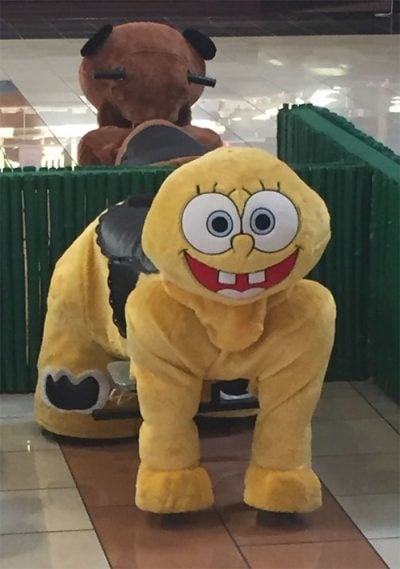 For motor skills, toys can help children to take part in physical activity by developing their fine and gross motor skills.

Activities such as colouring in and fancy dress allow kids to use their sense of touch and sight.

Walkers, bikes etc boost their physiognomy  and will strengthen their arms and legs.

These types of toy can also assist children in discovering balance and coordination.

Toys also help boost a child’s creativity and helps them to show their emotions.

This could be through both role playing and acting, or playing with action figures. 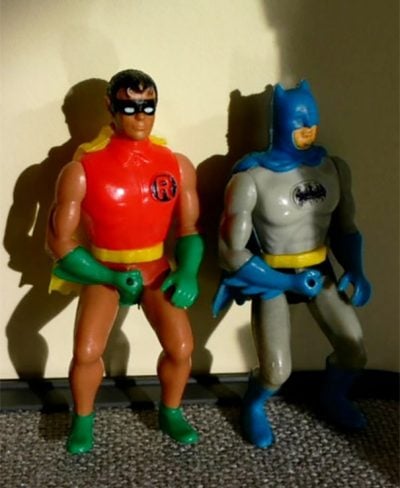 Children are able to put action figures in an ordinary environment like a dolls house, or they can invent a fantastical world like underwater paradises.

Toys are able to give an understanding of the society and world in which they live.

Sometimes, however, things can happen during the design and the production of these toys which make them…a little less child friendly.

These are often due to misplaced parts, poor pictures placements or misspellings.

Here we take a look at 23 toy design fails that are guaranteed to make you chuckle. 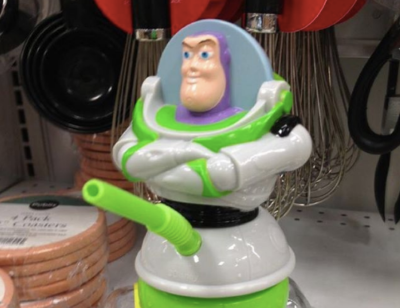 My, what a massive straw you have Buzz.

We’re not quite sure that this rocket will get you back into space.

Imagine staring into those alien eyes as you’re sucking on your drink.

It would be enough to put anyone off.

Yes, the designers of this cup really didn’t think about placement.

I’m Andy would get a right shock if he saw this. 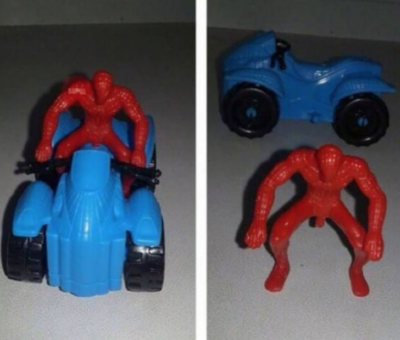 …but can a spider rice a quad bike?

And, oh my! What is that between your legs Spidey?

Our spider senses are tingling if it is what we think it is.

Obviously a bit of spidy-web has just got itself loose and caught down there.

Either that or there was a spare bit of plastic left over in the factory. 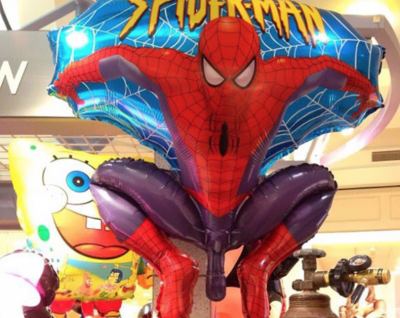 This is another case of things being in the wrong place.

We are aware that helium balloons have this strange part where it connects to the string.

Unfortunately, in this instance, the balloon is shaped like Spiderman.

And it so happens that where the string and Spidy meet, well…

It’s at his crotch.

This isn’t the best placing for this bit of the balloon. 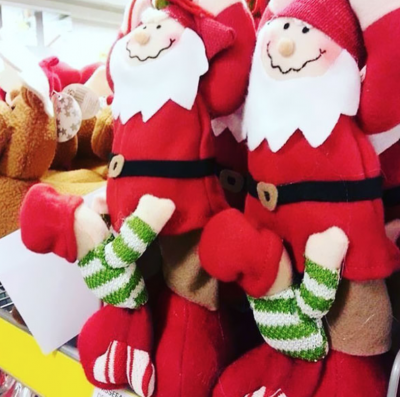 After this picture was posted online, we’re sure that Santa found himself on the naughty list.

Those elves are rather unfortunately placed on this product.

To be honest, we’re not really quite sure what the product is meant to be.

Is it some sort of stocking that you hang on the fireplace?

Even Santa’s face doesn’t look like he’s too happy.

They do say that elves get up to mischief. 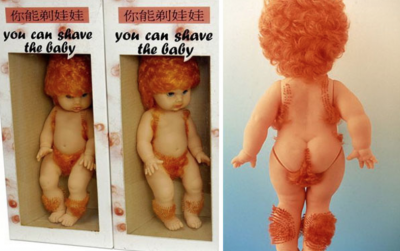 Hang on what? ‘You can shave the baby.’

Why would we WANT to shave the baby?

The point of a baby is they they don’t have hair and don’t need shaving.

Also, this hair seems to be very strangely placed.

Who just has a line running from their shoulders down to their thighs and up their backs?

These patches of hair are just really random.

This is sure to give us nightmares for days.

6. That’s Not How You Save Lives Batman 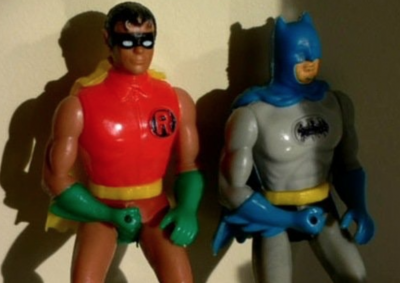 The Batman and Robin action figures have been posed rather suggestively.

We can’t quite figure out why both of their hands have been moulded to be fists.

Both fists forms a hole.

Usually when action figures are like this, it’s so that something can be fitted into the hole.

This ‘something’ is usually a sword or weapon of some sort.

We wonder what sword or weapon Batman and Robin are going to use.

Nothing really comes to mind. 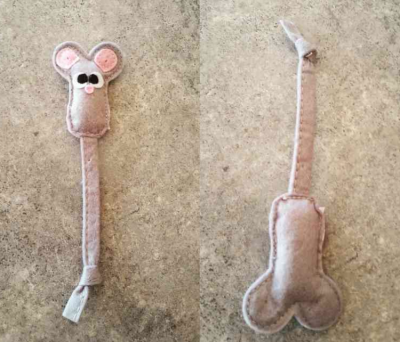 We assume this mouse is some sort of cat toy.

We’re not quite sure why a human would want to play with it.

Or indeed what they would do with it.

But when flipped over, this mouse looks like…something else.

Perhaps the designers just needed to step back and think about their design.

At least the cat will enjoy playing with it. 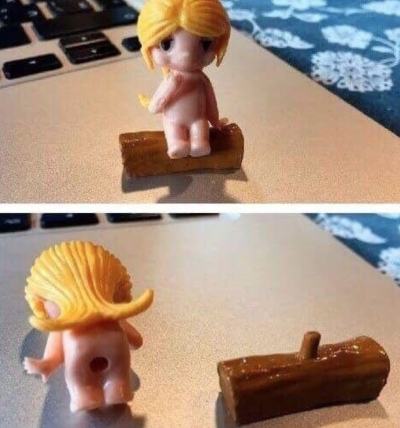 We can understand that it was necessary for practical reasons, but aesthetically…no!

There’s a few questions we have about this one.

Firstly, why is the figurine not wearing any clothes.

Secondly, why is she sitting on the log not wearing any clothes.

She especially shouldn’t be sitting on that bit of a branch sticking out. 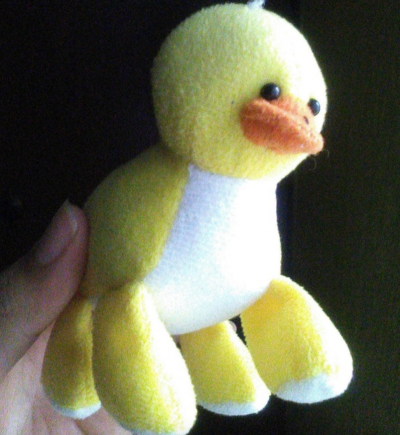 This is meant to be a duck right? Because we’re really not so sure.

Firstly, I’ve never seen a duck with that sort of face before.

Secondly, this toy has four legs.

We’re pretty certain that ducks only have two legs.

Ducks also have wings, which is something this toymaker seems to have not noticed.

Despite this, it’s still quite cute. We would love it. 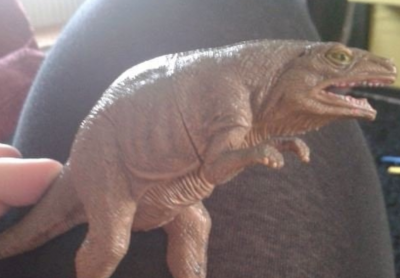 Oh Lord. We can’t remember seeing this in Jurassic Park.

It looks as if this…dinosaur? is trying to sneak around without being heard.

The way his little arms are tucked up into his body.

To avoid detection, this dinosaur has also seemingly gotten rid of his neck. 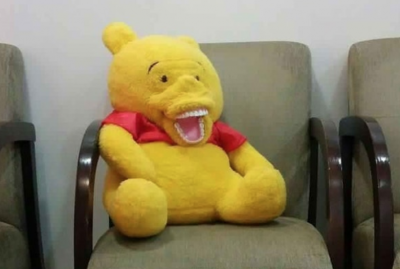 Imagine going to sleep and waking up to this thing.

It is sure to bring nightmares to children all over the country.

Why doesn’t it have a nose? It looks as though Voldemort and Mrs Pooh hooked up to have a child,

And most horrifying of all? Its mouth!

It looks like someone’s just gone and shoved a pair of false teeth in there. 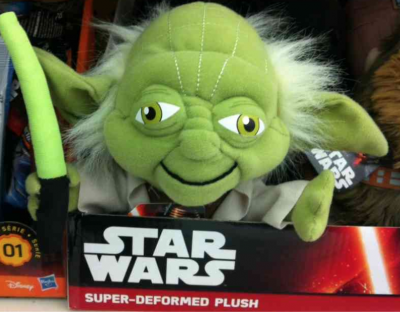 I mean, this is exactly what it is on the tin I suppose.

This Yoda, as it says, is ‘super-deformed.’

We can see how it sort of resembles Yoda.

Does it have green skin? Tick.

Does it have big ears? Tick

Does it have a lightsaber? Tick

Ok, so it must be Yoda then. 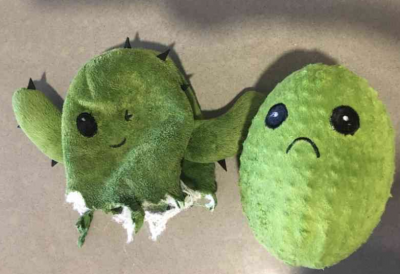 This person was in for a shock when their dog ripped apart a toy cactus.

It was a shock because in the cactus they found…a baby cactus?

The happy one was on the outside and the sad one is in the inside.

We’re sure that this must be a metaphor for something.

14. Night Lights Are Supposed To Make You Feel Safe… 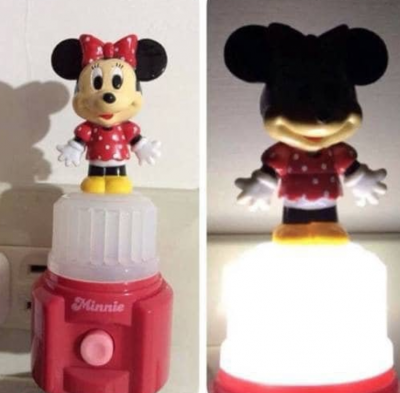 Night lights are supposed to make you feel safe right?

That’s the point of them.

Well this night light might just have the opposite effect.

Mini’s mouth protrudes and therefore the light doesn’t quite reach the rest of her face.

This gives her a very terrifying appearance.

It’s like when you shine a torch under your chin for telling ghost stories. 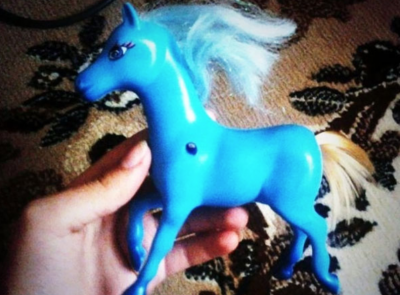 This person got quite the surprise when they opened this toy up.

Why did they get a surprise I here you ask?

Well it turns out the pony’s tail wasn’t a tail at all.

It was actually the hair from another toy.

That’s right, opening up the pony you will find the head of barbie.

We hope the pony didn’t swallow it and now her hair is coming out of the other end. 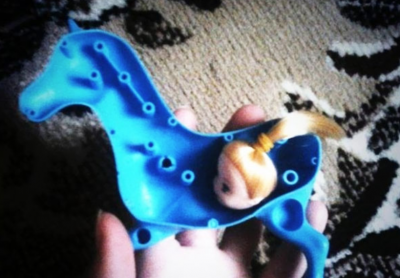 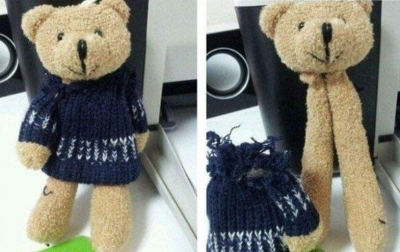 You would assume that even with a jumper on, the teddy would have the rest of its body intact.

NOPE. That’s not the case.

Instead, when you remove this bear’s jumper, you are presented with two long legs.

These legs reach right up to the bear’s neck.

I guess it would save money on stuffing and fabric.

Better put that jumper back on before he gets cold. 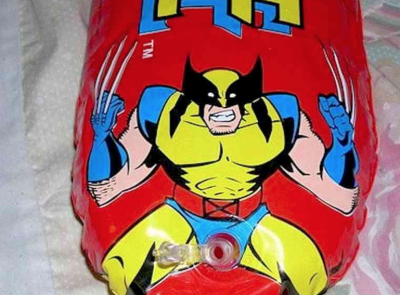 This is obviously some kind of blow-up toy.

In blow up toys, you obviously need a hole in which to blow through.

The only problem is though, this hole has been rather unfortunately placed.

I mean, don’t these products go through tests before they’re mass-produced.

Why did no one see this and think ‘hang on a minute.’ 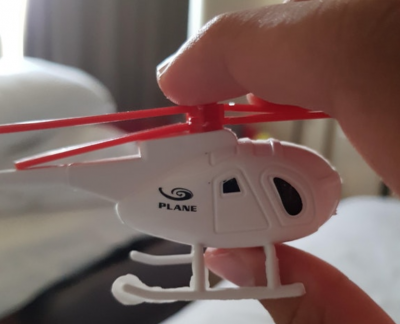 When it’s a plane.

Yeh, you guys got it wrong.

It’s not even like ‘helicopter’ wouldn’t have been able to fit.

There’s plenty of room on there for the word.

Why they did this we’ll never know. 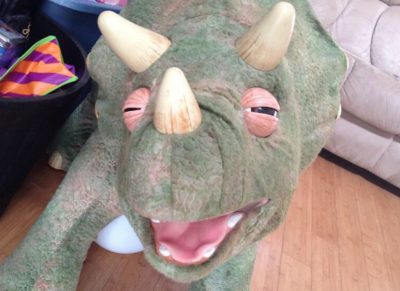 This is a look that a few of us probably recognise.

But it’s a look that we don’t expect to see on a dinosaur.

We’re not quite sure what was going on back in the Jurassic era.

Perhaps this dinosaur was chewing on something it shouldn’t have done. 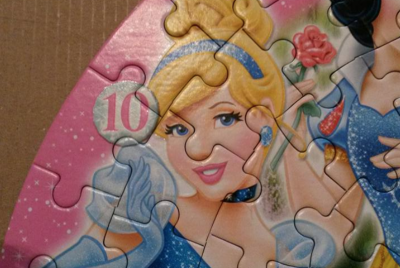 This jigsaw piece is in a rather bad position.

Where two pieces meet also happens to be where Cinderella’s nose it.

This gives her the unfortunate appearance of having a larger nose than she does.

Even with the massive conker, we think you look pretty Cinderella.

Good job you only need to fit the slipper on your foot. 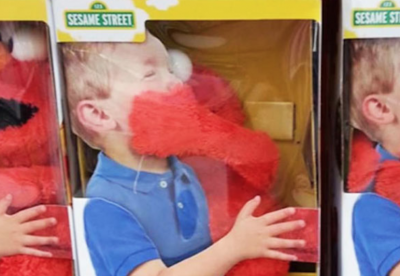 Why are you holding your hand over the mouth of that child like you’re keeping him quiet?

Have you done something that you don’t want him to talk about?

If you don’t move it soon, the poor kid isn’t going to be able to breath.

No wonder your eyes are literally popping out of your head.

Ours would be in the same position. 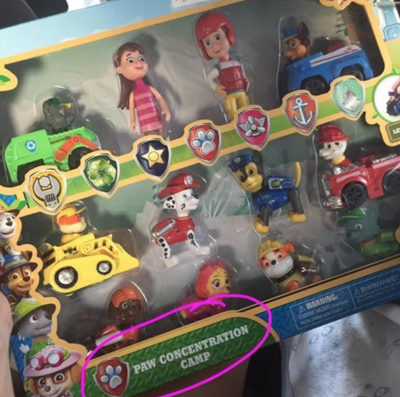 This is a rather unfortunate choice of words

Why oh why would you put dogs in a concentration camp?

You shouldn’t put anything in a concentration camp.

This is in very ‘paw’ taste.

We’re pretty barking mad about it. 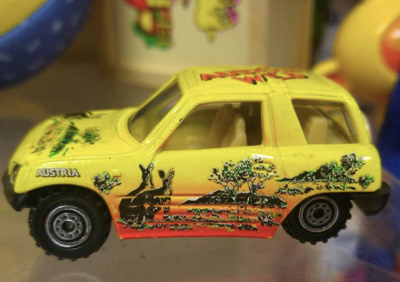 The last time I went to Austria, there was lots of snow and mountains.

We think this should be Australia…definitely Australia.

I’m sure there are kangaroos in Austria somewhere.

But definitely not deserts.

So there you have it, some classically funny toy fails. Which one was your favourite? Let us know.