I have been a fan of this cartoon my whole life and still, I’m surprised by some of these facts! So, let’s see what our favorite character has been hiding from us all these years:

1. The meaning behind his name: 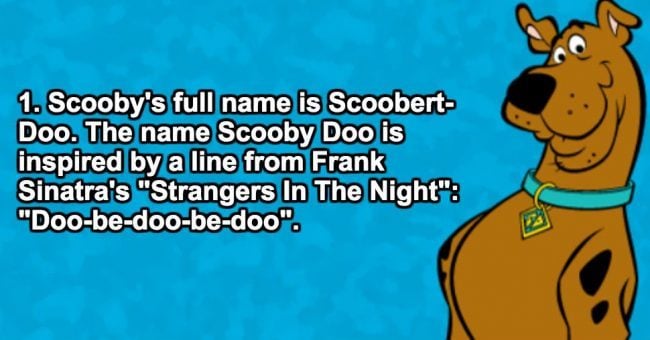 2. The reason Fred and Daphne REALLY split off together.

No, it’s wasn’t to hook up! The writers simply wanted to write for the more interesting characters and so they often sent them off in a less successful direction.

It was originally pitched as a rock band with a dog who plays the bongos.

The voice for Scooby-Doo, Scrappy-Doo and even Papa Smurf is all done by one man named Don Messick.

6. Scooby-Doo is a triplet.

7. The ‘Scooby’ franchise is more than just major motion pictures.

It also includes spinoff novels, video and computer games, board games and a comic book series.

8. The voice for Shaggy, Casey Kasem, wanted Shaggy to be a vegetarian.

Casey even quit the show when Shaggy was in a Burger King commercial.

9. Velma’s line, “My glasses. . . I can’t see without them!” was actually said by the voice actor, Nichole Jaffe at the first reading.

The writers thought that it was cute and so they kept the line.

Frank Welker voiced Fred through every movie and TV show except one in 1988 ‘A Pup named Scooby-Doo’.

12. Rumors about Velma being a lesbian are false.

The writers even tried to pair her with Shaggy to extinguish the rumor.

13. Shaggy-Doo and Scooby-Doo appear in every show.

They are the only characters to do so.

However, CBS thought that it was too frightening for children and later decided to star the dog and rename it to make it less scary.

His excessive use of the letter “R” is called rhotacism.

However, producers thought that he was too similar to Hot Dog from ‘Archie’ comics so they made him a Great Dane.

This was the first Saturday morning cartoon to feature this.

This animated series was the longest running Saturday morning show in the United States.

Instead of following the Great Dane look specifically, he was made to look cuter.

Despite its massive success, it has only been nominated for two major awards. One for a Daytime Emmy in 1990 for ‘A Pup Named Scooby-Doo’ and another in 2003 for the voice of Velma, Mindy Cohn, for outstanding performance in An Animated Program.