20 Things You Didn’t Know About The Disney Princesses

If you grew up watching the Disney classics, then you definitely had a favourite Disney princess. From the release of Snow White in 1937, up to the phenomenal success of Frozen in recent years, princesses have been a huge part of the Disney franchise.

They’ve attracted criticism in the past for being too white and blonde, but things have changed in the last few decades and now the House of Mouse boasts a diverse array of interesting and intelligent female characters for little girls (and boys) to look up to. 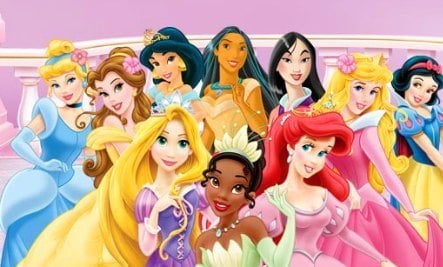 To celebrate this fact, in the article below we’ve brought you 20 fascinating bits of trivia you didn’t know about the official Disney princesses. Any true Disney fan will enjoy reading about these and remembering the first time they saw these princesses in action. Plus some of the facts are truly bizarre…

Everyone remembers the amazing scene in Frozen when Elsa unleashes her powers for the first time and makes herself a beautiful ice palace to live in. However, did you ever notice that the walls of the palace change colour whenever Elsa’s mood changes?

When Elsa is happy, the castle stays blue. But when she’s scared it turns red, and when she gets angry the walls turn yellow. When she’s sad, the ice palace turns a shade of purple. It’s like a disco ball! 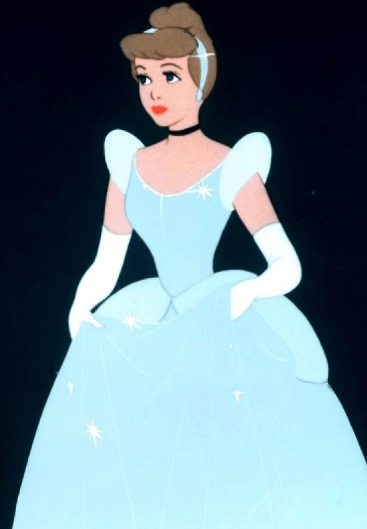 Walt Disney made no secret about the fact that he had a favourite Disney princess – and apparently it was none other than Cinderella! Ilene Woods (who voiced the character), once recalled Walt telling her: “You’re my favorite heroine, you know.” She replied, “You mean Cinderella?” “Yes,” he said, “there’s something about that story I associate with.”

18. Sleeping Beauty has the least lines in a movie of any Disney princess 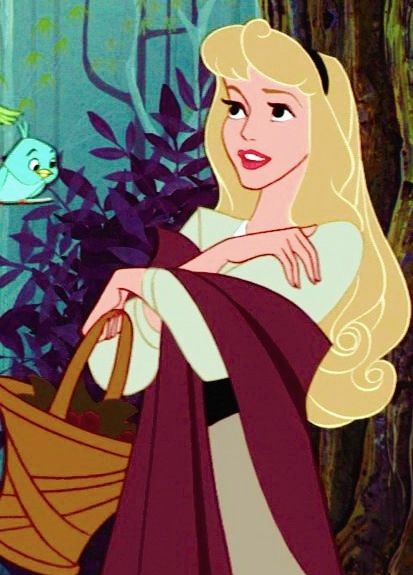 Princess Aurora only has 18 lines of dialogue in Sleeping Beauty! This is the least amount of lines that any Disney princess has had in a Disney film. There’s an obvious reason for this lack of speech though – Aurora is asleep throughout most of the movie! It all makes sense now…

17. Anna from Frozen is the only princess to sing with a villain 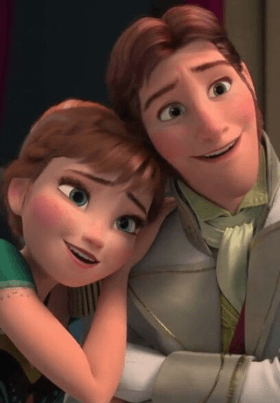 Princess Anna is Elsa’s charismatic younger sister. And she has a dubious honour bestowed upon her in the official Disney princess line-up – apparently Anna is the only princess to sing with a Disney villain. Frozen fans will remember that Anna enjoys a duet with her initial love interest (and sneaky schemer) Hans.

16. Jasmine and Mulan are the only Disney princesses who wear pants 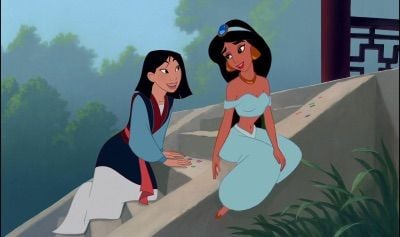 Dresses used to be a pre-requisite for any Disney princess, whether they were in official robes or just enjoying some downtime. But that all changed in 1992, when Jasmine became the first ever princess to wear pants rather than a skirt. Mulan followed this trend in 1998, but so far, these two characters are still the only princesses not to wear dresses.

15. Belle is the only person in her village who wears blue 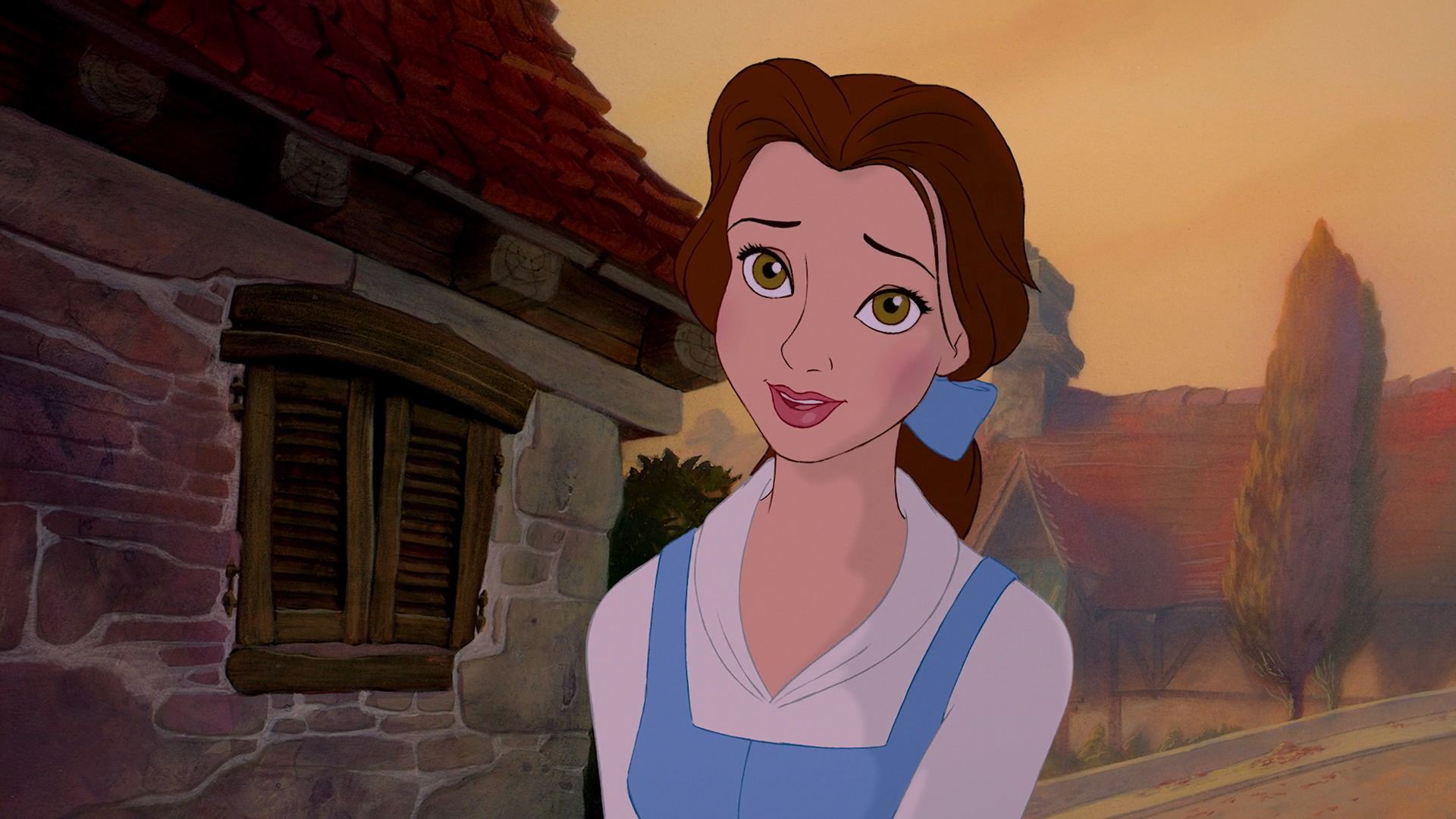 Most people who have watched Beauty and the Beast will remember that Belle’s standard outfit is a white top with a blue dress over it. And it turns out that Belle is the only person in her village to wear the colour blue, which was used by the animators to convey that Belle didn’t fit in with her peers.

On the other hand, the Beast wears blue and he has blue eyes too. Coincidence? 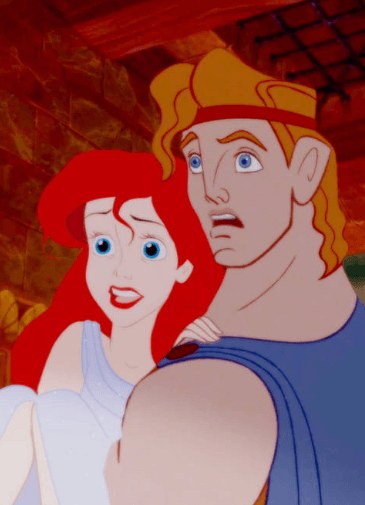 This is pretty cool! Hercules is technically Ariel’s cousin. How? Ariel is the daughter of Triton, king of the mermen. Triton is the son of Poseidon (god of the sea), who is brother to Zeus, aka Hercules’ father. So the two are actually related! Which has led to some very dodgy fan art in the past.

13. Mulan and Princess Tiana are the only left-handed princesses 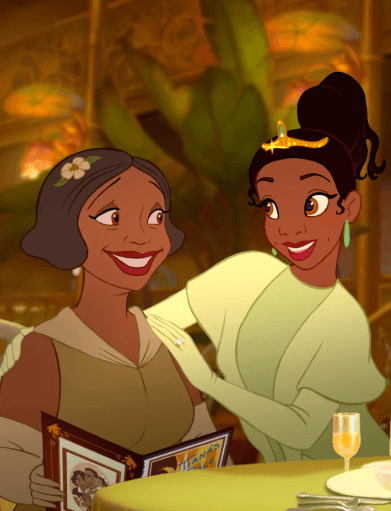 Apparently Mulan and Princess Tiana are the only lefties in the group. If you’ve already noticed this before then you’re watching too many Disney films…

12. Merida is the only Disney princess who doesn’t have an American accent 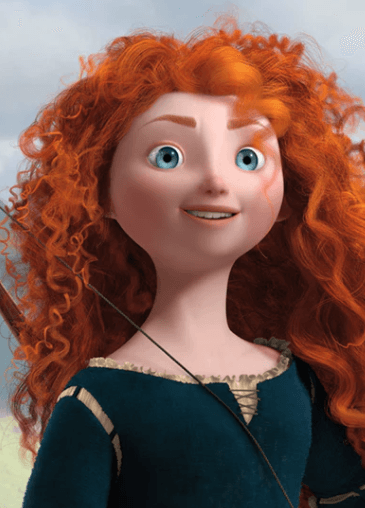 Merida is the star of Brave, which  – as we all know – is set in Scotland. Merida has a strong Scottish accent, meaning that she’s the only official Disney princess not to have an American accent. Which is actually quite strange when you think about it!

11. Belle is the only Disney princess with hazel eyes 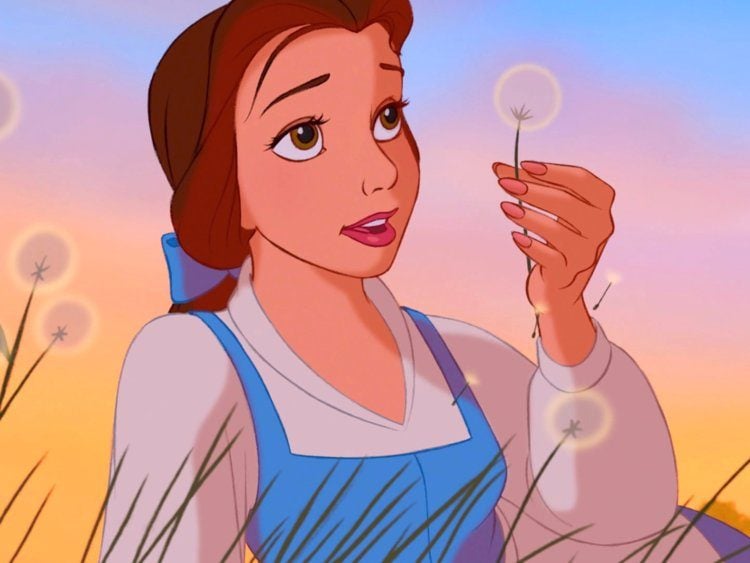 Belle is supposedly the only Disney princess with hazel eyes, even though to most people her eyes probably look brown on camera. Meanwhile, Aurora is the only princess with violet eyes, which viewers can easily notice when she wakes up after that kiss from her prince charming. 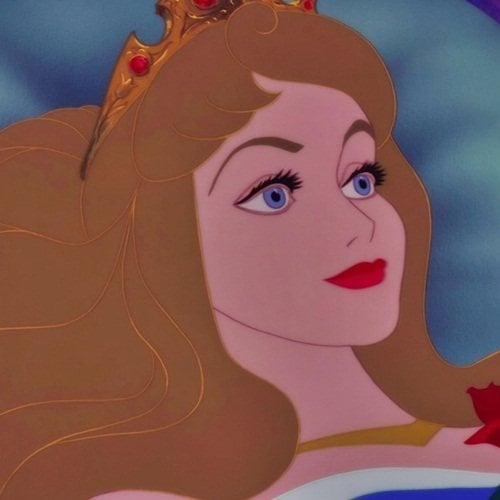 10. The only Disney princesses with more than one love interest are Pocahontas and Anna 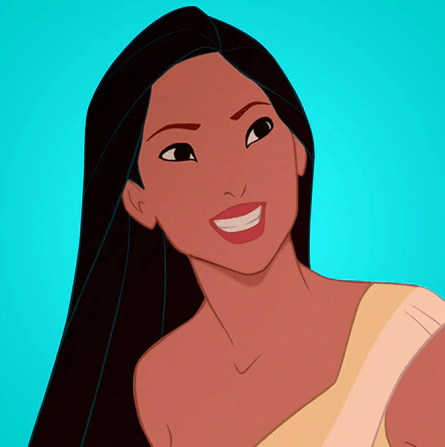 Most of the Disney princesses are content to try and have a happy ending with one guy.

But Pocahontas and Princess Anna have to contend with two suitors. Kocoum and John Smith both try to win Pocahontas’ heart, while Anna is pursued by both Prince Hans (the bad guy) and Kristoff (woo!). 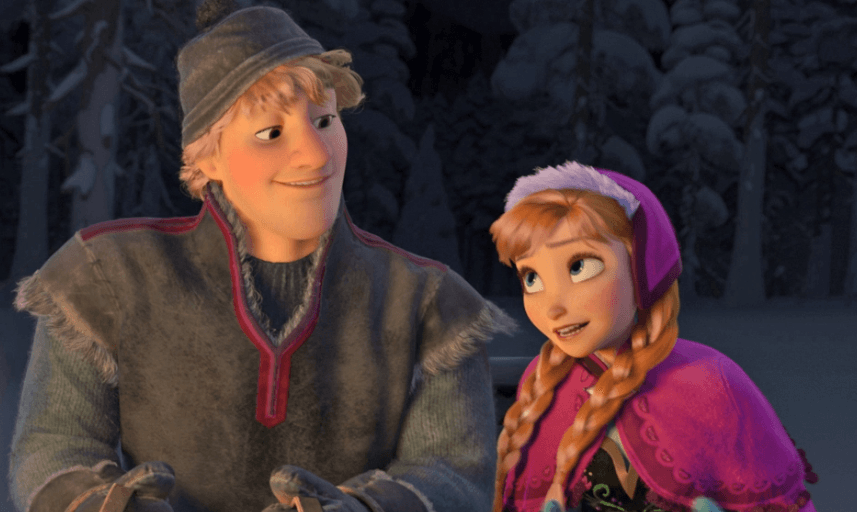 9. Belle’s hair strand falls on her face for a very good reason

It’s hard not to notice the way Belle’s hair always falls onto her forehead. And apparently this was done with a very specific purpose in mind. Linda Woolverton was a writer on Beauty and the Beast (the first female to pen a Disney film) and she explained: “The only thing I wrote [to describe Belle physically] was ‘she has a little wisp of hair that keeps falling in her face’. Because I wanted her not to be perfect. It was important that not every hair be in place.”

8. Cinderella loses her shoe three times over the course of the film 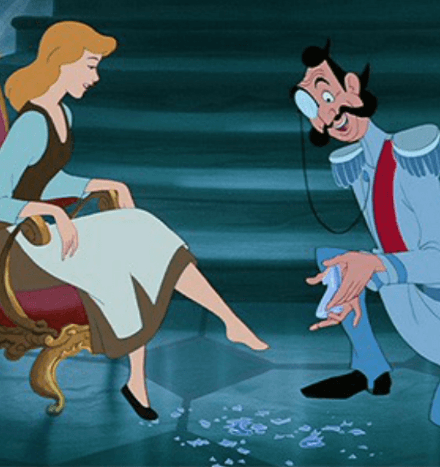 Cinderella has a lot of trouble holding on to that glass slipper. She loses the shoe three times throughout the movie – first when she delivers breakfast to her evil stepfamily, then again when she runs away from the castle at midnight. Lastly, she manages to lose the glass slipper when she runs down the stairs at her wedding. 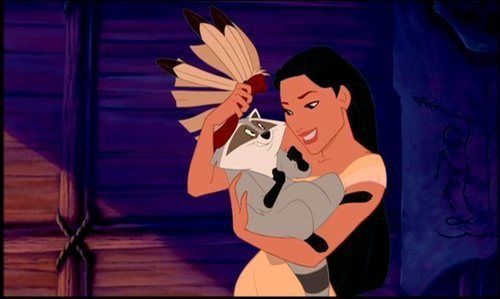 Everyone knows that Pocahontas has a cute little raccoon sidekick called Meeko. But apparently producers originally had very different plans for the character. They designed a talking turkey named Redfeather who was going to be voiced by John Candy(!). Wow.

Still, we love Meeko so we’re really not bothered.

6. Elsa is the only princess who isn’t a teenager 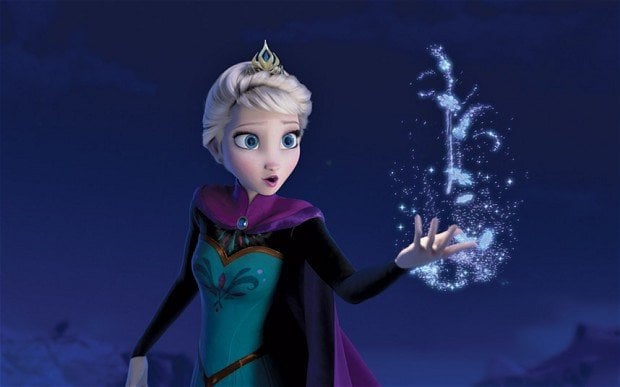 Elsa is actually a few years older than her other princess counterparts. She’s set to rule over the kingdom of Arendelle so it kind of makes sense that Elsa is actually 21 years old. This makes her the only princess to feature in the Disney line-up who isn’t a teenager.

5. Aurora was the last princess to appear on-screen before Walt Disney’s death 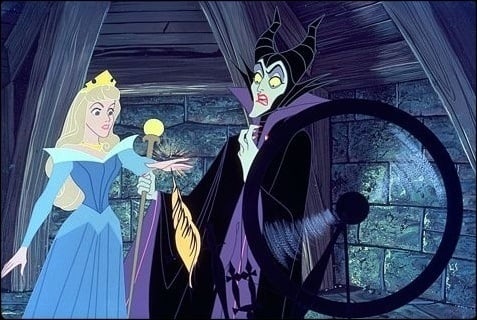 Aurora was the last princess to be shown in a Disney movie before Walt Disney passed away in 1966. The next princess to grace cinema screens only came decades later in 1989, when Ariel appeared in The Little Mermaid.

4. Mulan is actually based on a legendary Chinese female warrior 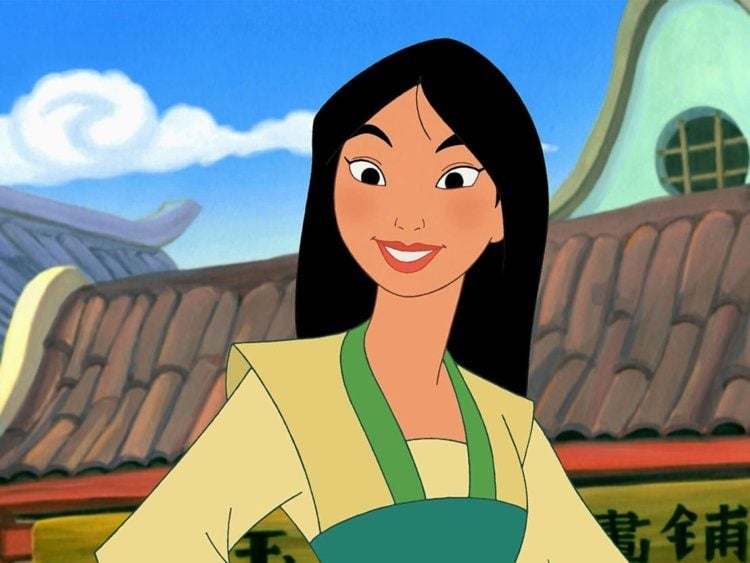 Mulan is loosely based on a mysterious Chinese female warrior named Hua Mulan. The story goes that Mulan did exactly the same as her Disney counterpart and managed to pass as a male warrior, even fighting in battles. However, it’s not 100% certain that Hua Mulan really existed. 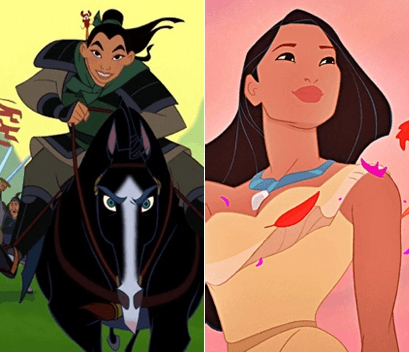 Did you know that Mulan and Pocahontas aren’t technically princesses? Although they are firm members of the official Disney princess group, Mulan isn’t actually born into a royal family – and doesn’t end up marrying a prince. Meanwhile, Pocahontas is a Native American chief’s daughter, which is amazing but still isn’t technically royalty. 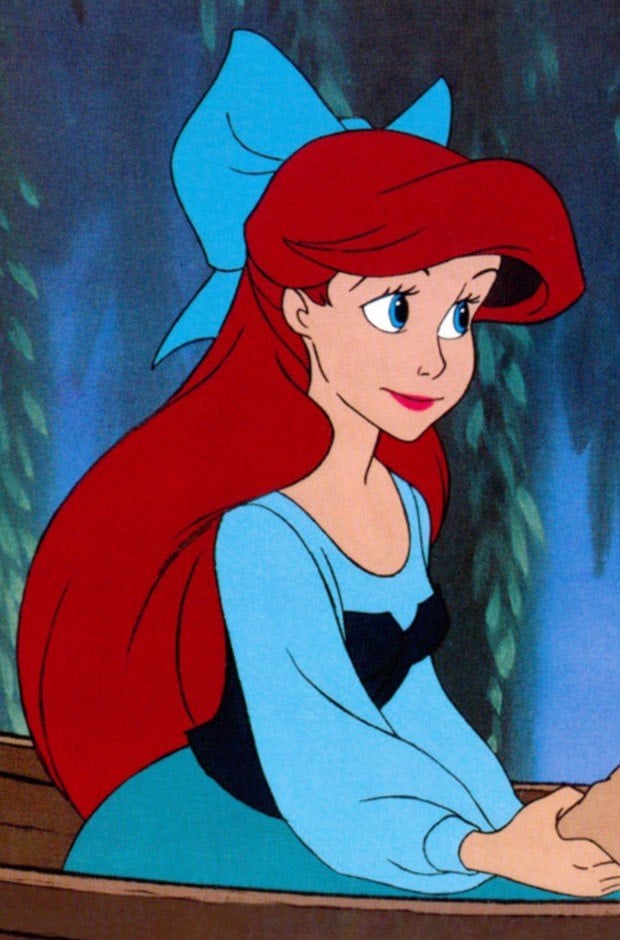 Glen Keane was responsible for animating Ariel in The Little Mermaid (along with the characters of Aladdin and the Beast). To gain inspiration for the character, he looked at a number of different child stars (creepy) to see which kinds of faces were considered to be attractive in the late 80s.

He eventually settled on Alyssa Milano. 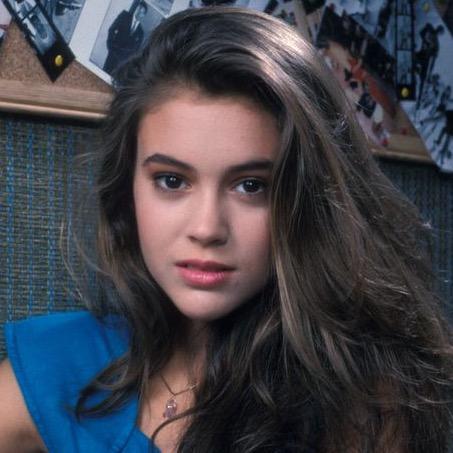 1. The only princess with dimples is Tiana

And last but not least – Tiana is the only Disney princess with dimples! Who knew?!

Did you enjoy all of these facts about the Disney Princesses? Let us know in the comments section!