It’s hard to believe, but the decade that brought us the mixtape, Annie Lennox and Super Mario started almost forty years ago!

I still think the year 2000 was only yesterday, so it’s hard to believe the 80s are already in their fab forties!

It’s fair to say that some things have moved on leaps and bounds, whilst others remain stubbornly the same.

Phones, for example. Back then, there was no carrying them around in your pockets, using them to listen to Duran Duran and playing Pacman.

This meant if you made plans over the phone, you couldn’t change them once you left the house.

It’s pretty amazing that anyone actually survived the decade… no seat-belts, second-hand smoke, dangerous playground equipment and running around for all hours without mobile phones.

The 80s taught children growing up in the decade the importance of patience.

You had to wait all week to get your fix of children’s television on a Saturday morning, or listen all day on the radio for your favourite song to play.

Growing up in this decade was a unique experience, some can argue for the better, and others the worst.

For those who think it was the worst, here’s a list of reasons to reaffirm your view and make you realise just how bad it was… 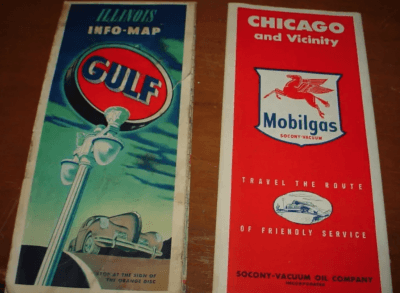 In the days before GPS, getting anywhere was a total hassle.

You had to be in the passenger seat, fighting a map and pointing at road signs.

Many an argument would be cause by a misdirection.

Now the only thing to get angry at when you make a wrong turn is the SatNav.

And the SatNav doesn’t argue back either. 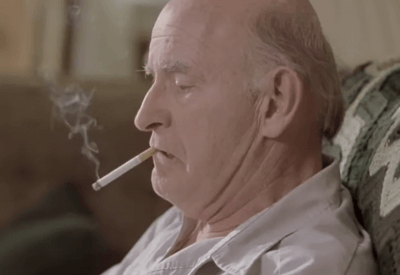 Just going back to the smoking thing, it was perfectly acceptable to smoke indoors and this seems crazy now.

Imagine how much our clothes smelled of smoke!

I recently walked into a bar in Prague where they can still smoke inside.

We’re happy that this is a thing of the past. 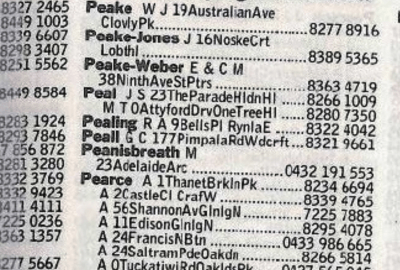 Sometimes, to pass the time, you would flick through the phonebook searching for weird names, or other people with your own last name wondering if you were related.

I remember looking up and down the list and seeing where they lived.

Now we can just store all our numbers on our phone.

The telephone book is now more or less redundant.

4. Sharing The One Phone 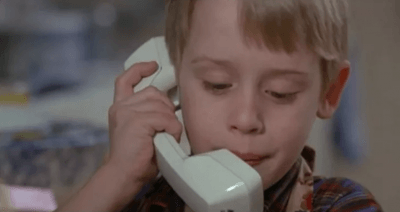 If you were on the phone talking to your friend, it was inevitable that you would here your Mum or Dad shout ‘get off the phone, I’m expecting a call.’

What makes their call more important than yours?

We don’t shout at them that we were waiting for someone to call.

They’d have clipped us around the ear.

Luckily this is no longer a problem. 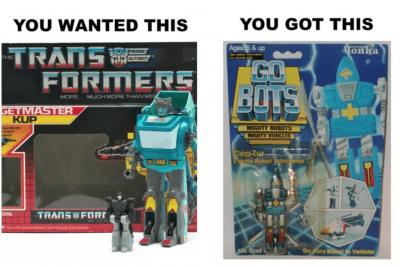 Even back in the 80s there was no guarantee that they had in what you wanted, so you very often ended up with a knock-off of the toy you really wanted.

It reminds me a bit like those magazines where you have to collect a piece of the toy each edition.

It was just much easier to buy the toy whole.

No one had time to fiddle about with little bits, putting it all together.

6. Your Music Being Ruined 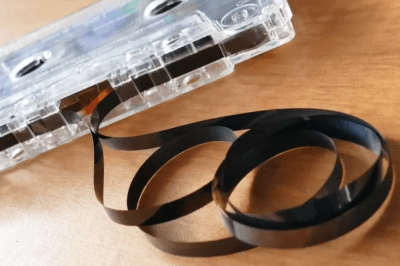 Music was listened to on tapes and they never got ruined, just like the one above. Grab the pencil to wind them back in.

Of course, the same thing easily happened with video tapes.

It was always satisfying when managing to rewind it back in successfully. 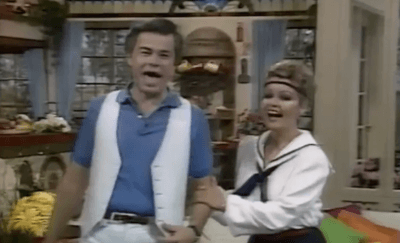 In the 80’s, they didn’t have a million channels playing programmes of all genres around the clock.

They certainly didn’t have Netflix. As such, when cartoons went off at 8 a.m, you were devoid of good television until they came back around again.

It was the decade that introduced us to And and Dec in Byker Grove, the tooting penguin Pingu and it made Saturday morning TV a staple viewing.

Button Moon, Newsround and Worzel Gummidge all filled the slots.

Children yearned for that Blue Peter badge and saved up used toilet roll tubes to make into some sort of art masterpiece. 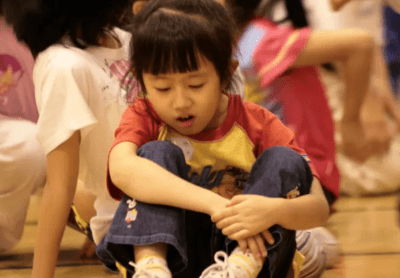 If your parents were late picking you up from the park or school, there were few ways to contact them, so you just had to keep your eye out for the car and playing the waiting game.

For some parents nowadays, the prospect of leaving your child with no means of communicating with them is terrifying.

You couldn’t just wait near the nearest phone box so they could call you when there were on the way.

So until they came, you just carried on playing without a care in the world. 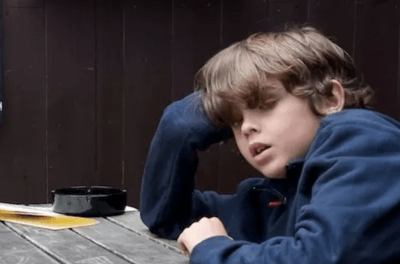 Sometimes you had to go shopping with your parents or attend an event that had nothing to do with you.

Very often, you would do this unwillingly and were therefore quite bored.

It was up to you and you alone to try and keep yourself entertained.

This is becayse you had no phone or portable gaming device to pass the time with.

Or you just sat and watched the world go by, observing everyone else doing the same.

10. Any Video Games Were Terrible 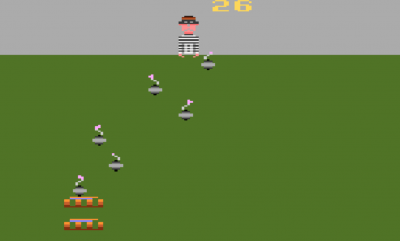 Whilst you couldn’t play games on the go, you could do at home but why would you want to?

Some people can’t give them enough praise, but let’s just say they were terrible.

As you can say, there wasn’t much progress that was made.

We can’t imagine so many people would be playing Fortnite if it was still in 8-bit. 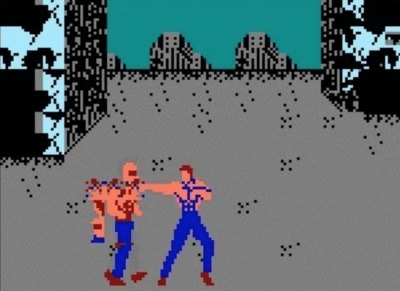 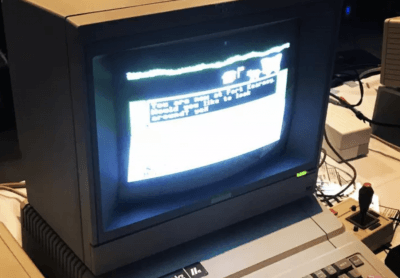 If your family had a computer…and that was a big ‘if,’ then it was a massively clunky thing.

It took up half of the living room and took half an hour to actually do anything.

The Apple computer was invented during the 80s.

They were a far cry from the slim things they are today.

Thank the Lord things have moved on from this. 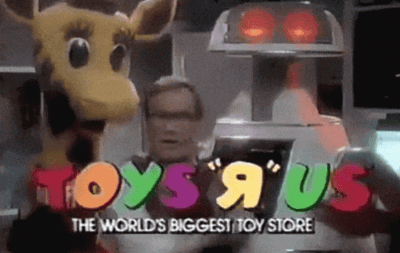 If you wanted a toy, you weren’t just able to get on Amazon and order it.

You had to do like fifty chores a day and act like an angel until you could convince your mum to drive you to the nearest toy store.

The action figure was a big collectable of the 80s.

Nearly every character and their extended family was released as a miniature plastic figurine.

How many did you collect?

13. The Cold War Was Still Hot 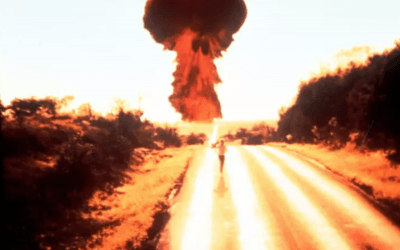 The Cold War was still in full swing, so kids in the 80s were convinced they were going to get caught up in a nasty nuclear war, especially after The Day After aired.

We’re not sure it has gotten any better to be honest.

What with all the goings on in Salisbury.

At least we can worry a bit less about North Korea now.

14. Queuing For The Box Office 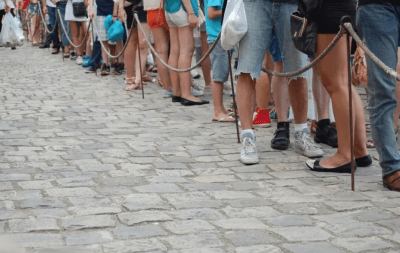 If there was a big cinema release, you couldn’t just go online and reserve your seats and tickets.

You had to queue up along with everyone else waiting for the box office to open.

Us Brits love queuing, so this isn’t really a bad thing.

The cinema experience just isn’t like it used to be. 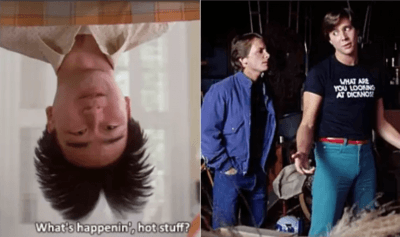 …a lot of them were, uh, casually racist and homophobic.

Just rewatch 6 Candles and Teen Wolf  and you’ll be like ‘erghhh.’

Many things that were said back then could not be said now.

Luckily this is something that has improved for the better. 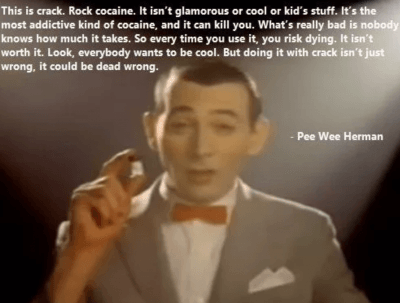 Whilst it was supposedly ok to let you inhale second hand smoke, adults over and over again warned you to “just say no!”

You literally got lectured about crack cocaine by Pee Wee Herman.

If a campaign was run like this nowadays with celebrities, people would just laugh at them.

Imagine in Adele tries telling you to stop popping pills.

We don’t think it would work very well. 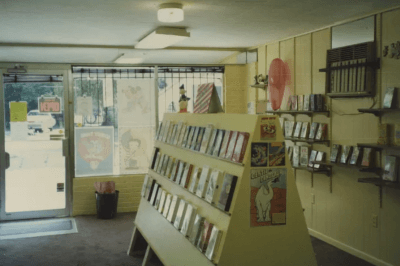 If you wanted to watch a movie at home, you had to buy something called a video tape from a video store.

Just look at the amazing selection available in this store!

Of course, with everything now available online, the video stores have become a thing of the past.

We miss the days of wondering around Blockbuster, wondering which film we wanted to rent for that night.

Those were the days. 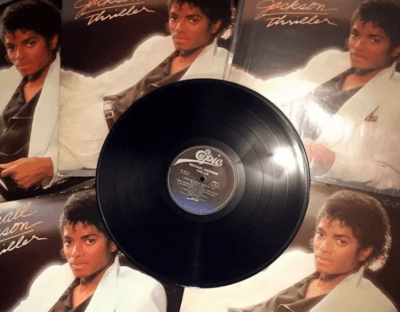 Another way of listening to your music. You couldn’t just say ‘hey siri, play ‘Thriller.”

You had to whip out one of these behemoths and keep changing them when you wanted to listen to something new.

Music just sounds so much better on them. 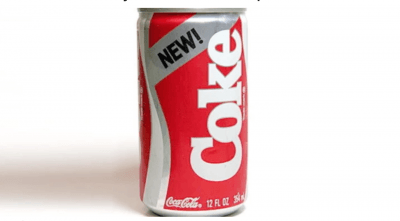 For part of 1985 they took Coke off the shelves and kids were forced to drink this strange new formula coke instead. *Shivers*

Can you imagine if they took it off the shelves nowadays and replaced it with some strange tasting substitute.

There would be an absolute uproar.

With the new sugar tax being brought in, maybe it just might be. 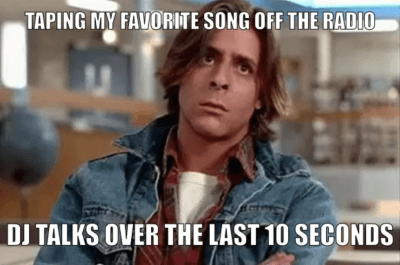 If you wanted to download a song, you had to wait for it to be played on the radio and then quickly hit record on the boom box!

See, this just goes to prove just how tough the 80s were.

Although to be fair, things were at lot simpler back then.

These millennials don’t know how easy they’ve got it.