The immense riches and fame aside, celebs are, in their private lives, more or less exactly like the rest of us. Like us, they make mistakes, goof off, get weird and even, sometimes, act like just boring, everyday people doing boring, everyday things. And, as it goes with the rest of us, there’s oftentimes somebody around ready to take a picture of those moments. 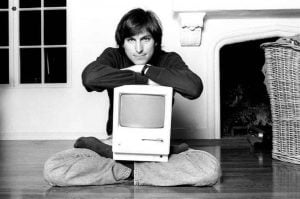 For celebs these moments tend to happen away from the spotlight of course. What images we’re allowed to see of any celeb, including those ‘candid’ shots deemed to be taken behind-the-scenes, are controlled by an always-thinking, all-powerful PR team.

What we see of a celebrity’s private life is rarely actually ‘candid’ or private, but rather more often prepared for public consumption. 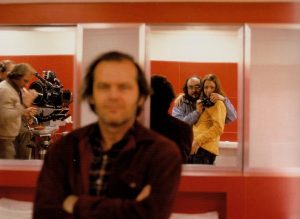 Every so often, however, a celeb snapshot will make its way into the public domain that was never meant to be there, that was probably supposed to remain private.

These are the photos that offer true glimpses of the rich and famous, that remind us of just how normal even the biggest celebrities are. 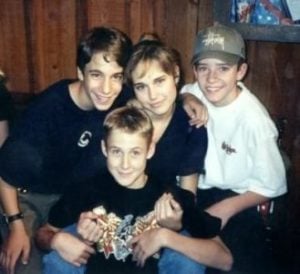 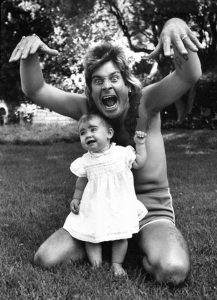 It’s perhaps no surprise to anyone who ever caught seminal MTV reality show The Osbournes, but off-stage, Black Sabbath frontman Ozzy Osbourne can be something of a sweetheart.

Here he can be seen enjoying some quality time with daughter Aimee in the mid-80s. 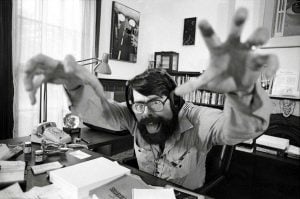 Apparently pulling the same pose as Ozzy in the item above, horror merchant Stephen King takes time out from writing scare-stories for fans to frighten the photographer in his den. 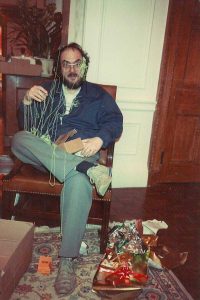 A famously private man, The Shining director Stanley Kubrick in his later years was rarely caught in candid photographs, or indeed in any photographs at all. Here, though, we see him enjoying Christmas with family, in 1983. 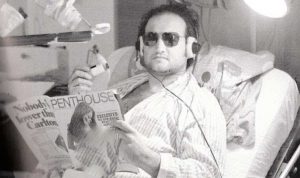 John Belushi didn’t get the career he deserved, owing to his untimely death from a drugs overdose in 1982, but the comedy legend still managed to pack in more than enough life to fill his 33 years.

Here he can be seen enjoying some music as he peruses Penthouse magazine, his current hospitalisation apparently of no great concern. 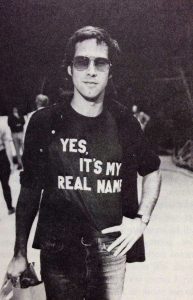 Here is Chase prior to becoming an 80s comedy megastar, when he looked movie star-ish enough to be fielding offers to become Indiana Jones or take Richard Gere’s role in American Gigolo. 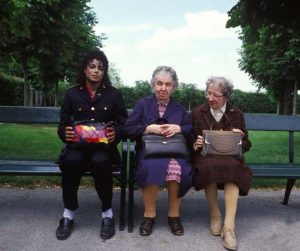 Quite simply the musician of the 1980s, Michael Jackson was prior to his turning recluse in the following decade a man after whom glitz and glamour always followed.

This is a very different kind of look at Jackson in the 80s, as he enjoys a rare moment spent among two people who – apparently – don’t seem to actually recognise who he is. 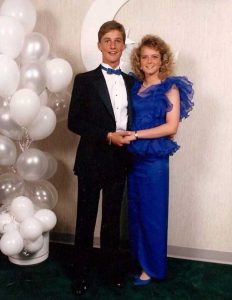 Alright, alright, alright. It’s no surprise to see that, even long before he was spitting honeyed lines and flexing his pecs for adoring audiences, Matthew McConaughey had a way with the ladies.

Here, a young McConaughey enjoys a classic mid-80s prom with a date whose perm couldn’t be more fabulous. 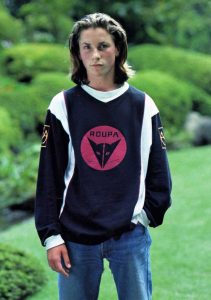 If you find it hard to imagine that brooding, uber-intense movie star Christian Bale has ever been dorky, consider this photo a painful adjustment. Here we see Bale as a young teen, during his transition from child actor into Hollywood leading man. 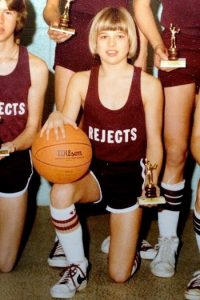 No, your eyes don’t deceive you: that Bieber-esque high school basketball star wearing a tank top bearing the word ‘Rejects’ is none other than Brad Pitt.

The haunted eyes suggest even he knows he’s going to regret this look someday. 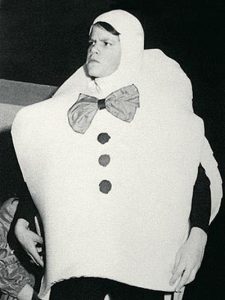 Though perhaps Pitt doesn’t regret that photo as much as Matt Damon does this one. Here we see Damon playing Humpty Dumpty in a 1989 school play, aged 18. 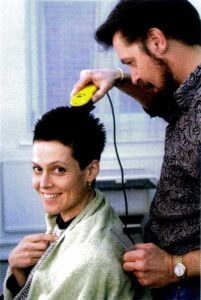 Taking one for the team with a smile, Sigourney Weaver gets her head buzzed for the third film in the Alien franchise.

No wonder the actress is grinning: it’s a style that Weaver apparently found ‘liberating’. 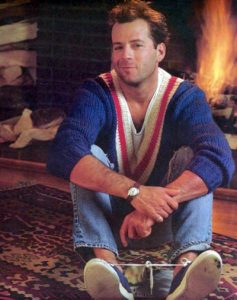 In contrast to Weaver, here we see a young Bruce Willis with hair intact, prior to getting all of his shorn off. This is Bruce in little-seen ‘playful’ mode, posing with his own shoelaces tied together. 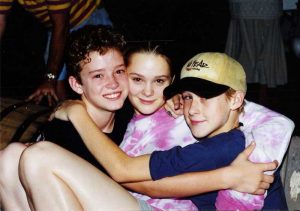 Unbelievably, Justin Timberlake and Ryan Gosling – one of our biggest male pop stars and one of the biggest movie stars, respectively – used to be buddies as kids, even rooming together during their time together in the Mickey Mouse Club.

Here they can be seen together in their Mickey Mouse days, before superstardom became familiar. 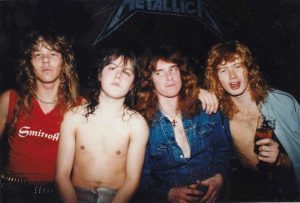 Emerging early in the decade, Metallica went on to become one of the biggest bands of the 80s. Here’s the original lineup in 1983, all baby-faced and already enjoying the rock star lifestyle. 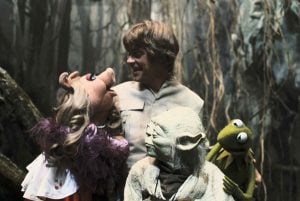 Frank Oz, who ‘played’ Yoda (voicing the character as well as working the puppet) in The Empire Strikes Back, first made his name on The Muppet Show, playing among other characters Miss Piggy.

Here, Oz’s two most famous characters meet on the set of Empire, though as we can see, that saucepot Miss Piggy has made her way straight to interstellar heartthrob Mark Hamill. 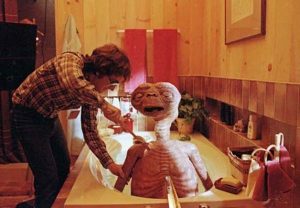 Another puppet encounter. In this photo, taken during the 1981 shoot of ET the Extra-Terrestrial, director Steven Spielberg gives his alien star a scrub down after a hard day’s performing. 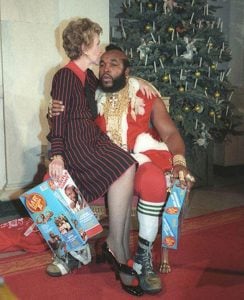 Who would have thought that Nancy Reagan, wife of then-President of the United States Ronald Reagan, had such a close relationship with Mr T?

It’s Christmas, 1983 in this photograph, and the A-Team star has made an appearance at the White House to give Mrs Reagan some of his own merch, while dressed up as a bling Santa. 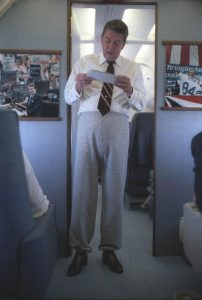 And here’s The Gipper himself. Above we see President Reagan in casual mode, wearing sweatpants while attending to business aboard Air Force One in his second term as Commander-in-chief. 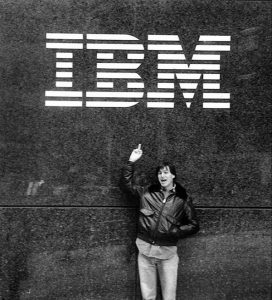 He wasn’t always the bespectacled, turtleneck-wearing super-CEO that we recognise the icon as today.

Steve Jobs once upon a time was a young man, with rebellion against the order in mind. And so, appropriately, we see here Jobs rodding off the logo of IBM, a rival to his own Apple.

He’s known to his fans as The Godfather of Shock Rock, but heavy metal rocker Alice Cooper in his downtime has a rather softer reputation. Here we see Cooper playing a friendly game of ping pong with Santa Claus and two unseen opponents. What more explanation do you need?