It’s the film that you can’t help but love, and keep on loving four decades after its original release. In clubs and parties all over the country, people will flock to the dance floor as they here the opening notes of the Grease medley. “Greased Lightning,” “You’re the One That I want,” and “Summer Loving,” are instantly recognisable and will even get the most dance-phobic folks up on their feet.

Its soundtrack album ended 1978 as the second-best selling album of the year in the United States, behind the soundtrack of the 1977 blockbuster Saturday Night Fever, and earned the film its lone Oscar nomination for “Hopelessly Devoted to You” (which lost the Academy Award for Best Original Song to Donna Summer’s “Last Dance” from Thank God It’s Friday at the 51st Academy Awards).

So forty years on, there’s plenty that you still might not know about the film. We’ve searched far and wide to present to you 20 things you may not have known about the hit film of the 1970s. Enjoy!

20. It Was Originally Going To Be Animated

Originally, producers had an idea to make it an animated film.

They eventually settled on live action but with animated opening credits.

The fames animator Ralph Bakshi attempted to buy the rights.

These plans fell through. He instead ended up making an animated version of The Lord of the Rings.

19. The Cast Were All Too Old To Be In High School

John Travolta was 23, Jeff Conaway was 26, and Stockard Channing was 33. 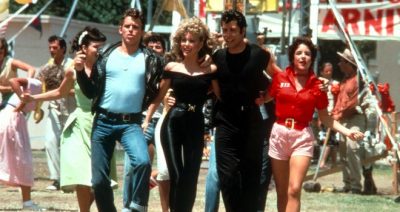 The two actors who were the closest to actual high school age were Lorenzo Lamas (Tom) and Dinah Manoff (Marty), who were both 19.

Movie critic, Roger Ebert, wrote: “One problem I always have, watching the movie, is that all the students look too old.”

“They’re supposed to be 16 or 17, I guess, but they look in their late 20s, and don’t seem comfortable as teenagers.”

18. The Word ‘Grease’ Is Not Mentioned

Grease may be ‘the word’, but it’s not mentioned once in the whole film

This is unless ‘greased’, which is of course sung in the song ‘Greased Lightnin’.

“Grease Is the Word” is the theme song written by Barry Gibb of the Bee-Gee’s, 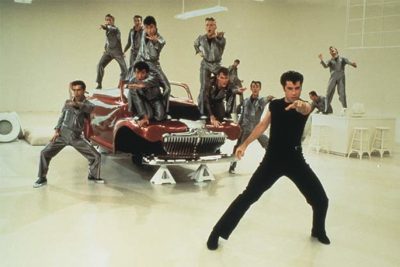 This is very much linking the movie to Travolta, Stigwood and Carr’s hit of last year the disco phenomenon “Saturday Night Fever”.

17. The Fonz Could Have Played Danny

Henry Winkler was considered for the role of Danny but he turned it down.

He was scared of being typecast after being in Happy Days.

After Happy Days ended, Winkler concentrated on producing and directing. Within months of the program’s cancellation, he and John Rich had collaborated to establish Winkler-Rich Productions.

Winkler said he had wanted to be an actor from the time he was a young child.

16. Carrie Fisher Was Considered For The Part Of Sandy

We can’t imagine anyone other than Olivia Newton John as the iconic Sandy, but it could have been very different! 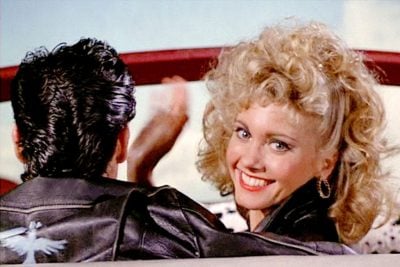 Grease’s director (who shared a room with George Lucas during their college years), was interested in Carrie Fisher after seeing her film a battle scene for the original Star Wars.

In the end he continued the search for Sandy because he didn’t think she would be right for the part. 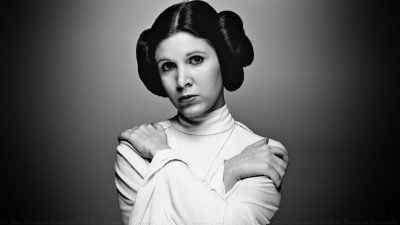 Could you imagine Fisher playing both of these iconic roles?

15. The King Himself Was Offered A Role…

Elvis Presley was offered a role in the film (probably as the Guardian Angel), but he turned it down.

He died whilst the film was being shot.

Rizzo sings “Elvis, Elvis, let me be! Keep that pelvis far from me!”, and sadly Elvis died the same day that scene was filmed (16th August 1977). 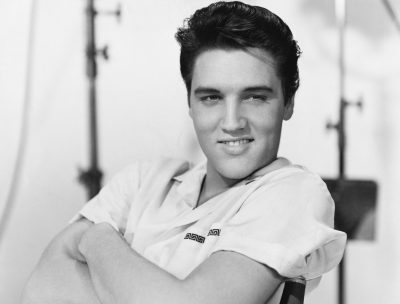 John Travolta insisted that he have “blue black hair like Elvis Presley and Rock Hudson in the movies” because “it’s surreal and it’s very 1950s.”

14. ‘Hopelessly Devoted To You’ Wasn’t Originally Meant To Be In The Film

One of the biggest songs in the film nearly didn’t make the cut!

‘Hopelessly Devoted To You’ was added after filming ended because producers wanted Sandy to have a solo ballad.

The song ended up being the only one that was nominated for an Oscar.

It seems like some cast had trouble lip-syncing the songs. John Travolta kept lip-syncing “heap lap trials” instead of “heat lap trials,” and Randal Kleiser claims it’s visible in the finished product.

13. Any References To Coca-Cola Were Blurred Out

Prior to the film’s release, Allan Carr made a product-placement deal with Pepsi.

Reshoots were said to be too expensive and so they had to blur or cover up any poster with Coca-Cola in post-production.

12. The Cast Consumed Rather A lot Of Bubble Gum

The cast reportedly chewed over 100,000 pieces of bubble gum during the film’s shoot.

To get to know each other, the cast had a sock hop on the first day of rehearsal to learn dance moves.

The school’s name, Rydell High, is a reference to teen idol Bobby Rydell who had a million selling hit with “Swingin’ School” in 1960. 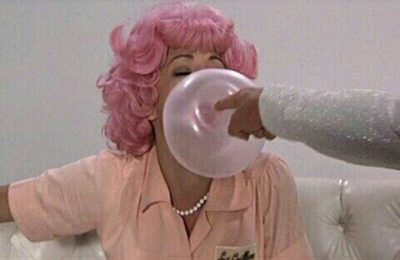 Their jaws must have ached after all of that chewing!

The trousers worn during ‘You’re The One That I Want’ were so tight that the zip broke. 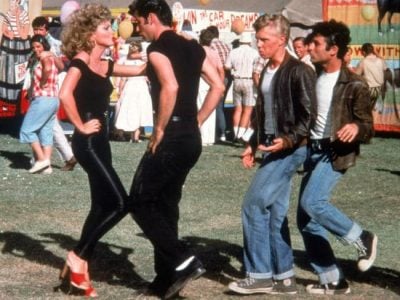 This meant that Newton-John had to be sewn into them for the last sequence, the carnival at Rydell High.

“They sewed me into those pants every morning for a week,” she claimed. 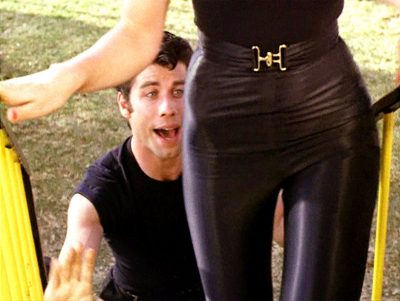 “Believe me, I had to be very careful about what I ate and drank. It was excruciating.”

10. Rizzo’s Hickeys Were For Real

The hickeys on Rizzo’s neck in the diner scene were actually given to Stockard Channing by Jeff Conaway (who played Kenickie). 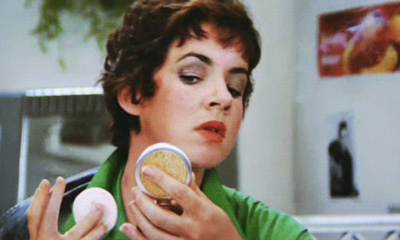 In the scene she can be seen covering the hickeys with makeup.

We wonder how long she had to keep them covered up for.

9. John Travolta’s Sister Is In The Film

John Travolta’s sister, Ellen Travolta, plays a waitress who says the line “Oh, there’s Danny and Sandy” when watching them dance on TV.

Talking of sisters, Jeff Conaway was so infatuated with Olivia Newton-John he was tongue-tied whenever she was around. 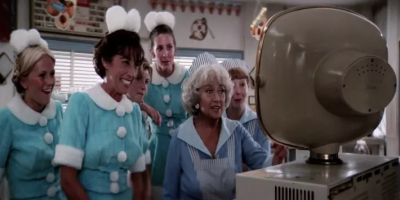 We guess if you can’t get the girl herself, the next best thing is to go after a family member.

8. Danny And Sandy Were Reunited For Another Film

John Travolta and Olivia Newton-John reunited in 1983 for the romantic comedy ‘Two of a Kind’, which got a frosty critical reception. 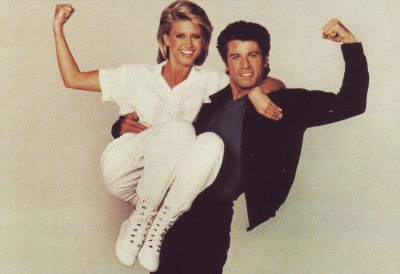 They were also brought together again in 2012 for a Christmas album called ‘This Christmas.’

All music editor Stephen Thomas Erlewine gave the album three out of five stars, felling that “This Christmas winds up serving both audiences equally well: it’ll brighten the season of fans who take this at face value, and for those looking for a ridiculous dose of celeb Christmas cheer.”

After Olivia Newton-John was cast as Sandy, her character’s background was changed to accommodate the actress’ own background. 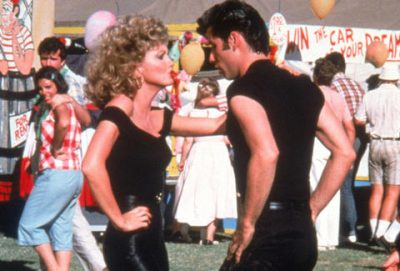 In the original musical, Sandy was an all-American girl and her last name was Dumbrowski.

However, in the movie version, she became Sandy Olsson, from Australia. 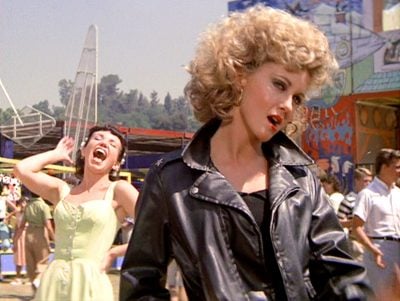 John Farrar, Olivia Newton-John frequent songwriter, wrote two new songs for the film while other songs from the Broadway musical were dropped.

“Greased Lightning” was originally supposed to be sung by Jeff Conaway’s character, Kenickie, just like it is in the stage version.

John Travolta used his clout to have his character sing it.

The director felt it was only right to ask Conaway if it was okay.

At first he refused, but he eventually gave in. Poor Conaway.

5. The Film May Have Lead to Conaway’s Eventual Death

While shooting the “Greased Lightning” musical number, the Kenickie actor Jeff Conaway was accidentally dropped, hurting his back.

Conaway started taking pain killers to help, eventually abusing prescription drugs, and spiralling into drug addiction until he died in 2011 at age 60.

In the decades following the film’s release, a theory circulated that Sandy actually drowned at the beach, and the rest of the film is a near-death hallucination. 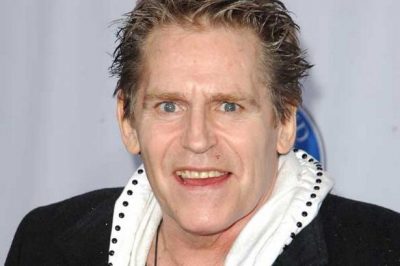 In 1978, the film grossed just under $160 million domestically, more than other movie that year. 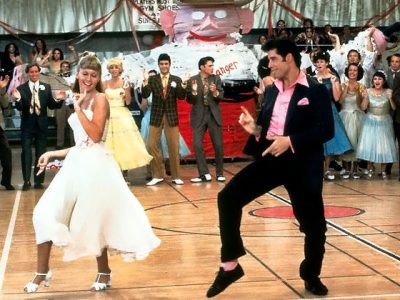 It also became the highest-earning musical of all time. 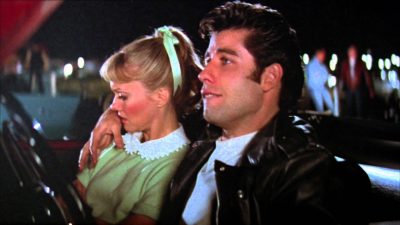 3. The Original Writers Weren’t Invited To The Set

The original writers of the musical’s book, Jim Jacobs and Warren Casey, weren’t invited on set during production of the movie. 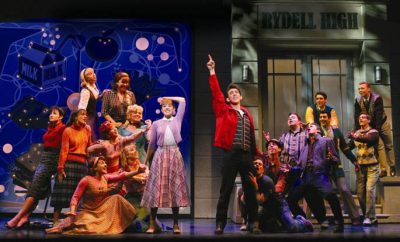 John Travolta had played Danny over 100 times on the road doing the musical, and gradually got more lines from Jacobs and Casey’s version into the film, which was written by Allan Carr and Bronté Woodard.

When Travolta didn’t think a line of dialogue was working, he would quote a line from the original. 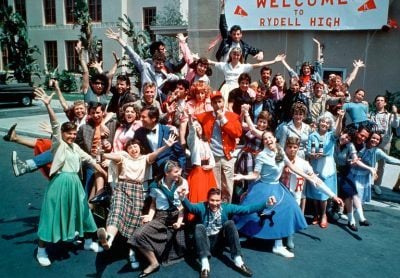 Kleiser would tend to agree and use that line instead.

It is far to say that Sandy goes through an incredible transformation during the film. 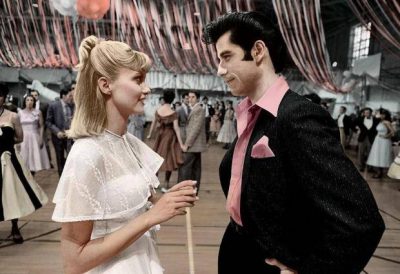 Jim Casey, the show’s creator, said the controversial ending, when Sandy conforms to the Greasers and changes her look to fit in with the T-birds and the Pink Ladies, was actually supposed to be spoofing other movies.

Other movies where the rebel gives up his bad ways at the end and decides to turn over a new leaf.

Sandy, instead of being bad and turning good, was good and turned bad.

1. Sandy Was Not Supposed To Participate In The Dance Contest

The original idea was that Sandy was not supposed to participate in the dance contest at all. 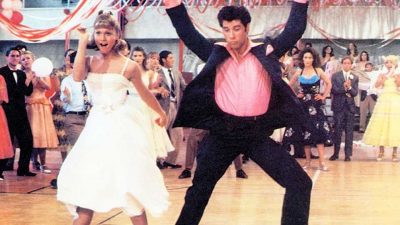 Sandy was supposed to be sidetracked and subdued by Sonny before the contest even starts.

This would allow Chacha to jump in and take her place, and win the contest.

But Olivia Newton John really wanted to do some dancing in the movie; even though she was not a professionally trained dancer like Travolta.

She managed to convince Randall Kleiser to let her dance with Danny in the contest for a few minutes; and then for Sonny to jump in and subdue her a few minutes later.