20 He-Man Characters From The Original Cartoon

Eighties kids seem to remember different things, and what one person remembers fondly, others may not remember at all or may not have been particularly bothered about. That’s how life works – with a few exceptions. One thing that all children of the 80s seem to have in common is the fact that the original He-Man and The Masters of the Universe cartoon was, put simply, awesome!

He-Man has made a few attempts at a come-back over the years with the Dolph Lundgren film, the re-booted cartoon series, and the recent adverts for a certain comparison site that takes-off Dirty Dancing with He-Man and Skeletor. As such there are even rumblings of a full-on reboot or a new He-Man movie in the pipelines. Whatever happens in the future, it’s fair to say that one of the greatest things about the original cartoon was the wide range of fascinating and original characters.

In the article below, we take a look back at 20 classic He-Man characters. Did you have any of the action figures of these heroic warriors? Scroll through the article below and take a trip down memory lane… 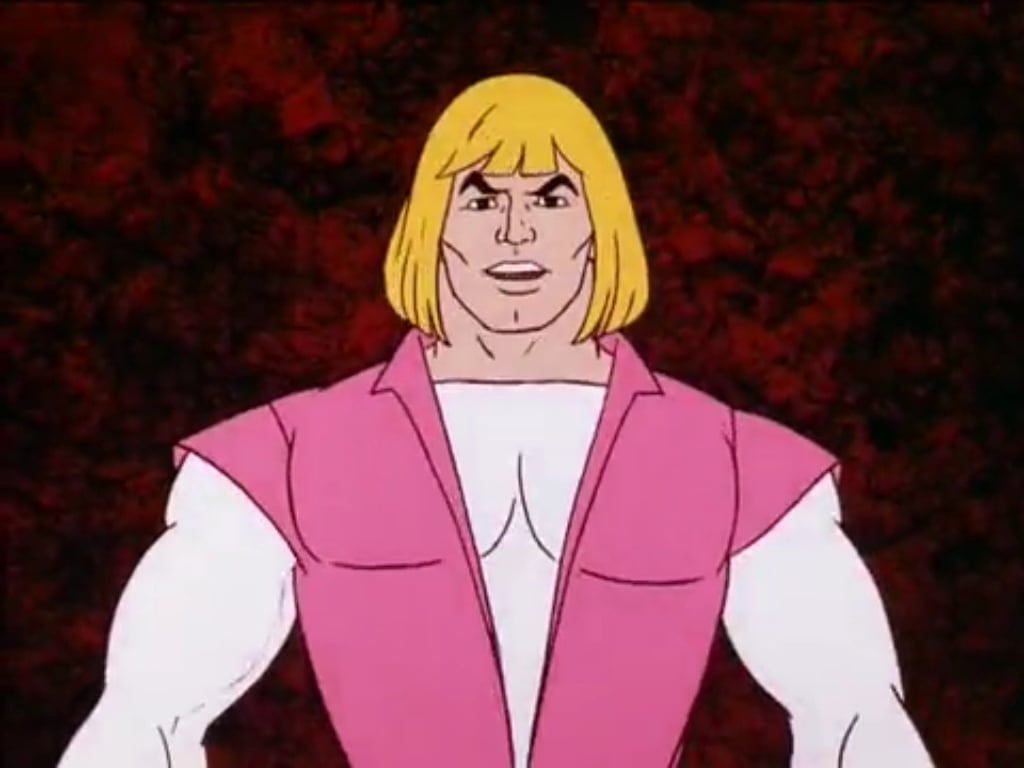 The Prince of Eternia who lives at Castle Grayskull has a major secret that only a few people know. Adam is actually very smart and intelligent, but always plays dumb and incompetent so that people don’t guess that he simply has to hold aloft his magic sword and say, “By the Power of Grayskull…” before transforming into… 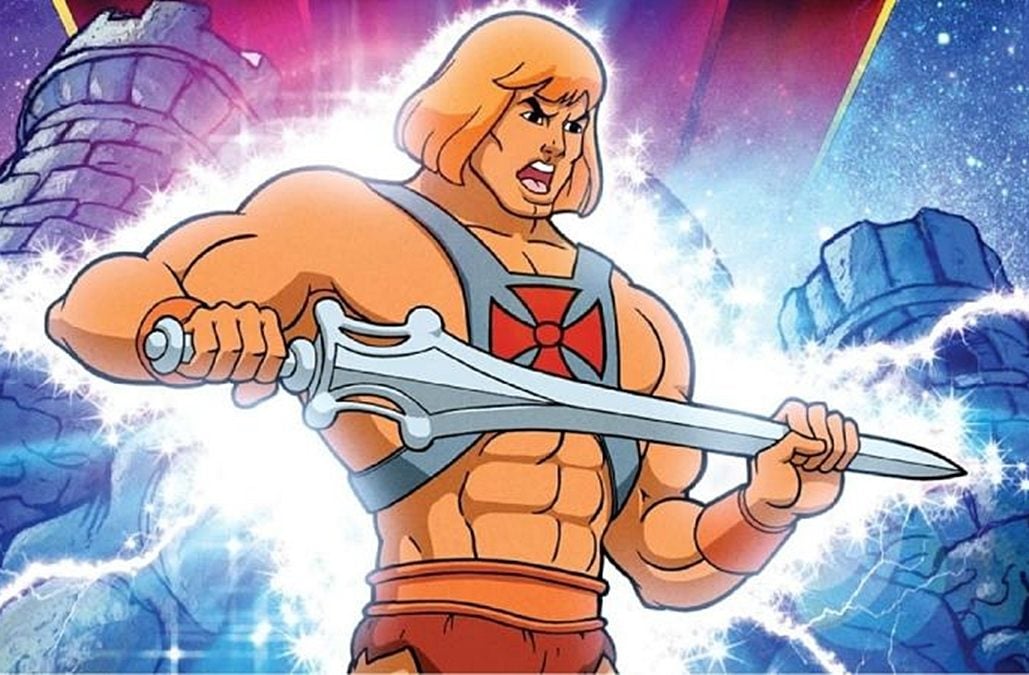 The most powerful man in The Universe! He-Man was the ultimate hero, there was little he couldn’t do. He would always save the day with the help of his friends, and then have some wise words of wisdom at the end of the episode (or else one of his friends would give it). Was there any Eighties Kid who didn’t have a He Man action figure, complete with his iconic sword of power? 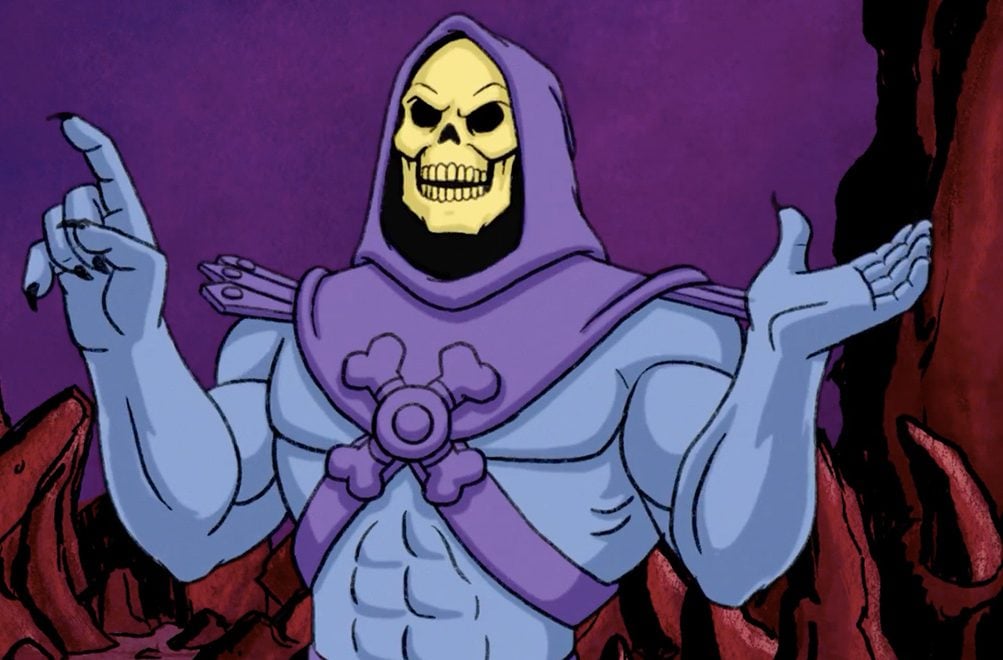 Every hero needs a villain who is just as evil as the hero is good, and Skeletor was perfect for this. Every week he would be trying to take over Eternia with his evil horde and destroy He-Man in his lust for power, and every week we were terrified he might succeed! A truly great villain! 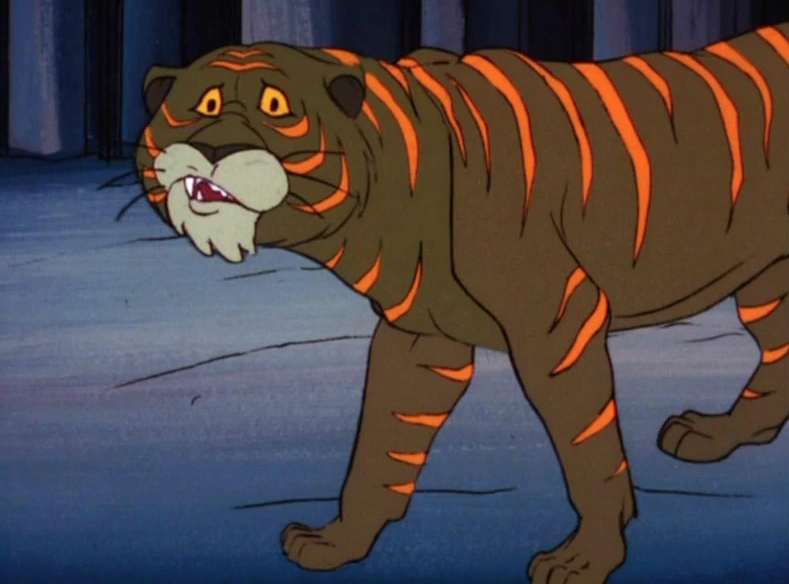 Prince Adam’s best friend, Cringer is a terrified tiger who is pretty much afraid of his own shadow. He literally couldn’t be more different to his alter-ego… 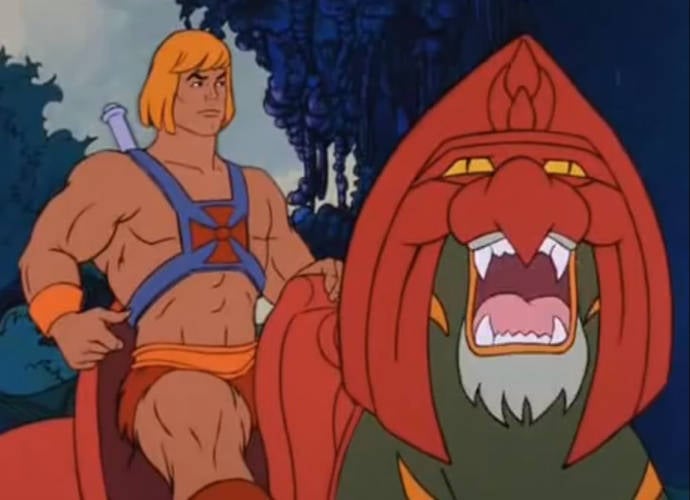 When Adam becomes He-Man, he always turned Cringer into Battle-Cat, a massive, ferocious and brave version of Cringer who was also armour-plated! 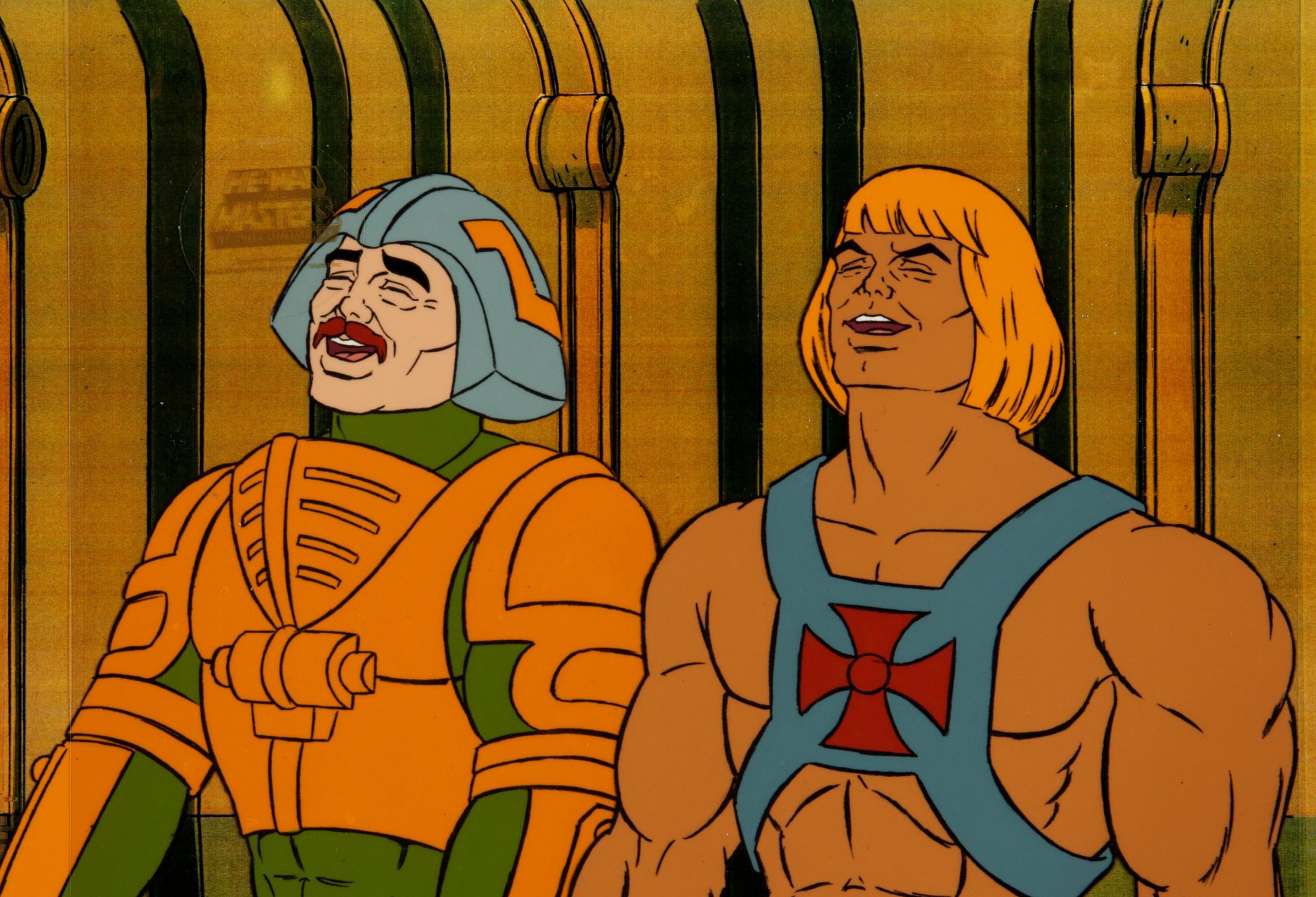 One of He-Man’s greatest friends and allies, with lasers in his wrists and a master engineer who could create and fix almost anything. 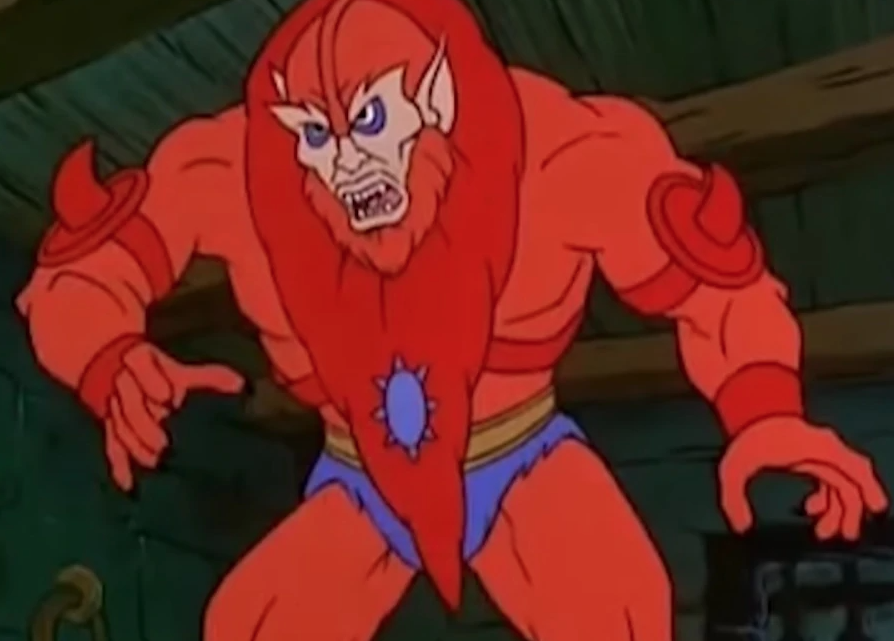 One of Skeletor’s main henchmen, Beast man was a furry oaf who was not very bright at all but was incredibly strong and could use his beastliness to get animals to do his evil bidding. 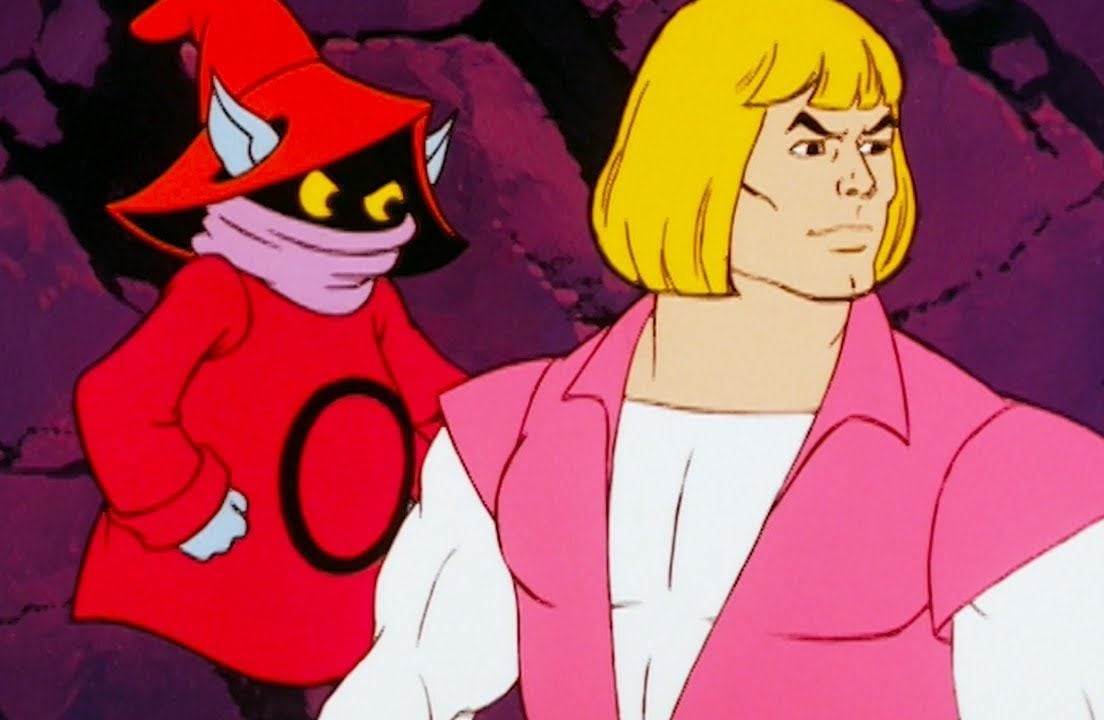 Orko was a wizard from another realm, the problem was he just wasn’t very good. His magic would always go wrong, usually at Man-at-arms’ expense. Except when it was life or death and Orko would whisper something like “please work” and as if by magic (pun intended), his spell would work perfectly! 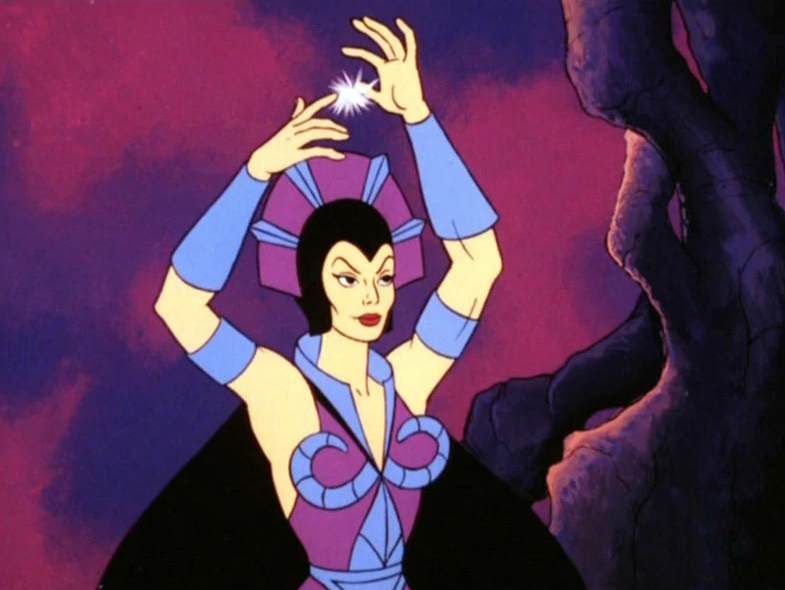 Skeletor’s own magic-wielding witch, Evil-Lyn was always vicious and more than happy to try and create mischief to try and gain power. Pure nastiness, and a mainstay of the animated series. 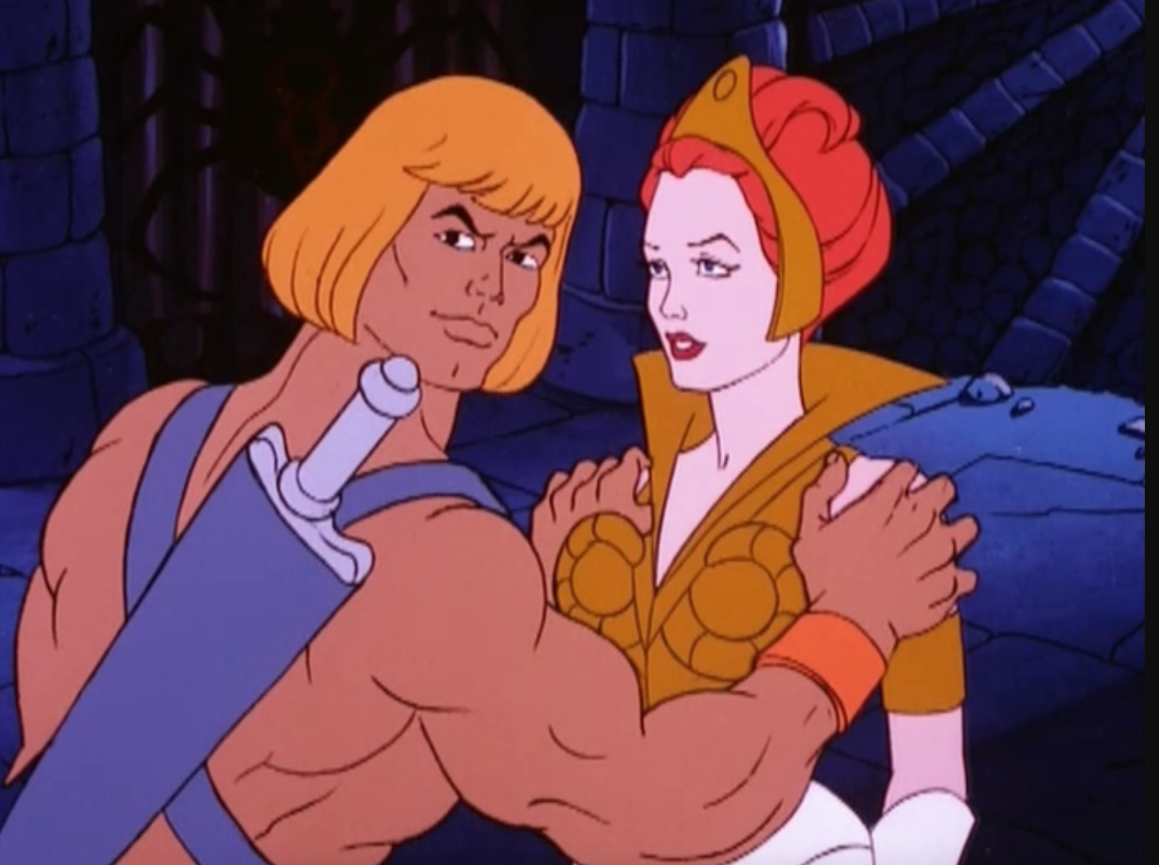 Man-at-arms’ daughter and leader of the Royal Guard, Teela knew how to handle herself. She always seemed very bright but never worked out about the Adam/He-Man thing so I’m not convinced! While her battle armor might have been a little impractical, her inclusion in the toy line meant that He Man wasn’t just for boys. 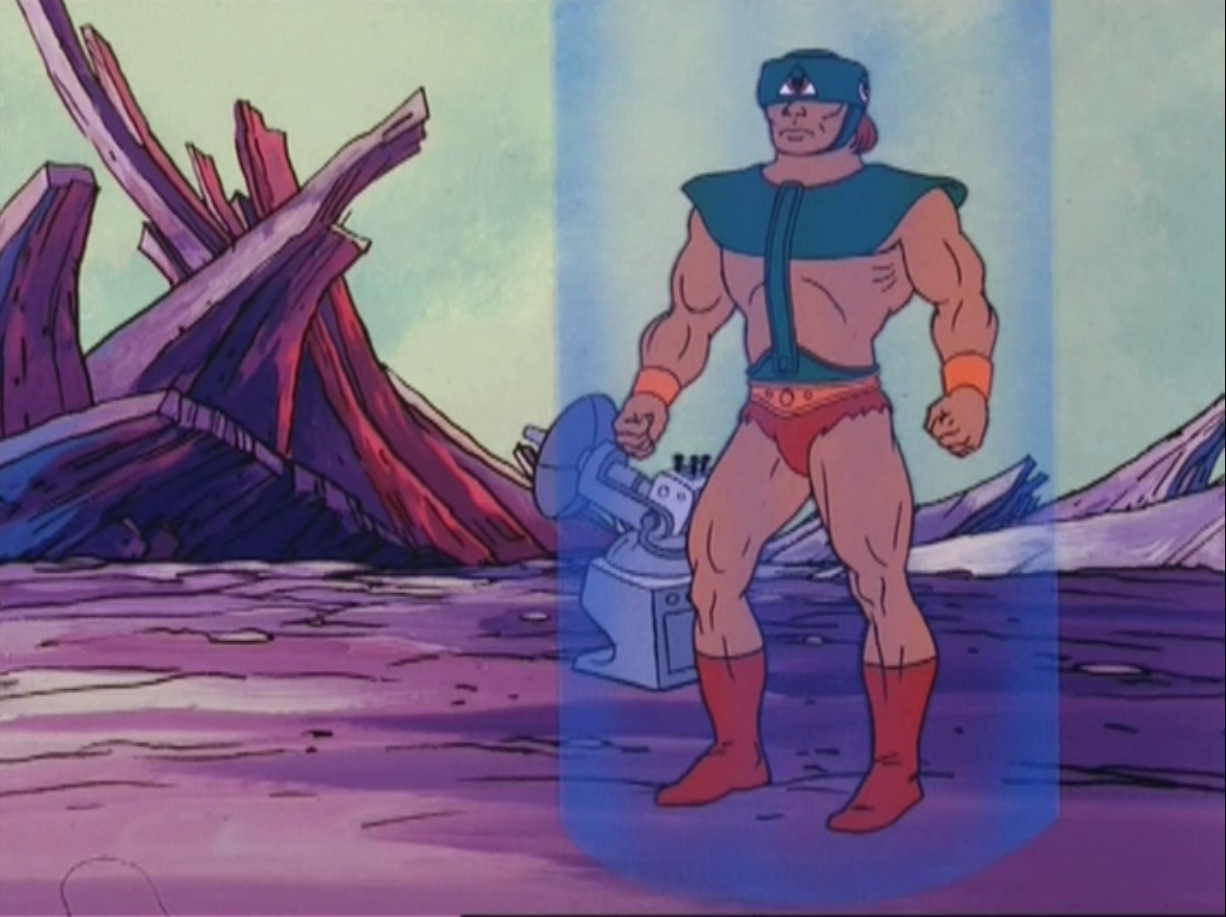 Another of Skeletor’s evil henchmen, Tri-Klops could use any one of his three mechanical eyes to see long distances, or shoot lasers and weapons! He was always a great characters in the adventures of He Man. 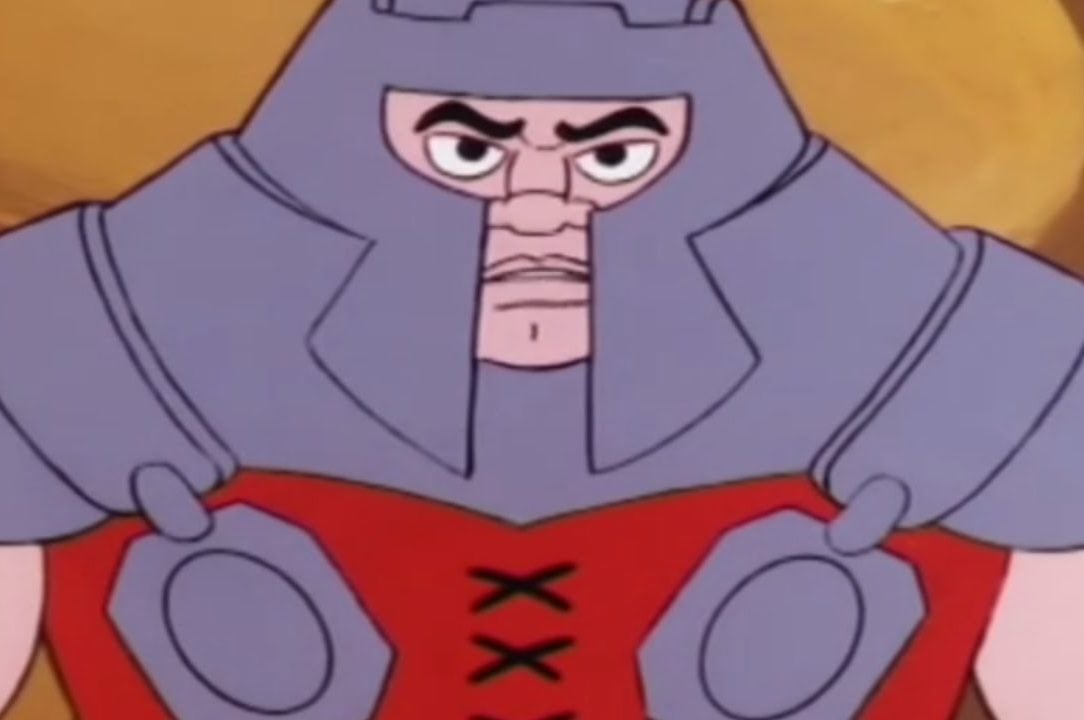 Like many archetypal 1980s cartoon characters, Ram Man was not very bright at all, probably because of all the bumps to his head! With reinforced armour around his head, his spring-loaded feet would send him flying as a human battering ram! 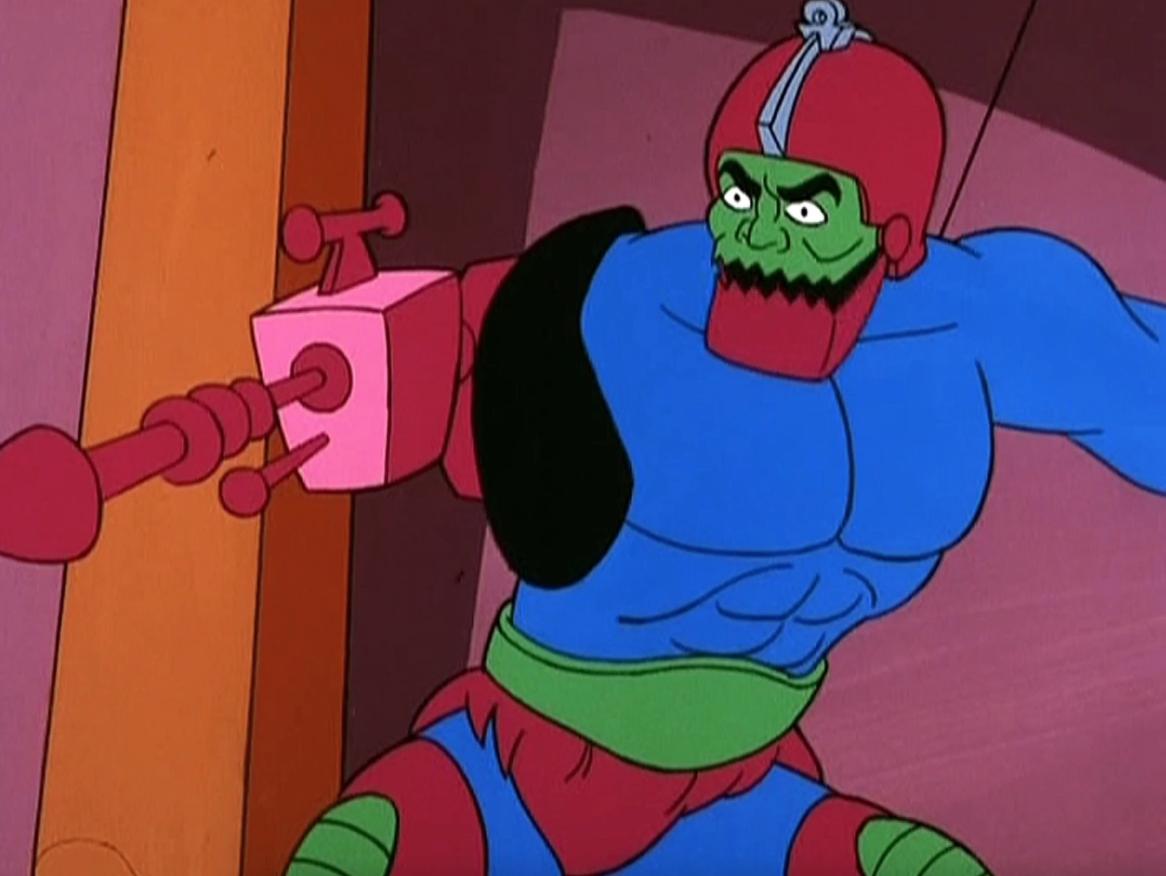 With big metallic teeth almost like a more mechanised version of Jaws from James Bond, Trap-Jaw could also swap one arm with various devices like laser guns and rocket launchers! 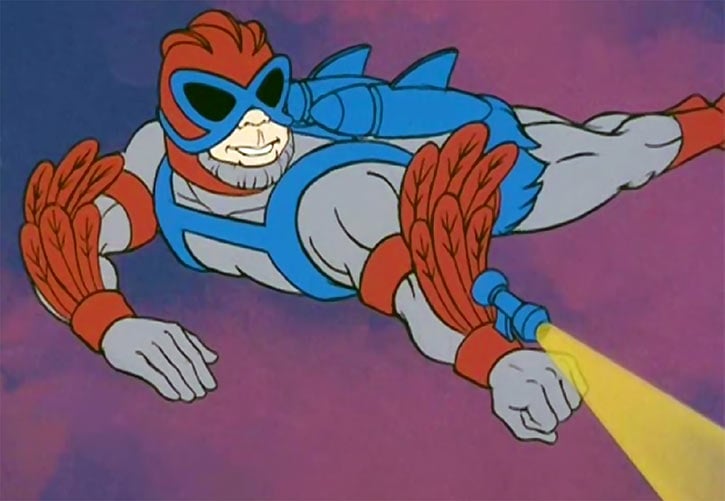 Another of He-Man’s trusted friends, Stratos lives amongst people with the ability to fly, he would often cover distance at speed or scout a situation for He-Man when needed, bringing him news of new adventures. 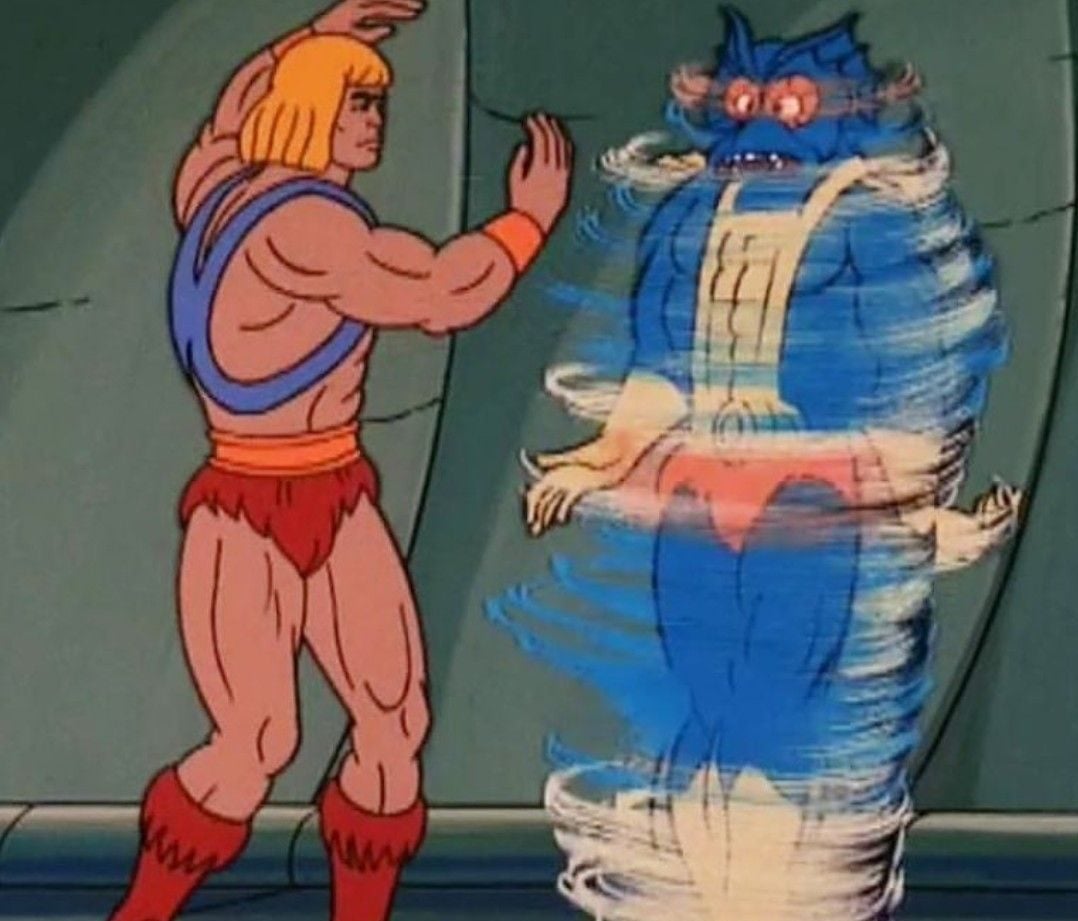 An amphibious monster, Mer-man always spoke like he was gargling a pint of phlegm! He would often be seen on land then return to the water as soon as he was bested by He-Man and his allies! 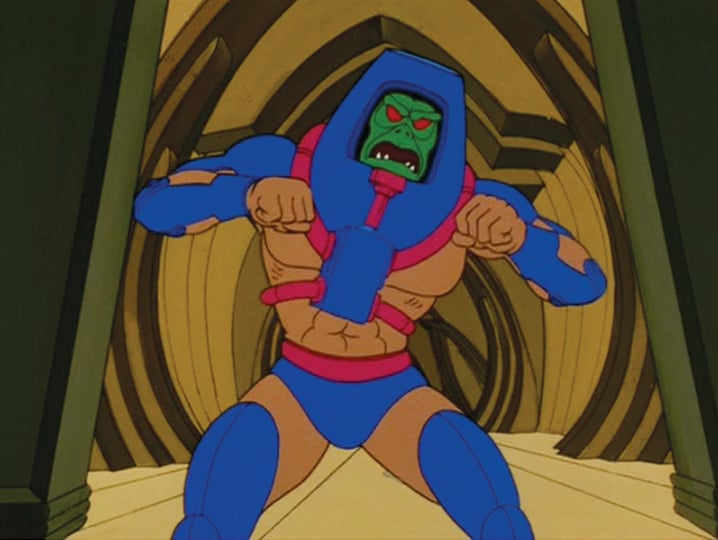 Starting as more of a villain, Man-E-Faces had three different faces, a person, a robot and a monster. The monster was always out of control leading people to believe he was evil, but he turned out OK in the end – awwww! 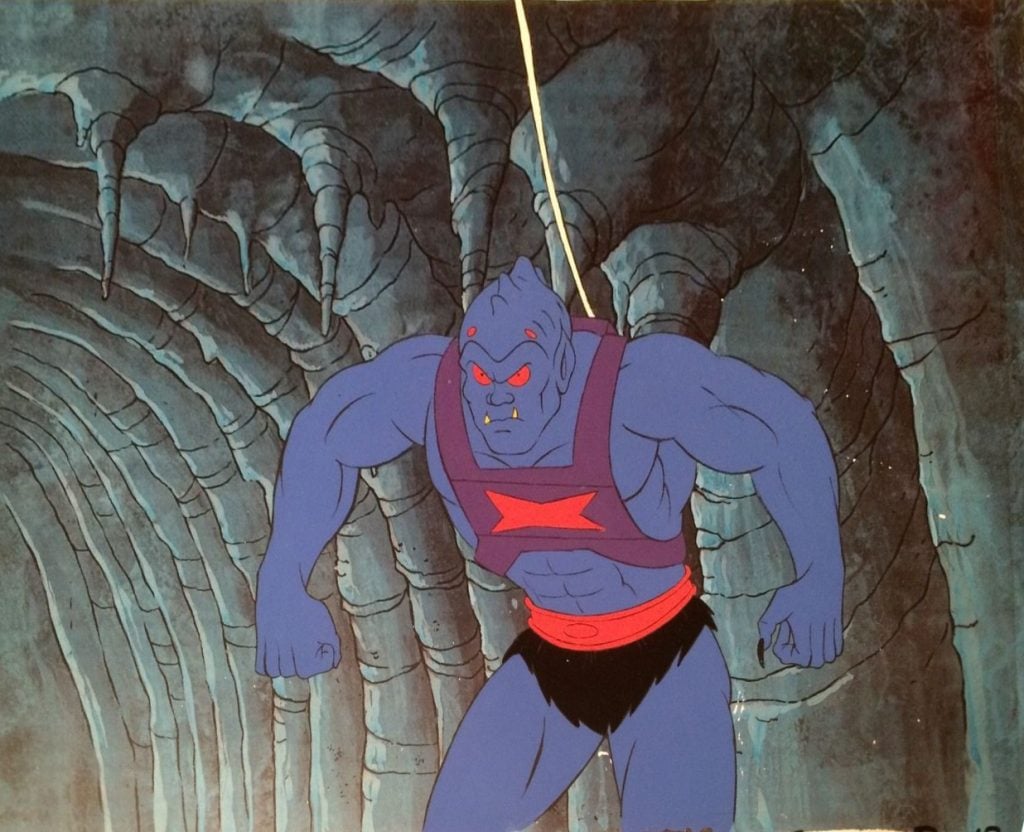 Another evil henchman, Webstor had a grappling hook in his backpack that allowed him to fire it as a weapon or to reach high places with ease. 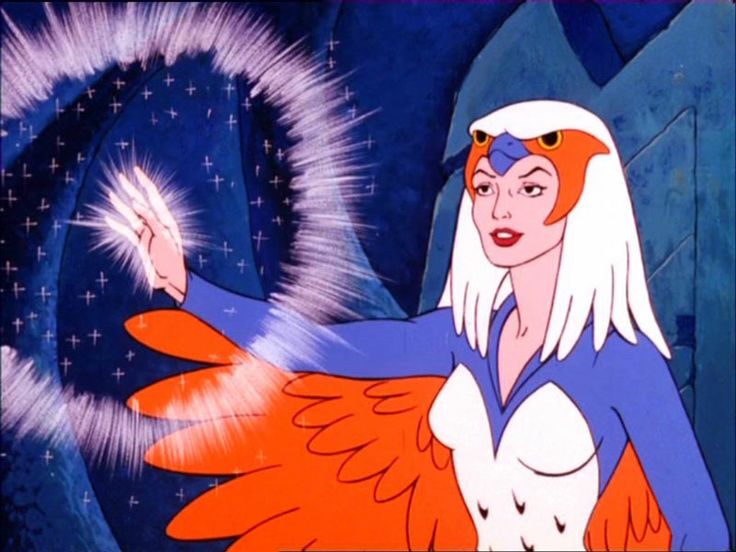 He-Man’s greatest ally, the Sorceress is the protector of Grayskull and the person who allows He-Man to have his magic powers to change from Adam to the defender of Eternia. The Sorceress could also transform into the bird of prey, Zoar. 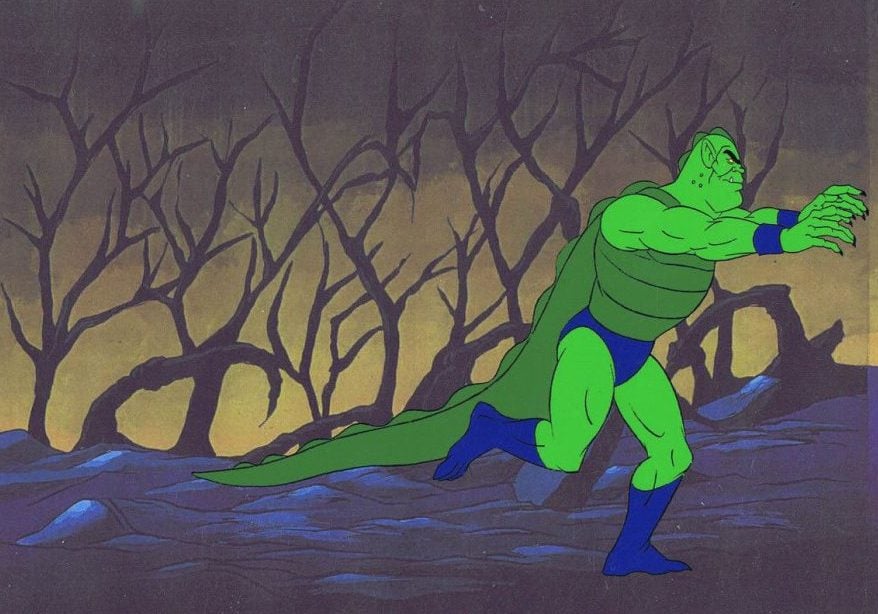 The Lizard-man Whiplash was able to use his tail to maximum effect as a vicious and powerful whip! 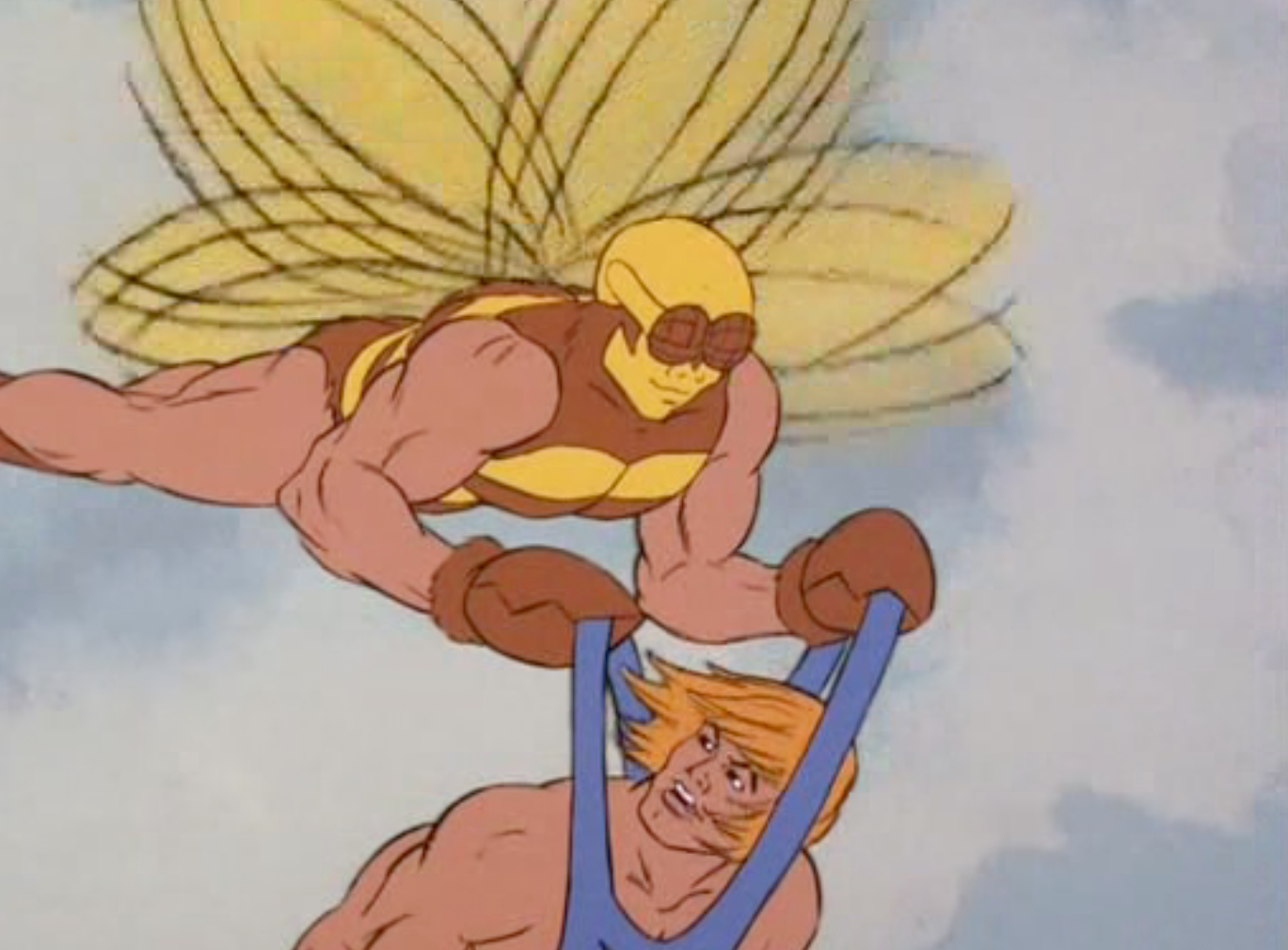 Another ally of He-Man’s, the half-human, half-bee Buzz-off was another of He-Man’s friends who had the power of flight so could be very useful in certain situations.

Which of these characters was your favourite? Why not share this article with a friend and see if they agree!