20 80s Cartoons You Loved But Had Completely Forgotten About

One image from a 1980s Saturday morning TV show can instantly take you back to your childhood.

With this in mind we’ve compiled a list of 20 cartoons that you may have forgotten ever watching. How many do you remember, and which was your favourite (if you can manage to pick just one)? 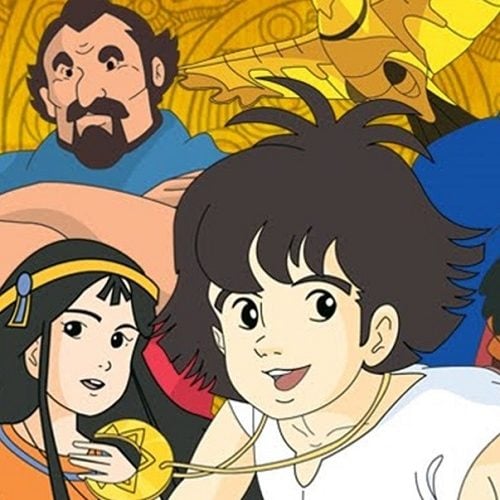 It’s hard to imagine the children of today getting excited about a story set against the early colonisation of America in the 16th century, but us 80s kids went crazy for The Mysterious Cities of Gold. It obviously didn’t hurt that the French-Japanese co-production had an unbelievably catchy theme tune.

Mysterious Cities of Gold centred on a young Spanish hero named Estaban, who – in search of his long-lost father – joins a band of explorers who head out to South America looking for the lost cities of the title. 39 episodes were made between 1982 and 1983, and the narrative was continued with a revival of the series in 2012, picking up where the original series left off.

If you were a pre-schooler in early 80s Britain, Willo the Wisp might very well have been the very first TV cartoon you ever saw. This oddball series of 5-minute stories centred on a colourful cast of creatures living in a mystical wood, with narration from the title character: a friendly embodiment of the ghostly will-o’-the-wisp of English folklore.

Kenneth Williams, master of arch-camp and veteran of the Carry On films, provided the narration and all the voices (the title character was even modelled on him). 26 episodes of Willo the Wisp were made in 1981, and the ‘toon was later revived in 2005 with James Dreyfus on vocal duties.

18. Adventures of the Gummi Bears

Remember this Disney series, which took its name from the ever-popular sweets? The characters on the show didn’t look like they were made almost entirely of sugar and gelatin, but Adventures of the Gummi Bears proved a tasty recipe, running for six seasons from 1985 to 1991.

Set against a medieval backdrop, the show centred on a friendly woodland community of walking, talking bears, who harvest the magical juice of gummi-berries, which gives them the ability to bounce. This came in handy in their clashes with the fearsome ogres and their dastardly human commander Duke Sigmund Igthorn.

Almost certainly the only Native American lead in an kid’s cartoon, interstellar wild west lawman Marshall BraveStarr was the title hero in what proved to be the last show produced by 80s animation giants Filmation (who had enjoyed earlier hits with He-Man and the Masters of the Universe and She-Ra: Princess of Power).

Set in the far future on the distant planet New Texas, BraveStarr fights to keep the peace alongside his cyborg horse Thirty/Thirty. The best part of any episode was when BraveStarr had to call upon his mystic animal powers: eyes of the hawk, ears of the wolf, strength of the bear and speed of the puma!

With only 26 episodes made, Ulysses 31 may have been short-lived, but it made a big impression. A loose retelling of Homer’s The Odyssey as a space opera, the show follows the adventures of 31st century adventurer Ulysses, as he and his crew bravely struggle to get back home to Earth.

It was a pretty bold concept for a kid’s show, blending classical mythology with sci-fi adventure, as Ulysses’ fate is shaped by the ancient Greek Gods themselves. But it was the show’s eye-popping designs and animation that really won over young viewers, especially their awesome spaceship, aptly named The Odyssey.

15. Heathcliff and the Catillac Cats

Ask any child of the 80s to name an animated TV show about a cat, and, well, they’ll probably either say Garfield or Top Cat. But after they think a little harder, odds are they’ll also remember Heathcliff, a less lethargic but equally unorthodox feline.

Heathcliff never had quite the same charm as Garfield, but we still had a blast with the misadventures of the mischievous moggy. Plus you got the added bonus of two stories featuring different characters in every episode, thanks to the inclusion of the Catillac Cats; a slightly hipper, more 80s variation on the streetwise Top Cat gang.

A production of cartoon pioneers Ruby-Spears in conjunction with Kenner Toys and DC Comics, hi-tech action adventure The Centurions centred on a trio of futuristic soldiers in awe-inspiring robo-suits which are both weapons and vehicles: one for air, one for land, one for water.

Essentially The Centurions was just a flashier, more Americanised variation on Thunderbirds (they even had a space satellite HQ), but we happily ate it up at the time. Plus with it being the 80s, the team’s heroic leader Max Ray also sported an impressive Magnum P.I. moustache. 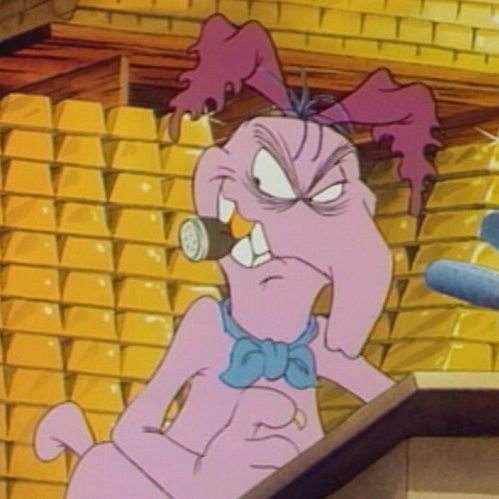 Long before every kid in the world knew who Rocket was, there was only one animated raccoon for us: Bert Raccoon, accident-prone hero of cartoon series The Raccoons. Running from 1985 to 1992, this Canadian cartoon pitted Bert and his friends against greedy industrialist aardvark Cyril Sneer.

The Raccoons was among the first kids’ shows of the time to present environmentalist messages amongst all the colourful fun. Its end credits also sported the unforgettably rousing song Run With Us, sung by Lisa Lougheed (who also voiced Lisa Raccoon).

12. Battle Of The Planets

Battle of the Planets was originally released in the 1970s, and was an American adaptation of the Japanese anime series Science Ninja Team Gatchaman. Our heroes, G-Force, fought to keep the Earth safe from the attacking alien forces commanded by the villainous Zoltar.

As many of us were very young when we saw Battle of the Planets, it may be surprising to learn the original Japanese show was, by western standards, considerably less kid-friendly. It was significantly re-cut for Western television to remove the more extreme violence, sexual content and other provocative elements.

Not every cartoon that was big with the kids in the 80s was an original product of that decade. Take Batfink, which was first broadcast all the way back in the 60s but didn’t really take off with young audiences until two decades later in reruns.

No prizes for guessing which well-known superhero this crime-fighting bat was an affectionate lampoon of. Still, as popular as Batfink was back then, it’s likely the show would prove controversial now thanks to the hero’s sidekick Karate, a culturally insensitive caricature of a Japanese man.

As the 1970s had given us TV classic The Six Million Dollar Man and its equally beloved spin-off The Bionic Woman, by the 80s every kid knew that ‘bionic’ was just a synonym for ‘awesome.’ So, if you could have a bionic man and woman, why not an entire family of bionic people?

That’s just what we got in Bionic Six, a US-Japan co-production which originally aired between 1987 and 1989. The electro-mechanically-enhanced sextet used their superpowers to fight crime, but also had to deal with the usual day-to-day strife of any family unit.

9. Defenders Of The Earth

Long before The Avengers took to screens, the biggest superhero team-up was Defenders of the Earth. Vintage comic book characters Flash Gordon, The Phantom, Mandrake the Magician and Lothar teamed up to battle Flash’s old adversary Ming the Merciless.

For those of us who grew up loving the 1980 Flash Gordon movie (which is surely all of us), this was the closest we ever got to a sequel! Joining the battle (and giving the show a bit more kid-appeal) are Flash’s son Rick Gordon, the Phantom’s daughter Jedda, Lothar’s son LJ, and Mandrake’s ward Kshin.

Launched in 1986, Galaxy High told the story of two earthlings – football star Doyle, and bookworm Amy – who are chosen to attend high school in outer space. Though well-liked, this sci-fi comedy surprisingly only ran for 13 episodes.

While Galaxy High isn’t the best-remembered cartoon of the 80s, it was created by a very notable Hollywood figure: Chris Columbus, writer of The Goonies and Gremlins, and later director of two Home Alone and Harry Potter movies.

Animator Bob Godfrey had already made a major impact on kids of the 70s with his colourful creations Roobarb and Custard – and he had a similar impact on 80s kids with Henry’s Cat. Light on plot with a simple animation style, it followed the trials and tribulations of that ‘mellow yellow feline.’

Charming audiences young and old alike (thanks to its overtones of adult-pleasing wit), the show was first screened on the BBC in 1983, and ran to five seasons in total. Since its initial run ended in 1993, Henry’s Cat has lived on in reruns.

6. Jayce And The Wheeled Warriors 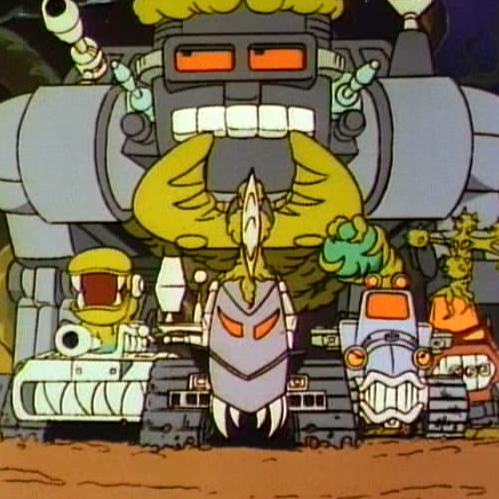 Sci-fi epic Jayce and the Wheeled Warriors centred on the Lightning League, human heroes commanded by plucky teen Jayce, who battle against the evil Monster Minds, vegetable-like mutations out to conquer the universe under the leadership of the evil Saw Boss.

Memorable for its awesome array of futuristic vehicles, the series sadly failed to gain much traction, and wound up being abruptly cancelled after 65 episodes. Its ongoing plot line was left unresolved, much to the frustration of the fanbase the show eventually built up.

5. Jimbo And The Jet-Set

Jimbo and the Jet-Set was a Children’s BBC production which ran for 25 episodes between 1986 and 1987. Not unlike Thomas the Tank Engine, the series recognised the inherit appeal of anthropomorphic vehicles to younger viewers.

The show was set at a fictitious London airport, and featured an array of sentient airport vehicles, as well as a rather irate air traffic controller; who can forget his anguished cries of “JIMB-OHH!” every episode?

Created by late children’s book author David McKee, King Rollo was an endearingly simple show in which the King of the title (a grown man, but rather childlike in nature) does his best to perform his regal duties with the assistance of his friends.

McKee was also the creator of earlier animated series Mr Benn, with which King Rollo shares a lot of common ground. As well as being animated in a very similar style to McKee’s early 70s show, King Rollo also featured the vocal stylings of Mr Benn narrator Ray Brooks.

Pigeon Street is another 80s cartoon that made a big impression on kids in Britain at the time. The show featured the adventures of a group of residents living on Pigeon Street, which consisted of flats and terraced houses located in an undisclosed British city.

The street was also home to several pigeons (hence the name), although they were rarely an integral part of the plot. We recall being more enamoured with the human characters, particularly lorry driver Long Distance Clara!

2. Spider-Man And His Amazing Friends

For those of us who grew up in a world without a slew of blockbuster movies featuring Marvel’s beloved wall-crawling hero, this cartoon series was our introduction to the friendly neighbourhood Spider-Man. Produced from 1981 to 1983, Spider-Man and his Amazing Friends ran for 24 episodes between 1981 and 1983.

The show united Spidey with the X-Men’s Iceman, plus an original character called Firestar, and their adventures often saw them team up with other Marvel characters including Captain America, Thor and the X-Men. For many of us, this helped sow the seeds for a Marvel obsession which endures to this day!

1. Visionaries: Knights Of The Magical Light

Visionaries: Knights Of The Magical Light was based on the Hasbro toy line, whose main distinguishing feature were the holograms on the breastplates of the heroic knights. In reality these were never as cool as in the show, in which magical creatures literally leaped from the heroes’ chests.

The story was set on a fictional planet named Prysmos, inhabited by a futuristic society whose technology suddenly ceases to function, forcing its citizens to rely on ancient magic to survive. Sadly, Visionaries never really took off and was axed after 13 episodes, although it still won plenty of admirers in that time.