20 Beach Snapshots That Will Make You Doubt Your Seaside Holiday

If you want to have a relaxing and stress-free day, then heading to the beach is one of the best things you can do. Aside from errant seagulls or over-priced ice-cream, there’s basically nothing to surprise you or ruin your day, making it the perfect place to catch up on some rest.

At least, that’s what the people on this list thought. Unfortunately for them, they were faced with some surprises when they got to the seaside, from the hilarious to the uncomfortable to the completely baffling. Here are 20 beach snapshots that will make you think twice about your beach holiday!

Car commercials are always super abstract and obscure, but they’re usually at least pretty well thought-out. However, the marketing director who commissioned this car advert on the beach probably wished they’d thought about it a little bit more.

The reason why is simple: the tide came in as the car was attempting to drive down the beach, and they soon had a completely useless car and a very damp actor to fill in expenses forms for. Whoops. 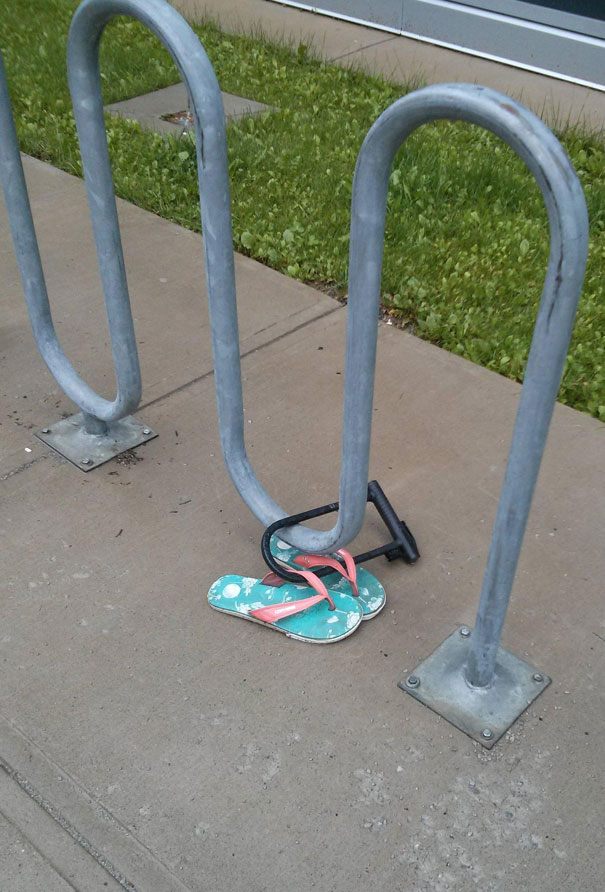 The question of what you do with your clothes and shoes when you go to the beach is one that has been around for as long as beach holidays have. This is a pretty ingenious solution to that problem, even if it means you have to take a key into the ocean with you.

What if you lose the key? Do you just have to abandon your sandals forever? In that case it would make more sense to take your chances leaving them on the beach. 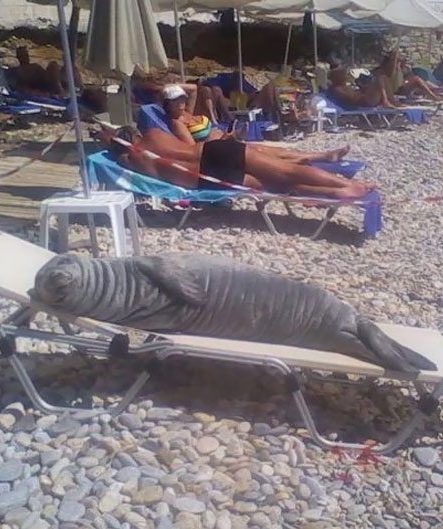 There’s nothing worse than when you hire out a sunbed for the day while on holiday, then come back from a dip in the sea to find that someone has taken it for themselves. However, if you returned from a swim to find a seal lounging in your chair, then you’d probably just have to deal with it.

The good news is, this seal is a regular on the beach, and so locals have started leaving out a chair for it. Her name is Argiro, which means silvery in Greek, and she comes up for a nap and to have her picture taken pretty much every day. 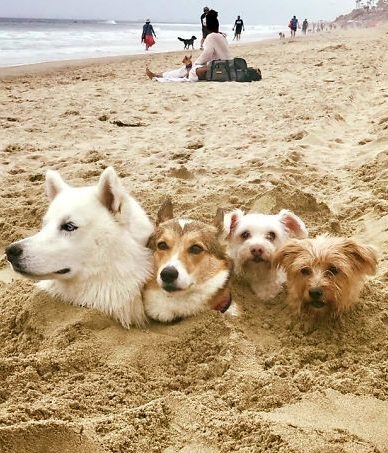 Not all beaches allow animals to run and play alongside humans, but the ones that do are obviously superior. The problem is, taking a dog to the beach can be kind of hectic and unpredictable, especially if they’re young and excitable.

That makes this family’s decision to bring all four of their dogs baffling – until you realise that they’re patient enough to sit and be buried side by side in exchange for a treat. 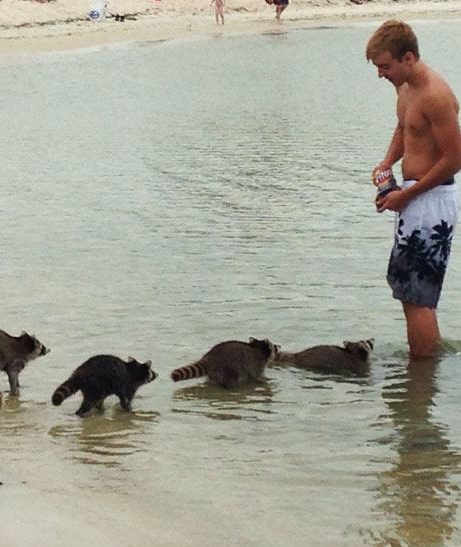 There are some animals you expect to see by the beach, and some that you just don’t. Seagulls, for example, are a given – and seeing a dog or two paddling in the water is nothing to raise an eyebrow at.

Even seeing donkeys giving rides to kids along the sand is pretty easy to understand, but there’s a pretty hard line to be drawn at raccoons. Why are they there? Why are they swimming? Why are they attracted to the crisps?

15. This sofa built by sand 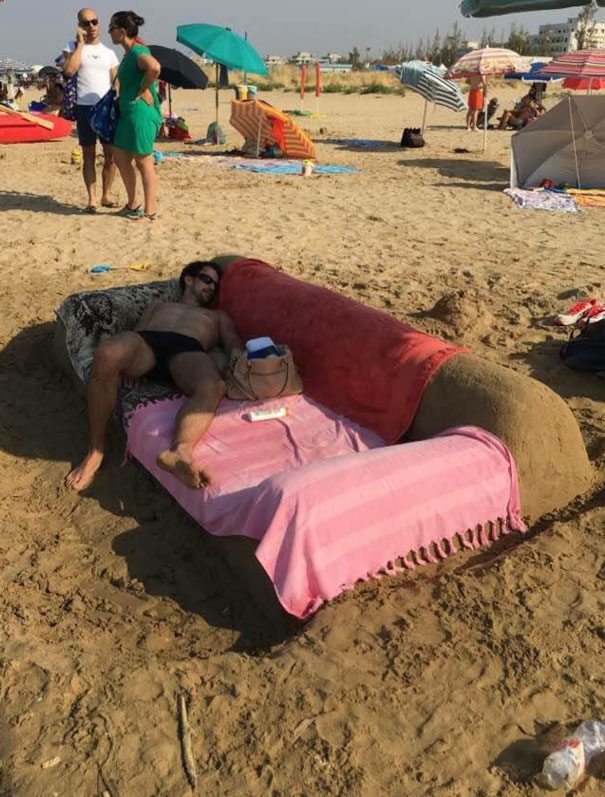 Building sandcastles is a fun beach-side activity for around ten minutes – after that, it gets very dull very quickly. Very few people have the patience to build a sandcastle as ambitious as they’re imagining at the start of their beach day, and even fewer people finish what they’re working on.

That only makes this dude’s commitment to building a lifesize couch out of sand even more impressive – especially since he had to put in a ton of work just to get to relax.

14. This door with no building attached 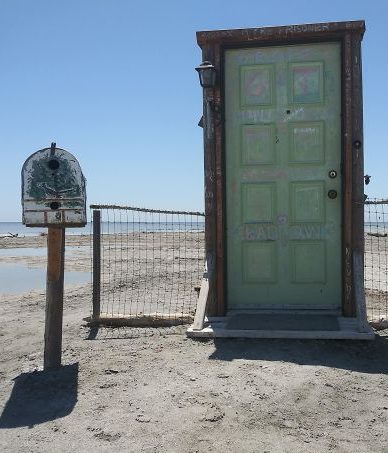 This is another weirdly obscure thing to find while on a seaside holiday, and it also feels vaguely like the beginning of a horror story. It’s easy to imagine all sorts of creepy scenarios that could happen if you venture through the door, and harder to imagine an innocent reason for it being there.

Weirdly, the worst thing about this is actually the mailbox, which just adds a whole other level of odd to this already bizarre situation. 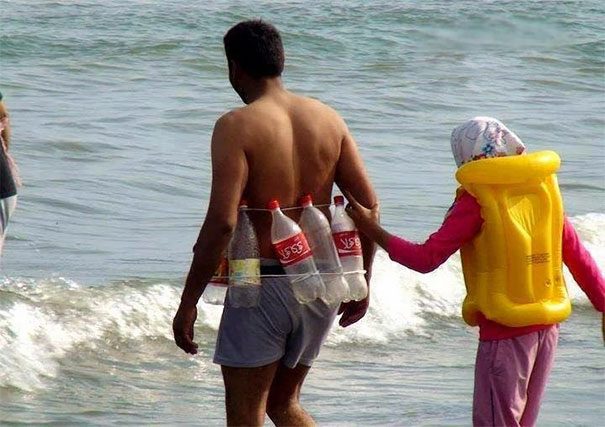 The phrase “there are two kinds of people” comes up a lot in internet culture, but there are very few examples better than this one. I’m not sure why one of them has access to a proper life jacket and the other one doesn’t – maybe the store just ran out? Or this guy just really wanted to see if this wacky idea would actually work. 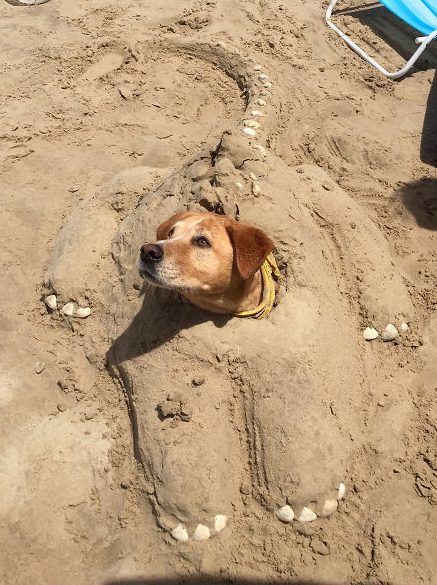 If you’re at home in a calm and controlled environment, you can use treats to make your dog do tricks or obey commands for a pretty unlimited amount of time. However, in a place as exciting and overwhelming for dogs as the beach is, it’s harder to make any command stick for more than a couple of minutes.

This means either this dog genuinely loves being buried in sand, or it’s just one of the most patient puppies in existence, since this hilarious sand sculpture probably took a long time to do. Either that, or the dog was just staring at an ice-cream a little way off, and was waiting for the right moment to strike. 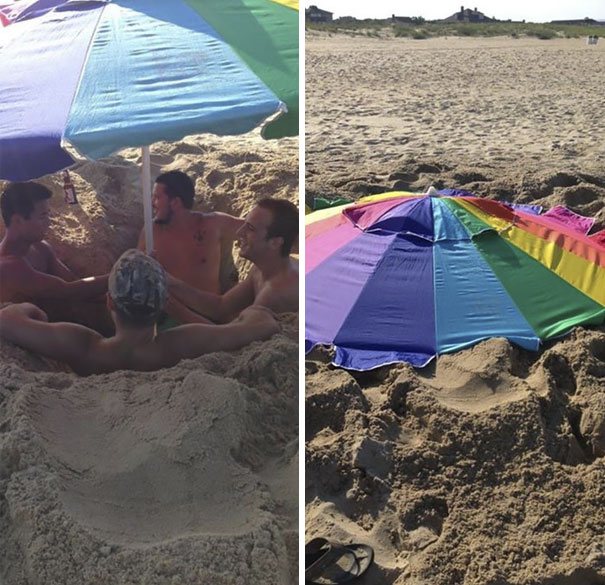 As fun a place to hang out as the beach is, it can be hard to get any sort of privacy. In the best case scenario, people will stare at you while you sunbathe, and in the worst case they’ll scope out where you hide your valuables so they can steal them while you swim.

Either way, this is a pretty awesome and hilarious solution, and it only takes a few minutes of digging to set up. With that said, if the tide came in quickly it could get pretty dangerous, and hoisting yourself out seems like it could get tricky. 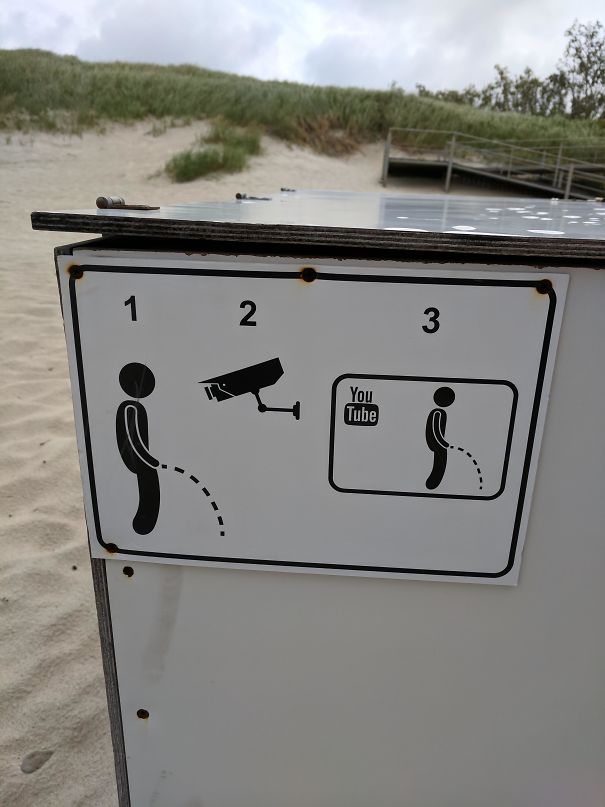 The beach might be a laidback and fun place to hang out, but that doesn’t mean there aren’t any rules. For this beach in particular though, it feels like the rules are both specific and totally brutal.

It’s pretty clear what the sign means, but just in case you’re struggling to decode it for some reason, it says there’s no peeing on the beach. Not only that, but if you do it then security cameras will pick it up, and then they will put those videos on YouTube without hesitation. 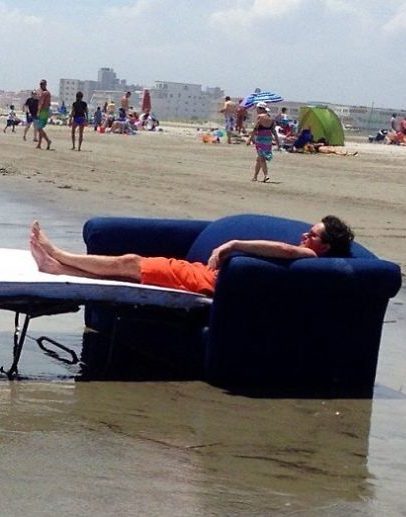 As relaxing as the beach is supposed to be, it can also be pretty gross at times. Sand gets everywhere, it’s damp and cold, and it can be hard to get comfy on a thin towel if you want to eat a snack or read a book. That’s totally understandable, but it feels like this guy’s plan of hauling a full recliner on to the beach is not the best solution. 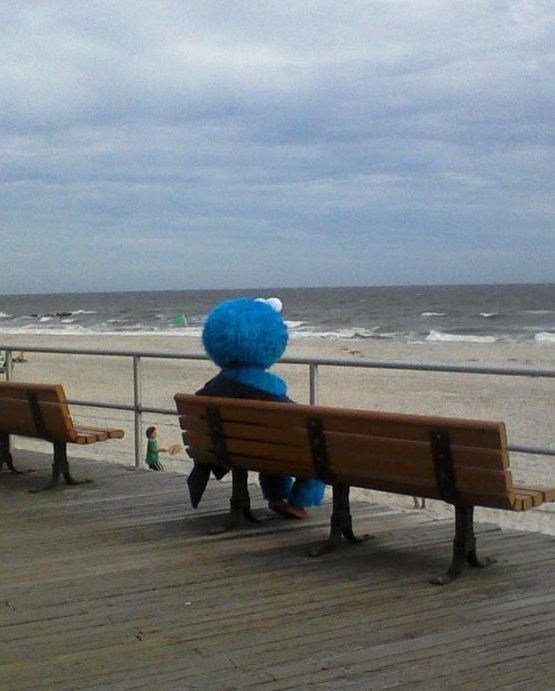 As far as uncomfortable situations go, it’s hard to imagine anything worse than being at the beach on a hot day, in a warm, heavy and scratchy cookie monster costume. With that said, this guy must have had a solid reason to spend a whole day like that.

It seems like the most obvious answer would be to say that he’s at work, but if that’s the case then why would he just be sitting and staring into space? No, instead you have to conclude that this guy just owns this costume, and he decided it was just a cookie monster kind of day.

7. How to freak out everyone on the beach 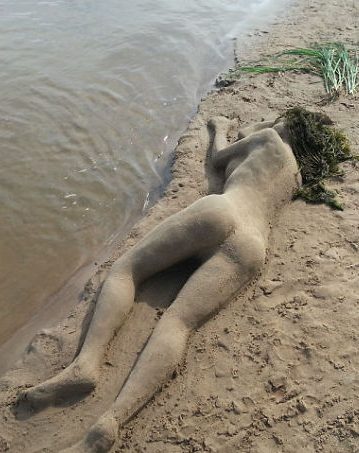 There’s always at least one professional sand sculptor who shows up at the beach to make a little money, and show up everyone’s amateur attempts at sand castles in the process. With that said, whichever sculptor decided this particular image was the way to go has a seriously dark sense of humour. 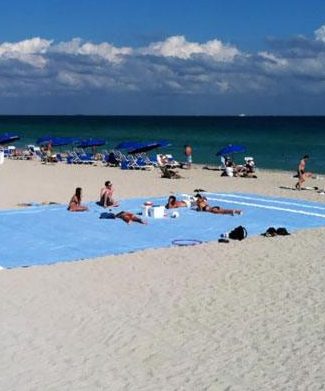 Every time you go to the beach as a group, there’s always that one friend who doesn’t bring a towel, and they always try to squeeze on to the corner of yours. It’s a super not-fun situation, but one that can be fixed with a pedantic solution like this one.

I’ve no idea where you’re supposed to buy a giant towel like this one, how you fold it out without the corners blowing away, or even if most beaches allow this – but it definitely looks like it would make an average beach day immediately way more fun. 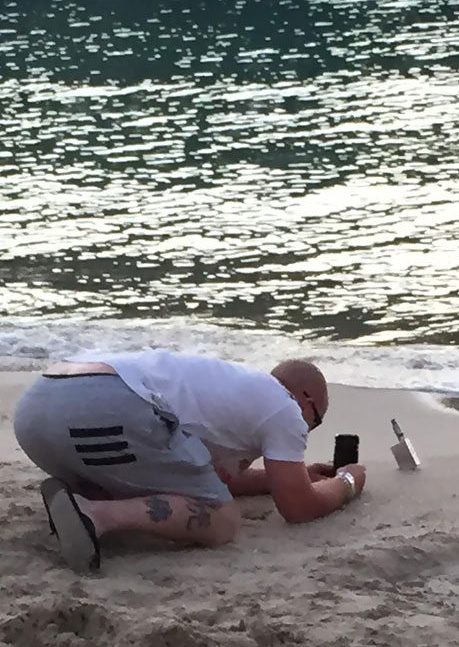 When you go to the beach, you take pictures of the people you care about, that’s just a law of nature. Whether you’re taking group shots with your friends, adorable ice-cream pictures with your family, or seaside sunset pictures with the love of your life – you tend to immortalise the moment. This guy… took a picture of his vape. Try not to think about that too much. 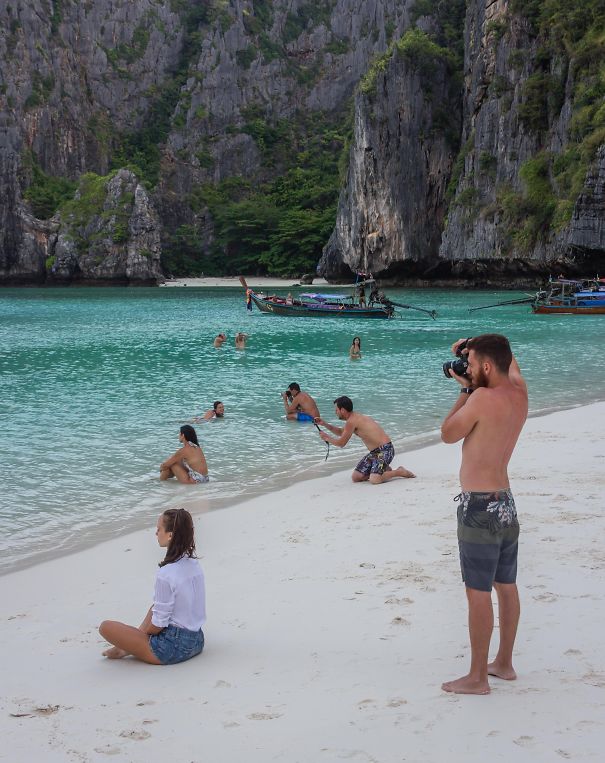 Speaking of taking pictures – most of the time you might be doing it to capture a memory or send a postcard back home, but nowadays there’s another important reason why you might whip out your phone.

Whether it’s for your blog, your fitness Instagram account, or just to make everyone else on Facebook jealous – it’s important to take holiday pictures to make sure everybody knows your on vacation, and for that you need an instagram boyfriend.

3. This determined (but confused) bird 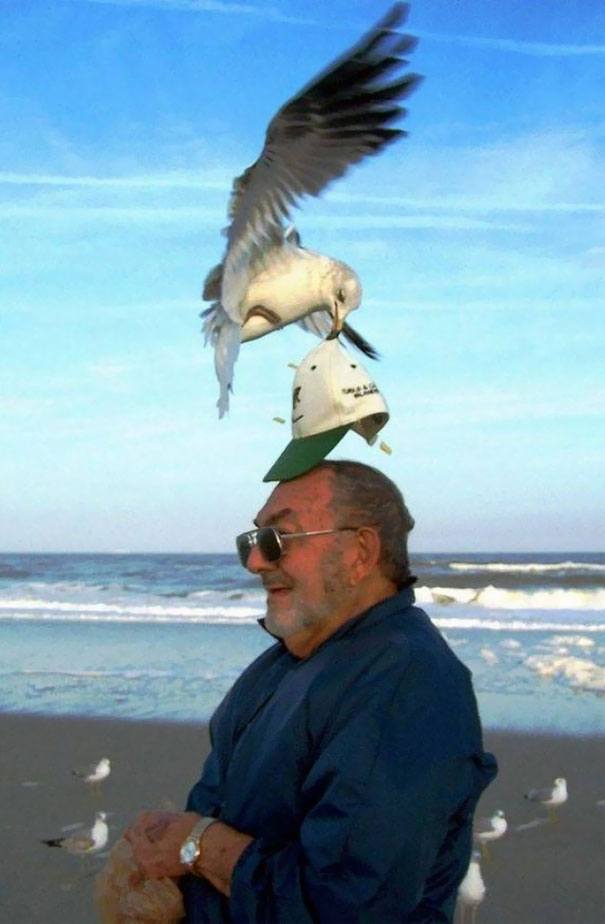 There’s a whole genre of viral internet content called “seagull swoops down and eats somebody’s food unexpectedly”, so pictures of that nature aren’t exactly new. With that said, the subsection of “seagull gets confused and thinks a hat is a snack” is way more niche, and also way more hilarious. 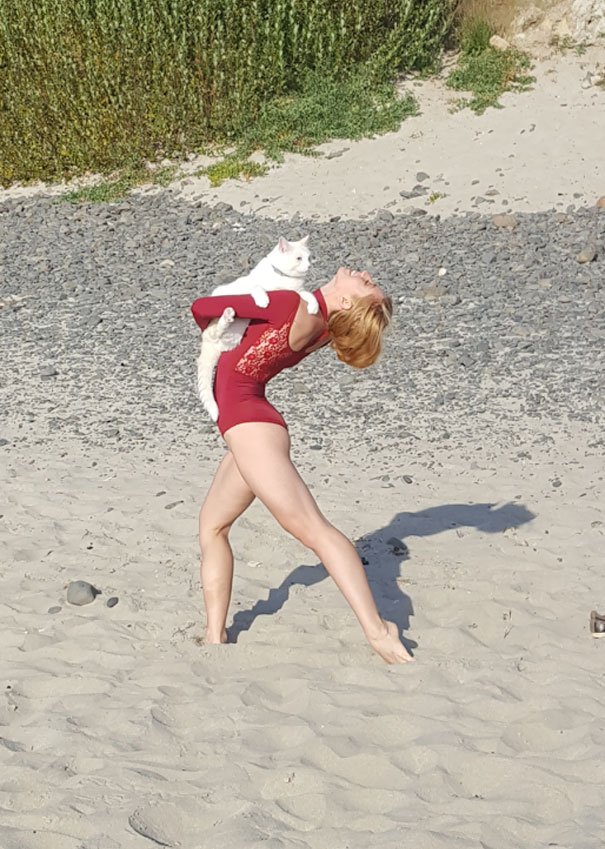 Most of the pictures on this list are unusual in one specific way, but this picture surpasses that by being strange in two separate ways. First of all: why is this woman doing ballet on the beach in a leotard. Then: why do they have a cat?

The story behind this iconic image is that a dancer was having promo shots taken on the beach, and another person just happened to bring their pet along. The cat got interested in what on Earth the dancer was doing, and the rest was history. 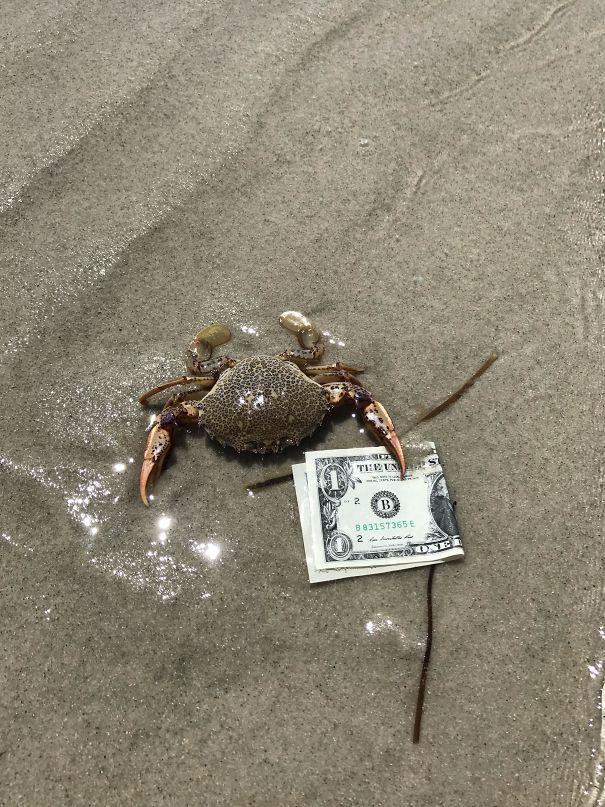 So, there’s a high possibility that this image is staged, and someone just came across a crab and gave it a dollar to be funny. The alternative is that this crab is on their way to the bank, and was just annoyed to be stopped for a picture. I’m choosing to believe the latter.