18 Things You Probably Didn’t Know About The Goonies!

The Goonies, one of the greatest films of a generation and certainly one of the best kids’ fantasy films ever made. The story of a group of unpopular kids who are being forced out of their homes and go on an adventure together in the hope of finding One-eyed Willie’s (yes, really!) treasure in the hope of saving their homes.

1. Sean Astin was allowed to keep the treasure map!

Sean Astin (Mikey) got to keep the treasure map that started the adventure, but his mum found it, thought it was a tattered piece of paper and through it in the bin!

At one point, rocks are falling from the ceiling and Data is heard to say “Holy S-H-I-T” – this is because the actor who played Data, Jonathan Ke Quan, promised his mum he wouldn’t use any bad language in the film!

When the Fratelli brothers argue, and Mama Fratelli slaps them, the actress Anne Ramsey was told to use as much force as she could… she did!

The Pirate Ship belonging to One-eyed Willy was built in its entirety, and was a real physical ship, not effects or sets. The ship was offered to anyone who wanted it when filming finished, but no-one claimed it and the ship was scrapped!

5. The cast weren’t shown the ship before filming. 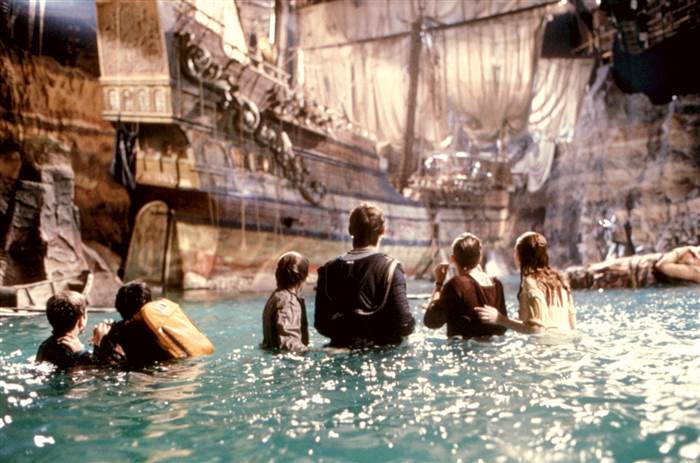 To get genuine reactions, the child actors weren’t shown the ship that had been built before they filmed the scenes. Josh Brolin was so taken aback he proclaimed “Holy Shit” and the scene had to be re-shot!

Richard Donner who directed the film kept a couple of items from the production. He kept One-eyed Willy’s head and a model of the ship.

In the scenes where Robert Davi’s character sings to Sloth to upset him, it was Robert Davi himself who came up with this idea as he is a trained opera singer.

8. Jeff Cohen thought of his mum dying to cry!

In the confession scene, Jeff Cohen who plays Chunk thought about his mum dying to make himself cry so that it looked as realistic as possible!

One-eyed Willy’s skull was made using real bones! That’s just a little bit creepy and too real for our liking!

The make-up to create the character Sloth took five hours to apply and the lower eye was moved mechanically by remote control, and it was essential he didn’t get wet – on one day when he did it put filming back by a day!

Corey Haim auditioned for the part of Mouth, which was ultimately given instead to Corey Feldman. The two would go on to star together in another Richard Donner film, The Lost Boys.

12. The actors got to see Michael Jackson

As a special treat, Steven Spielberg and Richard Donner sent the actors to see Michael Jackson’s Victory concert at the Dodgers Stadium. 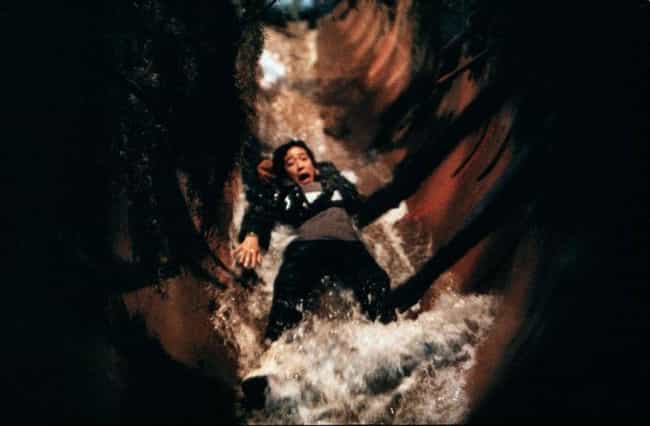 There was a lot of water used in the filming of The Goonies – over 900,000 gallons! That would fill more than a few bathtubs!

14. There was no oil in Data’s Slick Shoes

In the scene where Data uses his “Slick Shoes” to lace the log with oil to ensure the evil Fratellis can’t follow them, the “oil” was actually glycerin, water and food colouring!

15. There is a nod to another Spielberg film (did you hear it?)

In the scene where Chunk calls the police, the police officer is naturally skeptical and asks Chunk if this is like the time there were creatures that multiply when you throw water on them! This is a very clear nod to another film that Spielberg also produced, Gremlins!

16. There is also a nod to another Richard Donner film

In the scene when Sloth rips off his shirt to reveal a Superman top, along with a few bars from the famous Superman theme tune, this was a clear nod to the fact that Richard Donner also directed the first Superman film starring Christopher Reeve and parts of Superman II.

17. There is a Goonies Lego Level

In 2017’s Lego Dimensions, they released a level based on The Goonies, with Excalibur Batman telling the story and trying to give Sloth a Bat Suit to wear (he’s obviously jealous that he’s a Superman fan!) and then Chunk and Sloth go off in to the caves in search of the other Goonies to try and rescue them from the evil Fratellis!

18. Richard Donner appears in the film

At the end of the film when there are a couple of police officers on quad bikes, the grey haired one is played by none other than Richard Donner, the film’s director.

Did you know these facts already? Do you know any amazing Goonies facts that we have missed out? Let us know your thoughts in the comments as always!