Hand-in-hand with the Bill & Ted movies, Wayne’s World had a major impact not only on the face of comedy, but also on the way people spoke in the early 90s. After seeing the Saturday Night Live characters on the big screen, no one could stop themselves from enthusiastically declaring everything to be “Excellent!” and advising friends to “party on!”

Happily, Wayne’s World also holds up well to this day – but did you know the following facts about the movie?

10. Mike Myers insisted on using Bohemian Rhapsody – and Queen thanked him for it

There was some debate behind the scenes about the famous, early moment in Wayne’s World in which the characters sing along to Queen’s Bohemian Rhapsody in the car. Mike Myers has said on a number of occasions that he would have left the film entirely had they not been allowed to use the song.

As it turned out, Wayne’s World hit cinemas in February 1992, only three months after Queen frontman Freddie Mercury passed away. Myers and company received a thank you note from the surviving members of Queen for using the song, and years later Myers landed a cameo in the band’s 2018 biopic, also entitled Bohemian Rhapsody.

9. A lot of the dialogue was improvised 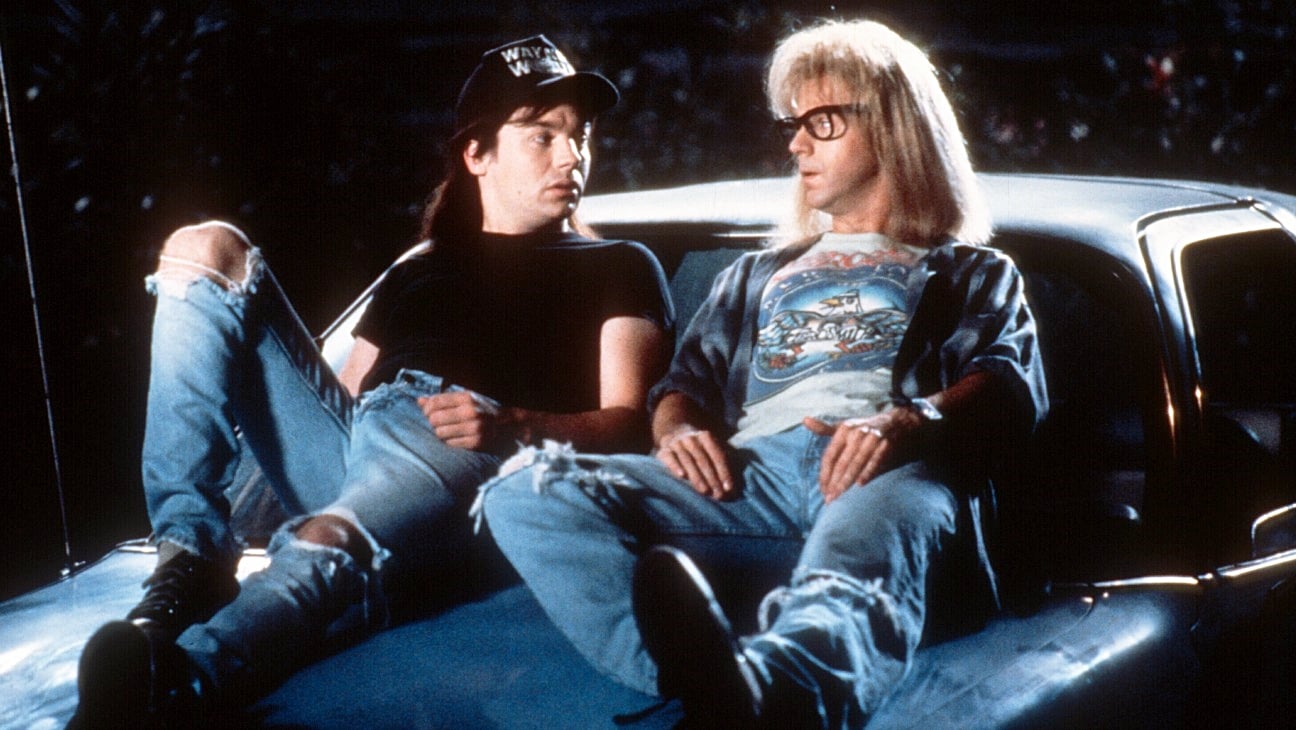 Mike Myers and Dana Carvey originated the characters of Wayne and Garth on TV’s Saturday Night Live, where they honed their skills in coming up with great comedy lines on the fly. Like a lot of comedians, the duo felt they did a lot of their best work under such conditions, so they made a point of ad-libbing a lot on set.

Many of the film’s best lines were improvised, such as when Garth asks Wayne, “Did you ever find Bugs Bunny attractive when he put on a dress and played a girl bunny?” Myers’ hysterical laughter after this question was not entirely acting, and the ad-lib amused everyone so much they kept it in the film. 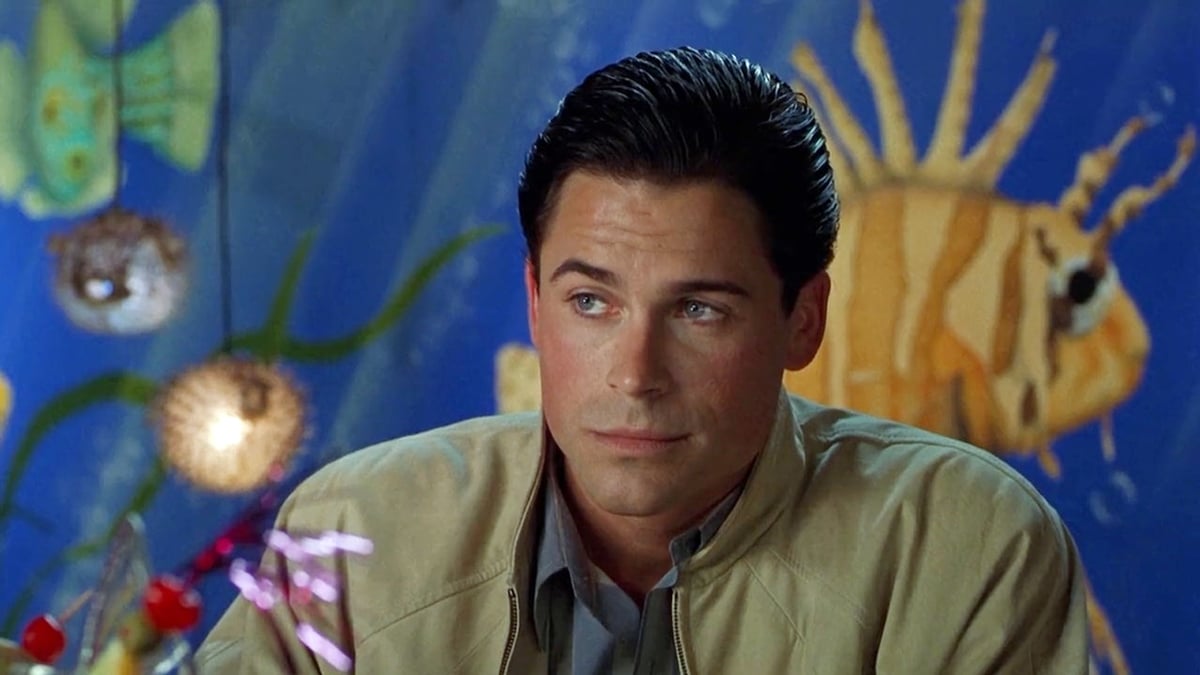 A decade before Wayne’s World was released, Rob Lowe was among the hottest young stars of his generation. The actor enjoyed success with such films as The Outsiders, St. Elmo’s Fire and About Last Night, but in 1988 his career was seriously derailed when a sex tape featuring the actor was released.

Saturday Night Live’ producer Lorne Michaels told Wayne’s World director Penelope Spheeris that she could hire Rob Lowe “really cheap, because he can’t get a job” after the scandal. The role helped Lowe get back on track, and also started a long professional relationship with Mike Myers: Lowe would go on to make appearances in the Austin Powers movies, and more recently Myers’ Netflix series The Pentaverate.

7. Dana Carvey really is that good at playing the drums

One of the most surprising moments in Wayne’s World comes in the music store scene, when the generally goofy and ineffectual Garth sits down at a drum kit, starts to tap the drums – and suddenly bursts into a remarkable, technically proficient drum solo. This is all done in one shot, which may leave viewers wondering how they did it.

The answer is very simple: it was done for real, as actor Dana Carvey really is that good a drummer. Carvey had previously gotten the opportunity to show off his drumming prowess on an episode of Saturday Night Live, in which Wayne and Garth played alongside legendary rock group Aerosmith. 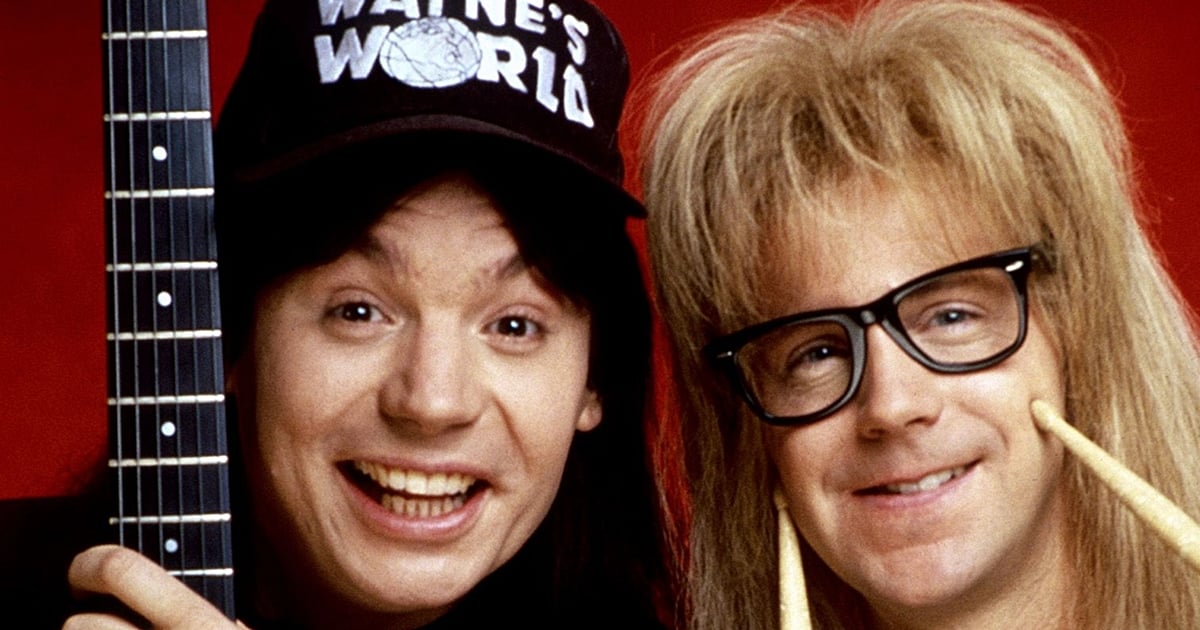 Mike Myers and Dana Carvey have always had an awkward working relationship. Even back on SNL, all the Wayne’s World sketches were written by Myers alone, and the comedians didn’t consider themselves a double act. When it came time for the movie, Myers’ initial draft of the script centred almost exclusively on Wayne with very little Garth, which Carvey found “a little strange.”

When Myers disregarded Carvey’s suggestions about his role in the film, Carvey quit the film three weeks before the shoot began. Eventually he was lured back after being promised a more substantial part, but the two had a strained relationship throughout production. After Wayne’s World 2, Carvey and Myers would not speak for many years, although they have since made peace.

5. Myers didn’t get along with director Penelope Spheeris 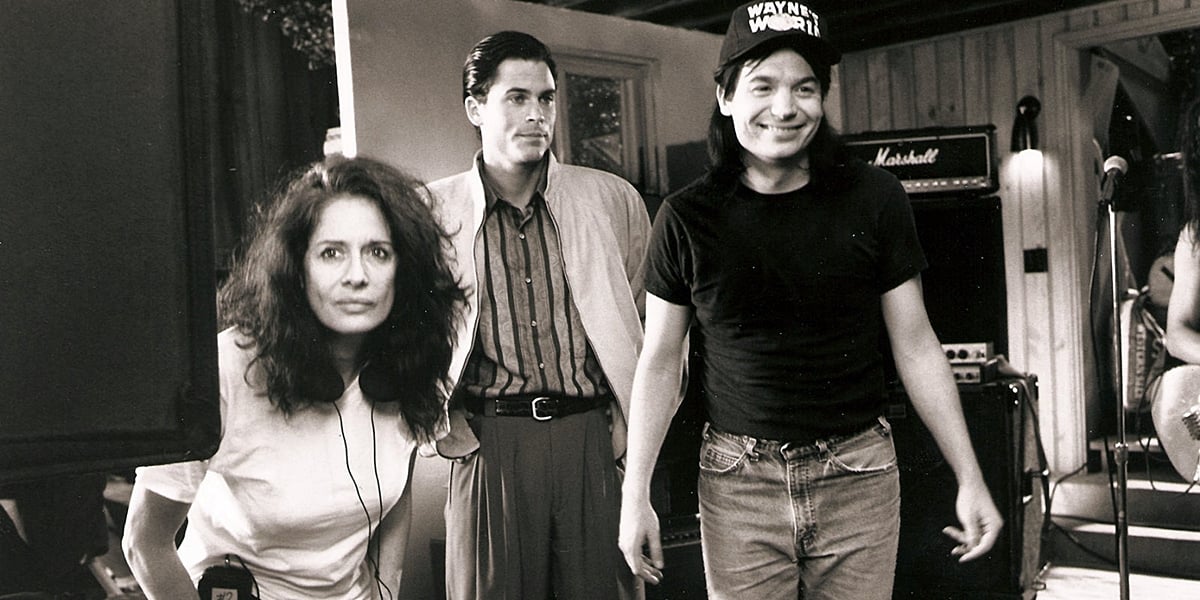 It wasn’t only Dana Carvey that struggled to get along with Mike Myers during the Wayne’s World shoot. The actor and screenwriter, notorious for being a bit of a control freak, also butted heads with director Penelope Spheeris. Reportedly he didn’t have confidence in the director’s ability, and would question her decisions.

For this reason, Myers insisted that Spheeris not be invited back for Wayne’s World 2, which would instead be directed by Stephen Surjik. However, in the years since Spheeris has denied that she and Myers had a problem on the set, insisting, “When we were shooting Wayne’s World, there really were no clashes with the actors.”

4. They really were denied permission to play Stairway to Heaven

A famous moment in the music store scene sees Wayne try out a guitar only for the store assistant to point out a sign that reads ‘No Stairway to Heaven.’ This was a joke in reference to the fact that many guitar stores really did make this a rule from the 70s onwards, as the Led Zeppelin song was played by aspiring guitarists so often.

This wasn’t entirely a gag, however. At the time, Led Zeppelin were notoriously stingy with the rights to their music, and the filmmakers were told they would have to pay $100,000 if they played so much as four notes of Stairway to Heaven. For this reason, the moment Myers starts playing the song had to be very carefully edited to ensure no more than three recognisable notes were used.

3. It made its budget back in its first week

Wayne’s World cost $14 million to make. While this may be a small sum by Hollywood standards, the movie still rested on the star power of Mike Myers and Dana Carvey who, while popular with Saturday Night Live viewers, were by no means a guaranteed box office draw at the time.

Happily for the filmmakers, Wayne’s World made $18 million in its first week alone. By the end of its global theatrical run, the film had earned more than ten times that figure, its final box office takings coming to $183.1 million. This, of course, rendered Wayne’s World a certified hit, and it went on to do even more business on home entertainment.

Such was the success of Wayne’s World, a sequel was rushed into development immediately. Wayne’s World 2 had a somewhat troubled production, with script issues forcing a complete rewrite mere weeks before the shoot began. It was released December 1993, only 20 months after the first film.

1. It inspired a rollercoaster

Like many successful film franchises, the Wayne’s World has inspired spin-offs in different media. This varied from the more obvious items like soundtrack CDs (which sold well) and a Super Nintendo video game (which didn’t). However, there was another, perhaps more surprising Wayne’s World offshoot: a theme park ride.

The official Wayne’s World rollercoaster, the Hurler (named after Wayne and Garth’s slang term for vomiting), was opened at two venues in 1994: Carowinds amusement park in Charlotte, North Carolina, and Kings Dominion in Virginia. The Kings Dominion Hurler was discontinued in 2015, but the Carowinds Hurler is still there, although it was rebranded Twisted Timbers in 2018.