One of the most popular bands of all time, Queen have sold upwards of 170 million records around the world. They’ve broken Guinness World Records, been inducted into the Rock and Roll Hall of Fame and now even have a billion-dollar film biopic detailing their rise to fame. On top of this, the band’s hit single Bohemian Rhapsody has been voted the best song of all time in various different polls.

Still going strong since their inception in 1970, the band has been through a lot – including the tragic death of frontman Freddie Mercury in 1991 – but they’re still as popular as ever. Here are 15 fascinating facts about this iconic group.

15. Brian May and Roger Taylor were originally in a different band together 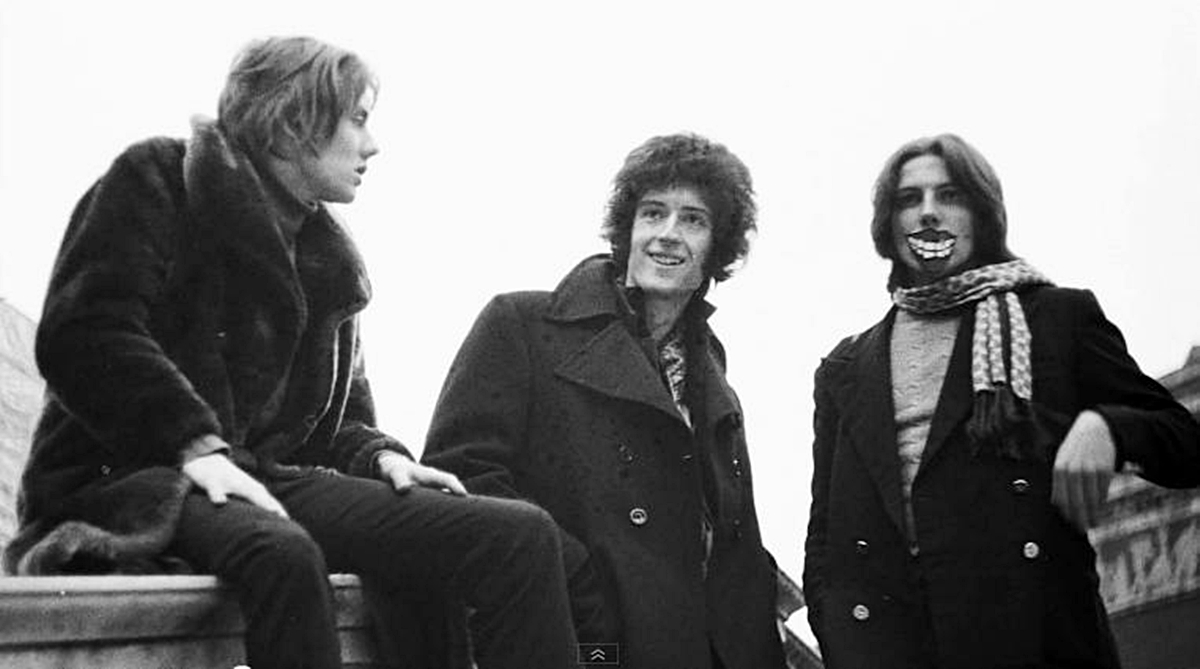 Before the formation of Queen, Brian May and Roger Taylor were already members of a band called Smile, along with lead singer and bassist Tim Staffell. Staffell introduced his friend from Ealing Art College, Farrokh Bulsara, to the group in the late 60s.

When Staffell left due to creative differences in 1970, May and Taylor were happy to invite Bulsara into the band as a replacement lead singer and recruited Mike Grose as a bassist. The four played their first gig in June that year – under the name ‘Queen,’ which was suggested by Bulsara. Around the same time Bulsara decided to change his surname to ‘Mercury.’

14. Brian May is a PhD-level astrophysicist 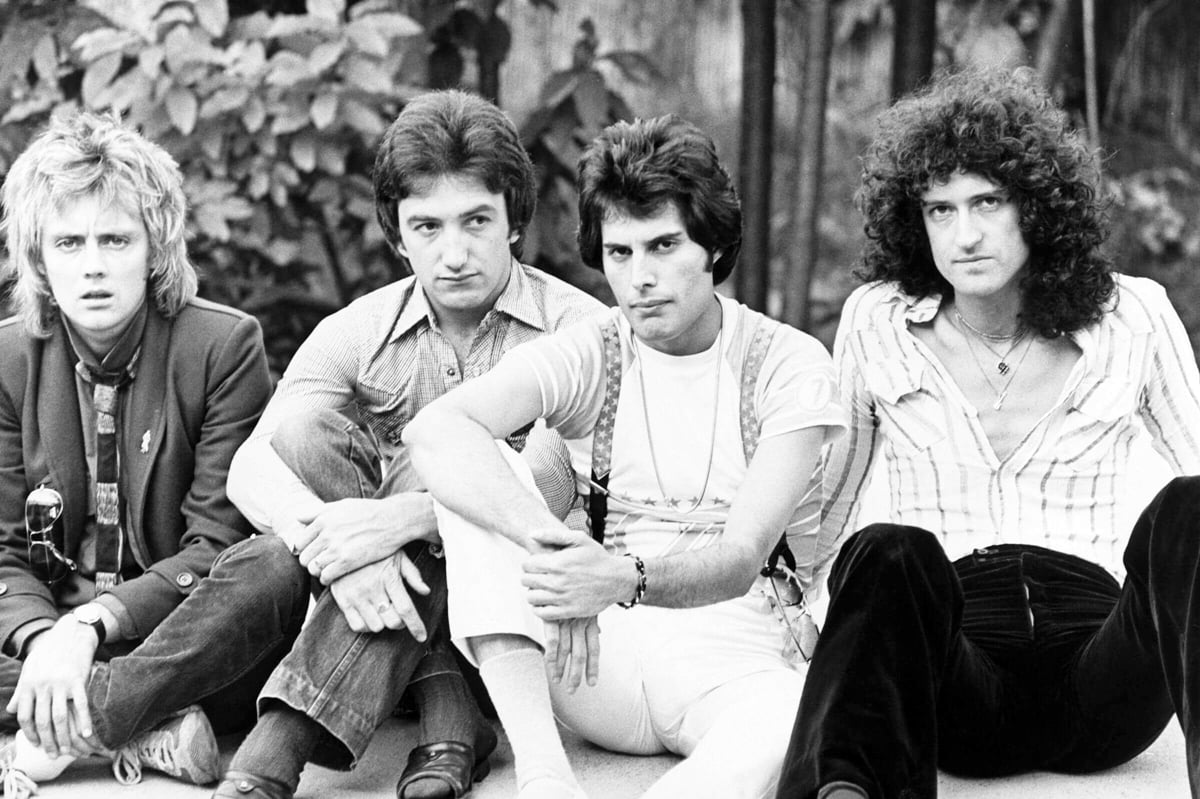 Between the original members of Queen, the band has some serious brains. Roger Taylor was training to become a dentist before joining the band; bassist John Deacon is a trained electrical engineer (something which appealed to the band when they recruited him); and Brian May is a PhD-level astrophysicist.

May in particular has excelled in the astrophysics world – he collaborated with NASA on their New Horizons Pluto mission; co-founded Asteroid Day along with Stephen Hawking and Brian Cox in 2014; and even has an asteroid (Asteroid 52665 Brian May) named after him. 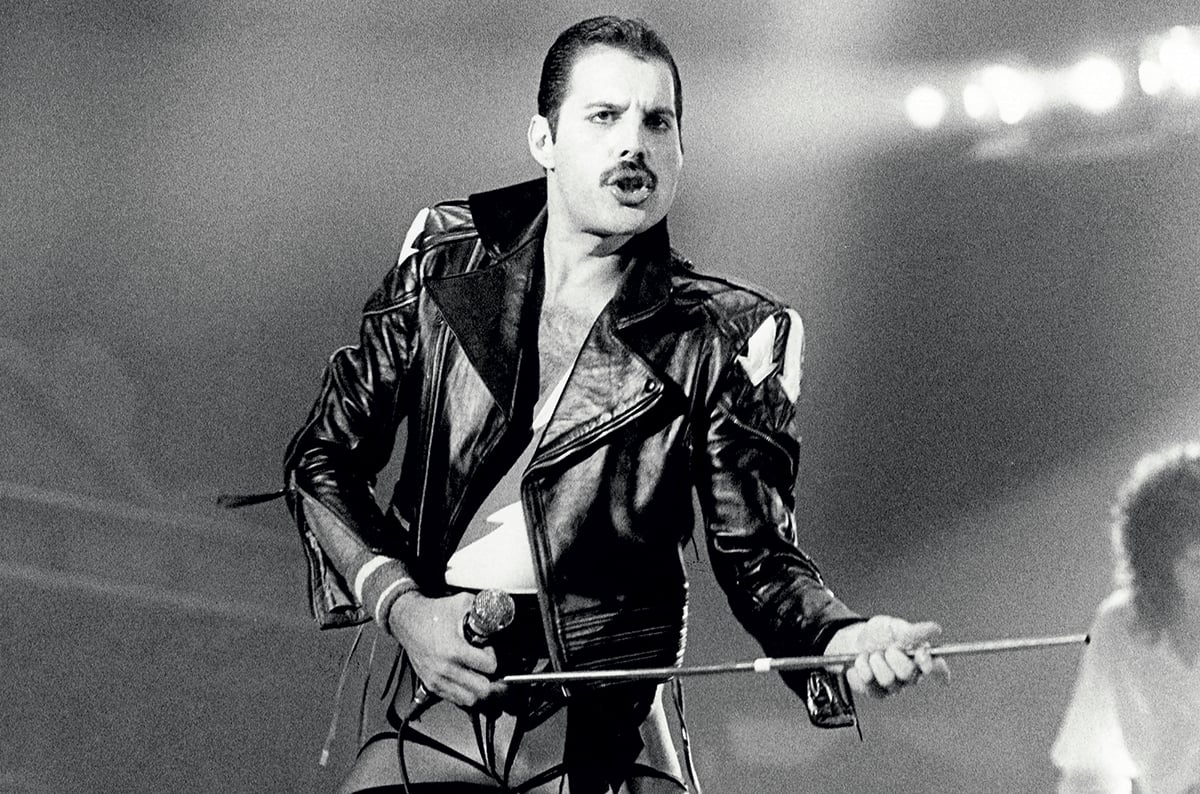 Freddie Mercury’s ‘bottomless mic’ was one of the singer’s more memorable trademarks, along with his all-white outfits and chevron moustache. But it almost never was – in fact, the ‘detached’ look only came about by total chance.

In one of Queen’s early shows, Mercury’s microphone stand broke – but instead of finding a new one, he held the stand containing the microphone and kept singing. The mic stand acted as a great prop for Mercury onstage – he often used it as an air guitar, or else just swung it around for extra drama.

12. Brian May made his guitar by hand 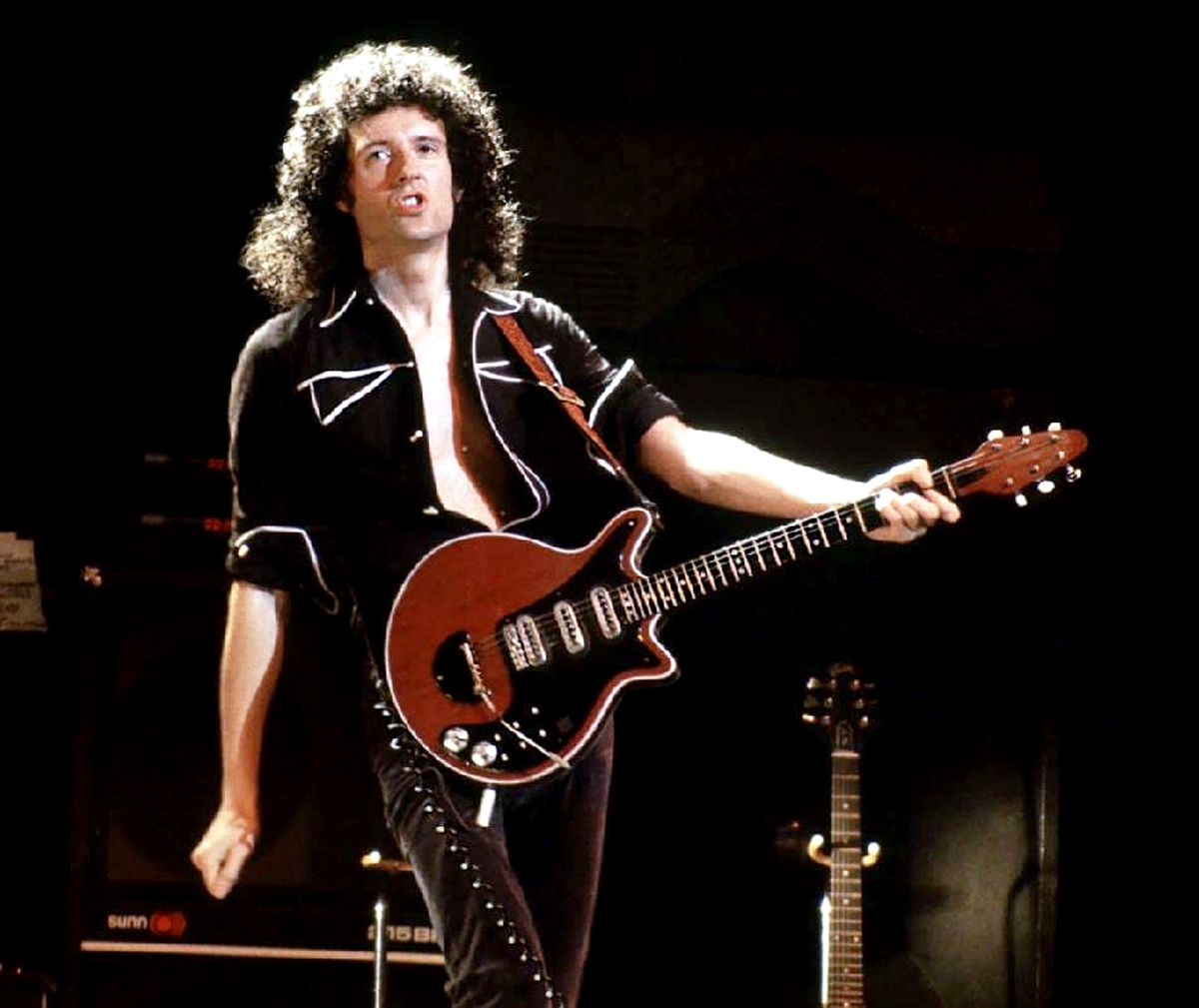 Brian May’s famous guitar, which he calls Red Special, the Fireplace or Old Lady, was handmade by himself and his father in the early 1960s. The pair fashioned the instrument from wood taken from an antique wooden mantlepiece.

The guitar was instrumental (pardon the pun) in defining May’s signature style as it was designed to feed back in the same way that Jeff Beck’s guitar did. May used his Red Special in almost every Queen recording and performance. It has been restored to its original condition several times, with restorers taking care to use the same Rustin’s Plastic Coating that May used to paint the guitar back in the 60s.

11. Two of the band’s music videos were filmed in Roger Taylor’s garden 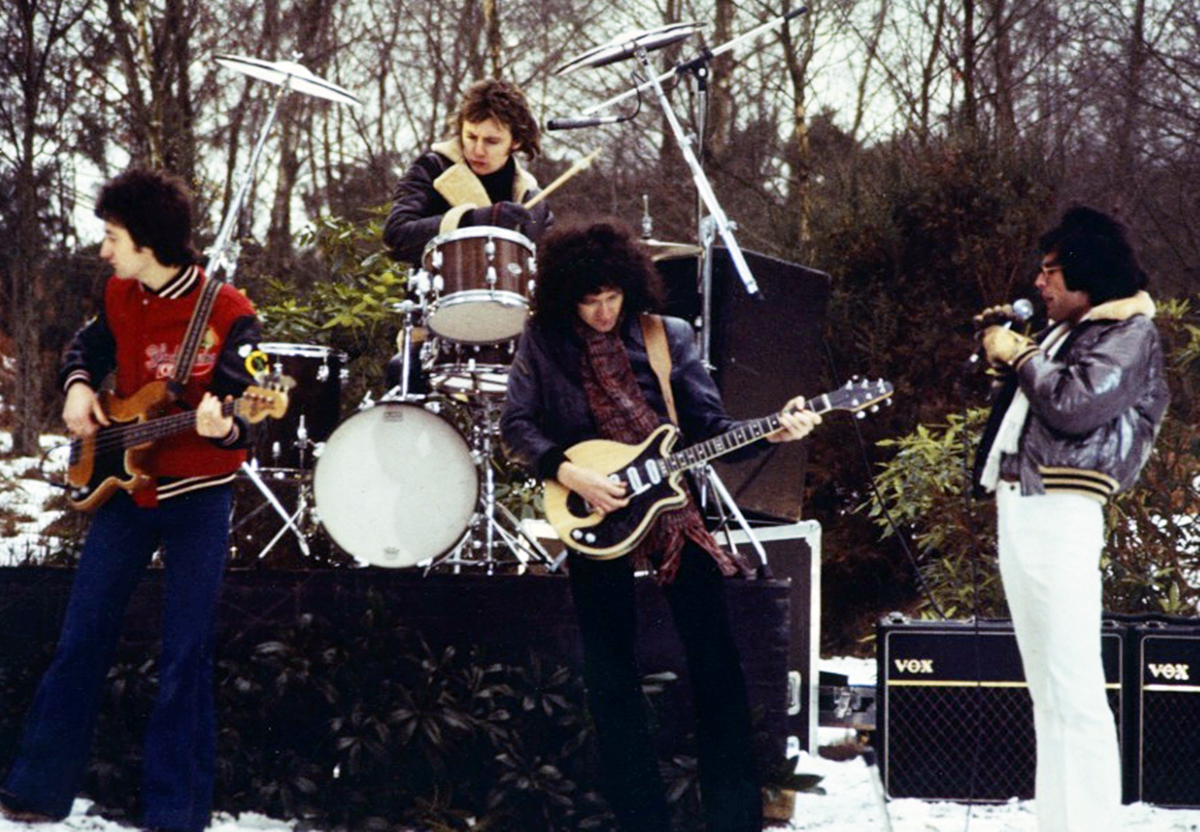 The videos for We Will Rock You and Spread Your Wings were both filmed in Roger Taylor’s garden. The conditions were freezing when they filmed Spread Your Wings – it was so cold that May played a replica of his famous Red Special guitar in the video, as he was worried the harsh weather would damage the original.

Nowadays a seven-metre bronze statue stands in Taylor’s garden. Council bureaucrats had pressured Taylor to tear the statue down, arguing that the statue was an eyesore and ruined the landscape – but Taylor emerged victorious from the battle, and in 2016 he was granted permission to keep the statue in his garden so long as he took it with him if he moved out of the property.

10. We have Michael Jackson to thank for Another One Bites the Dust 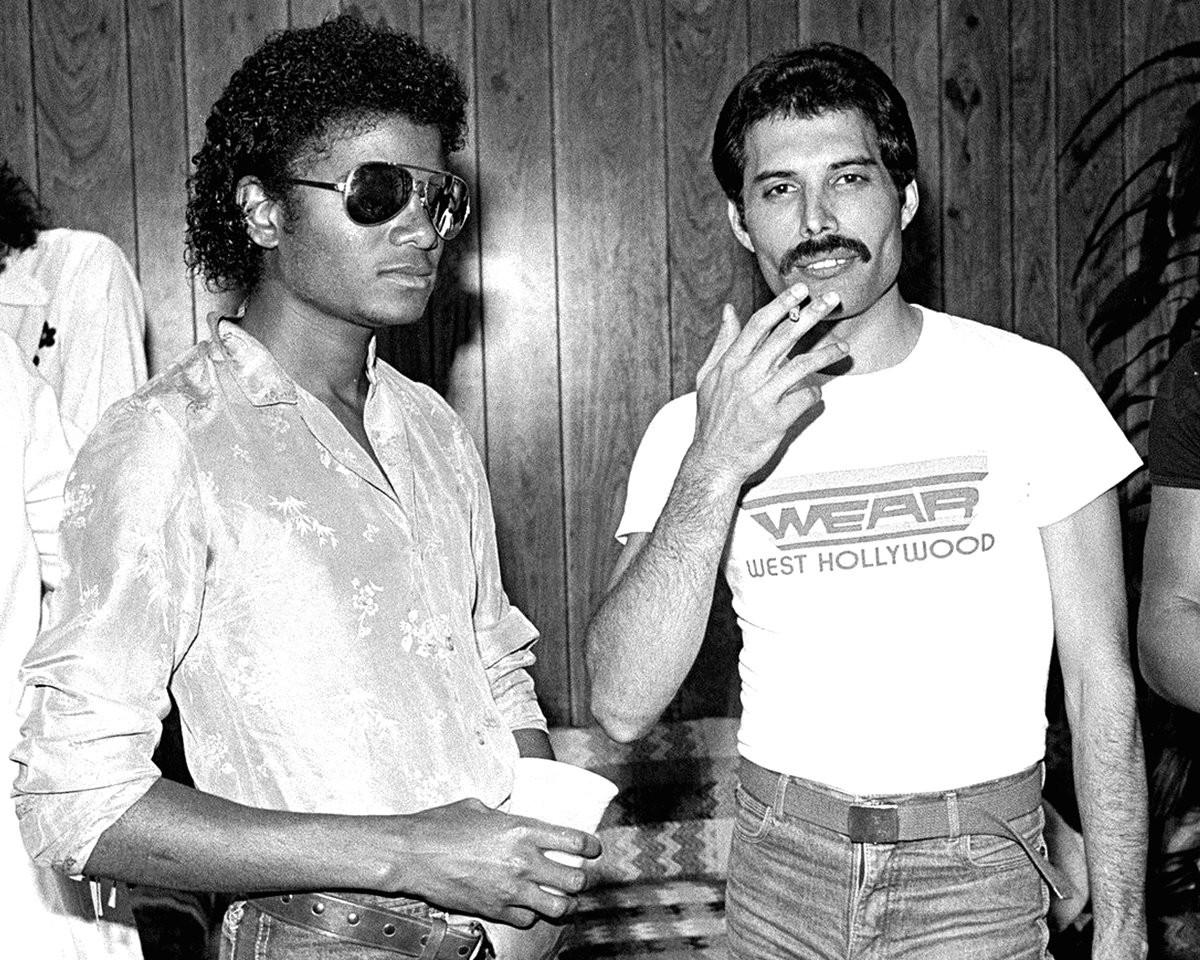 King of pop Michael Jackson persuaded the band to release Another One Bites the Dust as a single, something that they hadn’t originally planned on doing. “Credit for the song should go to Michael Jackson in many ways,” Mercury said. “He was a fan and friend of ours and kept telling me, ‘Freddie, you need a song the cats can dance to’.”

When the group came back with Another One Bites the Dust, Jackson believed it would be an instant hit. Recalling the pop star’s reaction, Mercury said: “I knew we had a hit as he bobbed his head up and down. ‘That’s it, that’s the gravy. Release it and it will top the charts,’ he said. So we did and it did.” The song remained at #1 on the US Billboard 100 for three consecutive weeks. 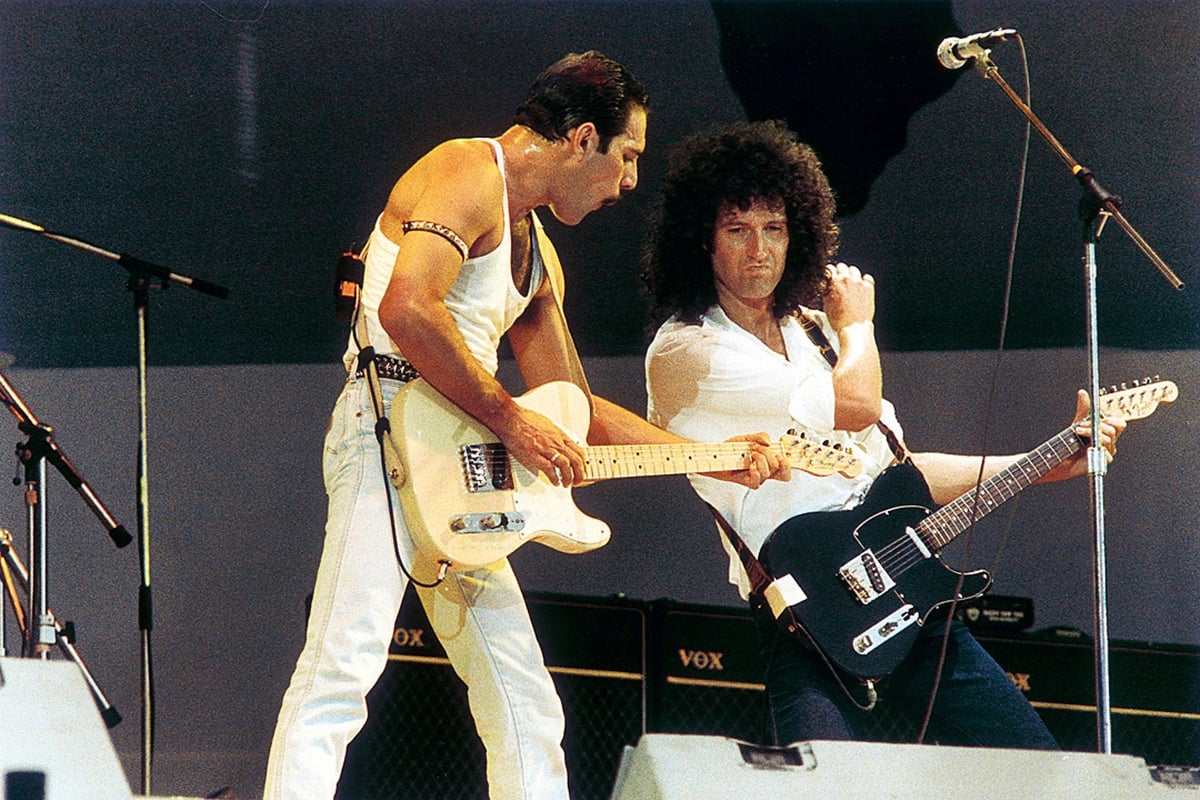 Queen knew that Live Aid in 1985 was an opportunity to reach a massive global audience. Wisely, the group took a lot of time out in advance to rehearse their performance. While some of the acts performing wanted people to hear their latest single, Queen knew their audience would be aching to hear their greatest hits, and their forethought proved to be correct when their records sales increased dramatically in the days and weeks after.

It’s now estimated that around £150 million was raised for famine relief as a result of the UK and US Live Aid concerts.

8. The performance inspires bands to this day 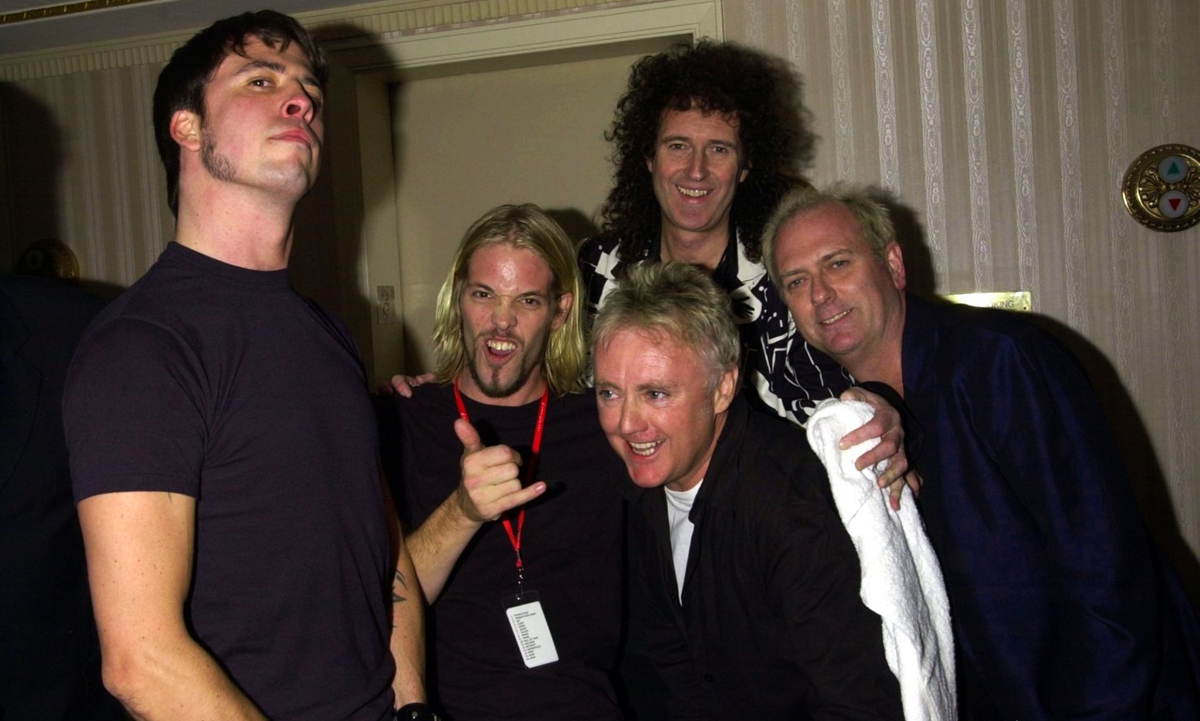 The Wembley Live Aid show was a platform for performances from some of the UK music industry’s leading lights, including former Beatle Paul McCartney and guitar virtuoso Eric Clapton – but it was Queen that stole the show. In 2005, Queen’s Live Aid set was voted the greatest rock gig of all time.

Foo Fighters front-man Dave Grohl once said “Every band should study Queen at Live Aid. If you really feel like that barrier is gone, you become Freddie Mercury. I consider him the greatest front-man of all time.” 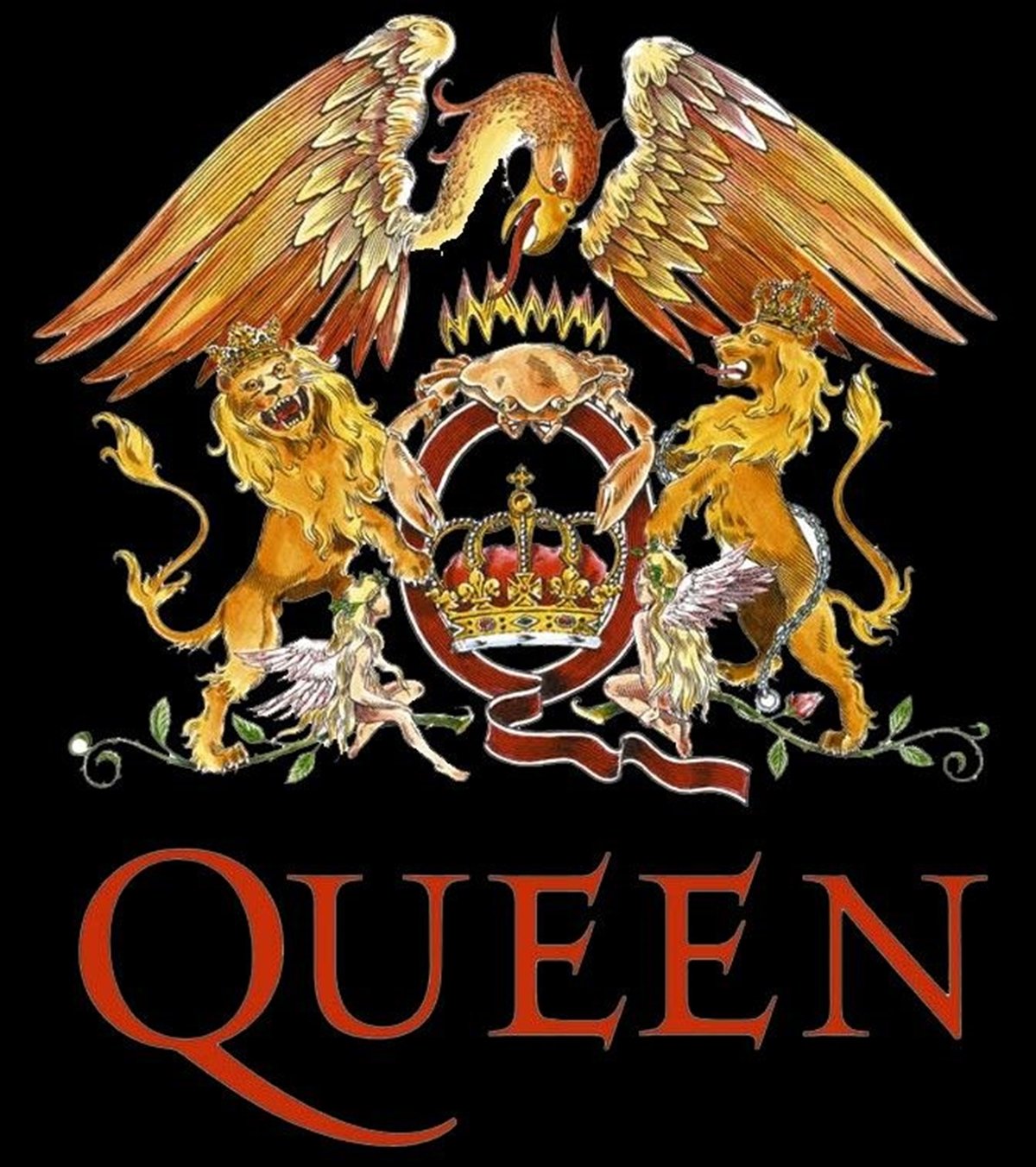 Freddie Mercury designed the Queen crest using the astrological signs of the four band members – two Leos (Deacon and Taylor), one Cancer (May) and one Virgo (Mercury). It’s a great work of art, but it should be no surprise that Mercury was a whizz at putting something together for the group’s crest.

Before joining Queen, Mercury had studied graphic art and design at Ealing Art College, and was clearly a dab hand at visual arts as well as performing arts.

6. The band didn’t get on with Bowie 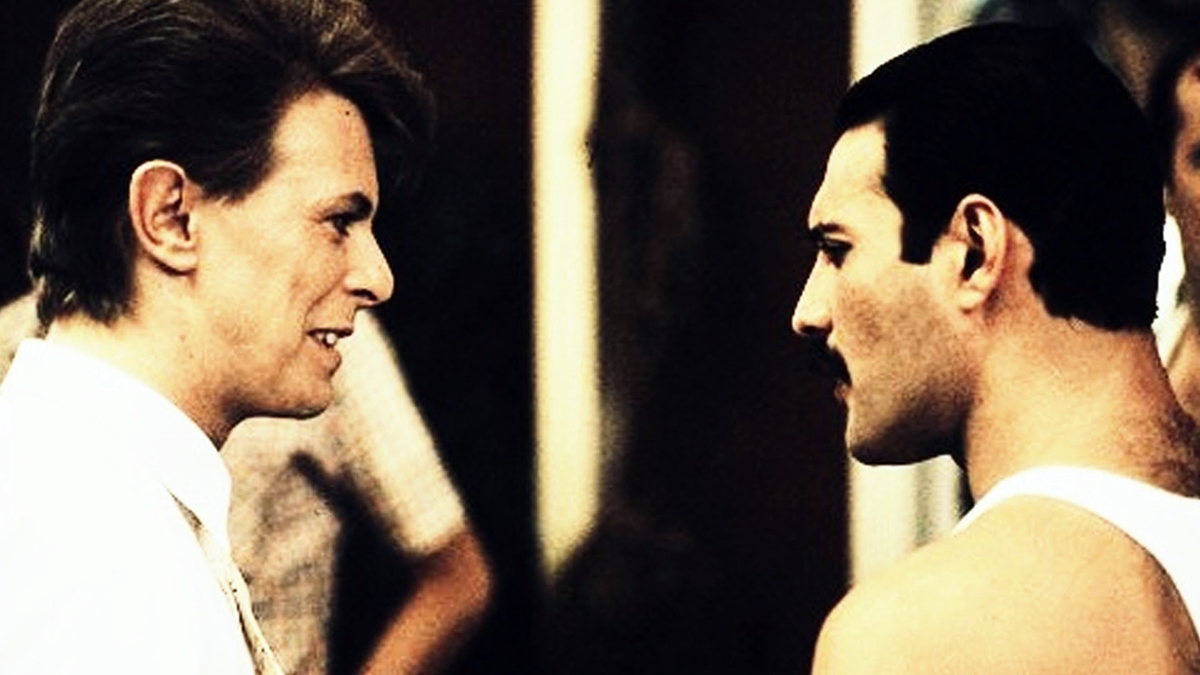 Queen didn’t get on too well with David Bowie when they collaborated together on the song Under Pressure. The two found themselves in Montreux, Switzerland at the same time and decided to collaborate just for fun – but it soon became clear that Under Pressure was a potential hit, and tensions mounted. Speaking to MOJO in 2017, Brian May explained: “Freddie and David locked horns, without a doubt, but that’s when the sparks fly, and that’s why it turned out great.”

“It wasn’t easy because we were all precocious boys and David was very… forceful, yes,” he went on. May also revealed that there are still recordings of Queen and Bowie performing together that are yet to be released. 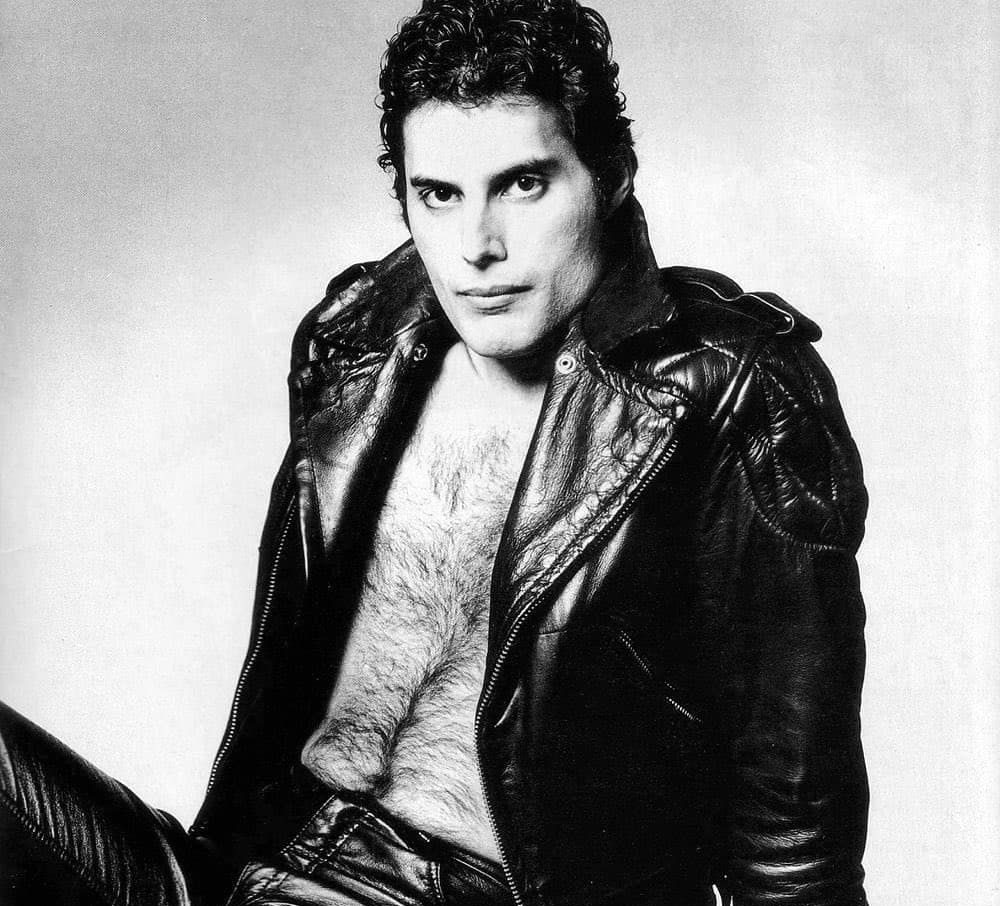 A Crazy Little Thing Called Love was an instant hit when it was released in 1979 – it peaked at #2 on the UK charts, while it was the band’s first US #1. It stayed at the top of the Billboard 100 for four consecutive weeks, a hugely impressive feat. Mercury wrote the song in part as a tribute to Elvis Presley, who had passed away two years prior.

The song didn’t even take that long for Mercury to compose – and he did it all from the comfort of a bathtub. In a radio interview in 2004, Roger Taylor revealed how Mercury had created the musical masterpiece: “Freddie wrote that in 10 minutes in the bath in the Bayerische Hof Hotel.”

4. They hold a number of Guinness World Records 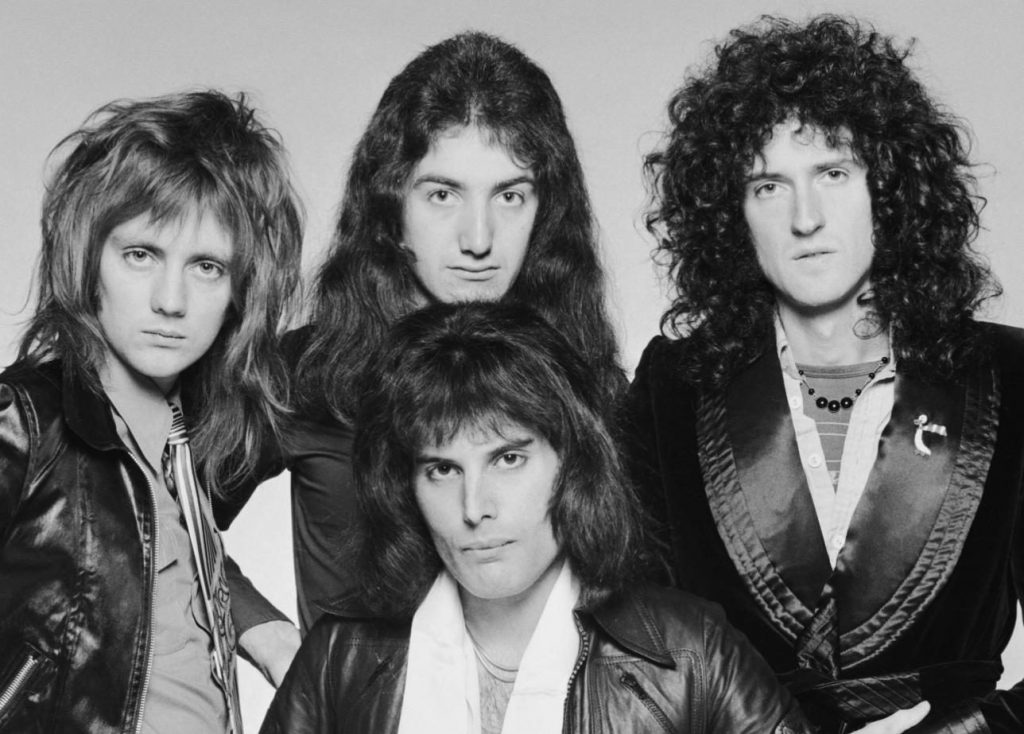 Given their unique sound and enduring popularity, it’s hardly surprising that Queen broke some records in their time. According to the Guinness Book of World Records, Queen holds the record for the world’s longest running fan club for a rock group; the UK’s favourite hit of all time for Bohemian Rhapsody; and for having their albums spending more time on the UK Album charts than any other artist. 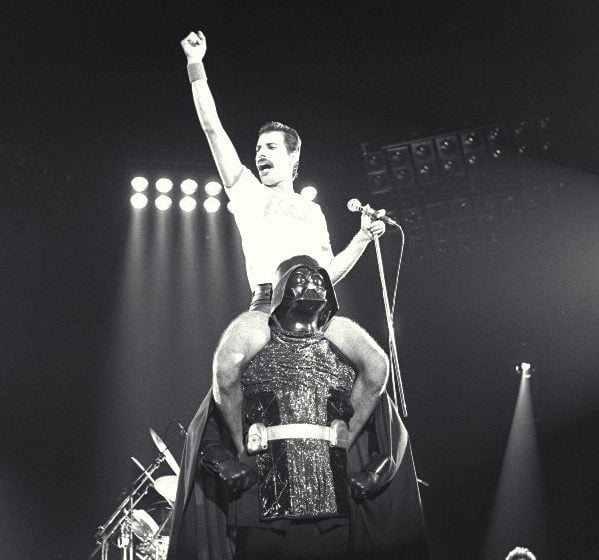 Despite what he sings in the song Bicycle Race, Freddie Mercury liked Star Wars a lot. Mercury also apparently didn’t like cycling much despite claiming that he “wants to ride his bicycle” in the song. In 2011, May set the record straight by stating that the song wasn’t “autobiographical” in any way.

“As I remember, Freddie liked Star Wars a lot, and he actually wasn’t very keen on riding his bicycle (if he even had one!) – he preferred being driven in a Rolls Royce! But he created a character in the song, and this character can say what he wants, and he can ride his bicycle where he likes!”

2. Freddie Mercury once took out Princess Diana in drag and nobody recognised her 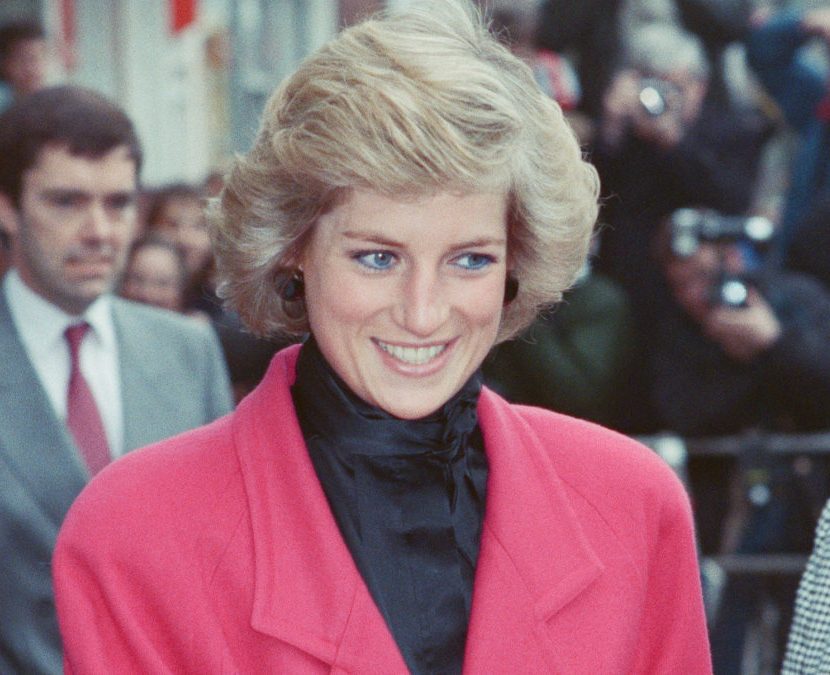 Comedian Cleo Rocos revealed in her 2013 book The Power of Positive Drinking that she’d once gone on a wild night out in Vauxhall with the motley crew of Princess Diana, Kenny Everett and Freddie Mercury. In the book, Rocos explained how the four of them had watched The Golden Girls before heading out to Vauxhall Tavern, a “notorious gay bar,” with Lady Di dressed in “a camouflage army jacket, hair tucked up into a leather cap and dark aviator sunglasses.”

After getting into the bar undetected, she apparently ordered herself a “white wine and a beer” before leaving to head back to Kensington Palace. Rocos writes that “not a single person ever found out” – until now!

1. Mercury only revealed he had AIDS the day before he passed away 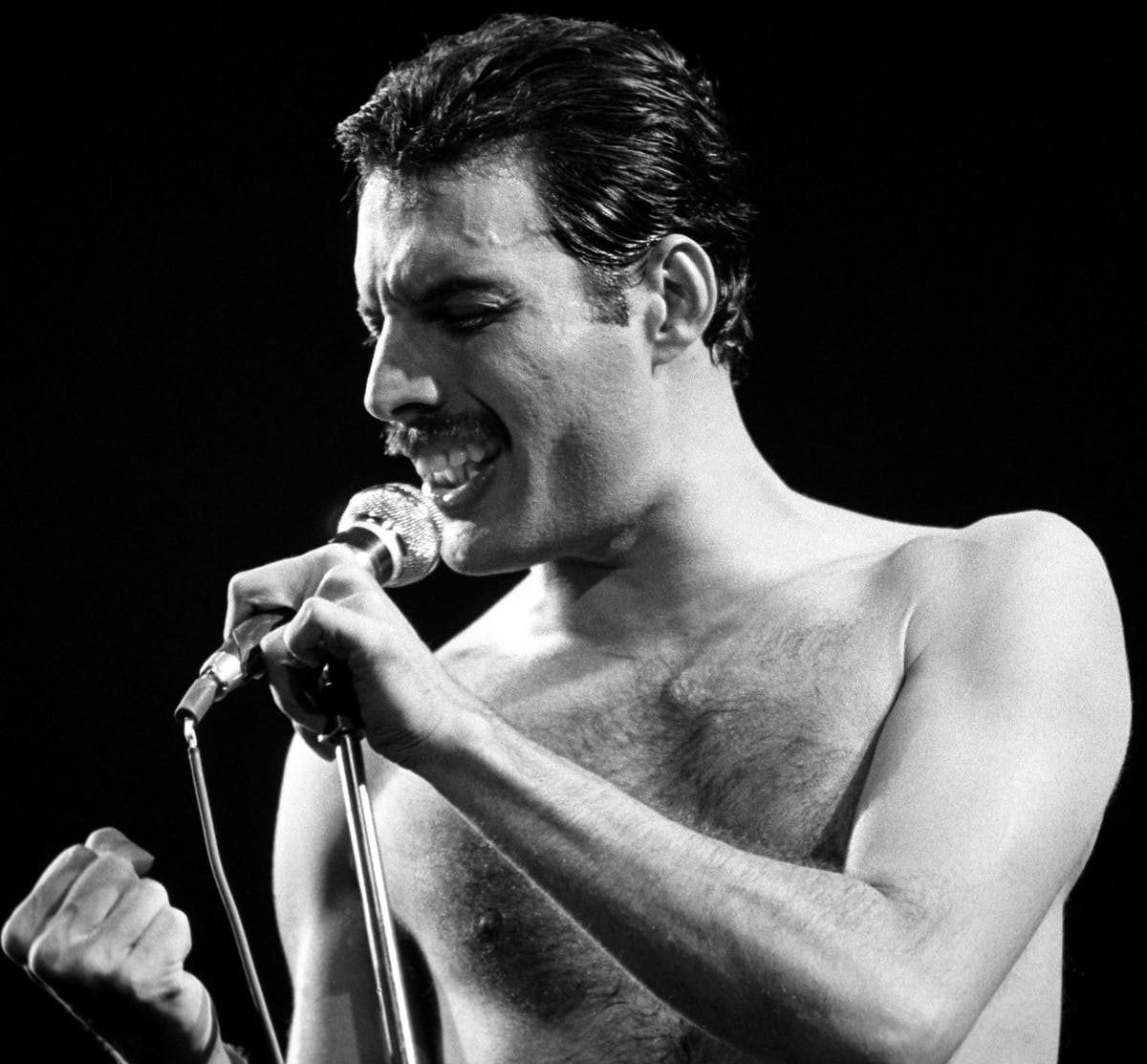 Freddie Mercury is one of the more famous of those to suffer and tragically die from AIDS – but he denied his diagnosis in interviews right up until the day before he died. On November 22, Mercury prepared a public statement with Queen’s manager Jim Beach which was released the following day. Mercury then passed away on November 24 1991 from bronchopneumonia as a complication of AIDS.

While some criticised his decision to keep his illness private, arguing that a public announcement would have helped raise awareness for the disease, Mercury said in his November 23 statement that he had remained quiet about his illness in order to “protect the privacy of those around me.”