Watching films, we were watching everything that happens in front of the camera, telling the story of a group of ghost busters, or of a house haunted by the previous occupiers.

What you don’t see very often, is what happens behind the cameras. So here, we bring you fifteen of the most fascinating behind-the-scenes photos from your favourite 80s films. Enjoy! 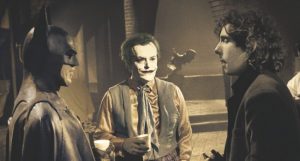 ‘Batman’ is the 1989 American superhero film directed by the legendary Tim Burton. It is the first instalment of Warner Bros. initial Batman film series. It stars Michael Keaton as the famed caped-crusader, with Hack Nicholson playing his arch nemesis, The Joker.

In this behind the scenes photo, Keaton and Nicholson can be seen talking to Tim Burton, preparing for a scene. 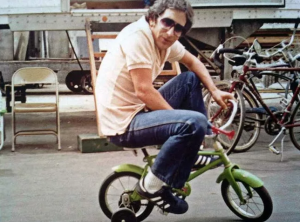 In this photo, Stephen Spielberg can be seen riding around on a small bike in the backlot of the MGM studios where they were filming Poltergeist. Spielberg co-wrote and produced the film, but a clause in his contract prevented him from directing any other film whilst he was making E.T The Extra-Terrestrial. Directing duties were passed on to Tobe Hooper after his success with The Texas Chainsaw Massacre. 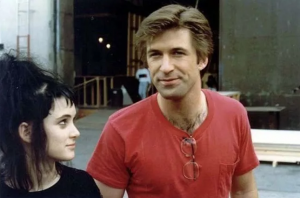 Another Tim Burton film, this photo shows Alec Baldwin, who plays Adam Maitland in the film, and Winona Ryder, who plays Lydia Deetz. The plot revolves around a recently deceased young couple who become ghosts haunting their former home.

After the success of Pee-wee’s Big Adventure, Burton was sent several scripts and became disheartened by their lack of imagination and originality. When he was sent Michael McDowell’s original script for Beetlejuice, Burton agreed to direct, although Larry Wilsonand later Warren Skaaren were hired to rewrite it. 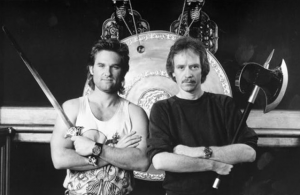 The film was a commercial failure, grossing $11.1 million in North America, below its estimated $19 to $25 million budget. It received mixed reviews that left Carpenter disillusioned with Hollywood and influenced his decision to return to independent filmmaking. It has since become a cult classic and has an 82% average rating on Rotten Tomatoes and a steady audience on home video. 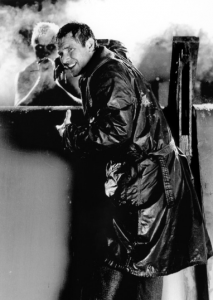 This photo shows Rutger Hauer and Harrison Ford on the set of Blade Runner. It is a 1982 American-Hong Kong neo-noir science fiction film and was direced by Ridley Scott. It is a loose adaptation of Philip K. Dick’s novel ‘Do Android’s Dream of Electric Sheep?’ The film is set in a dystopian future Los Angeles of 2019, in which synthetic humans know as replicants are bio-engineered by the powerful Tyrell Corporation to work on off-world colonies.

The film originally underperformed in North American theatres and polarised critics. Some praised its thematic complexity and visuals. Others were displeased with its unconventional pacing and plot. 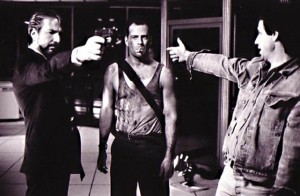 Made for $28 million, Die Hard grossed over $140 million theatrically worldwide and initially received mixed reviews from critics, although it garnered acclaim in later years. The film turned Willis into an action star. 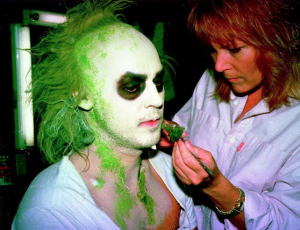 Another behind-the-scenes photo from Beetlejuice. This shows Michael Keaton getting ready for his titular role, Betelgeuse (pronounces Beetlejuice of course.) 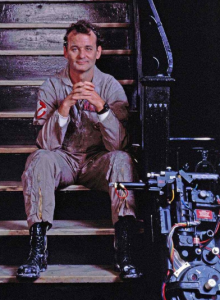 This photo shows Bill Murray chilling out on the set of Ghostbusters. The film was directed and produced by Ivan Reitman and written by Dan Aykroyd and Harold Ramis.

Aykroyd thought of Ghostbusters as a project for himself and fellow Saturday Night Live alumnus, John Belushi. He and Ramis rewrote the script following Belushi’s death.

9. Kurt Russell and His Stunt Double – Escape from New York 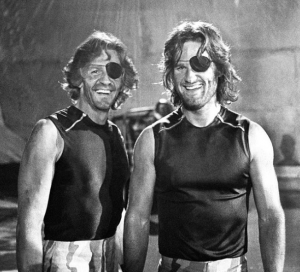 This is a 1981 post-apocalyptic science-fiction action film. Escape from New York was co-written, co-scored and directed by John Carpenter.

The film is set in what was near-future of 1997, in a crime-ridden United States that has converted Manhattan Island in New York City into the country’s maximum security prison. When Air Force One is hijacked by terrorists and crashes into New York City, ex-soldier and federal prisoner Snake Plissken (Kurt Russell) is given 24 hours to rescue the President of the United States.

10.Marty McFly’s Auto-Lace Sneakers Scene – Back to the Future II 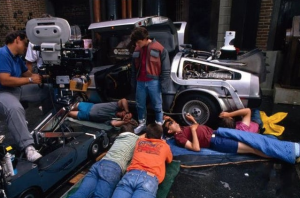 This is a shot of them filming Marty McFly’s auto-lace sneakers scene in Back to the Future 2. Look at how many people it took to film that one scene!

Back to the Future Part 2 was released in 1989. The film received mixed reviews from critics and grossed over $331 million worldwide, making it the third-highest-grossing film of 1989. 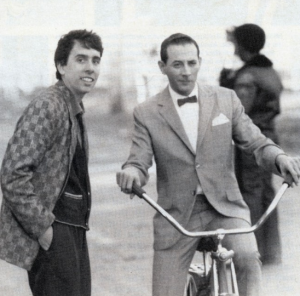 After the success of The Pee-wee Herman Show, Reubens began writing the script to Pee-wee’s Big Adventure when he was hired by Warner Bros.. The producers and Reubens hired Burton to direct when they were impressed with his work on Vincent and Frankenweenie. Filming took place in both California and Texas. 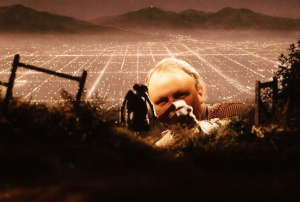 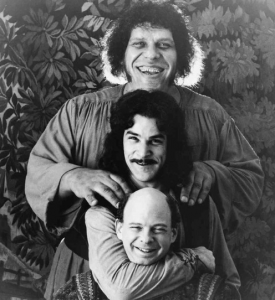 This photo shows Andre The Giant, Mandy Patinkin and Wallace Shawn on the set of The Princess Bride. It is a 1987 American romantic comedy fantasy adventure. It is adopted for the 1973 novel of the same name.

It tells the story of a farmhand named Westley, accompanied by befriended companions along the way, who must rescue his true love Princess Buttercup from the odious Prince Humperdinck. The film effectively preserves the novel’s narrative style by presenting the story as a book being read by a grandfather (Peter Falk) to his sick grandson (Fred Savage). 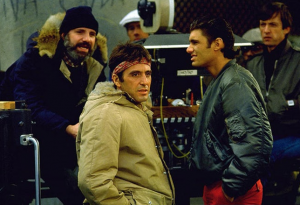 Scarface is a 1983 American crime film directed by Brian De Palma and written by Oliver Stone, a remake of the 1932 film of the same name. The film tells the story of Cuban refugee Al Capone (Al Pacino) who arrives in 1980s Miami with nothing and rises to become a powerful drug kingpin. The cast also features Michelle Pfeiffer, Steven Bauer, Robert Loggia and Mary Elizabeth Mastrantonio. 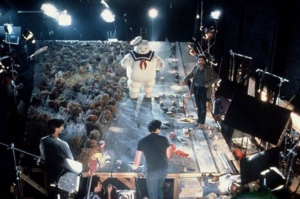 This is another case of using a miniature film set. In the film, the Stay-Puft Marshmallow man is huge. They couldn’t conceivably film this, so everything was scaled down.

It’s fascinating to see all these behind-the-scenes photos. Hopefully it doesn’t spoil the movie-magic too much.