We all remember Heath Ledger’s Joker performance in the 2008 movie The Dark Knight. He was one of the youngest actors to take on the role, and as we all know, did almost too good of a job of portraying the villain on the brink of madness.

It’s even spawned an urban legend: that the role of the Joker is cursed, and Ledger was set on a dark path from the moment he took the part. 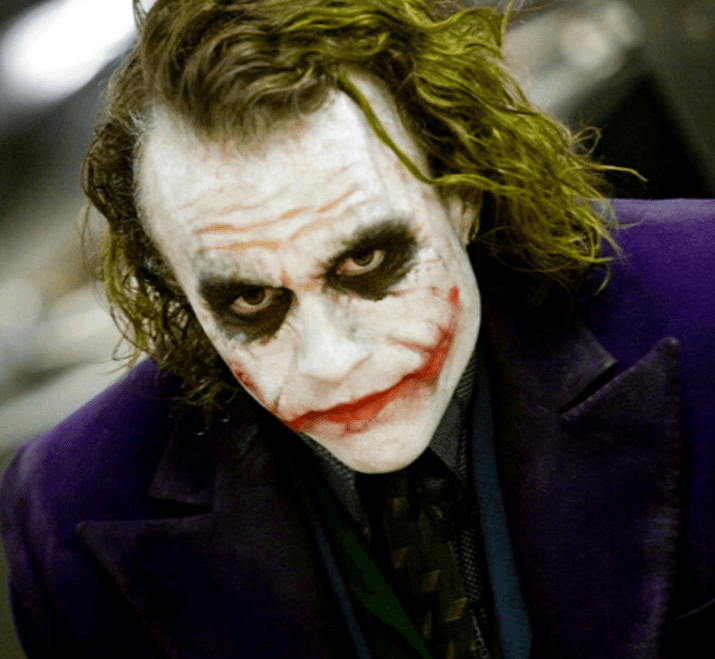 While he gave us one of the best Jokers in Batman history, let’s take a look at what it really meant for Heath Ledger to become the man behind the Joker, and look at some of the methods he used to really get inside the head of one of cinema’s most famous, and terrifying, bad guys.

Once you scratch beneath the surface, it’s quite a terrifying tale.

Caine is somewhat of a staple within the Batman franchise, and he admitted that there was a clear difference between Jack Nicholson and Ledger’s portrayal of the villain – Jack’s character had a sense of humour, while Ledger showed a true psychopath. 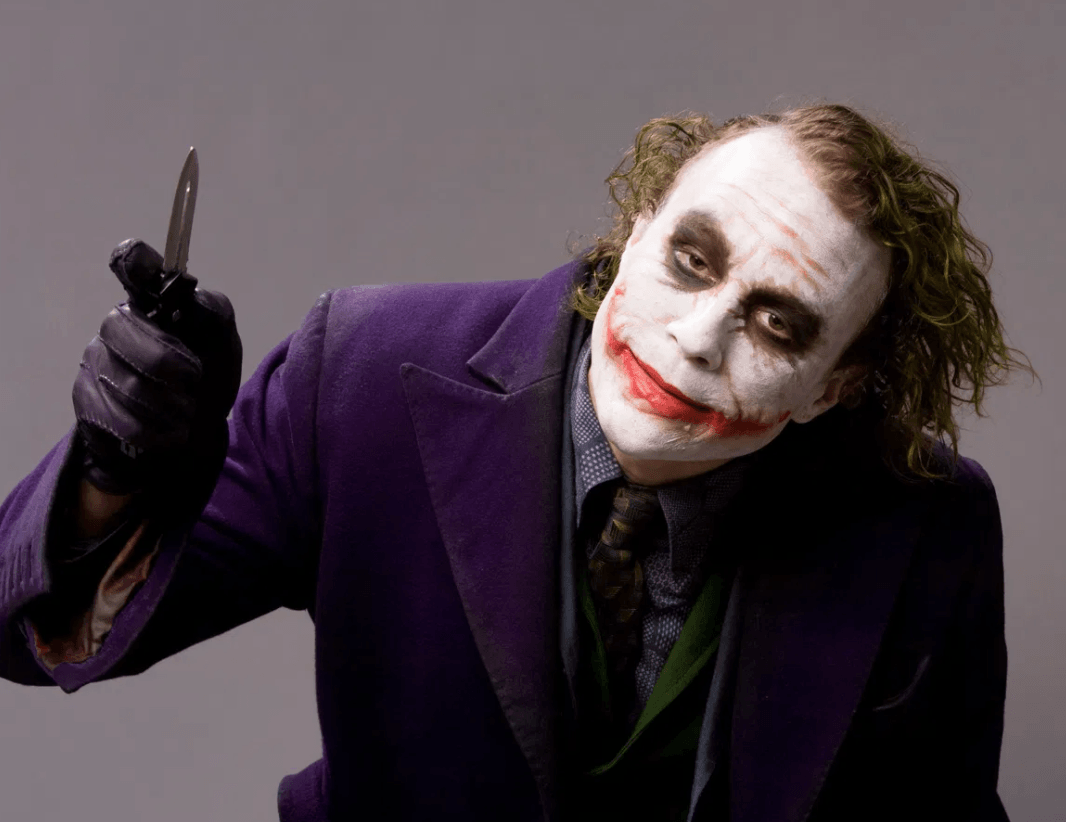 The first time that Caine saw Heath in his full Joker makeup was during the filming of the elevator scene, and Ledger was so intense that Caine forgot his lines, something that tells you just how terrifying Ledger was in the role and how he made the role as realistic as possible, as Caine is a true stalwart of cinema so it takes more than just a man in make-up to phase him! Maggie Gyllenhaal, who played Batman’s love interest, was so scared of him that she couldn’t even look at Heath when he came into the room.

We can relate to this one though, who doesn’t want to be Batman? Christian Bale ended up getting the role, and producers later realised that he would be good for the role of the Joker. 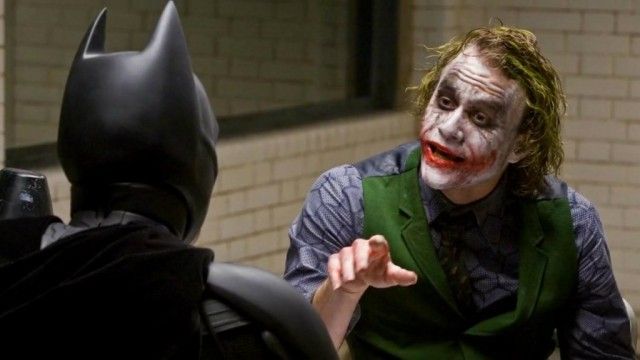 Can you imagine how different the movie would be if he played Batman instead? Do you think that Ledger could have brought a different kind of intensity to the role of The Dark Knight that could have made him seem even more on edge, and almost a dangerous kind of madness within the bat?

He locked himself away

Before the filming for the movie started, Ledger locked himself up in a motel for 43 days – he wanted to isolate himself from the world the way that the Joker would, to understand the feeling of being completely and truly alone. He got so into it that his disassociation started to affect his relationship with his partner Michelle Williams. 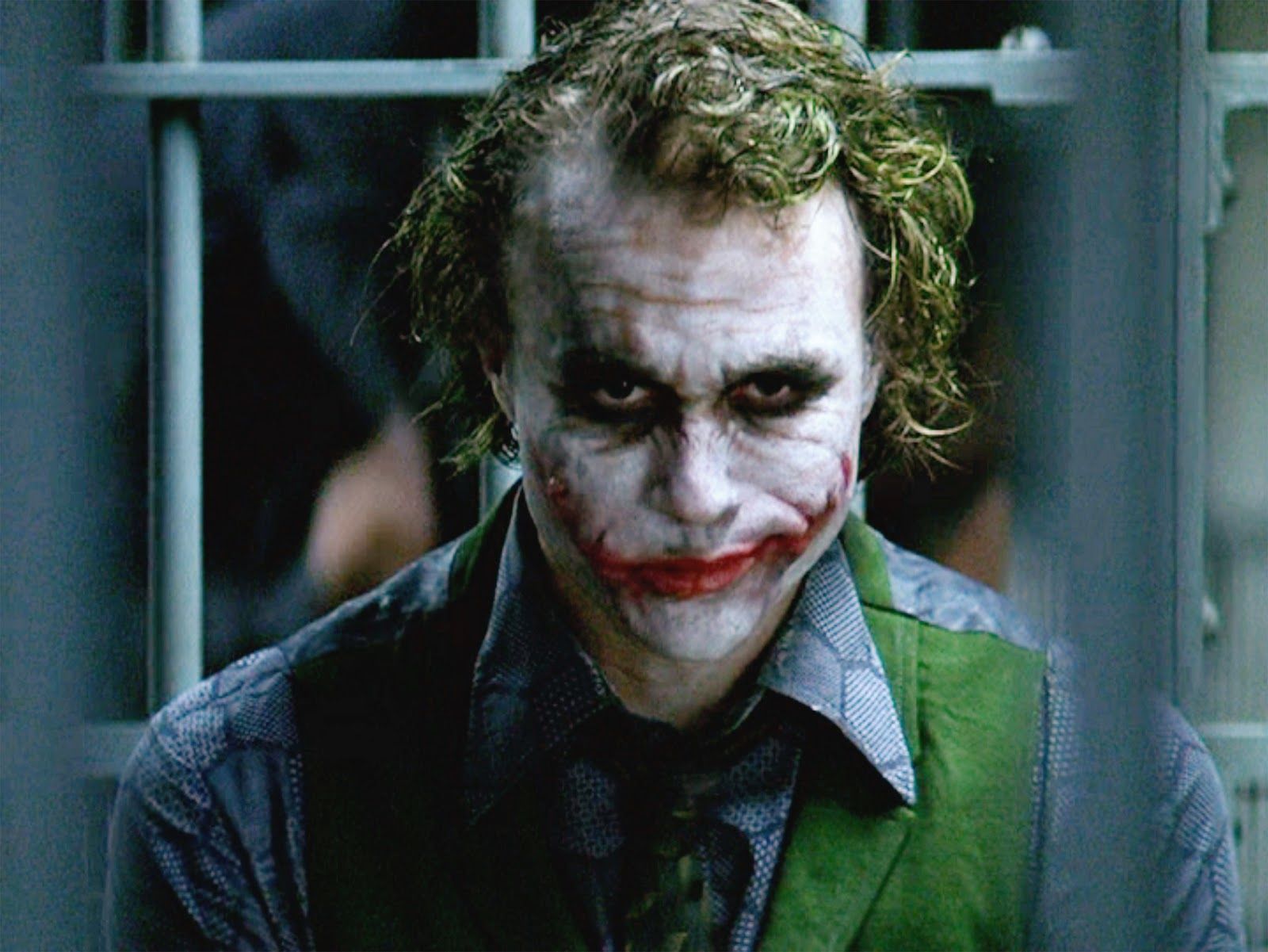 Did this have such an effect on Ledger’s psyche that he was able to bring even more to his role and helped him to really nail the perfect performance he gave as The Clown Prince of Crime?

The Dark Knight was nominated for eight awards during the 81st Academy Awards. Ledger won the Best Supporting Actor for his role as the Joker, being the first and only to win in any of the categories for a movie like that – superhero movies don’t tend to be something that the Academy looks for, but Heath was the exception. 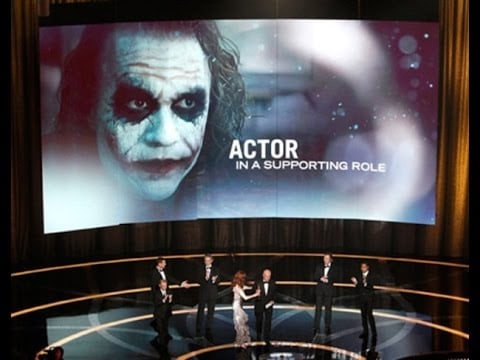 We know that Anthony Hopkins won an Oscar for portraying Hannibal Lecter in The Silence of the Lambs, but that is a very different genre, though proof that Hollywood has a place in its heart for a well-acted movie psychopath!

He was inspired by A Clockwork Orange

While researching for his portrayal of the Joker, Ledger gained huge inspiration from the 1971 classic A Clockwork Orange. He looked at the main character Alex De Large, played by Malcom McDowell – his portrayal of his character was astounding at that time. This is how he really developed the strange mannerisms that the Joker possessed. 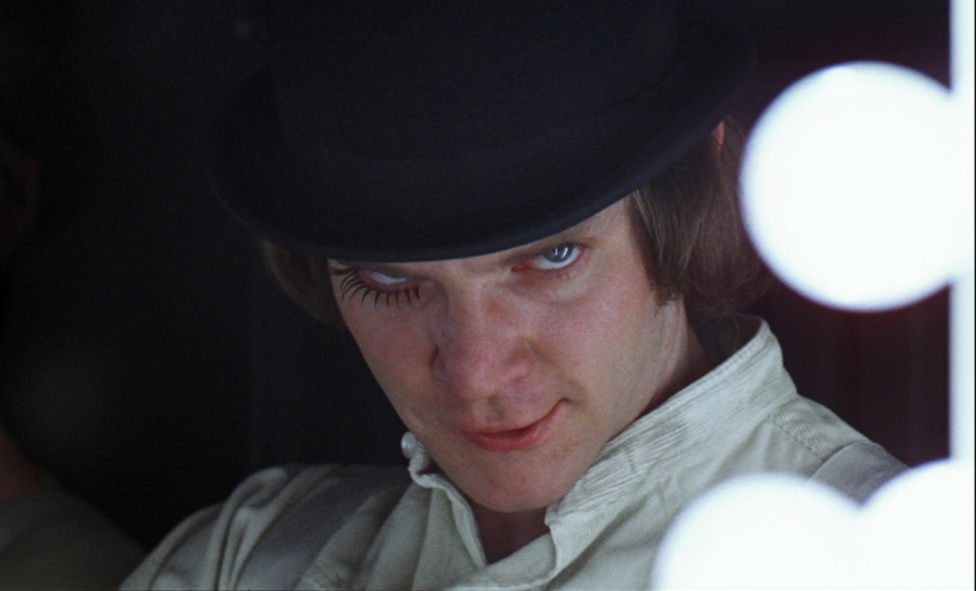 Did you notice any similarities between the two? Who do you think portrayed a man who has gone over the brink more successfully?

You’ve probably heard about this one before. While on set, Ledger was often seen carrying around a diary. It was revealed that within this journal, Ledger wrote as if he was the Joker – there was a list. A pretty messed up list. It contained ramblings of a mad man, things that the Joker might find funny – geniuses that had brain damage, sombreros, blind babies. 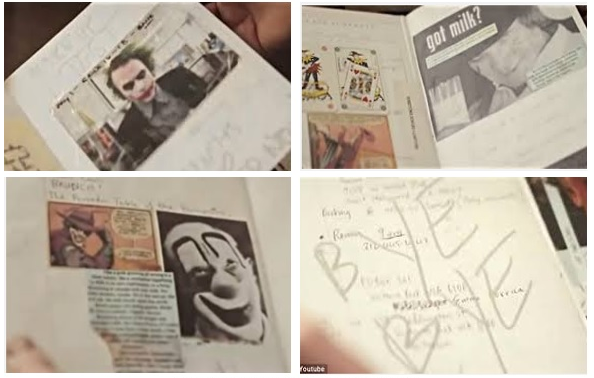 This is some pretty strong indication that Ledger may have been a little bit mad himself. It just goes way beyond the protocol of somebody trying to get in character for a movie.

He wanted Christian Bale to beat him

As we know, Ledger liked to really get into his role. In the interrogation scene, there was a brutal scene where Batman beat up the Joker – and we thought the combat was acted out immaculately! It looked so real. Turns out, that’s because it was real. 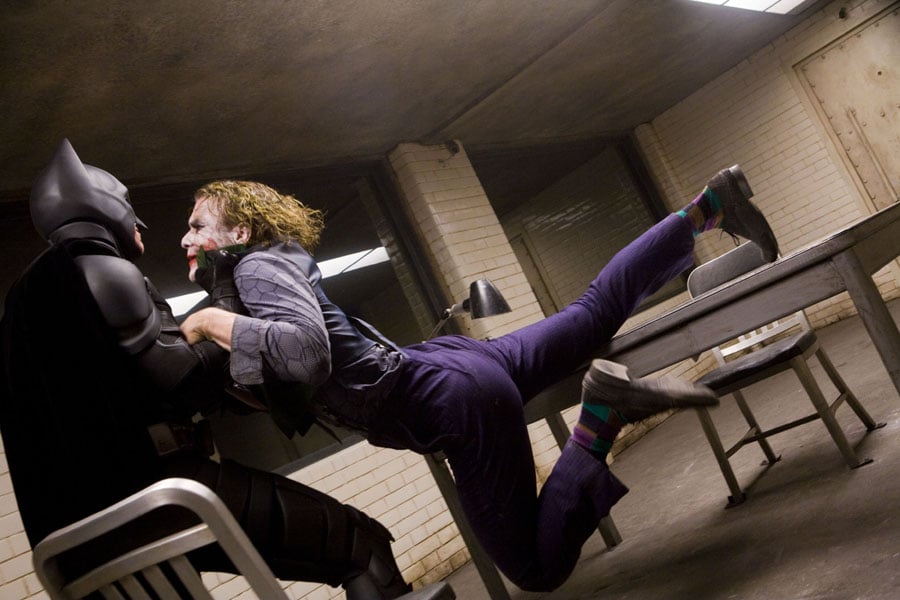 He wanted the scenes to be as authentic as possible, and asked Bale to beat him up as hard as possible. So what we saw during that scene was a real fight – we can only imagine how much that must’ve hurt, but yet another indication of how seriously Ledger took his work and what he was prepared to do for his art!

He did his own makeup

Makeup artists weren’t in charge of the Joker look that Ledger adapted, or not originally anyway. He wanted it to look like how a man would do it with a bunch of cheap makeup – so that’s what he did. The distressed yet original look was approved by the directors, and so it was up to the makeup team to recreate the rough, psychopath look every day for shooting. 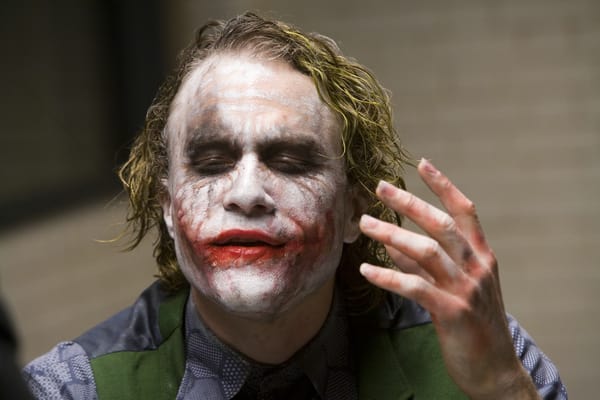 This is one that we really think helped to make the film as well, as the pure look of The Joker came across as someone totally over the edge and clearly dangerous.

He saw the Joker as a genius

There’s a debate on whether The Joker was simply just mad, or whether there was intelligence behind his actions. Ledger however made it obvious that The Joker was not only a psychopath, but a brilliant one. The scene where he tries to convince Harvey Dent to go on his side is a classic example of how smart the Joker really was. The Joker points the gun at himself and gives Dent a decision to either kill him or join his crew. 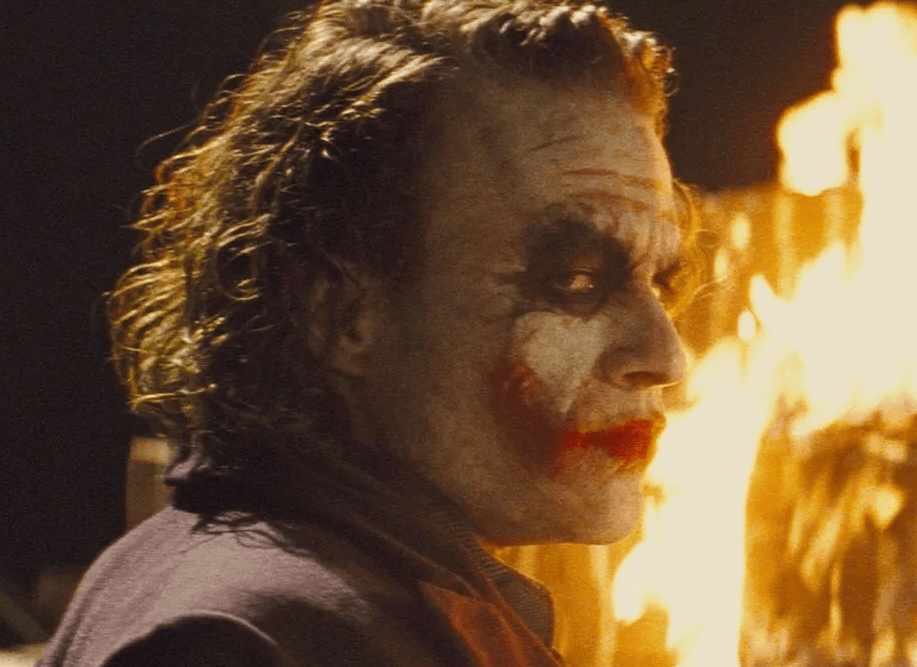 What you may or may not have noticed was that the Joker placed his finger in such a way that even if Dent tried to kill him, the trigger hammer would not have gone off. The brilliance behind the act was that The Joker never had any intention of giving Dent a choice, he had no other option but to join his team or be killed.

He improved a lot

Throughout filming, Ledger, as we know, embraced the mind of a mad man. This resulted in him adding a little extra into scenes, and most times they made it in to the film. It makes Heath Ledger’s Joker performance unforgettable. During the scene where James Gordon finds out that he has been promoted to Commissioner, the announcement was made and everyone in the room was clapping. Well, The Joker wants to join in, and he’s seen mocking the Commissioner by slowly clapping his hands as well. 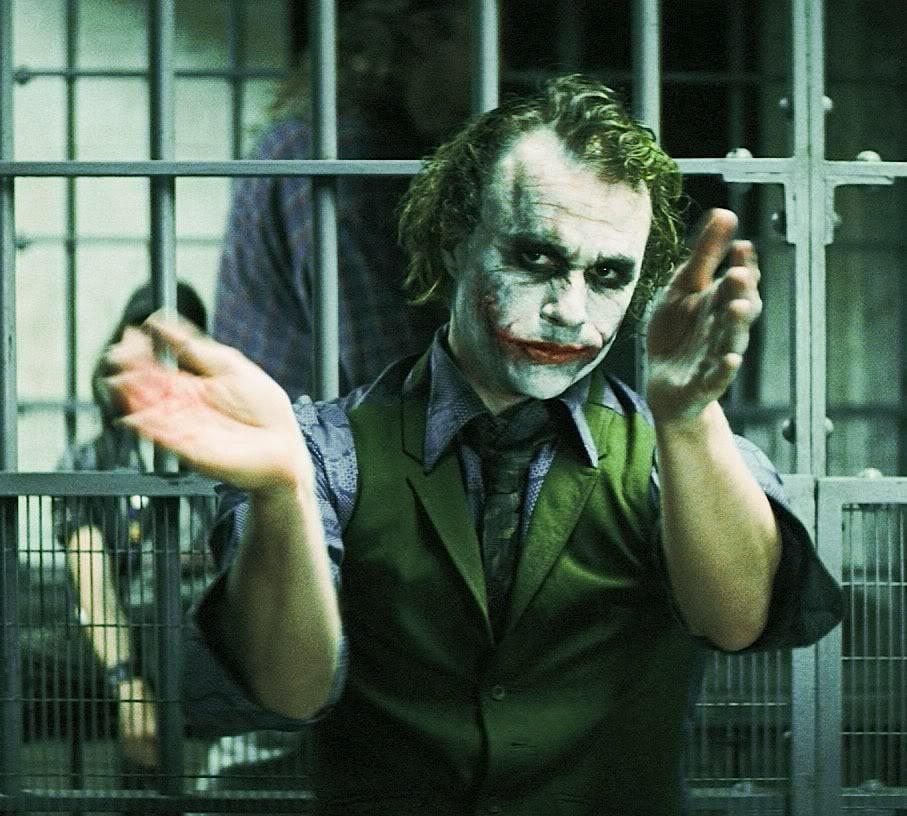 The clapping was not supposed to be a part of the movie; it was something that Heath added in on his own, yet it was such a natural thing for The Joker to do it’s impossible to work out at times where the scripting ends and Ledger takes over.

The explosion was unscripted – Ledger set it off himself

It was agreed that the explosion would be delayed for a while, but the button in Heath’s hand was actually the real button to set it off. 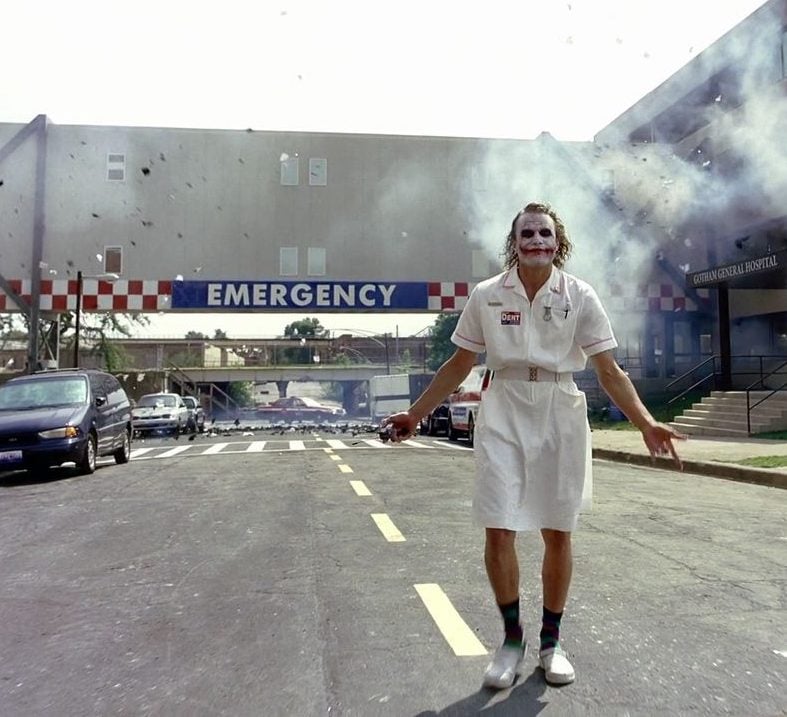 He decided on his own when the explosion would happen, and it wasn’t in the script, nor was the fact that he pressed the button without anything happening before the explosion finally went off, the whole thing was down to Ledger’s discretion.

As is common knowledge by now, Ledger liked to stay in character as much as possible. This lead to a skateboarding Joker disturbing the cast and production team during breaks – yes, Ledger loved to skateboard and did it often while on set, but imagine that in full Joker costume. 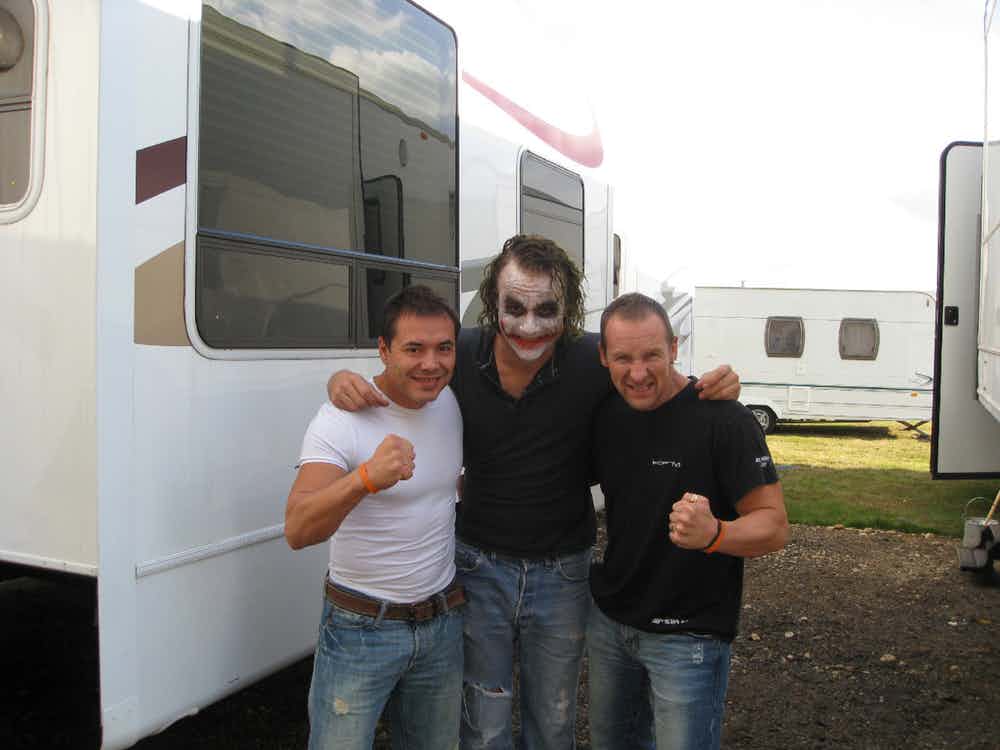 However apparently he was always in good spirits and would often try to make the crew and cast laugh during filming, and the environment was always happy and very relaxes – which would’ve balanced out the fact that he looked like a crazy psychopath all the time.

His scars are called a “Glasgow Smile”

A Glasgow smile is a gang scare originated from Scotland, and was how the gang would scar their enemies. It’s usually done with knifes but often credit cards were used to keep the mouth open. He wanted his scars to be different from anything else people had seen – The Joker in the comic books didn’t have any scarring, but that didn’t stop him. 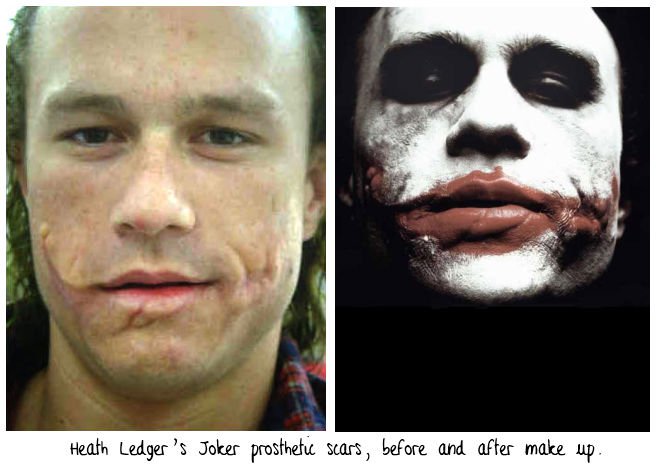 Tommy Flanagan from Sons of Anarchy has a similar scar, but his are real from a time that he got jumped after a bar fight.

His death impacted the movie

Heath Ledger died shortly after filming finished, and rumours sparked that the effects of his commitment to his role of The Joker led to his depression. He wasn’t around to promote the movie, and left it with an air of sadness around it. He was also involved in the movie The Imaginarium of Doctor Parnassus but wasn’t able to finish it. Colin Farrell, Johnny Depp and Jude Law stepped in to play variations of Ledger to complete the filming. Instead of collecting their paychecks, they donated them to Heath’s daughter Matilda. 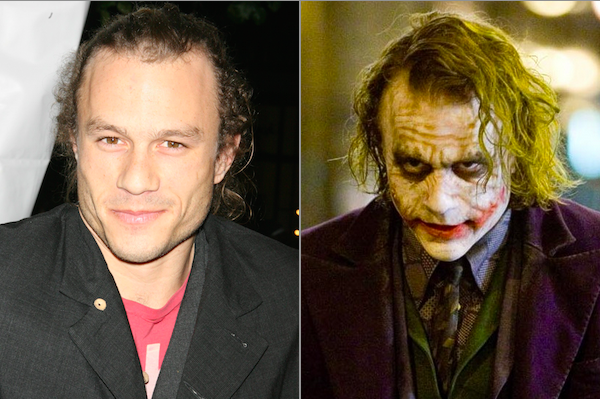 According to sources, Heath hadn’t updated his will to include his daughter, so the actors gave up their paychecks to go towards her future care.

During the bank robbery scene, The Joker is seen wearing a very unusual mask that you wouldn’t normally picture on The Joker. However there is some symbolism to the choice of the mask – a very similar mask was seen in an episode of a 1960’s Batman series. The mask has quite a bit of history since Cesar Romero wore it. 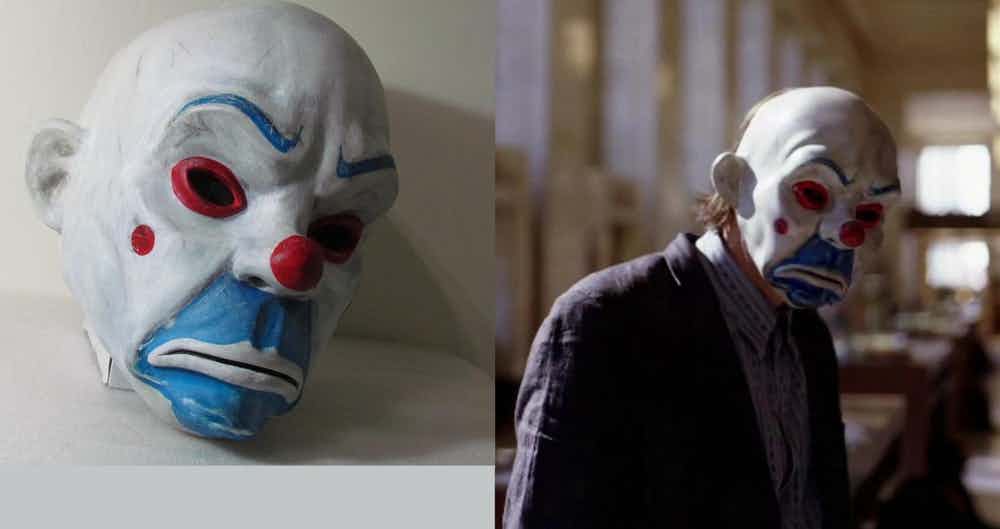 Even with the mask on, totally obscuring his face, however, the mannerisms were there giving The Joker his own character from the moment he appears on screen for the first time.

Ledger accentuated some of his own mannerisms for the role

Heath Ledger had a habit in real life of rolling his tongue on his lips and sticking it out occasionally. He ramped up these habits and brought them to The Joker, doing them even more and with more accentuation on the movement. 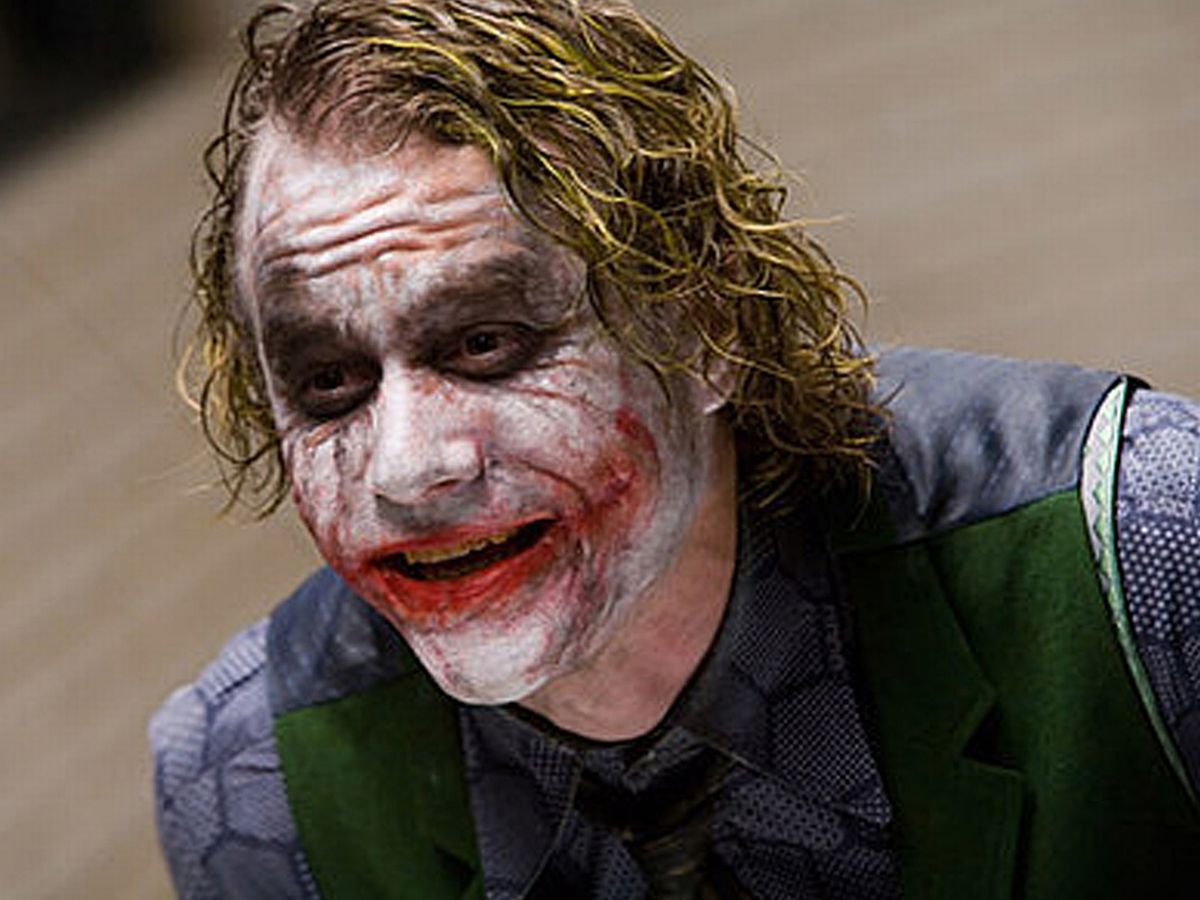 It also helped Ledger to get the voice right as the voice he gave to The Joker required his mouth to be as moist as possible to get it right!

At the time he was the youngest Joker

At the time of making the film, Heath Ledger was just 29, making him the youngest actor at the time to have portrayed The Clown Prince of Crime! Compare this to the fact that Jack Nicholson was 52 and much more experienced as an actor, and we’re sure you’ll agree that Ledger was able to hold his own against a true Hollywood great! 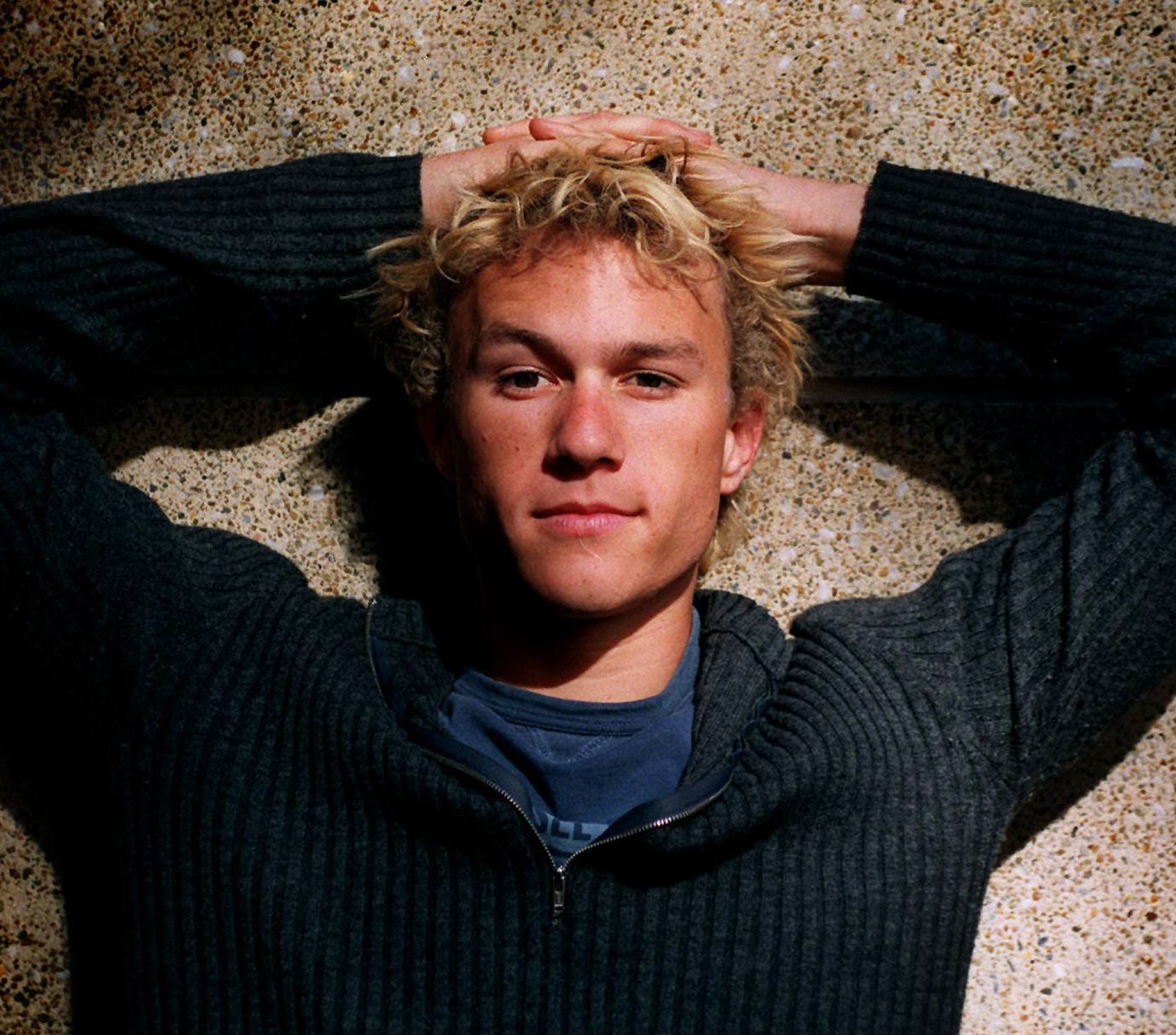 So did you learn much from these facts about Heath Ledger’s Joker? Are you surprised by just how far a man was willing to go for his art, delving in to the mind of a genuine madman to get the role right, and really making the role his own? Could you envisage anyone else having performed the role better than Ledger did?