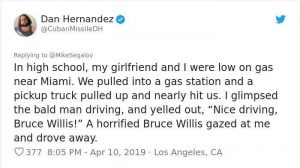 Everybody knows that Bruce Willis has the odd outrageous moment. I mean, he once made headlines for throwing a party so raucous that the cops were called, then assaulting the police officer while in drag, and that’s hardly the only surprising thing about him.

However what you might not know is that, despite the many movies in which he pulls off incredible stunts behind the wheel, he’s not the safest casual driver. Oh, and apparently he doesn’t stick around to apologise either.

14. This is just a genuinely sweet moment 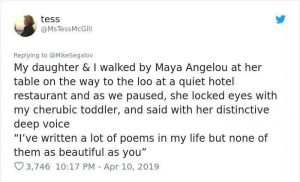 Most celebrities have an air of mystery about them, but some have more permission to be eccentric than others. Right at the top of the weirdness hierarchy, above actors or even rockstars, are poets.

Maya Angelou is one of the most famous poets on Earth, and her gentle and beautiful way of speaking have become infamous. Therefore, it’s pretty likely that this mother wasn’t even surprised when the poet decided to fawn over her kid in the middle of a hotel restaurant.

Some celebrities seem easier to get along with than others, and Jack Black seems like one of the most down to Earth of them all, as well as one of the most fun-loving. For example, if you need evidence of just how relatable he is, he bawled his way through the whole of Toy Story 3.

That’s why somehow it makes perfect sense to imagine him joining a total stranger in a rendition of Queen’s Fat Bottomed Girls in the middle of a gas stations, since that’s probably what he’d be doing by himself anyway. 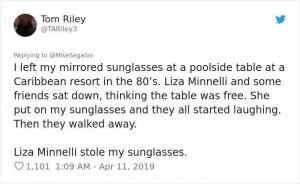 There are celebrities, and then there are legends, and Liza Minelli definitely falls into the latter category. She is one of only 18 individuals in the whole world to have an EGOT, which means an Emmy, Golden Globe, Oscar and a Tony, and she accomplished all this at the relatively young age of 45.

Of course, no-one is perfect, and this legend’s weakness is apparently accidentally stealing sunglasses. Still, it’s probably worth the loss of the sunglasses to be able to tell this story, don’t you think?

11. All the world’s a stage… including the subway 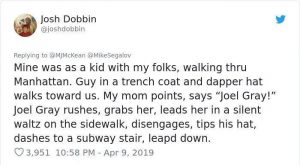 Apparently, Liza Minelli isn’t the only old school theatre legend to be prone to eccentric moment. Joel Grey, who played opposite her in the hit musical Cabaret and even won the Academy Award for it, is also fond of the odd theatrical moment.

[adunit mobile=”RTK_wCZW”]
When he was recognised by a passerby on the subway, he immediately swept the woman up into his arms, waltzed with her down the street, and then dashed away without a single word. That’s the kind of encounter you remember for the rest of your life. 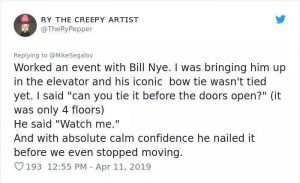 Bill Nye is a undoubtedly a nostalgic hero to many people, since his show Bill Nye The Science Guys was one of many staples of every 90s kids’ school days. However, it turns out that he’s become no less legendary in the years since his original show aired.

That much is proven by this encounter, where Nye managed to tie his signature tie in less mere seconds flat while in an elevator, and then walked out without another word.

9. Sometimes you should meet your heroes 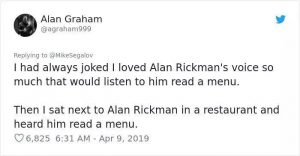 When you look at the roles Alan Rickman has played over the years; Professor Snape, Hans Gruber, the surprisingly brutal Sheriff Of Nottingham in Robin Hood, you’d probably get the impression that he wasn’t a very nice man.

However, meeting him was the quickest way to prove that he was as kind offscreen as he was unkind on. In fact, he was such a fascinating person that something super mundane, like hearing him read out a menu, is the kind of exciting story you tell your friends about.

8. When taking a chance pays off 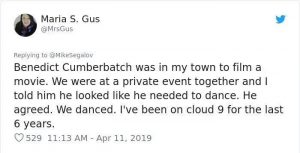 There are a lot of heartthrobs in Hollywood, but some in particular inspire a following that’s even more loyal than all the rest. With his work on Sherlock, The Hobbit and Star Trek all in quick succession, Benedict Cumberbatch quickly made his way up the ranks as a prime target for fangirls.

With that said, all the adoration in the world can’t stop you from feeling gloomy sometimes, and this fan was lucky/unlucky enough to catch him on a day when he wasn’t feeling too great. She suggested they both cheer up by dancing, and they both walked away with a sweet, if slightly unlikely, story to tell.

7. This guy should have picked a different favourite movie 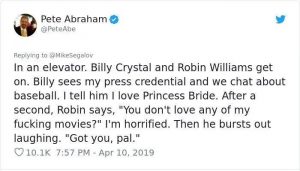 Few people have ever reached the caliber of Robin Williams when it comes to kindness. Most of the times he’s hit the headlines in the past few years have been related to some good deed he has done, such as writing to his costar’s school to insist she be readmitted. However, just because he was a sweet and genuine person, it doesn’t mean he was always above a joke.

That might explain why, when this fan found himself in an elevator with two movie legends, he pretended to flip out when the fan complimented a movie he wasn’t in. Still, it might have been a better idea to compliment them both, and spare themselves all the stress.

6. Backed into by the Beckhams 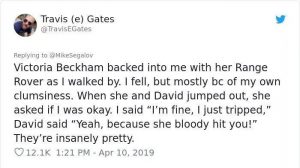 If there’s any category of celebrities that get a bad name, then it’s almost overwhelmingly footballers and their wives. Sometimes this is justified, as the reasons they end up in the news aren’t always so savoury, but sometimes they surprise people by being genuinely kind.

Sure, it would have been preferable for Victoria Beckham to never have backed her car into a passerby in the first place, but then being helped up and reassured by both halves of the Beckham’s isn’t a bad way to make up for it. 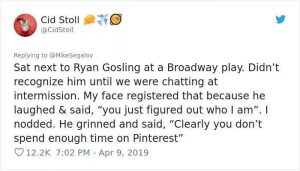 Not many Hollywood stars have a more wholesome reputation than Ryan Gosling, which is surprising, since he was actually suspended from school for throwing knives when he was a kid. However, now almost everyone in the world has seen his face in one rom-com or another, even if it takes a little time for them to remember that they have.

That’s what happened to this guy, who ended up sitting next to Gosling during a Broadway play, and only realised who he was during the interval. Thankfully, the star reassured him that he wasn’t really his usual target audience.

When it comes to meeting the actors who played your favourite characters, you usually want to see the person behind it all, but that’s not always true. Gonzo is one of the country’s favourite muppets, and so seeing the puppeteer behind the beloved daredevil might have been too much to handle.

Instead, this gracious puppeteer let Gonzo meet the fan instead, shaking his hand and even remarking on how realistic he was. It probably gave the fan an existential crisis to deal with about whether he was real at all, but at least he got to say he’d met a muppet in person.

3. When you step into a real-life action movie 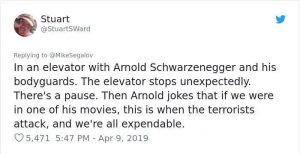 Arnold Schwarzenegger has always acted as though he was the star in an action movie of his life, even going so far as to sneak out of basic training in the army, just so he could attend a bodybuilding competition. With that in mind, this next anecdote makes a lot more sense.

Essentially, a fan found themselves in an elevator with Schwarzenegger, and was matter of factly told that if this was a movie, it was the point in the film where they’d be attacked by terrorists. As if that wasn’t unnerving enough, he then said that if that happened, they’d all be expendable.

2. When Stephen Fry gets you a job 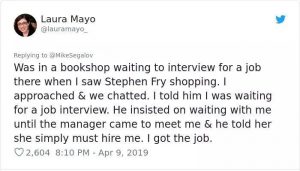 There aren’t that many scenarios that are almost universally nerve-wracking, but there are a few. For example, most people would be nervous about a big job interview, and most people would get flustered if they unexpectedly met a treasure of British entertainment.

Unfortunately for this person, they had both happen on the same day, when they bumped into Stephen Fry while waiting for a job interview. Thankfully it ended up helping, since Fry met the manager and insisted that the fan was perfect for the job. The result? She was hired on the spot.

1. A casual catch-up, with Morgan Freeman 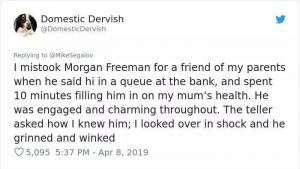 When it comes to the acting business, no-one is more recognisable than Morgan Freeman, to the point where there are only a few things the general public don’t know about him. Because of this, it’s inconceivable to imagine someone talking to him without realising who it was, and yet that’s exactly what happened to this person.

Somehow, they managed to mistake the Shawshank Redemption star for a friend of their parents, and gave him a full update on their mother’s health. It was only after a ten minute conversation that they realised what had happened, and all Morgan Freeman did was wink.