Michael Jackson owned some weird and creepy stuff, and we’re about to take a look at some of the things that were found in the Neverland Ranch. Michael Jackson was well known for being more than a little eccentric and having unusual tastes, so some of these are a little odd and a little bit creepy too! It’s estimated that these impressive looking shears have a value of around $3,600-$5,300, and were put on auction after Michael’s death. Everyone loved Edwards Scissorhands, it was an incredibly well-made and moving film, with Johnny Depp putting in one of his best acting performances, but the removed scissor hands, kept on show in a box do seem a little bit strange and just a bit creepy! Despite being photographed in the hyperbaric oxygen chamber, Michael dismissed claims that he slept in the bed. The star ended up donating the therapeutic chamber to a medical center in California, where it could be used to aid burn victims. This was another one of those strange moments and rumours surrounding Jackson, but it’s great that the chamber ended up going to those who would really benefit from it. These masks are incredibly eerie, and one of the strangest additions on this list. They have an approximate worth of $415-$600. It’s not so much the fact that they’re casts of himself, but the strange way the faces are contorted as if they’re in agony – maybe a symbolism of his inner turmoil? We wonder where he put these on display? Looking rather royal indeed, this throne was also auctioned following the Neverland ranch raid. No real gold was used in the making of, but it still has a value of around $1,200-$1,800. Michael was the self-proclaimed Prince of Pop so this was certainly a very fitting addition to his collection! After living with MJ amongst many a strange art piece, Bubbles the Chimp went on to create art of his own. His exhibition, “Apes That Paint”, showcased his work in Miami – with each of his five paintings selling for $750. The cash went towards his ape sanctuary. After the film Moonwalker was released in theaters in 1988, the video game of the same name shortly followed. The player controls Michael as he rescues kids from a villain called Mr. Big. It was a successful game, and a bit unusual in the fact that players would defeat the enemies by dancing at them, and as you went on you could do some more elaborate moves including the Moonwalk! In a 2009 auction, Michael’s Batsuit valued $800-$1,200. Michael was a massive Batman fan and would have been keen to compose music for the 1989 movie if he didn’t have concert commitments. It’s interesting to think how the soundtrack would have been if Jacko had done the songs rather than Prince, it would certainly have been very different! And can you actually picture Michael in the above Batman suit? Now that’s creepy! This robot of Jackson’s likeness was custom made, with a current value of between $1,800-$2,400. If you think this looks familiar, it looks very similar to how Michael Jackson transformed when becoming a robot in Moonwalker, so we wonder if it was based directly on that. 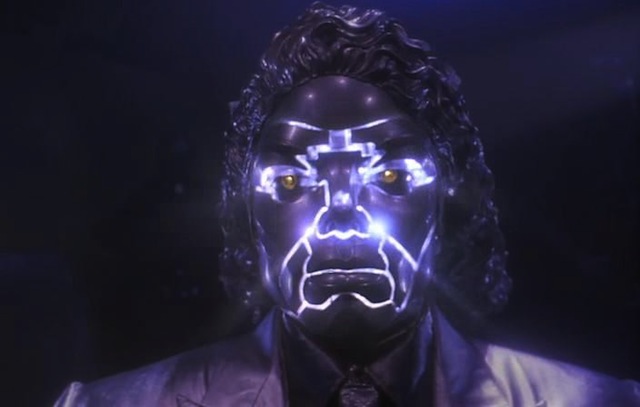 This was found in Michael’s secret closet and makes us think that the two of them were even closer than we first realised. Culkin is the godfather of Michael Jackson’s daughter Paris – and they share matching tattoos. There were a lot of rumours about just how close these two became at the time, so it seems strange that this was secreted away. Culkin made this in 1991, and would have been about 11 years old at the time. Another sign of the amount of time that Jackson and Culkin spent together, and certainly an unusual addition to this eclectic collection. Mannequin children were found at the Neverland Ranch, all of which were life sized and posed strangely. Three of them were even found positioned at desks, and appeared as though they were talking to each other. This one really is just incredibly strange and creepy and makes you wonder just what was going through Jackson’s head at the time he had this done. Famous for wearing this in a 1971 performance, Michael was 13 years old when this tassled choker became a part of his wardrobe. This is a much more down to Earth entry in the collection and fully understandable why Jackson would want to keep this as it is a real reminder of the days when he shot to fame. This statue of a tattered little boy joined the many other life sized children’s figurines on the Neverland Ranch. Again an unusual collection and it makes you wonder why Jackson chose to have these and to display them. It makes you think that Jackson was incredibly lonely and he often seemed to identify far more as being a child than an adult as if he simply hadn’t grown up, so did he see these as “friends” of some sort?

14. A picture of Michael as The Pied Piper.

Another very unusual addition, this picture depicts Michael leading a very long train of children down a path and bares more than a passing resemblance to The Pied Piper of Hamlin story. This is another one that does make you wonder exactly where Michael’s thoughts were at and what role he felt this depicted himself.

Which of these items did you find the weirdest? Do you find them creepy or just a little bit different and eccentric? Was Michael Jackson a creative genius, or a lost soul (or a combination of both)? Let us know in the COMMENTS.