We suspect that like us, many of you enjoy a trip to the cinema to see the latest science fiction movie. It’s wonderful to be swept away into the world that’s being presented up on the big screen, and we love to get lost in all kinds of far-fetched and fantastical adventures.

Rarely do we think about how they achieved the effects we see up on the screen, but today we’re going to encourage you to do just that, with the following 14 rare behind the scenes photos from some of your favourite 80s sci-fi movies.

Be sure to post a comment letting us know which of the movies below is your favourite, and please do share this post with your fellow Eighties Kids, so that they too can view these super rare behind the scenes shots! 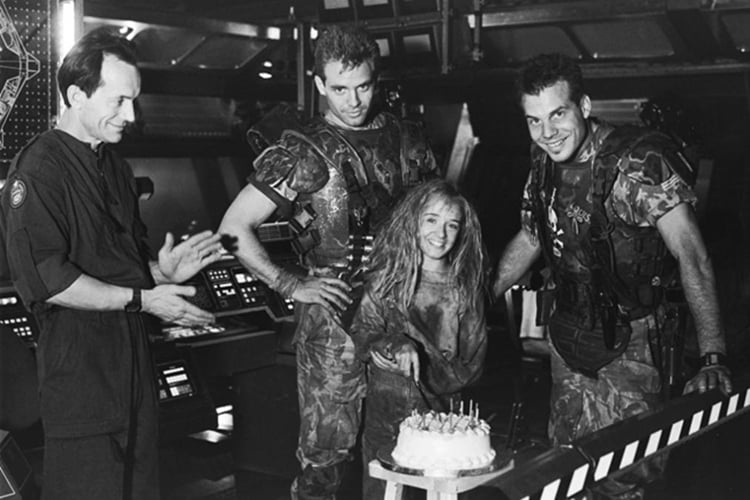 There’s often a debate as to whether Alien, or its sequel Aliens, is the better film. To be honest it’s like comparing chalk with cheese, as they might be part of the same franchise, but they couldn’t be more different, with one a horror film and the other an action film.

Whatever the answer, today we’re focussing on Aliens, it being the film that was released in the 1980s, and here are a couple of amazingly rare behind the scenes photos taken during its production. 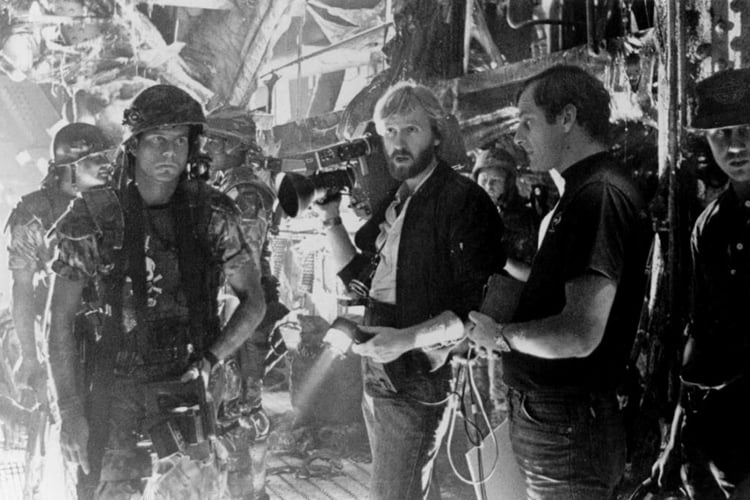 The visionary filmmaker behind this second instalment in the Alien saga was of course James Cameron, and things didn’t always go smoothly for the legendary director.

Because for one, Cameron was not always popular on set, and after the original director of photography was fired for refusing to light a scene the way Cameron wanted, the crew even walked out for a time! 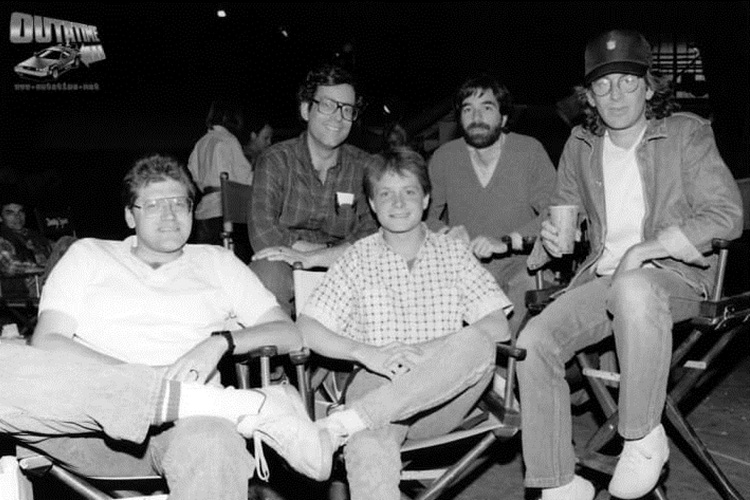 For many of us Eighties Kids, the Back to the Future trilogy is a big part of our youth. From the classic original film, to the futuristic (at least at the time) antics of the sequel, culminating with a wild (west) ride in the third and final film, Marty and Doc’s adventures thrilled us from start to finish.

And despite not being directed by Steven Spielberg, the legendary director was definitely hands on during the production, as this amazing behinds the scenes shot from the original film attests. 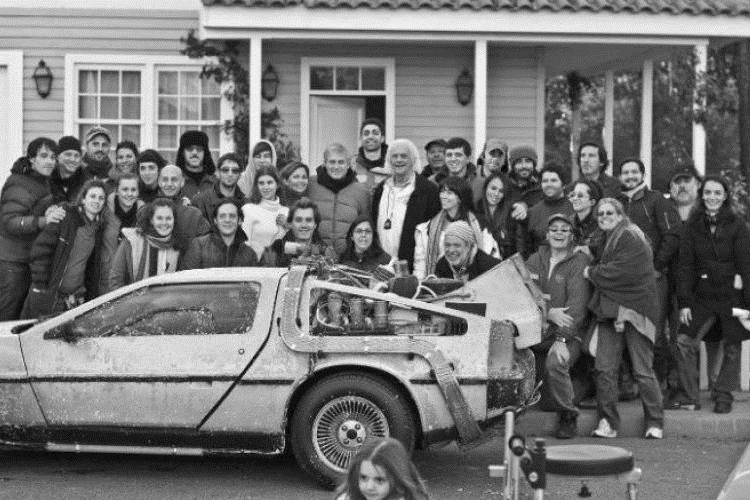 Here we have a group shot featuring the entire cast and crew, as well as the DeLorean of course, but do you know that Marty McFly was not played By Michael J. Fox at the start of production?

Eric Stoltz was sacked from playing Marty after filming had begun, although he may still appear in at least two shots of the first film. For example, there is a shot where Marty dives into the DeLorean at the beginning of the film that many think is Stoltz rather than Fox. 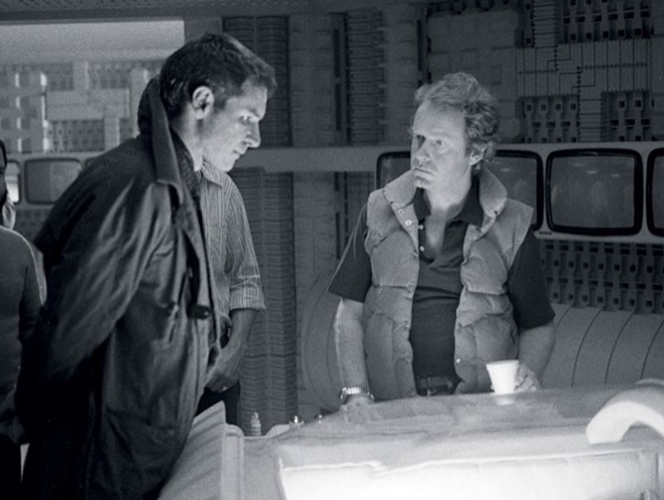 Blade Runner is one of those movies that you can watch multiple times and still see something new. Sci-fi fans have been pouring over the details of Ridley Scott’s masterpiece for decades, and the release of Blade Runner 2049 in 2017 only reignited people’s interest.

But despite being considered a true classic, Ridley Scott (pictured above with star Harrison Ford) was not always popular on set, with both cast and crew becoming frustrated with his perfectionism. 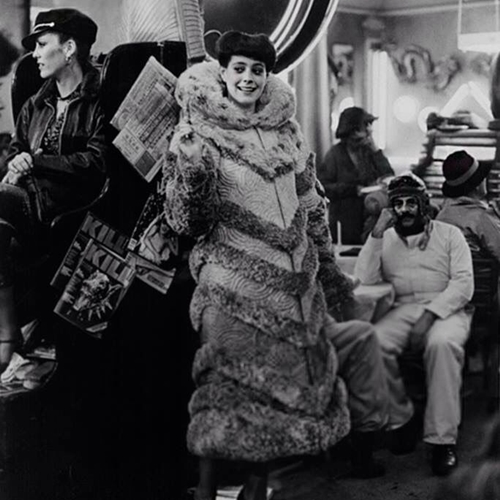 Here is the beautiful Sean Young, who of course played replicant Rachael, and Young’s relationship with Harrison Ford was another strained one.

In fact, it got so bad that the crew referred to their love scene as ‘the hate scene’! 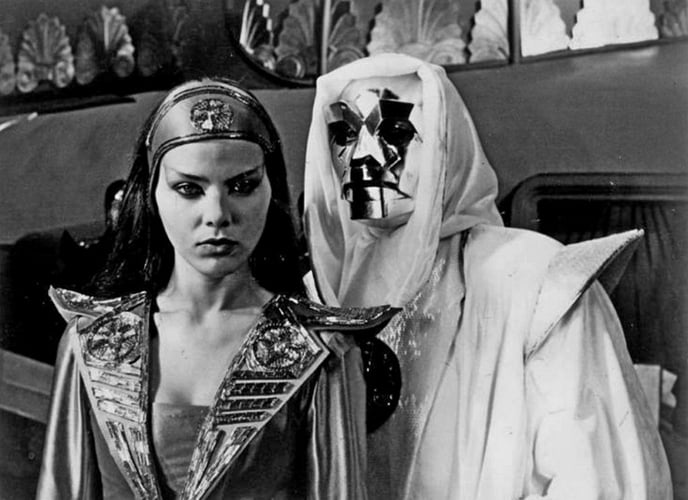 Despite the fact that it was a box office failure elsewhere, the 1980 Flash Gordon film was a big hit in the UK. Perhaps it was because we ‘got’ the camp humour, or perhaps it was down to our love of the rock band Queen, who of course supplied the films iconic soundtrack.

The film certainly featured some amazing costumes, and above are Ornella Muti and Peter Wyngarde displaying two of them. 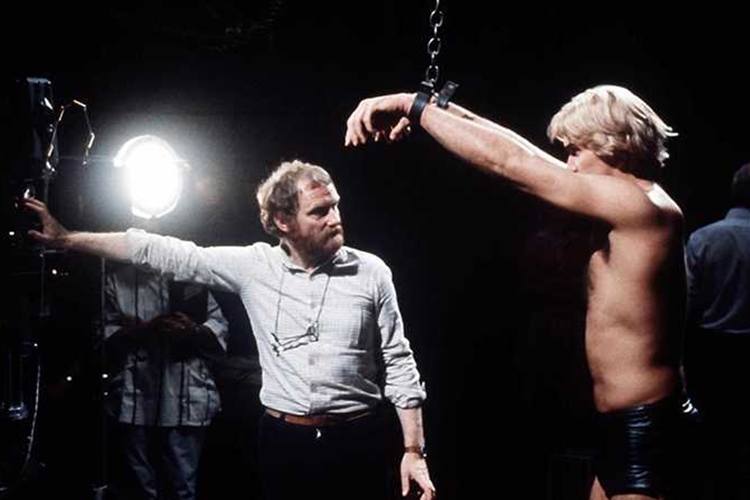 Here is a great behind the scenes photo of Flash himself, played by Sam J. Jones, and director Mike Hodges, but did you know that Jones actually left the film film before production had finished?

This was due to disagreements with the film’s producers, and it meant that a large amount of his dialogue was re-dubbed by a voice actor whose identity has never been revealed!

Return Of The Jedi 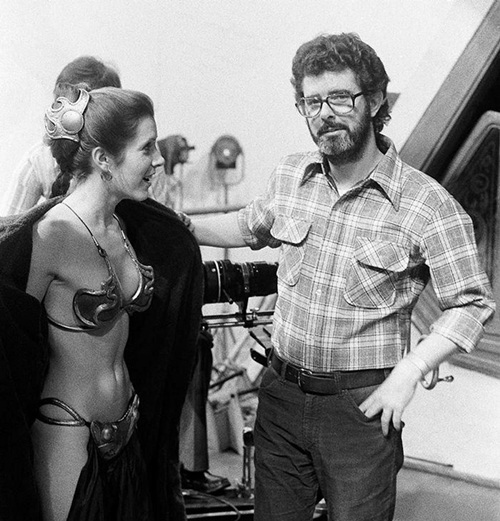 Here is Return of the Jedi’s producer (and also its rumoured but not credited director, but that’s another story) George Lucas, alongside Carrie Fisher in her famous Jabba’s Palace slave outfit. But did you know that the film could have been directed by David Lynch or David Cronenberg?

Lucas met with Lynch who had just had a critical hit with The Elephant Man. He showed initial interest but declined after the meeting. Lucas also approached David Cronenberg but he wanted to focus on more personal projects, and thus declined. 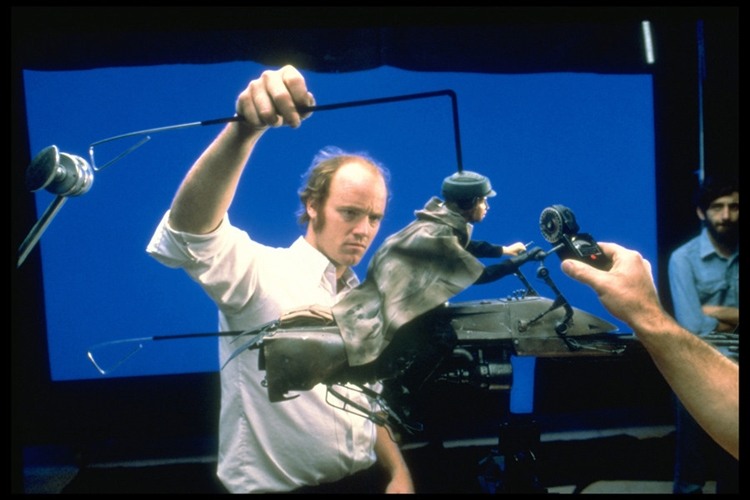 Return of the Jedi did of course feature some state of the art special effects, and here’s an amazing photo of the technical whizzes setting up a shot for the Endor chase sequence. 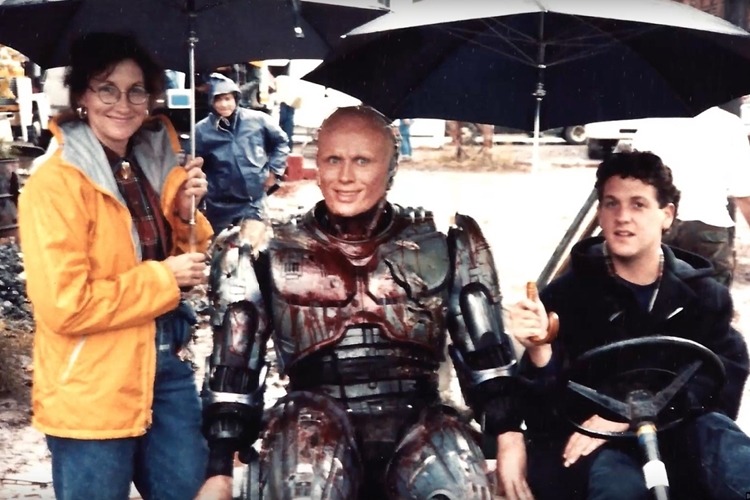 Whilst you probably can’t imagine anyone but Peter Weller in the role of RoboCop, have you ever wondered why a big name actor wasn’t given the part?

Before Weller was cast, Rutger Hauer or Arnold Schwarzenegger were favored to play RoboCop by director Paul Verhoeven and the producers. However, each man’s large frame would have made it difficult for either of them to move in the cumbersome RoboCop suit, which had been modeled on hockey gear and designed to be large and bulky. 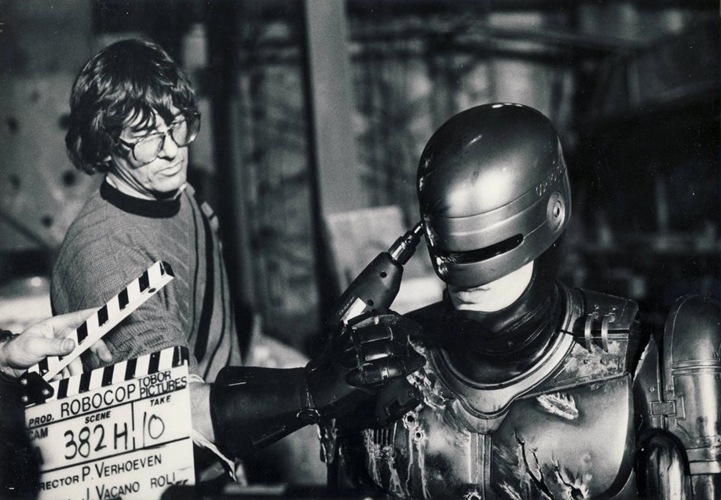 Here we have a brilliant photo of Weller’s RoboCop helmet literally being screwed onto his head before the 10th take of scene 382H. RoboCop had some amazing special effects, but do you remember how great the sound was too?

It actually won the Academy Award for Best Sound Editing, along with nominations for Best Film Editing and Best Sound Mixing. 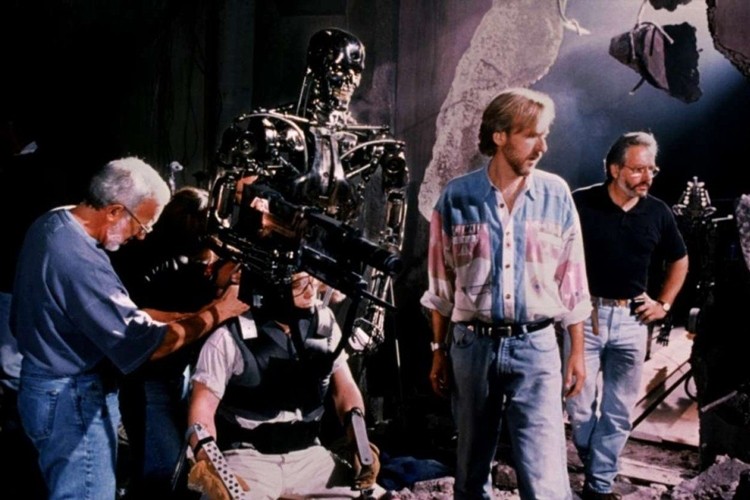 Here we have James Cameron again, alongside special effects legend Stan Winston operating the top half of the Terminator.

According to an interview with Lance Henriksen, James Cameron was living in his car when he wrote the script for the film. He didn’t even have an agent because he had fired him for not liking the story he had conceived for The Terminator! 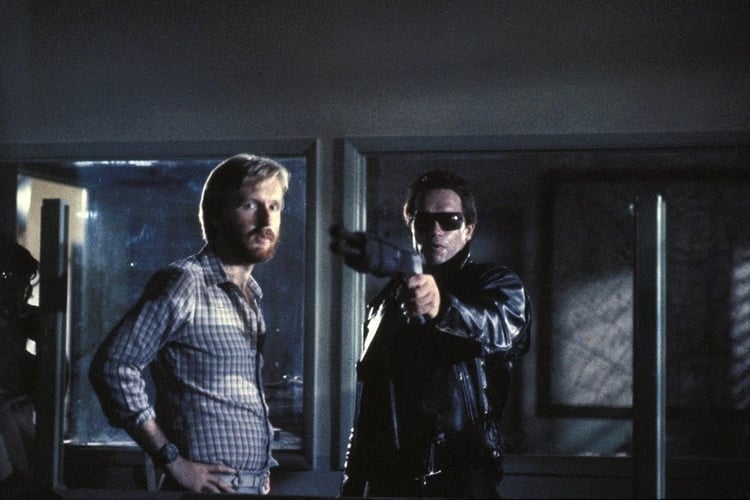 Filming of The Terminator was actually delayed for nine months because Arnie already had a commitment to Conan the Destroyer. During this wait, James Cameron wrote a little film that we’ve already featured called Aliens.