Basically a 2 and a half hour car chase movie, with some hilarious scenes and some wonderful musical moments that really help it move on well and make it totally rewatchable!

The first film that introduced us to the Griswald family as they made their way on a road trip to Walley World theme park. A crazy film with some great moments.

Who would have thought that Eddie Murphy and Dan Aykroyd would make such a perfect double-team bouncing perfectly off each other in the scenes they share together in this great film that always raises a smile! 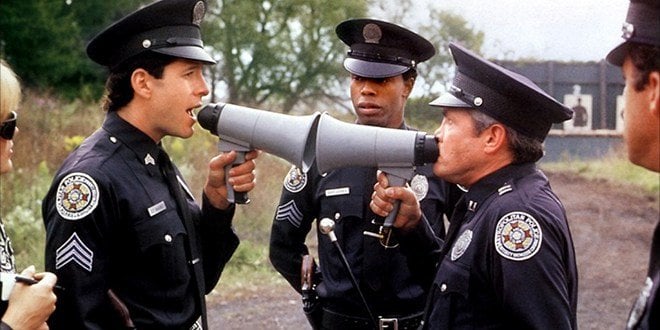 The start of a series that would end up running for 7 films, some a lot better than others and the final installment basically being awful! But this one was great and at the time was very fresh and new!

The film in which two nerds wear bras on their heads as they create their perfect woman on their home computer and make her real, then the ride really starts in this great comedy film!

Following one lad who feels that life moves too fast, so you have to stop every once in a while to take a look. He takes a day off school with his girlfriend and his best friend and has a day in the city – one of the best 80s films!

The story of a business man who finds himself thrown together with a shower curtain ring sales man on his journey home, and it does not go well! A great family comedy that has really stood the test of time.

The spoof version of Star Wars directed and written by Mel Brooks, it is farcical, but has enough references to keep the fans happy and sends up other sci-fi films like Alien perfectly, too!

The tale of three bachelors who find a baby on their door step and then have to try and learn to take care of her, all three of them falling in love with the little tot in the process!

A darkly comic film, that sees a couple tragically killed at the start of the film and then how they cope as ghosts seeing their nightmare family moving in to their home and turning to the titular Beetlejuice for help – big mistake!

The story of two con men, Steve Martin and Michael Douglas, who work together perfectly on screen as they try and con a woman and the lengths they’ll go to!

This film sees two families sharing a cabin and having a family holiday which they are largely unequipped for, especially when it comes to removing bats and bears from their house, and eating a 96 oz. steak!

From the files of Police Squad! This saw the start of a wonderful and hilarious trilogy that is as funny now as it ever was. One of the most re-watchable comedies of the era!

Who would ever have thought at that time that Arnie would try his hand at comedy, and that he would be so successful, playing Danny DeVito’s twin brother?!

Which is your favourite comedy film of the era? Have we missed it off the list? Let us know all of your thoughts in the comments as always!