13 Movie Scenes That Scarred A Generation Growing Up – How Many Had You In Tears?

Some movies stick with you forever and become a fond memory that you love to look back on. Some movies, however, especially when you’re growing up can scar you for life, usually with one particular scene that has every kid in tears or screaming and adults trying to be brave and hold it back (except my Mum – see entry number 3 on the list!)

We look back at select scenes from when we were growing up that have stayed with us well beyond our childhood and teenage years. How many of these do you remember, and how many left you sad or scared well after the end credits rolled? Let us know in the comments as always!

** Warning – if you haven’t seen these films, this does contain some spoilers! **

This was many kids’ first experience of loss and genuinely hard to watch. The cinema ended up as a mass of blubbering tears when Littlefoot’s Mum died after taking on a T-Rex in what proved to be a fight to the death. This is one of the most moving moments in an animated film outside of Disney!

2. “Somewhere Out There” – An American Tail

Feivel the mouse gets seperated from his family when they are coming from Russia to America. This film is the story of his journey to get back to his family, but the most moving part of the film is when Feivel and his sister sing to each other, not knowing where each other are, instead singing to the same moon in the sky. 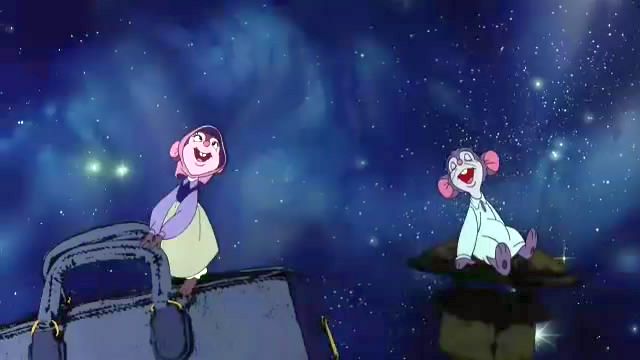 3. Two-socks gets shot – Dances With Wolves

Dances With Wolves was an amazing film and by far Kevin Costner’s most powerful performance. During the film he befriends a wild wolf who he affectionately names Two-socks, but Two-socks is sadly shot by some nasty soldiers. When seeing this, my family went together but there were quite a few of us so my brother and I had to sit seperate to the rest – at the point where the shooting takes place I heard my mum on the other side of the cinema shout “They’ve shot his dog”! So glad I wasn’t sat with her!

This one genuinely affected me as a kid! Atreyu’s beloved horse, Artax gets caught in a bog and starts to sink. This is an incredibly distressing scene, especially because it was filmed so effectively. I struggle to watch this scene even now and Atreyu’s emotions are all too realistic!

5. The shoe gets “dipped” – Who Framed Roger Rabbit?

In a suddenly shocking scene, when Judge Doom wants to explain his “dip” to Roger and Eddie he finds a lone shoe cartoon and picks it up, slowly melting and killing it in the dip in a scene that makes you wince!

Transformers: The Movie is an amazing animated film, with massive battles and a fantastic 80’s Pop/Rock score. It also left a big hole in my life after killing off one of my all-time heroes right at the start of the film! Optimus Prime was one of the ultimate good guys and so to take him away like that was devastating and really upset me as a kid!

7. Cooper and Todd Fight – The Fox And The Hound

After being the best of friends in their childhood, the dynamics of Todd and Cooper’s relationship are very different as an adult, culminating in them having a nasty fight that makes you not want to even look at the screen as you just want them to be friends again!

Elliot’s adventure to help his new-found friend E.T get home to his family sees the government trying to seize E.T. When he is captured, E.T dies and I defy anyone not to watch this without a massive lump in their throat! Very moving and Spielberg at his best!

One of the most powerful and well-acted films of a generation, Stand By Me is the ultimate in coming of age movies, and has more than one moment that could easily have made it on to this list, but I’m only selecting one scene per movie on here. The film hinges on the boys’ search for a dead body, and ultimately they find it. It’s not the adventure they thought it would be on finding the body though, and it becomes incredibly moving and subdued, as the boys show they clearly weren’t mentally ready for what they were undertaking.

Short Circuit is such a good-fun film, and Johnny 5 becomes a real character that you fall in love with and want to share the adventure with. At the end of the film, there is a big chase and Johnny 5 is seemingly blown up, devastating a cinema full of kids! The fact that he wasn’t really dead didn’t matter too much – the damage was already done!

Ferris Bueller’s day off is a fantastic and funny film, with Matthew Broderick starring as the titular character in one of the most entertaining films of the generation. However, towards the end his best friend Cameron takes the frustrations of his (suggested to be) abusive dad out on his dad’s car, kicking it and breaking the light. He’s mortified by his actions but deals with it until the car then reverses out of the garage and in to the wood below. Cameron’s shock and fear is palpable though he soon realises he may also be sensing freedom for the first time too. Very poignant and moving and very well acted.

12 – The Baby Alien tries to rebuild – Batteries Not Included

This film is much more unsettling when watched back as an adult, as you realise that Jessica Tandy’s character is clearly suffering from some kind of condition similar to Alzheimer’s and as a kid you just think she’s old and forgetful, so this film is genuinely sad to watch now – if you haven’t seen it recently I suggest you do!

However, the scene in question that I remember from being a kid is after the building is ruined, and the aliens have disappeared, the one little alien left that originally came without batteries, tries to start putting it back together, one tiny piece at a time. Very moving and makes you feel close to tears even now.

I’ve saved the best/worst for last. An amazing film that can be watched over and over again, but with a scene that will make you cry. Every. Single. Time. The stampede of wildebeest that culminate in Simba’s dad being trampled is so moving, especially when you think he’s going to make it out but then Scar sends him falling in to the midst of the stampede again. When Simba tries to wake his fallen father it’s simply too much and many a snort will be heard as people try in vein to hold back those tears. There’s no point, just let them flow!

So how many of these can you relate to? How many affected you so much as a kid that you can still remember them today? How many have you struggled to watch again since as a result? Let us know in the comments!