These 10 Facts About Howard The Duck Are Quackers

Today, comic label-turned-movie studio Marvel completely dominates the box office, but they didn’t get off to the most auspicious start. 1986 saw the release of Howard the Duck, the first theatrical film based on a Marvel comic book, and produced by no less than Star Wars and Indiana Jones creator George Lucas. Alas, the result was somewhat less than a blockbuster…

10. George Lucas wanted to make the film before Star Wars 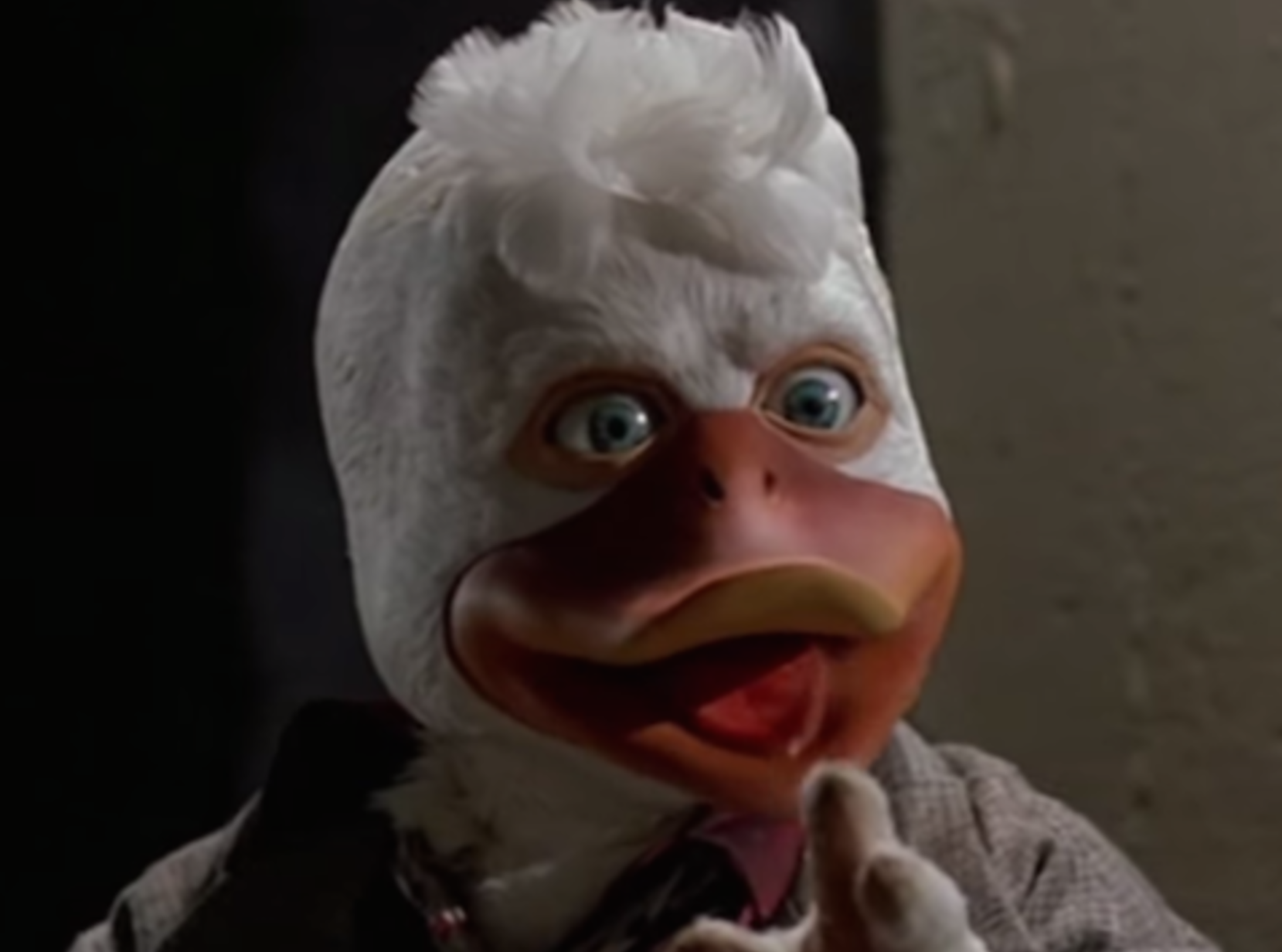 The character of Howard the Duck was created in 1973 by Marvel writer and artist team Steve Gerber and artist Val Mayerik. That same year, writer-director George Lucas had a hit with his breakthrough film American Graffiti.

Lucas was a fan of Howard the Duck right away, and discussed making a movie based around the character with his American Graffiti co-writers Willard Huyck and Gloria Katz. However, the project took a back seat as Lucas instead concentrated on his sci-fi adventure film Star Wars.

9. The film was originally going to be animated 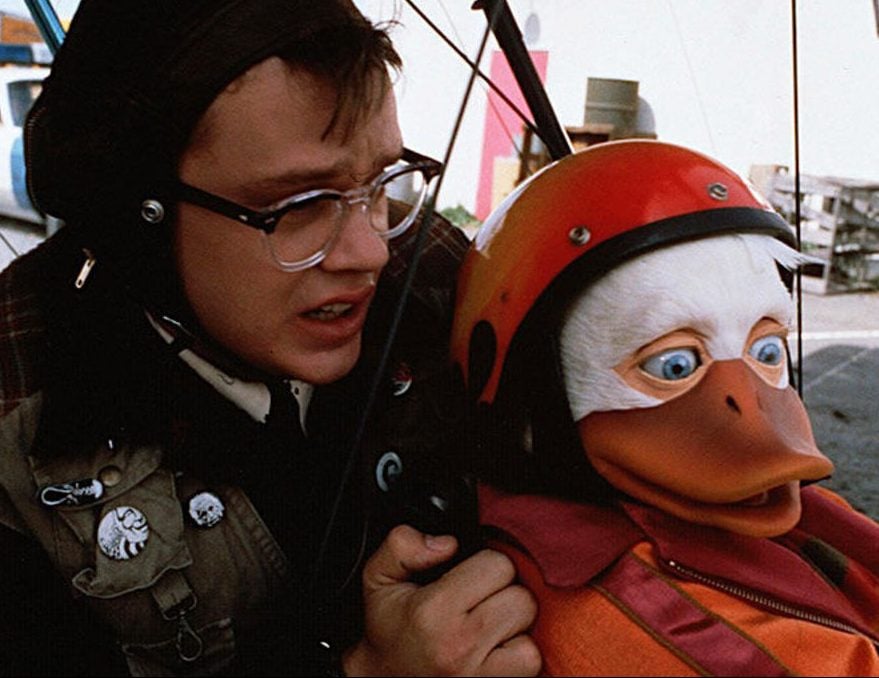 Lucas, Huyck and Katz initially struggled to get Howard the Duck off the ground, but by the early 80s after the huge success of the Star Wars and Indiana Jones movies, Lucas’ name alone was enough to get the project into development at studio Universal.

However, compromises were made straight away. Originally the filmmakers had hoped to make it a full-length animated movie, but this was considered too expensive and time-consuming.

8. The studio made the filmmakers explore Howard’s origins in the movie 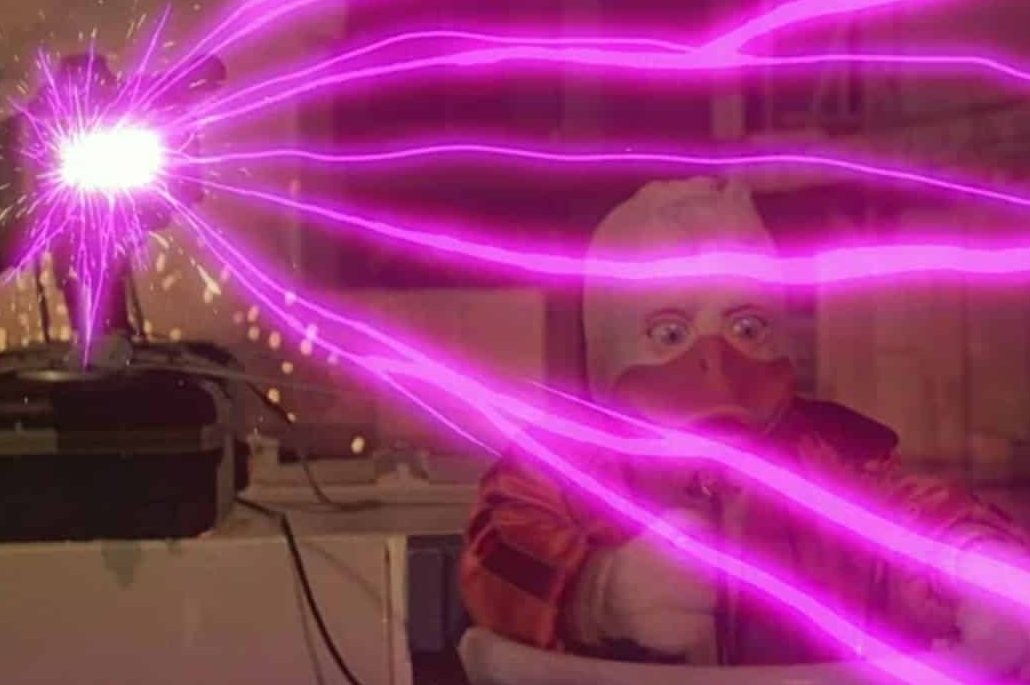 The Howard the Duck movie revolves around the title character being mysteriously transported from his home on ‘Duckworld’ to far-off Earth, and then follows his efforts to get back home. However, this was not what the filmmakers had originally intended.

Co-writer and director Willard Huyck recalls their original script “had Howard as a private eye in Hawaii, and the audience would just have to accept that as normal, but the studio said, ‘No, you have to explain how he got here.'”

7. Howard was originally going to be created with CGI 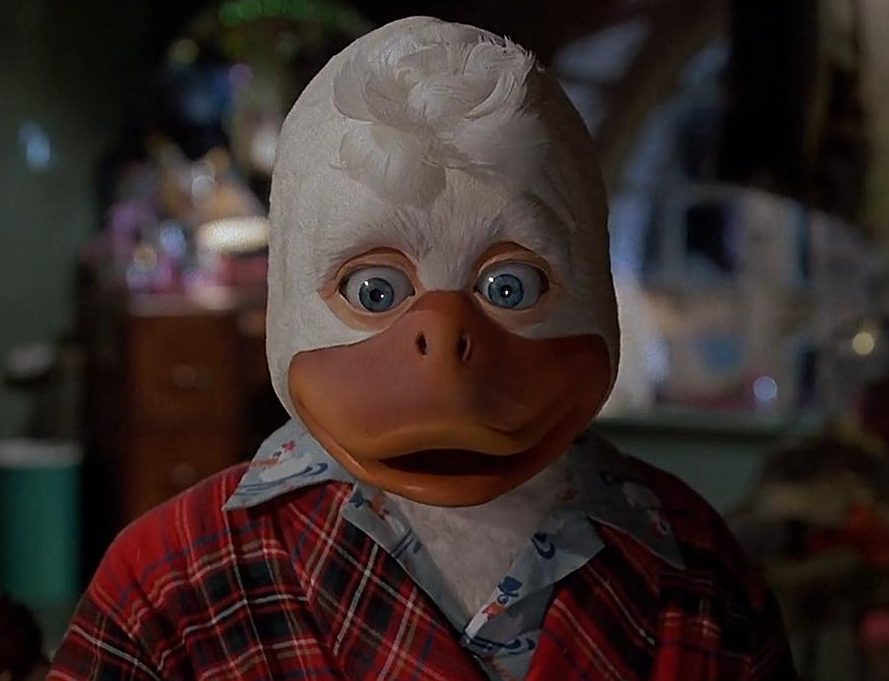 In what would have been a pioneering move, Howard the Duck was initially intended to be an early showcase for CGI. Animators at Lucas’ special effects company Industrial Light & Magic planned to bring Howard to life digitally.

Unfortunately, early tests proved unsuccessful. After this, the team planned to use a puppet, but this approach also failed. Finally it was decided the best approach was to cast dwarf actors Jordan Prentice and Ed Gale, and put them in a suit, with several puppeteers controlling the facial expressions.

6. Lea Thompson had to spend two hours getting her hair done every day 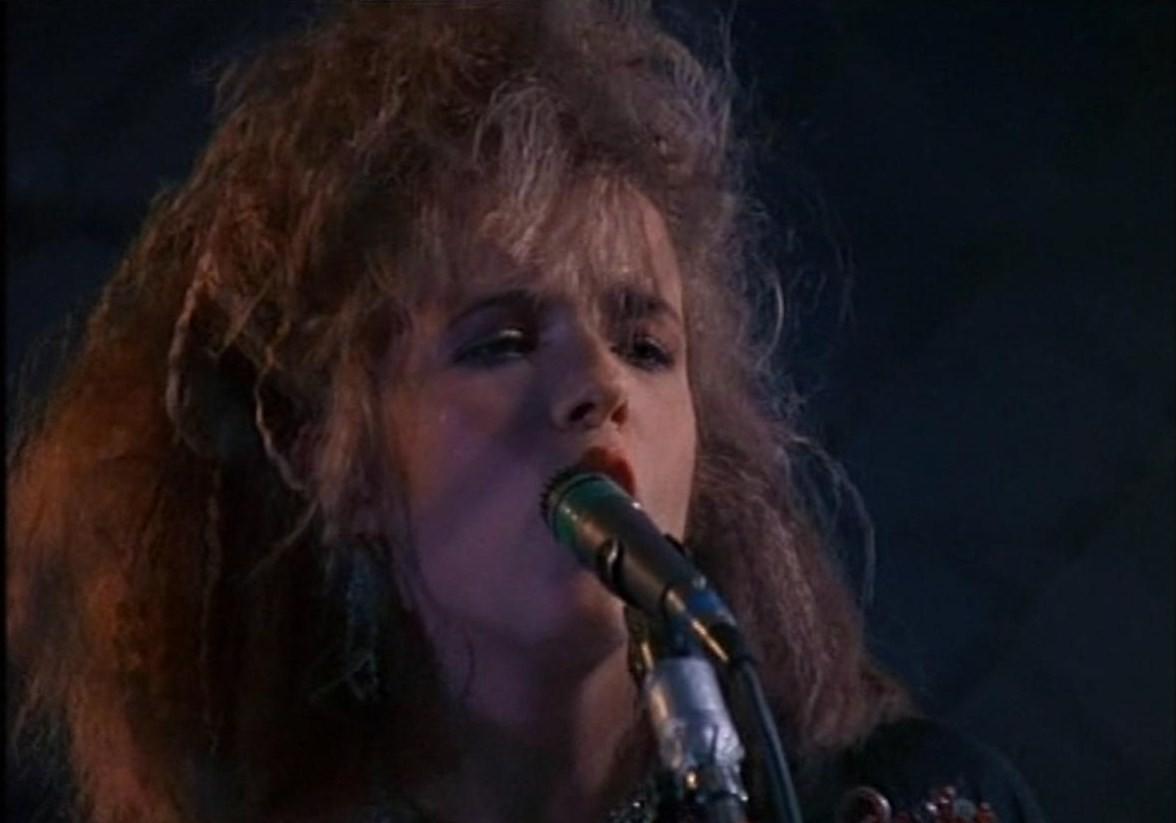 As new wave rocker Beverly, Lea Thompson (who came to Howard the Duck fresh from mega-hit Back to the Future) sports eye-catching big hair that absolutely screams ‘the 80s’. The actress later expressed regret that she didn’t wear a wig for the role, as she had to spend two hours getting her hair styled that way every day of the shoot.

Thompson’s demanding schedule also included vocal training (she does all her own singing in the film) and learning to play guitar, which was completely new to her. 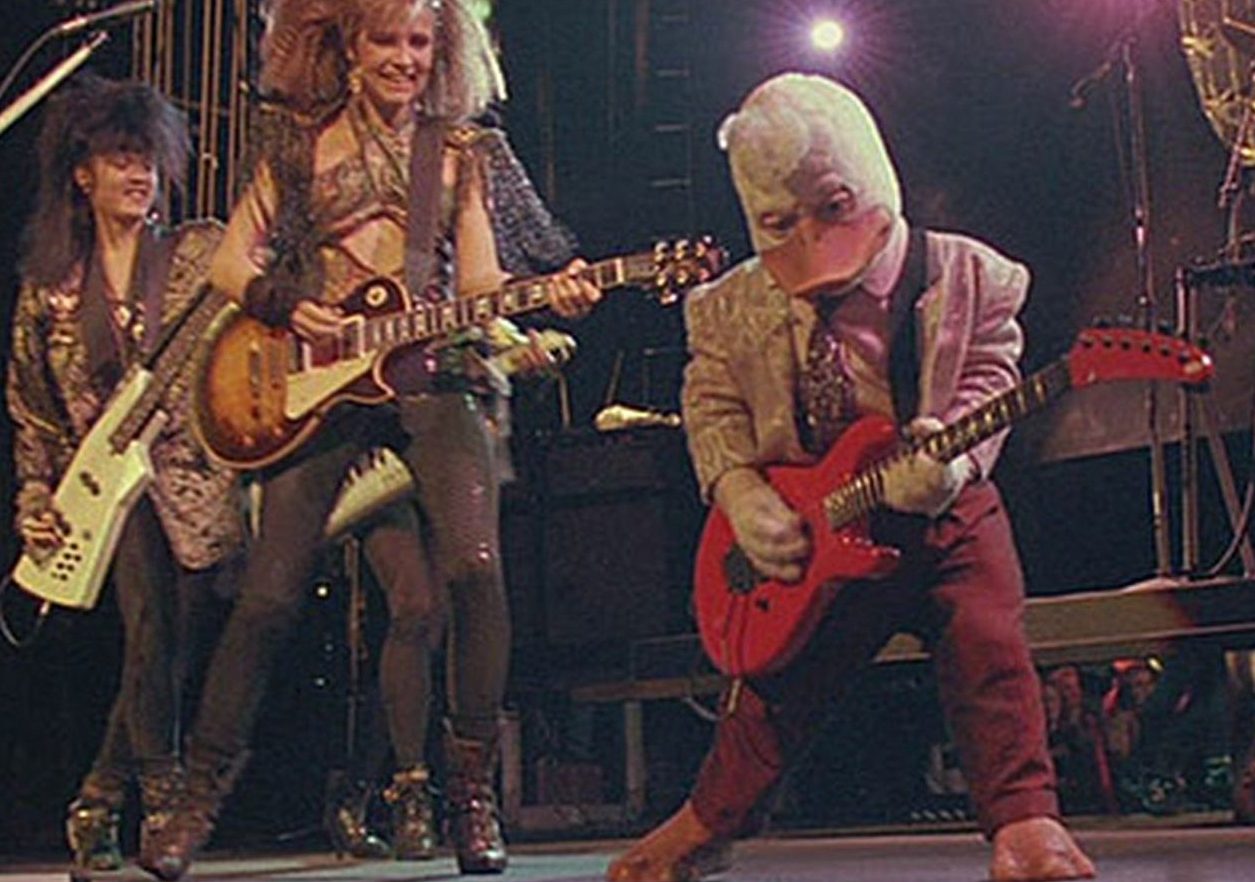 The songs for Beverly’s rock band Cherry Bomb were written by Thomas Dolby, synth-pop musician best remembered for his early 80s hits She Blinded Me with Science and Hyperactive!

The film’s title song Howard the Duck was co-written by Dolby and George Clinton, of legendary funk bands Parliament and Funkadelic. 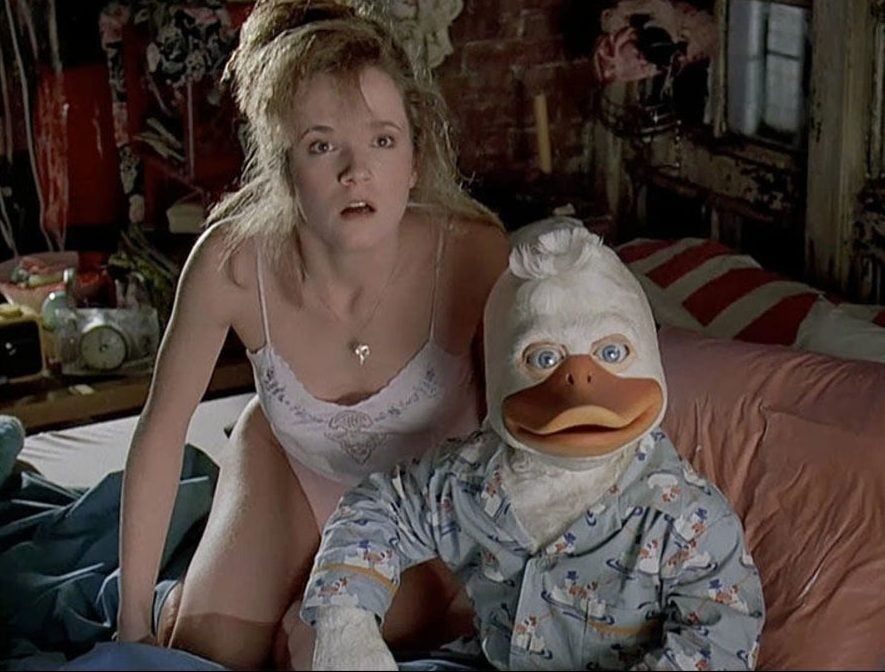 Many scenes feature actor Jordan Prentice (later seen in Mirror Mirror and In Bruges) as Howard. Prentice was only 12 years old at the time, and for this reason Lea Thompson was dead set against him acting in the later controversial scene which features Howard and Beverly sharing a bed.

Prentice himself recalls, “I didn’t care whether or not I did that scene, but my guardian was really against it.”

3. It was a critical and commercial disaster 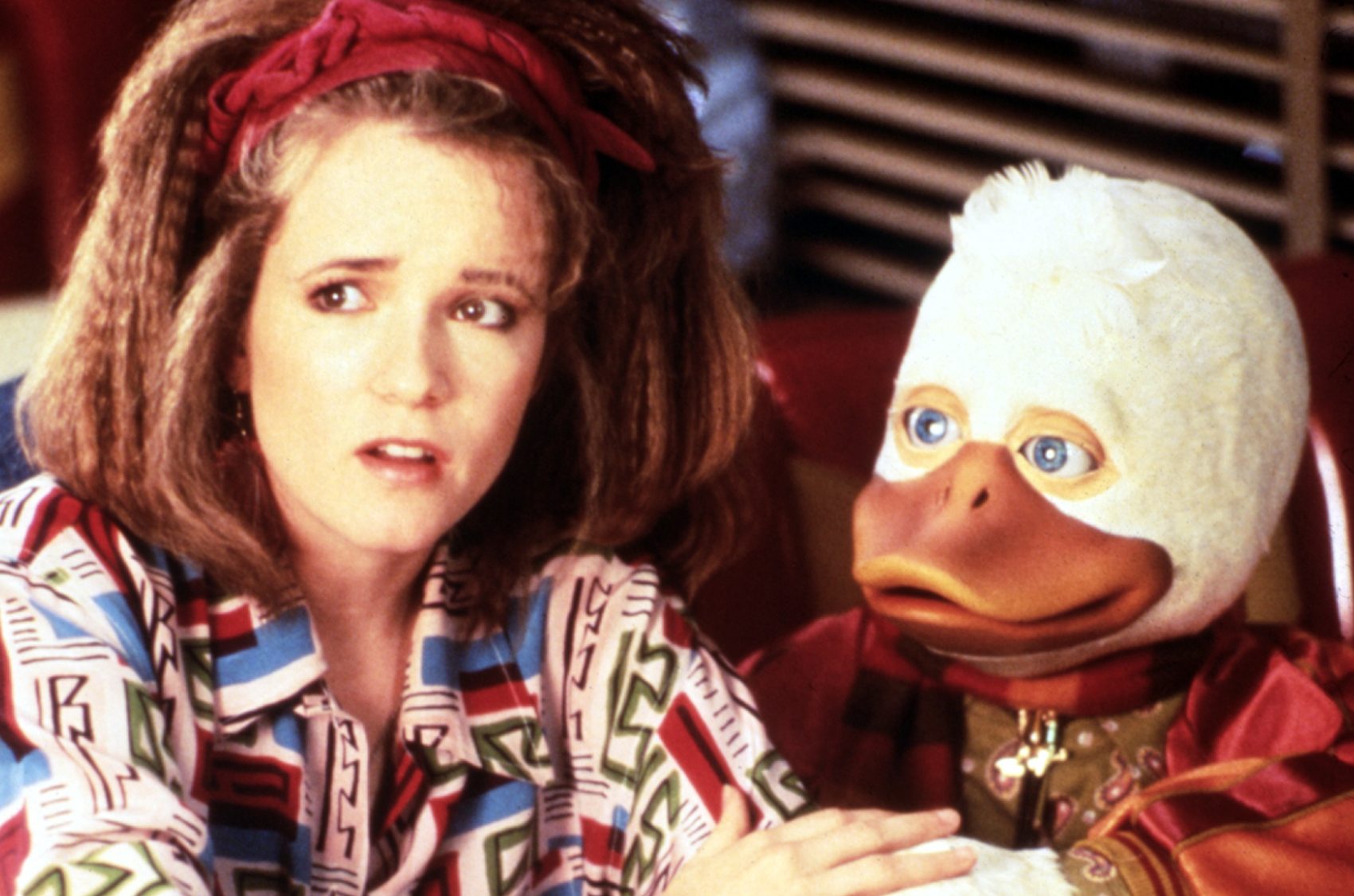 Howard the Duck reportedly cost around $37 million to make, a huge sum of money for a movie at the time. However, the film was met with a less than enthusiastic response.

Released to US theatres in August 1986, Howard the Duck wound up earning only $16 million domestically, and was widely savaged by critics.

2. The film’s overseas marketing erased any mention of the hero being a duck 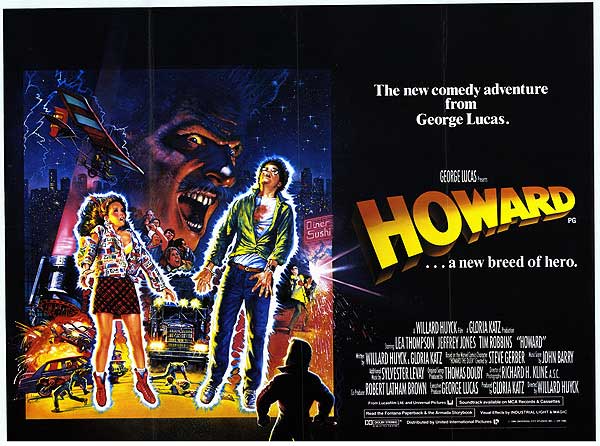 After Howard the Duck bombed hard on its home soil, Universal anxiously attempted to boost the film’s potential worldwide by changing the title to Howard: A New Breed of Hero, with new marketing which all-but erased any hint that the film featured a talking duck.

This didn’t work. Ultimately the film grossed around $38 million globally, just barely recouping its budget but totally failing to make a profit.

1. Lea Thompson later became a character in the Howard the Duck comics 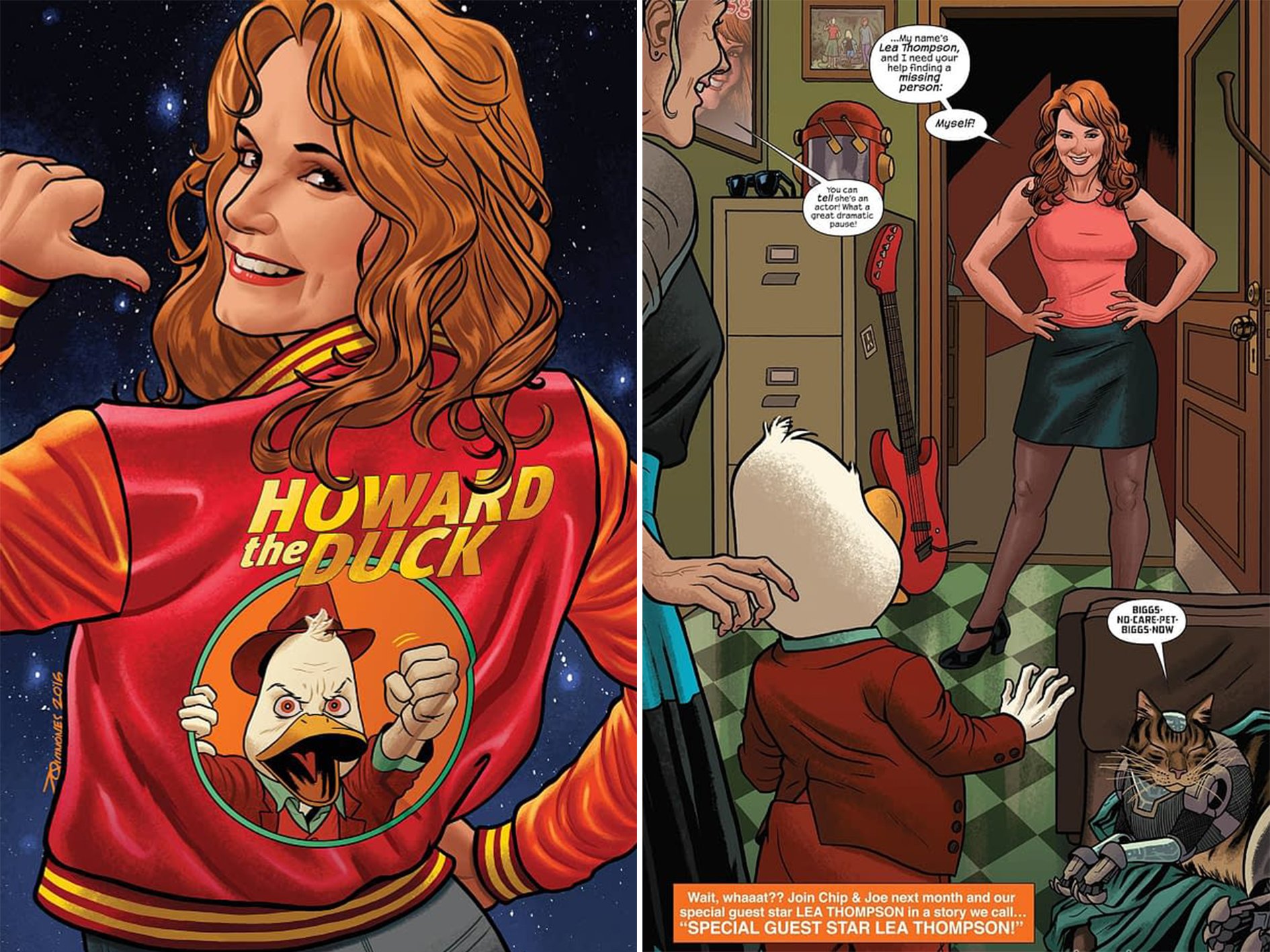 Over time, Howard the Duck has built a cult following as one of the greatest guilty pleasure movies of the 80s. In more recent years, some key figures from the movie have embraced this – notably lead actress Lea Thompson.

In a fun, meta twist, Thompson agreed to her likeness being used in a 2016 storyline in the Howard the Duck comics, in which the actress ‘appeared’ as herself.