12 Ways ‘Back to the Future’ Is Changed With Marty Using Social Media. 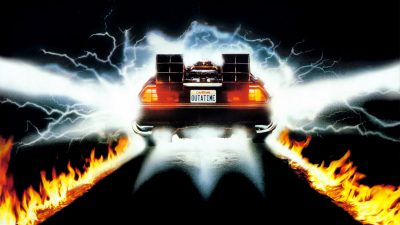 I fumble with a handful of loose change, the phone receiver perched on my shoulder as I inhale the near toxic fumes of urine in the phone booth, I finally scrape together the 10p I need to make the call home to tell my parents I’m on my way back for dinner, punch the numbers in and wouldn’t you know; no-body home. In the world of connectedness, it’s hard to recall those Saturdays I’d stumble home from a crazy teenage night out with friends, totally out of contact with my folks at home till the moment I walked through the door. Not today, all my exploits; for better or worse, would be catalogued, hashtagged and tracked on social media. Teenagers in the 80s had it best, technology and freedom; none more so than Marty McFly. Meeting up with random scientists in the back of a mall first thing in the morning, bringing the video recorder he requested as he has something to ‘show you’. Good times, but it would never happen today… perhaps that’s a good thing? 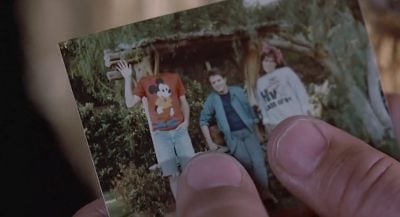 Not in a literal way, but it feels like it. Marty is so scared of being a failure, and the world online seems so angry he hardly ever leaves the house. Most of his time is spent indoors on the phone practicing Photoshop skills to make art for album covers and writing lyrics for his band. Nothing ever happens. The End. Takes selfies with scribbled notes of deep insightful ‘feels’ #schoolofrock 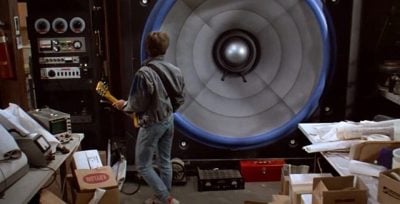 Ok assuming Marty is a little more engaged with life and through a ‘care for the elderly community’ app he is placed as a visitor for local eccentric: Doctor Emmett Brown. Marty turns up at the Doc’s (he isn’t home) and decides to test out some archaic new sound equipment. He sees a massive set of speakers, dials, displays, a lot of plugging in and set up; you have to use wires? Takes a selfie of the equipment #oldschool and posts to his account. Jennifer instantly DMs Marty on Snapchat and says how out-of-date all that junk looks and there is this awesome app you can get now to mix your own tracks. Marty downloads the app, feeds Einstein, gets to school on time and Strickland is none the wiser. 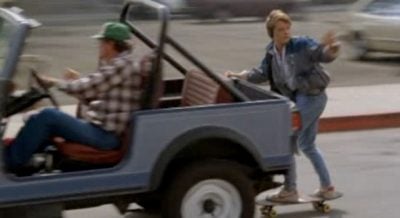 Ok, maybe Marty did use the equipment for “bants” or just decided to be late on purpose because he likes playing by his own rules but no sense putting your life in danger hanging off trucks on a skateboard. Call up an Uber, it’ll be there in ten minutes. Goodbye skateboard, arrive to school in comfort. Good thing George McFly set up a contract phone with TouchPay for Marty. Take a selfie #ubertoschool 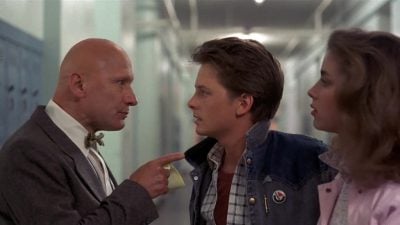 Marty used the equipment and clung for dear life off the back of trucks on his skateboard just to show off, he needs to avoid Strickland and those Tardy slips, ‘totes’ easy, his class mates just DM where Strickland is to Marty. OR they place a fake call to his office calling him away from patrolling the halls. Giving Marty time to sneak into class at the back, no one notices take a self #slackeratschool.  (Admittedly Strickland later finds out by getting a notification of this selfie and issues a Tardy slip anyway; nobody said Marty was smart.)

5. This Kids Got Future 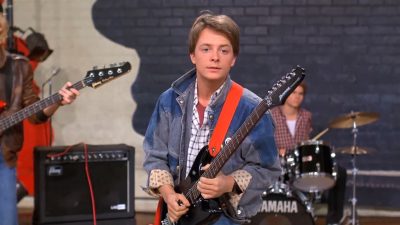 Everyone knows that today you aren’t famous for hard graft, playing at school discos or even ability. Record a session on your phone for the heavy filtered grunge look and post to YouTube, then set up a GoFundMe page to get the ball rolling to appear on a televised talent show. Making sure to chat with Uncle Jailbird Joey to get a nice sob-story for the voting portion of the show. The band takes a selfie outside the audition #noschoolbattleofthebands. 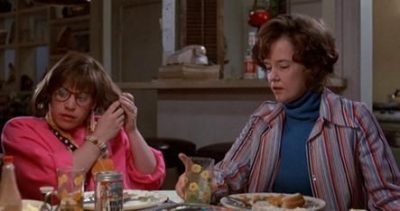 No need for a Sister to tell him over dinner that his girlfriend ‘left messages’, and Lorraine doesn’t need to know your girlfriend ‘calls a boy, chases boys or sits in parked cars with boys’. Just do all your flirting on WhatsApp with your phone under the table whilst you hear that story about the Fish under the Sea dance or something, whatev’s totally not listening. Why bother lying about “camping with the guys” when you can go Skype-ing. Invite Jen over to watch the latest Netflix show to fool your parents that you are being responsible with a ‘night-in’, then agree to Skype again once she gets her Uber home. Take a selfie #schooloflove 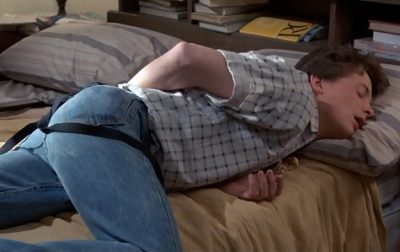 Martys phone buzzes, ignores it. It buzzes again, he looks at it,  a text message notification from the Doc. Its too damn late now. Marty is exhausted having binge watched those Netflix episodes and spent all night on Skype with Jennifer. He’ll call him back tomorrow and tell him you overslept. Take a selfie #schoolnight. Pass out. 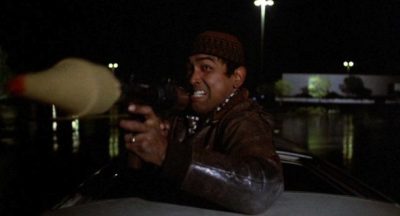 Heading over to the Doc’s house the next morning where a uniformed officer arrests Marty in connection with a known terrorist, he’s plied with questions for connections to this scientist who has had dealing with Libyan Nationalists who were stopped at border security having tracked their location data. He built some kind of radioactive vehicle for undetermined reasons and may face criminal charges, a trace on Doc’s phone showed the last message he sent was to Marty’s phone. Marty spends time in the county lock-up after he is released for a lack of evidence, and its clear from all his social media posts this kid is not the smartest; he takes a selfie outside the court house #schoolofhardknocks. This’ll be great coverage for the band’s ‘bad boy’ Instagram motif. It later transpires the Doc is made Head of NASA with a budget of billions and is responsible for some incredible leaps forward in technology . 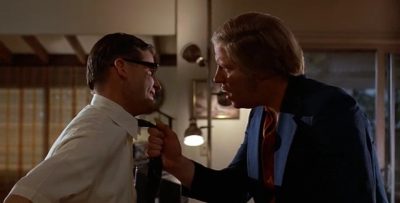 Marty gets home to find his Dad George has been awarded A LOT of money in compensation and damages as a Whistleblower after Marty showed him how to use a phone to record the abuse he received at work from Biff. George vows to use the money to improve things around the house, quit his job and do the thing he’s always dreamed of doing: becoming a writer. Anonymously, on a blog page of course, he doesn’t want rejection if he isn’t good enough. Marty takes a selfie with his meal at the expensive restaurant where the family are celebrating #Biffgotschool’d

10. No McFly Amounted to Anything? 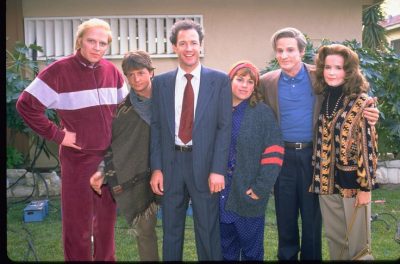 With some money behind them, the McFly kids follow their dreams. The Eldest goes to business school and now owns a chain of fast food stores across the country with a very smart online marketing strategy. The Daughter pursues her own brand health and fitness equipment and goes on tour with empowering literature to the women of the world. Hill Valley is put on the map. To honour the newly protected broken Clock Tower; Marty shoots a Western themed music video to celebrate the towns history. George has sponsored Biff through Anger Management rehab and the two now work together to highlight awareness of workplace bullying.  The McFly family take a selfie together when the local town decide to change the name of the school to the McFly Academy #SchoolofMcFly. 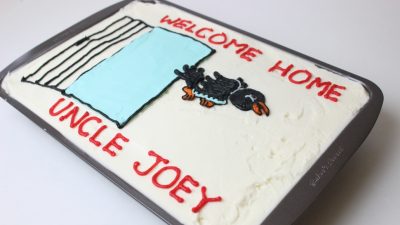 With her children successful and a husband coming out of his shell from following his passions, Lorraine uses her significant cake baking skills to open her own Bakery and now trains renowned chefs across the mid-west she takes beautiful selfies with her cakes which sell to the rich and famous everywhere, even making a cake that looks like a pair of boxers for Calvin Kline’s birthday! #CakeSchool 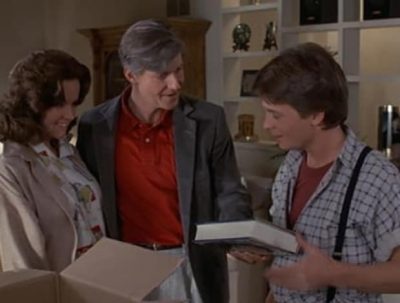 Turns out George is a magnificent writer as his latest novel “Gotta Go Back In Time” is a smart comedy sci-fi piece about a boy who has to go back in time in a cool super-solar powered electric car time machine to save its inventor who is murdered by terrorists for his invention. The boy, accidently, travels back to the 50’s until the solar power batteries are fully recharged. The younger counterpart of the inventor reverse engineers the time technology to invent the digital age early in a time-loop. Before leaving, the young boy ‘codes’ a notification to go off a month before he is due to be murdered telling him the tragic story of the night the boy went back in time. The boy returns to find that the inventor is alive and the next Elon Musk. Marty takes a selfie with his first copy #schoolofdaddio