Following up beloved 1984 classic Ghostbusters was always going to be a tricky job, and in the eyes of many 1989’s Ghostbusters II doesn’t quite pull it off. Yet while some feel it doesn’t live up to the original, the supernatural comedy sequel is in many ways an enjoyable film in its own right. With long-delayed third instalment Ghostbusters: Afterlife arriving soon, what better time to look back on Ghostbusters II with some facts you might not have known… 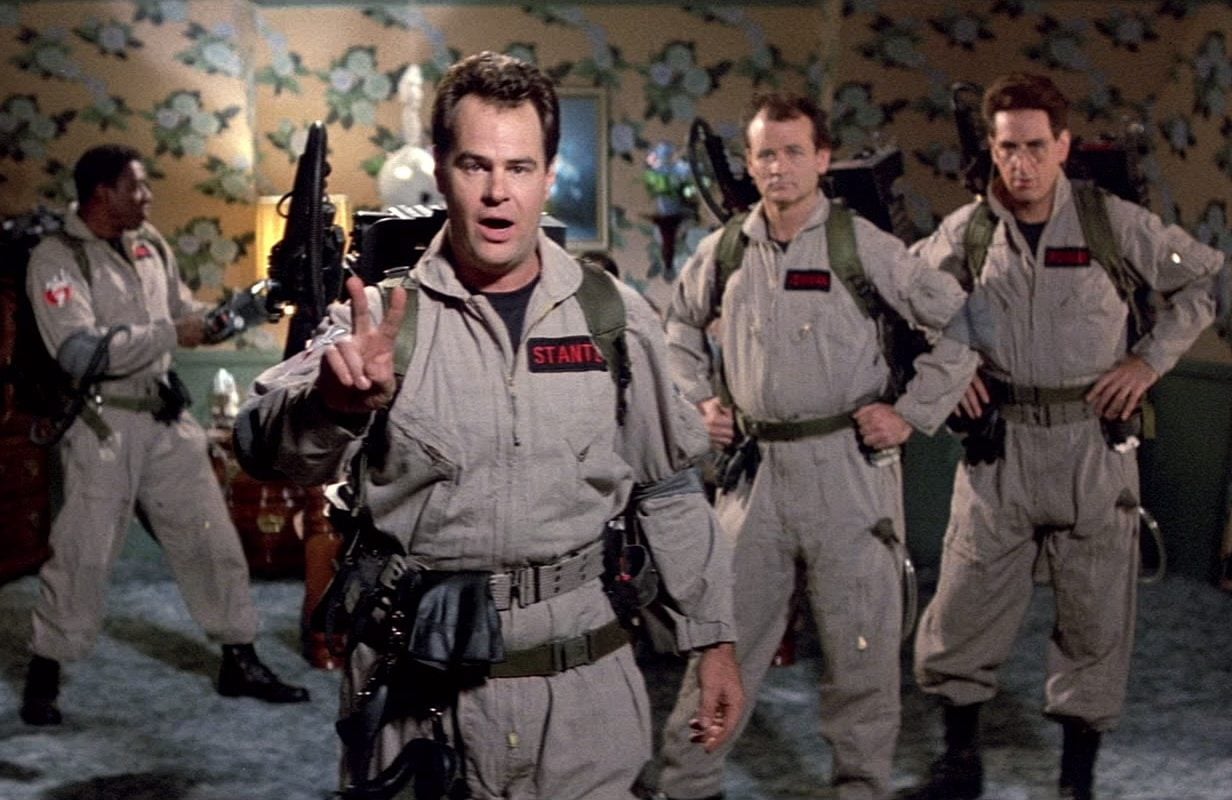 Early on in the development of Ghostbusters II, actor and screenwriter Dan Aykroyd was keen to make the sequel stand apart from the original by moving the action out of New York City. Aykroyd’s initial script involved Sigourney Weaver‘s Dana being kidnapped and taken to Scotland by subterranean fairy folk.

Eventually Aykroyd realised his vision was “far out… [and] too inaccessible,” so it was agreed that Ghostbusters II should be set in Manhattan like the first film. 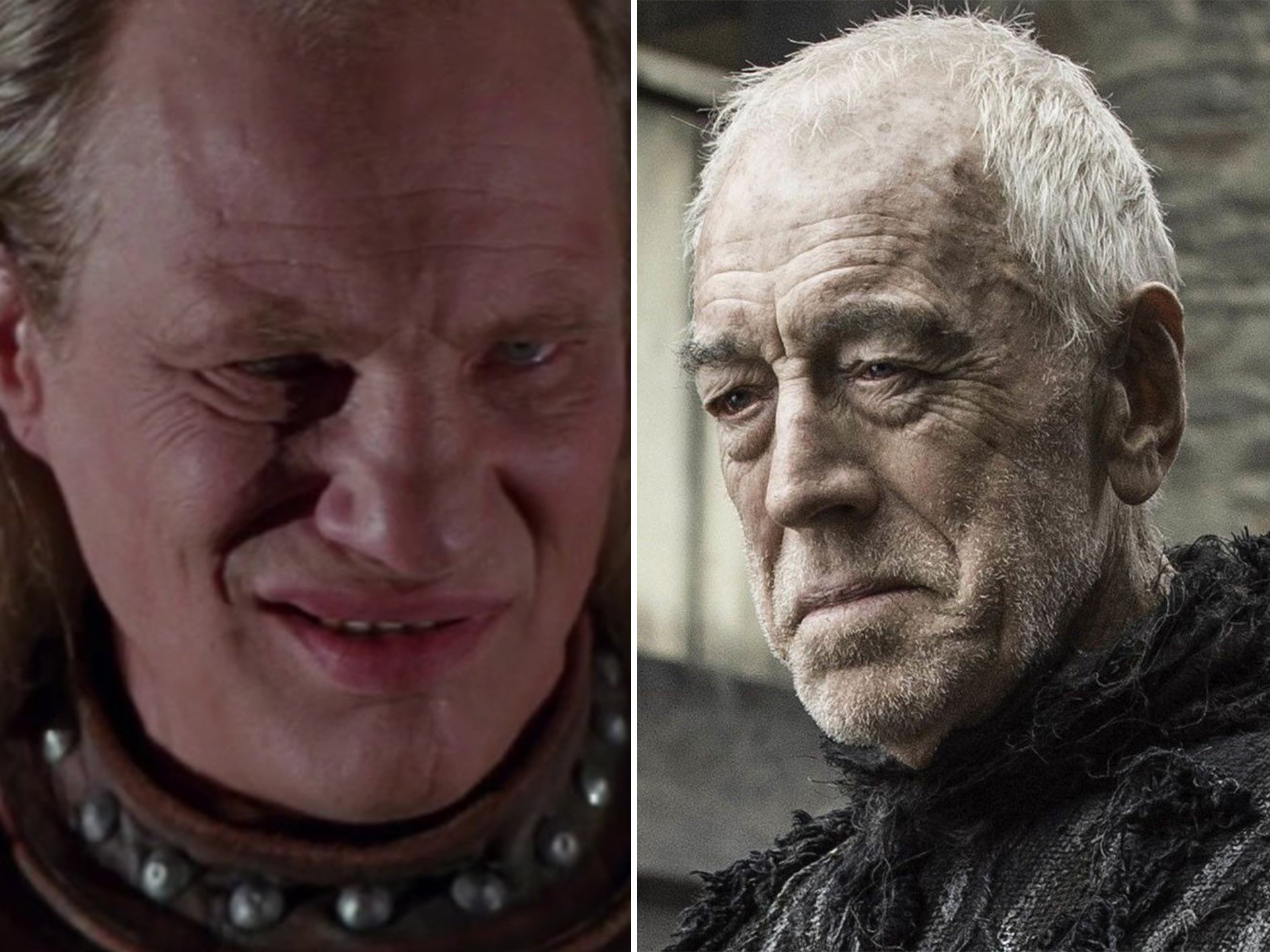 The supernatural antagonist of Ghostbusters II is Vigo the Carpathian, a brutal warlord whose spirit lives on through his portrait. This role is taken by Die Hard actor Wilhelm von Homburg – but the character’s voice was provided without credit by esteemed film actor Max von Sydow (The Exorcist, Flash Gordon).

Von Homburg was reportedly unaware that his dialogue had been dubbed over until the film’s premiere, which prompted him to angrily walk out.

8. Slimer was included and Janine was given a makeover because of The Real Ghostbusters cartoon series 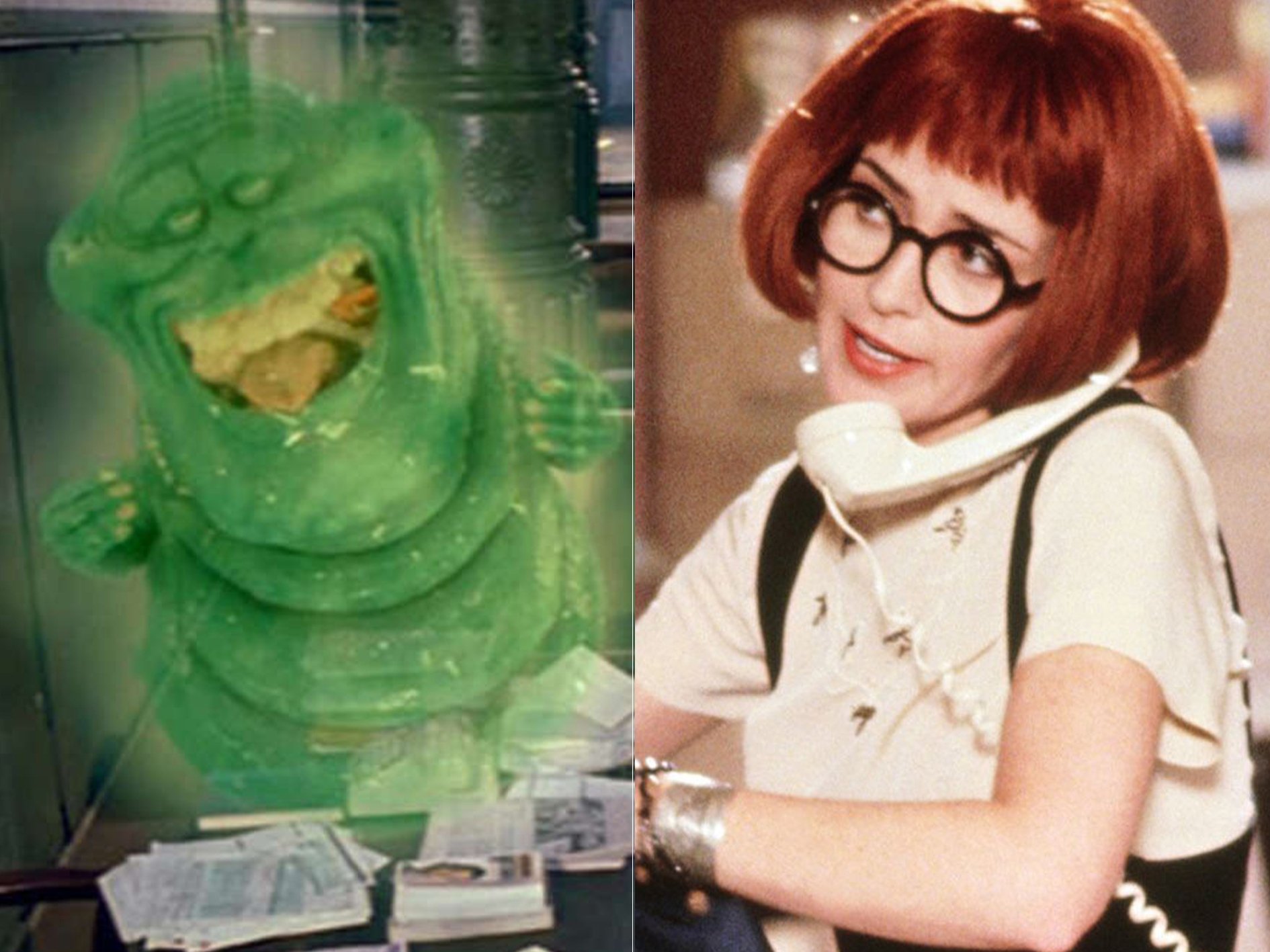 In the five years between Ghostbusters and Ghostbusters II, the characters had lived on in animated TV series The Real Ghostbusters, which was hugely popular with younger viewers. For this reason, the sequel features elements designed to appeal to young fans of the cartoon.

This included giving Annie Potts’ Janine a makeover with bright orange hair and a more lurid wardrobe. They also included a cameo appearance from the first film’s unnamed green ghost, who had since become a key cast member in the cartoon show named Slimer.

7. The Scoleri Brothers were modelled on The Blues Brothers 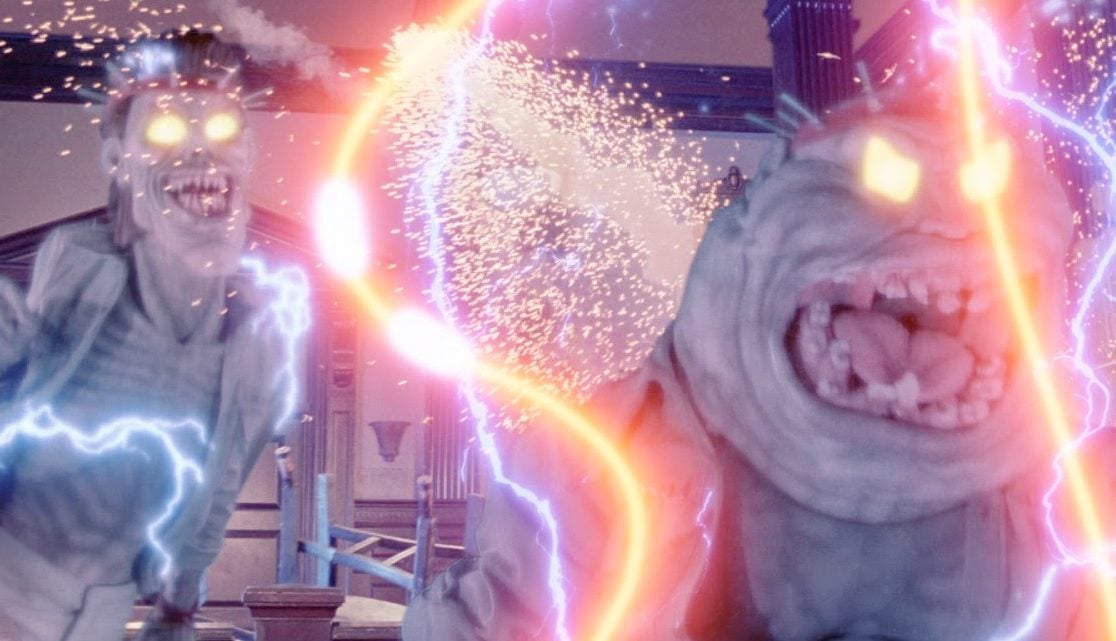 Two of the most memorable supernatural entities in Ghostbusters II are the Scoleri Brothers, the two electrocuted criminals who return from the dead in the courtroom scene.

If you’ve ever thought these ghosts looked vaguely familiar, it’s because they’re modelled on The Blues Brothers, the iconic characters played by Dan Aykroyd and his late partner John Belushi on Saturday Night Live and in the celebrated 1980 film.

6. The rude kid at the birthday party went on to be the director of Ghostbusters: Afterlife 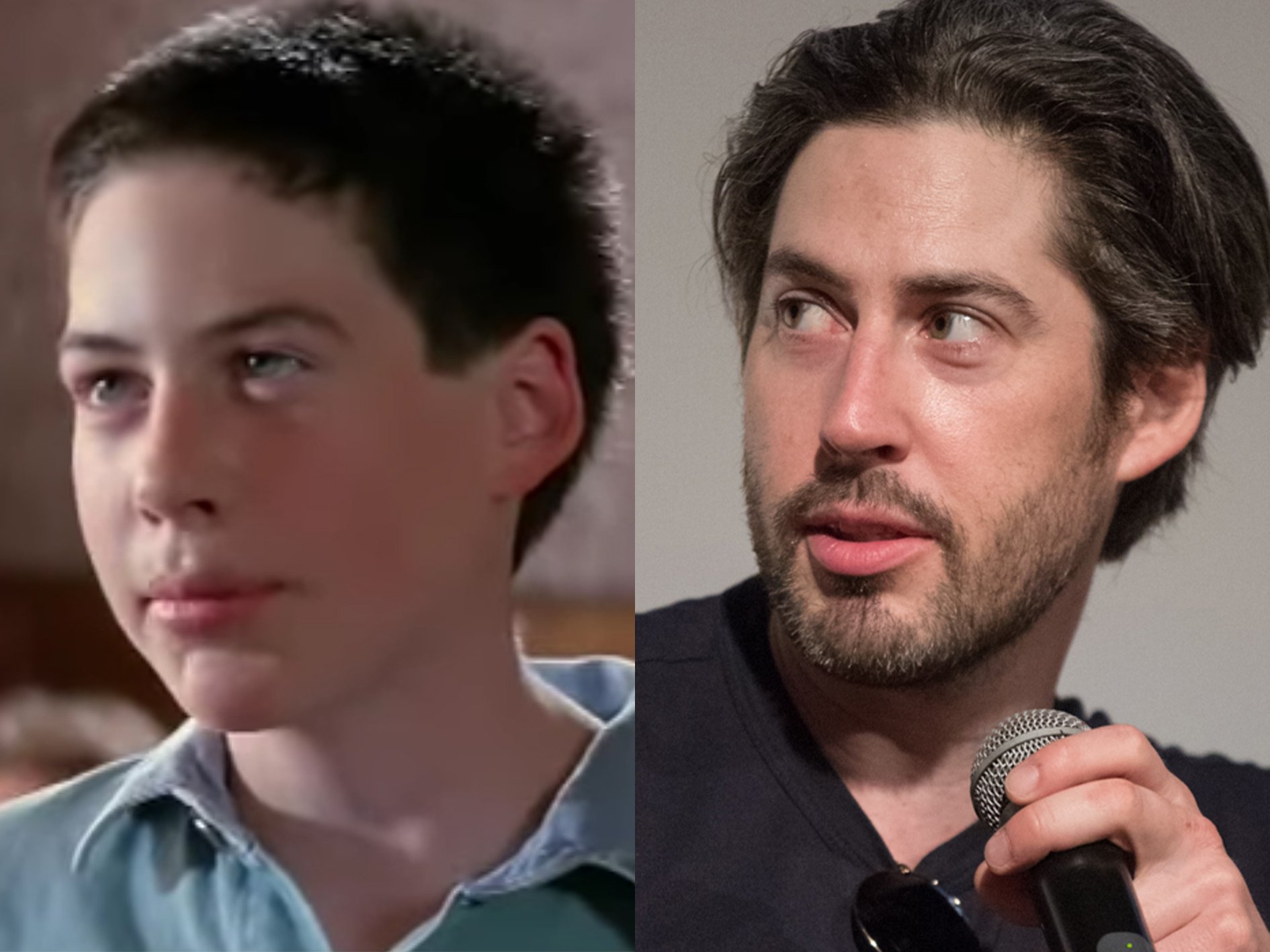 Early on in Ghostbusters II, Ray (Aykroyd) and Winston (Ernie Hudson) are appearing as entertainers at a kids’ birthday party. Here, an obnoxious youngster declares to their faces that they’re “full of c**p.” This child is Jason Reitman, the son of the film’s director Ivan Reitman.

Jason Reitman has gone on to become an acclaimed film director and a two-time Oscar nominee. He’s also the co-writer and director of the upcoming sequel Ghostbusters: Afterlife. 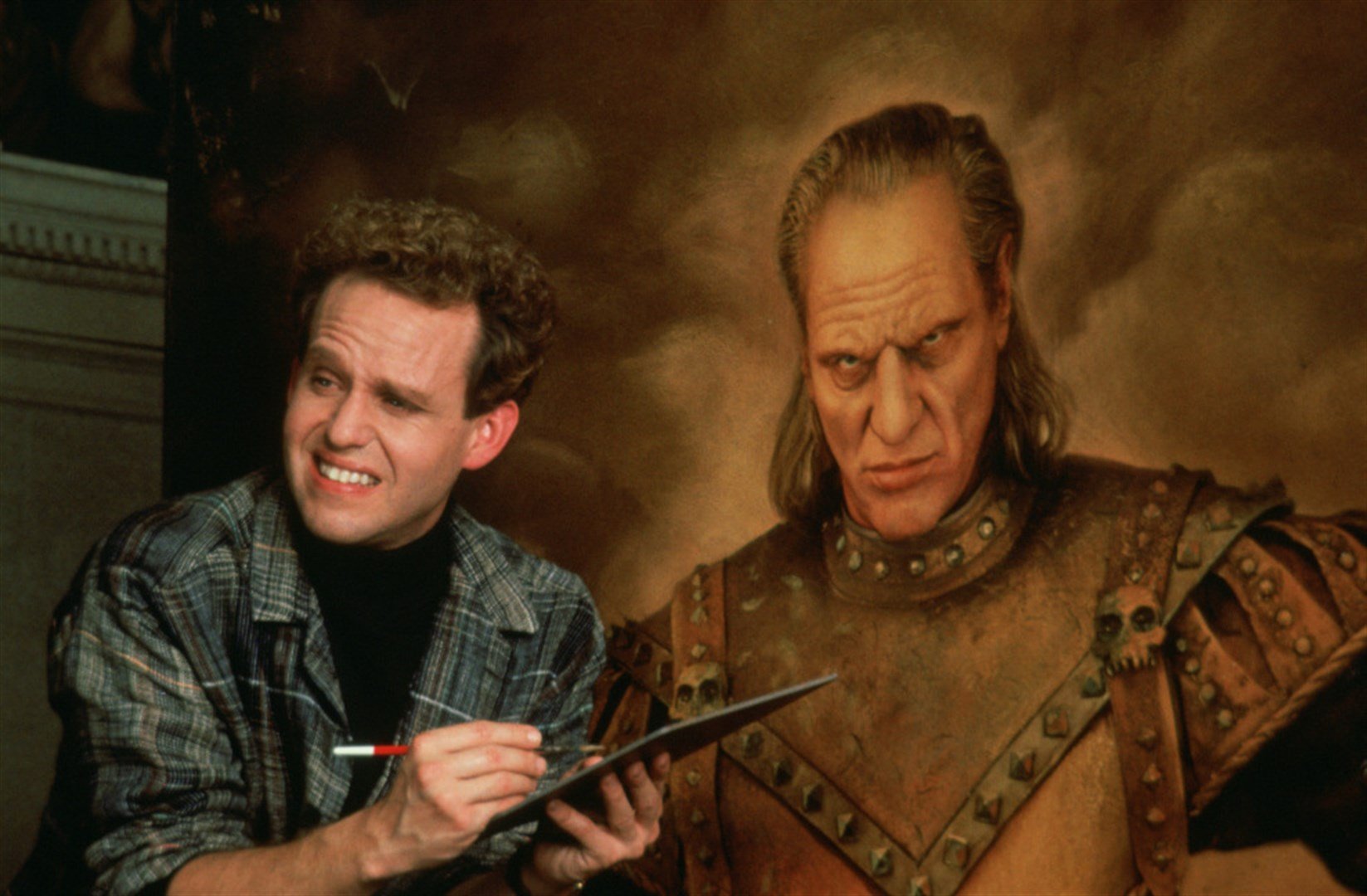 Actor Peter MacNicol has a scene-stealing supporting role in Ghostbusters II as Janosz, the flamboyant curator at the art museum where Dana works. In the script, this character was named Jason and was more of a straight man antagonist along the lines of William Atherton’s Peck in the original Ghostbusters.

However, MacNicol pitched a more comedic take on the character (including making him Carpathian, and thus more closely associated with Vigo). Ivan Reitman loved this, and allowed MacNicol to make the part his own.

4. Eugene Levy shot a role that was cut completely from the final film 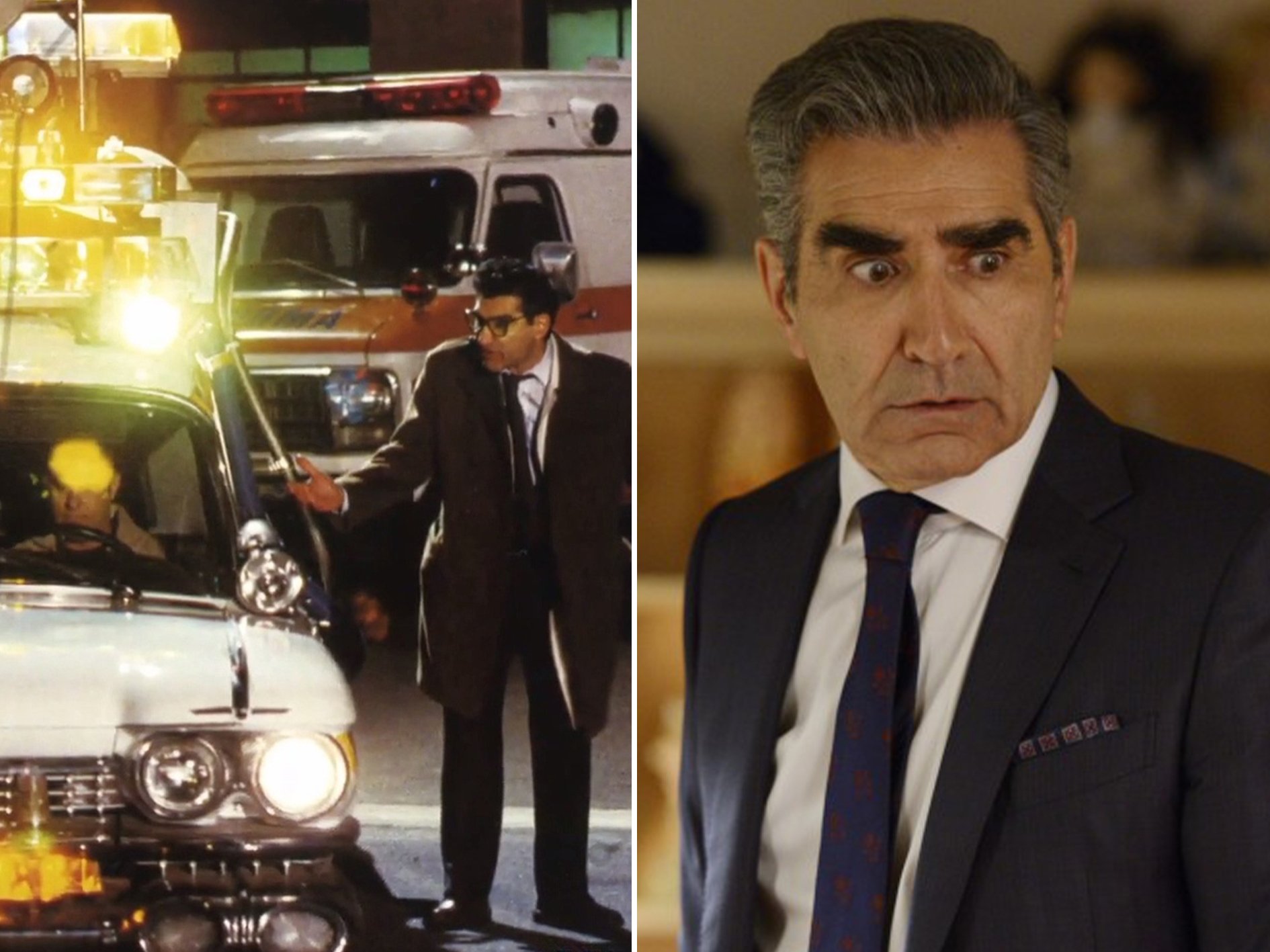 Initially, Ghostbusters II was going to feature a supporting turn from Eugene Levy as Sherman, the cousin of Rick Moranis‘ Louis. Sherman worked at the mental institute where the Ghostbusters are committed midway through the film, and the character had a key role to play in getting them released.

Unfortunately for Levy (a recent Emmy winner for TV’s Schitt’s Creek), all his scenes wound up being left on the cutting room floor.

3. The last 25 minutes of the film was reshot in four days after poor test screenings 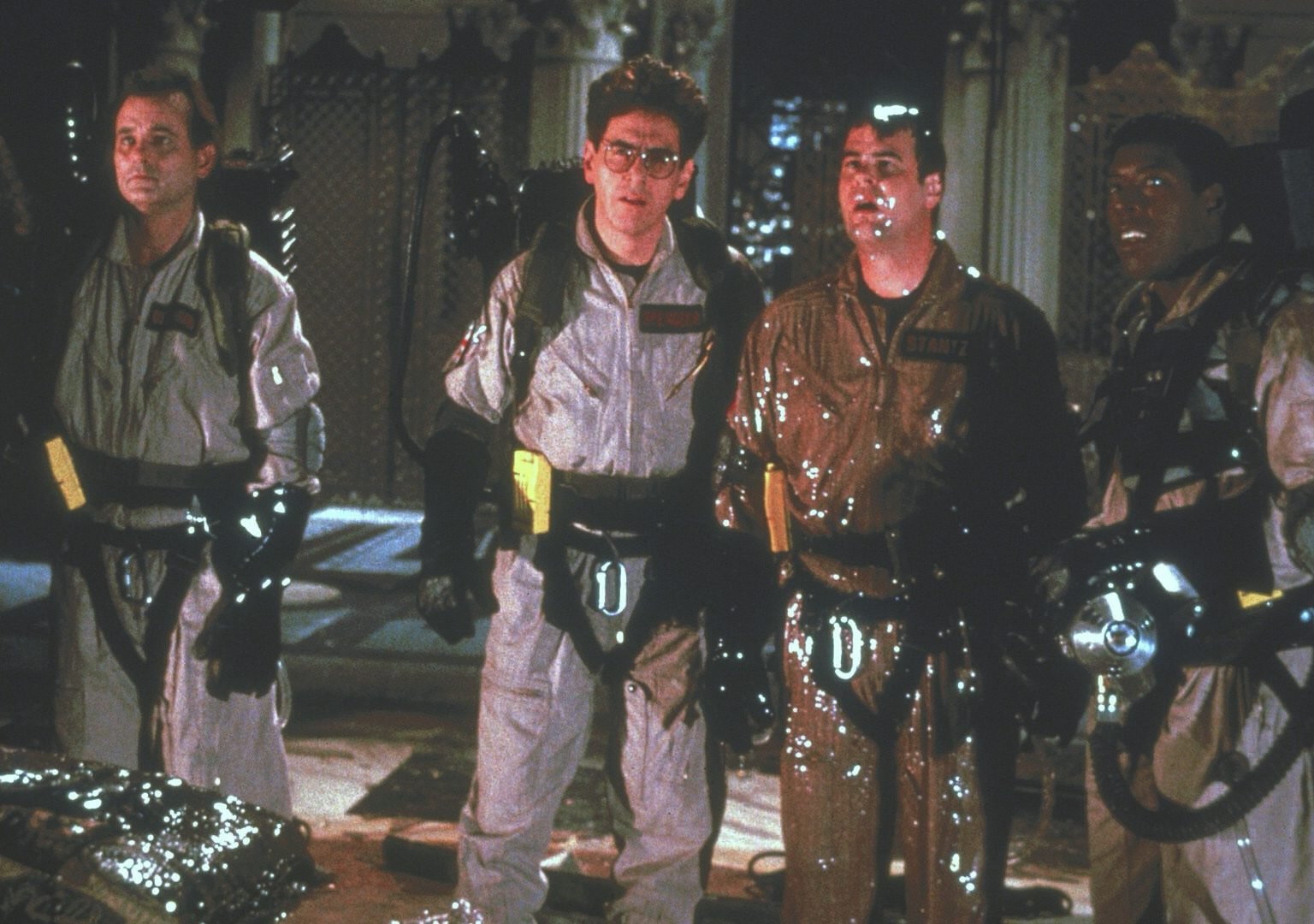 Eugene Levy’s role wasn’t the only thing shot for Ghostbusters II which wound up being cut. After some disastrous test screenings, the Ghostbusters II cast and crew realised that the final act they’d shot didn’t work.

As a result of this, Ivan Reitman rapidly called the shots on four days of reshoots, in which they completely reshot the last 25 minutes and added some new scenes.

2. It underperformed at the box office after opening back-to-back with Batman 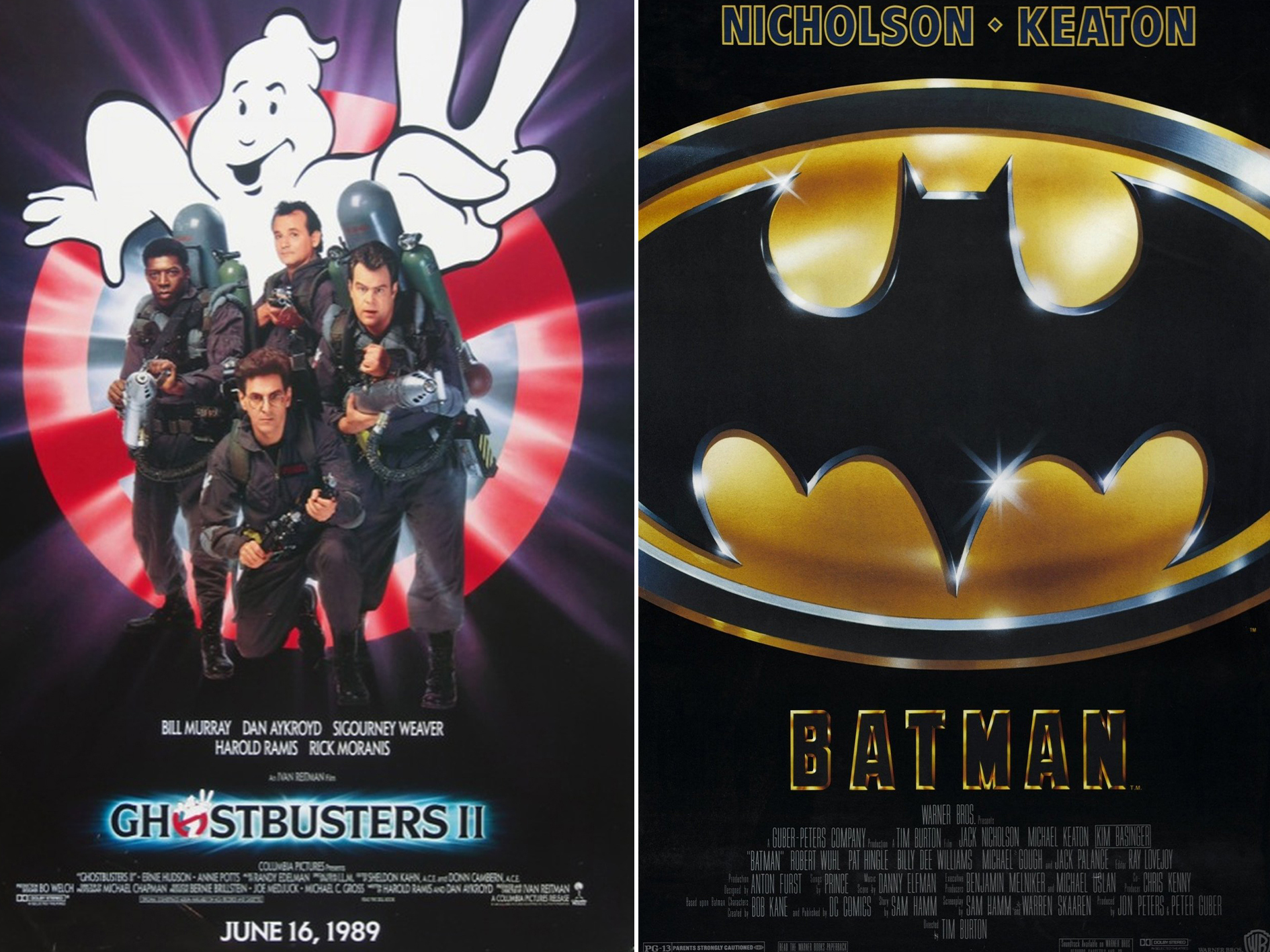 In the end, the stress of making Ghostbusters II didn’t totally pay off. The film opened just a few days before the biggest blockbuster of the year, Batman, and as a result its box office performance was far lower than expected at $215.4 million worldwide. On top of which, the reviews were largely unkind, with most critics blasting the film as a carbon copy of the original.

The experience caused divides in the Ghostbusters camp, in particular Bill Murray, whose refusal to play Peter Venkman again was one of the main reasons the long-planned Ghostbusters III never happened.

1. Oscar actor Hank Deutschendorf took his own life in 2017 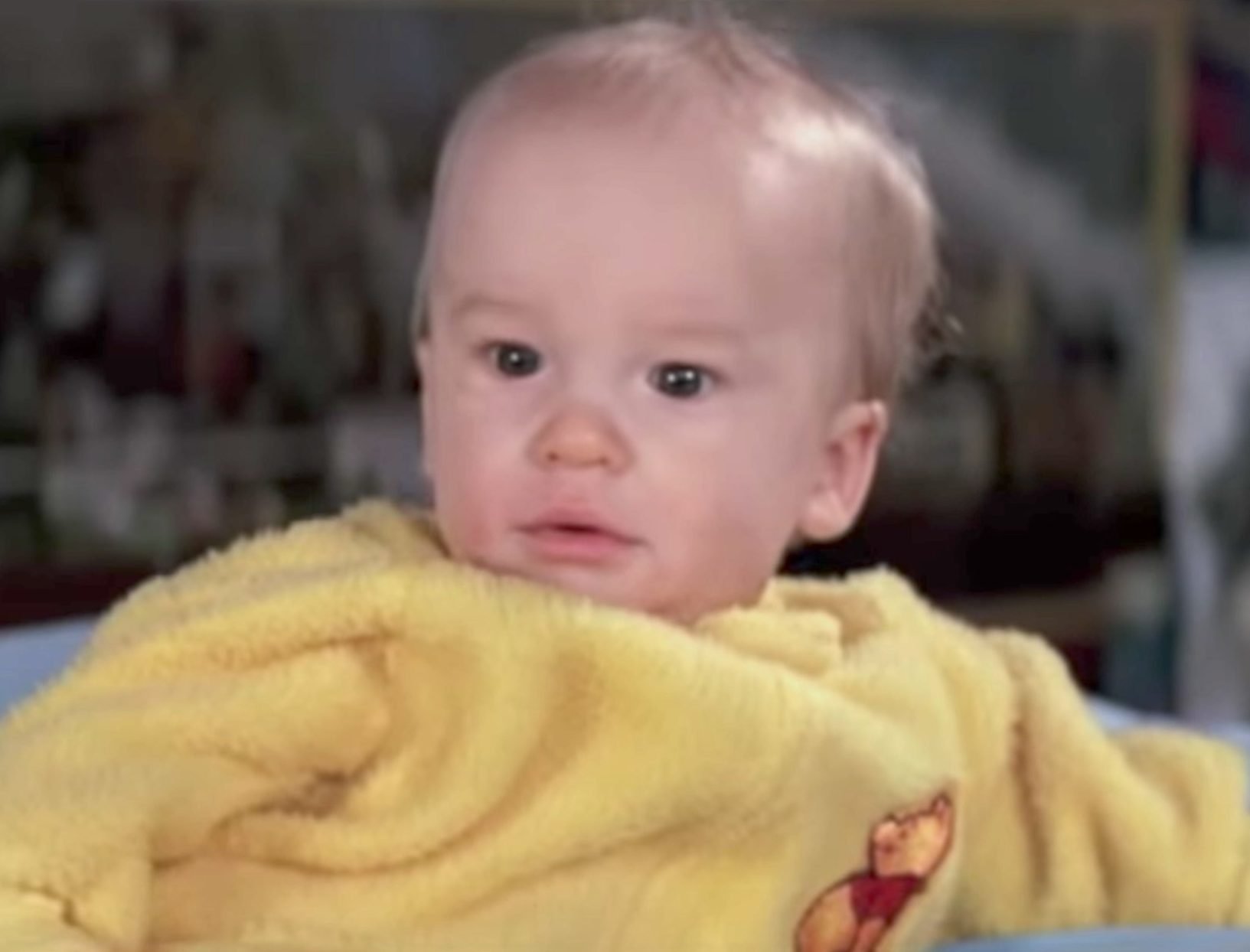 The role of Dana’s son Oscar was taken by newborn twins Hank and William Deutschendorf, the nephews of folk singer John Denver. Tragically, Hank struggled with severe mental illness, and he took his own life in 2017 aged 29.

Since his twin brother’s death, William Deutschendorf has worked extensively to promote awareness of mental health issues and suicide prevention.