12 Classic Songs We Used To Sing In Assembly

Who can remember sitting on a cold, hard floor every Monday morning and singing school assembly songs? That’s right – the start of the week meant the start of assembly time. Some of us loved it and some of us hated it.

One thing we did all have in common is the classic assembly songs we used to sing! We’ve brought you a list of the most popular primary school hymns and songs from the 1980s that every kid used to have to sing. These may have varied slightly from school to school and region to region, so let us know if any of these resonate with you. Enjoy!

1. All Things Bright And Beautiful 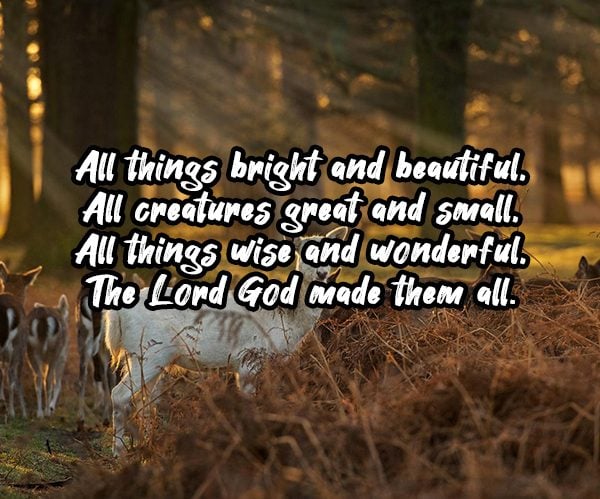 This one’s an old school classic, and something that children are still singing in schools to this day. In fact, the hymn was written entirely for this purpose and has some interesting literary origins.

Written in 1848 by Cecil Frances Alexander (who also wrote the Christmas banger Once in Royal David’s City), the lyrics are inspired by the Psalms as well as Samuel Taylor Coleridge’s The Rime of the Ancient Mariner: “He prayeth best, who loveth best; All things great and small; For the dear God who loveth us; He made and loveth all.”

2. When A Knight Won His Spurs 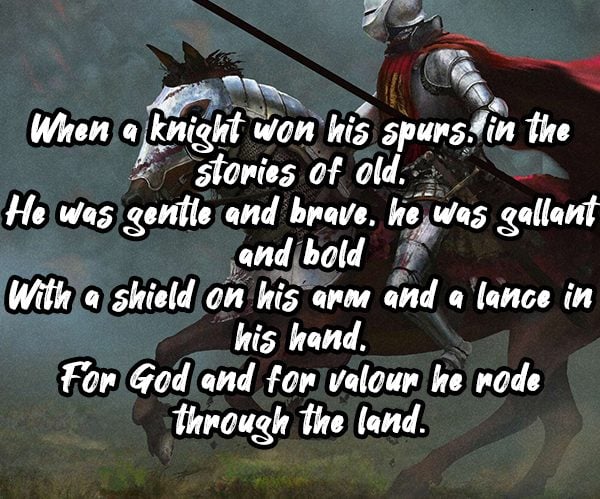 The songs we sang in assembly were mostly religious – given the long history intertwining music and religion, that’s no surprise – so it was refreshing to sing a song about ogres and dragons and a gallant knight.

Make no mistake, this is still an inspirational hymn about faith (“For God and for valour … let faith be my shield,” and so on), but the lilting folk melody and literal mention of killing dragons made this song more exciting than most.

3. Lord Of The Dance 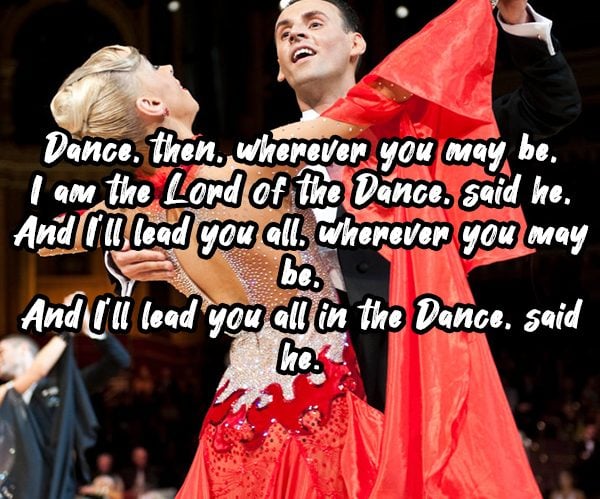 Another classic tune that eighties kids will recognise, Lord of the Dance is actually far more recent than you might think. It was written in 1963 by folk musician Sydney Carter and set to the tune of the American Shaker hymn Simple Gifts.

In writing the new lyrics, however, Carter didn’t just take his inspiration from Christianity; he was even influenced by Hinduism. “I see Christ as the incarnation of the piper who is calling us,” Carter writes. “By Christ I mean not only Jesus; in other times and places, other planets, there may be other Lords of the Dance.”

4. Go Tell It On The Mountain 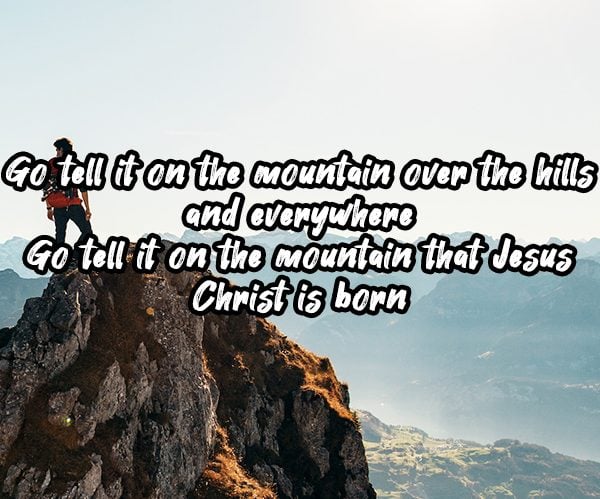 You might not even have realised it as a child, but Go Tell It on the Mountain has some history that might surprise you. It was composed by John Wesley Work Jr circa 1865, Work being the first recorded African American collector of folk songs and spirituals.

In 1963, the folk team of Peter, Paul and Mary adapted the song to feature Moses’ exhortation of “Let my people go!” from Exodus and released it as a single. It was a moderate success, arriving as it did during the Civil Rights struggle, and peaked at number 33 in the US. 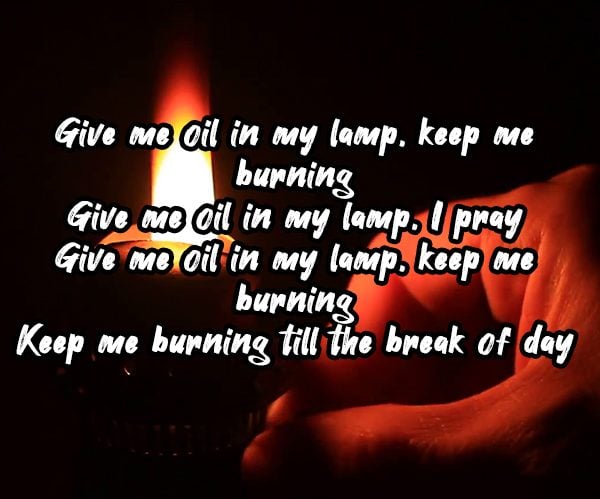 This is a song that has been a hit for Jamaican ska singer Eric Morris and the LA rock band The Byrds, but one that also has a political history deeper than any child could know.

It’s frequently been used as a football chant – with different lyrics, of course – under the name ‘No Surrender’. “With St George in my heart keep me English … no surrender to the IRA,” read the adapted lyrics. Since it’s been chanted in the face of Ireland’s national team during and after the Troubles, the lyrics understandably cause tension. 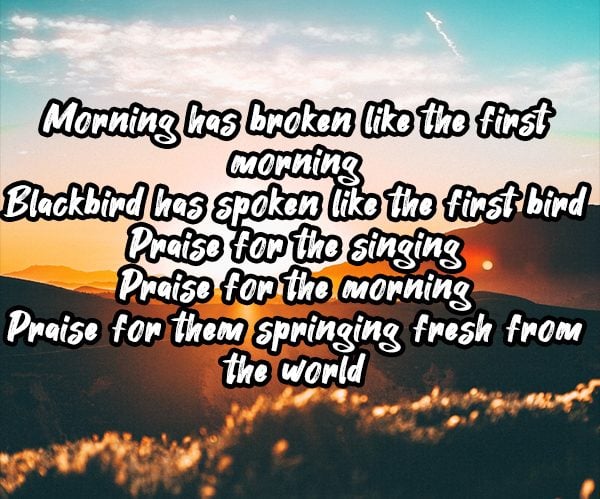 Not every hymn is a complete and utter bop, and Morning Has Broken is definitely one of the more demure songs we used to sing. At the same time, it’s hard to argue with a song that’s been so successful in both school halls and the charts.

Morning Is Broken was written in 1931 and set to a Scottish Gaelic melody, Bunessan, but didn’t achieve popular recognition until Cat Stevens released it as a single in 1971. It peaked in the top 10 across the globe; Stevens would convert to Islam six years later, which your Anglican teachers might not have told you! 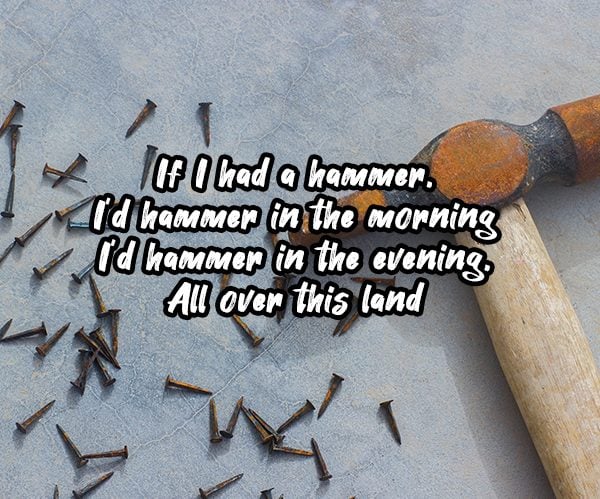 Just because our hymns were mostly Christian doesn’t mean they weren’t progressive, and If I Had a Hammer is probably the best example.

Written by Pete Seeger and Lee Hays, the song was composed in 1949 in support of workers; it became a top ten hit for Peter, Paul and Mary, whom we’ve mentioned once before! Apparently they never had any original ideas. 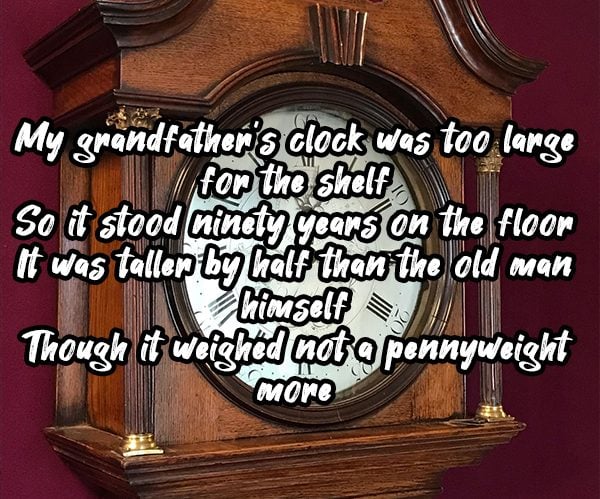 Do children even really know what they’re singing? This was one of the darkest hymns we ever sang in assembly, and it’s a wonder that it ever made it into schools in the first place.

A little factoid, though: My Grandfather’s Clock, written in 1876 by Henry Clay Work, is thought to have originated the phrase ‘grandfather clock’. You know, because the grandad dies. 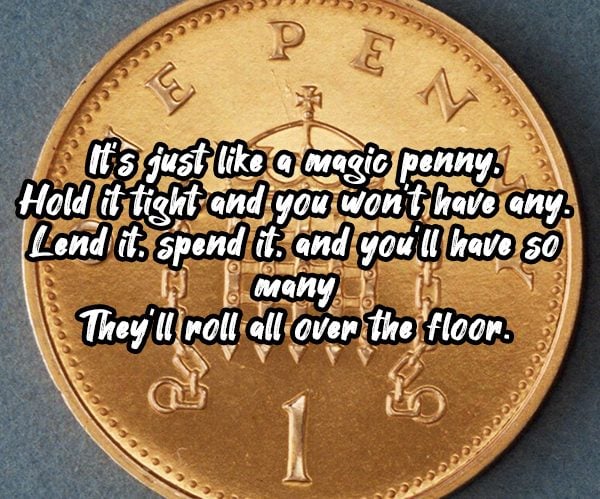 Magic Penny is a song by Folk/Blues musician Malvina Reynolds that released in 1957. Reynolds was a famed musician in her own right, particularly for Little Boxes, but she was also a notable writer of children’s songs.

Depending on your view of the world, you might argue that Magic Penny is a song about sharing your wealth and talents with others, because they’ll eventually be repaid many times over. You could also argue it’s indoctrinating children to become venture capitalists.

10. He’s Got The Whole World In His Hands 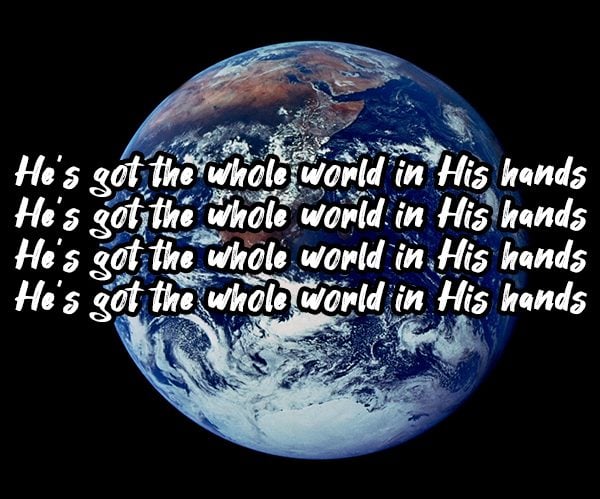 Ask any eighties kid what their favourite hymn was at school, and we’ll wager that they put this one in their top three. For many, it’d be their favourite of all, since this is a song that not only came with a catchy tune but also: hand movements!

Written in 1927, this hymn became a worldwide sensation after child singer Laurie London hit number 1 with it in the US. It remains the only gospel song to achieve this feat.

11. When I Needed A Neighbour 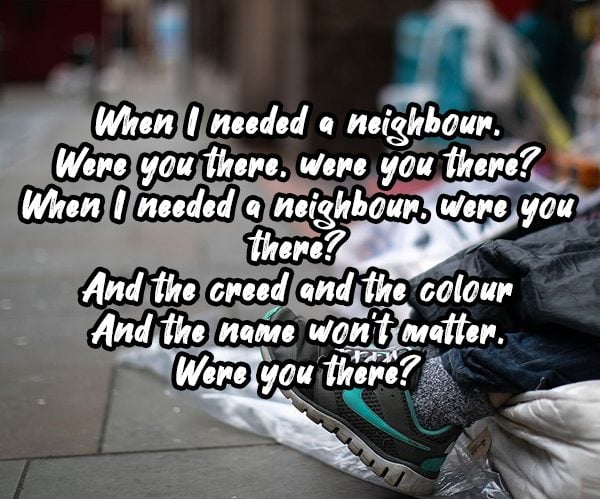 Another hymn by Sydney Carter – which you might have recognised due to its echoing melody – the origins of this song are far less clear. But what we do know is that it cuts to the heart of Christian teaching, that no one should be left behind in their moment of need. 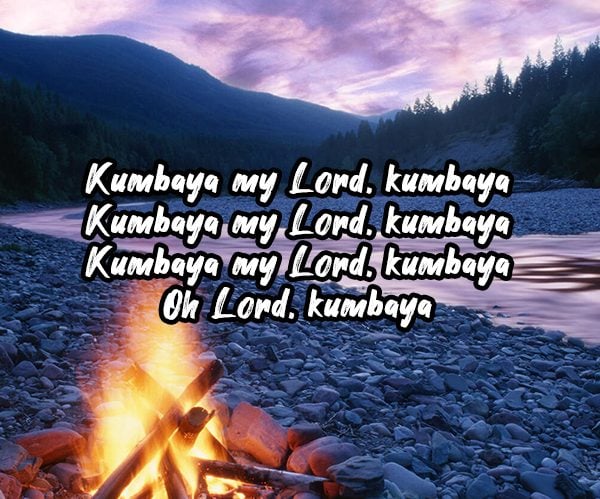 What does Kumbaya even mean? If you grew up in an isolated town or village in the 80s, you might even have known what were you singing. Kumbaya in fact means ‘Come by here,’ the song being an appeal to God to come and save those singing from their troubles.

This becomes especially poignant when you learn that Kumbaya, while its origin is disputed, was likely composed by slaves in South Carolina and Georgia, sung in the Gullah dialect. It’s since become a standard campfire song, but it’s worth remembering that songs with such power often come from those who have none.