12 Playground Games We All Used To Play In The 80s

Ask your friends what they used to play back in the 80s and their faces are sure to light up. Back in those days when kids’ TV was just a couple of hours every afternoon and not many of us had computers of games consoles, the order of the day was playing outside and having fun with friends. Here are just some of the games we used to play. 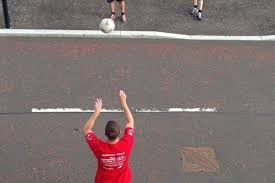 No electronics were required for this simple street game. All you needed was a ball and a friend. Players had to stand on opposite sides of the road (keeping an eye out for passing cars), then aimed the ball at the opponent’s kerb with the hope of it hitting the kerb, bouncing back and catching it.

If the player missed the kerb they received no points for their turn. Children would play this for hours, making up their own point scoring system as they went along. 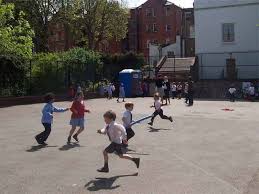 Whether you call it tig, tigs or tag, this classic playground game has become controversial in recent years as some schools have banned it for being too dangerous! Well, the children of the 80s managed to play it regularly and survive to tell the story.

A simple game of chasing your friends, tagging them with a touch of the hand and shouting, “Tig! You’re it.” The player who was ‘tigged’ then had to take their turn catching the other players, and so on until the bell rang or no one could be bothered to continue. 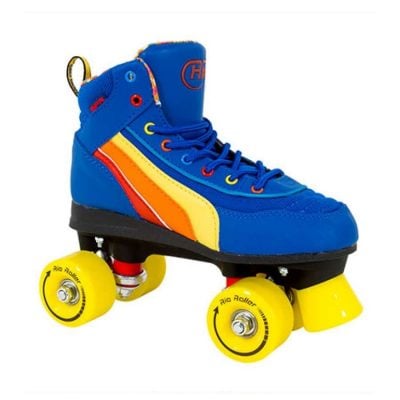 Who doesn’t love a pair of roller skates? Few things make you feel more child-like and free than squeezing a pair of wheeled sneakers onto your feet and zooming around at great speeds (usually without a helmet or pads back in the old days).

Roller skating isn’t a pursuit limited to the very young; it’s seen a huge resurgence of interest from adults who’ve taken it up to alleviate the boredom of the Covid-19 lockdown. 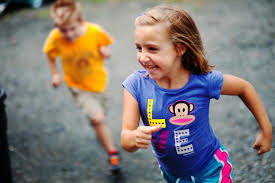 Definitely a product of a more innocent era, catchy kiss (otherwise known as kiss-catch or kiss-chase) is pretty self-explanatory: a boy chases a girl, or vice versa (but very rarely two players of the same gender in those less enlightened times), and gives them a kiss when they catch them.

Now that youngsters are being educated about consent and respecting personal boundaries from an early age, this game has fallen out of favour somewhat. 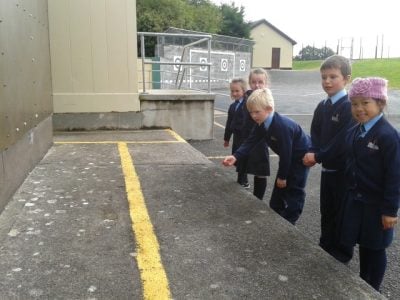 There is a bit of debate about whether Pitch and Toss is the correct name for this game; others referred to it as Pigeon Toss, Pitching Pennies or Jingles.

Players choose a place to aim, normally a wall, and whoever throws their coin the closest to the mark wins that round. 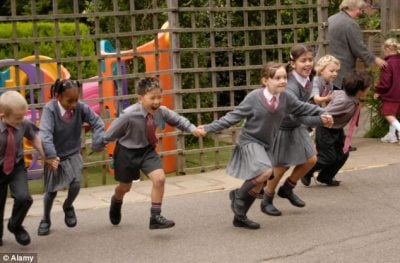 This was a firm favourite at primary school. The Bulldogs stood in the middle of the field and the other players stood on ‘home.’ The players had to run from one side of the field or playground to the other without being caught; If they were, they became bulldogs too.

As with tigs, the physical nature of this game meant that kids sometimes got too rough, and because of this some schools have now banned it.

Stuck in the Mud 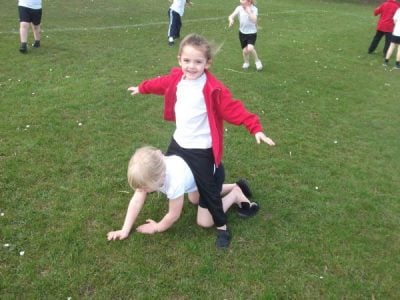 Most children have played this at one time or another. Simialr to tig, one player is ‘it’ and has to touch other players who are then ‘stuck in the mud.’ That player has to stand still until another player frees them by crawling through their legs.

However, if you touch their legs while crawling through, you too become stuck in the mud! Often PE teachers would resort to this game when they hadn’t planned ahead for their lessons. 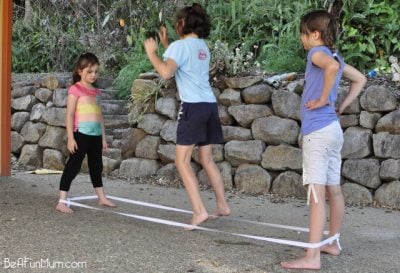 If you’ve never heard of elastics, it’s similar in spirit to old-fashioned skipping – only way more 80s, because it uses nice, modern, synthetic elastic instead of boring old rope.

Two people stand in the elastic band, stretching it out so other players can jump over it. Much like skipping, players would often sing little rhymes while jumping. 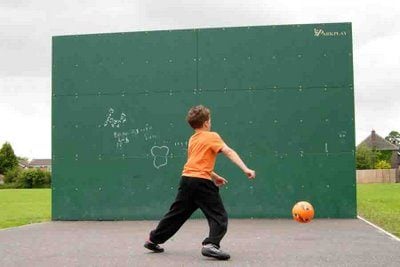 Today, the name ‘wall-y’ might bring to mind the little robot from the Pixar movie, but this was something much more straightforward. All you did was find a wall, get a ball and take turns kicking the ball off the wall. Whoever misses the wall, loses.

It’s a simple game with simple requirements: all you need is a reasonably sturdy ball, and a large open wall that no one will mind you smacking that ball against. 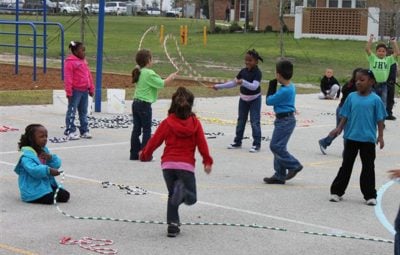 This was a regular component of playground games back in the day. Some of us preferred a single skip to merrily jump around with; others preferred a long piece of rope that could be held by two people while friends took turns jumping over the rope and chanting rhymes.

It could be very tricky trying to jump in at just the right moment but so satisfying when you mastered it! 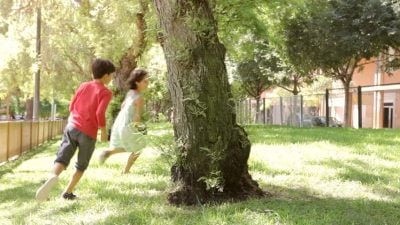 One person had to stand at a tree, lamppost or alternative ‘block’ while the others ran to hide. The challenge was then to get back to the tree or base before the person who was on could catch you and then shouting, “Block, 123!”

All in all it was a great way to burn off energy on the playground or after school, although it definitely resulted in some temper tantrums. 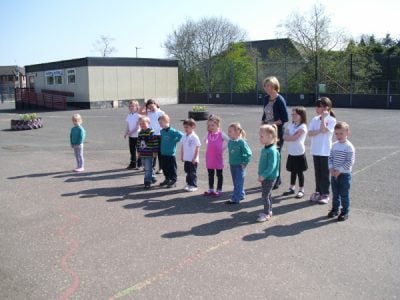 In this fun game, one player is the crocodile and everybody else stands at the opposite side of the yard or room. They then chant, “Please, Mr Crocodile, may we cross your river? If not, why not? What’s your favourite colour?” The crocodile then chooses a colour and anybody wearing that colour in any form has to try and pass the crocodile to the other side without being caught.

Different people may have played different variations on this game. Some may remember the similar ‘What time is it, Mr Wolf?’ in which one kid was the wolf, and the other kids had to walk the number of steps forward according to the time given – but when the wolf declared it was ‘dinner time!’ they’d run to catch as many others as they could.