12 More Classic Board Games From When You Were Growing Up

We had a look back at some classic board games recently including Monopoly and the true gem of the 80s, The Neighbours Board Game! It’s quite amazing just how many memories board games can bring up for people, maybe it’s because it reminds us of our summer holidays, time with family when we were off, weekends away at our Nana and Grandad’s house playing their favourite games with them and learning the importance of being a good loser, and more importantly a good winner!

Many of you had really fond memories of the games that we looked at previously, so without further ado, here are 12 more to take you straight back to the good old times of the summer holidays in the 80s!

I can’t even start to tell you how many hours my sister and I spent playing this game. The game of strategy and skill to get your counters down to the bottom of the board before your opponent, and the feeling of elation and relief when they had to turn the dial that had 3 of your counters in and they’d plop out to victory! And who else had that urge to cheat when you started to turn the dial and you could feel the resistance of your opponent’s counter in the wheel, but the rules dictate you can’t start turning it back the other way instead – damn those rules! 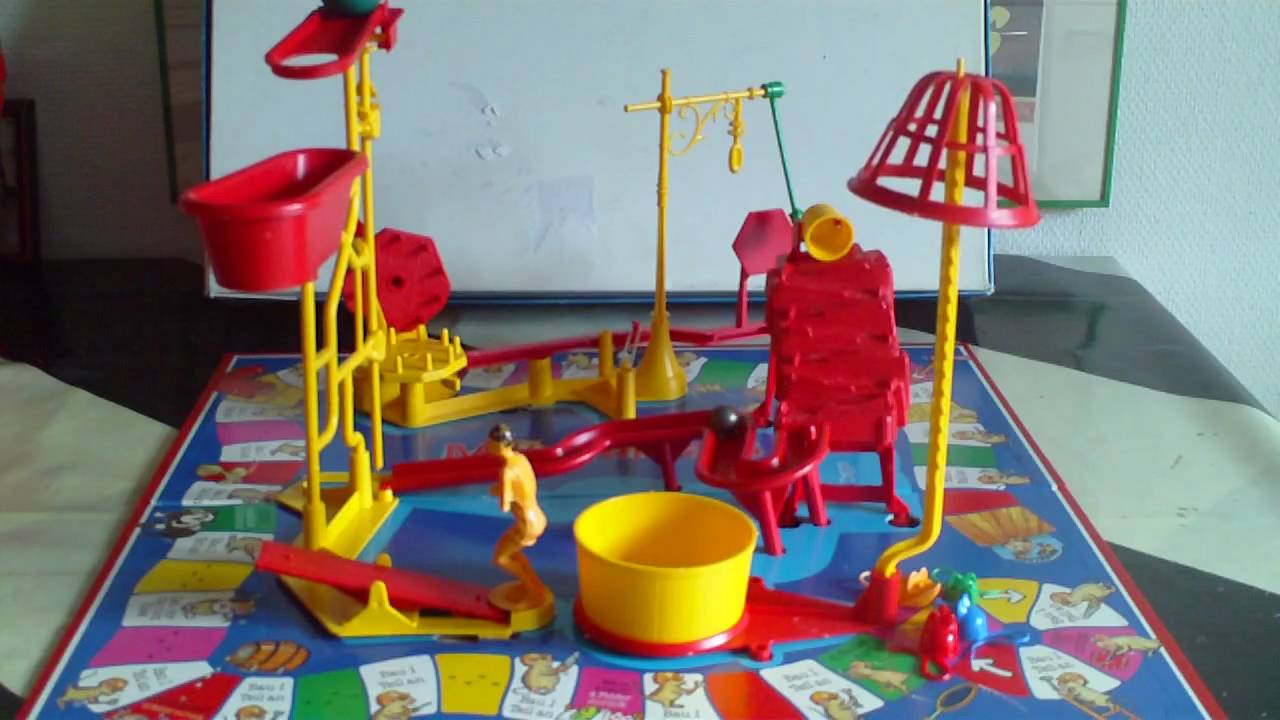 The game where you have to build up the trap ready to catch that pesky mouse. The game itself wasn’t always that interesting but this one was all about the end game and being the on to set off the completed trap! Anyone else forego the main game completely and actually just set this up on a quiet rainy day at home so you could just set off the trap repeatedly? This was one of those moments that never got boring!

This one could get a bit frenetic as everyone just smashed away at their hippo’s “tails” as fast as they could to get them eating the marbles. Time it right (or wrong) and a marble would get caught under the hippo’s mouth and ping across the table in to your opponent’s face – win by any means that’s what I say! Altogether, now, “Hungry, hungry hippos…” 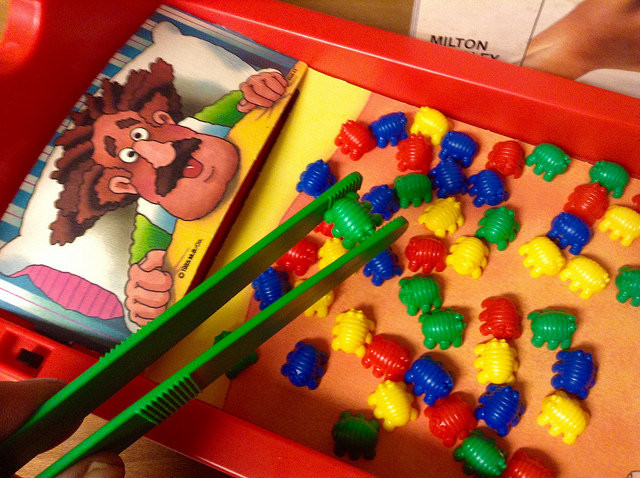 Not sure how a game about a vibrating bed was really suitable for kids, but we’ll forego that for now. This one was great fun with the bugs jumping about and you having to try and pick them up with tweezers and get as many as possible! This was a genuinely tricky game and one that actually became easier when the batteries started to run down – to replace them, or not? That is the question! 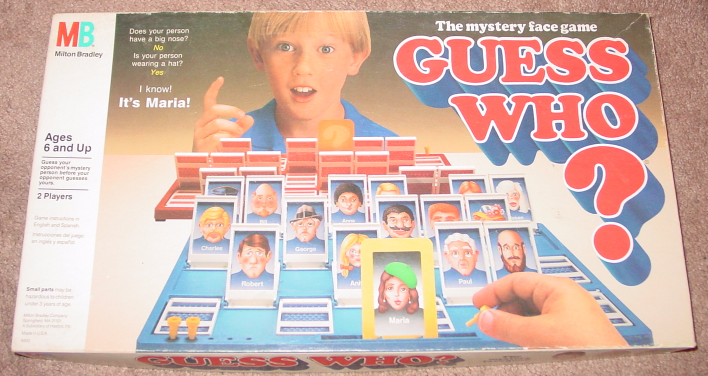 A classic game that is still popular today – though today’s characters look quite different and don’t have the same appeal. The game of guessing the person by narrowing it down one feature at a time – glasses, hair colour, facial hair, etc. We always played you weren’t allowed to ask if they were male or female until the third turn, did anyone else? Did you have any other things you weren’t allowed to ask too soon so that it was made a bit harder? And did you put the characters back in the pack after each turn? Those with a keen eye could count the cards and know who was left to pick from by the end – don’t play this game with Rainman!

Trying to pull out those sticks without the marbles falling was torture, especially towards the end of the game when it didn’t matter which you took those last marbles would fall and you simply didn’t want to take your turn and lose! The noise of the marbles crashing down was incredibly satisfying though, especially when it was on your opponent’s turn! 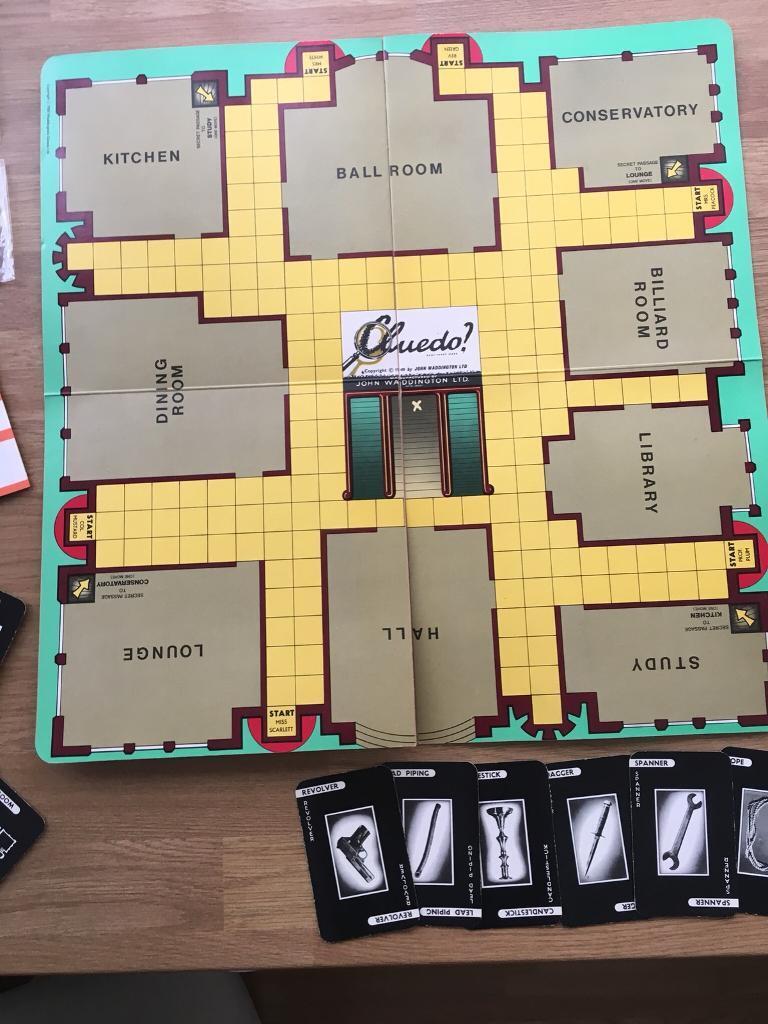 A true classic. We spent so many hours playing this game, and it never got boring. Was it Colonel Mustard or Miss Scarlet? The Library or the Conservatory? The candlestick or the revolver? That’s what you had to work out! Were you one of the crafty ones who would select someone or a weapon that you had in your own hand, increasing the chances of seeing cards you hadn’t seen before in your opponent’s hand? 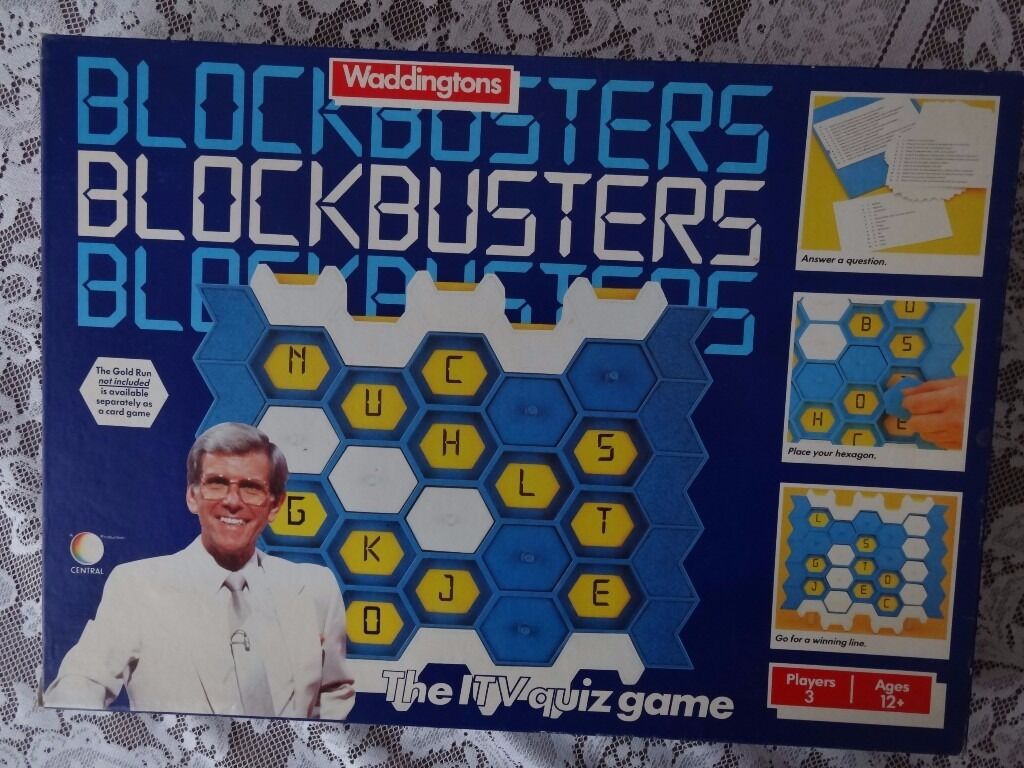 Based on the classic TV series, Blockbusters saw you always saying “Can I have a P please Bob” and sniggering with each other! The general knowledge quiz that really made you feel like a brainiac when you won! This was one of those classic TV shows where the board game was OK, but not a patch on the original as it didn’t have the same charisma without the host. The board game version of the video game was really inventive as you took Pac-Man round the board, he had a hole in the bottom that allowed him to “eat” the dots as you went round avoiding the ghosts – great fun, and the feeling of accomplishment when you had eaten so many dots you had ti empty Pac-Man mid-turn was difficult to find anywhere else! 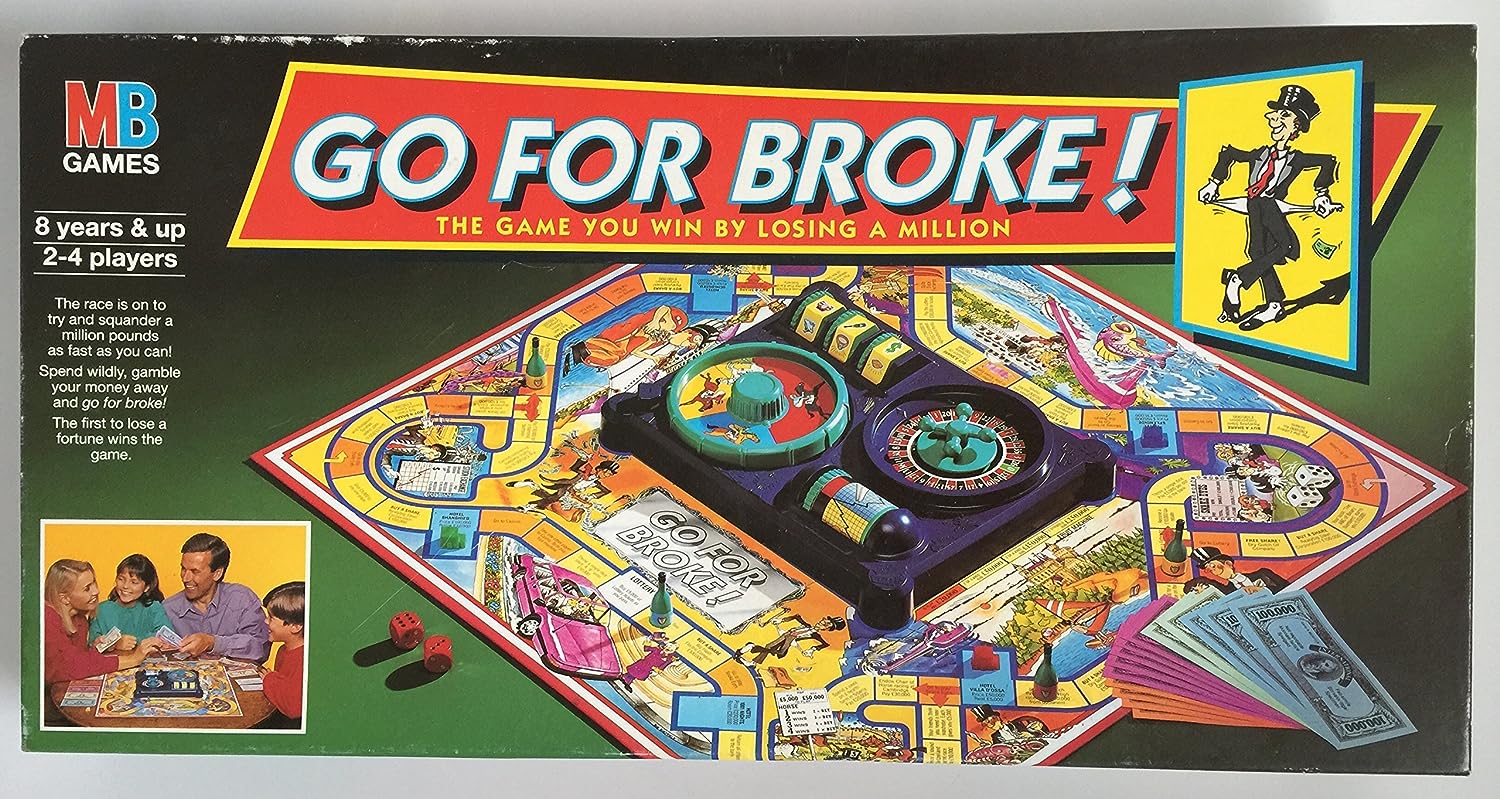 The game where you start with a Million Pounds and have to try and lose as much of it as possible before the rest of your opponents, kind of like a reverse edition of Game of Life! Why is it that this is also one of the easiest games to play when you aren’t actually playing it? I’m just too good at getting rid of my money! 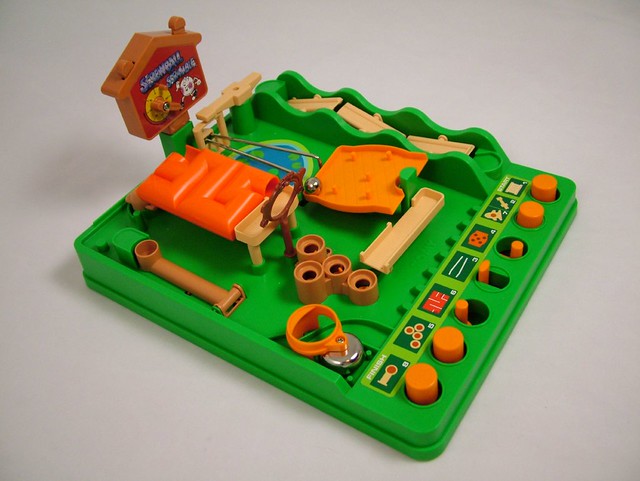 This was so tricky and yet so much fun no matter how many times you completed it. Get the marble to the end of the assault course, but that blind maze, and those bloody tilting ramp bridges used to have me waking up at night sweating! I need to try and dig this one out as I have a need to complete it one last time…. Or maybe I’d better re-buy it as mine appears to have lost several pieces in a mid-air hard-wall collision that was a genuine “accident”! 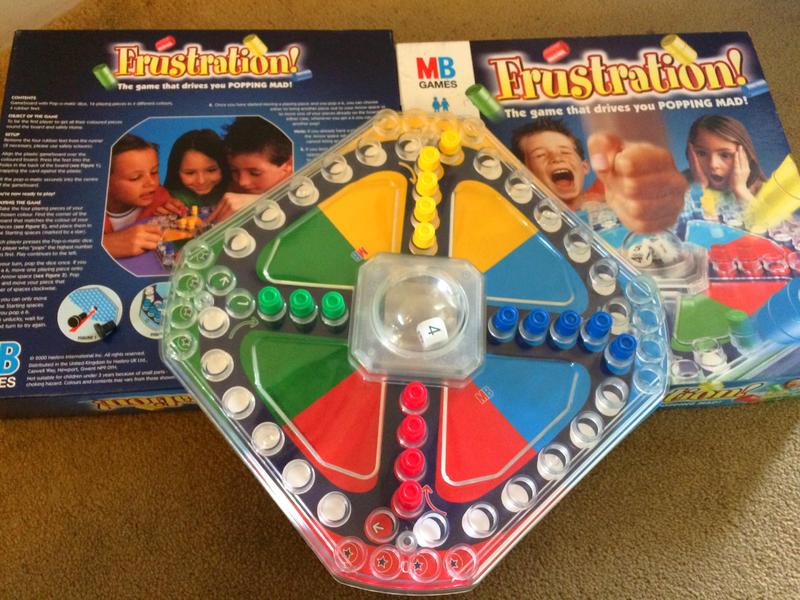 The gimmick with this one was the die inside the plastic dome, you pushed it down to pop the die up rather than rolling it, and then moved your pieces round the board in a bid to get them all to the centre first – simple but effective fun!

Which of these gave you endless hours of fun? Which do you still play today? What have we missed out, and need to look back on? Let us know in the comments as always!