10 Amazing Facts You Never Knew About Star Trek II: The Wrath of Khan

Whenever we talk about sequels that were better than what went before, one film that always comes up is Star Trek II: The Wrath of Khan. After the first movie based on the 60s TV classic proved underwhelming, this 1982 follow-up went all-out with action, thrills and high stakes for the characters. Thanks to the similar success of Star Trek IV: The Voyage Home and Star Trek VI: The Undiscovered Country, The Wrath of Khan established the idea that the even-numbered Star Trek movies are always the best ones. But did you know the following facts about the film?

It was a sequel to a Star Trek TV episode

As well as following on from 1979’s Star Trek: The Motion Picture, Star Trek II: The Wrath of Khan also serves as a direct sequel to an early episode of Star Trek, Space Seed. This 1967 episode from the show’s first season introduced Ricardo Montalban as the genetically enhanced warrior Khan Noonien Singh.

Producer Harve Bennett selected this episode as the sequel’s focus because he thought Khan was an ideal big-screen villain. The filmmakers were keen to make the second Star Trek movie more exciting, after complaints that the 1979 film had been slow and dull.

Ricardo Montalban struggled to get back into character 15 years later

At first, actor Ricardo Montalban found it difficult to get back in to character as Khan, as it had been a full 15 years since he had first played the character in the original Star Trek TV series. In the years since, Montalban had achieved greater fame as Mr. Roarke on TV’s Fantasy Island, and the actor felt “stuck” in that character.

In an effort to re-acquaint himself with the character of Khan, Montalban watched Space Seed repeatedly, and after a few times he felt he had rediscovered the character of Khan in himself. It clearly worked, as Montalban’s performance in 1982’s The Wrath of Khan made him one of the most celebrated movie villains of all time. 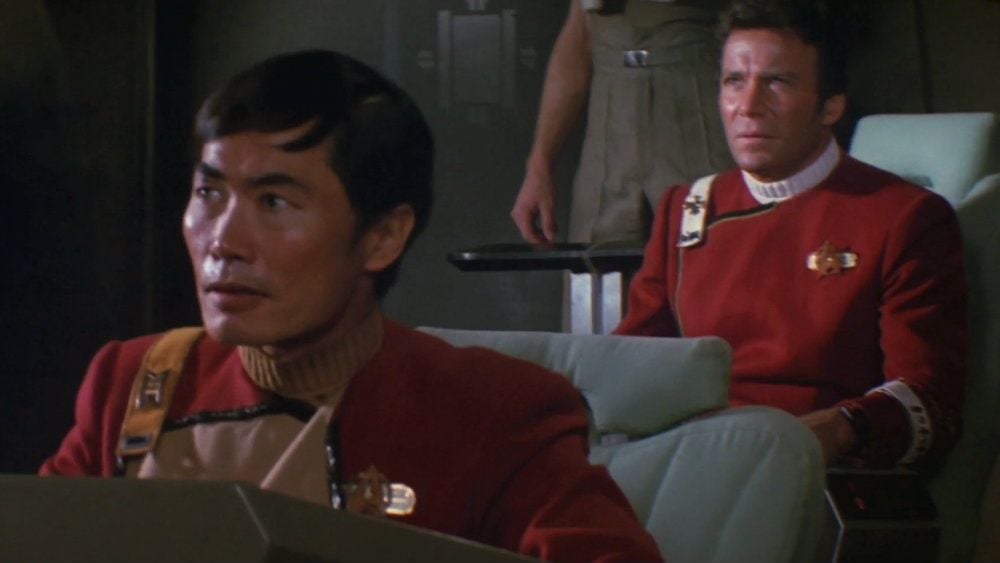 Although George Takei is best known for his role as Mr Sulu in the Star Trek series, the actor has at times had a love-hate relationship with the role. When Star Trek II was first pitched, Takei decided that he no longer wanted to play the part of Sulu and declined the opportunity to reappear.

In response to this, Captain Kirk actor William Shatner (with whom Takei also has a notorious love-hate relationship) personally called his co-star and convinced him to play Sulu again. This must have done the trick, as Takei went on to play Sulu in four more Star Trek films, as well as reprising the role in an episode of Star Trek: Voyager and the unofficial fan-produced series Star Trek: New Voyages.

Saavik had a more complicated backstory in the script 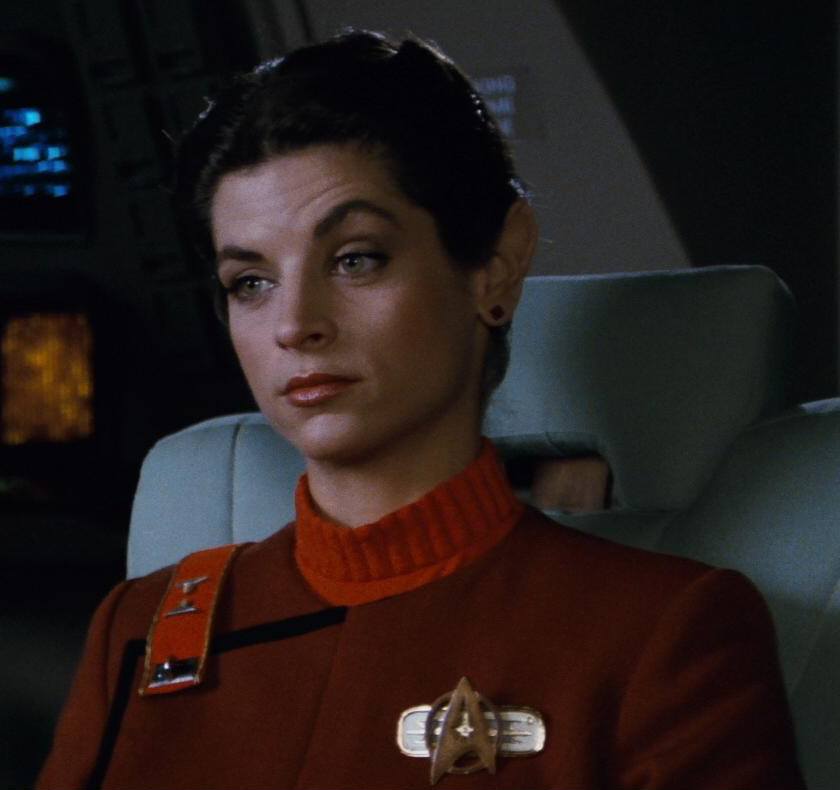 Kirstie Alley was a big fan of Star Trek from a young age. She was very keen to appear in Wrath of Khan and even imagined when she was younger playing Spock’s daughter in the show. Her Star Trek II character Saavik was supposed to have had a back story revealing that she was actually half-Vulcan and half-Romulan (hence we see her showing emotion, which is uncharacteristic of Vulcans).

Unfortunately for Alley, these details about Saavik were deemed extraneous and wound up being cut from the final film. The character of Saavik would return in Star Trek III: The Search for Spock, but Alley did not reprise the role (accounts vary as to why, scheduling and/or personality clashes said to be a factor). Instead, Robin Curtis played Saavik in the follow-up.

In an early scene when the old Enterprise crew re-assembles, James Doohan’s Scotty remarks to Kirk that he had recently had “a wee bout” of ill health, but that Dr McCoy (DeForest Kelley) had pulled him through. This was in reference to the fact that James Doohan had recently suffered a heart attack not long before filming began on Wrath of Khan.

Despite this comparatively early health scare, James Doohan lived another 23 years after the production of Star Trek II, and reprised Scotty in five more films plus an episode of Star Trek: The Next Generation. The actor passed away in July 2005; he was cremated, and later a portion of his ashes was taken into outer space.

Star Trek II shocked fans by killing off the beloved Mr. Spock in the climax. This was a stipulation of actor Leonard Nimroy, who only signed on for the sequel when he was promised a spectacularly dramatic death scene. Nimoy was not aware, however, that the movie’s closing shot would show his coffin on the planet Genesis.

As the film’s plot explains that Genesis is an experiment in creating new life, the implication was clear that Spock could be reborn. This glimmer of hope took Nimroy by surprise at the movie’s premiere: “I’m going to be getting a call from Paramount!”, he thought to himself. Indeed, he was reborn in Star Trek III: The Search for Spock, which Nimoy also got to direct.

The Vulcan language was overdubbed ‘gibberish’

The Star Trek universe is famous for its attention to detail, with literal books written on the customs and history of its imagined alien cultures, and even specifically created languages for its extra-terrestrial races. However, fans may disappointed to learn that actual Vulcan was not spoken on set: this dialogue was originally recorded in English, as the language hadn’t been created yet.

They took the filmed footage to a linguist at UCLA and told him “to come over and look at the scene, look at their lips, write down what they’re saying, and basically come up with jibberish, with gobbledygook that sounded different but matched the lips.” The new ‘Vulcan’ dialogue was then dubbed in during post-production.

Romulan ale is a running gag in Star Trek

A long-time joke in the TV show is that Romulan ale, a highly alcoholic and bright blue beverage, is forever restricted by a Federation embargo. But this movie sees the characters enjoy this drink at long last, as Dr. McCoy claims it’s a ‘medicinal’ item. In reality, the Romulan ale seen onscreen is Glacier Freeze Gatorade blended with seltzer.

Today, drinks branded Romulan Ale are commercially available, marketed specifically to Star Trek fans, although these are actually vodka and rye whiskey that have been coloured blue for that authentically Romulan look. Other Star Trek beverages have been put on the market too, including Klingon Bloodwine.

Moby Dick played a major role in this tale

In Khan’s study, you can spy a copy of Moby Dick, the classic American novel about a man hell-bent on hunting down a whale. In fact, Khan quotes the novel with his dying breath: “To the last I grapple with thee; from Hell’s heart I stab at thee; for hate’s sake, I spit my last breath at thee.”

Among Kirk’s antiques is a classic 70s computer

Star Trek has always been close to the heart of computer enthusiasts, so it’s nice to see that Star Trek II includes a touching nod to that section of the fanbase with the appearance of a computer from the time.

In a scene which shows us Captain Kirk’s collection of antiques, we see that he has a 1977 computer named the Commodore PET 2001. This was a special nod to the audience, as William Shatner had also featured in a print advert for this same device.