When we are kids, there is a lot about the shows we watch that goes right over our head. And as the shows were all aimed at kids, our parents probably didn’t pay too much attention either. In the episode ‘The Beginning of Rainbow Land’, Rainbow Brite battles ‘The Evil One’, as well as finding herself in an environment that shows children being held hostage and babies being left to die in the middle of nowhere.

And here’s us thinking she was all about rainbows! Did you ever notice just how dark this was when you were growing up, or did the subject matter simply skim right over your head?

2. The ThunderCats Get Naked Until they were given ‘protective clothing’ by their mentor, the ThunderCats were completely nude, causing much childhood confusion alongside perhaps a tiny bit of excitement… It seems even stranger that Panthro and Cheetarah went to the trouble of wearing belts – what exactly were they trying to keep up? Or is that the exact question they wanted us to avoid asking? Was this really appropriate in any way, if they went on to need clothing? In The Episode ‘There’s No Place Like Springfield’ Shipwreck becomes trapped in a simulated version of the future in which everyone around him suddenly melts and his wife and kid try to murder him, forcing him to kill them while his home burns down. Sweet dreams! This was another show that was trying to push the boundaries and really show if could be darker than the norm and with this episode it really succeeded!

4. A Demon Tries To Drag Kidnapped Children Into Hell In The Smurfs

In ‘The Smurfs Christmas Special’, a mysterious character called ‘The Stranger’ summons a circle of fire with the purpose of dragging children and Smurfs into the darkest pits of hell.

What a lovely Christmas feel-good show to watch as a young child! This just goes to show that even the most seemingly harmless of shows could at times become very dark indeed! In the episode ‘Fisto’s Forest’, a large bearded man called Fisto who has an armoured hand harasses young Elf boys by shooting white, sticky webbing at them. Let’s just go through that again, slowly. A large bearded man hiding in the forest. Called Fisto(!!). He waits for young elf boys to come along. Then harasses them. by shooting his sticky white liquid at them…. How the hell did they get away with this, seriously?!

6. A Demon Ties Up The My Little Ponies In the episode ‘April Fool’, April dresses in casual attire, causing her to be lusted after by the naughty turtles. Yuck.

The looks on their faces isn’t the worst thing though, “I think we need to keep an eye on her”, “Better yet, two!”. And as for Splinter, the dirty old rat! “You make this ancient rodent feel young again”!!

8. Children Are Dragged Into A Portal Under Their Beds In Dungeons & Dragons The episode ‘City at the Edge of Midnight’ involved small children being dragged through a portal located under their beds by a sinister force and made to work in some kind of demonic factory. Peppa Pig this was not! Dungeons and Dragons was full of really dark and scary imagery throughout its run, I was terrified of the three headed dragon as a kid! But this is certainly one of the more disturbing scenes and episodes! In the episode ‘Starbright, Part One: Falling Star’, Jem sings explicit lyrics about her man Ken, wondering “Is it me, or is he making love to a fantasy?” Naughty. I wonder how many kids watched this without thinking much of it, and how many parents heard what was being sung and turned straight over? Singing about her fella fantastising about her isn’t appropriate for a kids show is it?

10. A Girl Sells Her Soul To A Demon In The Care Bears ‘The Care Bears Movie 2’ has a storyline in which a little girl sell her soul to a shape-shifting demon called Dark Heart to get better at sports. Yes, really.

Now we all want to be better at something, but telling kids that it’s basically OK to get it by any means necessary isn’t really responsible in anyone’s book, surely?

I’m not going to go in to too much detail with these, the pictures really do speak for themselves, but how He-Man got away with half the things it did is beyond me and I certainly didn’t notice these things as a kid!

Where the hell are this guy’s pants… 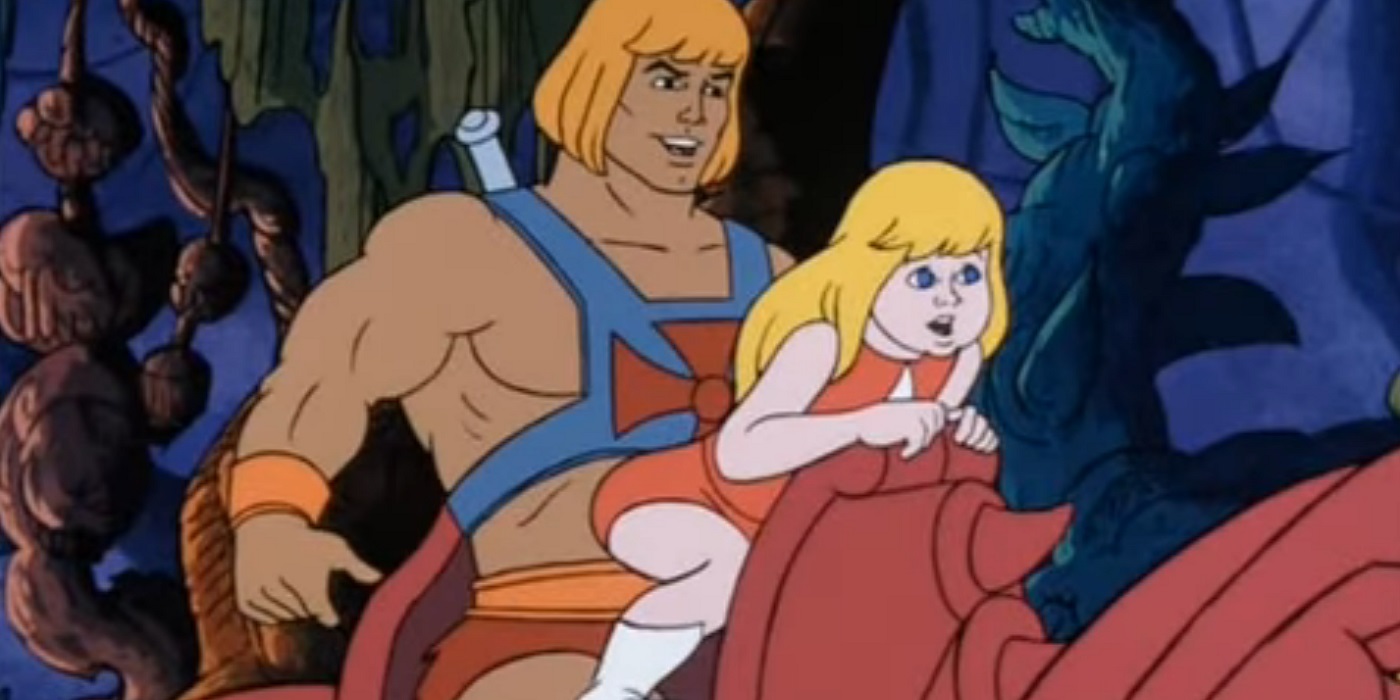 Have these made you look at your favourite cartoons in a totally different light? Did you even notice any of these as a child or are they completely new to you? Have we totally ruined your childhood memories with these making you wish you could un-see them? If so then we apologise, but we had to see them so it’s only fair that you did too!

As always, let us know your thoughts in the comments and share your memories, or any other episodes and moments that we may have missed off the list – I’m sure there are plenty more out there!