10 Of The World’s Most Dangerous Bridges

Bridges. They’re vital building blocks of civilisation. They connect us, literally and figuratively. At their best, they’re majestic feats of engineering, devised by some of the finest minds on the planet and erected by the brawniest beefcakes this side of Dwayne The Rock Johnson.

However not all bridges are made equal. Most are durable, formidable, built from concrete and steel, all the better to remain actually useable. Because one thing bridges absolutely must not be is rickety and given to collapse. 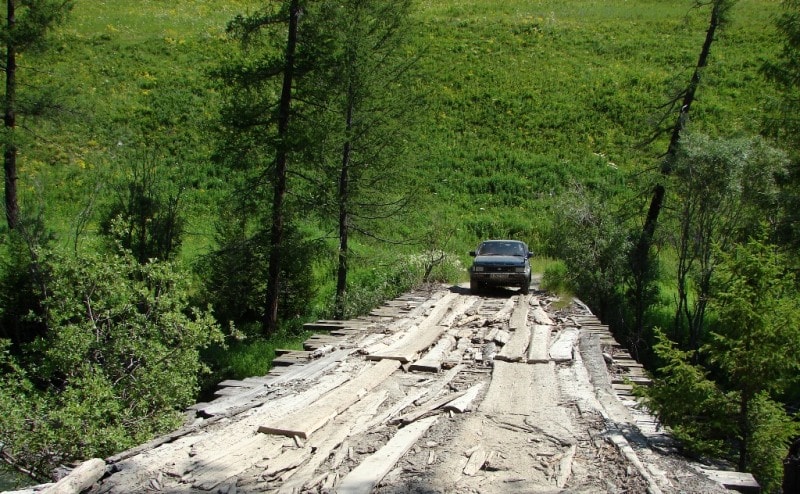 Unfortunately, apparently not everyone got the memo. Gephyrophobics, look away now: this is a list all about substandard bridges. 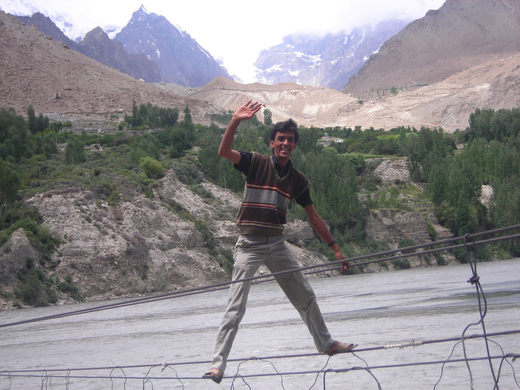 Here are ten bridges you should never attempt to cross, not in a million years, not even on a dare.

No modern construction expert is going to make the argument that bridges should be made out of grass, but would you guess what the people of Peru have gone and done? 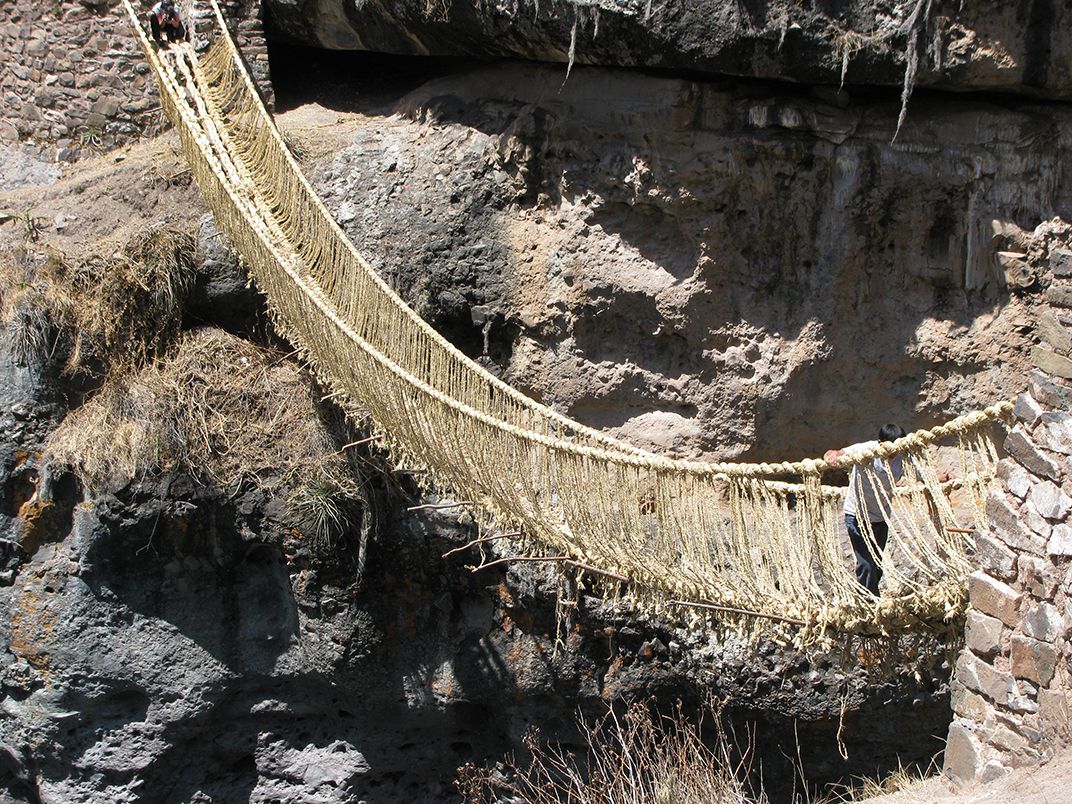 In Huinchi, in the Andes, there remains a relic of the Incan Empire: a bridge made of a fabric woven out of grass and other vegetation found up in the mountains. 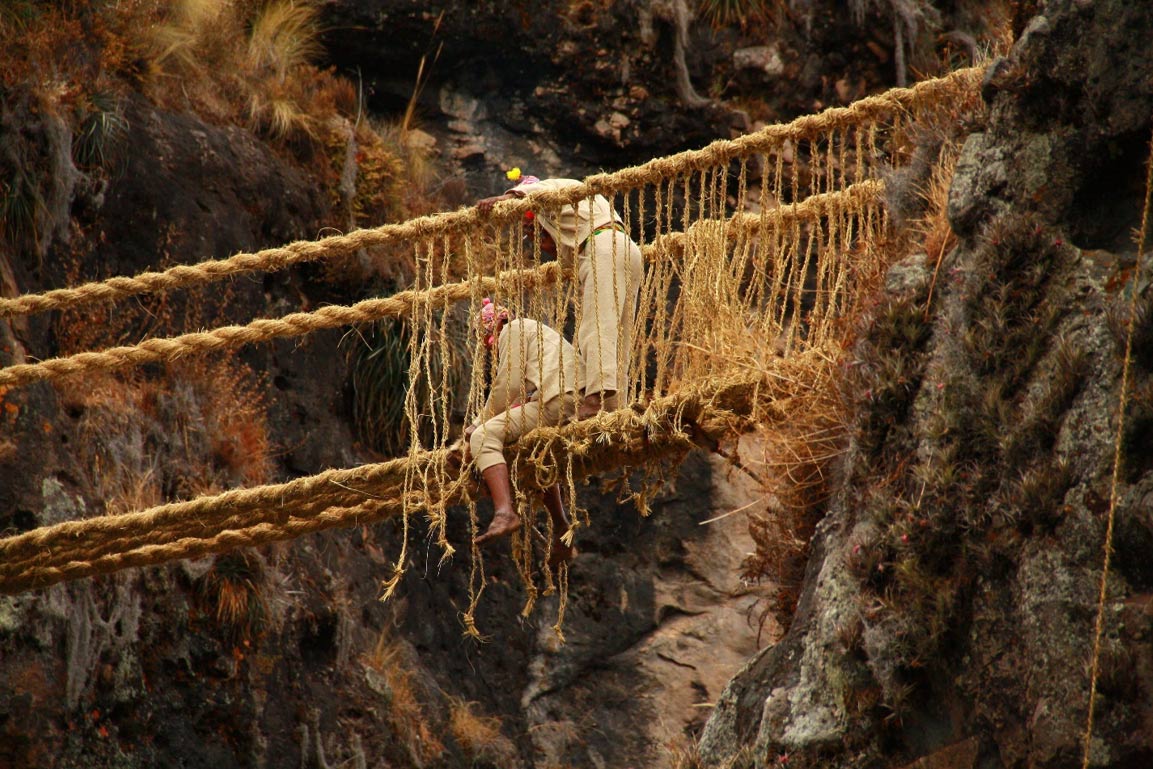 Called the Keshwa Chaca, the last of what was once a system of some 200 bridges still continues to be woven by hand every year by local Peruvians, all of them determined to make this whole grass bridge idea catch on.

Is this really a bridge? Or is it just a bunch of boulders that happen to have collapsed into one another as is gravity’s wont? 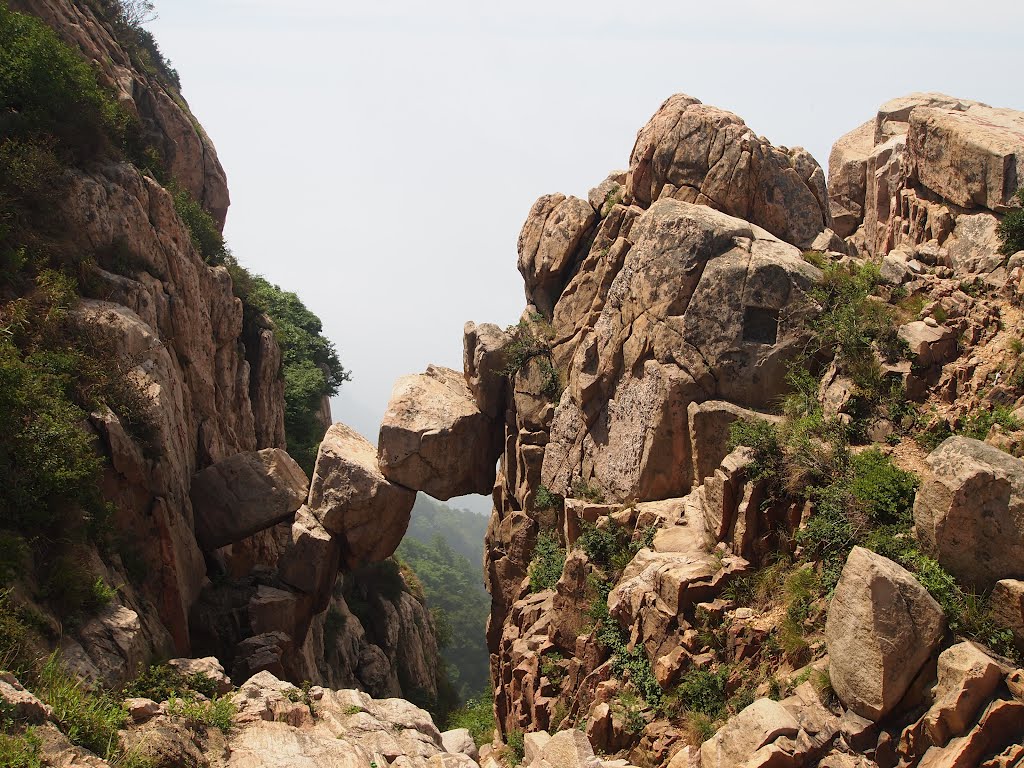 Anyway whatever, this middle finger to modern safety standards is called the Immortal Bridge, and it sits atop Mount Shai in China’s Shandong province. A naturally occurring arch, the Immortal Bridge is thought to have been here since the Ice Age. 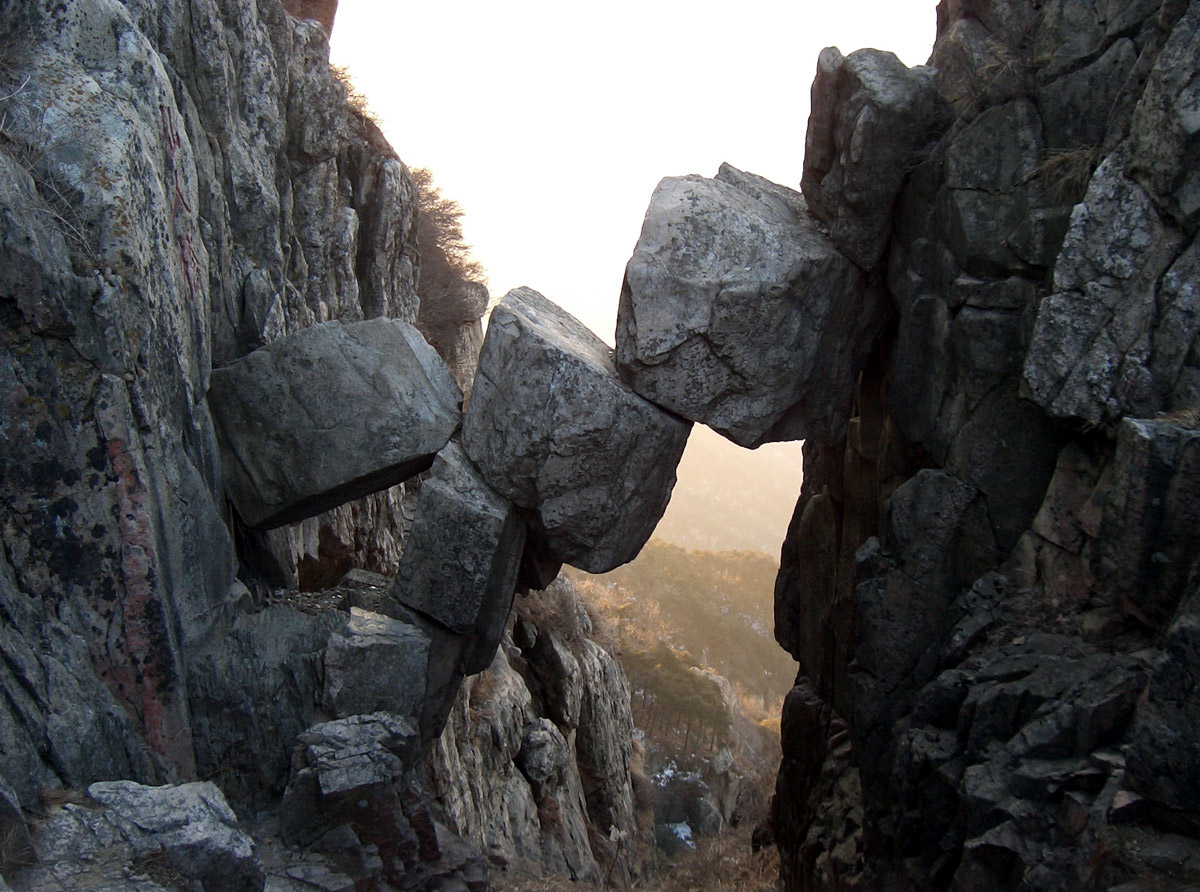 Legend has it that anyone who crosses the bridge successfully will gain immortality, and though that’s yet to be verified, we can with some authority say that anyone who fails to cross will almost certainly have their mortality revoked.

Not all heroes wear capes; as you can see here, some heroes just wear loosely fitting regular clothes, probably to accommodate the size of their massive balls as they traverse a bridge that looks like a simple stiff breeze could destroy it. 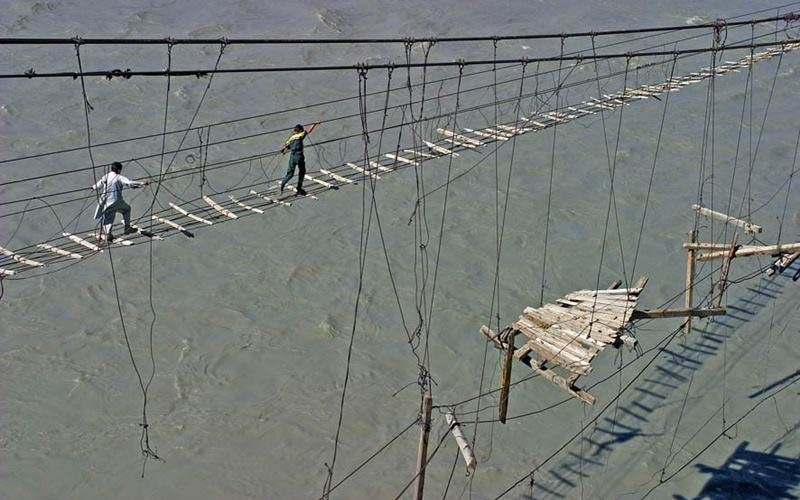 The Hussaini Hanging Bridge, which crosses Borit Lake in Northern Pakistan, is an old rope bridge that has over the years fallen into disrepair, shedding several of its planks. 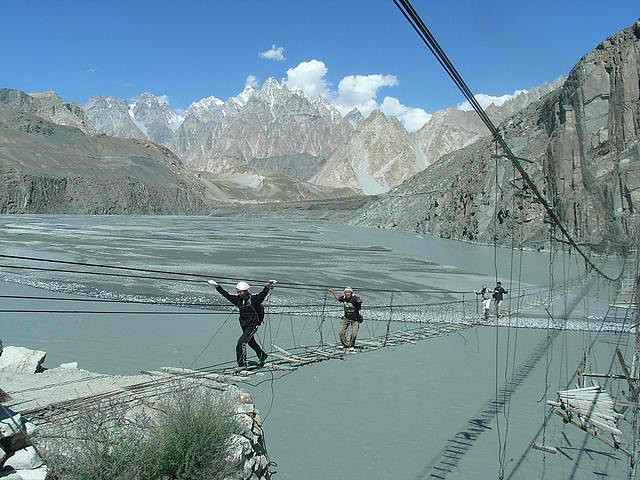 It’s thought that the Hussaini Hanging Bridge may have been washed away in a recent storm, which presumably would be God’s way of telling us all to smarten up and build safer structures.

7. The Old Bridge of Konitsa, Greece

Don’t let this idyllic scene fool you. As much as the image below makes Konitsa in Greece look like Rivendell, the town’s bridge is deceptively dangerous to cross. 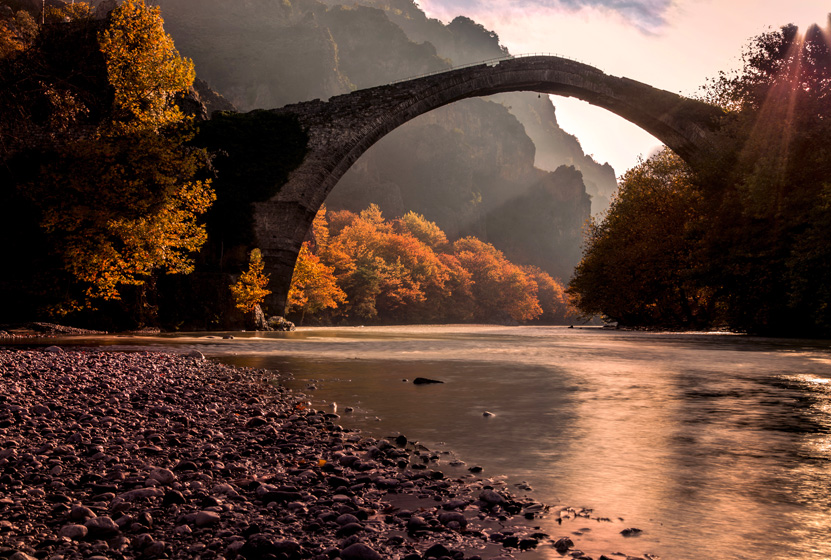 Completed in 1870, the Old Bridge of Konitsa took a whole 45 years to build, which is just embarrassing considering its structural integrity is already under question. 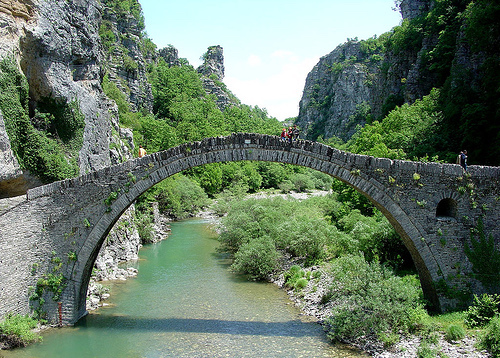 Spanning the river Aoos, underneath the Old Bridge hangs a bell. If the wind is blowing hard enough that the bell is ringing, that’s the signal that the bridge is unsafe to cross.

Watching a truck crossing this bridge in Siberia is like watching that movie Sorcerer by William Friedkin. As with Friedkin’s trucks-in-peril thriller, you wouldn’t be surprised if the vehicle suddenly fell in, killing everyone on board. 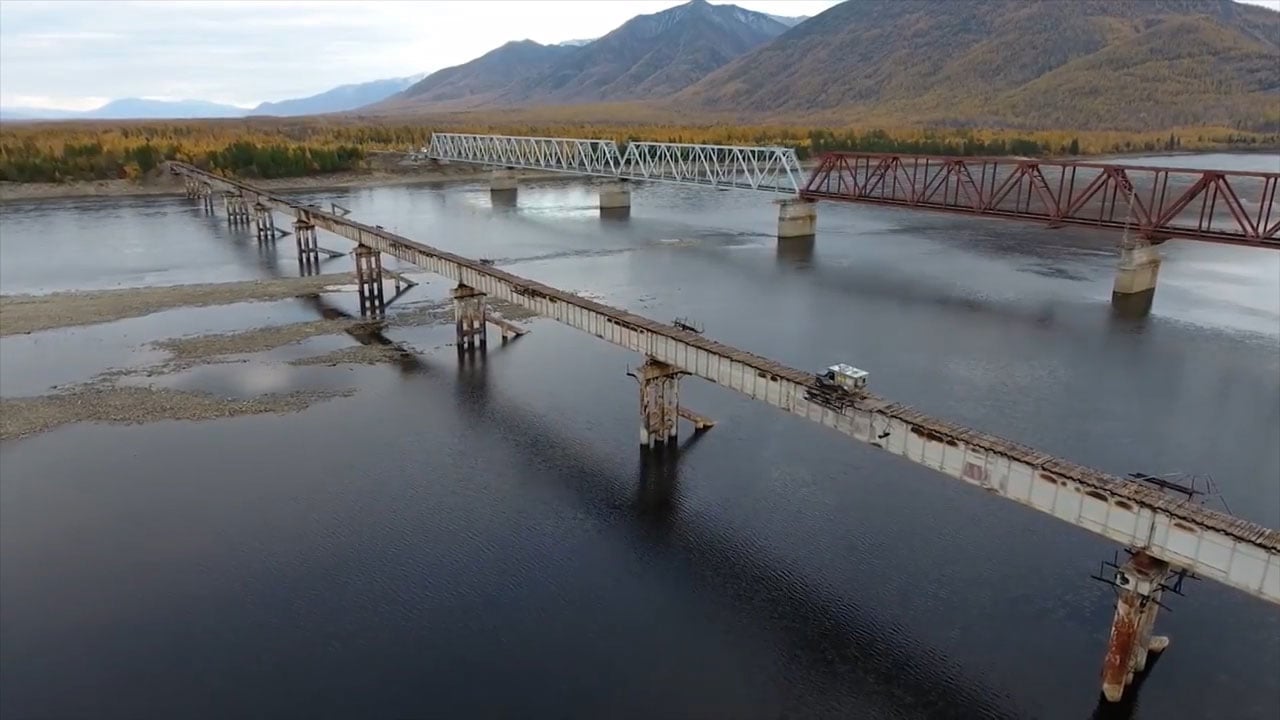 The bridge that crosses Siberia’s Vitim River is just six feet wide, and is made of wood. To make the crossing even more precarious, there are no barriers lining the structure. 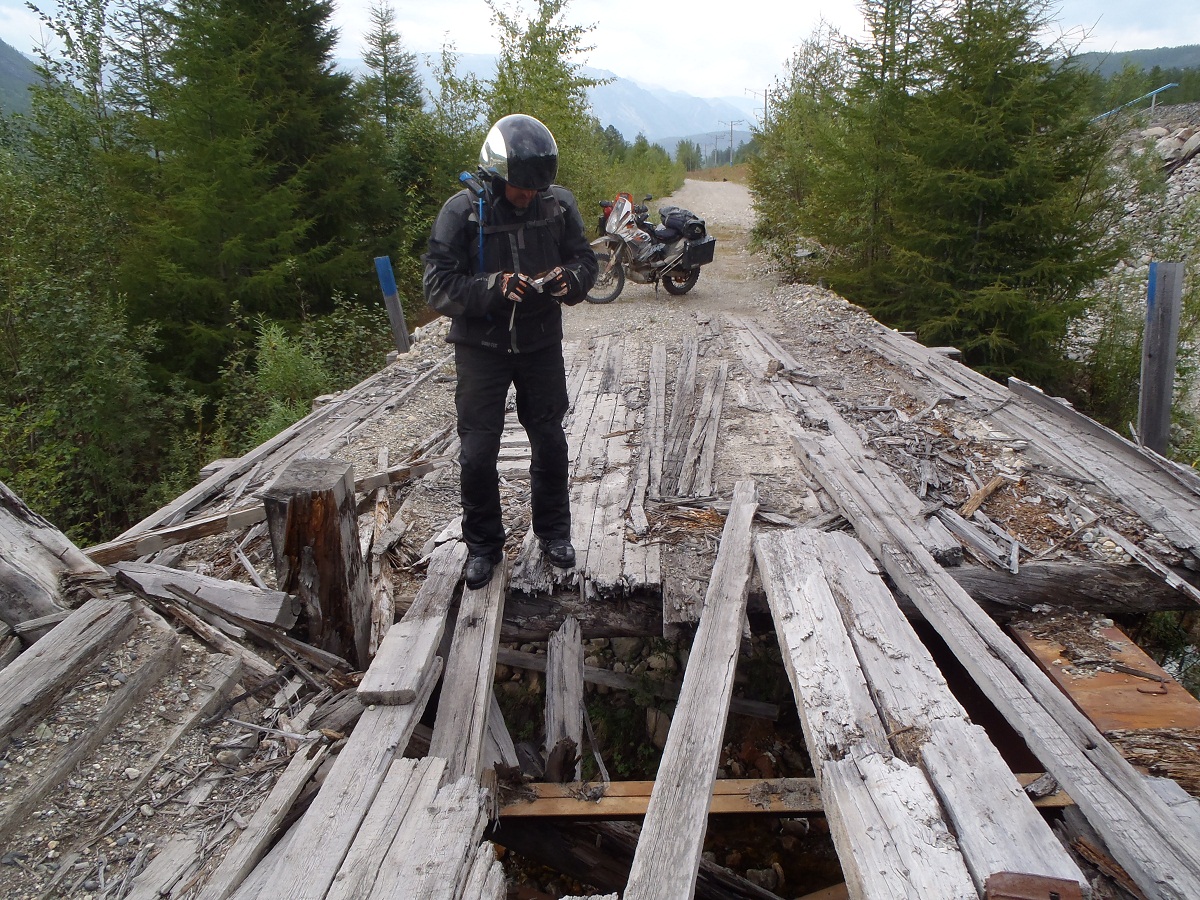 Trying the bridge in winter is especially dangerous, as ice covers the already not-particularly-sturdy wood, turning it into an ice slick. Below waits only freezing water.

12,000 feet up in the French Alps, there sits the short but ominous Aiguille du Midi bridge. 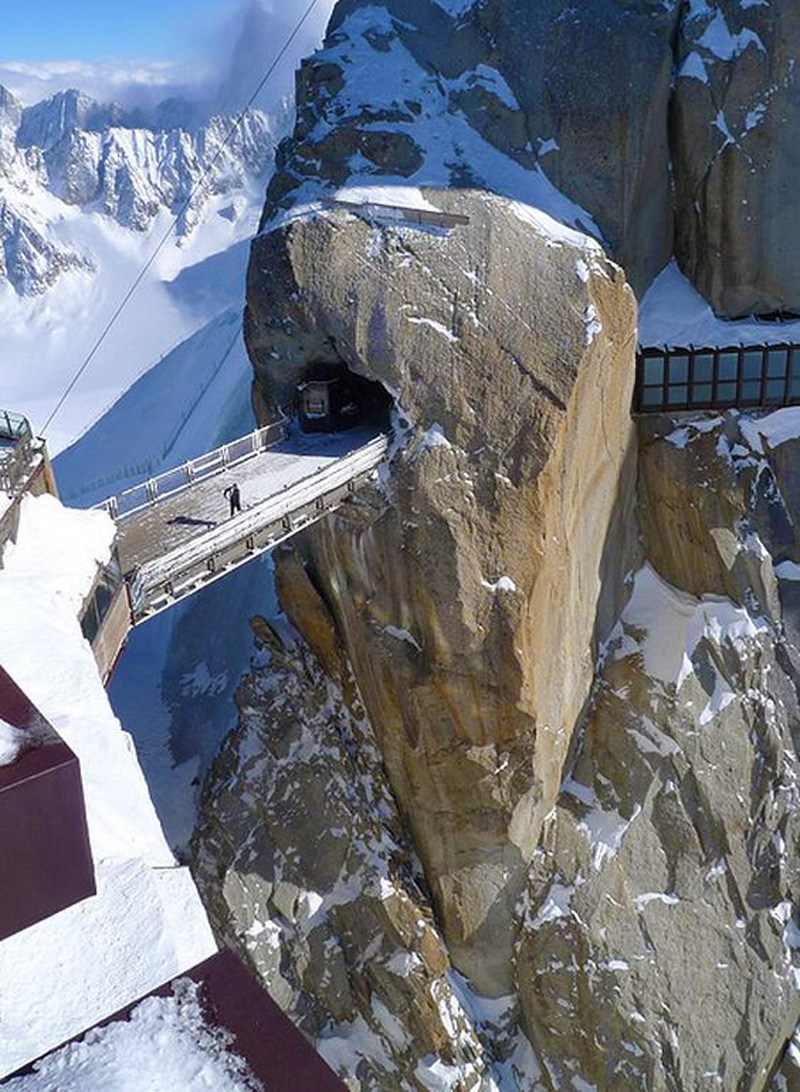 Narrow, built from wood and overlooking a hell-drop into gallic oblivion, the Aiguille du Midi bridge is the only connection to Mont Blanc’s Chamonix ski resort from the cable car. 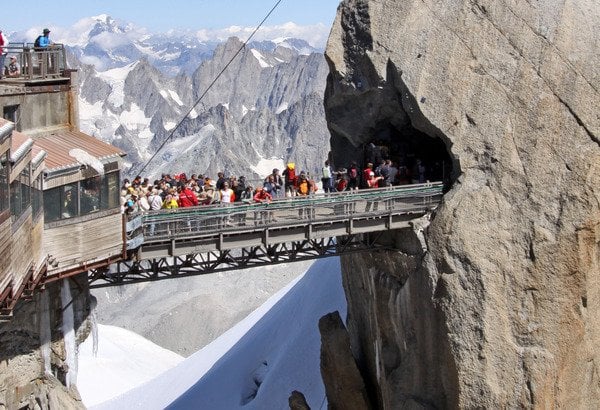 Holidaying here will either cure an acrophobic’s fear of heights or leave them, like Jimmy Stewart in the 1956 Alfred Hitchcock classic Vertigo, incapable of functioning normally ever again.

Pro tip: if a bridge has nicknames like ‘The Bridge of Death’ and ‘Oh My God Bridge’, you don’t cross, you just get out of the country, we’re done. 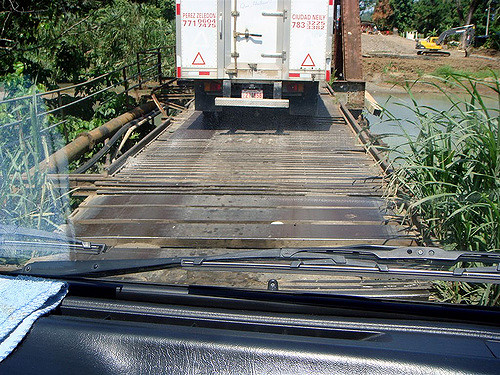 Quepos Bridge in Costa Rica, which sits between the Pacific coastal towns of Quepos and Jaco, was originally built in the 1930s for trains to haul bananas up the coast. 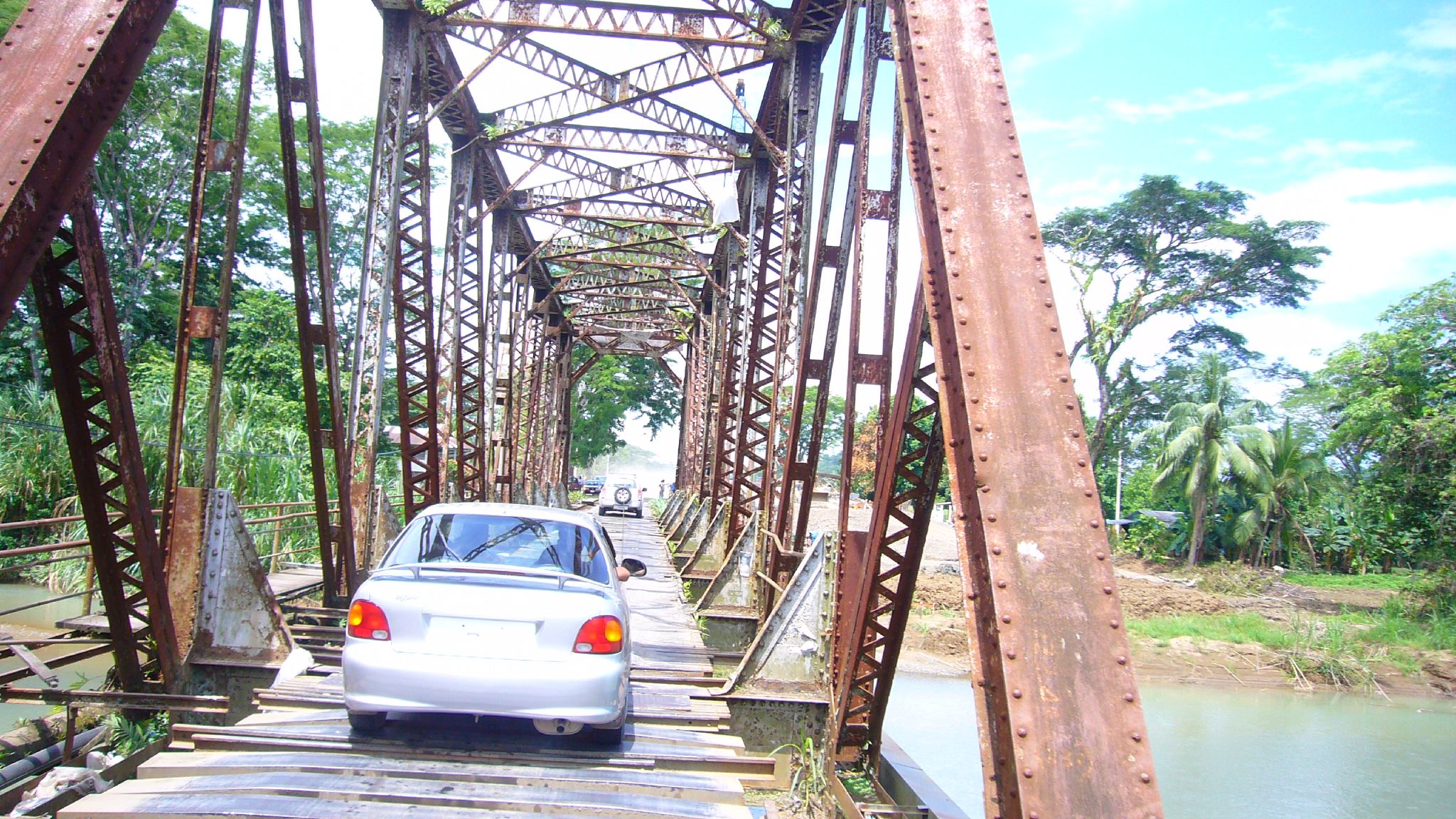 Today, you wouldn’t put money on a scooter being able to cross it: vehicles can only go across the bridge one way, while the rusting structure itself shudders from the weight of any traffic.

Considering how supposedly safe and structurally sound Vancouver’s Capilano Suspension Bridge is, it sure has seen a lot of unfortunate accidents over the years. 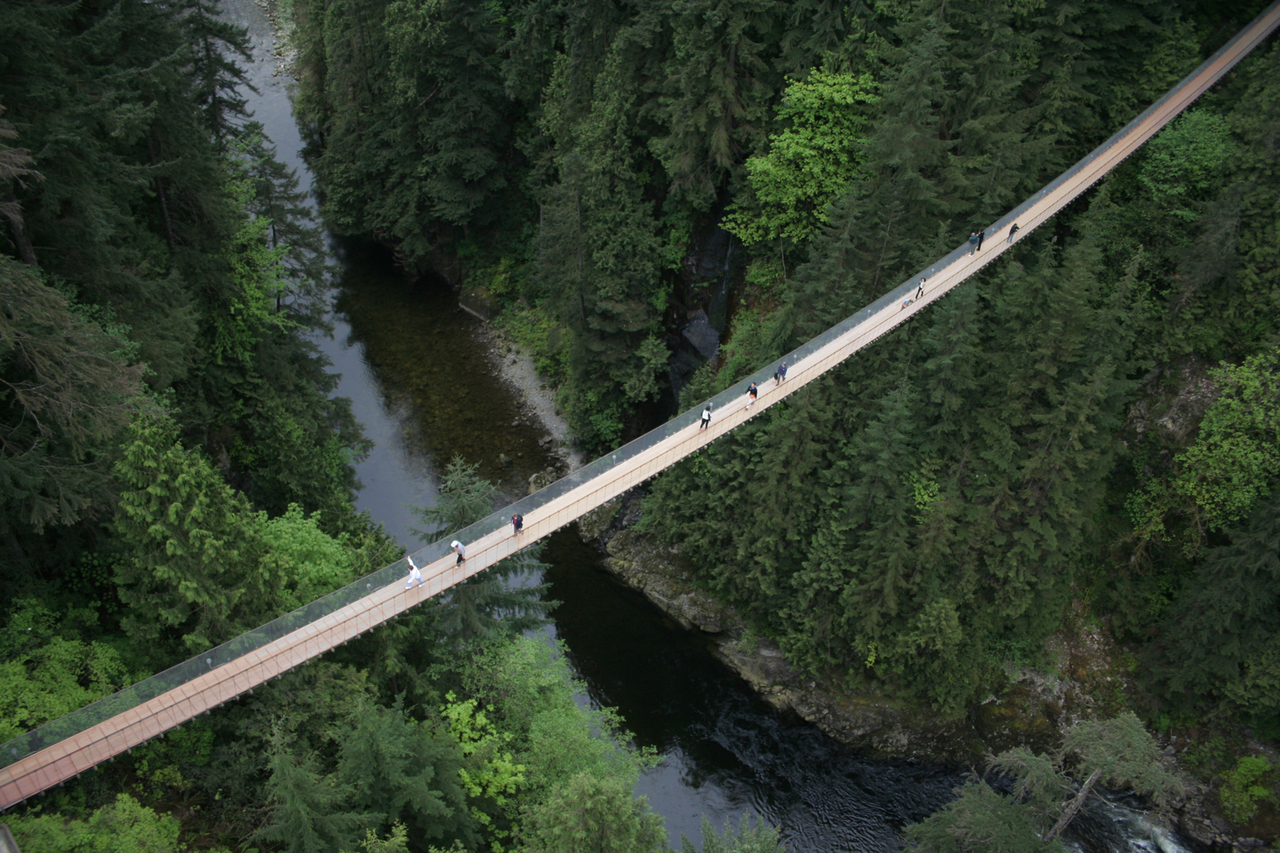 Since the original Capilano bridge was rebuilt and made into a tourist attraction in the 80s, there have been bridge-crippling snowstorms, one almost fatal accident and two deaths. 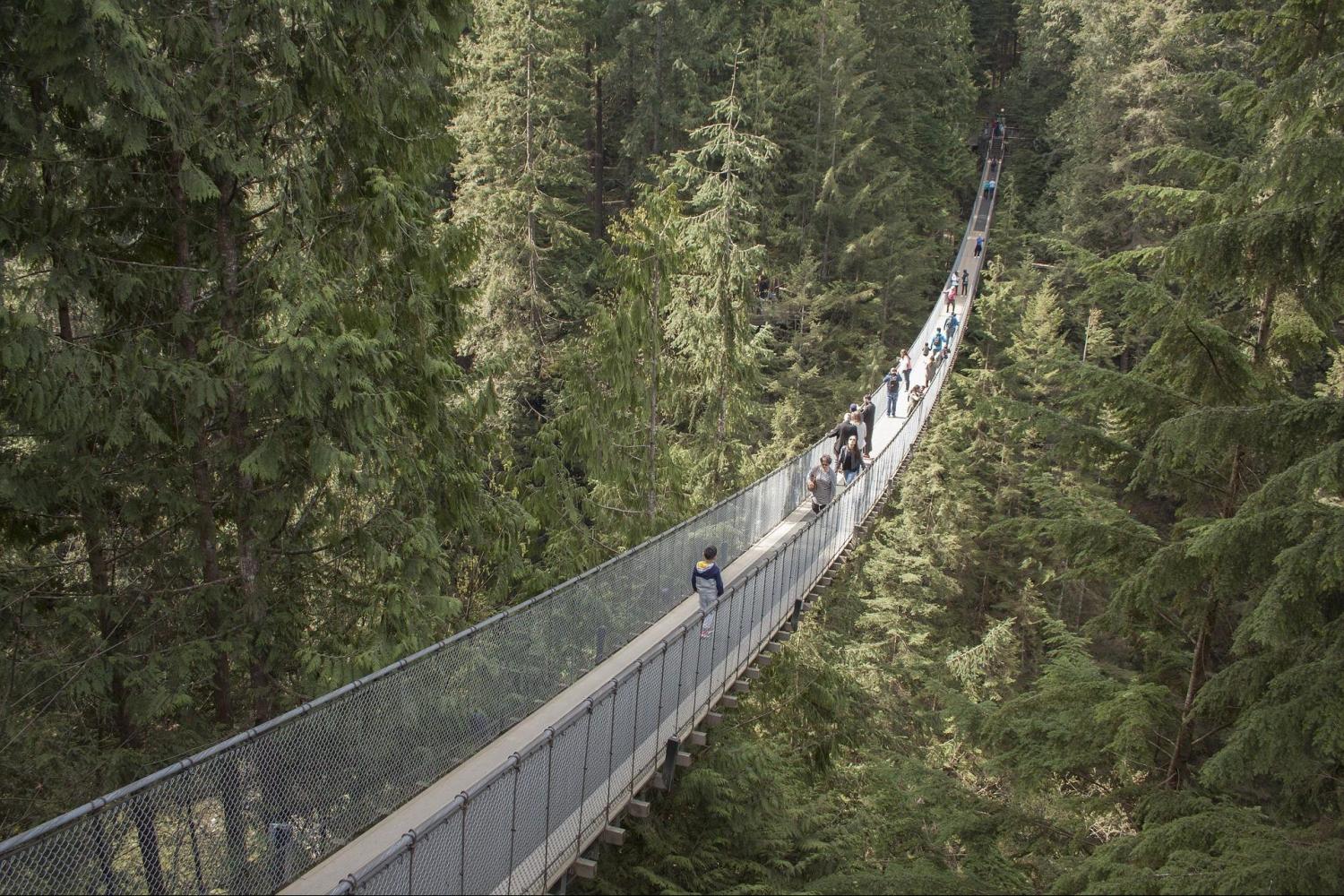 “Tourists need to understand that when we put up signs and warnings, we really, really mean it”, said a British Columbia coroner in 2012, after a 30-year-old tourist fell off the bridge to his death.

Nope, no way; this thing definitely wasn’t built to code. This is Alam Bridge in Baltistan, in the north of Pakistan, and that truck probably shouldn’t have been given permission to cross it. 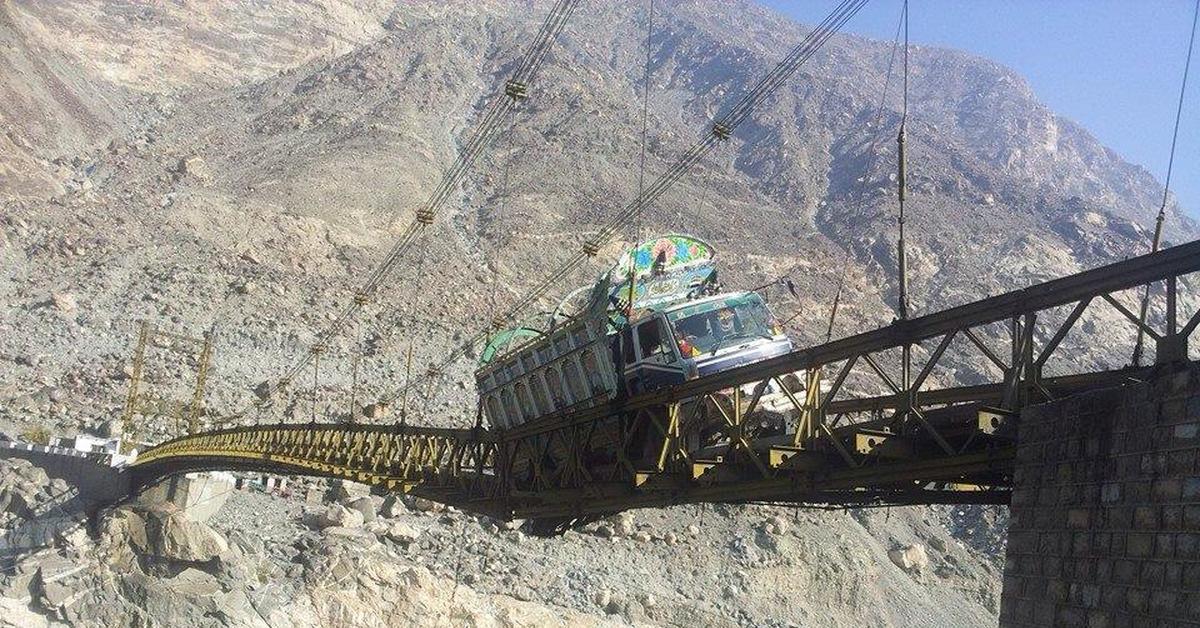 That’s right: this bridge is so dangerous, you actually need permission to use it from local authorities stationed at either side. Anything weighing over 20 tonnes is denied access. 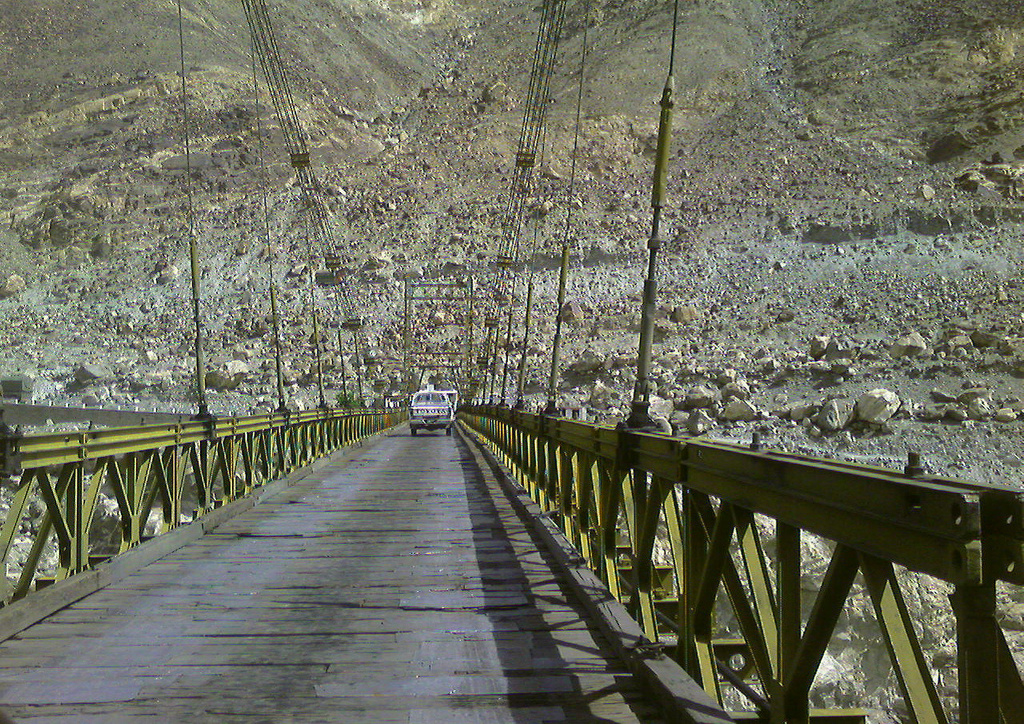 Vehicles making the crossing also have to stick to a strict speed limit, lest they wish to incur the structure’s wrath: in 2014, Baltistan was temporarily cut off from the rest of Pakistan when a particularly heavy truck caused part of the bridge to collapse.

Let’s just say that if the Kazakhstani government wanted to correct the negative portrayal Borat gave of the country, they really should have done something about their roads. 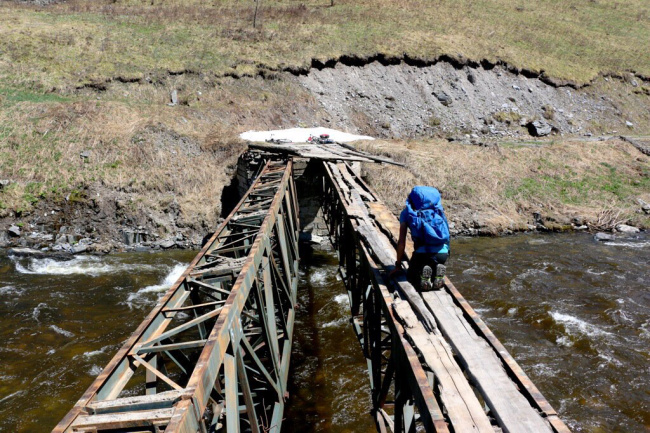 What we have here is a bridge along the Austrian Road, in East Kazakhstan. Why is a road in Kazakhstan called the ‘Austrian Road’, you ask? Oh that’s just because it was built by Austro-Hungarian prisoners of war way back in WWI. 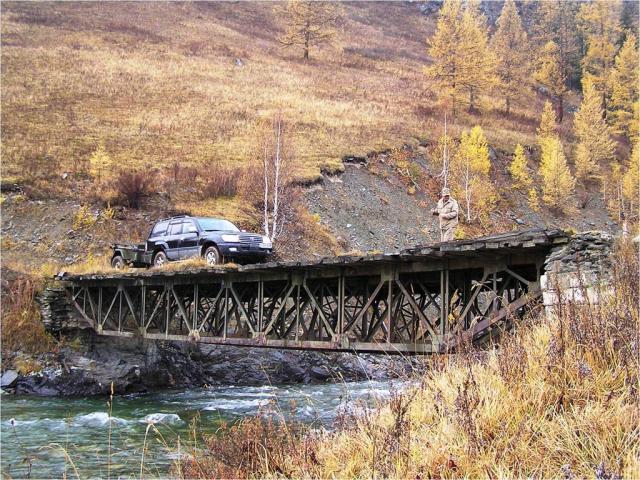 Since then, the road has begun to break down, with some of the bridges along the way having partially collapsed, understandable considering they were built by a disgruntled chain gang more than 100 years ago.