10 Times People Trying To Be A Kid Again Failed Disastrously

Everyone wants to recapture their childhood. Whether they do it by buying adult colouring books, dressing up as their favourite movie characters, or just eating Lunchables at 3am while watching nostalgic cartoons. With that said, some people have an even simpler approach – just going to playgrounds and pretending they’re still a kid. 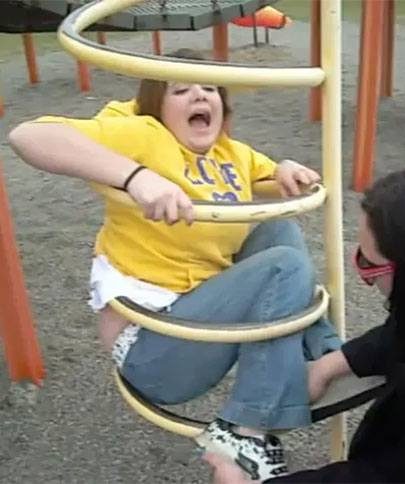 It’s easy to look at a swing and think “I’m probably too big for that”, even if you then go and try to swing on it anyway. However, for bizarre contraptions like this, it becomes a little harder to predict the outcome.

This woman obviously figured that since she was skinnier than the gap in the middle of the spiral, she could climb up with ease. The problem with that is that when you bend your knees… you get a lot wider.

9.When you have to leave through the window 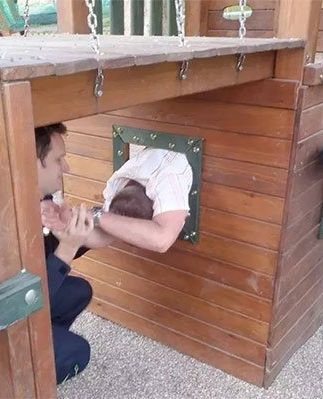 Given that this man was playing on a playground in the first place, and that he decided to crawl into the only space that even the kids aren’t supposed to crawl through, it’s not a huge leap to imagine that alcohol was involved here.

Another reason to believe that is that their exit strategy is just not going to work – since he’s way longer than the gap between the window and the wall. 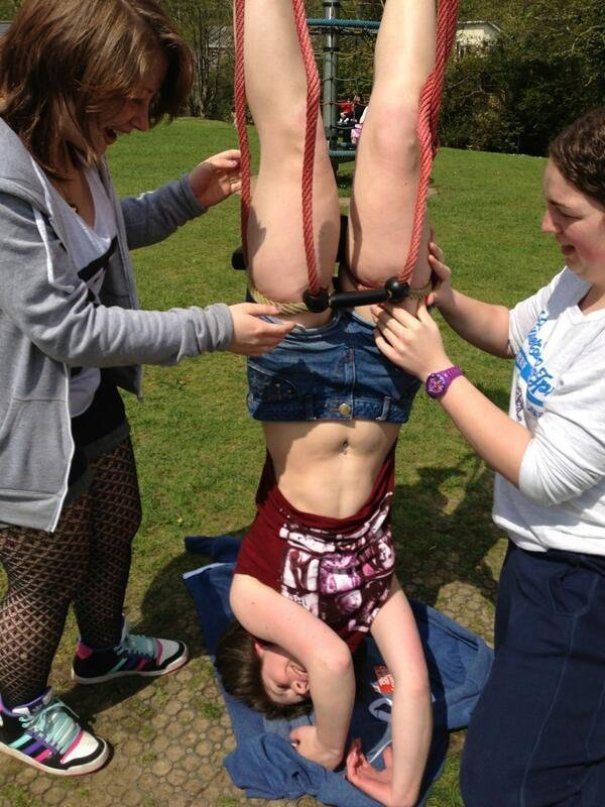 When you go to any playground worth its salt, there will be two kinds of swings. The first kind is for kids of any age, and is completely open. The other kind is a baby swing, which has a harness to keep the baby safe. Those ones are… harder to navigate.

This girl fell into the trap of thinking that just because she could make her legs fit into the slots, that she’d be able to get them out again too. With that said, she is doing a better job of getting out of the swing than most other people on this list.

7. Keeping cool in a crisis

Apparently the dude’s torso was just too wide to fit, so when he tried to slide out sideways he only made himself more stuck. That led to a very embarrassing run-in with the firemen, who seem to be finding it a lot funnier than he is.

6. No-one in this picture is finding it funny 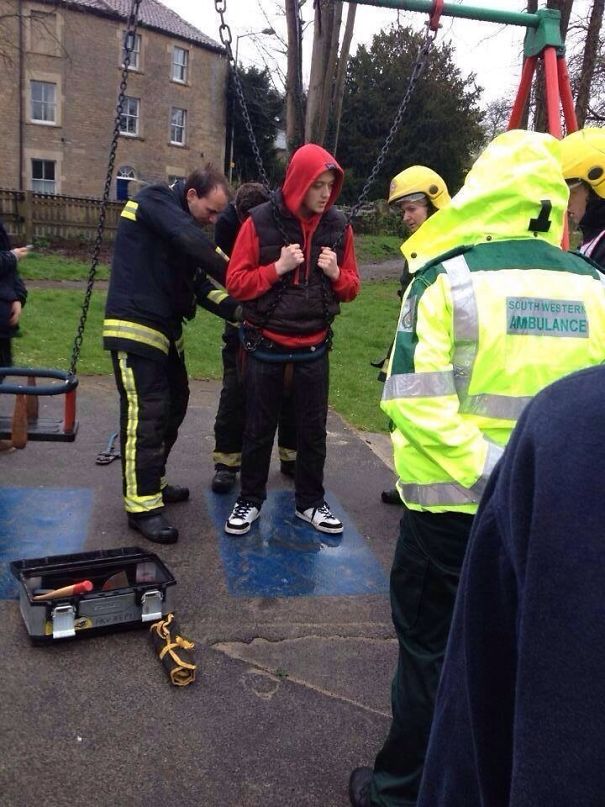 A fireman’s job is weird, because it has such extreme highs and lows. On the one hand, they’re running into burning houses and scaling buildings to rescue people from windows. On the other hand, they’re rescuing cats from trees and cutting people out of playground attractions.

That’s got to get annoying at times, especially since they should be on call for someone in real danger. Add in the rain, and you get a situation where no-one wants to be there.

5. The look of defeat 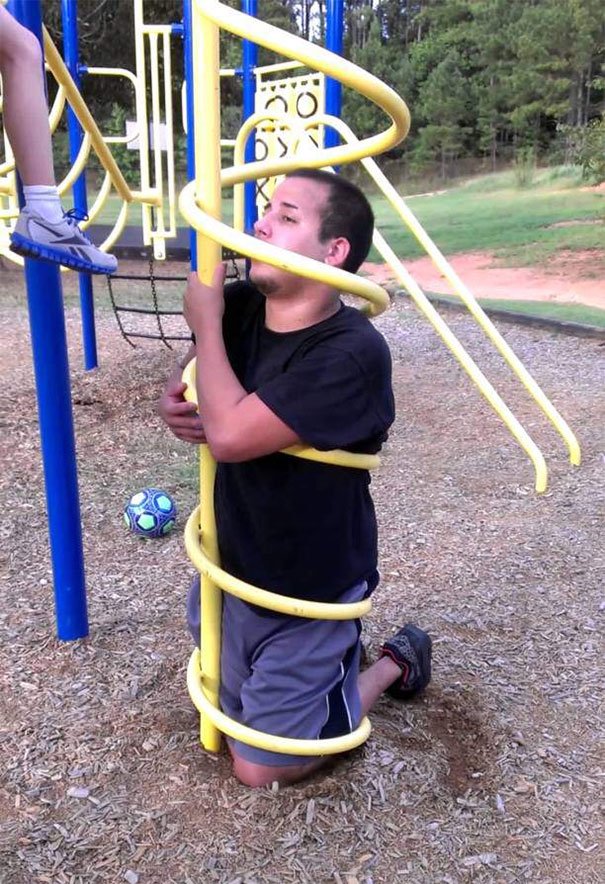 For most of the trapped people on this list, it’s easy to see how they could get out – it might take a lot of time and some careful manoeuvring, but they could eventually find their way free.

With that said, there’s no way to imagine this guy walking free, at least not without the aid of some seriously dangerous metal cutters, and probably a cheque to the council responsible for the playground.

4. I’m not even sure how this one happened 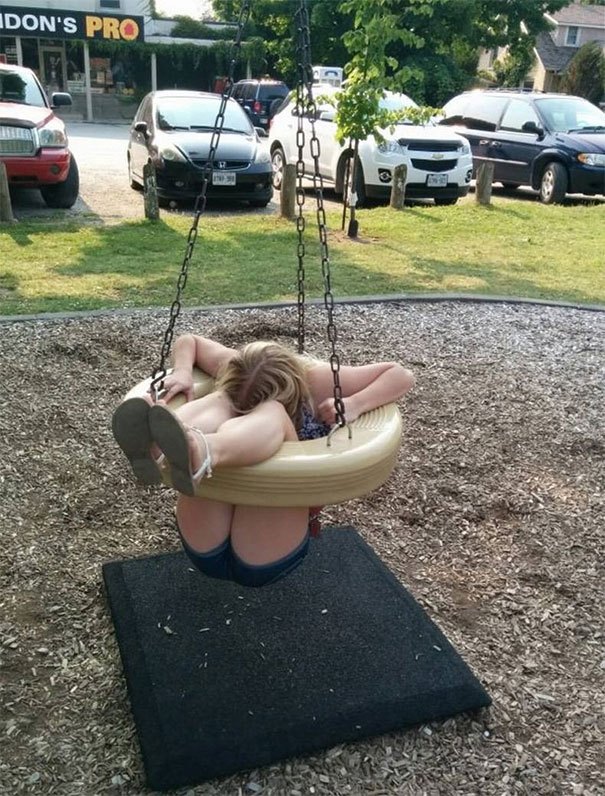 The good news about this particular situation is that it’s pretty easy to fix. The bad news is, fixing it either involves seriously bruising your tailbone, or getting severe friction burns on your thighs.

However, despite the two simple strategies to get themselves out of this problem, this woman has apparently just decided to accept her new life as a playground troll, which I guess we have to respect.

3. Sometimes all you need is a helping hand 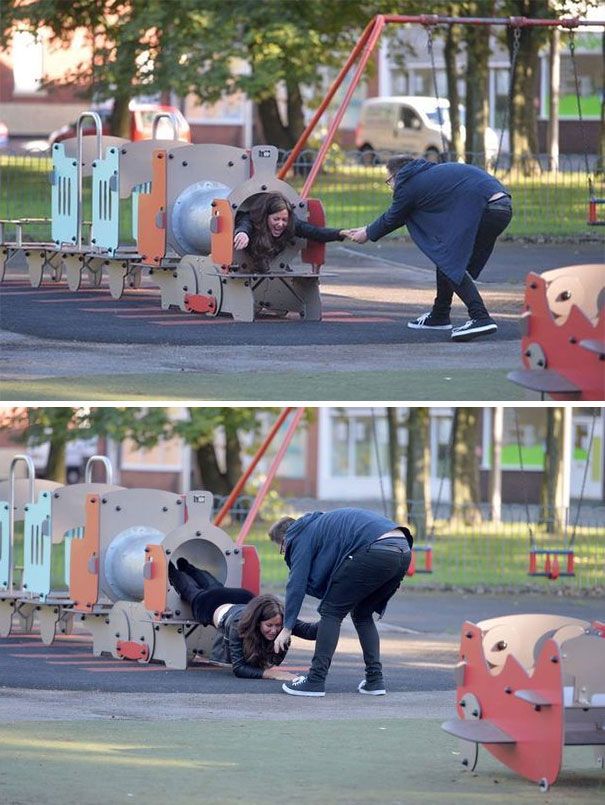 Out of all the playground instruments to get stuck in, slides have got to be the scariest. Get stuck with your head sticking out of one end or the other and it’s probably fine, but otherwise you’re literally stuck in a tiny metal tube.

Thankfully this woman managed to get her head free, and it was only her hips that got stuck. Even better, she was able to slide free without the firemen getting involved, even if her ego probably got a little bruised on the way down.

2. Not sure taking the shoes off actually helped 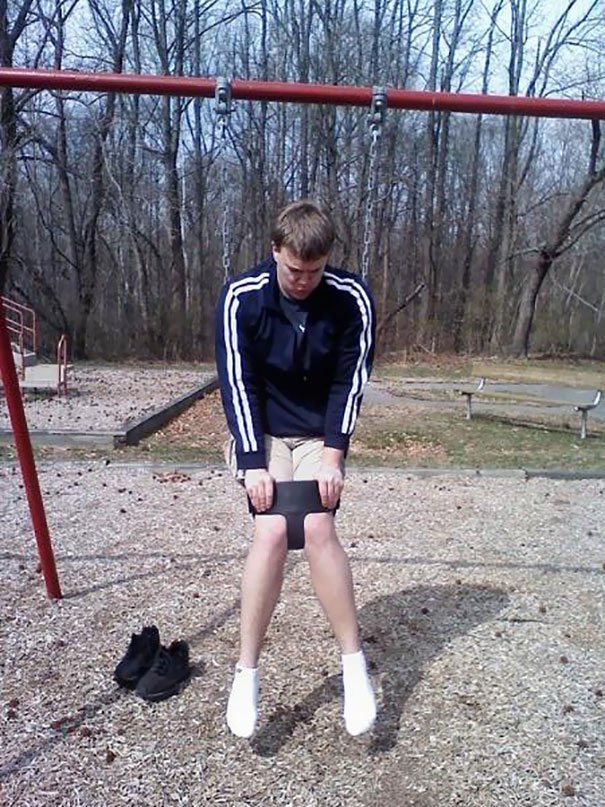 We’ve already discussed how getting into a baby swing can be an irreversible mistake, but it’s important to remember that there are different kinds of baby swing. Some are secured just by chains or straps, but others are just fully moulded rubber.

The thing about the first kind is that if you do get stuck, you’ve at least got a little bit of wiggle room. Get trapped in the second kind, and it’s basically all over. 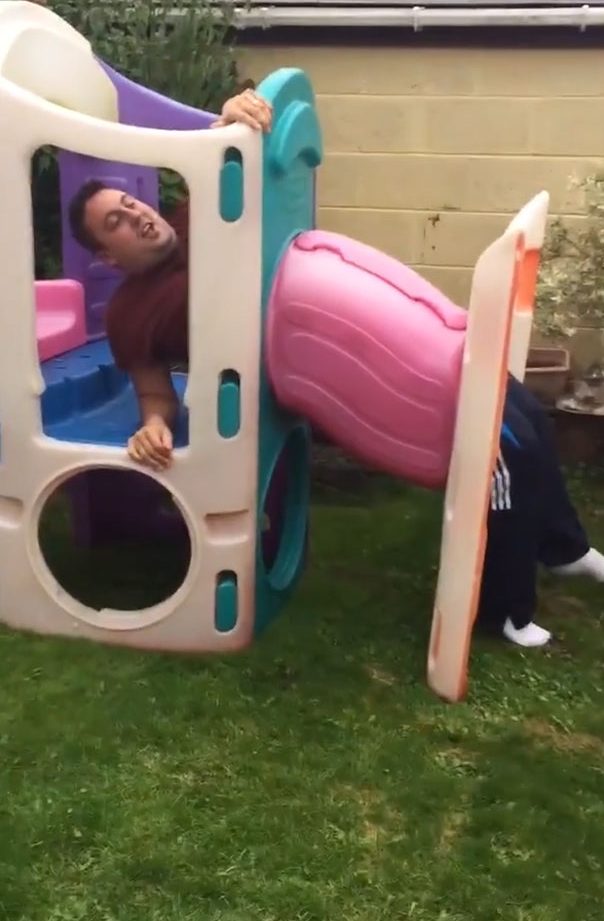 All of the mishaps on this list happened in playgrounds in various countries around the world, but apparently you’re not even safe from playground instruments in your own backyard.

This man built a mini play area for his kid in his back garden, but when he tried to test it out it turned on him viciously, and they probably freed him by taking the whole thing about just to build it again.