10 Things You May Have Missed In Flash Gordon

Despite the fact that it was a box office failure elsewhere, the 1980 Flash Gordon film was a big hit in the UK. Perhaps it was because we ‘got’ the camp humour, or perhaps it was down to our love of the rock band Queen, who of course supplied the films iconic soundtrack. But whatever the reason, it’s a film that we’ve watched multiple times over the years, and we bet that we’re not alone! 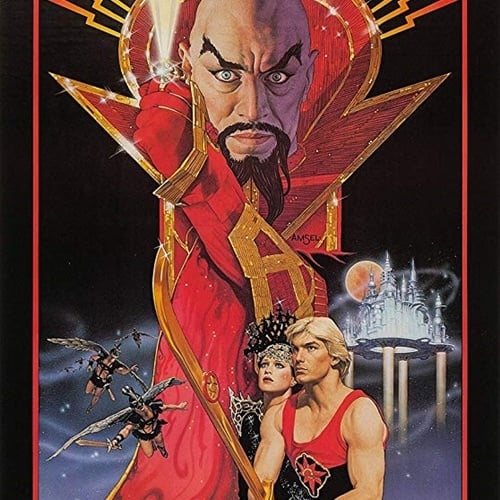 Below are 10 things that even hardcore fans of this film may have missed, despite repeated viewings, but be sure to post a comment letting us know how many you had already spotted!

And be sure to share this post with other people you know who are fans of this brilliant film, so they too can find out about some of the facts and mistakes that may have passed them by!

1. It Features A Blue Peter Presenter 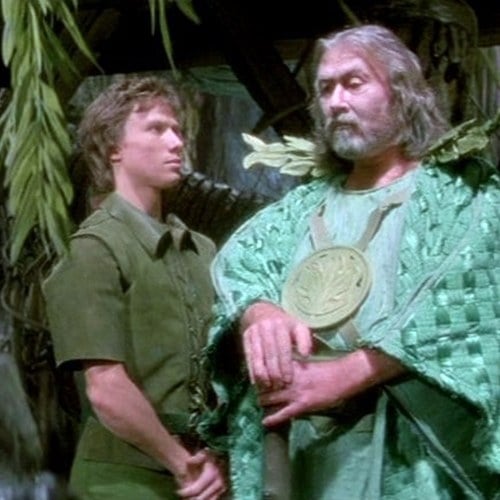 Yes, believe it or not, former Blue Peter presenter Peter Duncan features in a scary scene where he is horrifically stung by a ‘Wood Beast’.

His performance is actually pretty good, despite the fact that he has to speak out the terrible line “Spare me the madness!” before being put out of his misery by Timothy Dalton.

2. It Has Inconsistent Meteorites Right from the start of this film we get the impression that the special effects are not going to be the very best.

Because for example, whilst the first meteorite creates a large amount of steam, the second once creates absolutely none whatsoever!

3. The Hawkmen’s Wires Are Often Visible 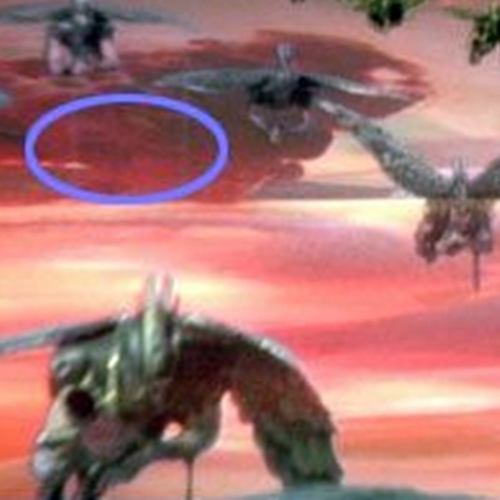 Whilst we’re fully aware that the Hawkmen are not actually flying, being able to see the wires holding some of them up does rather spoil the illusion somewhat.

Luckily, we were too distracted by Brian Blessed’s booming voice to notice this at the time! 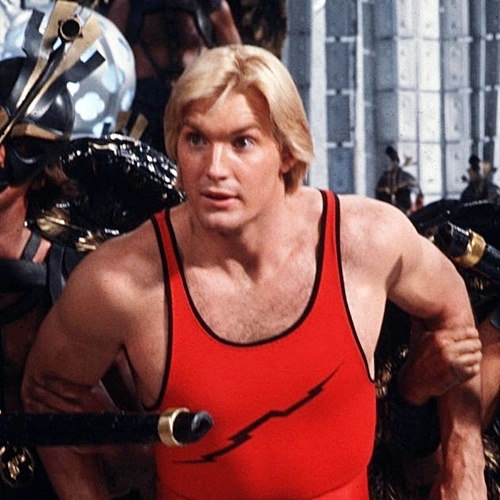 Sam J. Jones, who plays Flash, recently revealed that he actually left the film before post production had finished.

This was due to disagreements with the film’s producers, and it meant that a large amount of his dialogue was re-dubbed by a voice actor, whose identity has never been revealed!

5. No-One Is Getting Even Slightly Hurt 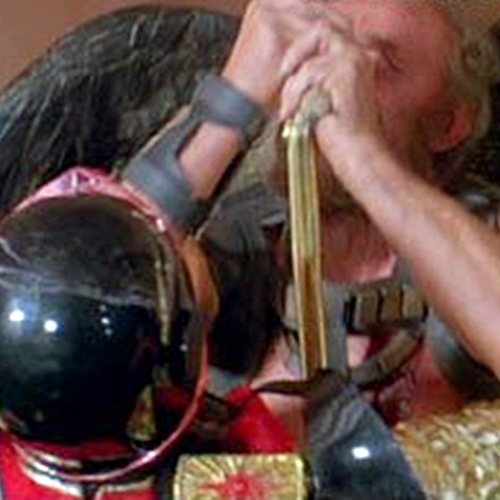 Something else that spoils the illusion somewhat happens during a few of the fight scenes.

Because, whilst we’re being led to believe that bad guy soldiers are being stabbed, on closer inspection you can clearly see swords being angled to avoid them making any contact whatsoever!

6. Lighting Changes From One Shot To The Next 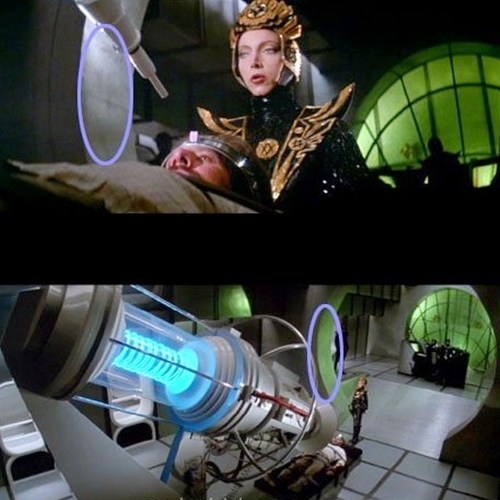 Whilst we know that perfect continuity in movies is pretty much impossible to pull off, there are so many errors in Flash Gordon that we do sometimes have to hold our head in our hands.

An example is a wall being lit green in one shot but not at all in the next. Who stole the light? 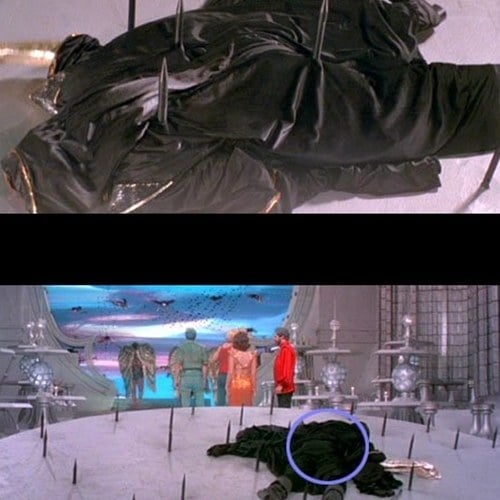 Do you remember the scene when Flash battles Prince Barin atop some flimsy looking wobbling spike platforms?

Well, you may not have noticed that the spikes piercing the fallen Prince are clearly visible in the close up shot, but cannot be seen at all only seconds later! 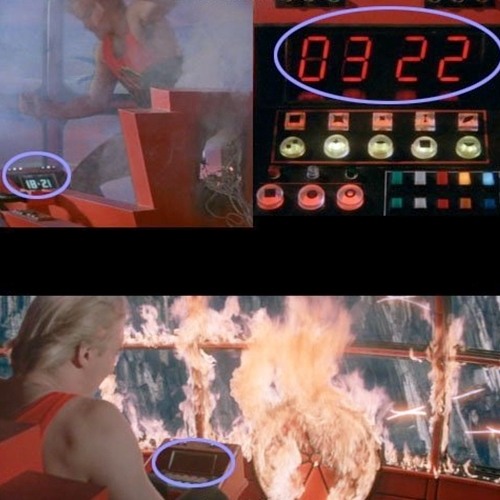 “Flash I love you, but we only have fourteen hours to save the Earth!”

Or do we have 18 minutes? Or 3 minutes? Or is the display blank completely? And is remaining time displayed in green or in red?

9. It Lost Its Identity 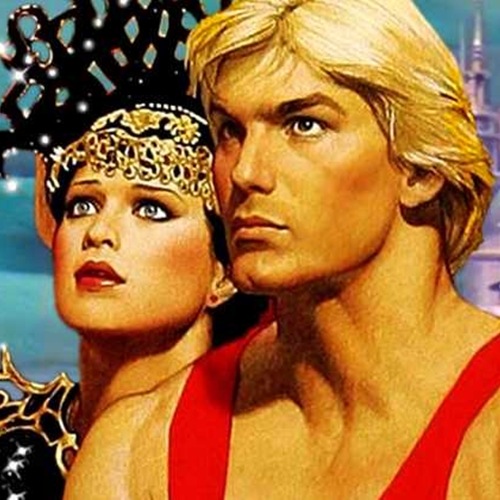 Flash Gordon’s co-writer Lorenzo Semple Jr thought the film was a bit of a mess, once claiming that one of the producers wanted it to be funny, whilst others thought it should be more serious.

He was quoted as saying that “We kept fiddling around with the script, trying to decide whether to be funny or realistic. That was a catastrophic thing to do, with so much money involved” 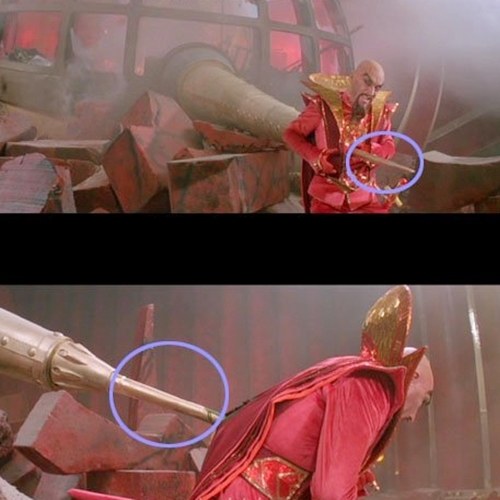 Ming decided to attack Earth out of boredom and ended up impaled by his own war rocket, the tip of which changes angle from one shot to the next!

Sadly that’s all for now. Be sure to share this post with your fellow Eighties Kids, so that they too can find out more about this brilliant cult classic!