Moulin Rouge! is a musical like no other. A high-camp extravaganza of elaborate costumes, deliberately artificial set design and 20th century pop songs in a 19th century setting. It could only have been the brainchild of visionary director Baz Luhrmann.

Watching Moulin Rouge!, it looks like a great deal of hard work went into the film – and that’s more true than you might have known. To complete what might be his masterpiece, Luhrmann had to suffer a death in the family, serious injury inflicted on his cast and being turfed out of the film studio early by the biggest movie franchise of the time.

Here are some things you never knew about Moulin Rouge!, and the trials cast and crew went through to make the film a reality.

10. Nicole Kidman broke a rib fitting into a corset 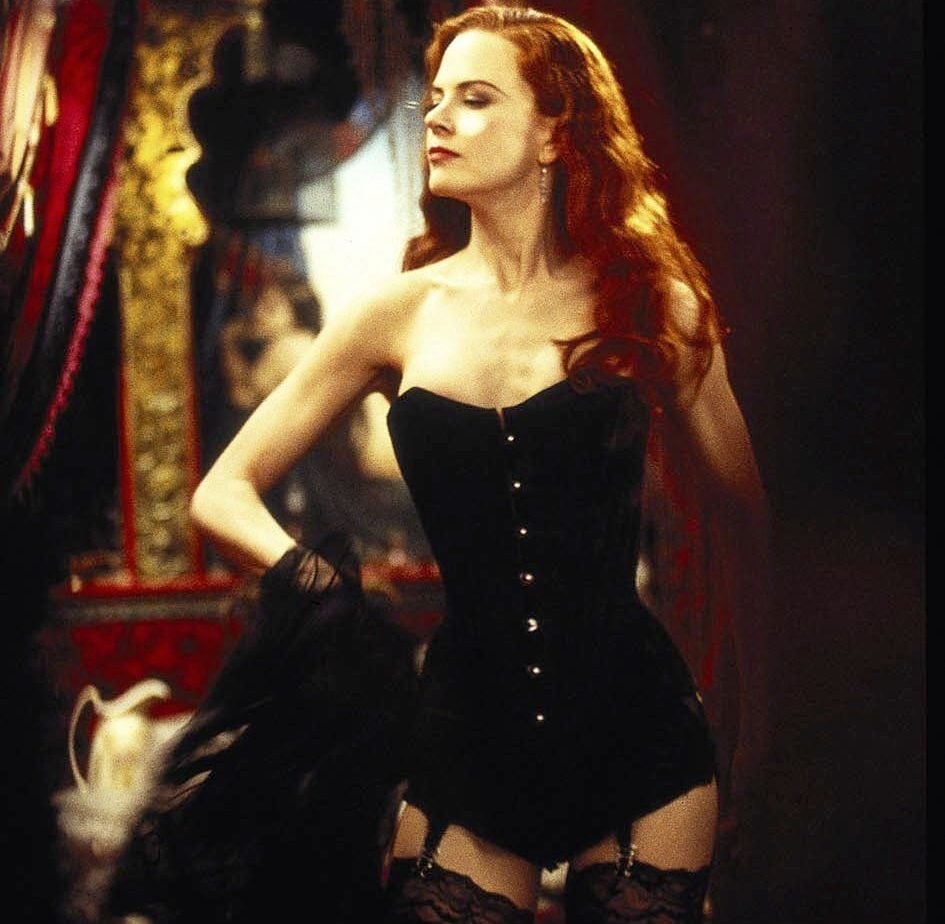 Kidman’s dedication saw her injure one of her knees and break a rib – twice. The first time, Kidman was “dancing in heels at three in the morning and I fell downstairs”. The second time? “[I] re-broke my rib getting into a corset.”

“I had this thing that I wanted to get my waist down to 18 inches, which Vivien Leigh had on Gone with the Wind and I was just like, ‘tighter, tighter!'”

9. The injury forced Kidman to drop out of the lead role in Panic Room 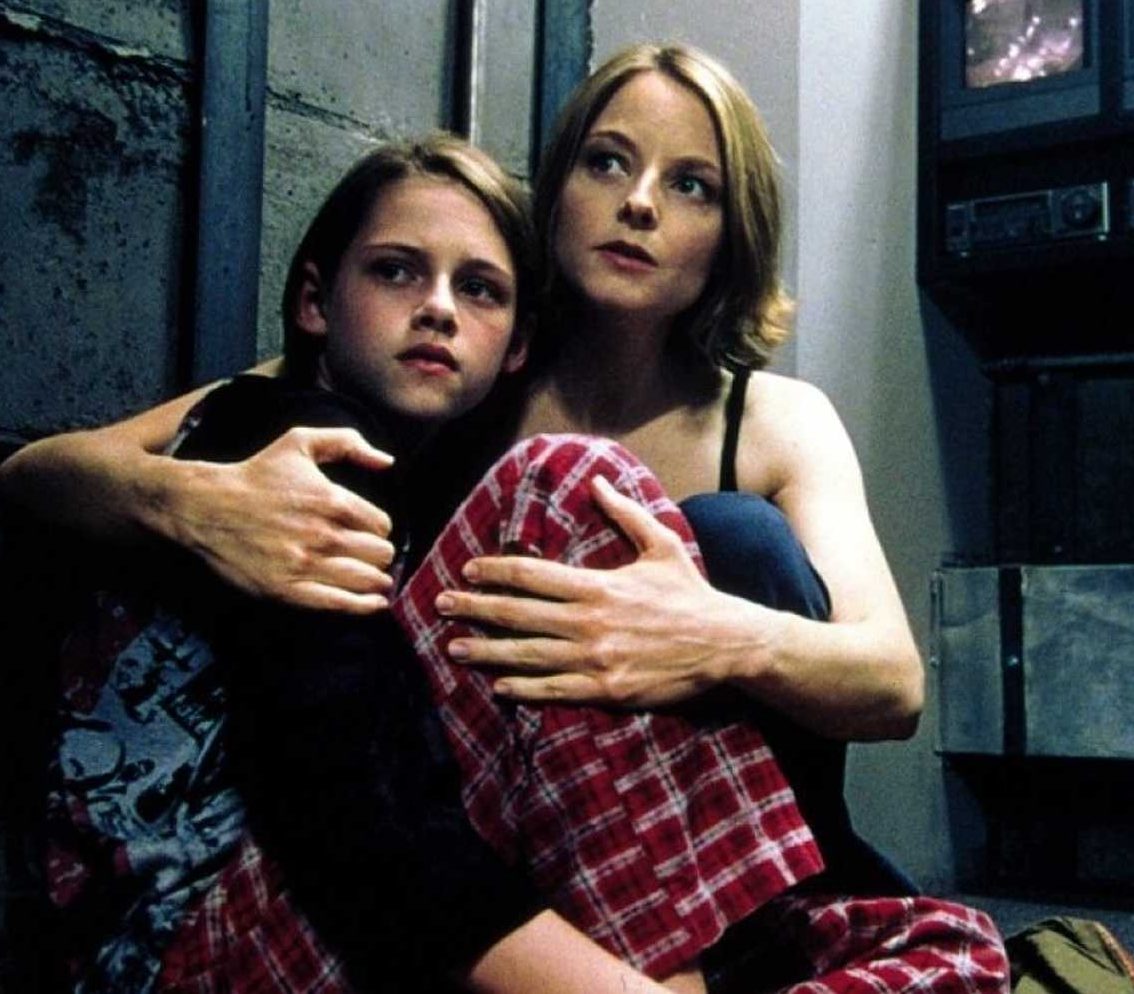 After filming on Moulin Rouge! was done, Kidman was set to go straight into shooting another movie: David Fincher’s thriller Panic Room. Unfortunately, Kidman’s double rib break on the set of Rouge forced her to drop out of what was due to be another physical role.

Kidman was replaced at the last minute by Jodie Foster, though she still has a role in the film: you can hear Kidman over the phone, as the voice of the girlfriend of the lead character’s husband. 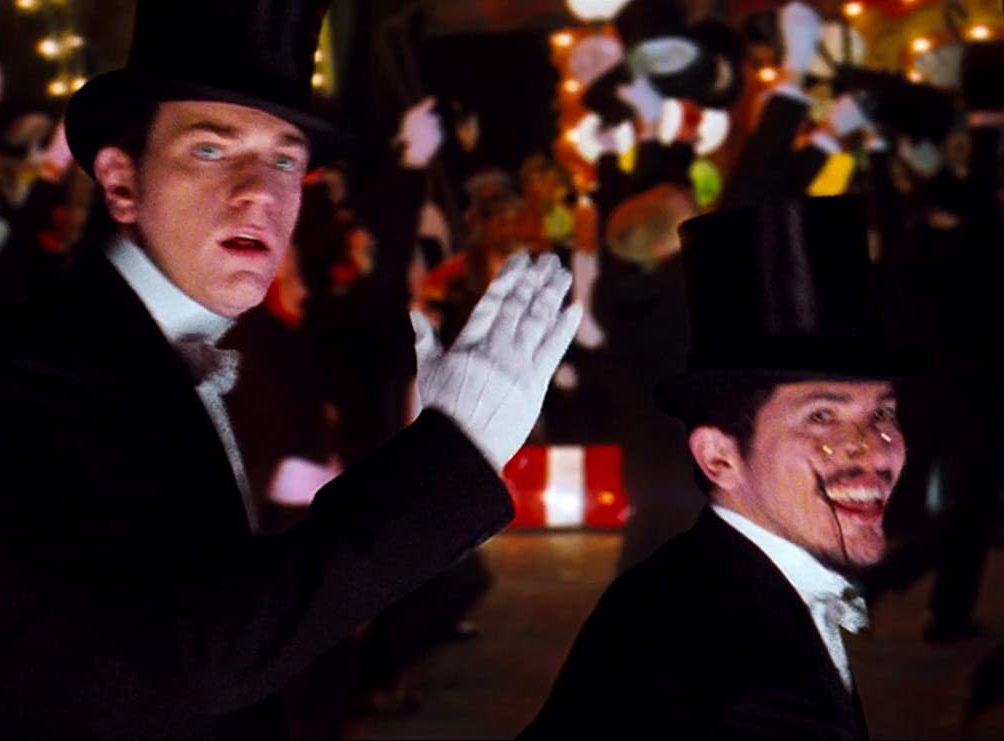 To play the 4 ft 6 in painter Toulouse-Lautrec, the 5 ft 6 in John Leguizamo needed some help. To convincingly portray Lautrec, Leguizamo walked on his knees and was fitted with special  leg braces, with his legs and feet removed in post-production. Predictably, filming this way for long periods of time took a toll on the actor physically.

There were long-lasting consequences; though the ‘numbness’ in Leguizamo’s legs eventually went away, the actor was still complaining of back trouble five years later.

7. The production was forced out of the studio early by Attack of the Clones 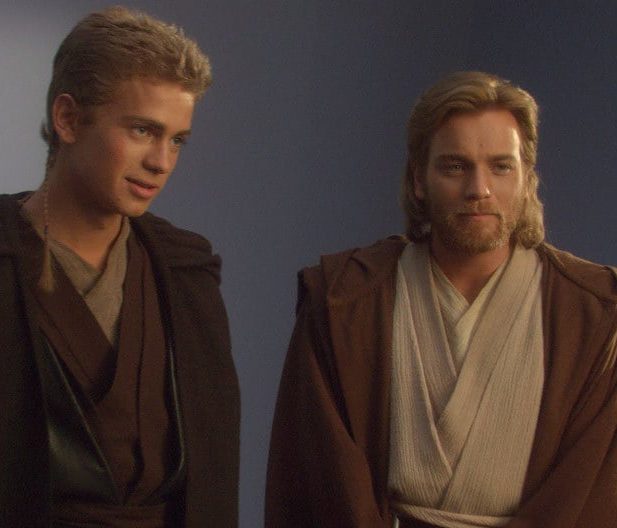 Filming on Moulin Rouge! went relatively well, all injuries aside. One thing that didn’t go to plan, though, was the shooting timetable. When production overran, Moulin Rouge! was eventually forced out of Fox’s studios in Sydney to make way for Star Wars Episode II: Attack of the Clones (which also stars Ewan McGregor).

With George Lucas’ second Star Wars prequel in town, Luhrmann and co were forced to pack up and finish filming elsewhere. Turfed out of Sydney, the movie shot its last frames in Madrid.

6. Leonardo DiCaprio and Heath Ledger were both considered to play Christian 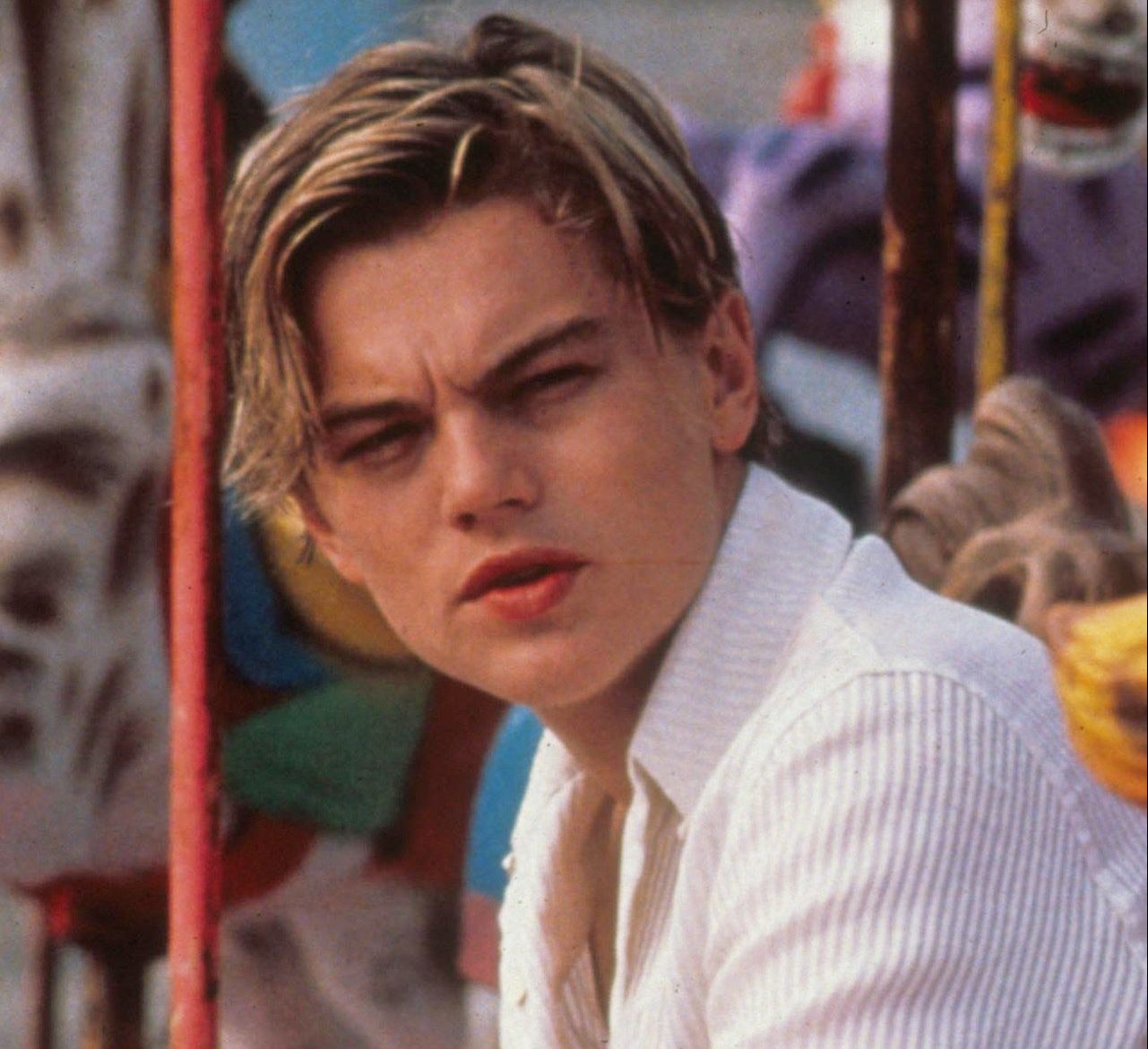 Moulin Rouge!’s Christian might be one of Ewan McGregor’s most famous roles, but he very nearly didn’t get the part at all. At first, Leonardo DiCaprio was considered, after he and Luhrmann had hit it off making 1996’s Romeo + Juliet, but the actor’s “pretty atrocious voice” (his words) took him out of the running early.

Luhrmann then looked to a handful of up and coming actors, including Heath Ledger and Jake Gyllenhaal, to play his film’s lead. In the end, the character was rewritten as a little older, making McGregor a perfect fit.

5. Ozzy Osbourne was supposed to play the Green Fairy (and you can still hear him in the film) 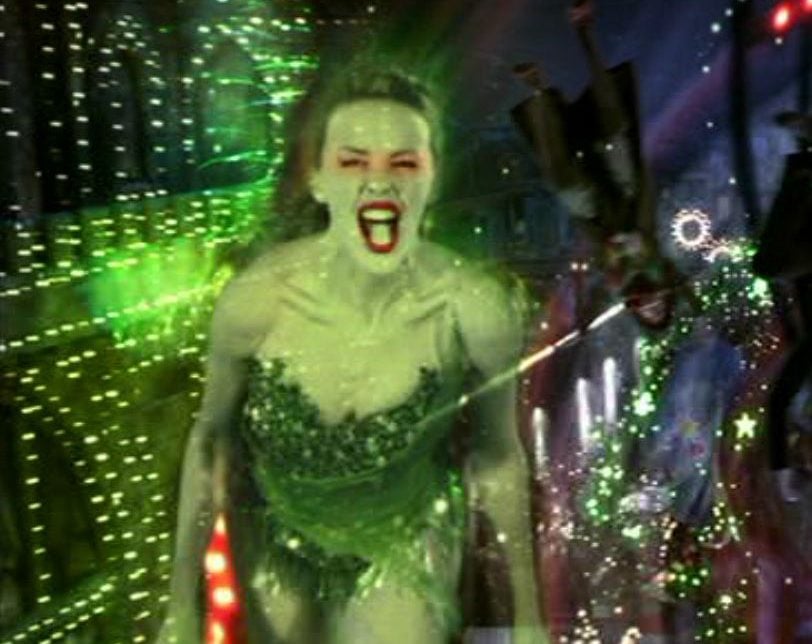 In the film, the Green Fairy – who appears to Christian after he drinks absinthe – is played by the inimitable Kylie Minogue. However, the Australian pop star and actress wasn’t the only actor who signed on to play the character.

Originally, Ozzy Osbourne was set to appear alongside Minogue as the fairy’s ‘demonic alter ego’ accompanied by a sitar. Osbourne recorded vocals for the sequence, but his role in the film was reduced to a scream, which can be heard when the Green Fairy’s eyes turn red.

4. It took Luhrmann two years to get permission to use all the music 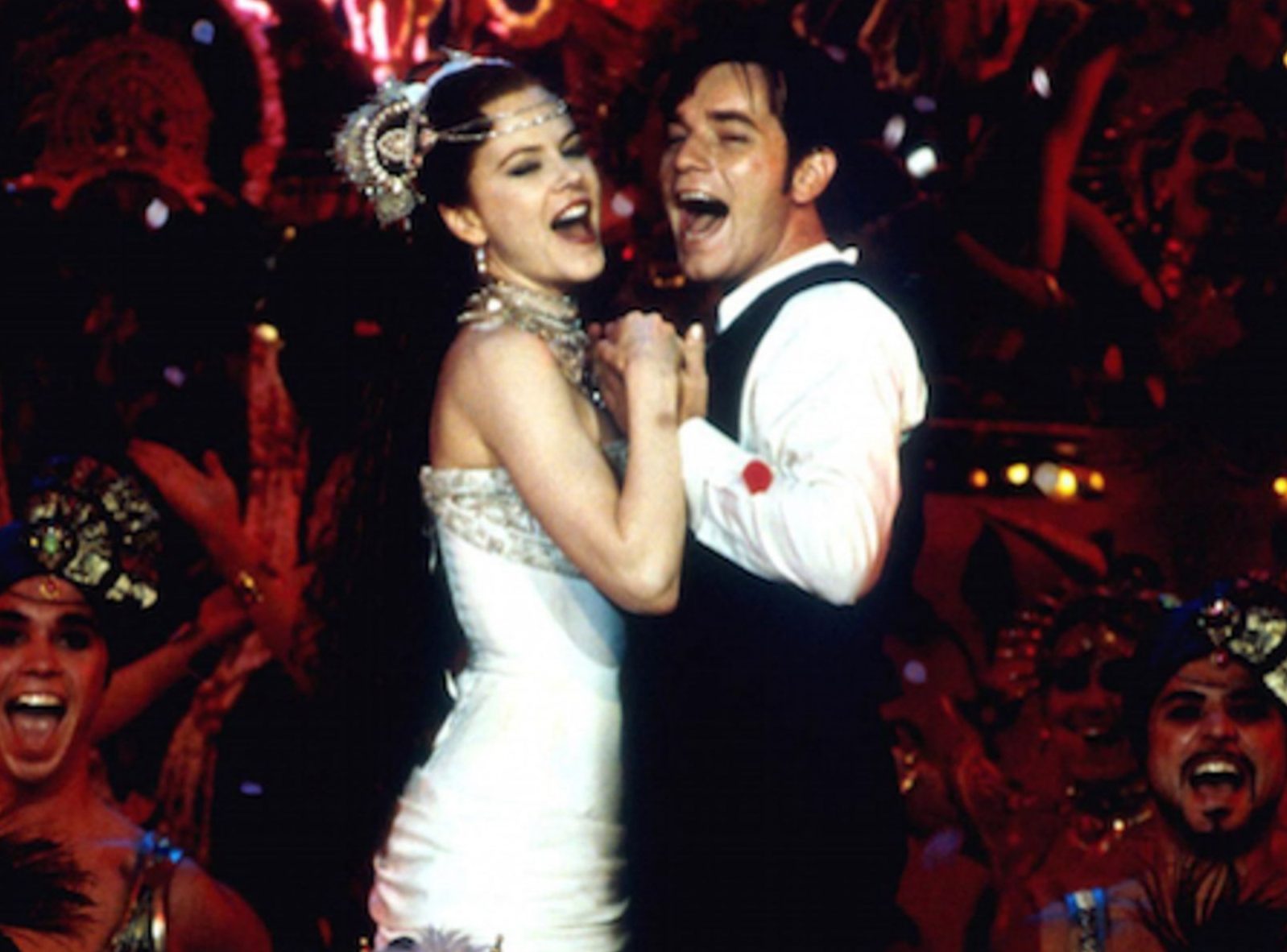 Though it involved on-set injury and a last-minute forced relocation, filming Moulin Rouge! was a doddle compared to obtaining the music rights. In total, it took Luhrmann two years to clear the rights to all the songs that appear in the film.

To help seal the deal, the director made personal visits to the likes of Paul McCartney and Elton John along the way. Only two artists refused to let their songs be used: The Rolling Stones and Yusuf Islam (formerly known as Cat Stevens).

3. Satine’s necklace is the most expensive piece of jewellery ever made for a film 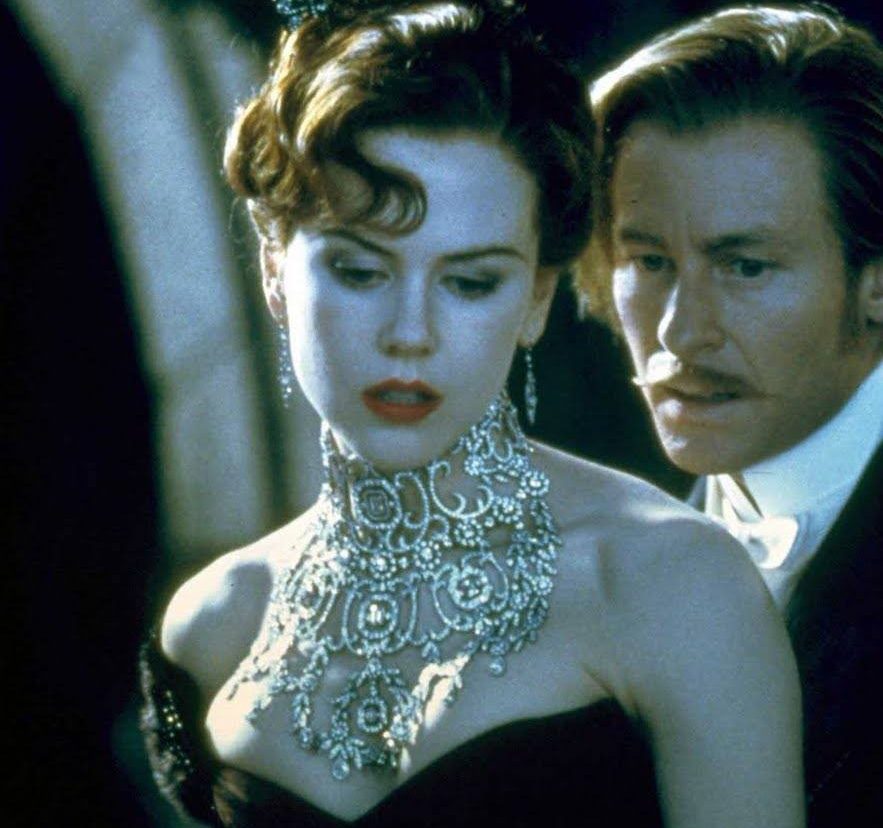 No expense was spared when it came to the costumes seen in Moulin Rouge!, with spending on jewellery reaching new heights. The Satine, a necklace produced specifically for the film by Stefano Canturi, was made of 1,308 diamonds and a 2.5-carat sapphire clasp and took four months to make.

The most expensive piece of jewellery ever made for a film, today the necklace is valued at around $3 million.

2. Catherine Zeta-Jones and Courtney Love both tried to win the part of Satine 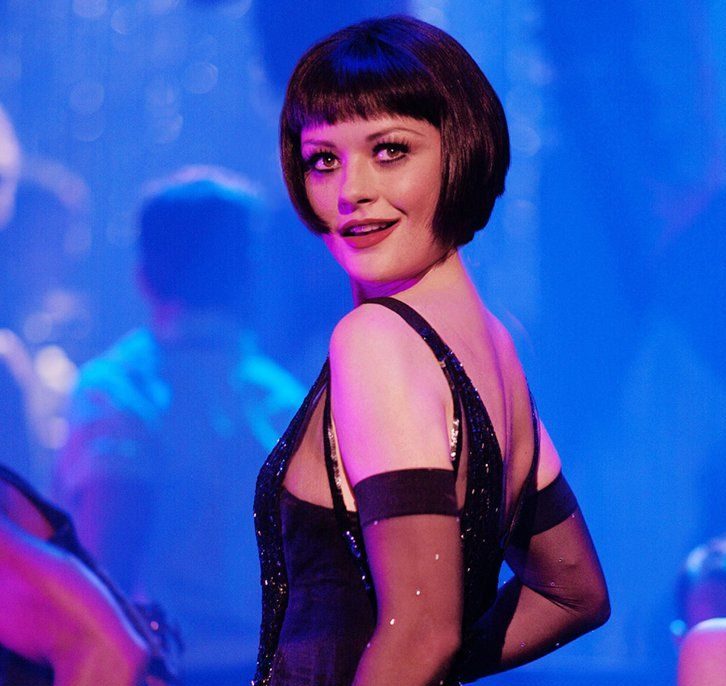 Before he cast Nicole Kidman, Baz Luhrmann tried a few different actresses out for Satine. Catherine Zeta-Jones, Renee Zellweger and Kate Winslet were among those who tested, but none impressed Luhrmann like Kidman.

Courtney Love also auditioned to play Satine, but while Luhrmann thought her “fascinating” and “beguiling”, in the end the only part Love played was in granting Moulin Rouge! the rights to her late husband Kurt Cobain’s song Smells Like Teen Spirit.

1. Baz Luhrmann’s father died on the first day of shooting

On the very first day of shooting on Moulin Rouge!, Baz Luhrmann’s father passed away. However, spurred on by his dad, Luhrmann didn’t let his father’s passing get in the way of his passion project, returning to work almost immediately.

According to the filmmaker, the elder Luhrmann told his son, “What are you doing here? You must go back and do the film. You must work.”