10 Things You Didn’t Know About The Walking Dead

Easily one of the best shows of the noughties, The Walking Dead has graced our screens since 2010 and has been a big hit ever since. Originally based on the comic book of the same name, it has grown into a franchise that many of us have come to love! Set in a post-apocalyptic world, it centres on survivors lead by Rick Grimes who are attempting to stay alive in a world full of zombies. If, like me, you’re a Walking Dead junkie, take a look at these ten things you never knew…

P.S. this whole article is SPOILER-CENTRAL. So if you’re not up to date, tread carefully!

10. I wanna hold your haaaam

Blood and guts are a constant sight in The Walking Dead, but unlike a lot of TV shows (Grey’s Anatomy, we’re looking at you), they use far better props than bovine organs. They actually use ham joints and occasionally the odd chicken breast. 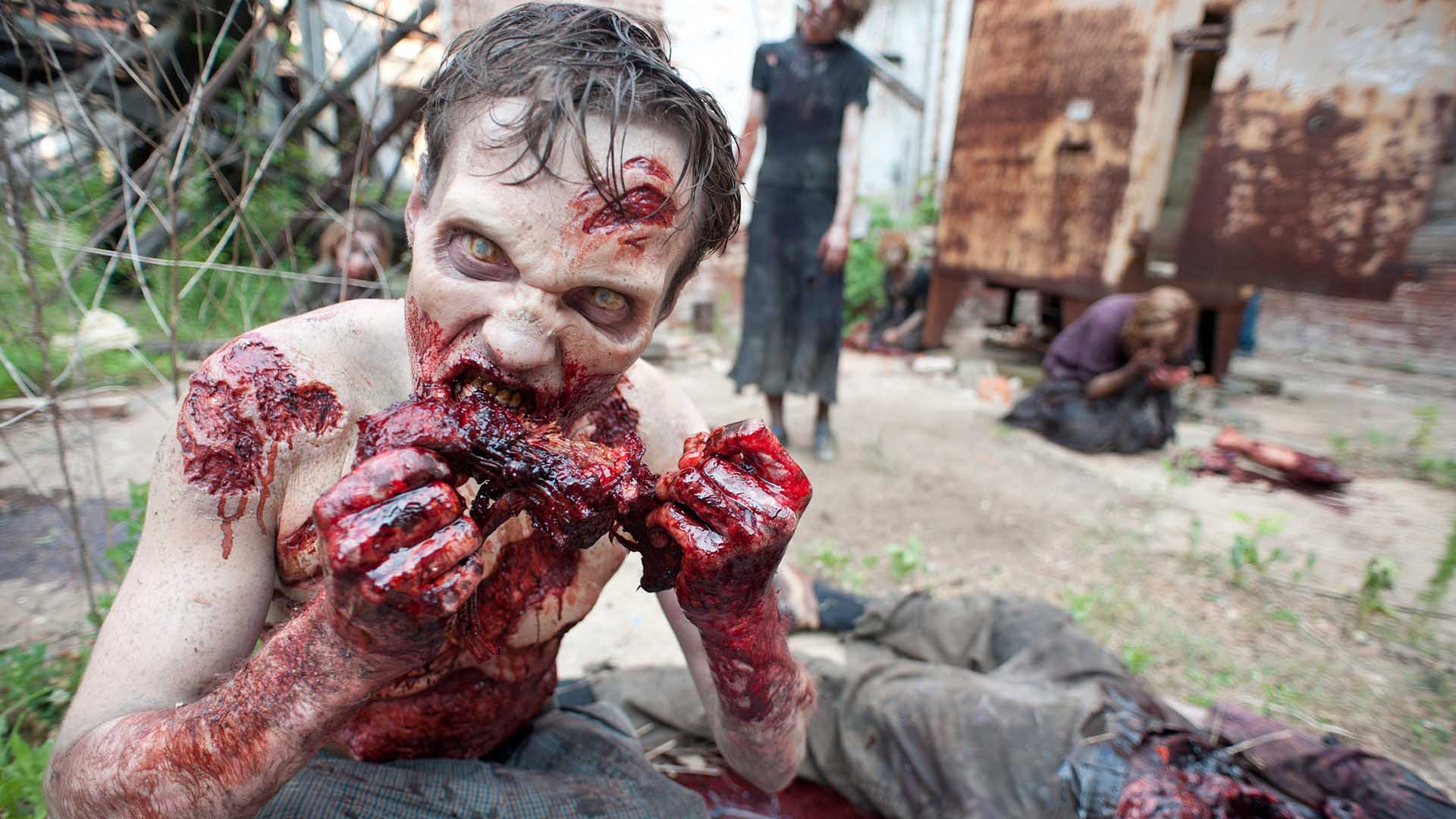 The ham used to be covered in BBQ sauce (yuuuum!), but the vinegar in the sauce was compromising the special effects makeup so they switched up the recipe.

9. The show is based on a comic-book

Comic-books always remind me of geeky guys who play Dungeons and Dragons by candlelight (sorry for the stereotype), but The Walking Dead is actually based on a modern comic-book, published since 2003.

For the most part, the show stays true to the comic – with a little poetic licence here and there. For example, Carol is far from the meek housewife displayed in the comics. Daryl and Beth are completely ‘made-for-TV’ characters, with no basis in the comic. And the biggie – in the comics, Rick suffered at the hands of The Governor and had his right hand chopped off! Luckily they didn’t project this onto the screen due to two things: 1) How could Rick fight like he does with one hand? and 2) It would cost way too much money to use the CGI needed.

Our beloved Dale (Jeffrey DeMunn), who was the moral compass for the original Atlanta group in Seasons 1 and 2, died after being severely attacked by a walker. HOWEVER, he was never supposed to die – in the comic books, he is actually one of the longest-serving characters. 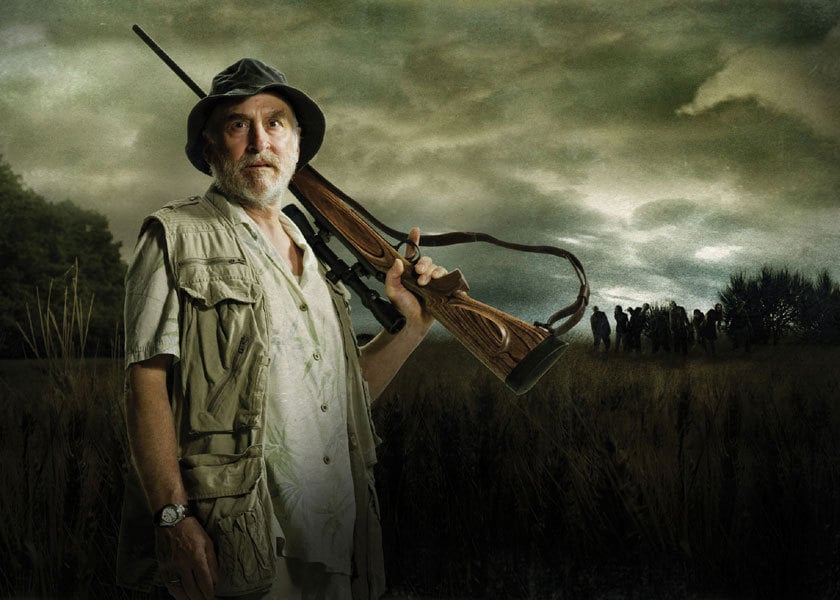 But controversially, Jeffrey DeMunn asked to leave as he was enraged that the show runner Frank Darabont, who was a lifelong friend of Jeffrey’s, was fired. In protest, he asked for the character to be written out. In an newspaper interview in March 2018 he said:

“Dale’s death was my decision, I was furious about how Frank was pushed out of the show. I spent a week not being able to take a full breath. And then I realized, ‘Oh, I can quit.’ So I called them and said, ‘It’s a zombie show. Kill me. I don’t want to do this anymore.’ It was an immense relief to me.” 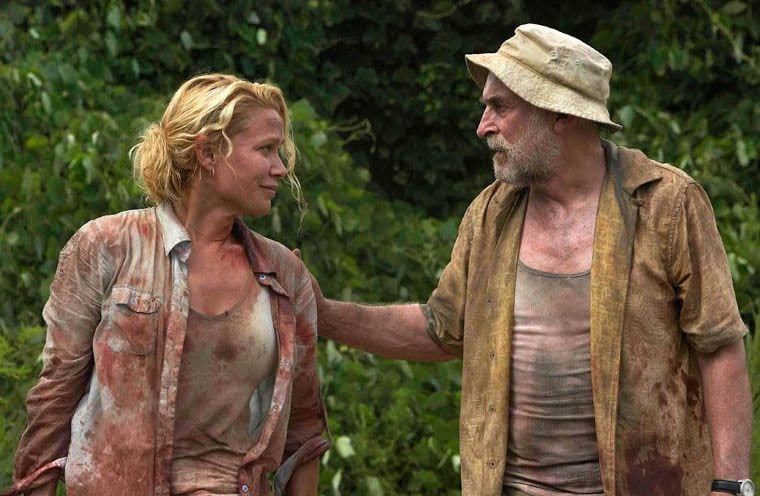 Now, hear me out on this one. Since both The Walking Dead and Breaking Bad are aired on AMC, it’s not all that surprising that there is the odd little easter egg (inside joke) shown. AMC have since confirmed that they are set in the same universe! There are loads of little inside jokes flittered throughout the seasons – have you ever noticed? 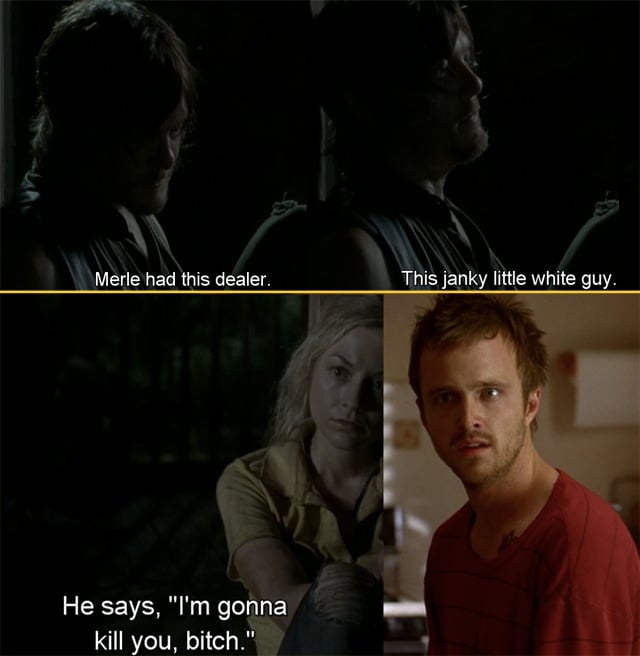 There’s Merle with the blue pills in Season 1, that just so happen to resemble Heisenberg’s meth. Then, they mention Merle’s ‘dealer’ who seems to also resemble Jesse Pinkman? And if that’s not enough for ya – Glenn’s snazzy red car in Season 2 of The Walking Dead is the very same car that Walt buys for Walt Jr. in Breaking Bad. ANDDDDD, Heisenberg also speaks to the manager when he’s returning said car, and wait for it, his name is GLENN.

Despite The Walking Dead being set (and filmed) in the Deep South, a few of the main cast are in fact from good ol’ Blighty! Andrew Lincoln (Rick), Tom Payne (Jesus), Lennie James (Morgan), Pollyanna McIntosh (Jadis) and David Morrisey (The Governor) all hail from our green and pleasant land! Kudos to those actors for the fab accents!

Lauren Cohan, who plays the role of Maggie is also sort-of English. She was born in New Jersey, but moved to England when she was thirteen, so she kinda counts! She definitely has a hybrid accent that’s for sure!

I AM SHOOKETH. Tom Payne (aka Jesus), is not only a Brit – he’s also none other than Brett Aspinall from Waterloo Road?!?! WHO KNEW! I’m sure you guys all remember Brett’s character as a snobby teen slightly too big for his boots. 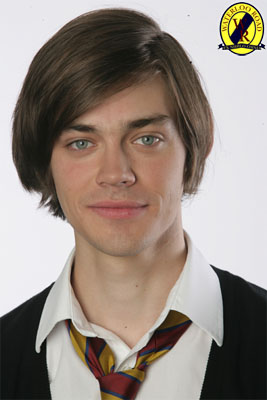 Brett was known for being a bit of a philanderer despite his young age – poles apart from the Jesus we know and love, who is the moral compass of the show in later seasons. After watching 117 episodes over the last few years, you would have thought more people would have noticed – the facial hair has thrown us off the scent!

Whilst we all know and love Daryl as a bit of a bad boy who needs to wash his hair a tad more, the modelling world is actually missing one of its own. Who knew? Norman Reedus worked as a model for fashion houses such as Prada, a far cry from his squirrel-eating character who thinks nothing of slicing into a zombie or two. 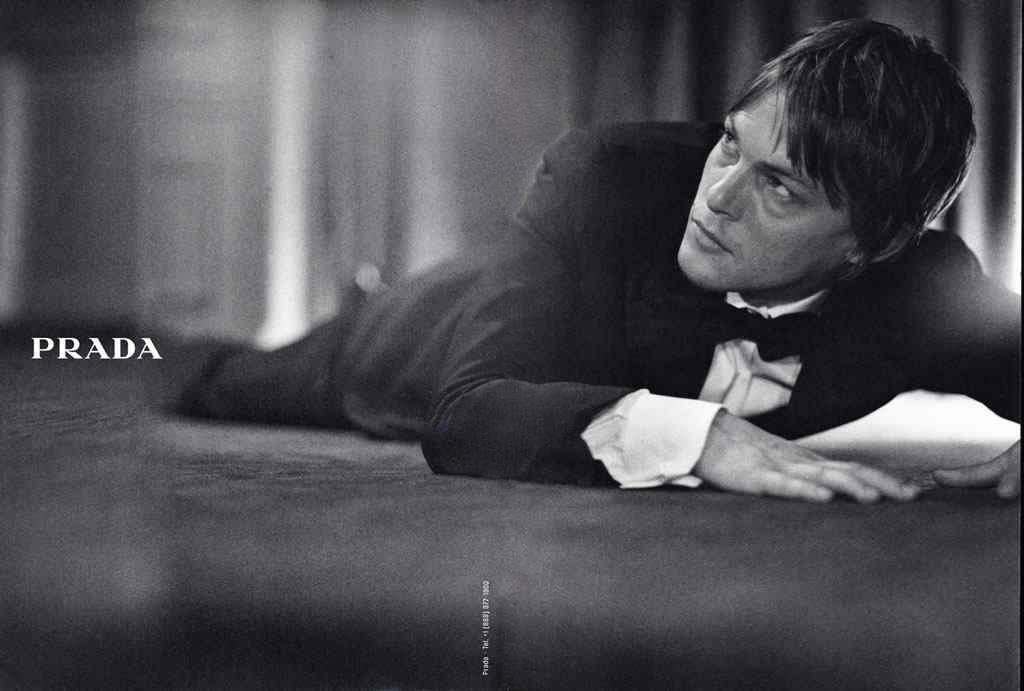 Who’d have thought it eh? His son has also followed in his footsteps, gracing catwalks at New York Fashion Week for Calvin Klein – seems there’s more than meets the eye for our Walking Dead veteran. And if that wasn’t enough – take a look at him campaigning for Cruelty-Free International. 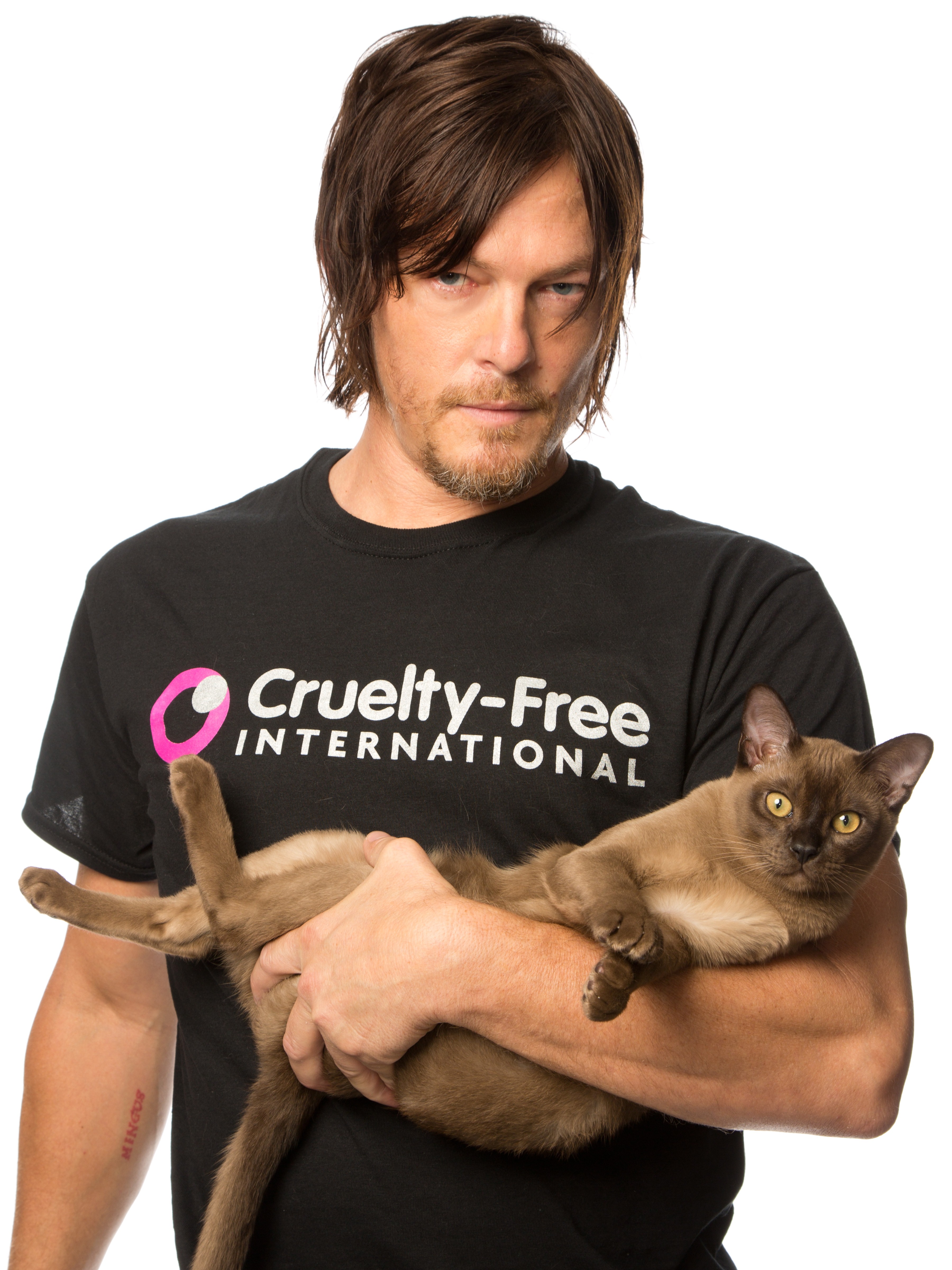 Only recently has AMC confirmed the timeline of The Walking Dead, with the incredible assertion that since the beginning (117 episodes, eight years) it has only been 632 days. That’s ninety weeks (or twenty months) – whaaaat?! But SO much has happened. 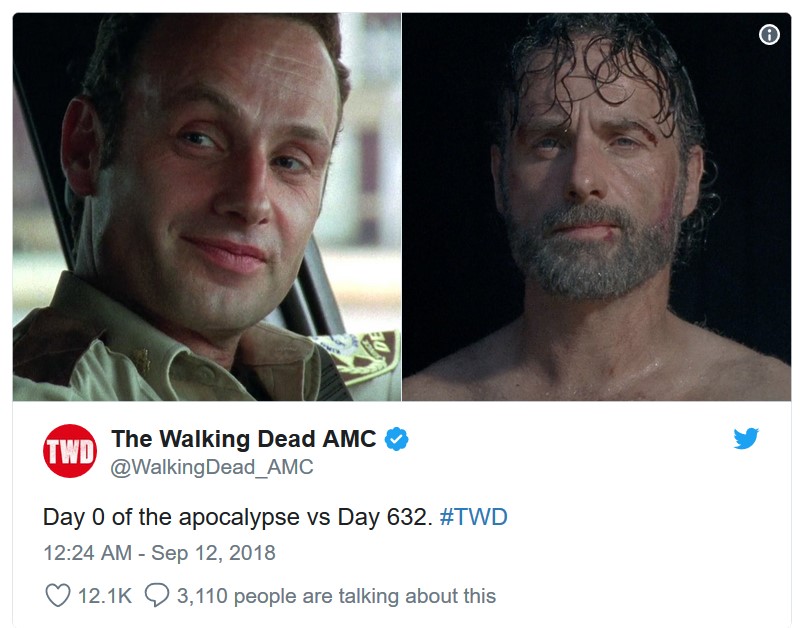 Aside from the kids growing up – Carl is DEFINITELY not 13! – it sort of works. It essentially means that the beginning of the apocalypse to finding the prison only spanned 300 days! Which also means – rather controversially I think – that from Glenn being killed until today it has only been 34 days. THIRTY FOUR!! Which also explains why we never really saw Maggie ‘pregnant’. She’s since had the baby, as there has been a jump of 18 months between Seasons 8 and 9. Who knew?

It’s not all grav-ay playin’ a zomb-ay you know guys. It’s hard work and there are a lot of rules. Playing a Walker looks straightforward doesn’t it? But, ya can’t even blink! The extras are instructed to not blink – try it, how long can you manage? I did a solid 21 seconds – I know, you’re impressed. It’s also not a case of simply walking funny and slapping on some makeup – this is serious. The wannabe walkers have to attend Zombie School.

Looks fun doesn’t it! Maybe I should audition…

The walkers spend anywhere from four hours (snoozefest!) to just 15 minutes in makeup, and then are basically told to ‘walk like you’re drunk’ – I wonder how much they get paid…

But, HOW?!, you shout! Well, we’re not actually sure yet… but despite his death in Season 2, it seems like The Walking Dead bosses are enjoying teasing fans about his imminent return. Jon Bernthal (Shane) was spotted in Georgia, Atlanta over the summer with his cast mates, sparking a social media wave of excitement. Apparently the bosses at The Walking Dead were disappointed that the surprise had been ruined but they have said that ‘some very cool, very heavy stuff’ is going to happen. 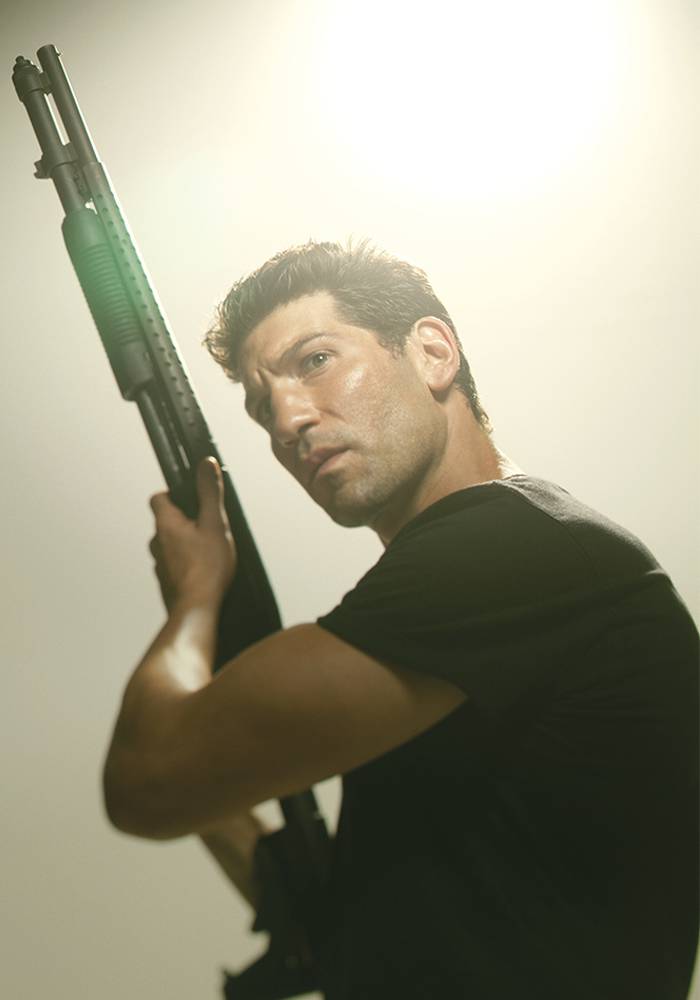 We KNOW Shane is dead, so his appearance in all likelihood signifies a flashback for Rick – or maybe an hallucination before his likely demise from the show? It’s been heavily rumoured for a while now that Andrew Lincoln will be departing the show this season, with even Lincoln himself stating:

“This will be my last season playing the part of Rick Grimes. Now hear me out, please. I love this show. It means everything to me. I love the people that make this show. I promise not to cry, I’ve done enough crying onscreen.”

How will we cope, guys?! Is it really The Walking Dead without Rick?

I think it’s safe to say that whatever happens next, it’s gonna be binge-worthy! Season 9 is airing now on FOX TV in the UK – get watching!