A bit like Dyno-Rod, The A-Team were the people you called when you were experiencing a few problems which required going that extra mile to resolve. Unless that extra mile required a flight, in which case Mr T would have to sit that one out (although in the event he was regularly sedated). It was back in 1972 they first made the headlines of course, when this crack commando unit was sent to prison by a military court for a crime they didn’t commit. 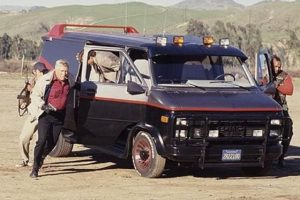 You must have some recollection of these men who promptly escaped from (abovementioned) maximum security stockade to the Los Angeles underground, no?? Who today, still wanted by the government, survive as soldiers of fortune? Ring any bells? Well put it this way, if you have a problem, if no one else can help, and if you can find them, maybe you can hire the A-Team. 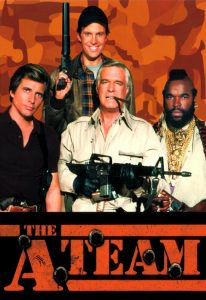 Aha! Yes, Lieutenant Colonel John ‘Hannibal’ Smith, Lieutenant Templeton Arthur ‘Faceman’ Peck, Sergeant Bosco Albert ‘Bad Attitude’ Baracus and Captain H.M. ‘Howlin’ Mad’ Murdock. The go-to men in the black and red-striped GMC van which they routinely leapt out from and/or jumped into second before/after completing a spot of vigilant work as part of a client commission. Week in, week out during my 80s childhood this quartet would embark on another daring raid, culminating in the sporadic assembly of impromptu weapons fashioned from whatever household items were left lying around/they could get their hands on. Think ‘Ready, Steady, Cook, but without food at the end of it. 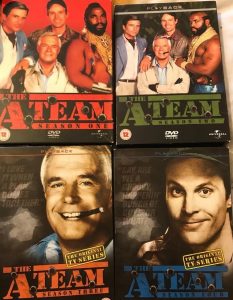 Thing is, you think you know everything about the A-Team? Then think again; as here’s the things you thought you knew but turns out you didn’t;

10. No Baddies Ever Met an Untimely Demise on the Show

Yup. Despite all the explosions, gunfire and general melee at the climax of pretty much every show, the body count remained suspiciously low throughout the entire 5 seasons of The A-Team. Suspiciously low equals the sum total of one at last count. And even that was contentious, as the death of General Fulbright in ‘The Sound of Thunder’ was merely implied, but never substantiated. 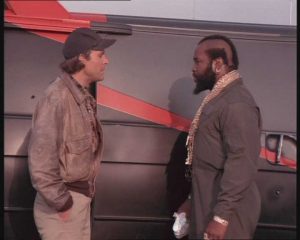 And never mind the lack of grizzly deaths, even those caught up in a bit of gratuitous screen violence seemed to walk away unscathed, irrespective of whether they’d been subjected to a crashing vehicle or thrown from a window.

9. Putting Words into His Mouth

Let’s just get one thing straight before we go any further, right. Bad Ass Baracus NEVER once uttered the line, “I pity the fool’ while starring in the A-Team. Yet the catchphrase stuck with him wherever he went. 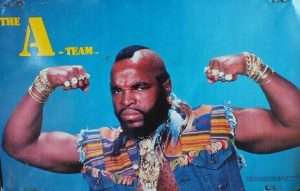 It’s not that the actor who played Baracus, Mr T didn’t make the line his own. It’s just that he coined it when he portrayed ‘Clubber Lang’ in ‘Rocky III’. So there you go. Another popular myth, debunked. The turn of phrase you’re probably looking for which B. A trotted out a lot during the A-Team was of course; “suckers.” Apt, for those who have long-held the belief “I pity the fool” belonged in the A-Team glossary.

Certainly something which wouldn’t have happened these days, and rightly so, the A-Team set tended to a very masculine environment to be on and around if you were a woman. But more than that, it sounds like it bordered on sexist, by all accounts. Just ask either of the two actresses who were enlisted to play the A-Team’s short-lived female sidekicks. 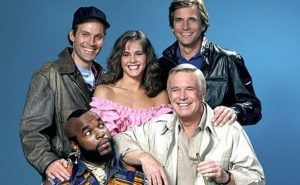 One, Marla Heasley who portrayed Tawnia described how one time the late George Peppard took her to one side during filming and pointedly remarked that ‘nobody wanted her there.’ A general consensus amongst the male leads which was underlined years after the show finished, when Dirk Benedict told one interviewer; “It was a guy’s show. It was male-driven. It was written by guys. It was directed by guys. It was acted by guys. It’s about what guys do. We talked the way guys talked. We were the boss. We were the God. We smoked when we wanted. We shot guns when we wanted. We kissed the girls and made them cry … when we wanted. It was the last truly masculine show.” Hmmm. Sometimes the 1980s has a lot to answer for…..

So, from the sublime (ly sexist) to the (frankly) ridiculous next, as we discover that there exists a shocking amount of A-Team fanfiction out there. For those who don’t know what fanfiction is, it’s what happens when ‘imaginative’ fans of particular TV shows, movies, pop bands, etc delve into their darker sides; and run riot, illustratively-speaking. Or from a creative writing perspective. 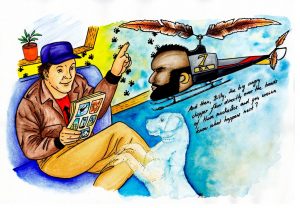 You might recall the huge amount of One Direction fanfiction a few years ago now, which often would depict Harry Styles and Louis Tomlinson in artistically compromising positions. Yeah, well believe it or not, there’s a whole heap of equally salacious ‘fiction’ inspired by the ‘imagined’ relationships between A-Team members. So, if you’re one of those people who three decades after the fifth series finally aired still wonder which of the original A-Team line-up might end up in a passionate clinch, fill your boots online.

6. Remember That Crime They Supposedly DIDN’T Commit? Yeah, Well Turns Out it Was Alleged Murder!

Sent on a covert mission to steal gold bullion from the Bank of Hanoi, the objective being to bring about a quicker end to the Vietnam War by thwarting monetary supply line to the Viet Cong, the A-Team accomplished this. Only to be implicated as murderers in the immediate aftermath of the discovery of their commanding officer’s body shortly afterwards; who had clearly succumbed to a double-crosser somewhere down the line. 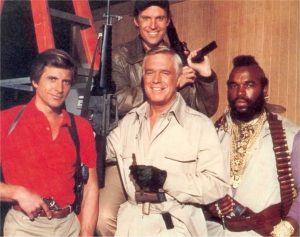 Not able to prove their innocence/clear their names (Colonel Morrison’s orders had been destroyed in the subsequent raising to the ground of his office in an artillery raid), the Alpha Team were sent to a maximum security stockade for their ‘crimes’. Crimes which together with murder included, bank-robbing, treason and desertion.

5. Nobody Knew Murdoch’s Christian Name(s). Apart From Him, Obvs…. 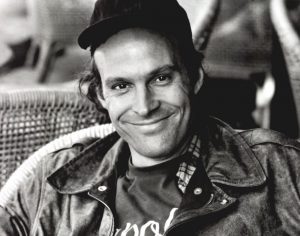 Yet we (the loyal viewers) were never told just WHAT the H and M stood for. Clue; it’s definitely NOT a Swedish-founded casual clothing retailer.

Probably one of the biggest shocks centering on the A-Team, was the revelation that George Peppard DIDN’T actually smoke cigars at all; despite seen to be chomping on a celebratory one whenever a plan came together. Which, incidentally, he ‘loved’ when it happened. Usually towards episode finales, and typically after some explosions and shiz had occurred. 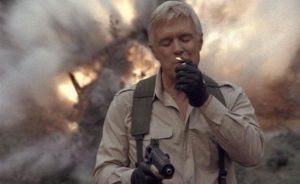 No. Peppard was more a cigarette man. With a three packs a day habit. Despite quitting in 1992 (in the wake of having a tumour successfully removed from his lung), in the end it was too little too late. Peppard sadly passed two years later at the age of just 65, having contracted pneumonia while continuing his post-lung cancer treatment.

3. The Face Might Not Have Been The Face. Not As We Know Him, Anyway

According to the scriptures (or rather, TV trivia), Dirk Benedict wasn’t the first choice actor to play Face. Shock, horror, puzzled facial expressions…. 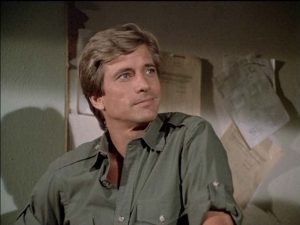 A chap going by the name of Tim Dunigan originally got the nod from the casting director and was even used on the pilot show. However when reviewing the footage they decided that he looked way too young to have seen action in Vietnam. Which was the premise of the entire show, let’s not forget. Hence the re-casting of Benedict.

2. Music to Our Ears

Is there a more instantly recognisable TV theme tune associated with the 1980s than the A-Team? I think not. OK, maybe the intro to BBC1’s Sunday evening yachting drama, ‘Howard’s Way’, but let’s not go there right now.

And the person we have to thank for creating this memorable score was a dude called, Mike Post. Who you might remember from such equally nostalgic TV theme tunes as ‘The Rockford Files, Magnum PI, Hill Street Blues, LA Law’ and ‘Quantum Leap’; all of which he supplied the signature music for.

1. Have You Never Noticed the Battlestar Galactica Reference in the A-Team’s Opening Credits?!

Seriously?? Are you for real??!! OK. Then I better let you in on the long-running ‘in joke’ then I guess. A long time ago, in a galaxy far, far away (but not Star Wars far), Dirk Benedict was the lead character in a sci-fi series called ‘Battlestar Galactica’. Where he starred opposite a child-like talking robot. 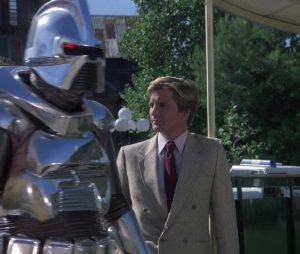 And to honour this, during the A-Team intro one of the baddies from the series – a Cylon – causally strolls past ‘The Face’ as he leans against a lamp-post. Cue’ Faceman’ looking more than a little bemused by the situ. Said credits scene is lifted from an episode that partially takes place on a Universal Studios lot, so the back story goes.