With a name which sounds more like a builder from Romford and the look of a taxi driver from Hull, Phil Collins doesn’t automatically shout celebrity/glamour/rock star. But he is. Well, more a case of was, past tense these days.

He was literally everywhere in the 1980s, be it romanticising about great train robberies or not wanting to rush love; yet conversely letting on that he regularly enjoyed a groovy kind of love. Seriously, you just couldn’t shake the man. 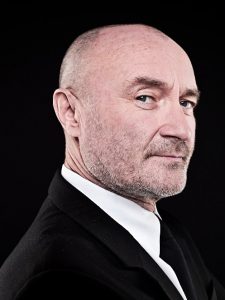 Nor could fictional character, Patrick Bateman, who in the somewhat dark movie, ‘American Psycho’ would throw himself wholeheartedly into both mergers and acquisitions whilst Genesis was playing in the background. Genesis being Phil’s previous musical incarnation before he decided to cut the apron strings and go it alone in the ‘80s if you recall. 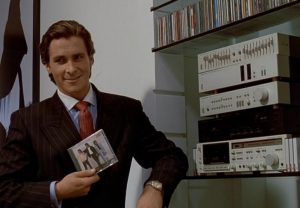 But these are just a handful of the things we DO know about Collins. More importantly we need to familiarise ourselves with those facts which often went beneath the radar….

When you remind yourself what Phil Collins achieved at the height of his 1980s popularity, then you begin to appreciate the music legacy he leaves behind. Not that he’s gone anywhere, just to clarify. Apart from early retirement to count his coffers. 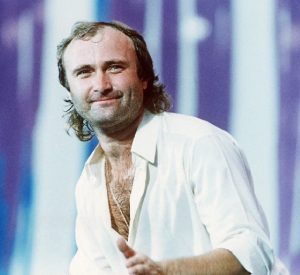 For the record, we’re talking about three UK Top 40 chart-toppers and seven US Billboard Chart number 1s during the ‘80s, and shifting a momentous 150 million records globally according to industry estimates. Amongst those massive hits were tunes you can’t help but tap your foot along to, like an awkward older male relative at a family gathering. ‘In the Air Tonight, Against All Odds, One More Night, Sussudio, Two Hearts’ and ‘Another Day in Paradise’ all finger-clickingly memorable.

Not in terms of deed poll recognition, I might add, but more in acknowledgement of his recording industry clout. Did you know for instance that Collins enjoyed more Top 40 hits on the American Billboard Hot 100 during the decade than any other artist? 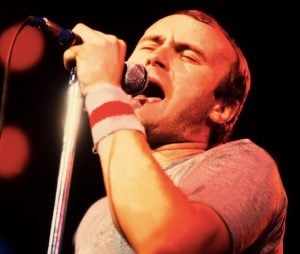 Simply put, Phil was omnipresent on the airwaves throughout the 1980s and was regarded as the go-to man for upbeat love songs and/or soul-crushingly depressing ballads. And pretty much everything else in between, including euphoric songs about great train robberies.

8. His Track Record Commanded Respect, Yet He Rarely Received It Away From His Loyal Fanbase

Despite his catalogue of achievements, Phil Collins remained largely ‘uncool’ in the eyes of the musos and his peers when he was at the top of his pops game. Never someone you would class as fashionable by any stretch of the imagination, Phil instead let his music do the talking and left traffic-stopping hairstyles and flirtations with cosmetics to the likes of Boy George, Phil Oakley and Duran Duran’s Simon le Bon. 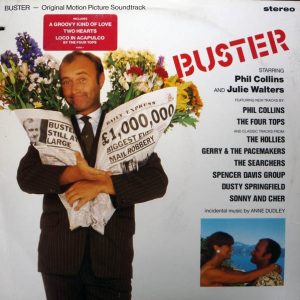 Not only was Collins cruelly dismissed by the music press, but he would often garner criticism for his commitment to substance as opposed to style. Although some didn’t exactly warm to his whimsical lyrics and altogether jaunty, sing-a-long choruses. The heathens.

7. You Can’t Hurry Love, But After the Third Time It Does Leave You With Limited Funds

Thrice-married Phil Collins certainly knows a thing or three about getting hitched, that’s for sure. Unfortunately after two practices his perfect third time of asking eventually turned a bit sour too. To the tune of some £25 million, so the press reported when he divorced Orianne Cevey in 2008. 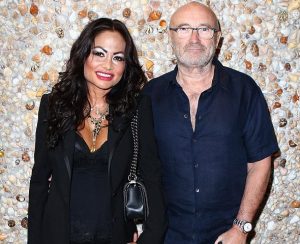 His well-publicised separation from the Swiss national (with Mexican ancestry) to whom he’d been married for 9 years, became the largest settlement in a British celebrity divorce at the time. Yet that’s all water – and considerable luca – under the bridge it seems, because as of January 2016, Collins said he had reunited with Cevey and were back shacked up together in Miami.

6. Unlike Many of His Music Business Contemporaries, Collins Attended Stage School

Phil was 14-years of age when his professional acting training began in earnest, when he won a place at the fee-paying Barbara Speake Stage School in Acton, London. A talent agency which had been founded by someone very familiar to a young Collins, namely his mother. One word, three syllables; sounds like epotism. 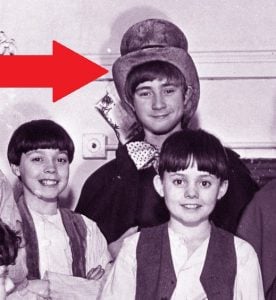 Despite the beginnings of an acting career (which panned out fairly encouragingly as you’re about to discover below), Collins continued to gravitate towards music where he finally found a home for his creative gift.

5. Yes. Collins Was an Actor a Long Time Before He Physically Morphed Into Bob Hoskins

Not a lot of people know this, but Phil started out as a child actor, gaining his first break in a London stage production of ‘Oliver!’ where he played the part of the Artful Dodger. From there Collins had to decide between acting and his love of music, but it didn’t mean the end of his acting aspiration when he chose the latter. Combining his two loves (of sorts), Phil played an extra in the Beatles’ film ‘A Hard Day’s Night’ in 1964, and he later had a role in ‘Calamity the Cow’. 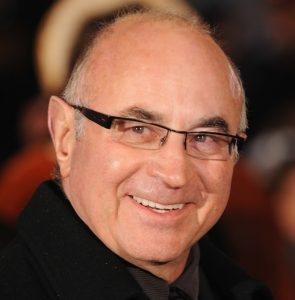 In addition to this he also appeared in ‘Chitty Chitty Bang Bang’ (portraying a child who storms the castle). Tragically this particular scene ended up on the cuttings room floor, but that setback didn’t discourage him from auditioning for the role of Romeo in 1968’s, ‘Romeo and Juliet’. Although Leonard Whiting bagged the role ahead of Phil in the end. And of course, in 1988 Collins took the titular role in the movie, ‘Buster’ (a film which glamourised the Great Train Robbery, didn’t you know), while also having a cameo appearance in Spielberg’s film version of ‘Hook’.

Technically the Oscar was awarded for the soundtrack he created in 1999 for the Disney movie, ‘Tarzan’, where the film’s lead track – ‘You’ll Be in My Heart’ – spent a total of 19 consecutive weeks at No. 1 on the Billboard Adult Contemporary chart. To date, a record. 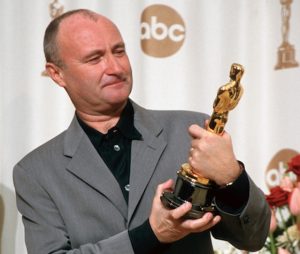 The multi-talented Collins also performed renditions of the track in German, Italian, Spanish and French, and also during that year’s awards seasons bagged a Golden Globe in recognition of ‘Best Original Song.’

Well, legend is an odd choice of words to use here, but given that it kind of rhymed with ‘Live Aid’, I decided to run with it. Plus, if Bono and Geldof can be talked about as Live Aid legends, then so can Phil in my book. 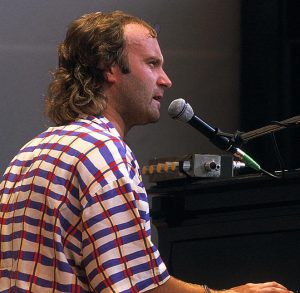 Basically Collins earned his charitable spurs because not only did he give his time freely to such a great cause at the Wembley concert here in the UK, but he also hot-footed it to Philadelphia’s JFK Stadium in the US. Which makes him the only act to have performed at both gigs.

I know every pop star/minor celebrity introduce themselves as authors these days (you just have to look at some TV reality show stars’ social media profiles, laughingly), but Phil Collins has actually penned his published offering; which shows that he has a depth of knowledge about something other than public appearances at a local nightclub. Plus Phil’s isn’t a picture book, although it does contain images. 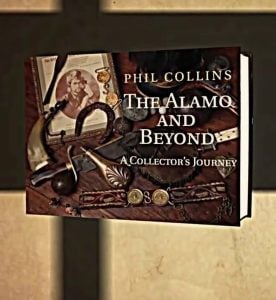 Perhaps most surprising of all, is that Collins’ book isn’t called the Book of Genesis. Chiefly because it’s got absolutely nothing to do with his former band or religious scriptures. ‘The Alamo and Beyond: A Collector’s Journey’ has much more to do with the Battle of the Alamo in Texas; which it turns out he’s something of an authority on.

1. He’s Part of a Pop Supergroup, Yet Has Never Performed on Stage With the Other Members in This Guise

And that’s due to Collins and the other two members not having formed this elite group as such, merely belonging to a non-physical triumvirate of pop stars who have flogged more than 100 million albums worldwide as solo musicians. So straight away you’re discounting The Sugababes, aren’t you? 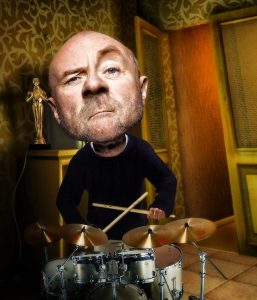 And you’d be wise to, as the other remaining members (well, one remains very much alive and kicking, t’other, not so) are music icons Paul McCartney and the late, great Michael Jackson, respectively.