You probably had the Nike Bruins (But NEVER the self-lacing, unapologetically futuristic Nike hi-tops from Back to the Future II’). It may be that you even owned the red body-warmer sported by Marty McFly. But there’s no way on this earth that at the tender of age of 10-years old you had the wherewithal to have a DeLorean DMC-12 sat on your parent’s driveway. Not unless Daddy was a millionaire and/or you were John DeLorean’s offspring that is. 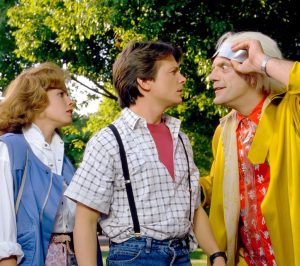 Aside from the aforementioned Nikes, body-warmers and dimension-straddling pseudo-sports cars (which in reality were anything but sporty, to the point they couldn’t even accelerate quickly enough to get you a speeding ticket for your efforts), one actor made his name on all three movie sets.

That said, fans of hugely watchable American sitcom, ‘Family Ties (where the titular topic of this blog played the role of Alex P Keaton from 1982) might not necessarily agree with that last sentence. 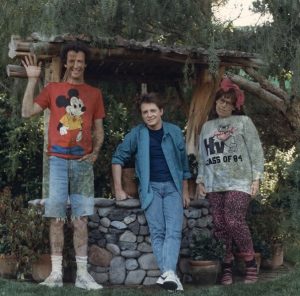 And he of course was Marty McFly himself, portrayed by the most excellent Michael J Fox. And let’s not forget, when Fox wasn’t playing a time-travelling would-be rocker and inventor of the skateboard, he was busy being a hairy-faced ‘Teenwolf’. 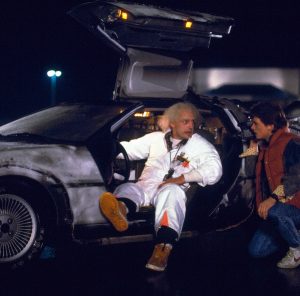 Fast forward a few years from the last of the ‘Back to the Future’ trilogies (roughly to the late 1990’s), and it may be that you remember one-time adolescent star, Fox more from the likes of ‘Stuart Little’ and ‘Mars Attacks’. Or if you were more a fan of rom-coms, then it’s highly likely you’d put his instantly recognizable face to films such as ’Life with Mikey, Homeward Bound I & II, Bright Lights, Big City’ and ‘For Love or Money’.

But that’s by the by, as what you really want to know is 10 things you didn’t know about Michael J Fox before now, so here we go….

10. He Founded His Own Charitable Organisation

He is the founder of the Michael J Fox Foundation, which dedicates its work to helping to find a cure for the still incurable Parkinson’s disease, which he himself was first diagnosed with suffering from in 1991. 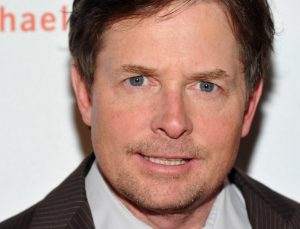 Since receiving that life-changing diagnosis at the age of just 29, Fox has become a vocal advocate, calling for more research to be done into the chronic illness, yet at the same time remaining positive and upbeat about his personal experiences living with Parkinson’s. Summed up perfectly when once asked by an interviewer whether he felt ‘cheated’ by his condition, Fox retorted; “No, absolutely not. It’s been a detour that I wouldn’t have planned, but it’s really led me to amazing places.”

9. Don’t Call Me Andrew. Or Al for That Matter…

Although we’re sure Michael is far too nice to ever say that. However according to his own birth certificate, the actor was christened Michael Andrew Fox.

Which was absolutely fine until he decided he wanted to tread the boards (or at least, become a TV and movie actor) and discovered that there was already a Michael A Fox in the (show) business. 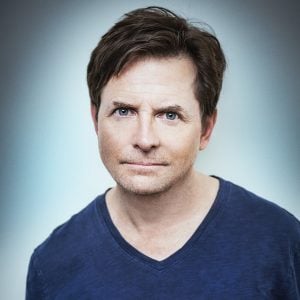 So thinking on his feet, a young Michael A opted instead to refer to himself as Michael J, henceforth. Partly to avoid any potential confusion with the Screen Actors’ Guild, and partly because existing actor, Michael J Pollard was a hero of his.

8. Don’t Call Us, We’ll Call You. At Your Local Phone Booth

In one of the best Hollywood stories we’ve ever heard, various reports speak of Fox negotiating his big break in the ‘Family Ties’ TV show, from a phone booth outside a fast food joint in downtown LA. 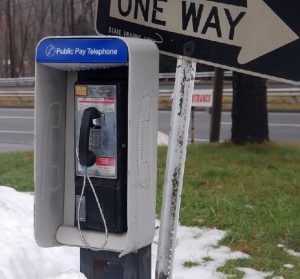 Due to not having a home phone at that very early point in his career (and we’re talking about in a land before mobile phones), he gave the casting people the number for a phone booth located outside a – now defunct – branch of Pioneer Chicken.

To ensure that he didn’t have to loiter with intent outside a phone booth for a day, Michael cleverly told his would-be employers that he was only home between the hours of 4 and 5pm. And sure enough, the call which arguably changed the course of his life, duly came.

7. Fox Was (Back to the) Future-proof

Despite getting the nod as joint creators, Robert Zemeckis and Bob Gale’s first choice actor to bring the role of Marty McFly to the big screen, they had to wait a little while before they eventually got their man. And that’s because Michael was caught up with filming ‘Family Ties’ back in the early 80s, and simply didn’t have the time. 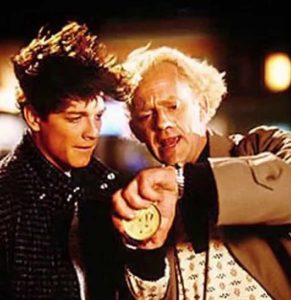 So in the interim – and as a contingency plan to compensate for Fox’s scheduling conflicts – the writer(s)/director of the ‘Back to the Future’ trilogy plumped for Fox doppleganger, Eric Stoltz. The problem was Stoltz turned out to be too intense for the character. So just 6 weeks in, filming was canned and as soon as Fox was available they replaced Stoltz.

6. His Reputation Goes Before Him

Or rather, his most famous character does. To pretty much all four corners of the planet, as it turns out.

Enthusiastically pointing out that complete strangers still refer to him as Marty McFly, probably the most unexpected episode of this instant recognition came when Fox found himself in a very remote location. 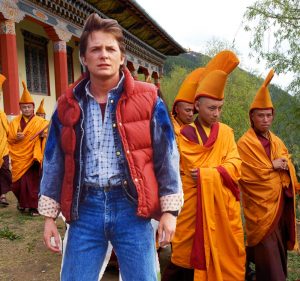 As remote as a jungle in the South Asian country of Bhutan which lies in the eastern Himalayas, for example. No idea why he was there, but he was. And where amongst a group of Buddhist monks who passed him, one looked at Fox and shouted, “Marty McFly!”

Whilst filming one particular scene from Wild West-set ‘Back to the Future III’, Marty was in the process of being hung by Buford (who Biff was supposedly a descendent of, if you cast your mind back that far). 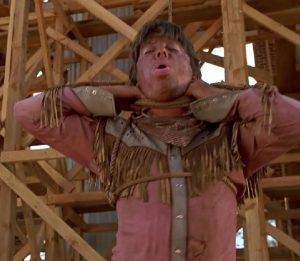 The story goes, that between takes, Fox let go of the rope accidently, and very nearly hung himself!

4. Fox’s Marriage Is Decade-spanning Too!

While longevity of relationships isn’t always a Hollywood trait, the opposite can be said of Michael J Fox and his wife of the last three decades, Tracy Pollan. Having first met on the set of ‘Family Ties’ (where she played his on-screen girlfriend), Fox couldn’t make his move, due to Pollan already being in a relationship. 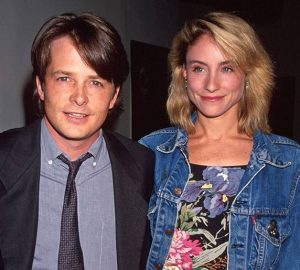 However when their paths crossed again a few years later on the New York set of ‘Bright Lights, Big City’, both were single and ready to mingle. Talking to chat show host, Oprah about this opportunity, Fox said; “By the time the movie was finished, we were on vacation together – and less than a year later we were married.” A relationship status which has remained the same ever since.

Rumour has it that between the filming of ‘Back to the Future’ and its two sequels (roughly a period of 5 years), Michael needed to brush up on his skateboarding skills.

So much so, sources revealed that Marty McFly had to re-learn all that he’d once known to resume the role. 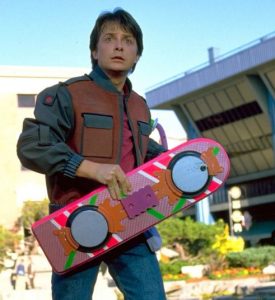 Of course, there is the line of thought which suggests Fox was confident that hoverboards would have been invented by then, so resigning the skateboard to the pantheons of history. But then given the whole premise of the trilogy, there was always the outside chance Marty would have to use a conventional skateboard again.

2. Back in The Future

Fox made a triumphant return to our TVs in the mid-1990s in the guise of Deputy Mayor Mike Flaherty, starring in some 100 episodes of the political sitcom aired on the ABC network, namely ‘Spin City’.

Sadly he was forced to retire on account of his Parkinson’s making it increasingly difficult for him to portray the character. 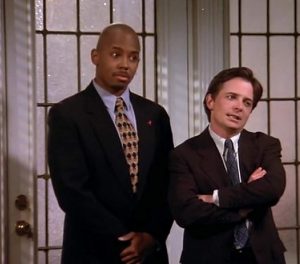 With reference points to Fox’s first television break, ‘Family Ties’ aplenty, there was a nice dovetailing of Michael’s (then) TV career to date, which served as a poignant reminder to just how far Fox had come. With or without that time-travelling DeLorean.

1. Not Even the Hill Valley Telegraph Can Avoid Fake News!

Read all about it! Yeah, not even Michael J Fox can escape internet hoaxes, as proven earlier this year when news spread online of the actor’s tragic demise at the age of 57.

Not the first, nor the last time a high profile celebrity has been wrongly touted as no more, as both Justin Bieber and Miley Cyrus would themselves admit. 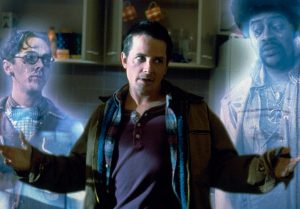 A very much alive and kicking Fox put pay to these ridiculous and unfounded rumours (apparently spun by a bogus website purporting to be Yahoo News), simply by tweeting to his followers via the micro-social network.

Not that some folk bothered checking his timeline to discover the truth!