As a child growing up in the late 1970s and 1980s it’s fair to say I was spoilt for male role models to both look up, and aspire to. A veritable smorgasbord of testosterone-fuelled masculinity was taking Hollywood by storm, as a fine body of male leads were stealing movie scene after TV scene. If you were a young lad, you wanted to BE Bo and/or Luke Duke, Templeton Peck, Michael Knight, Colt Seavers, Bo ‘Bandit’ Darville or indeed, pretty much ANY character portrayed by the awesome Harrison Ford. Conversely, if you were a girl, you wanted to date many from the abovementioned list, but especially, Indiana Jones and/or Han Solo. 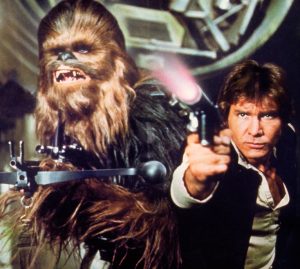 From Han Solo to Indiana Jones, Ford was omnipresent on the silver screen throughout my own formative years, yet it wasn’t just in iconic films of my generation such as ‘Star Wars’ and the ‘Indiana Jones’ franchise, respectively, where he commanded the viewer’s attentions.

Making the roles of Rick Deckard, Jack Ryan and Col. Barnsby his own, Ford’s screen time ensured the likes of Blade Runner, Patriot Games and Force 10 from Navarone were also significant box office draws from the 70s through to the 90s and beyond. 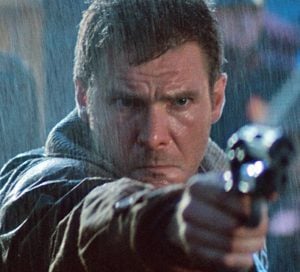 And even once the cameras have stopped rolling, Ford continues to be seen as a man of action, and something of a real life hero too. Take for instance when he successfully crash-landed one of his own private aircraft on a golf course back in 2015. In the aftermath of which he seemingly got out, dusted himself down and walked off. 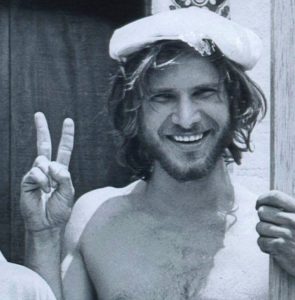 Well, not quite. He was in fact stretchered away after suffering minor injuries when his vintage plane came down after reporting engine failure soon after taking off from an LA airport, yet his heroics avoided any other casualties on the ground. “He risked life and limb by putting it down on the golf course instead of trying to go further to try to get back to the airport. Another 25 to 30 yards and … I don’t want to think about it. He saved several lives,” said one golfer and eye-witness at the scene.

But that’s just one episode though (there were plenty more besides), and beneath we take a look at 10 other things you may or may not have known about Harrison Ford before now;

10. Ford Doesn’t Need to Search for the Hero Inside Himself

From saving a woman from an RTA in California after her car had flipped off the road, to assuming the role of directing traffic and removing debris in the immediate wake of a pile-up in the Queens-Midtown Tunnel, Harrison Ford seems to be the fifth emergency service in America. 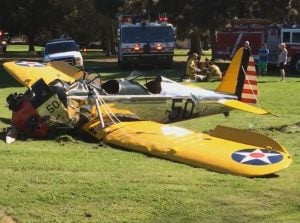 And even when he’s a long way out of the city, Ford still finds time to don his red cape and do his bit for boy scouts who are lost in the Yellowstone National Park; courtesy of spotting the elusive 13-year old while flying his helicopter around Wyoming in 2001. And if that wasn’t enough good samaritan’ing for one lifetime, Ford has also responded to SOS calls from two stranded hikers suffering from altitude sickness on the pinnacle of Table Mountain. Not to mention remaining calm and reassuring even when one of the hikers decided to vomit in his helicopter.

When most other men of his vintage (and wealth) might have reached for the Porsche or vineyard brochure, 55-year old Harrison Ford instead decided to regress to a more teenage period. And decided to get his ear pierced. 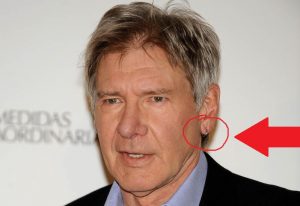 The spontaneous act came the morning after the lunch the day before, when he had enjoyed eating with close friend, Jimmy Buffet. Over the meal he apparently developed a case of ear stud envy, so the very next day he and his (then) wife hot-footed it to a Los Angeles branch of ‘Claire’s Accessories’ and had his ear pierced. What’s more, he didn’t even flinch, according to the assistant who carried out the procedure.

8. Cheers. But It Transpired That Not Everyone Knew Harrison’s Name

While a still relatively unknown (but up-and-coming) young actor, a colleague of Ford’s on ‘Star Wars’ – a certain old school actor of great repute, going by the name of Alec Guinness – habitually struggled to recall Harrison’s moniker. 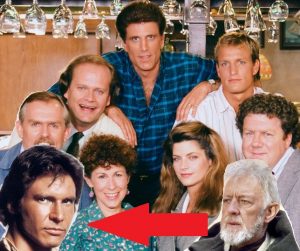 “Ford. Ellison? No! Well, a rangey, languid young man who is probably intelligent and amusing,” was the most fitting description Guinness could afford, er, Ford, when attempting to describe the chap in question to others on set, so the amusing story goes.

7. He’s Familiar with the Layout/Tributaries of The Shropshire Union Canal

Yes, as highly implausible as that sub-header may sound, it’s actually true. Back in 2006 Ford was spotted at various locations in and around Chirk Marina in North Wales here in the UK, on a narrow boat which he’d hired for his hollibobs. Joining him on his unlikely odyssey to the Midlands/North Welsh waterways was his (then) wife, the Ally McBeal actress, Calista Flockhart; and the young son they had together. 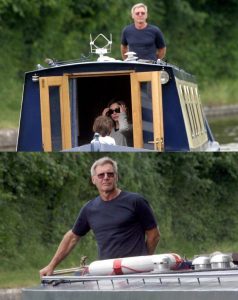 During their tour of this part of a very familiar corner of the world, the Fords also found the time/inclination to pop into that year’s Llangollen International Eisteddfod. Yet the icing on the cake for me, was when Harrison was later observed at the local Co-op stocking up on his sugar and black bin liner reserves. He loves narrowboats you see, and according to numerous legit sources.

6. Doors to Doors Salesman. And No. This Has No Reference to The Unfortunate On-set Foot-crushing Incident on ‘Star Wars: The Force Awakens’

In another ‘no-really, you’re-kidding-me’ revelation re: Ford, it emerges that he was employed as a stagehand to the 70s supergroup, ‘The Doors’ before he became a household name as a Hollywood leading man. Struggling to make ends meets as a budding thespian, a young and impoverished Harrison took up carpentry to supplement his meagre income. Which is far more interesting than waiting on tables, let’s be honest. 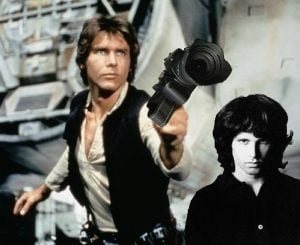 In turn this led to the opportunity to become both a stagehand and an impromptu cameraman for Jim Morrison’s rock outfit of legend. The connection was via a friend who just so happened to be making a documentary of the band, and who required an extra pair of hands on camera duties. Striking up a working relationship with Morrison at this time, it turned out to be relatively short-lived, with Ford telling an interviewer many years later; “I thought it was cool, I thought it was hip, but I couldn’t keep up with those guys. It was too much.”

5. He Has a New Species of Spider AND an Ant Named After Him

A long-time champion of conservation issues, Harrison Ford has spoken out for environmental concerns for many years now, and has been actively involved in promoting the ethics, beliefs and works of the charitable organisation, EarthShare. 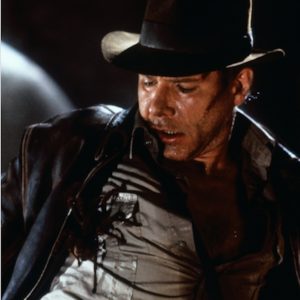 However in 1993 his support of this hugely important cause was acknowledged in a form which Ford found to be very fitting, when it was revealed a leading arachnologist had named a new species of spider, after the Hollywood star. Hence ‘Calponia harrisonfordi’. Not content with being honoured in spider form, nine years later he received another special honour, this time with his name being immortalised in a new species of ant; ‘Peidole harrisonfordi.’

As well as being instrumental in the rescue of a boy scout as mentioned earlier, Ford himself remains a real boy scout to this very day. Although not required to wear dodgy shorts or a woggle in public, nonetheless Harrison is an honourable Life Scout in recognition of his endeavours. 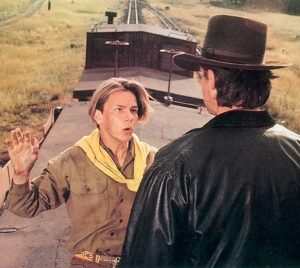 This represents the second-highest rank in the Boy Scouts of America, and culminated after working his way up through the ranks from his childhood in Illinois through to adulthood. That said, I’m not sure if he’s recruited to volunteer to mow neighbour’s lawns (or wash their cars) during the annual ‘bob-a-job’ week.

3. He Took All His Accidents/Stunts on the Chin

That scar on Harrison’s chin, well, there’s a story behind that too, as you might suspect. The by-product of an unsavoury incident which happened in the early 1960s when Ford had set off somewhere in his car, but hadn’t finished putting his seatbelt on. We know, naughty. 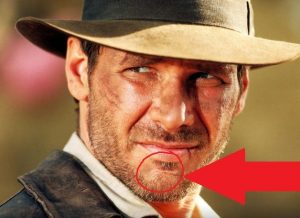 In the throes of buckling up, Harrison lost control of his vehicle and careered off the road and had his progress stopped rather abruptly by the onset of a telegraph pole. The speed of impact meant that Ford’s face hit the steering wheel, causing the cut which produced the enduring scar.

2. You Win Some, You Lose Some

Unbelievably, yet for all the mahoosive roles Harrison Ford DID sign up to (and proceed to make his own/write into Hollywood history), there were a glut of others which obviously didn’t appeal to him on different levels/ended up overlooking for various reasons. 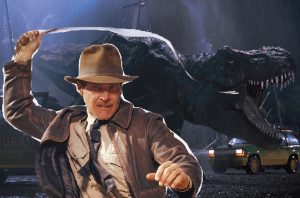 These included such future blockbusters as ‘Terms of Endearment’ (which resulted in Jack Nicholson bagging an Oscar for), ‘Beverly Hills Cop, Big, Die Hard, Ghost, Jurassic Park, Vanilla Sky, The Perfect Storm, The Patriot’ and ‘Proof of Life.’ Quite the rejection pile…..

1. He Ad-libbed Iconic ‘Don’t Bring a Sword to a Gun Fight’ Scene from ‘Raiders of the Lost Ark’

We all remember the one, where amongst many of the duals he involved himself in – willingly or not so – there was the episode where the crowds in a square clear to reveal the Egyptian dude with the impressive sword skills. 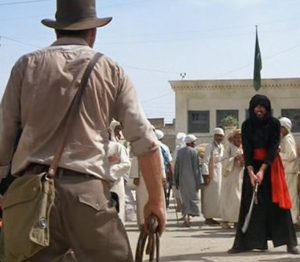 Yeah, well the bit where Indy decided to draw his pistol and shoot him rather than engage in any other form of mortal combat, was completely unscripted apparently. According to director, Steven Spielberg’s actual script, this was supposed to play-out as a longer scene, however Ford was suffering with sickness on the day of filming, so to save being needlessly physical, he simply shot his would-be assailant. Textbook Ford.