Sitcom spin-offs can be a dangerous business – for every Mork & Mindy there are three Joanie Loves Chachis. Even Cheers, one of the luminary sitcoms of its era, had a failed spin-off in The Tortellis.

Thankfully, Frasier – with the inimitable Kelsey Grammer in the title role – ended up becoming almost as famous as Cheers and remains a beloved comedy to this day. Here are some behind-the-scenes secrets you might not have known about the misadventures of everyone’s favourite radio psychiatrist. 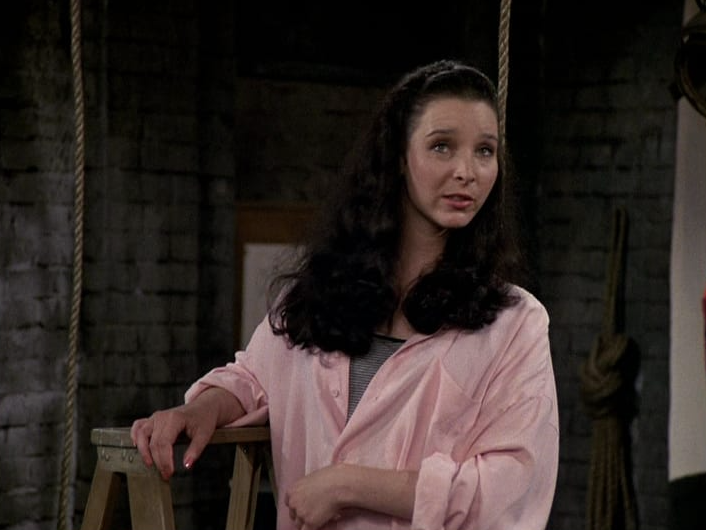 Things could have turned out completely differently for two major American sitcoms!

Lisa Kudrow (who famously played Phoebe in Friends) actually won the part of Roz Doyle, Frasier’s producer, after appearing in a 1989 episode of Cheers. She even attended several rehearsal sessions before filming of the pilot began and acted alongside Kelsey Grammer in the iconic role. 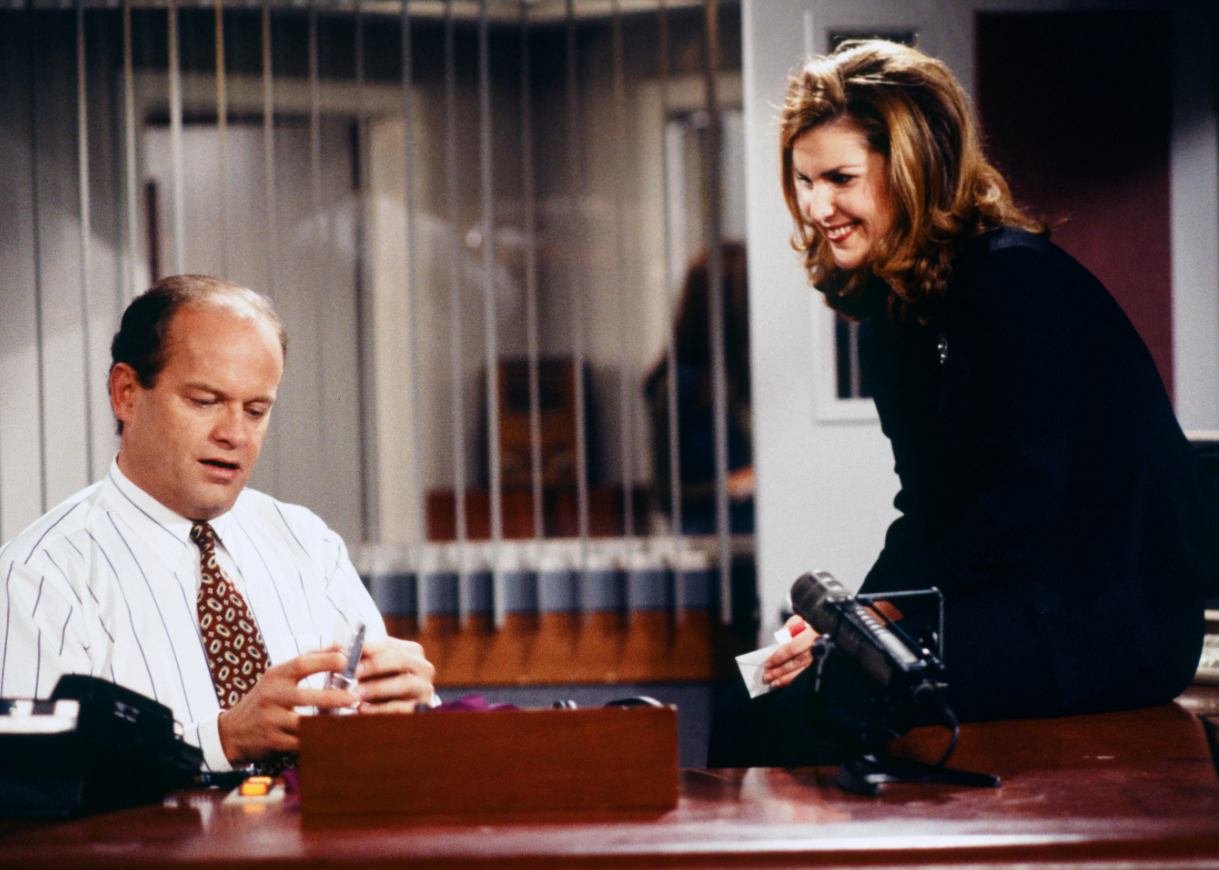 However, producers had a change of heart about Kudrow. They felt that she was an extremely funny actress but her personality wasn’t forceful enough to match Grammer head-on. Instead they needed a female ‘alpha’ and that’s when second choice Peri Gilpin received a fortuitous phone call.

Incidentally, Roz’s character is named after one of the producers of Wings, who sadly died of breast cancer in 1991.

9. Frasier was never originally supposed to be about Frasier Crane 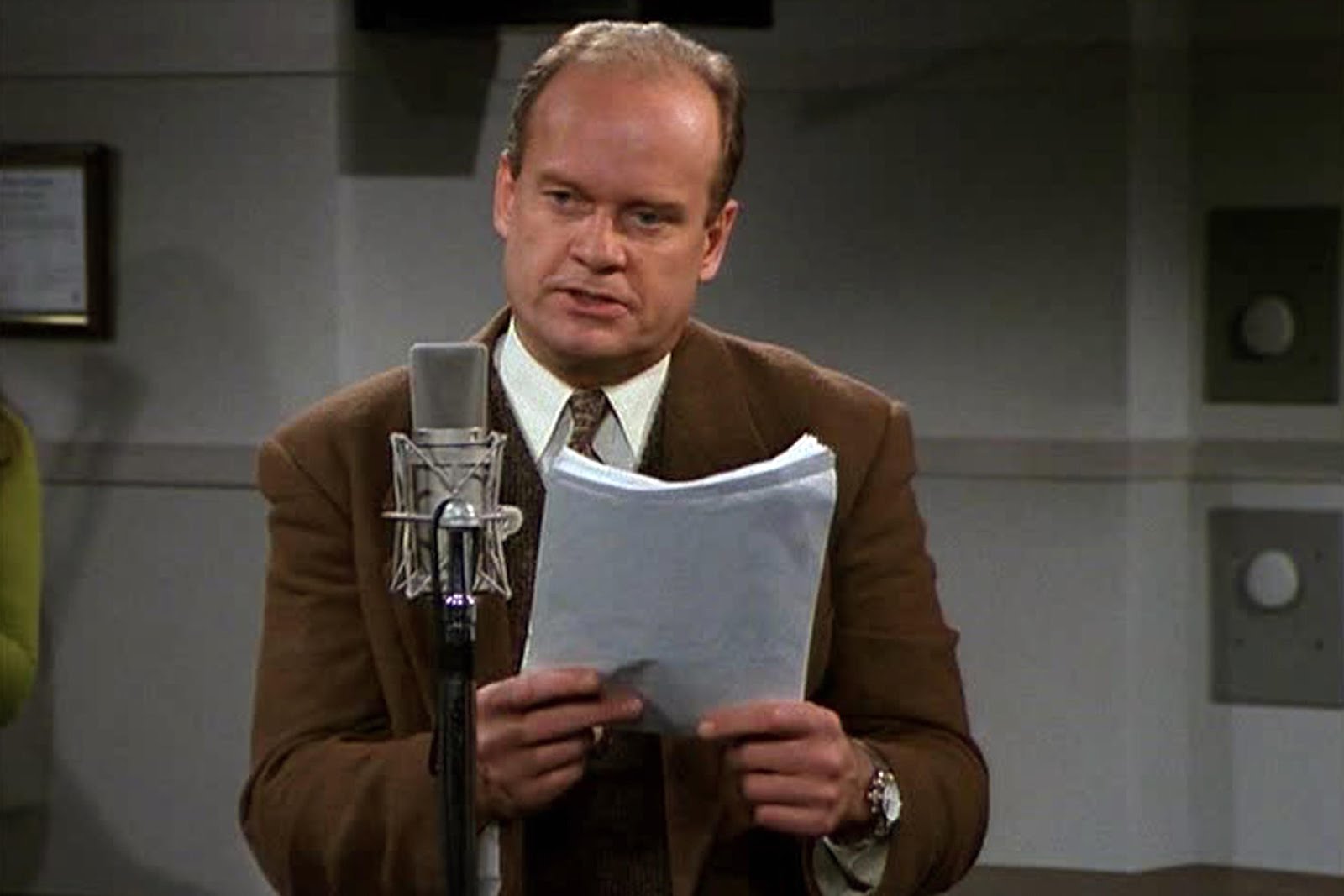 It sounds as though the whole idea for the series is in the series title, right?

Wrong! Believe it or not, Frasier was never actually supposed to be about Frasier Crane. Grammer and the show’s creators felt that a series revolving around Frasier would draw too many unfair comparisons to Cheers. 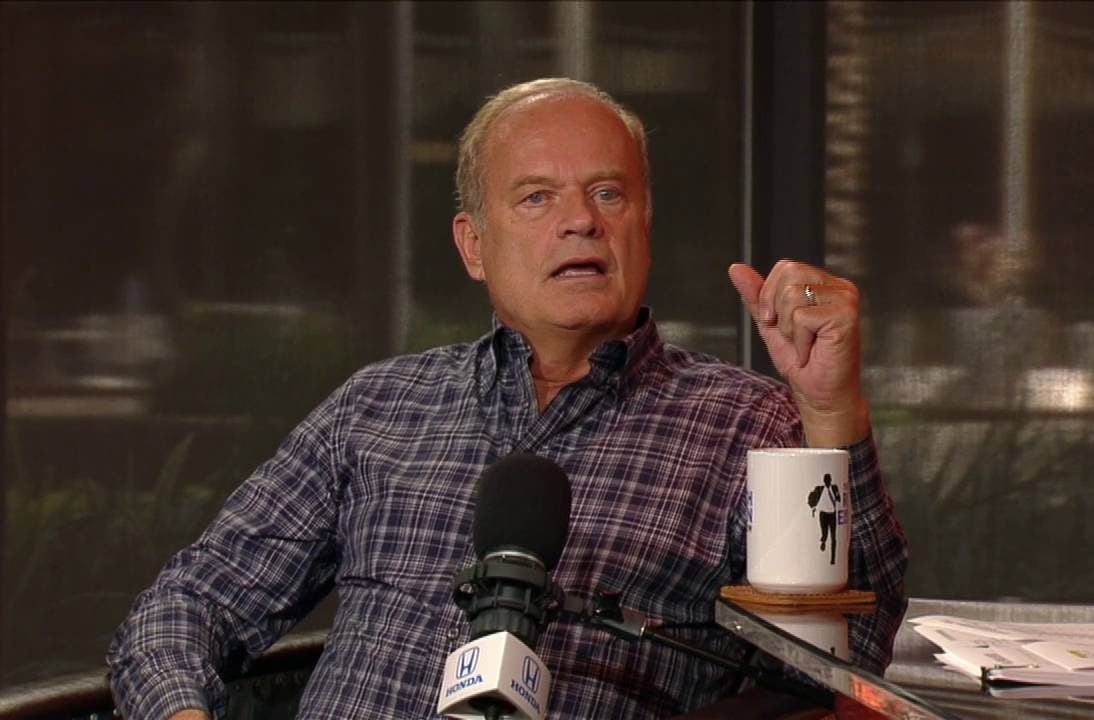 Instead, they decided to have Grammer play a paralysed medial mogul who was going to be cared for by a street-smart nurse in a fancy Manhattan penthouse. No, really! Frasier could have been a very different (and short-lived) series altogether.

Fortunately Paramount hated the idea and successfully convinced Grammer and the rest of the creative team that it would be wise to cash in on the enduring popularity of Cheers.

8. The show’s creators made sure to set Frasier as far from Boston as possible 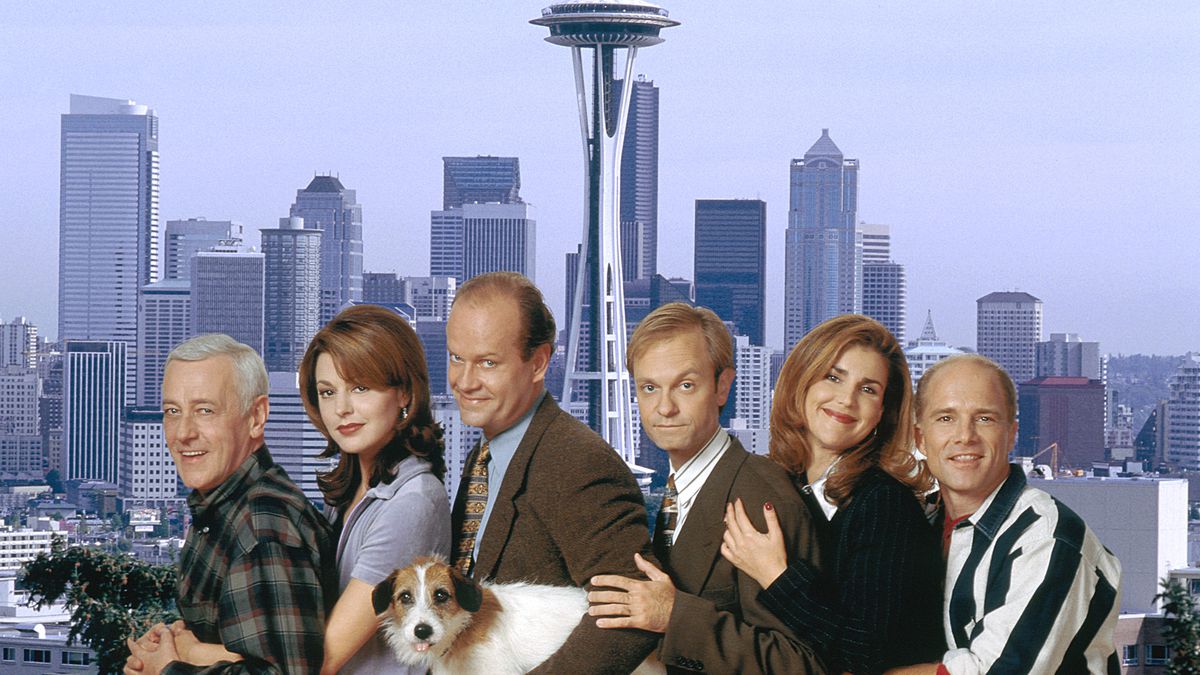 The show did manage to get a little bit of distance from the Boston bar.

The creators decided to set Frasier far afield to make the show feel fresh, new and very much separate from Cheers. They already knew that executives would want familiar characters to guest star in Frasier whenever possible. 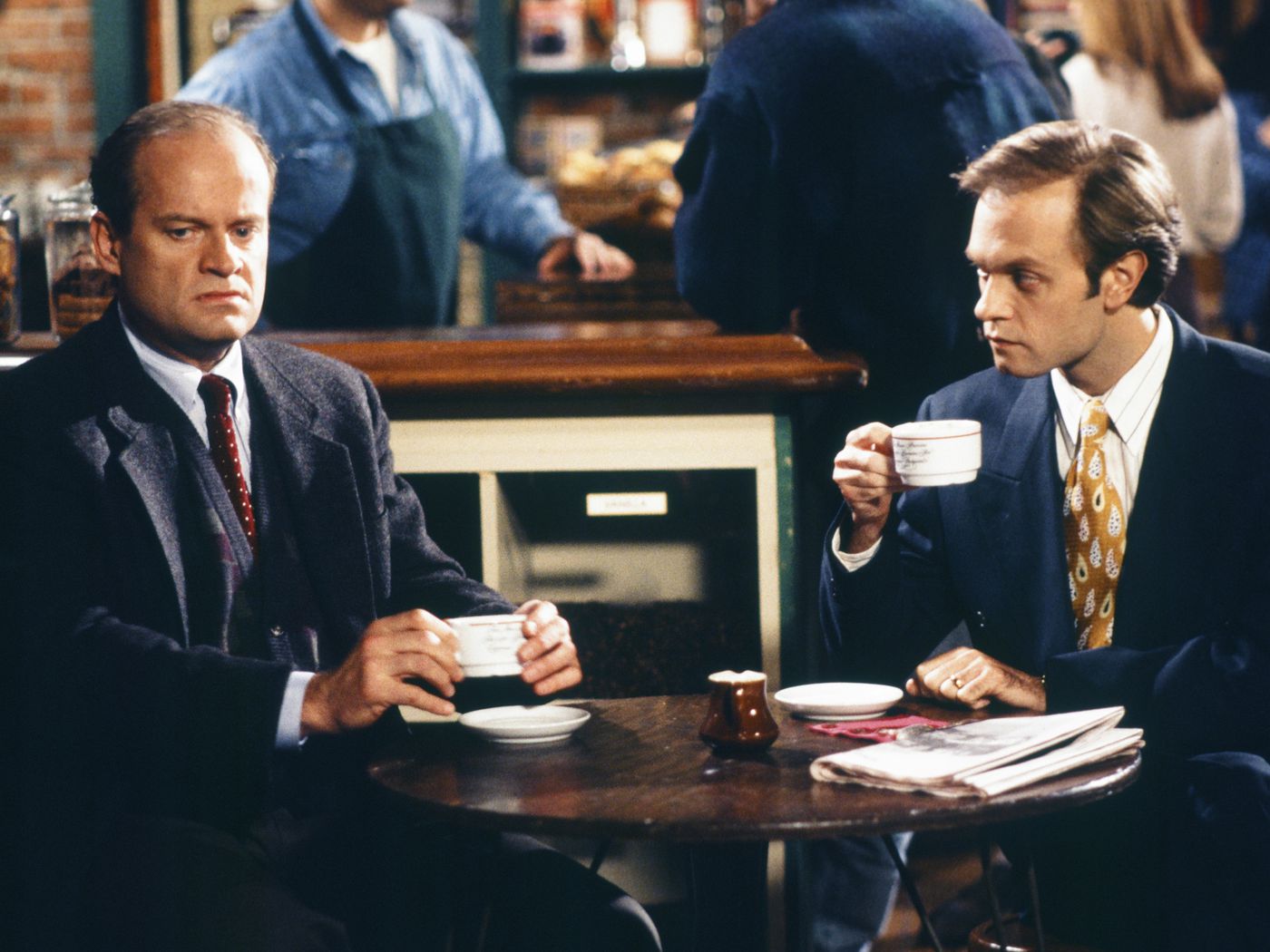 As a result, they settled on Seattle, literally on the opposite coast of the US, to minimise the amount of times Cheers characters could feasibly show up. Plus, the coffee scene in Seattle was just kicking off at the time, which gave all the main characters a perfect meeting place.

Incidentally, the show’s creators had originally planned on setting Frasier in Denver, Colorado. However, in late 1992 the state repealed a number of anti-gay discrimination laws and Frasier’s creative team disagreed with the move.

7. Kirstie Alley refused to appear in Frasier because of her belief in Scientology 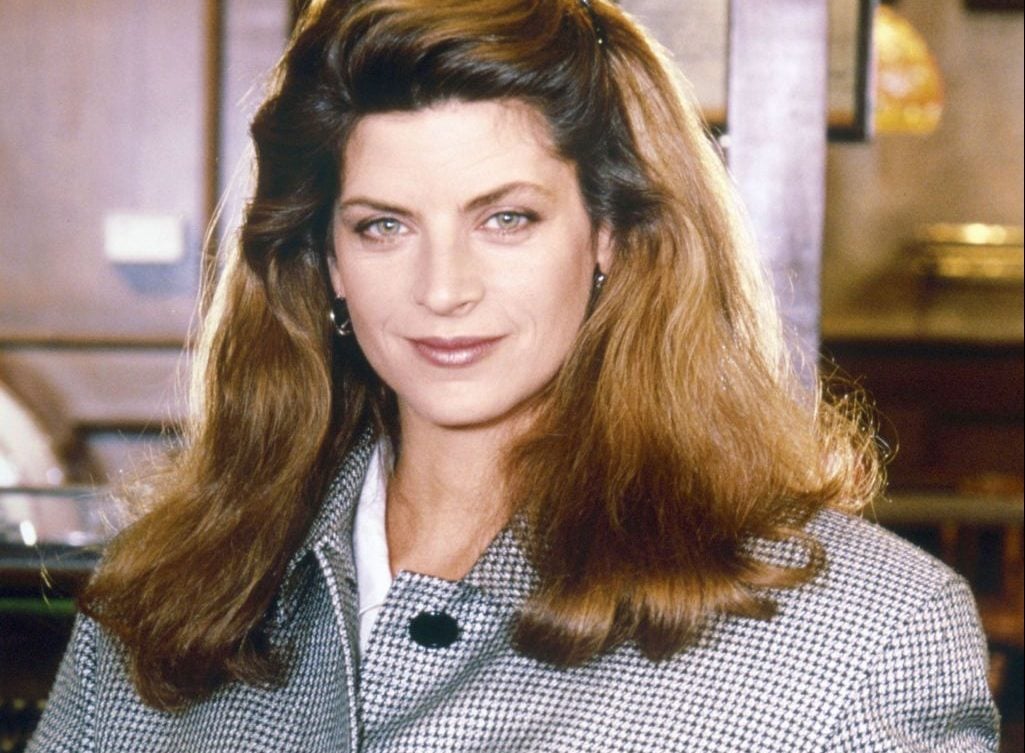 But despite being one of the most prominent cast members, Alley didn’t want anything to do with the show’s Seattle spin-off. She was extremely proactive about her dislike for Frasier and contacted co-creator David Lee before filming had even begun. 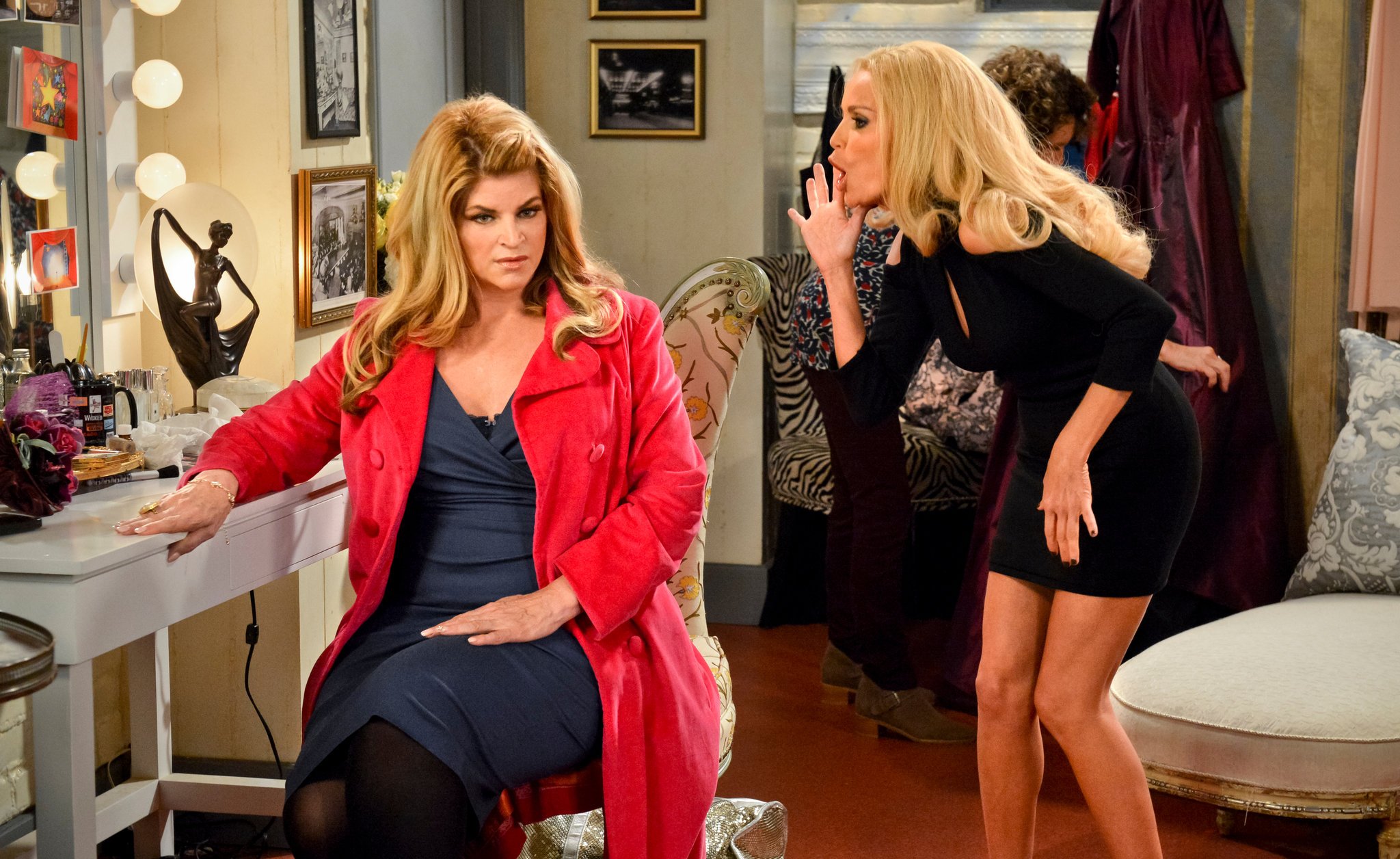 Alley stated that she couldn’t guest star on the series because she is a Scientologist and doesn’t believe in psychiatry. Lee responded coolly, “I don’t recall asking.” Yikes! Fortunately, several characters from Cheers did manage to make an appearance.

As Frasier’s ex-wife, Lillith made the most appearances but Sam (Ted Danson), Diane (Shelley Long) and Woody (Woody Harrelson) all stopped by to say hello.

6. Eddie the dog received the most fan mail out of any cast member 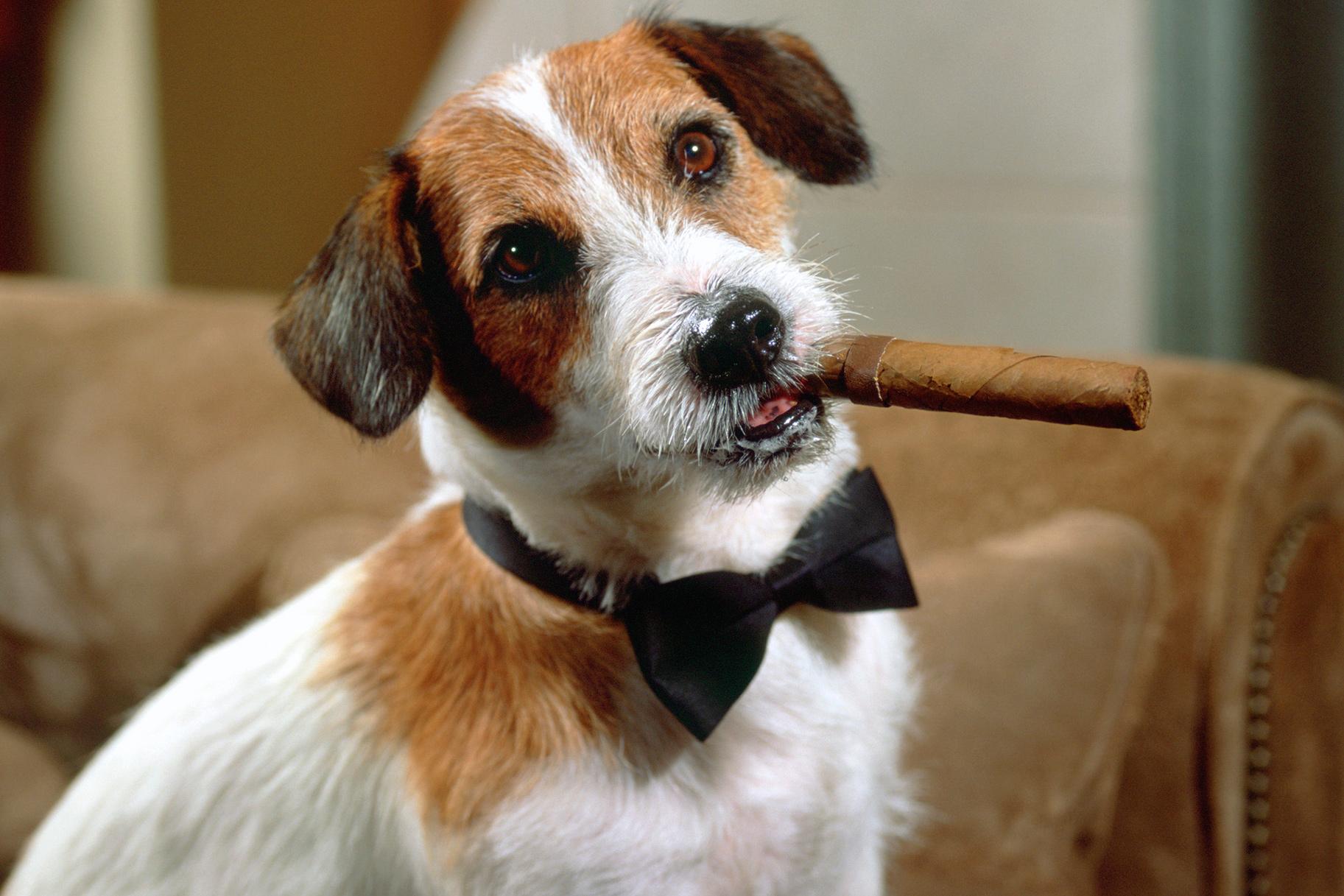 Who can forget everybody’s favourite pet, Eddie the dog?

It seems he may well have been the most popular cast member, because as soon as Frasier hit its stride, Eddie ended up receiving more fan mail than any of his human colleagues! He was also the only cast member to appear on the cover of Entertainment Weekly’s special report on the sitcom. 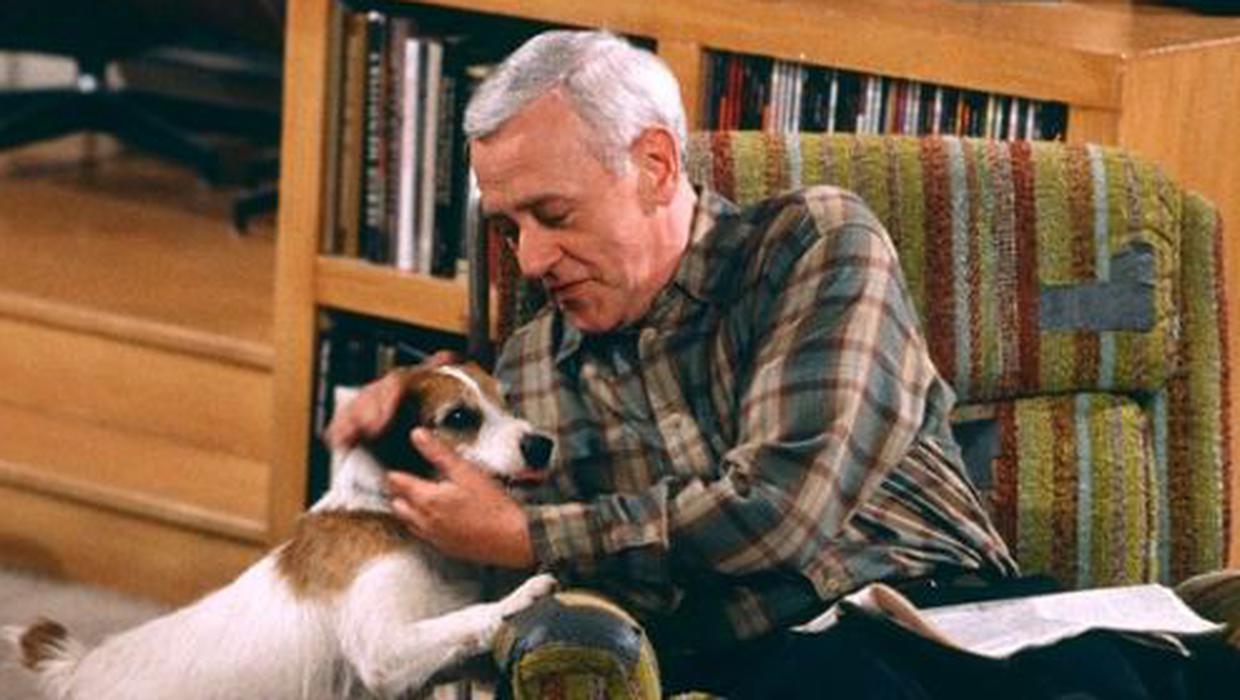 Eddie was played by a Jack Russell Terrier named Moose who had been given up to a rescue organisation. Mathilde de Cagny – a professional dog trainer – spotted him and decided he would be excellent on camera thanks to his boundless energy.

Producers went through several doggie auditions until landing on Moose, as he was the only dog able to ‘stare’ at Kelsey Grammer without flinching. 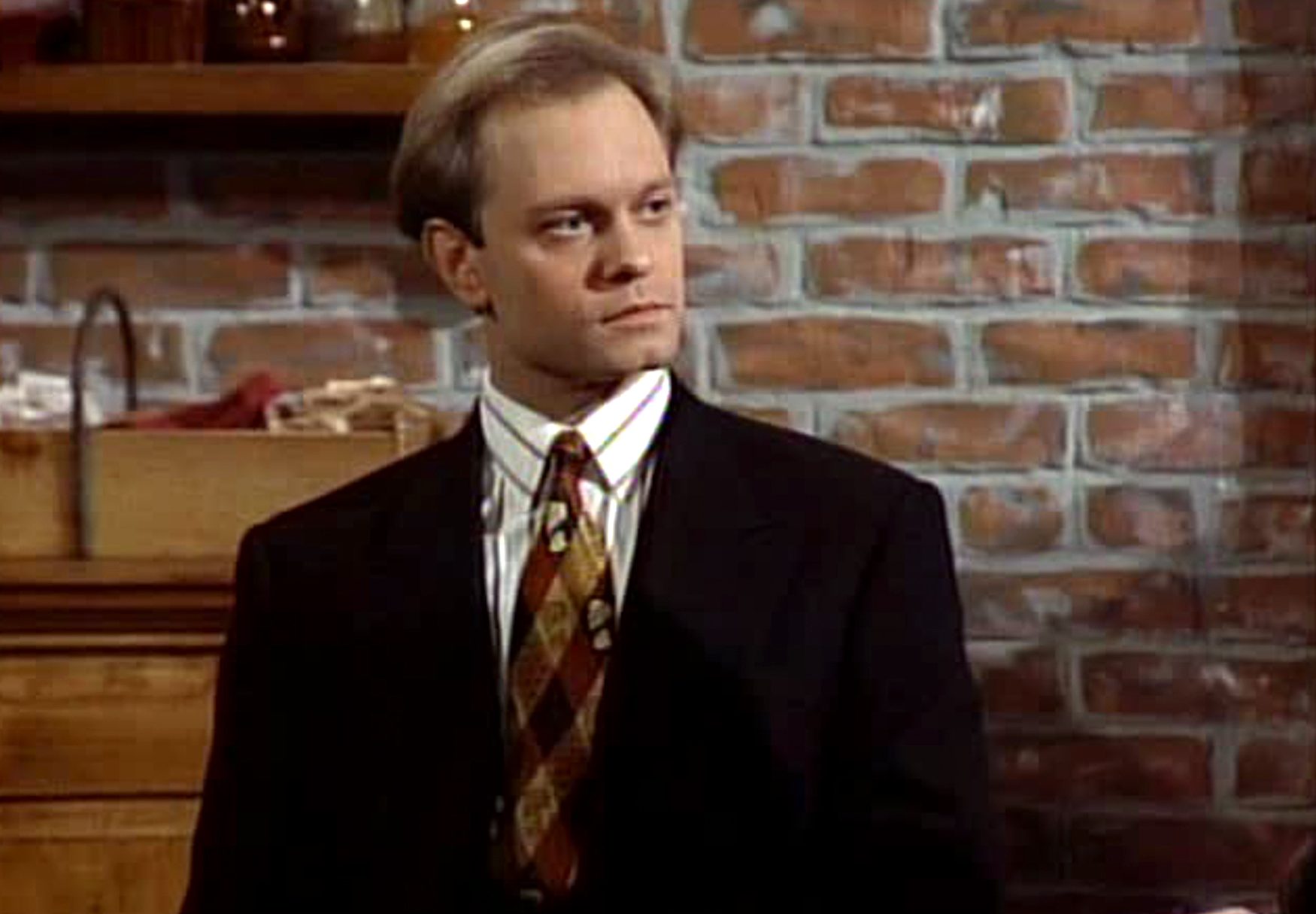 The character of Niles might never have existed if it hadn’t been for a photograph of David Hyde Pierce.

There was no plan to give Frasier a younger brother until an assistant casting director handed the show’s creators a photo of David Hyde Pierce and asked “Doesn’t he look like Kelsey did 10 years ago?” Executives were shocked by the resemblance and immediately got to thinking. 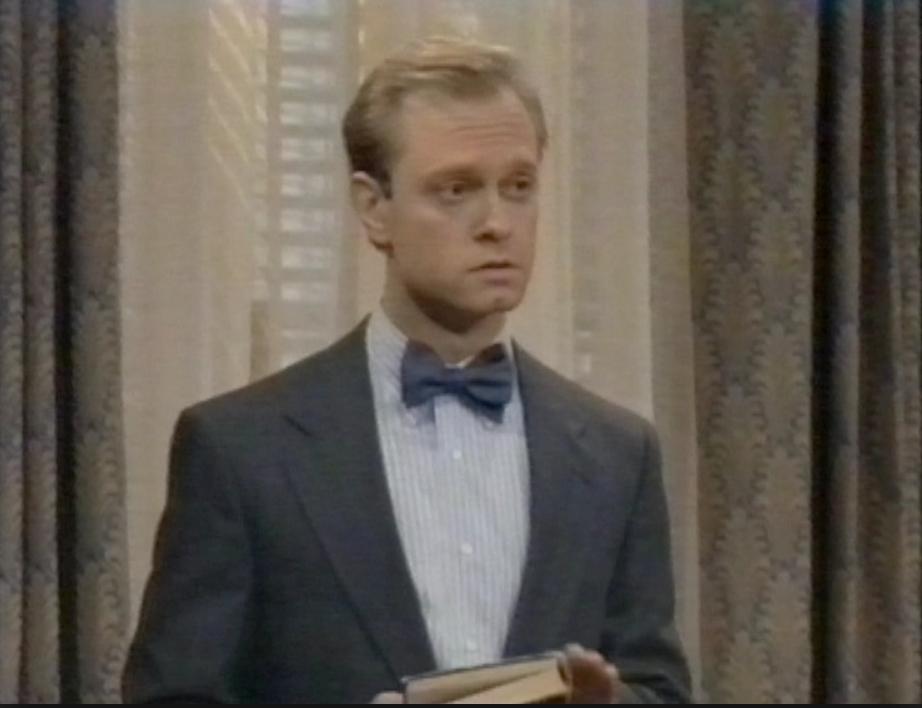 They did some research and found some old tapes of Pierce acting in a political sitcom called The Powers That Be as a shy and suicidal Congressman. A meeting was arranged with the actor and Pierce was swiftly offered the newly-created role of Niles Crane!

Now we can’t imagine a series without him!

4. Kelsey Grammer ended up playing Frasier Crane for over 20 years 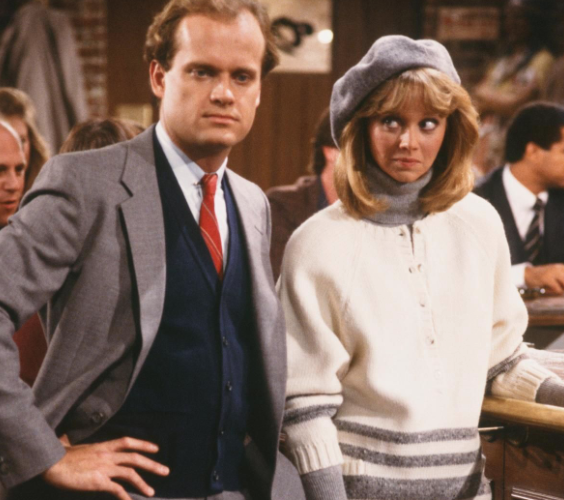 Kelsey Grammer has played the character of Frasier Crane for over 20 years!

If you include the time he spent on Cheers, the actor has been playing the loveable snob consecutively for two decades. This is a joint record with another TV actor, James Arness, who played Marshall Dillon on Gunsmoke for the same amount of time. 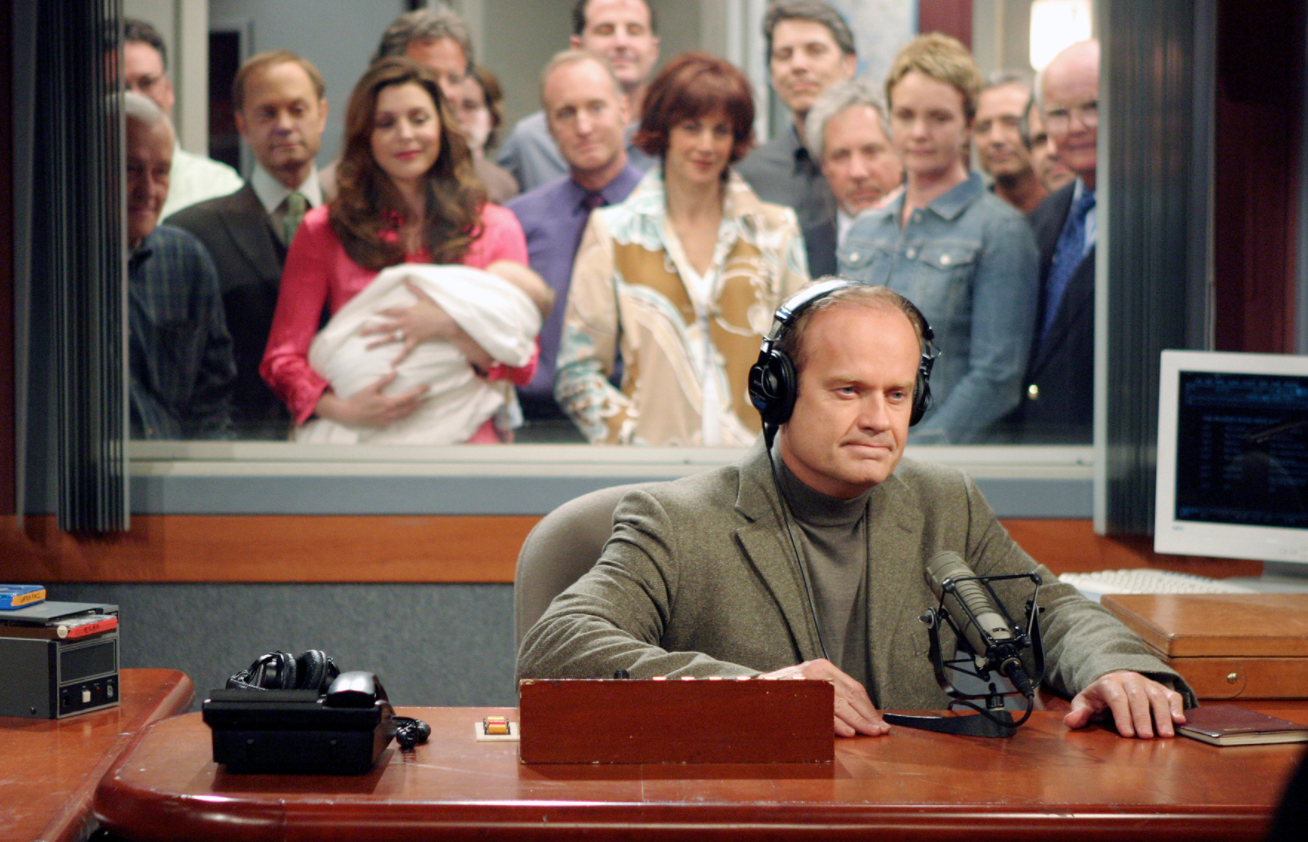 Apparently Grammer invited Arness to join him on a special appearance of The Today Show in 2004, but Arness didn’t want anything to do with it! It’s claimed he rejected the idea with a very short and sweet “f*** you”.

3. Jane Leeves had lessons with a voice coach to modify her accent 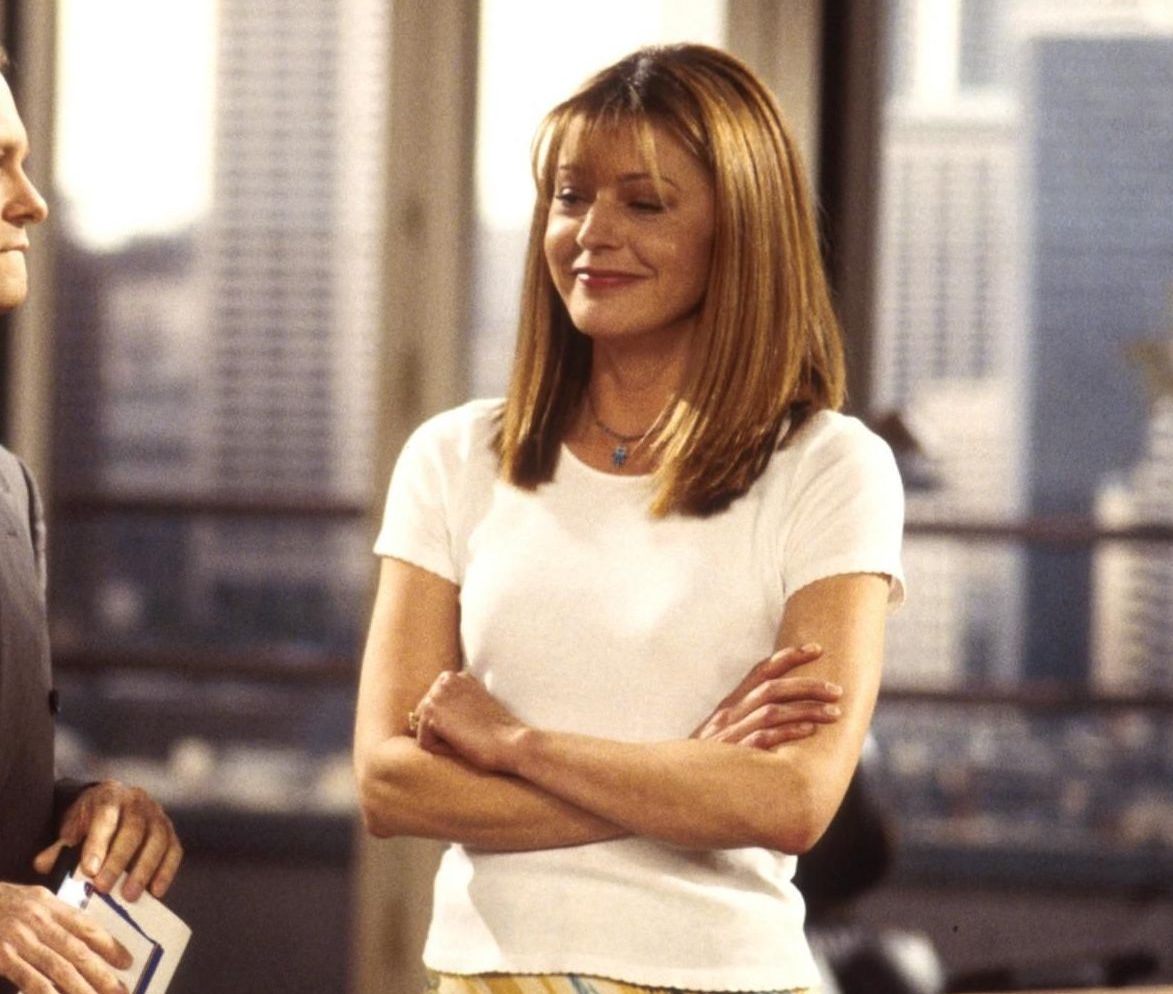 However, her accent drew a lot of criticism from British viewers. Daphne was supposed to hail from Manchester but Leeves grew up near London, meaning that her Mancunian accent on the series was somewhat affected. 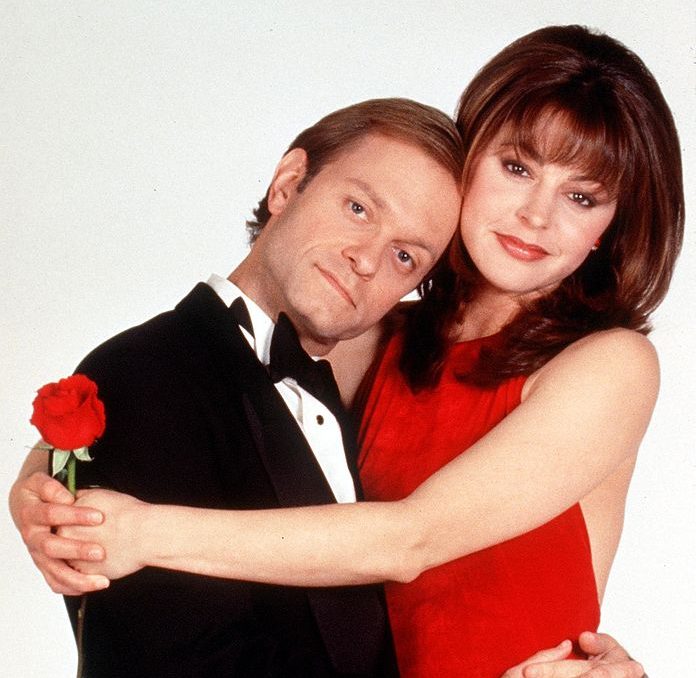 Leeves worked with a voice coach to make sure that US audiences could understand what she was saying, but sadly Northerners everywhere could never quite get over how bad the accent was. Funnily enough, John Mahoney (who plays Martin Crane) originally hails from the North West of England.

He grew up in Manchester but emigrated to the US when he was 19 years old and slowly got rid of his British accent. What a weird coincidence!

2. Moose (the original Eddie) was brought onstage for one last performance in the final episode 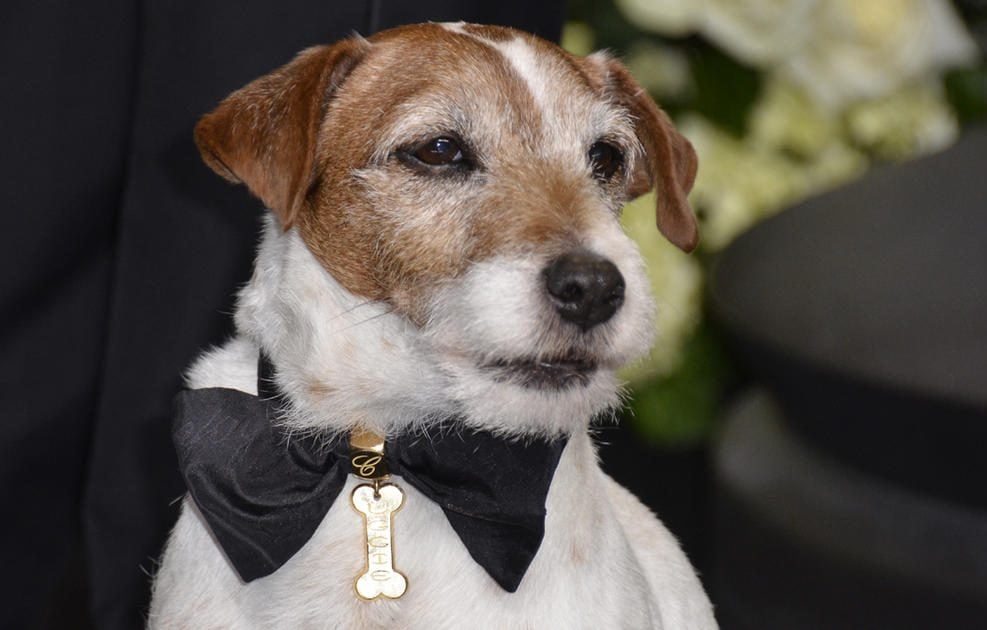 Moose was almost fourteen years old by the time Frasier came to an end.

By this time he had been replaced by a younger dog, but Moose would always be the original Eddie and decided to make a cameo for the final episode of the sitcom. Moose’s fur was snow white and the dog was almost completely deaf, but his trainer carried him on-stage after the final episode to take a bow with everyone else. 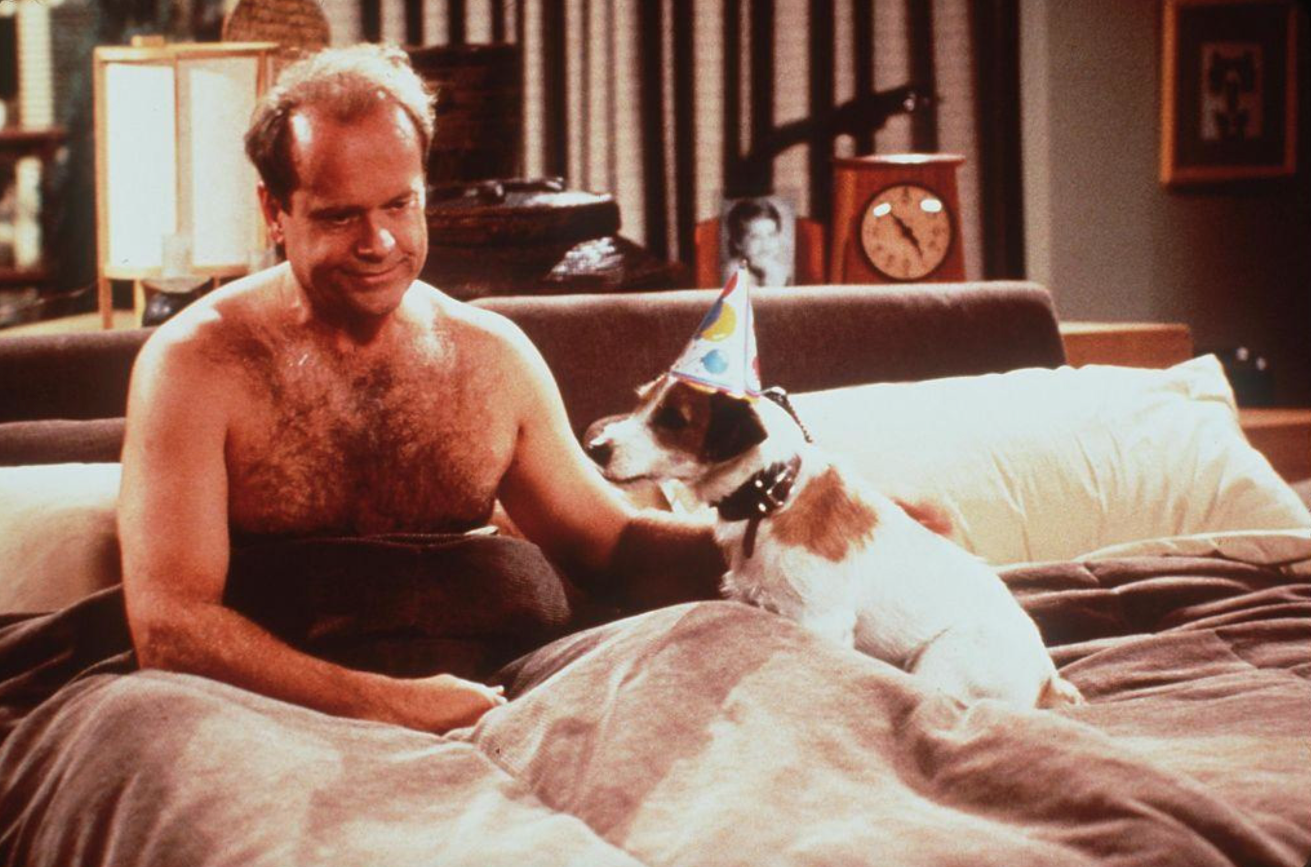 Pierce later said that it was one of the most emotional points in the evening. Apparently Moose was able to recognise the set and even reacted to the audience’s applause for one last time. We’ve got tears just thinking about it!

Moose eventually passed away in June 2006.

1. The 1,000th episode of the show is the only one that was filmed in Seattle 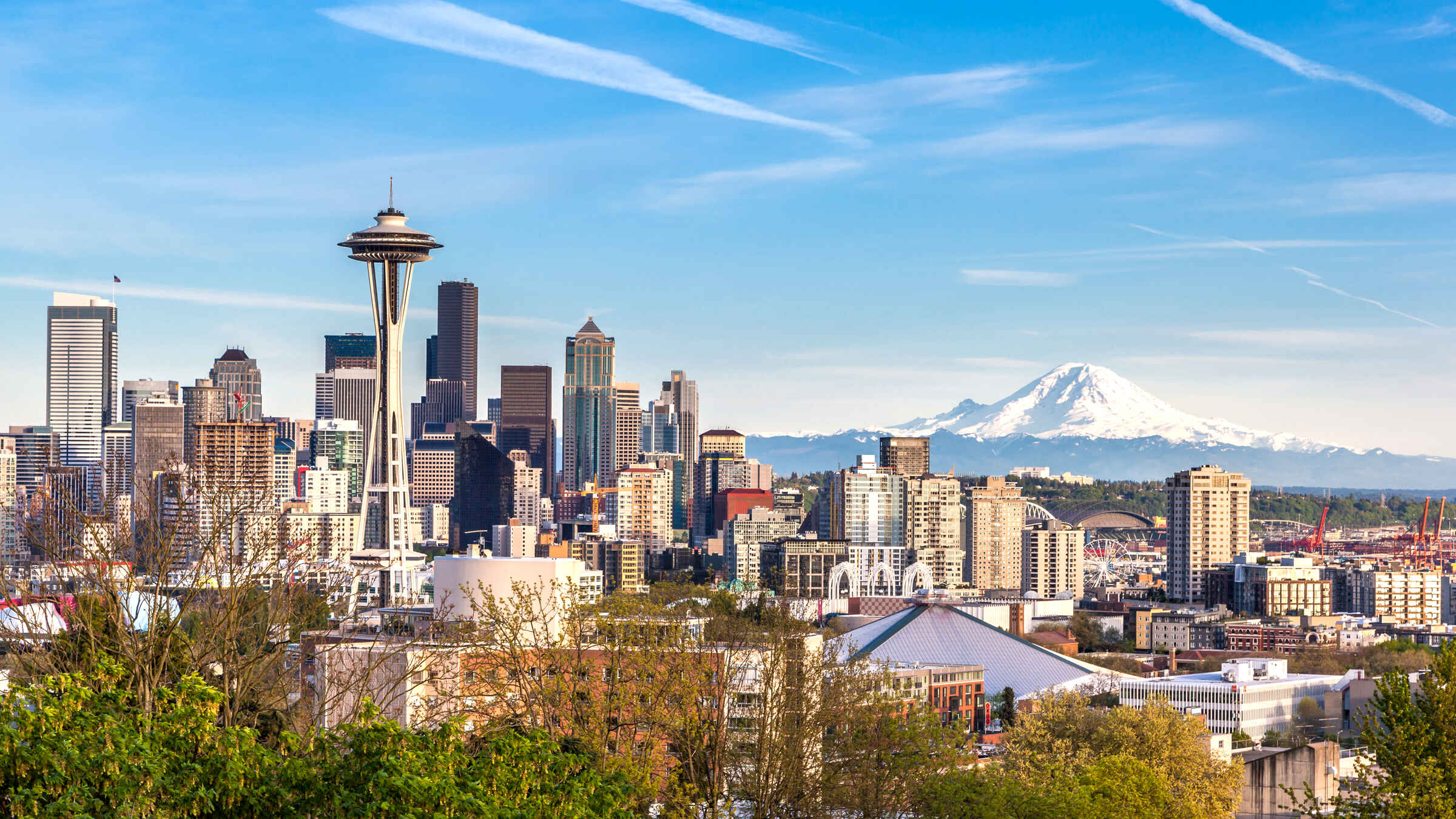 The city’s distinctive outline appears in the title credits and the whole coffee culture that sprung up from there created a great setting for the main characters to inhabit. However, only one episode of the series was ever filmed in the city. 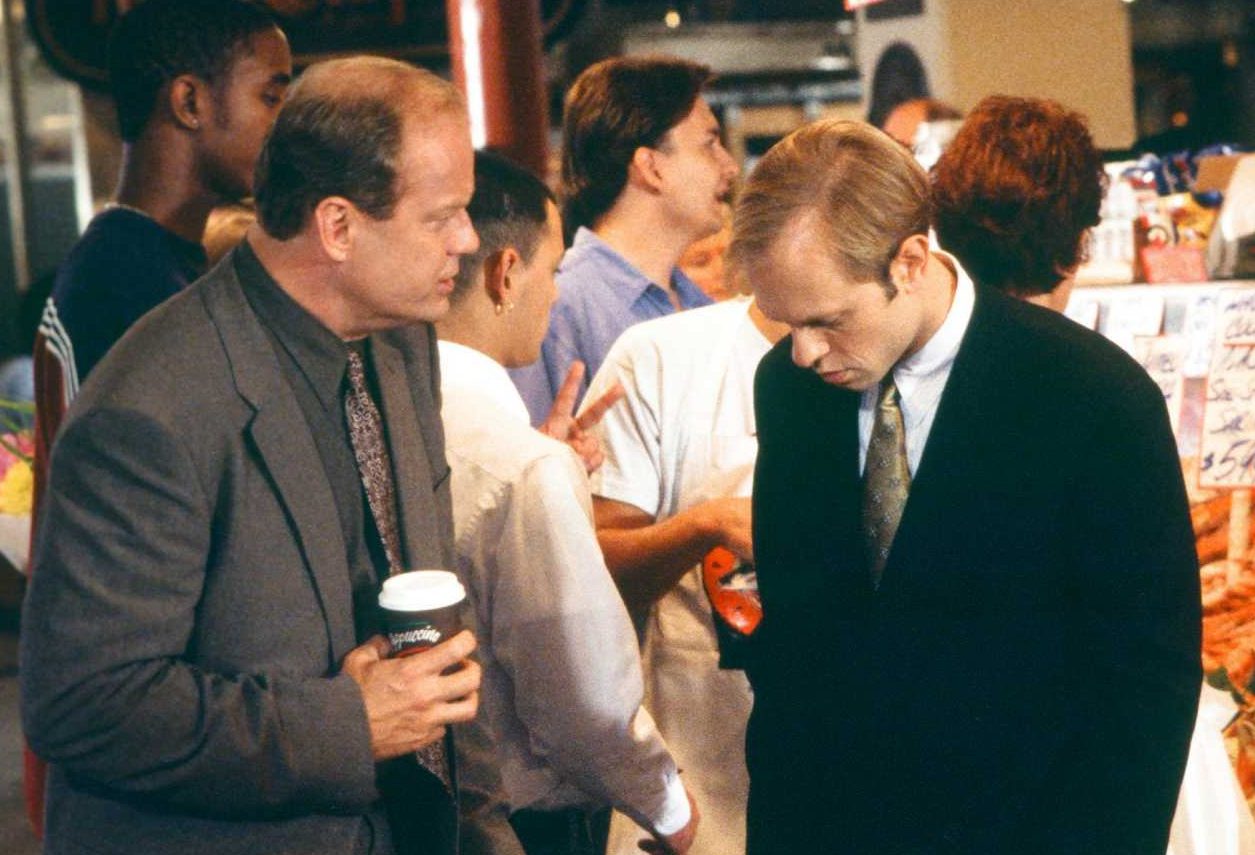 The 1,000th episode of Frasier is the only one to be filmed on the streets of Seattle. You can watch Frasier and Niles riding the Monorail, walking through Pike Place Market and even standing in front of the iconic Space Needle.